The captivating work of Menorcan architect Emma Martí convinced Anna Truyol to design together this new space, inspired by the new company values and Anna’s personal experience as a creator of unique universes and group coach. The choice of the building was also crucial: the first girls’ school in Sant Lluís, a small village in the southeast of the island. It was a listed building, built in 1900, but completely abandoned. 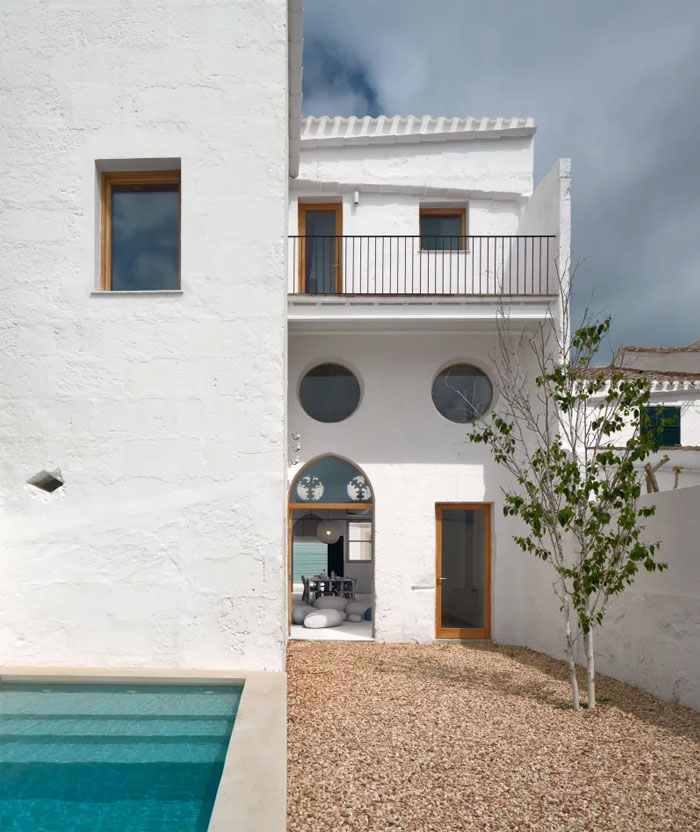 Anna Truyol and Emma Martí’s goal was a minimal, non-invasive intervention that would preserve the history, experiences, and soul of the space. In one example, the marés (local stone) walls, full of imperfections, were left in their original state and painted white to preserve the texture of the wall. “In this way, they continue to have life,” they explain. 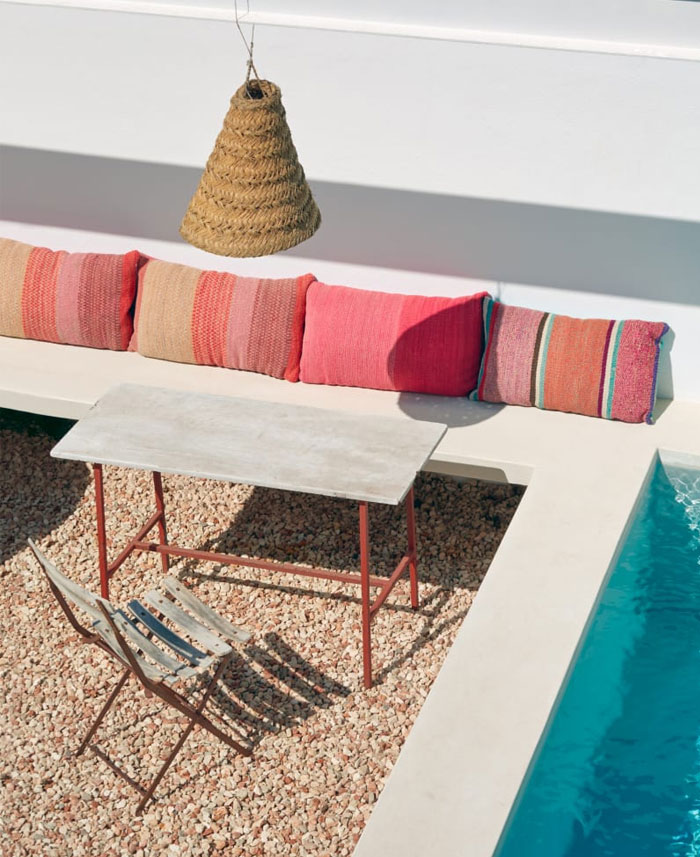 To achieve diaphanous spaces, defined by the character of their materials and especially by their volumes, all the elements that were not typical of the original building were eliminated. This first intervention resulted in two open spaces, distributed over two floors, very spacious and bright, allowing the introduction of the essential elements for the new use. The purpose of the intervention was to obtain warm, welcoming work spaces that invite sharing and encourage creativity and open-mindedness. The first floor was designed as a living space and kitchen with access to an outdoor patio. 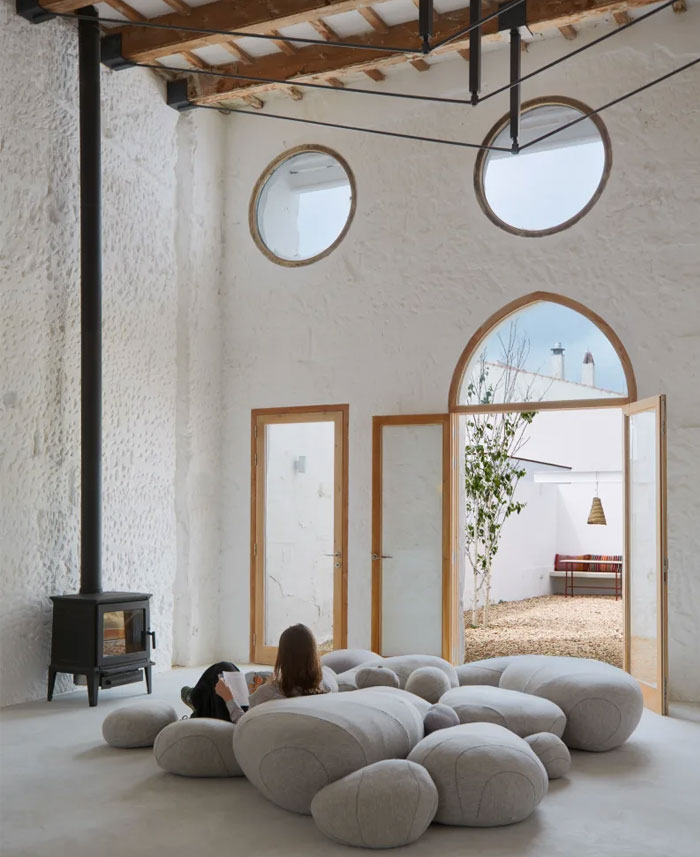 The interior features custom-designed kitchen furniture in lacquered wood and a combination of tables of different formats, designed by Artchimboldi, which together create an extensive surface for meals, meetings and work areas. A 4×4 meter slate, designed by the project managers and custom-made, is a nod to the building’s past and is a characteristic feature of Artchimboldi, an unexpected piece that awakens illusion, participation, and creativity. An antique bookcase welcomes you inside, and a sitting area with poufs allows you to create a cozy space for relaxation and reading. Once outside, the patio has a swimming pool designed by Emma Martí and covered with off-white microcement. 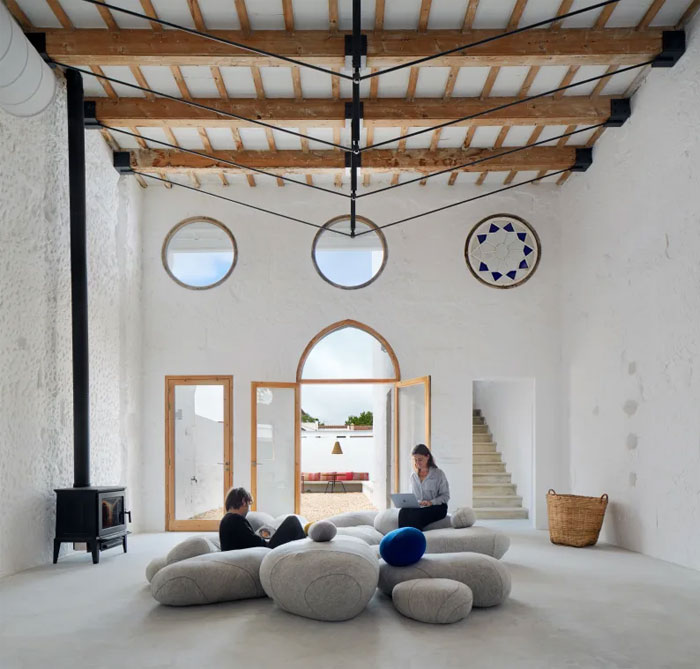 All installations are concentrated in the kitchen and bathrooms area, from the first floor to the roof floor. The appearance of the reinforcements in the first floor ceiling with Fink beams was a decision taken during the construction work, once the partition walls were removed.
The ceilings have been maintained, resulting in spaces up to six meters high, with wooden beams and slats and quarter-timber beams. This height is emphasized by the intervention of several objects: a large ceiling lamp or the chimney flue pipe that rises to four meters. On the first floor, a polished concrete floor was chosen, which did not seek a perfect finish. 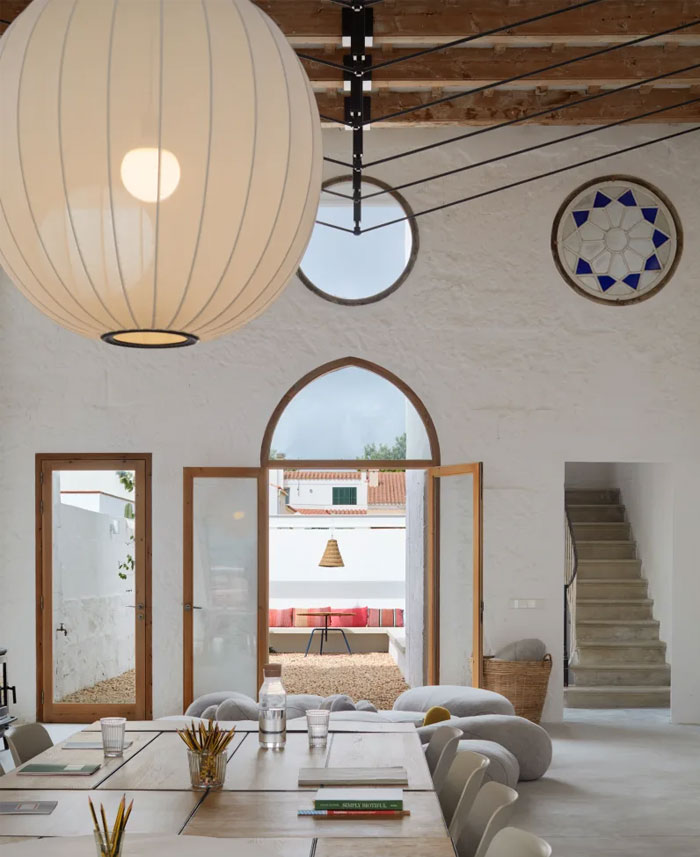 The upper floor is designed as a rest area. At the beginning of the project, many rooms with bathroom sink were planned, but it was still a conventional intervention. Based on Artchimboldi’s creative philosophy, eight sleeping cubes made of Flanders pine, two doubles and six singles, dressed with organic cotton and wool futons, linen sheets and curtains. A ladder allows access to the roof of the cubes, where it is also possible to sleep. 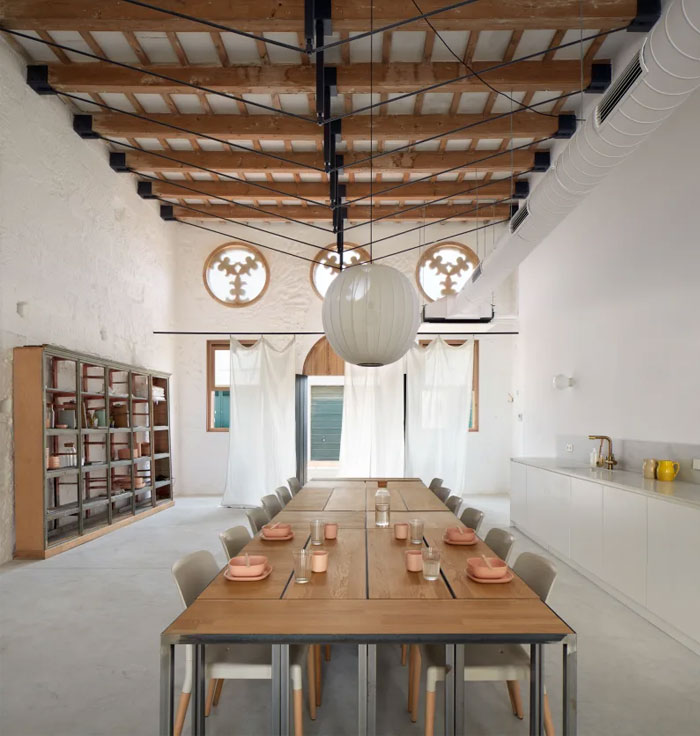 A space under the bed allows storing suitcases, shoes and personal belongings. This storage space, together with a custom-made bookshelf designed by Anna Truyol, simplifies and makes the use of the furniture more flexible. On the second floor, the different existing flooring that outline the different rooms of the original building were preserved. 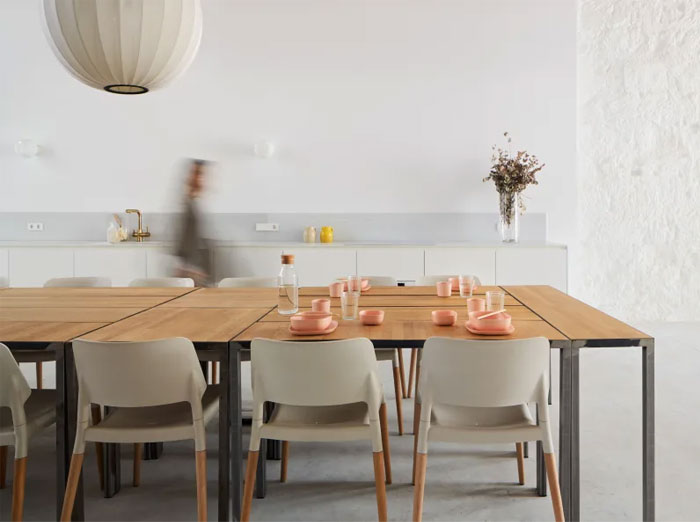 The roof was completely rehabilitated, waterproofing it, insulating it thermally and generating light inputs to the second floor. On the one hand, the project is based on recovering and enhancing the original character of the building (maintaining the textures of enclosures, floors, ceilings, façade holes, carpentry… especially the blue glass of one of the rose windows); and on the other hand, on making a totally differentiated intervention, using pine wood as the new texture of the project. 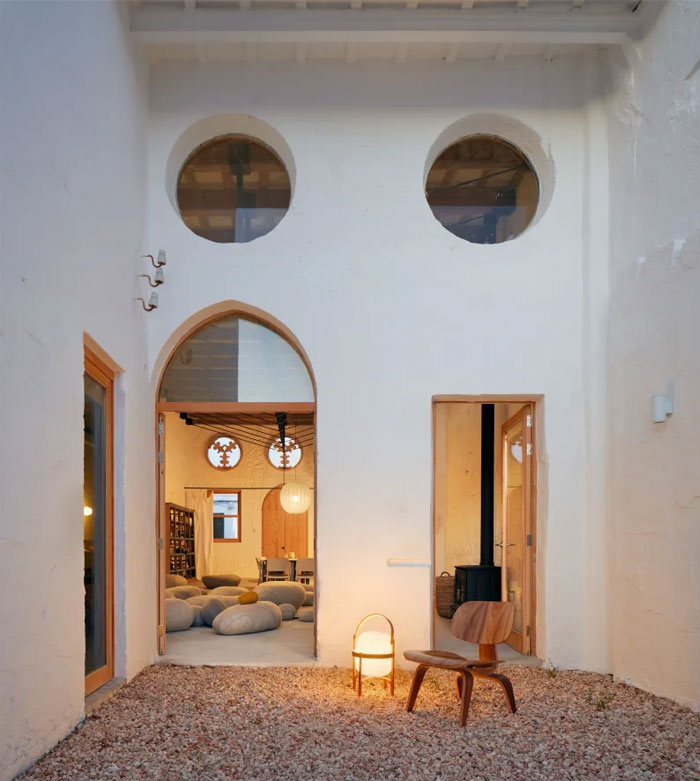 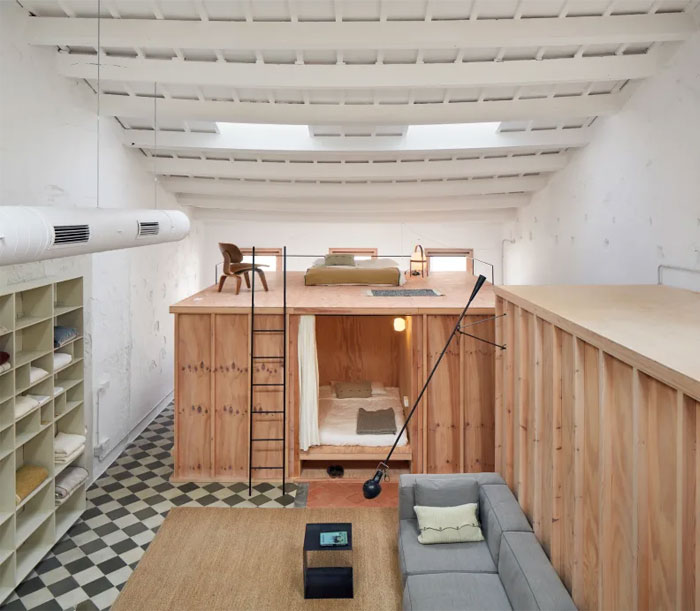 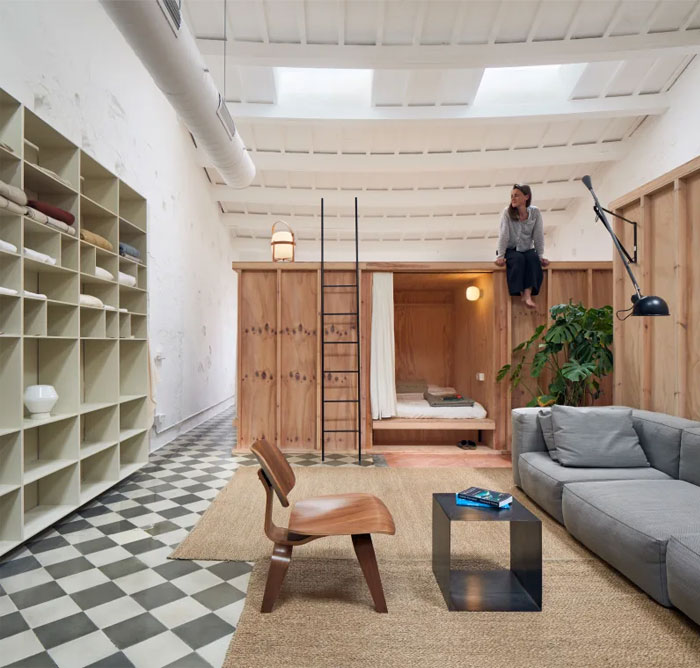 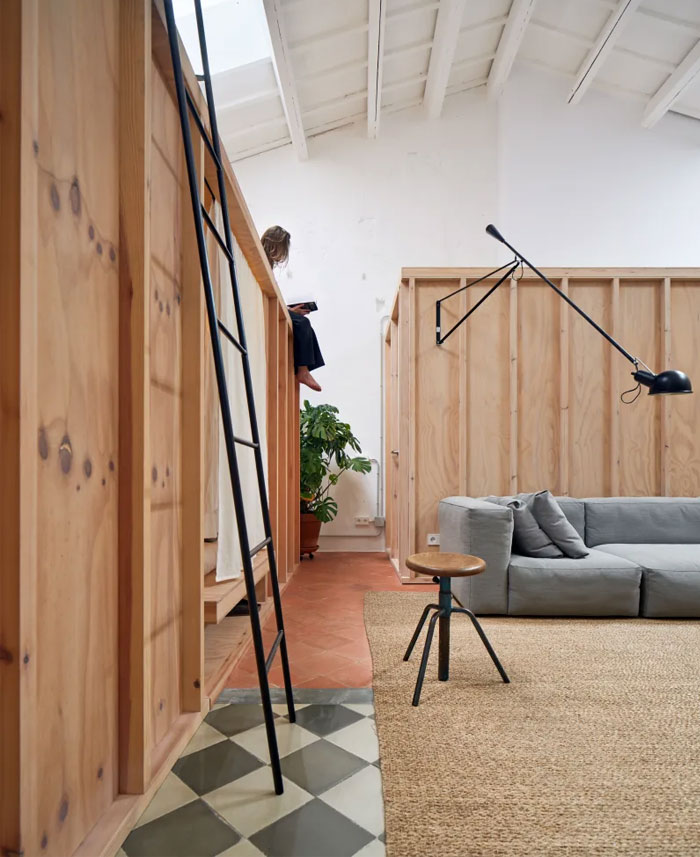