Osteria ‘Betulla’ is the second project of a talented chéf Arslan Berdiev, the founder of the sensational restaurant Birch. The concept of osteria Betulla relies on simple Italian food in the original version with an emphasis on high quality of products. An important feature of all Arslan’s projects is perfectionism and unexpected serving of dishes, in a manner surprising for the guests, which is reflected in the osteria’s cuisine. 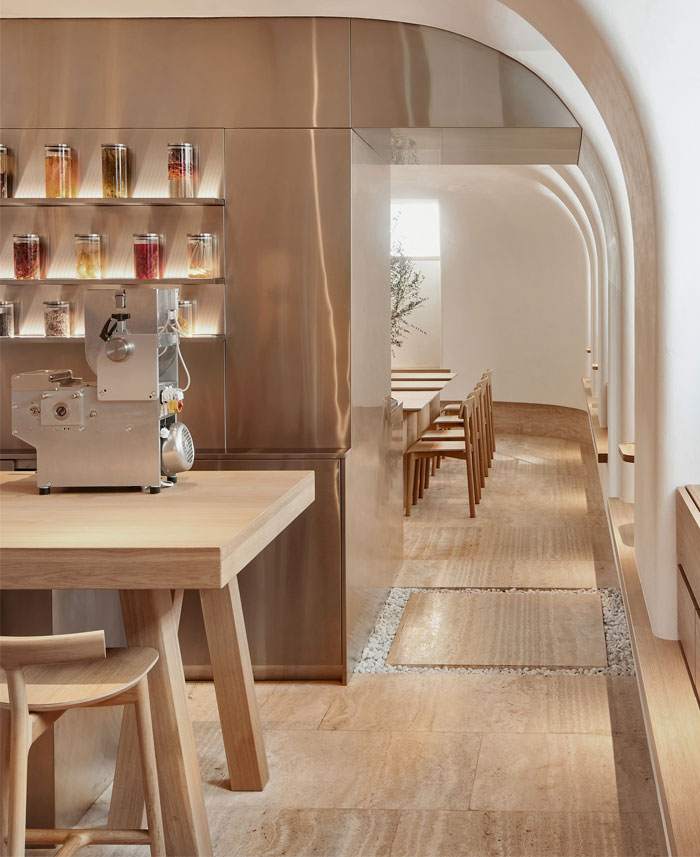 From the very beginning, we were orientated at the image of an “Italian dining hall”, but in a very minimalistic and pure manner. We knew how sacred the restaurant team felt about their work, so we wanted to translate that feeling into a visual image. This is how we came to the idea of a certain “food temple” – a place resembling an uncluttered, minimalistic European chapel flooded with light. 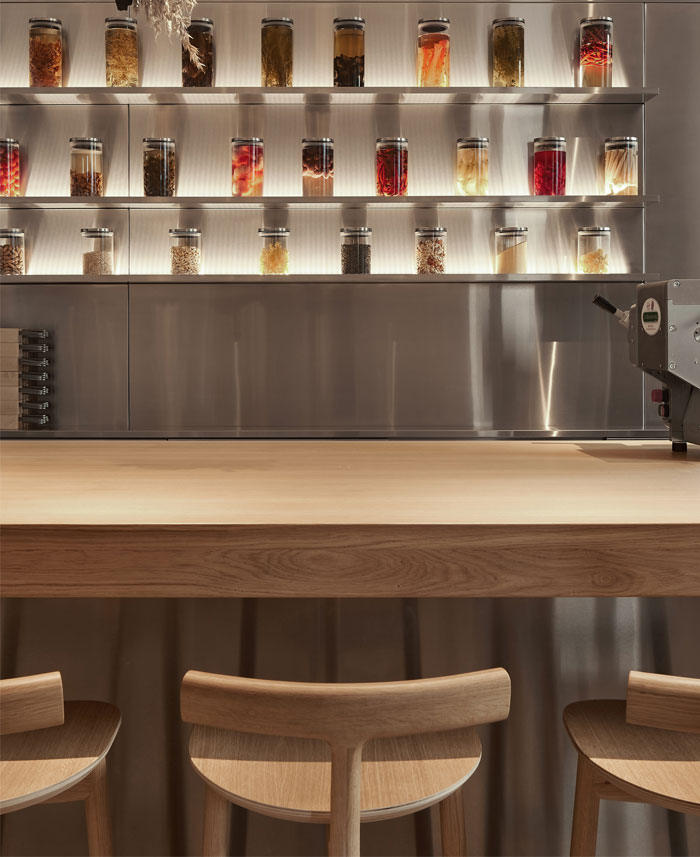 At the same time, we wanted not just to recreate a classical Italian interior, but to bring the modern spirit of Italy to St. Petersburg, using traditional colours, shapes and materials. In working over this project, we used the architectural dramaturgy characteristic of traditional churches. The guests get into the space through a tapering ensconced, shaded entrance. They enter into the first, dimly-lit small hall, and further – into the second hall flooded with light. This way the guests proceed smoothly from shadow to light. 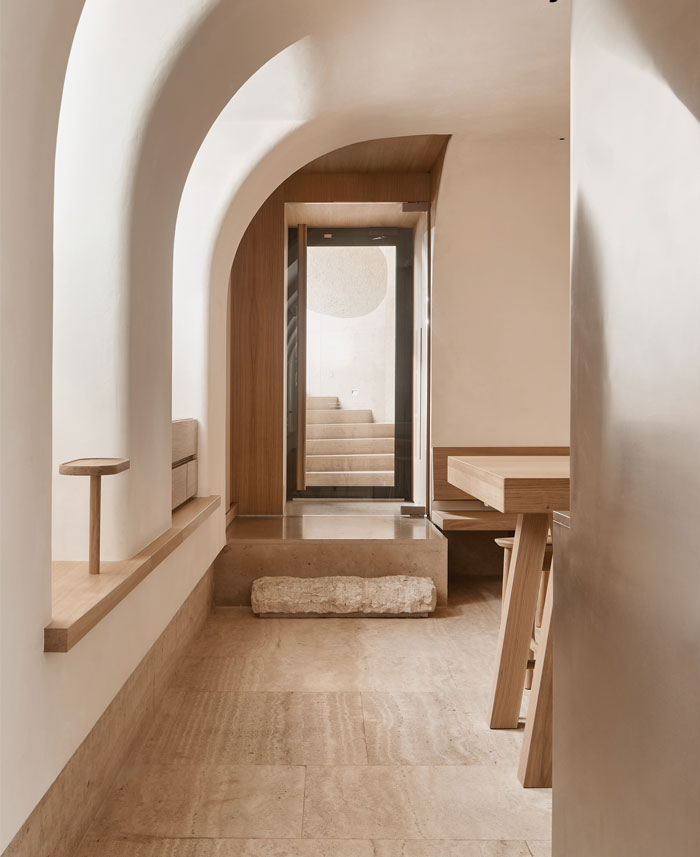 We widened all window openings in the hall (which is located in the basement, below the ground level) and lowered them to the seating level, for the hall to be better exposed to light and not be perceived as an underground vault. We placed the elements referring to Catholic aesthetics practically everywhere. The centrepiece of the first hall is the metaphorical altar – a large table where the pasta chéf works. All the tables are turned towards him, which creates the effect of theatrical performance and allows the guests to watch the pasta making mystery. 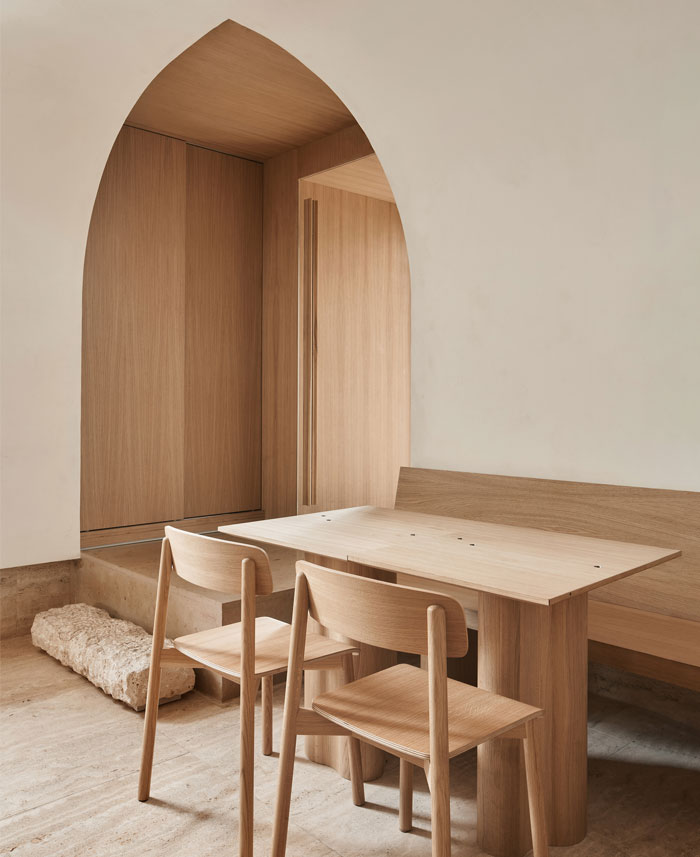 The zest of the second hall is the church pews in the centre. At the same time, the accents are made on the olive tree and the three kiots (a kiot is a niche traditionally housing icons of saints). Since the Italian cuisine has its own holy trinity – wine, olive oil and thyme – we placed them in the niches. The drinking fountains, common in Italian cities, took the form of a wine cooler in the first hall and a sink in the rest room area. Since Italy is famous for its wines, we couldn’t do without the wine cellar which is effectually positioned in the under-staircase space. Owing to the light colour play and the mirrors on the walls, we were able to visually flatten the geometry of the cellar. 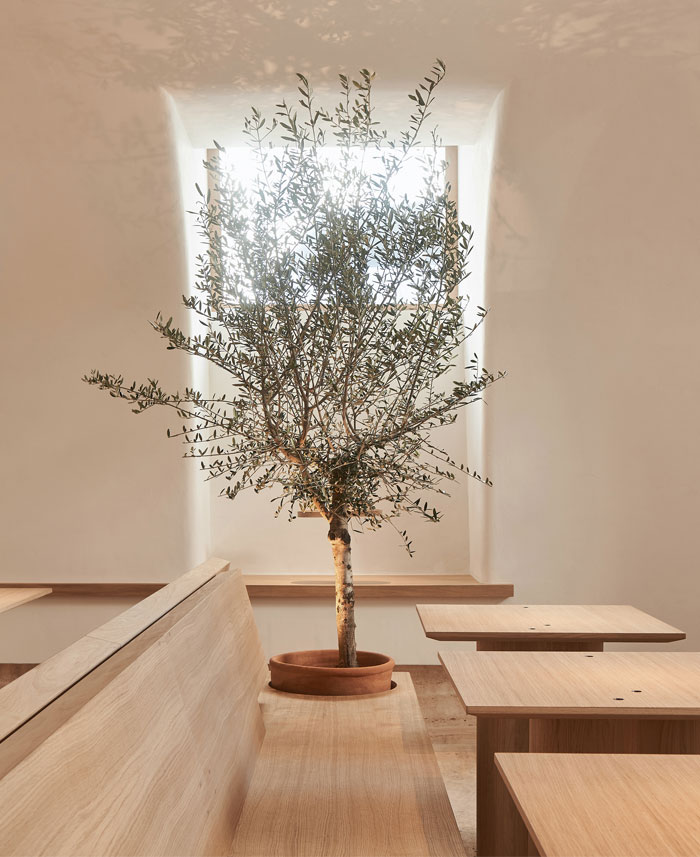 We wanted to create a very pure and minimalist look, using expressive media to the slightest extent. This is why we used only three basic materials: travertine, which is often found in paving of Italian streets, wood for the furniture and wall panels, and light-colour plaster as the main material for the walls. All this helped us to convey the image of Italy. The development of the entrance area was a separate project. We were able to come up with an interesting shape and texture. It is a kind of manhole made of a single piece of rock, which refers one back to the first hermit-monks’ grottoes and rupestrian churches. A notable element, much loved by all the guests, is a curved mirror deeply recessed in the supporting wall. This is our silent hostess that welcomes and sees you off. 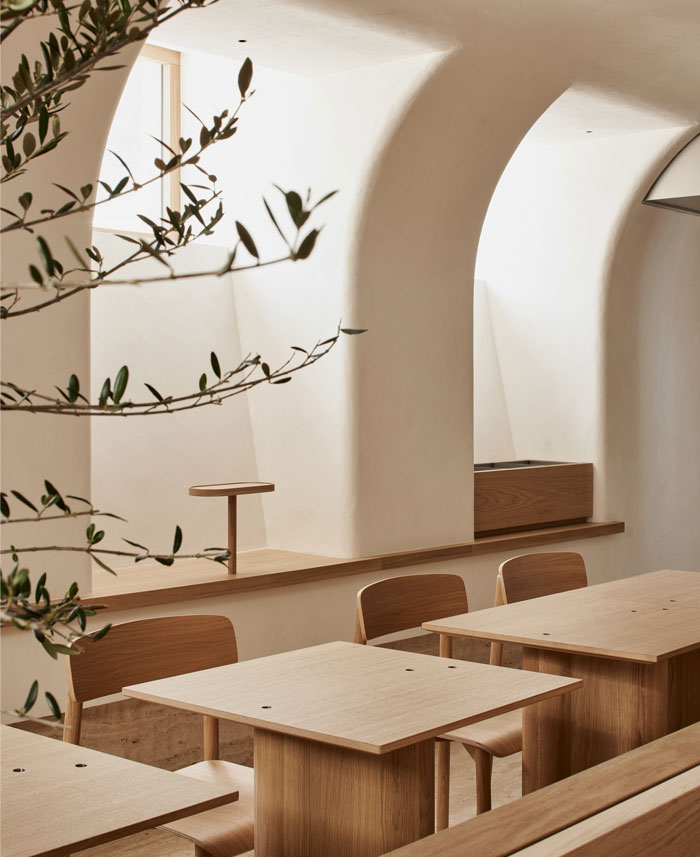 Owing to the meticulous approach to design, great attention to detail and well-thought-out sections of the space, we were able to realise the original idea and create a minimalist Italian “food temple” where you can always witness the mystery of pasta making and take its warmth back home. 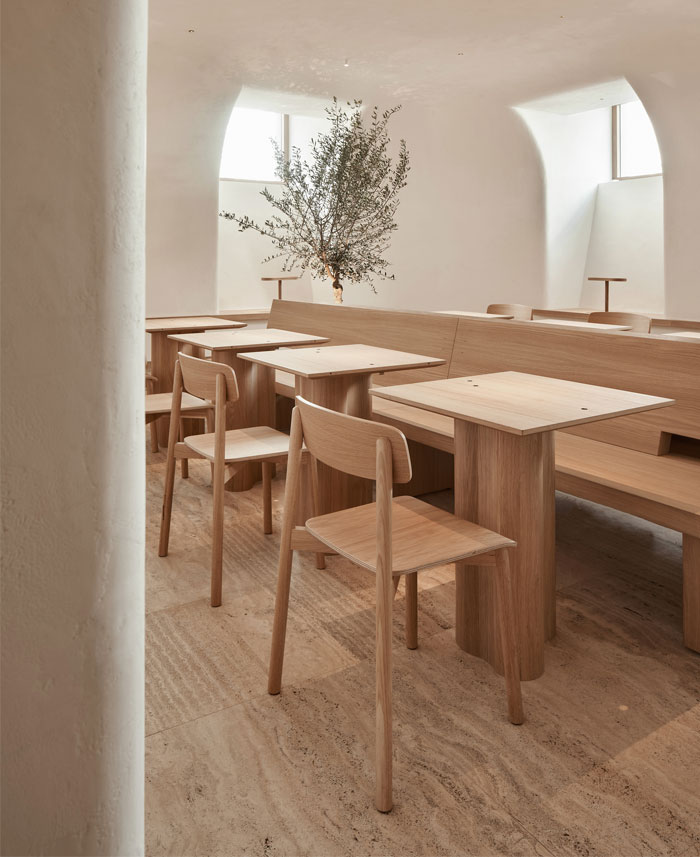 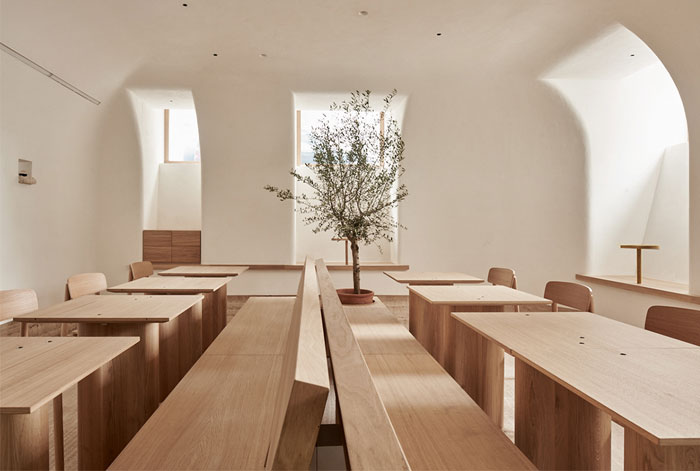 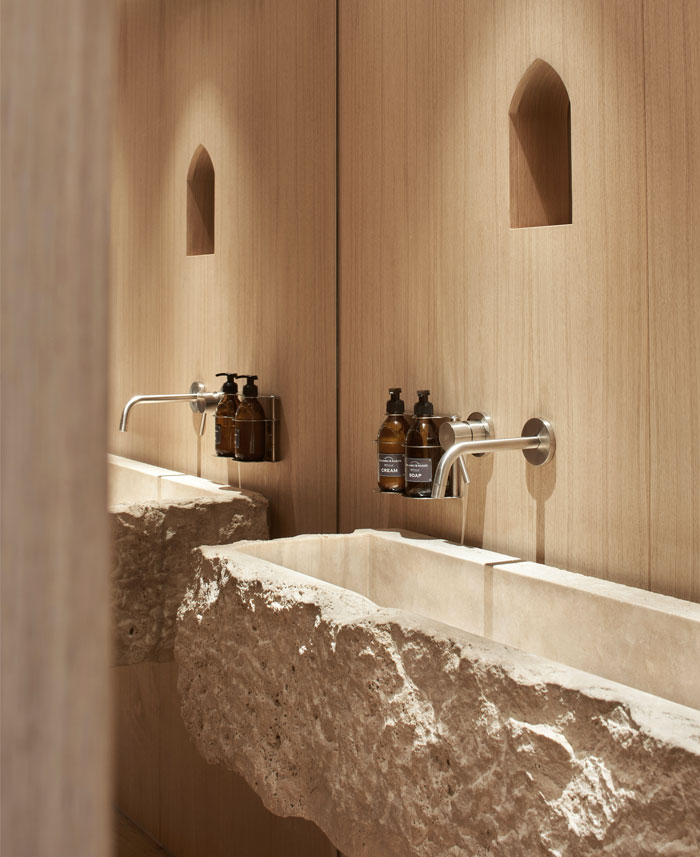 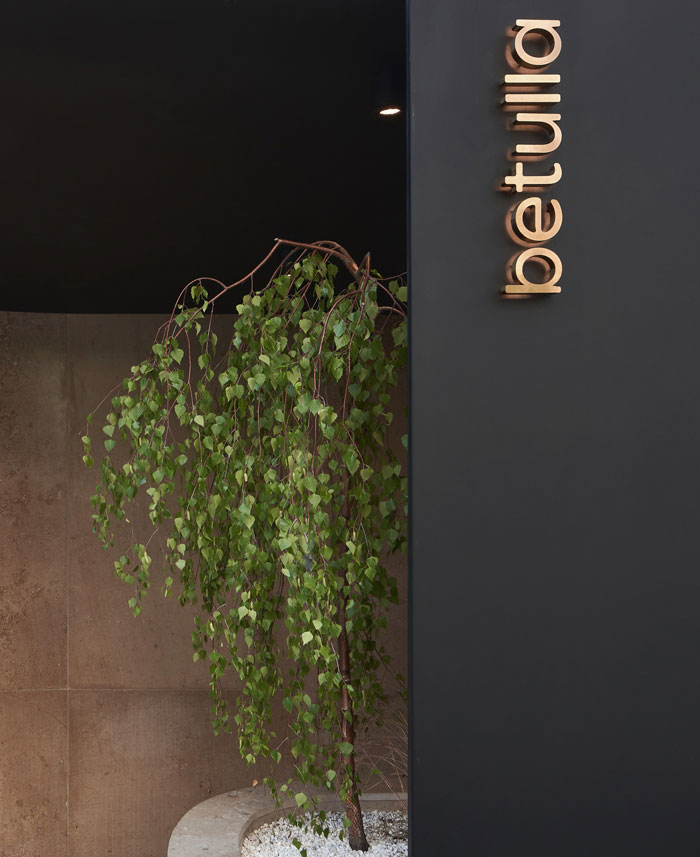