Located in the vibrant, historic North End of Halifax, Nova Scotia on a narrow and abandoned lot. In the decades prior, the adjacent property was the site of a neighborhood African Nova Scotian barbershop. The project was designed with the intention of becoming the primary residence of Omar Gandhi, his partner, and his son, sitting over the top of what would become the architecture studios’ east coast home base. However, over the course of the build, the studio grew to a level that could no longer be accommodated in the modest space. The ground-floor office is now a dedicated community studio, focused on community projects specifically located in the north end of Halifax, including housing for the homeless and safe public amenities. 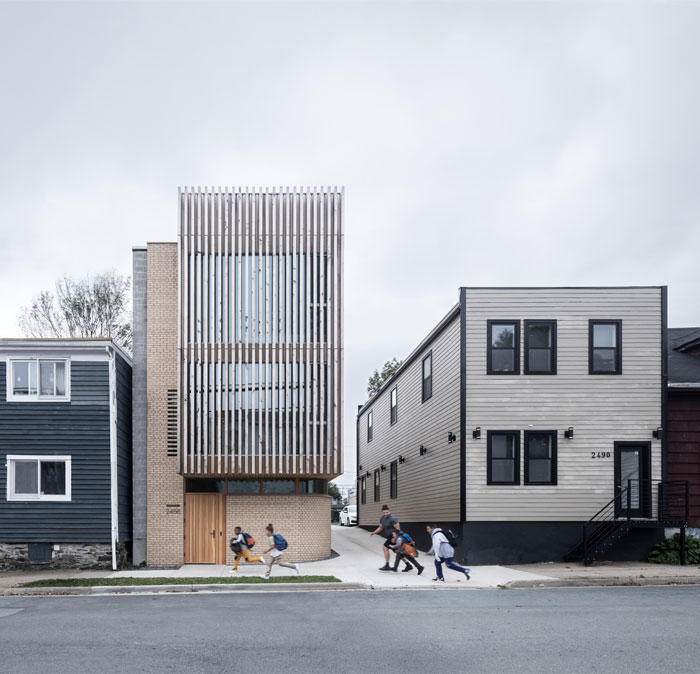 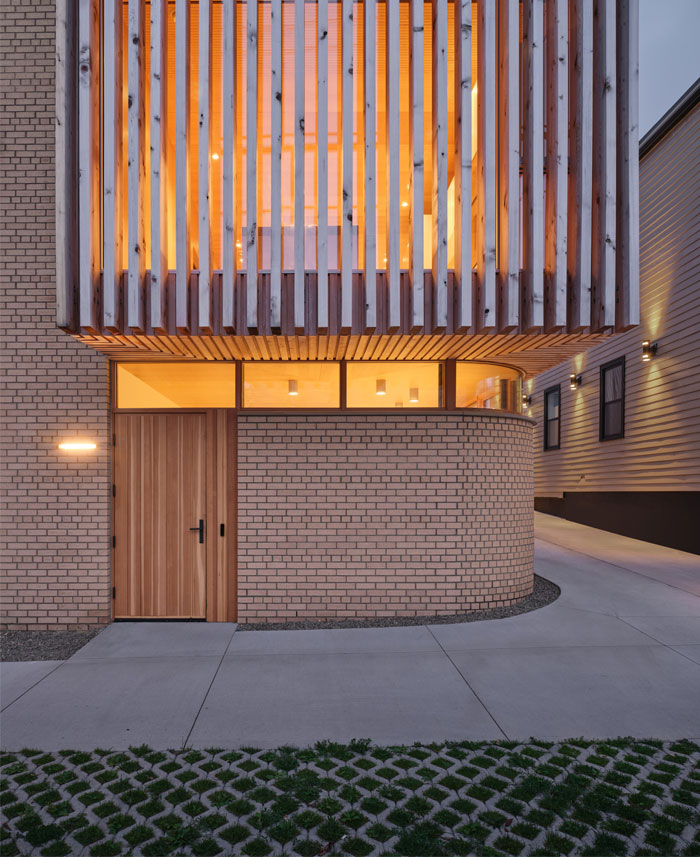 The primary entry for both the studio and house is situated at the rear of the property through a brick courtyard and down a full-width brick stairwell. A large, raw, steel-clad, pill-shaped closet both marks the entry and provides privacy for the studio space. At the top of the first run of stairs is a brick and wood-lined powder room made secure with a 9-foot tall, raw steel pivot door. A custom sink carved from a white oak block hangs from the wall. 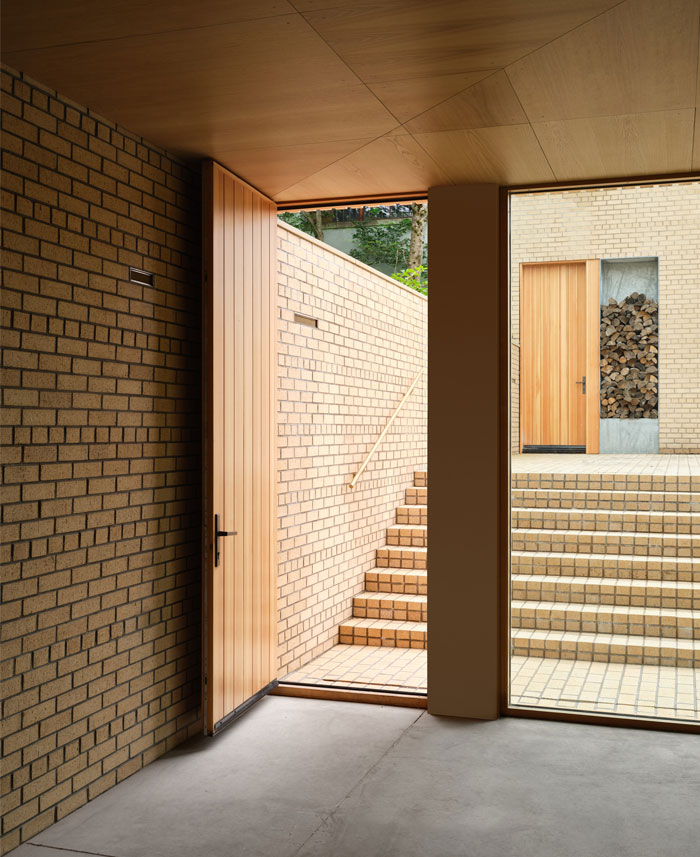 The second floor, clad entirely in white oak paneling, houses the kitchen, dining, and living room spaces. Carved into the end of the volume is a two-story lightwell that reached the full height of the house. Intensive lighting studies and parametric modeling were used to form find the lightwell shape to ensure optimal natural lighting conditions throughout the length of the living space. A long, white bar of millwork connects the length of the floor – housing all storage, kitchen amenities, wood storage, and the wood-burning fireplace. 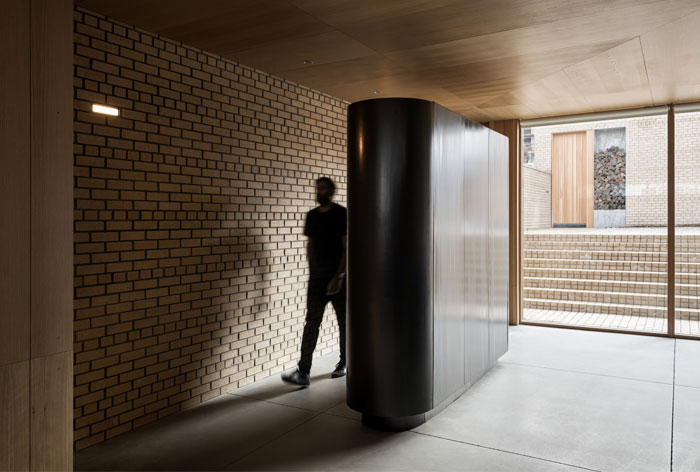 A white oak kitchen island and dining table make up over 30 feet of length spanning both the kitchen and dining spaces with a double curved opening allowing for easy flow through the space. The third floor is composed of two bedrooms, including that of Omar’s son which looks down into the living room lightwell through an opening above a desk. Two contrasting, monochrome bathrooms live on the same floor, both feature full-length skylights which reveal the extreme weather conditions and dramatic skies of the coastal city. 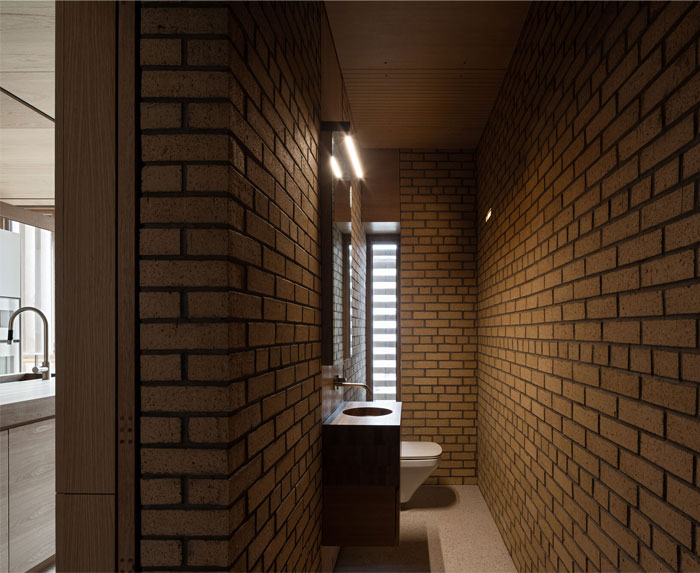 Up one final flight of stairs lives the roof space which includes a small sitting area and garden at the street side of the house. Wood-lined stairwells and handrails with organic, custom-designed bronze brackets emerge from the seams of the white oak paneling. The formal massing is composed of a two-storey, eastern white cedar-clad volume atop a buff-coloured, brick cradle. The house is predominantly inward-looking with few visible windows looking out at the street or rear of the property. 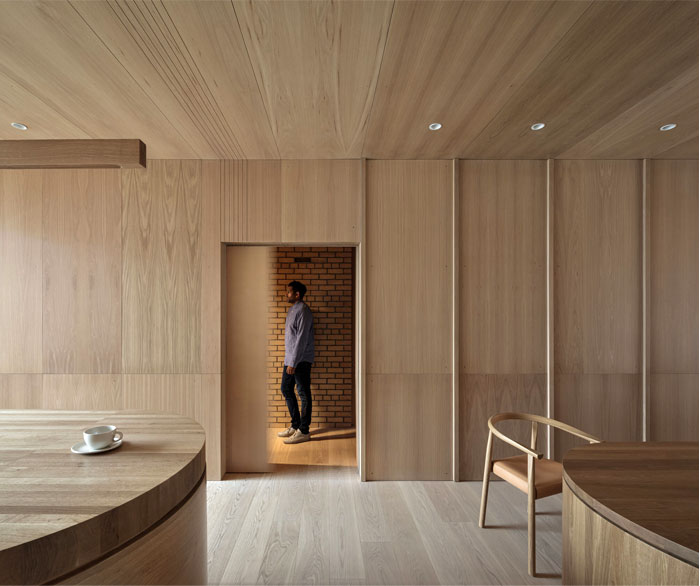 The upper wood volume, composed of the living amenities, has full-height glazing in both the kitchen on the second floor and the master bedroom on the third floor hidden behind a western red cedar veil. The veil (or screen) provides privacy for both Gandhi and his family and those on the sidewalk below. In the evening, the screen monitor comes to life with a soft glow of warm light. The rear of the wood-clad volume includes a long wall-to-wall slot window at sitting height which allows for a pleasant view of the brick courtyard and the (future) wall of climbing Boston ivy. 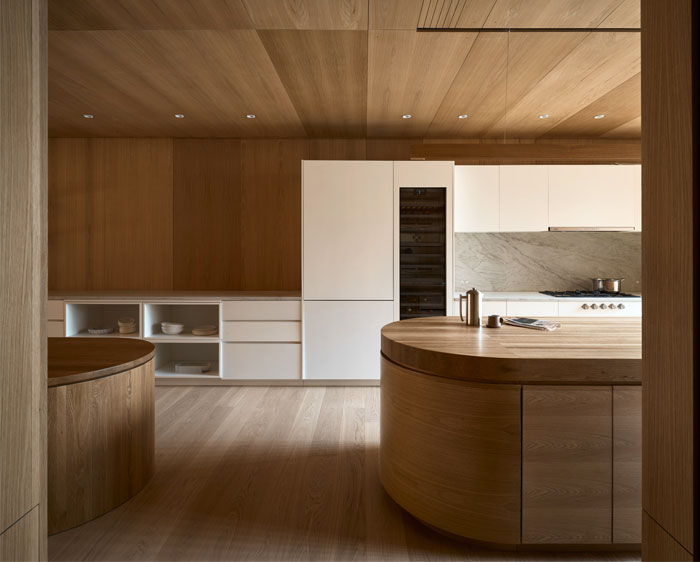 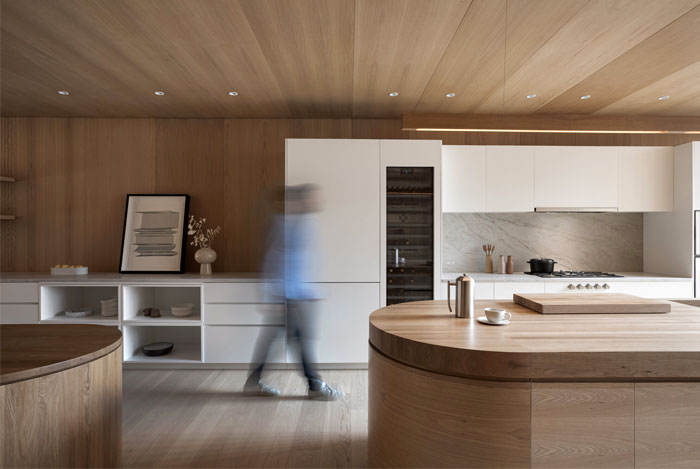 The brick podium is composed of one of two natural clay brick tones used in the region – buff – which is predominantly used for ordinary building stock including multi-unit housing in the north end. The common bond was used to acknowledge the traditional patterns and textures used on brick architecture in the city from a century prior. A gentle, rounded corner at the intersection of the driveway and sidewalk pulls visitors and the homeowners to the rear of the house. 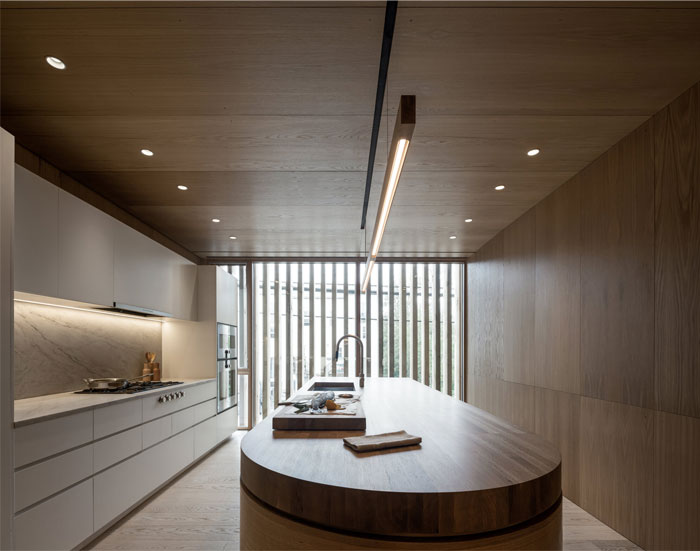 The gentle curve is repeated in various forms throughout the interior and exterior of the house. In plan, the building is composed of the main house/studio and a shed at the rear – connected by a thick brick and sandstone stone-capped wall. Custom bronze brick lights dot key sections of the façade for evening lighting while disappearing into the brick’s texture during the day. Upon reaching the end of construction, the cedar-clad façade had already lost much of its vibrancy and faded gently to resemble much of the weathered wood textures of the neighborhood, all while maintaining much of its curious spirit. 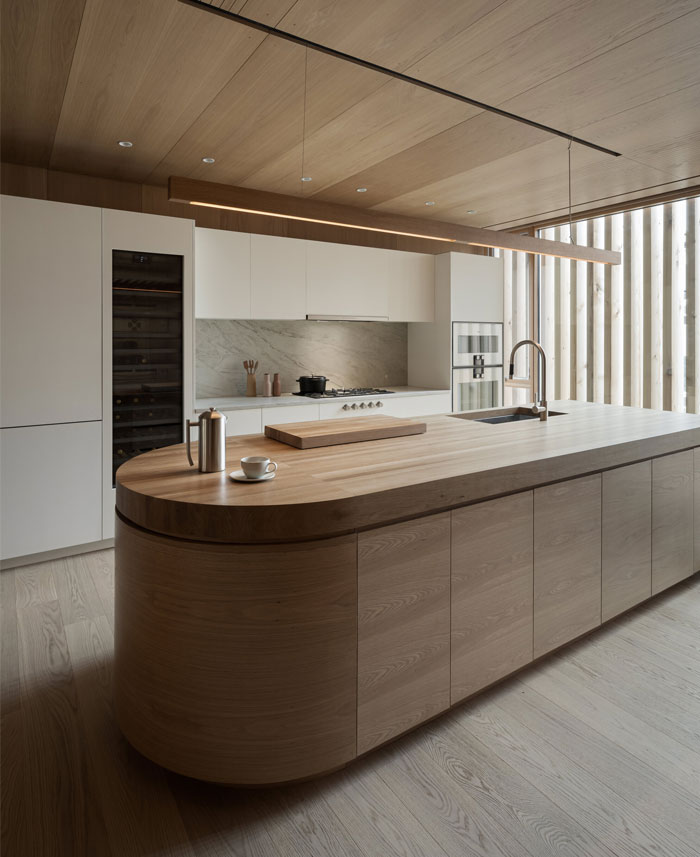 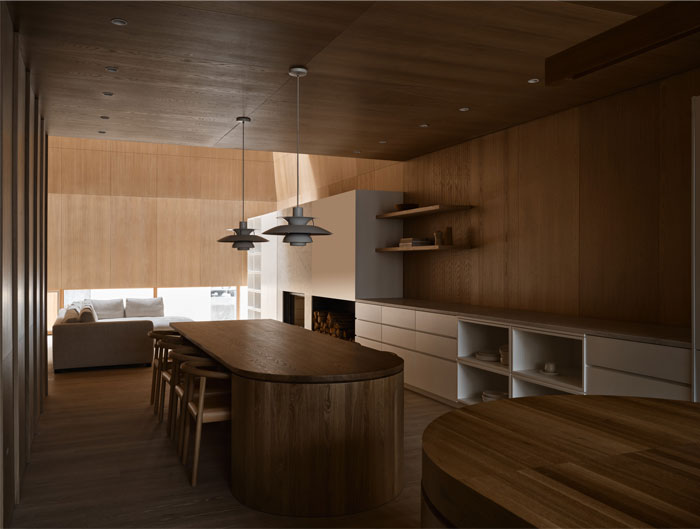 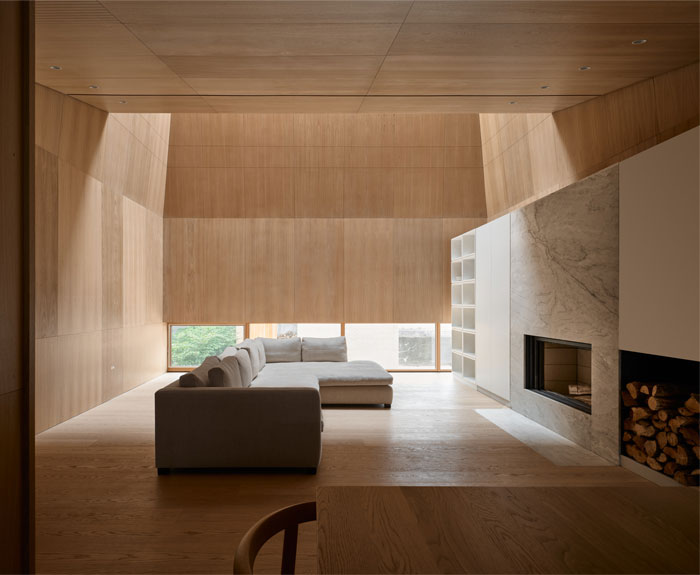 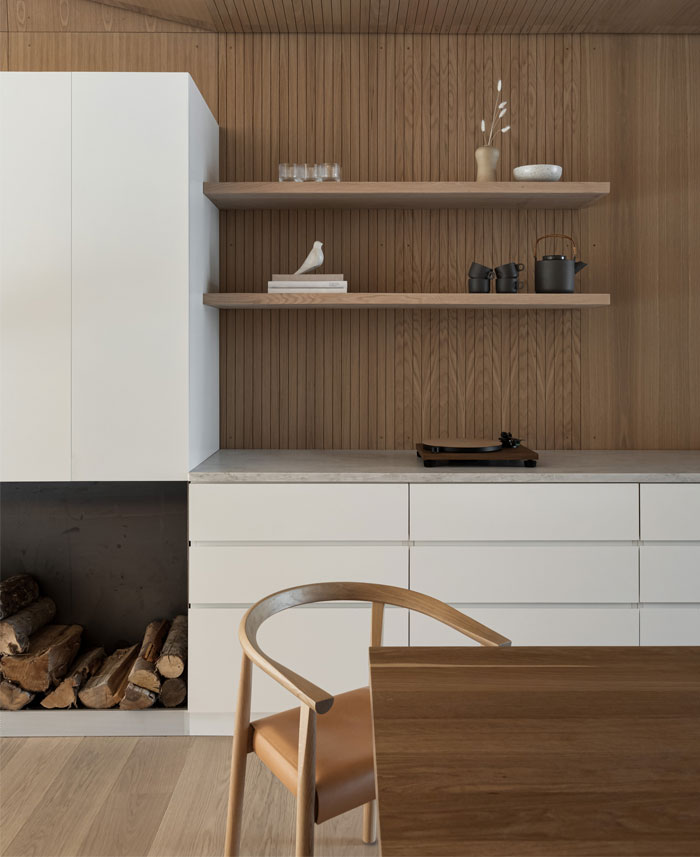 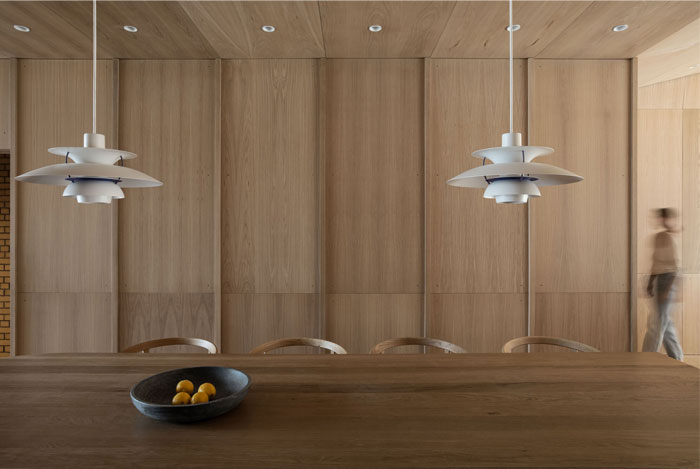 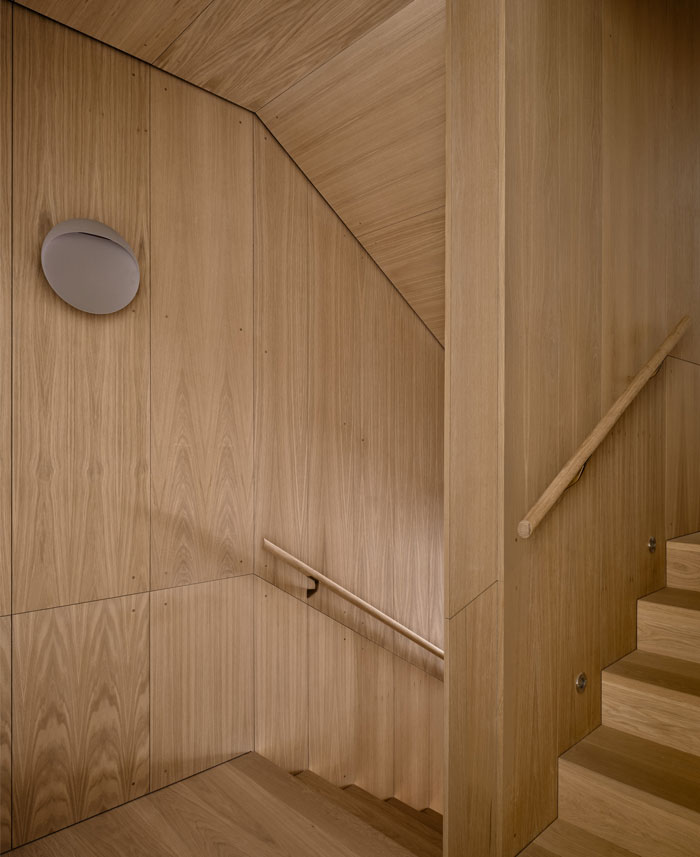 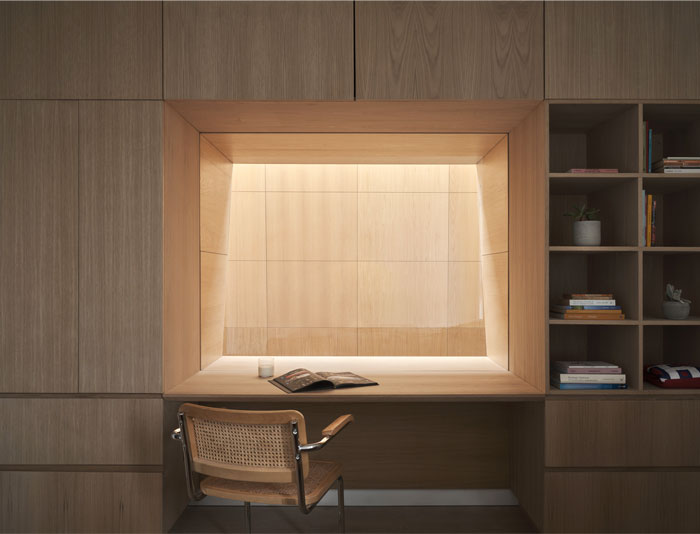 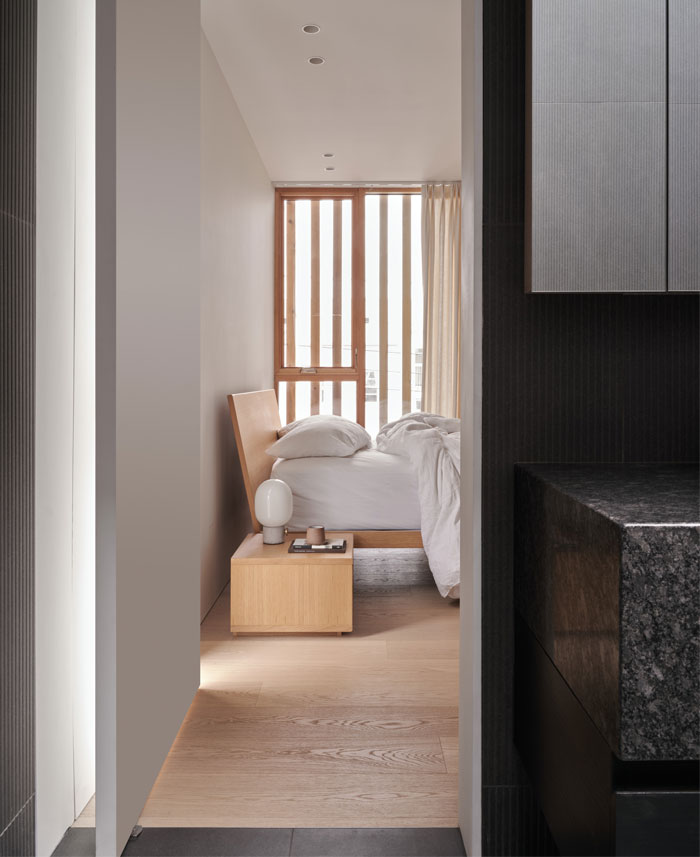 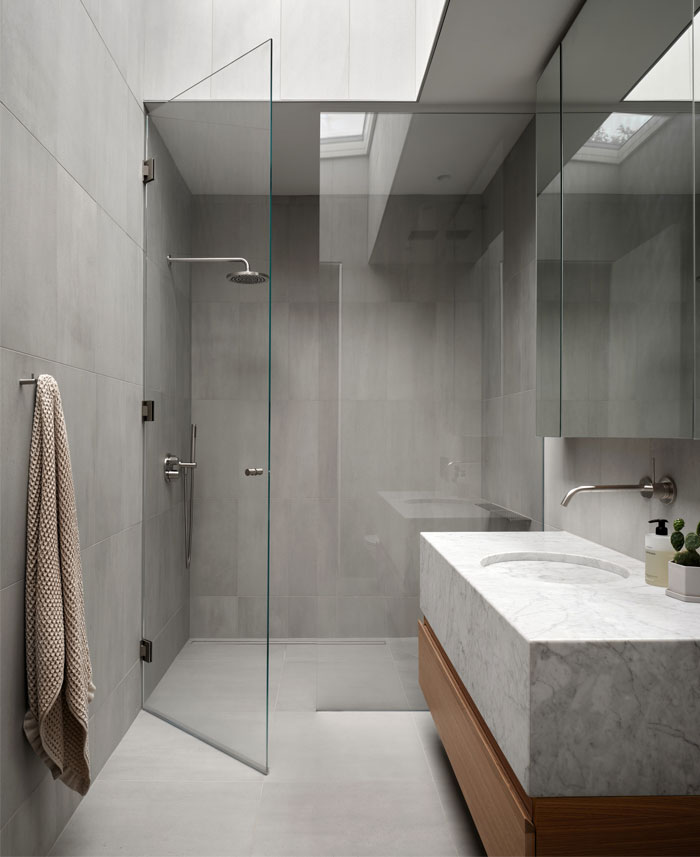