An absolutely new approach to the family shopping culture! Now at the supermarket you can not only stock up on everything you need, but also have an interesting time. Everything that surrounds you in Vinnytsia SILPO is an excellent occasion for discussing the beautiful, eternal and cosmic! In this shopping area, almost 2 kilometers long, the famous Ukrainian designers Aleksandr and Vladimir Yudin have improvised a real space odyssey in the loft and pop art styles! 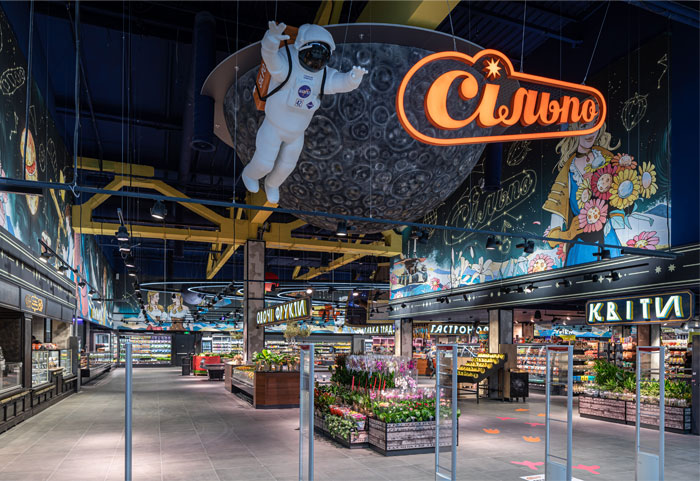 The first impression coming from the design of this space is of being at Hollywoodian pavilions, where the most iconic films about space were filmed. Everyone will be able to experience in this place some special moment, an intuitive experience or a fantastic performance associated with space. To realize this idea, the Brothers Yudin carried out a huge research work: they collected the most popular and classical ideas about space and its comprehension, presenting them in the perspective of different times: from the antique archetypes to the first significant discoveries of Galileo and Copernicus and further through our technological era. 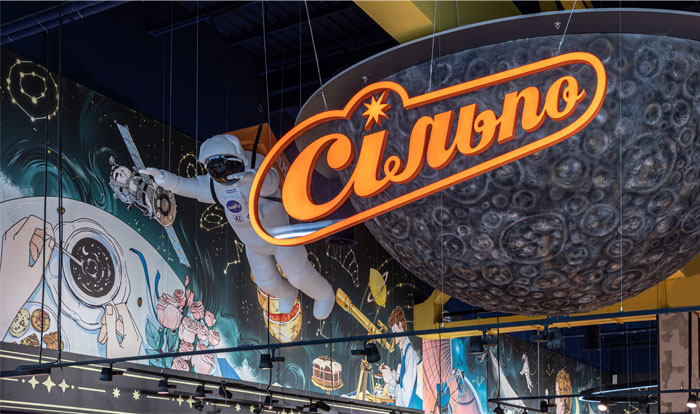 At the same time, they left in their “interior story” a place for conjectures and fantasies. Here you will find not only telescopes, satellites or space stations, but also revived constellations, fruits flying in their orbits and girls with bouquets of planets. Basically, all this is realized on an industrial canvas of space. The dark blue vault, dotted with open ventilation systems, resembles an open space. Thrown over it are massive yellow metal structures, reminiscent of the passages and compartments of the spaceships that Ellen Ripley used for hunting aliens. 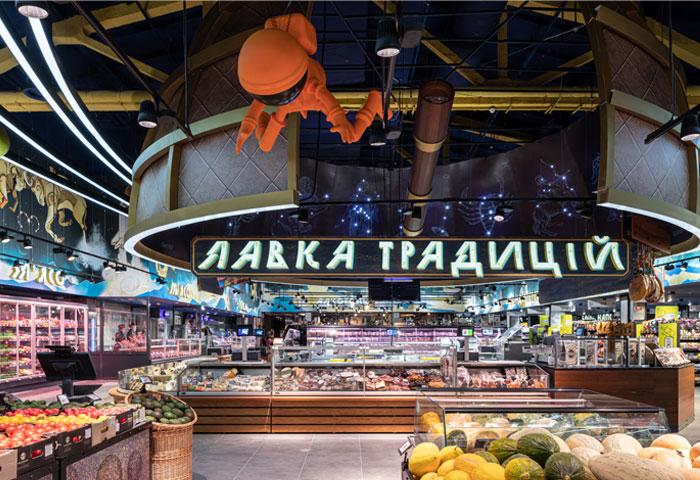 Thus, the heavy system, which is absolutely necessary for the design project as support of the decorative orbit placed one level below and the decorations in the form of planets, has itself become an interesting and cult decoration! By the way, one of the spheres also has a completely functional purpose: it is the dome of the department of cheeses and raw smoked products at SILPO supermarket. Inside it, the designers installed a sheet of metal with spotlights, which together form different constellations. 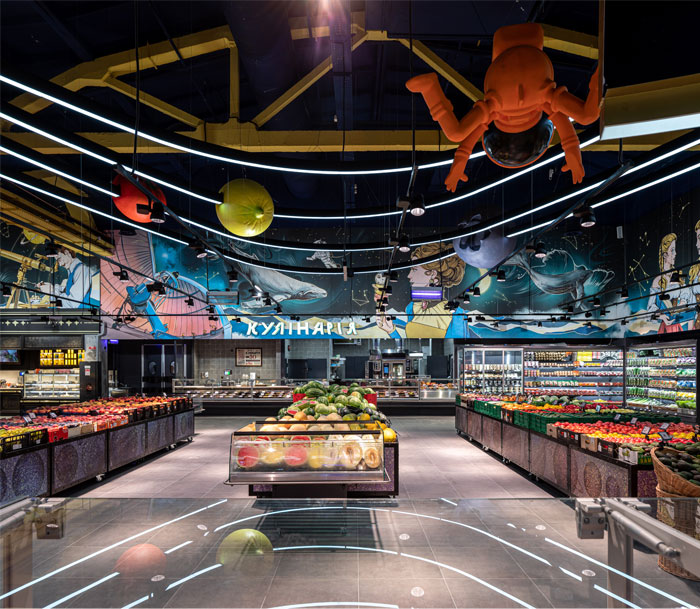 A telescope is facing the supermarket from the sphere, used as an observatory that studies the goods presented in the mall. Around the observatory there is a massive orbit along which the planetoids, fruits and olives move. These impressive large-scale decorations, presented in the technical lighting professionally selected by the Brothers Yudin, theatrically illuminate all decorative objects and counters in the shopping area, looking also like bright stars. 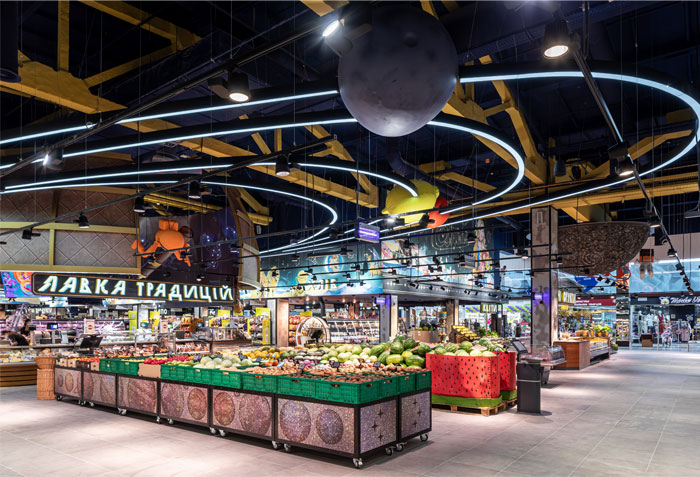 Moving further down from the vault, we see smaller decorations: astronauts and martians. This whole epic composition, which unfolds over the heads of the buyers, continues in dark blue friezes, decorated with drawings in the style of Warhol’s pop art. Here we see a completely insane picture of space, somewhat reminiscent of the artistic images of the American 70’s: flowers, planets and grapefruit cut into segments are presented in the form of a planetoid; constellations disturbed by high ocean waves; the flock of whales that caused these waves; the wonder women with bouquets of planets drawn under the impression from listening to Pink Floyd albums. 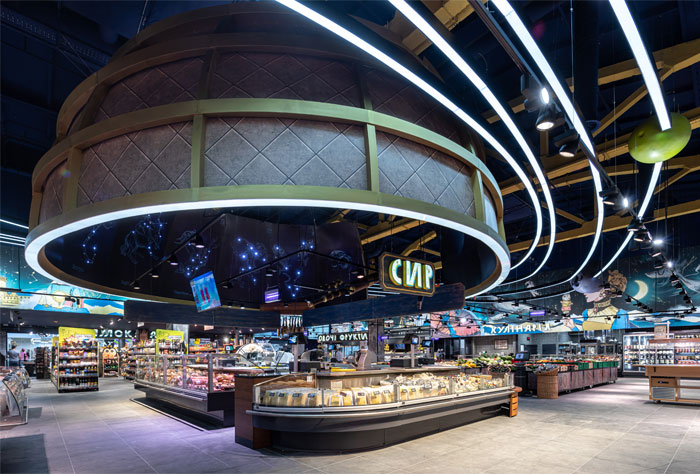 Colorful friezes rest on the classic-style pillared counters. One of the most attractive departments is the bakery with its own cafe. On the ceiling there are stained-glass windows with drawings on the theme of the sun. The counter is decorated with unusual tiles with ornaments in the Mesopotamian style. The tiles themselves look more like sand stones used to build palaces and pyramids of the ancient world. The designers designed the bakery-cafe as a tribute to Copernicus, realizing it in the classic style with a reference to the Renaissance. 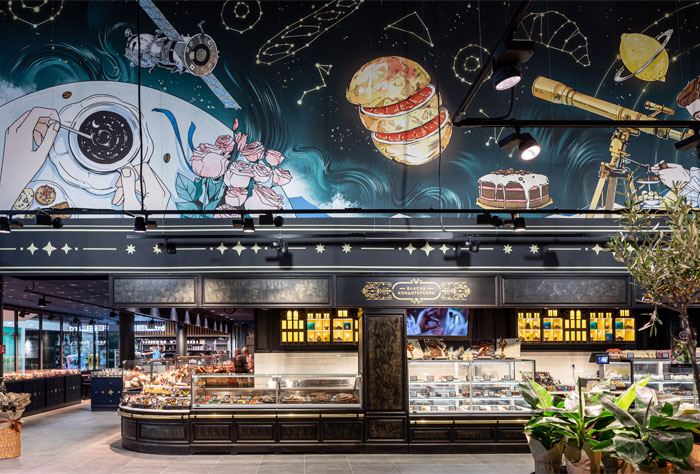 The stalls in the fruit and vegetable area of the supermarket are also decorated with more classic planetary representations – a subtle touch that integrates the traditional bakery motifs with the rest of the store, as well as the massive columns imitating textured stone or steel. Thanks to the work of the founders of the studio YUDIN Design, the SILPO supermarket in Vinnytsia is not only an eclecticism of styles, but also refined ideas about space and the eternal striving of man for the stars… 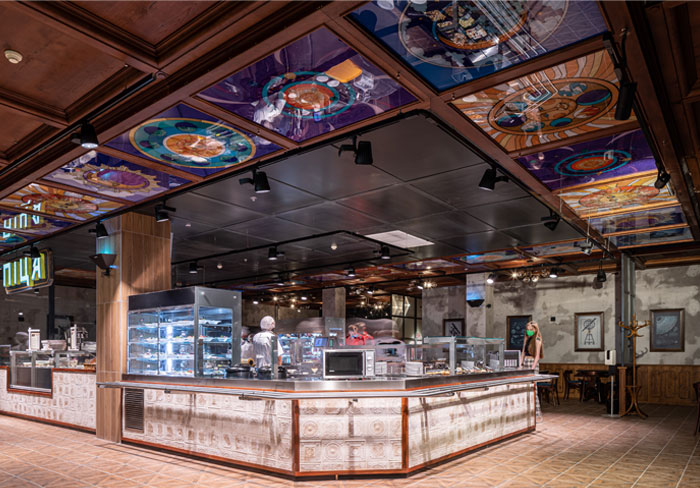 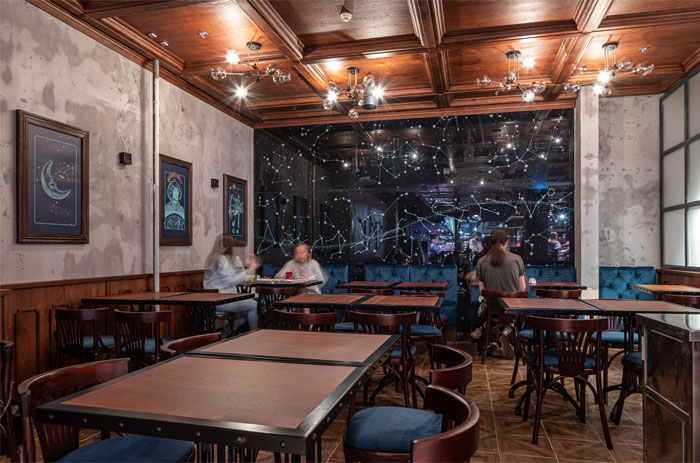