White Rabbit Surf Café is a venue on the Southern Bug river bank in Khmelnytskyi city, Ukraine. A cozy café, a shop, and a rental of SUP boards are united into one building here. The place belongs to the couple – a designer Natalia Solovey and her husband, an entrepreneur Oleg Solovey. 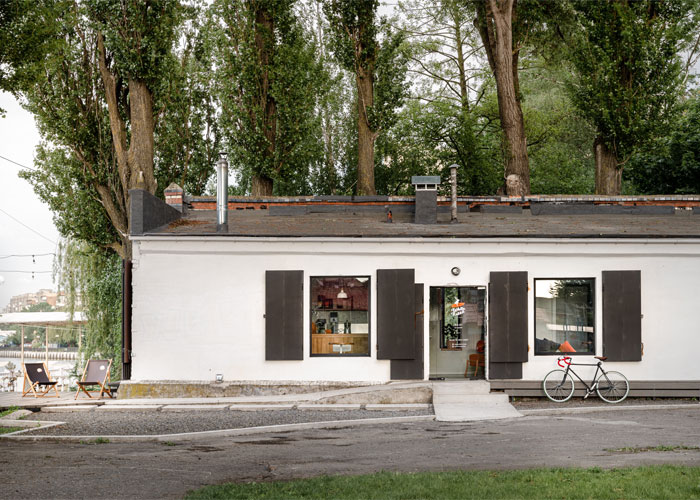 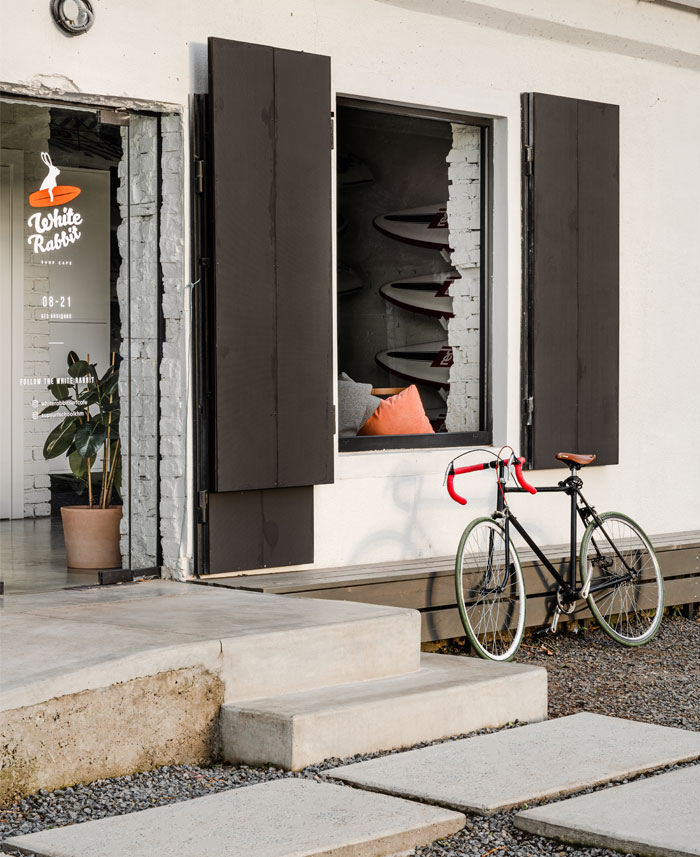 The history of White Rabbit Surf Café takes its origin from two dreams. Natalia Solovey as a founder of SOLOVEYDESIGN studio, who was predominantly developing herself in residential interiors had a big dream to run a café with a unique atmosphere and minimalistic design. Oleg Solovey was a fund of SUP surfing and wanted to develop that new sport in his hometown. Eventually, they combined both dreams and set up a unique place that influenced the leisure of many people in Khmelnytskyi. 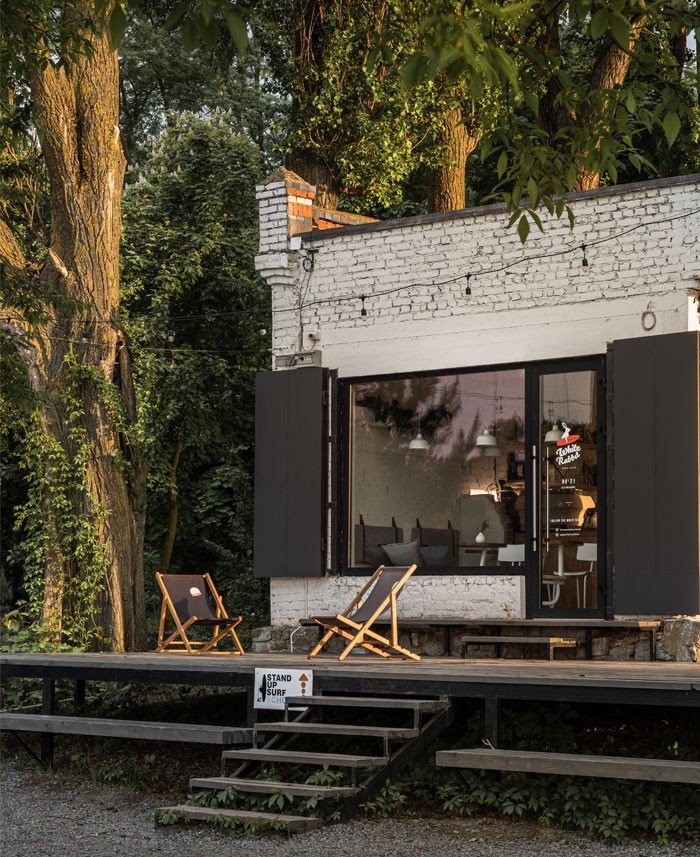 The venue is located in a one-story building that was erected in 1964 next to the sports stadium on the bank of the Southern Bug. A long time ago, there used to be showers and changing rooms for volleyball players who had been training nearby. 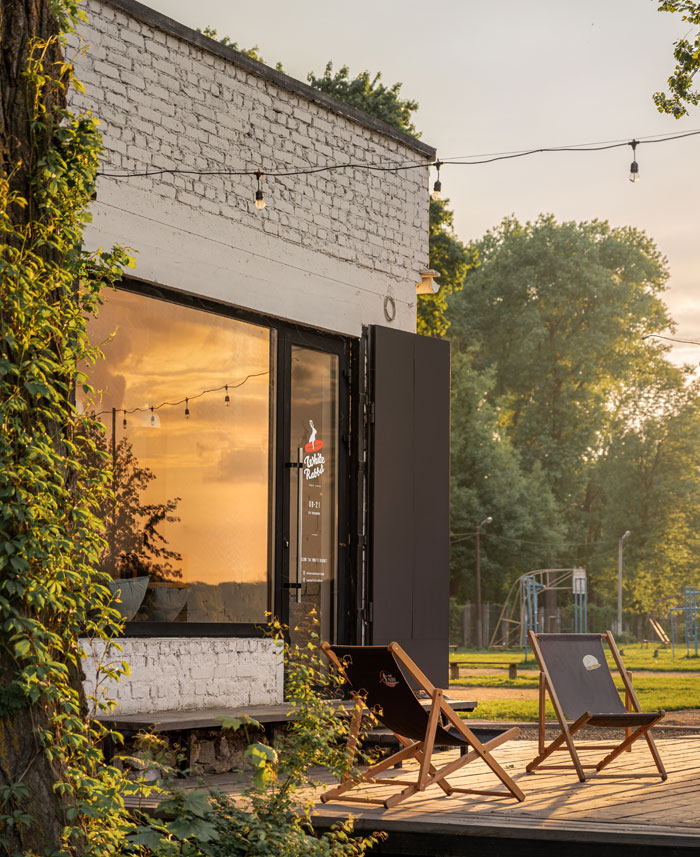 – When I came into the building, which had been neglected during the last 20 years, it took my breath away at first. I have barely noticed the mold on the walls, sprinkled plaster, or remains of tiles from the Soviet period. What I saw instead was the beautiful brickwork and picturesque view of the river. But still, the view was blocked from sight with a blank wall, where we installed a big leaded glass window subsequently – designer Natalia Solovey says. 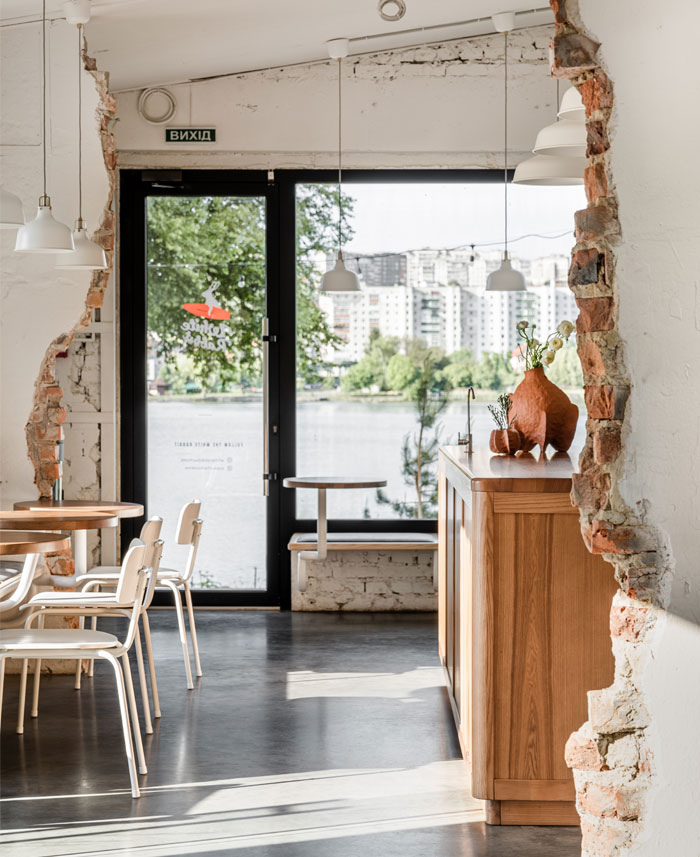 The color pallet of White Rabbit Surf Café carries white, gray, light wood, and terracotta shades of ceramic, leather, and armchair upholstery. Walls cleared of plaster and painted into white made the flawless background for the pure and minimalistic interior. 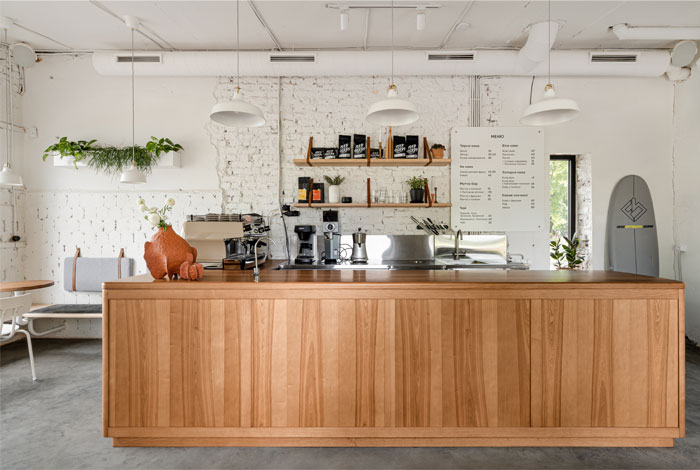 – I imagined our cafe so vividly that it was decided not to waste time on accurate blueprints and renders. One brief sketch on the sheet of paper was enough. We made blueprints only for the electrical grids and custom-made furniture. The result looked 100% like the place I had imagined – designer Natalia Solovey shares. 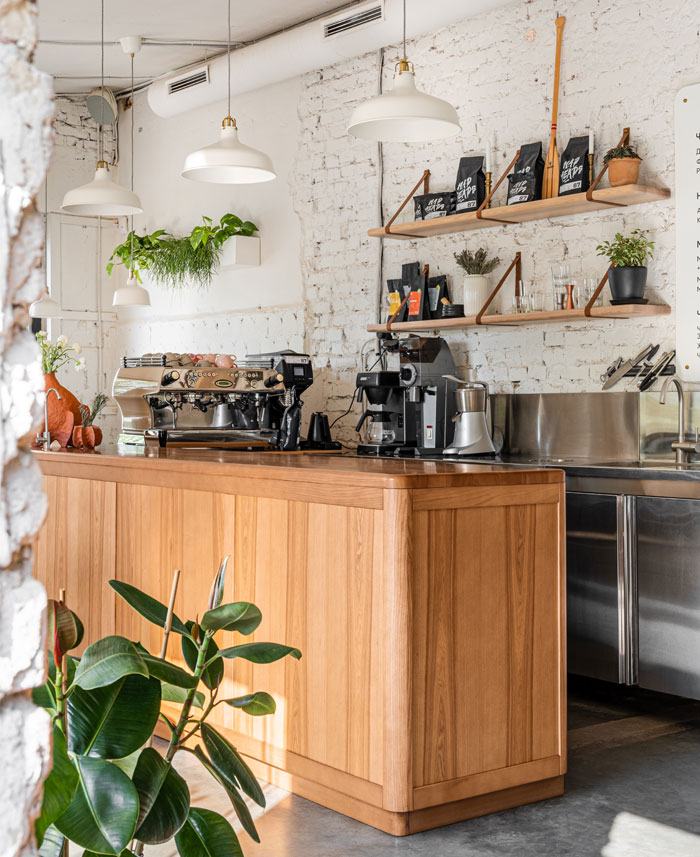 The sizable bar counter, tables, and seats are made of ash wood. Almost all the furniture is custom-made in local workshops. There are some pieces by Ukrainian brands, armchairs by ProPro Furniture designed by Slava Balbek, a white coffee table by Staritska Maysternya, ceramic vase by Natura Ceramiс. There is a fireplace that is lit in winter. 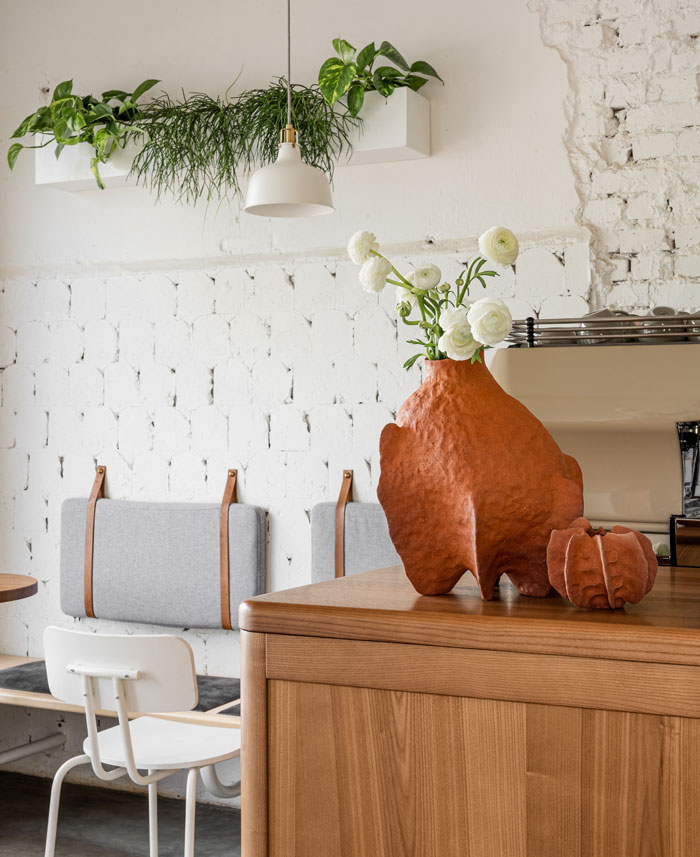 The space of White Rabbit is divided into two parts. One has a café, and the second has a shop and SUP board rental. There are no doors between them, only an asymmetrical doorway. The designer and her husband made it with their hands. Oleg wielded a hammer, and Natalia pointed to him where to hit and what part of the wall was left untouched. 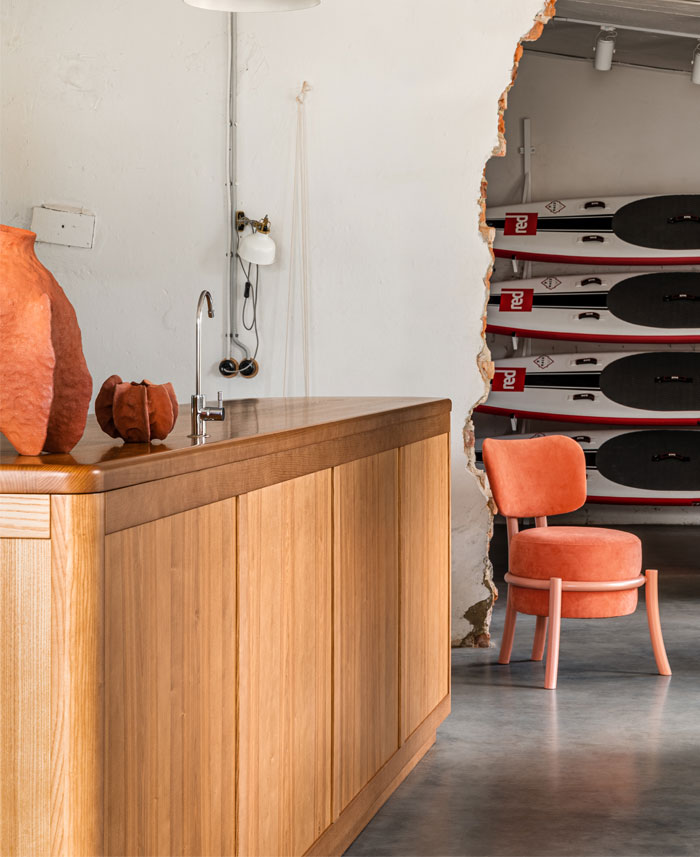 White Rabbit Surf Café has two doors. The main entrance from the stadium side and the exit to the terrace. There are more guests on the terrace and on the embankment near the venue than inside the café in the summer season. Almost half of the city gathers here when parties are taking place. – We formed a large and vivid community around White Rabbit. People who are keen on SUP, yoga on the water, sunsets, poetic evenings, chamber live music concerts, young painters ’exhibitions. There is a land where people open and share what they love the most. During the short time, we impacted the urban recreation culture and opened that part of the park and the river bank to the people who had never come there before – Natalia Solovey says. 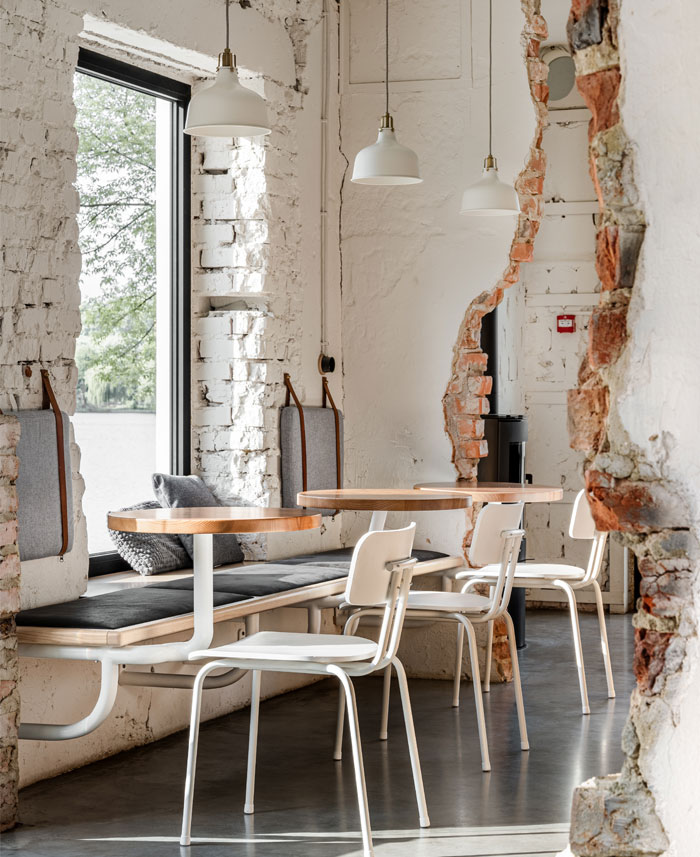 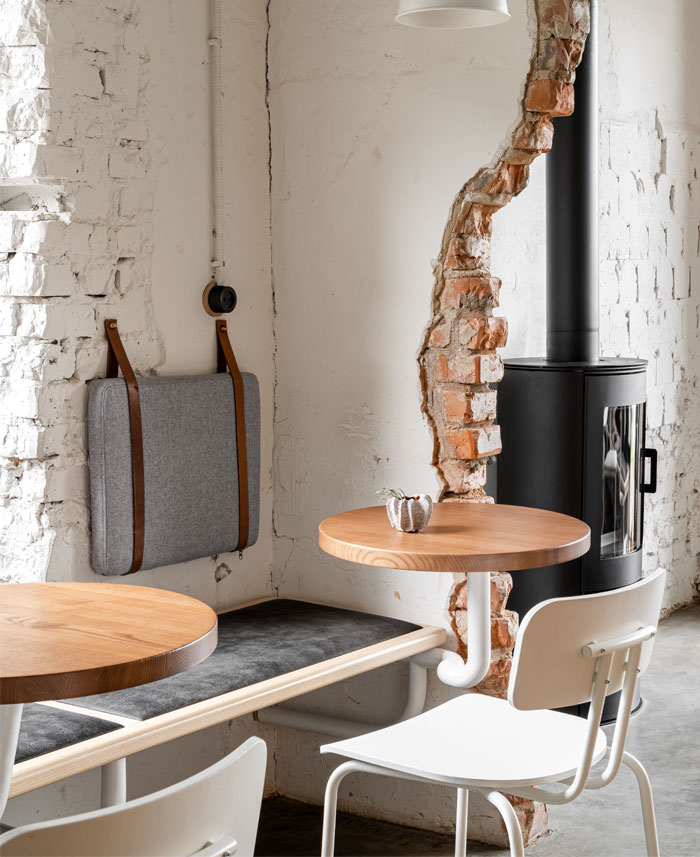 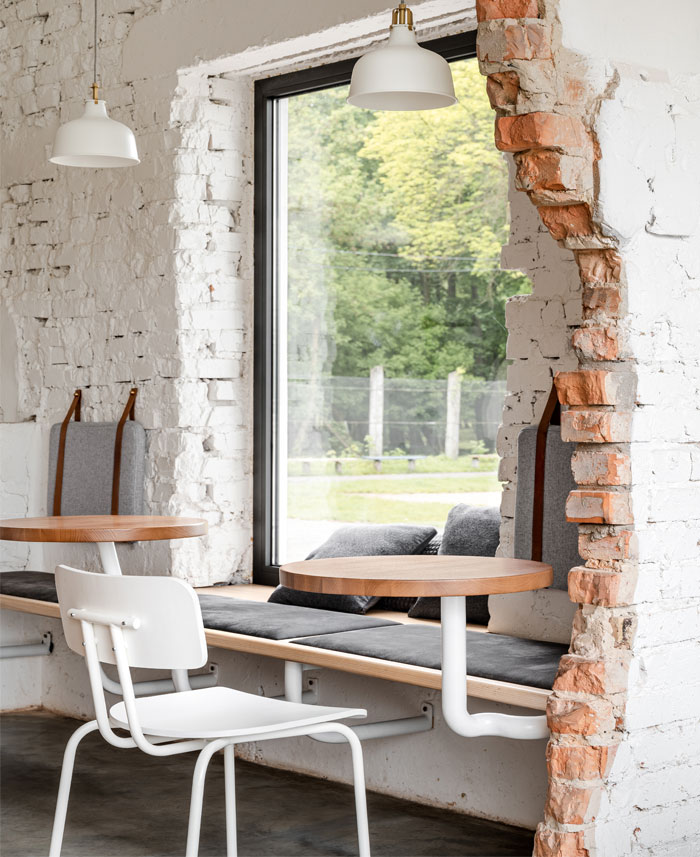 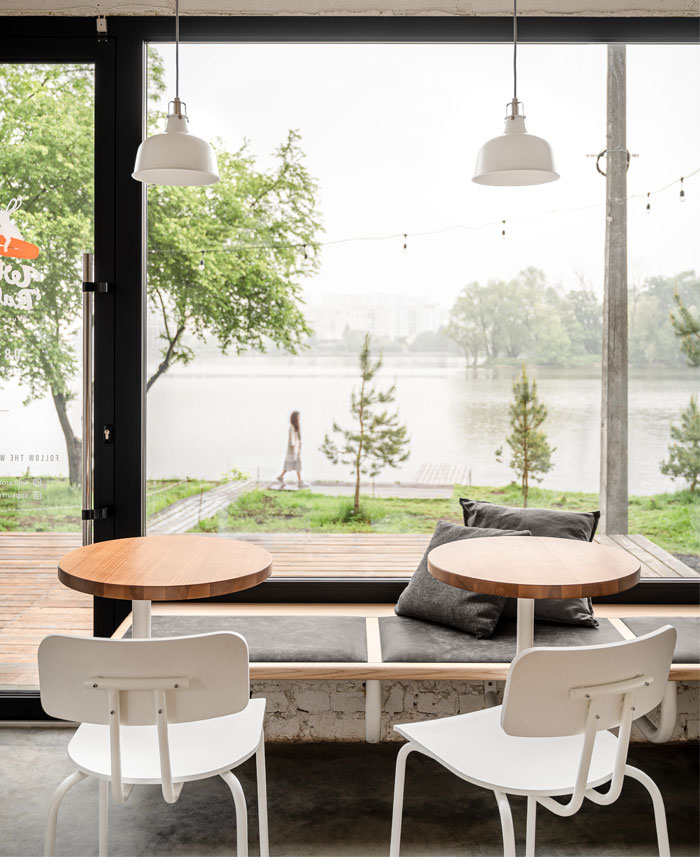