Meters away from some of Québec’s most spectacular landscapes is an unusual new glamping project. Reflection is the work of Québec-based Bourgeois Lechasseur / architects, who have developed a highly versatile approach to get-away rentals. They first experimented with the luxurious Charlevoix Domes, followed by the slightly nostalgic Cabin A. Reflection, their latest endeavor, is a set of two resolutely contemporary cabins in the woods. 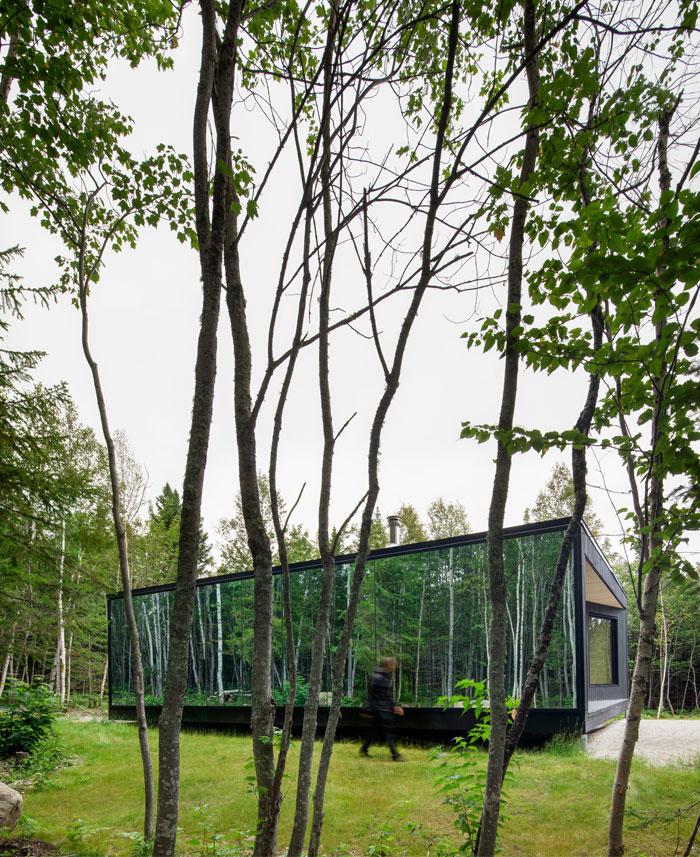 The identical units were built on a flat piece of land close to one of Québec’s most popular ski resorts, Massif Petite-Rivière-Saint-François. The challenge for the architects was to engage guests in an intimate relationship with nature, rather than dazzle them with the overwhelming views nearby. Key to the design was a focus on creating accommodations that would almost disappear among the trees. 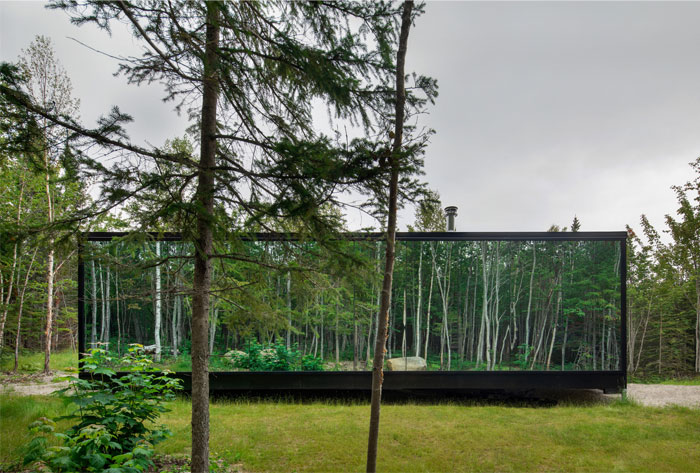 The shared arrival and parking area are accessible through an unpaved road, connected to local hiking trails. To ensure maximum privacy for guests, the two minimalist cabins were built back-to-back, fifty meters from each other, one facing east and the other one facing west. Their most striking feature is a totally glazed façade, set against the forest backdrop. Darkened wooden slats clad the other three façades, reinforcing the sense of immersion among the nearby trees. 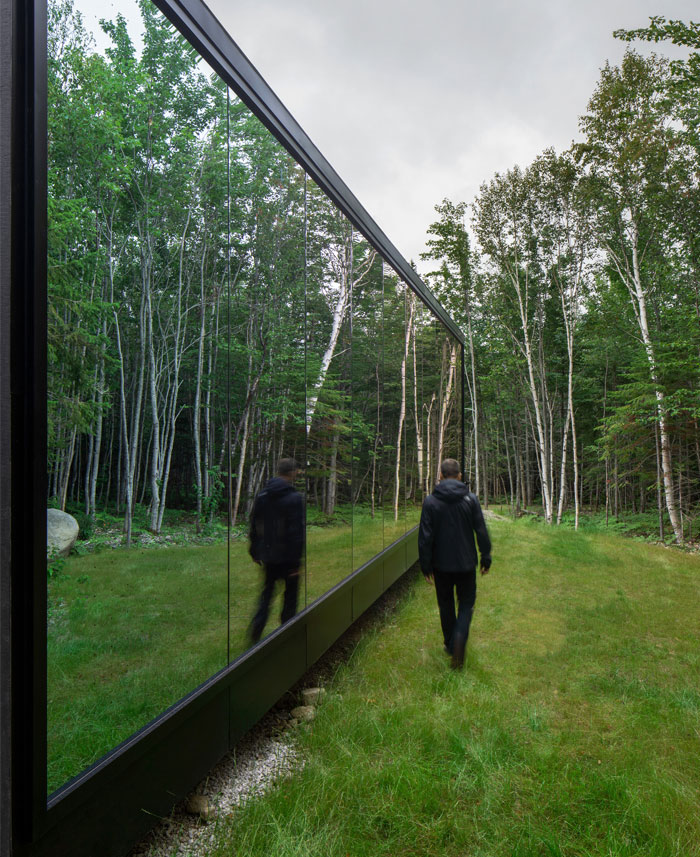 The entrances, off to the side of each cabin, appear to have been pushed inwards, interrupting the otherwise mostly seamless façades. The move is typical of Bourgeois / Lechasseur architects, who clearly enjoy blurring the lines between exteriors and interiors. The dark wood cladding used outside appears to carry through the interior along the entire length of the living area, while the clear pine ceiling used throughout the units is replicated outside. Designed for up to six persons, each cabin features a cozy living/dining area with a fireplace, as well as two enclosed bedrooms and a luxurious bathroom. Guests can also enjoy the relaxing environment of an exterior spa. 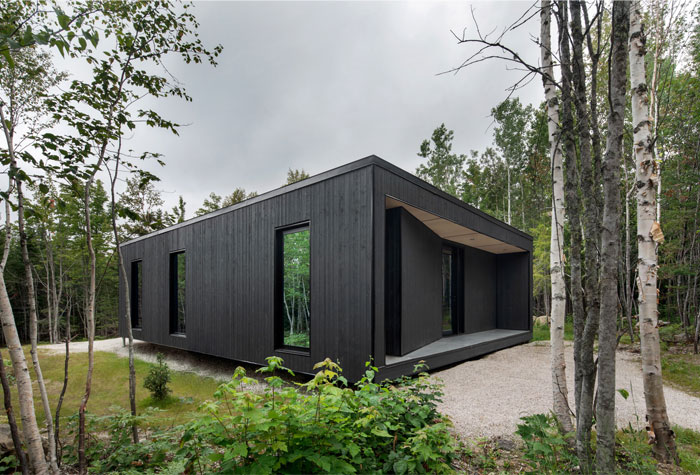 Prefabrication. In this latest project, the architects opted to experiment with prefabrication. Each of the twin units consists of two modules, prefabricated before being shipped to the site to be assembled. Although the process was meant to be relatively straightforward, it led to unexpected challenges, among them a variety of mechanical connections between the modules. Meticulous site coordination was required during the final assembly. Two operations, however, had to take place on the location: the pouring of the radiant concrete slab, and installation of the long, reflective glass walls. 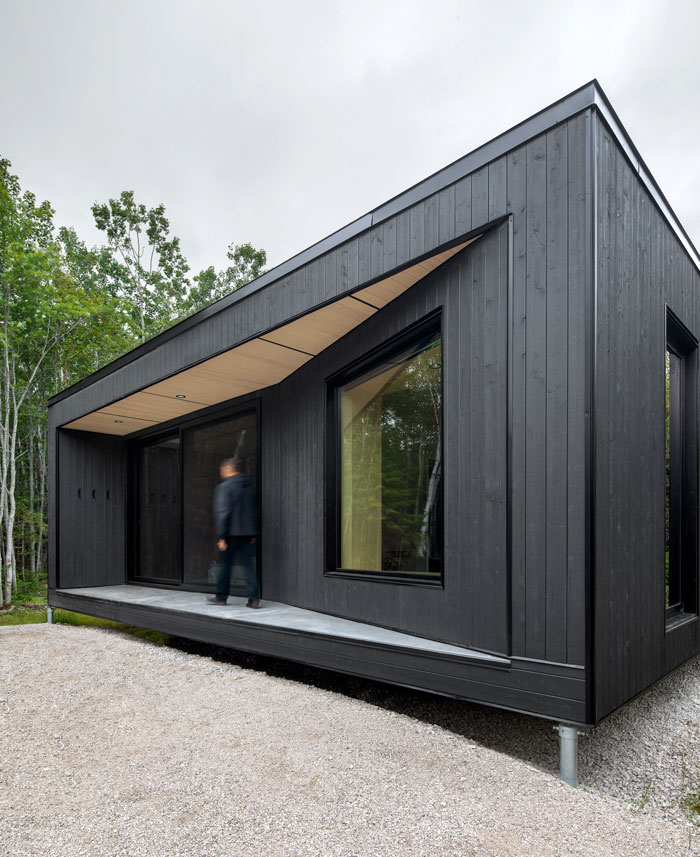 Considerable attention was paid to the treatment of the mirror façades in an effort to prevent hazardous bird collisions. Client-driven research led to a product approved by the well-known Audubon Society, as well as several other bird conservancy associations. Almost invisible to the human eye, bird deterrent window markers were carefully installed on the outside of the glass panes that line the living area. 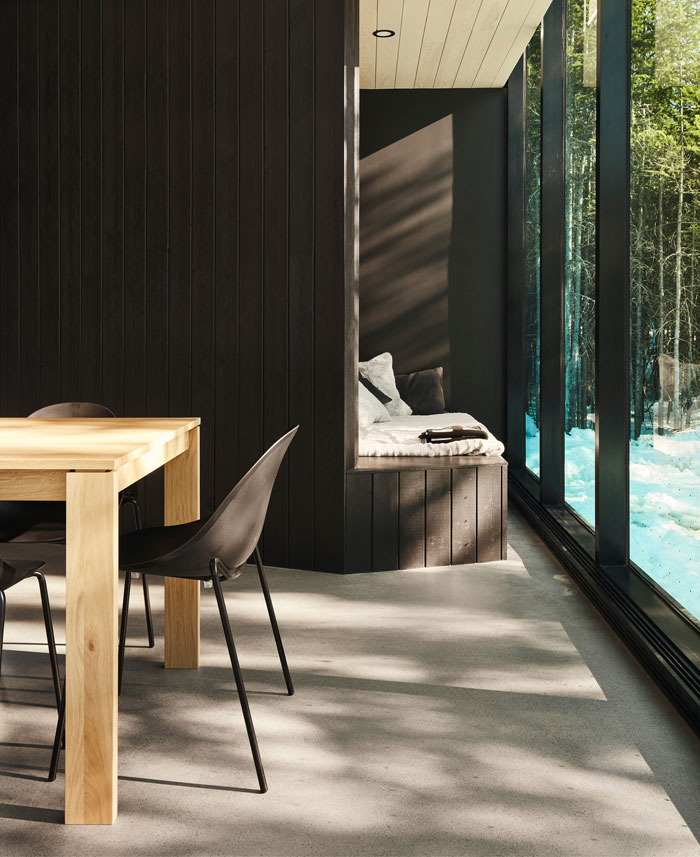 A nostalgic yearning for nature resides deep in the minds of many Canadians, often conceived as rustic log cabins tucked away in the woods. Today’s travelers, however, seek comfort and poetry, something Reflection will also provide as guests immerse themselves in the surrounding forest. 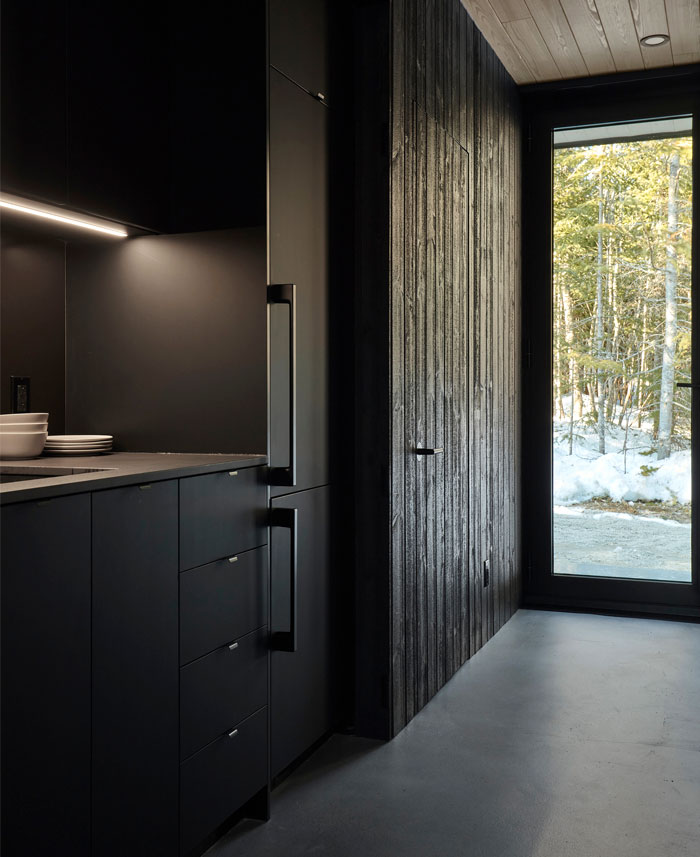 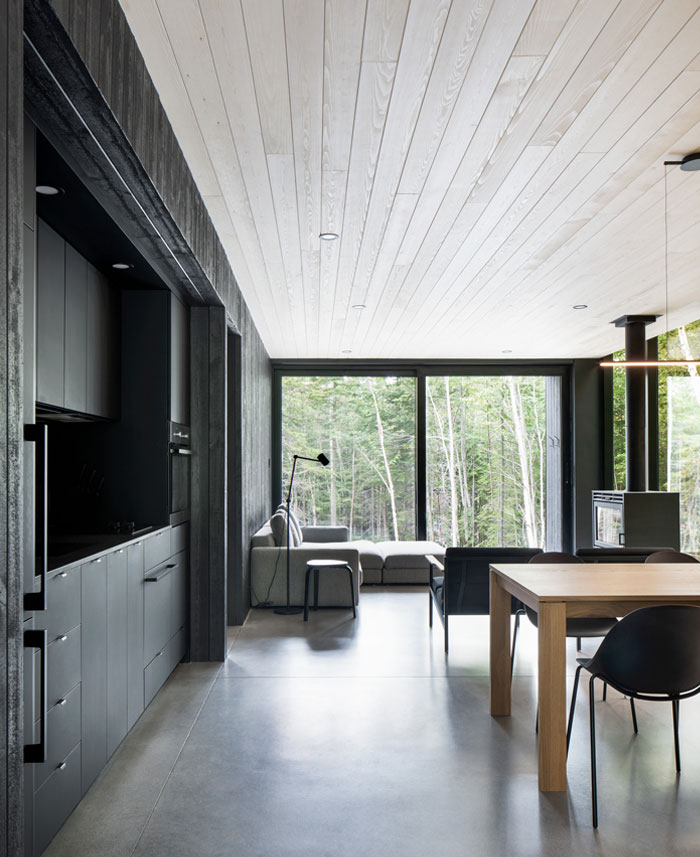 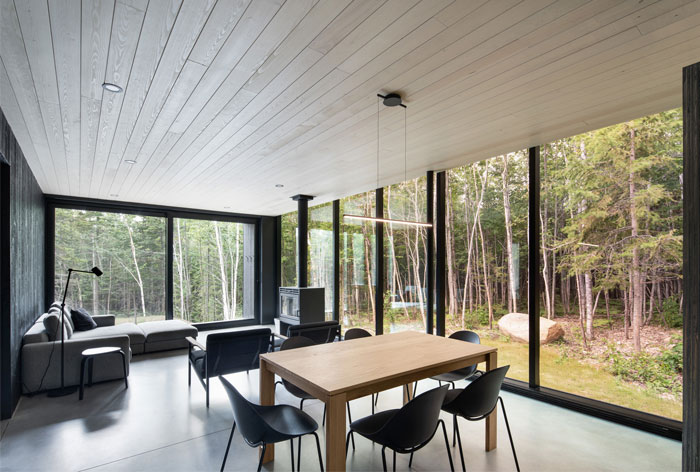 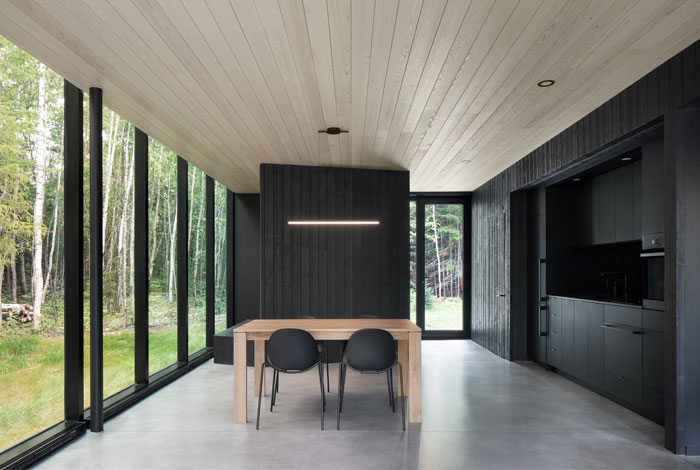 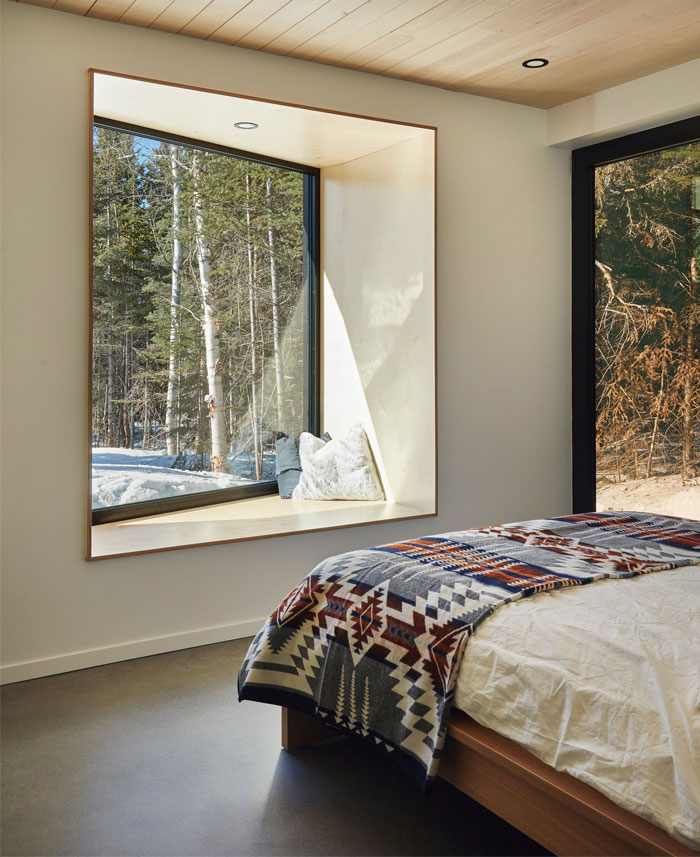 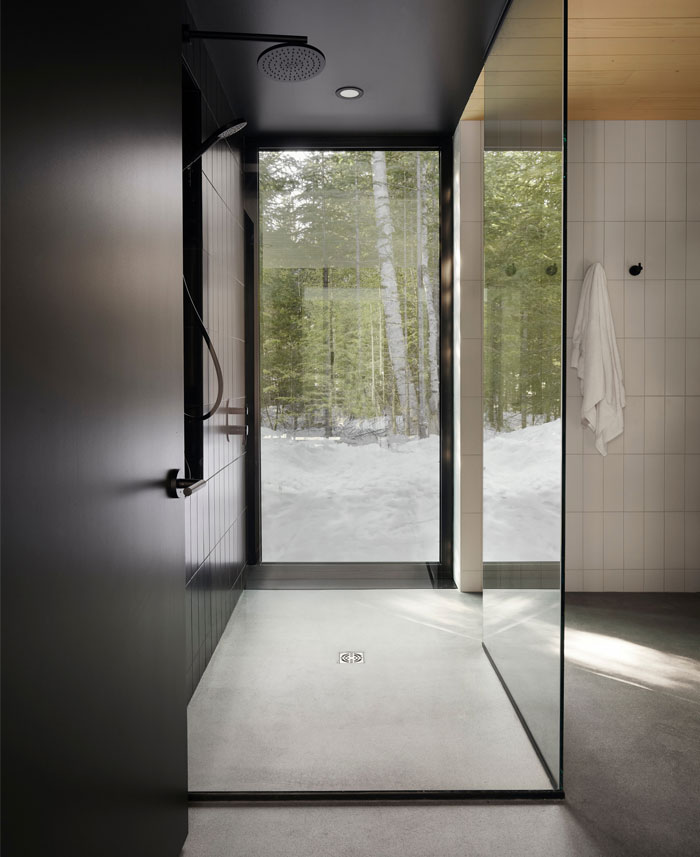 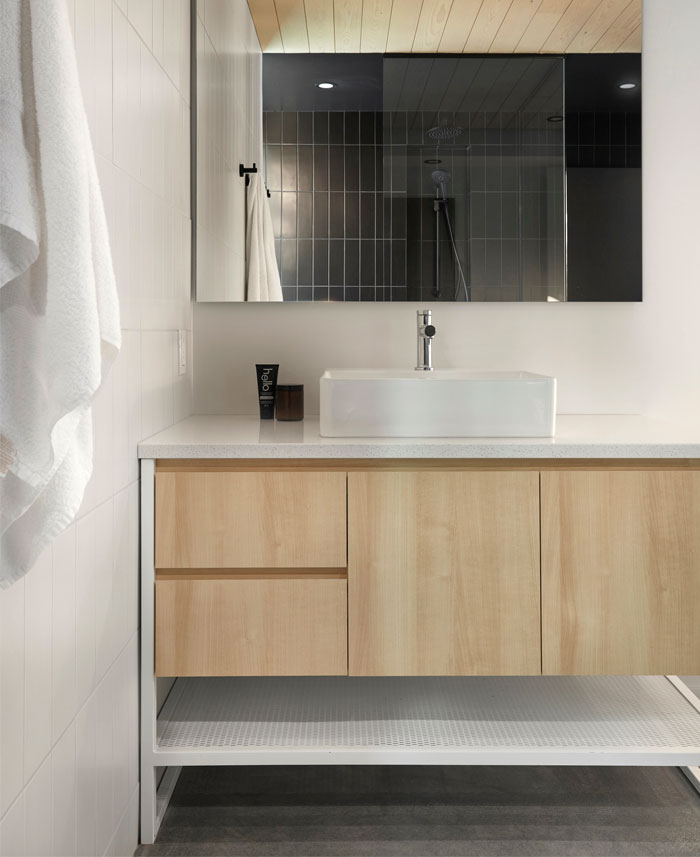