The background of this project did not promise anything extraordinary. The owner set a rather trivial task for the designer: the apartment is a transit base between business trips, equipped with inexpensive furniture. The defining moment was the approval of the visualization. Having seen the visualizations of the living room, where Alta Idea Studio usually starts its work, the client completely reconsidered the role of this property in his life! And from the status of “transshipment”, it moved to the status of “my apartment!”. Moreover, from that moment on, the client no longer strictly limited the budget and gave freedom of action to the designer. How did you manage to convince the client and more importantly: how did the designer implement her ideas, which, as it later turned out, fully corresponded to the client’s vision? 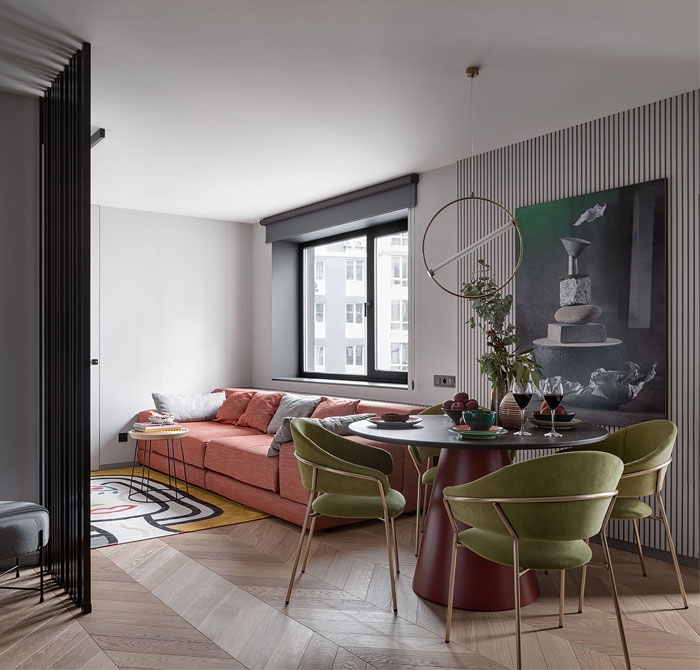 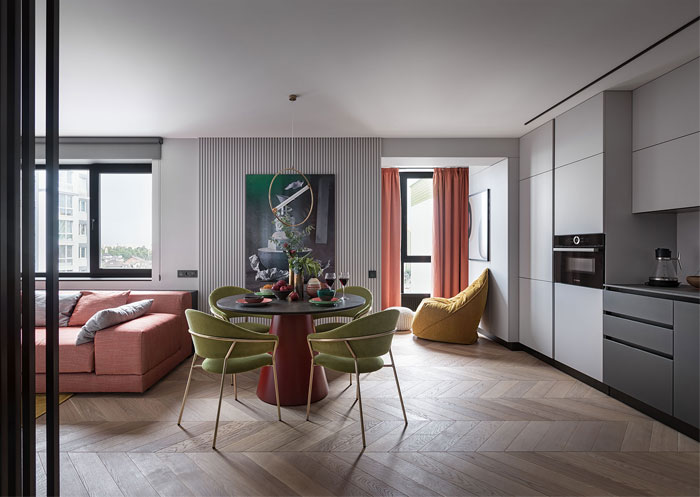 The designer Julia Baydyk decided to demolish all the extra walls between the rooms, which at that time were so small that they seemed to be branches from the corridor and not full-fledged rooms. Part of the living room, too elongated in length, has been converted into a dressing room. In the same way, it turned out to “carve out” a lounge area with a panoramic window. Initially, the client wanted to make a hookah area in the lounge, but as soon as he paid for natural parquet, he changed his mind. The floor in fact became too beautiful to risk it. 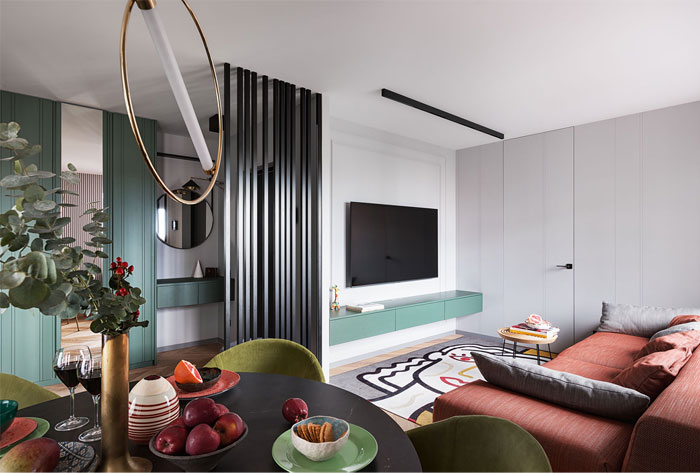 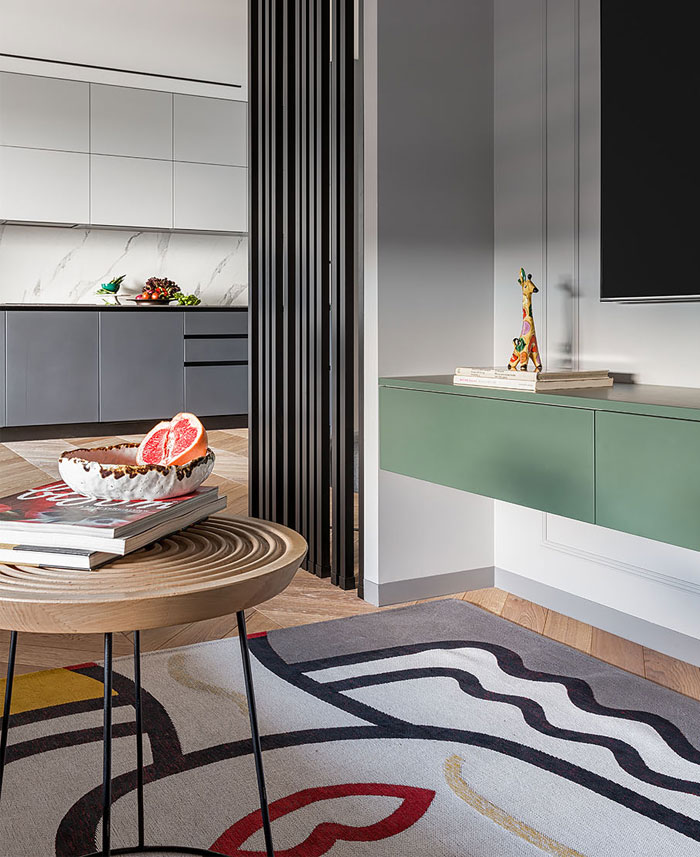 In general, the entire space is dressed in calm natural colors, while the common area is enlivened by interesting unusual colors that translate the entire design solution from a strict minimalism format into a comfortable modern living. 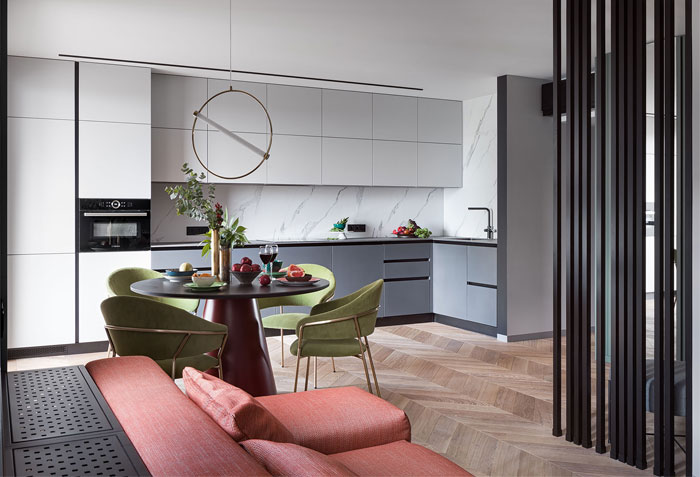 To pick these bold “color spots” correctly, the designer of ALTA IDEA studio observed the client and his lifestyle. So, she decided to decorate the hallway and TV area in a marsh color, noting that the customer’s car was painted in this color, as well as his smartphone. 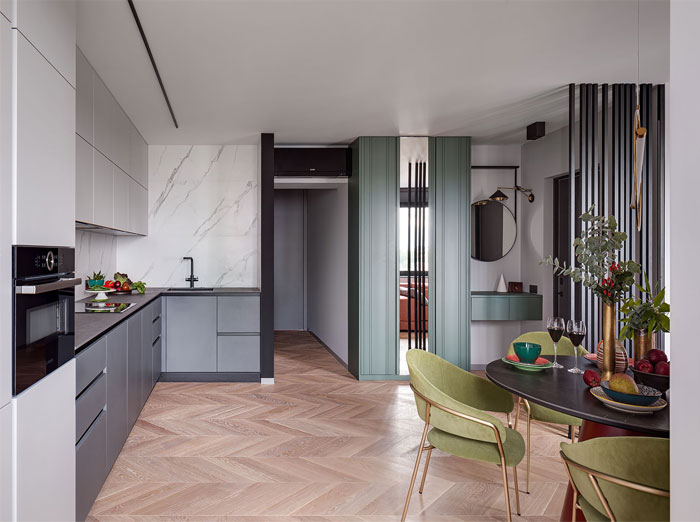 The rest of the colors were chosen by the designer from a rather bold palette. Nevertheless, their shades, nuances, as well as the materials through which they are “fed” into space are very masculine. For example, the Jazz chairs from the Italian factory Pedralli in the dining area are not just green; it is a pleasant, muted, grassy green. The terracotta sofa matches the table with a rich brick base. Bright curtains can also be seen from the lounge area in the living room, which, in combination with a sofa and a table, brings warmth and comfort to the interior. Thus, the mood of the living room is ideal for the single status of the customer: it will be pleasant to meet with friends here, to spend an evening filled with music, laughter and wine. 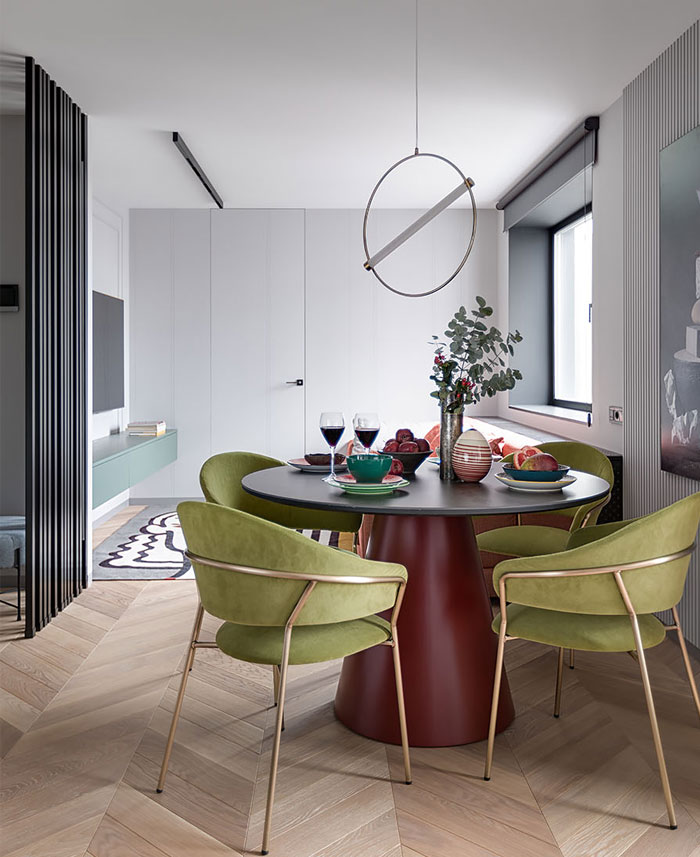 It is interesting that all the repairs from A to Z, as well as all purchases, were completely entrusted by the customer to the designer, because in the process of communication, he felt heard and understood! Only the choice of the sofa was controlled by the client with special attention, because he loves, as he himself says, “to sit down and drown”. Therefore, the designer, together with the client, came to production several times to check that the softness of the product meets his expectations. 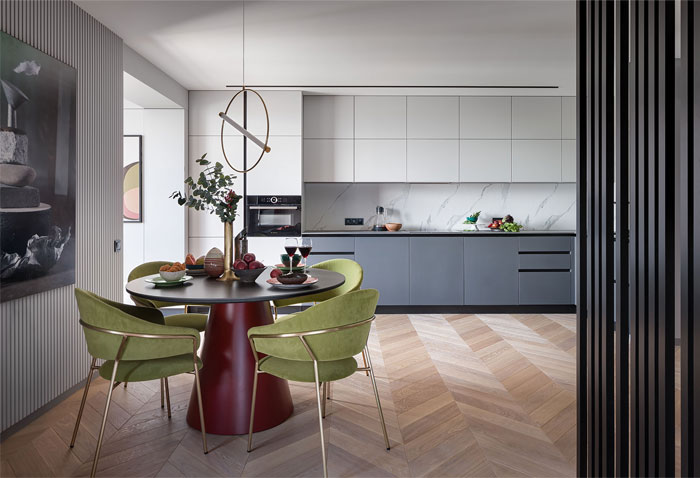 Another original solution related to the sofa concerns how the radiator is decorated right behind it. The interior designer Julia Baydyk proposed to sew up the radiator with a metal box, “raising” it in height with the back of the sofa. Thus, the box performs two functions: due to the fact that the metal heats up from the battery, heat transfer is even more efficient: plus – a shelf for a book, phone or tablet is right at hand! 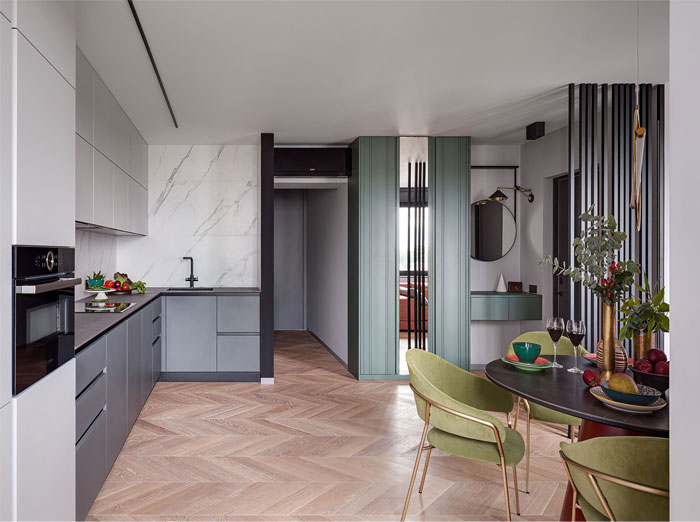 The customer’s lifestyle inspired the designer to select damage-resistant, durable and high quality materials. Therefore, a stone was purchased for the kitchen countertop, on which you can sharpen knives with sparks. Since there is not much space in the apartment, the designer hid all appliances behind the minimalistic facades of the kitchen, including a washing machine, meters, a boiler, and organized a place for storing the cleaning products. 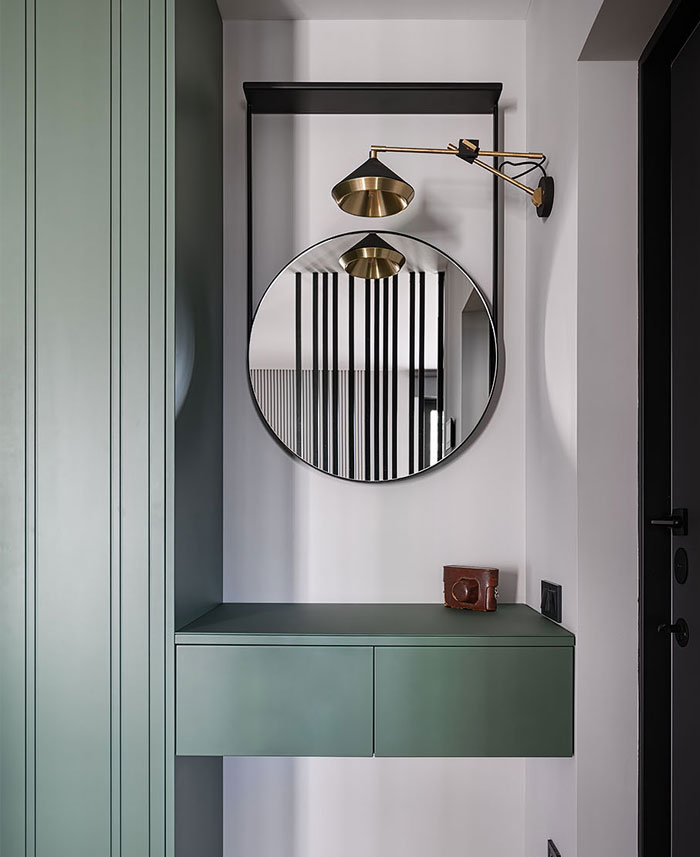 The design of the bedroom is perfectly combined with the rest of the space of the apartment and, at the same time, it is a completely different atmosphere. If the living room, kitchen and hallway look very cheerful, the bedroom, on the contrary, is even more restrained, courageous, and especially romantic. So, the line of the window sill passes into the line of the soft headboard and continues in two-tone curtains. A plaster strip is installed behind the head of the bed, behind which an unusual lighting creates the effect of a soft and beautiful glow in the room. Brass English Bert Frank lamps perfectly complement this setting, built on geometric transitions of different shades of chocolate and beige. There is also a backlight behind the curtains. 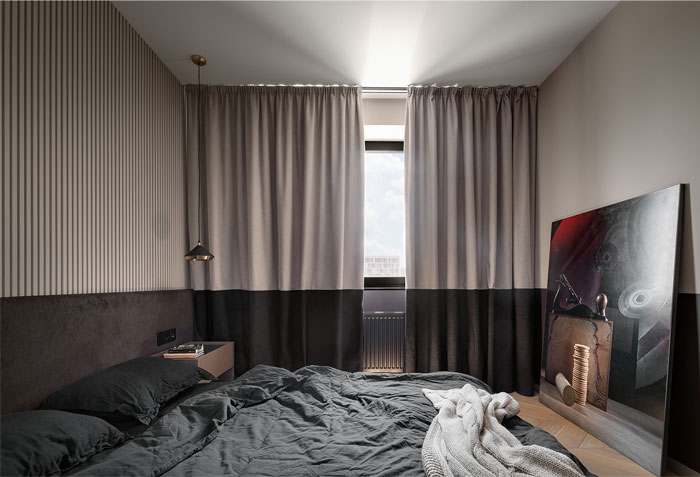 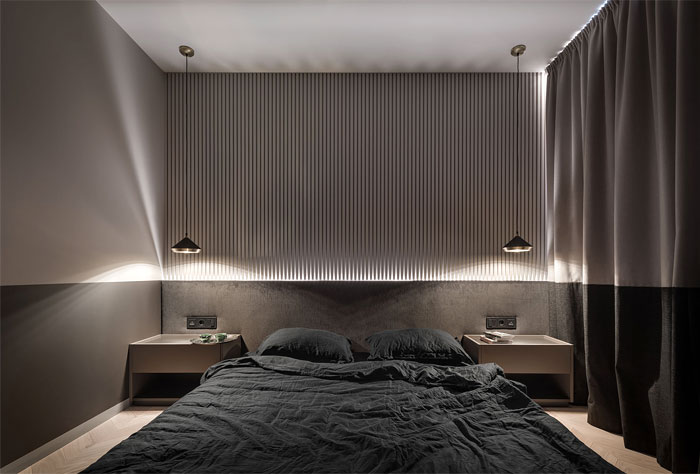 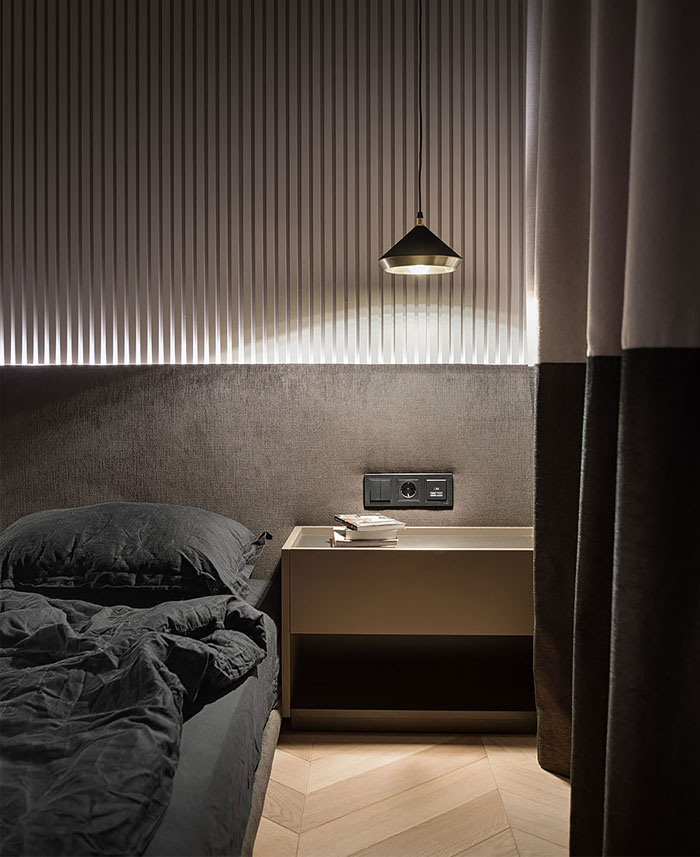 While still in the rendering stage, the bathroom of this apartment received thousands of likes and hundreds of saves. A subtle geometric pattern is transferred to the plane of the ceiling. In addition to tiles, the work of the painters is also used in this bathroom, creating a visual effect of fish scales: the space plays and neatly shimmers with different nuances of white, gray and black. 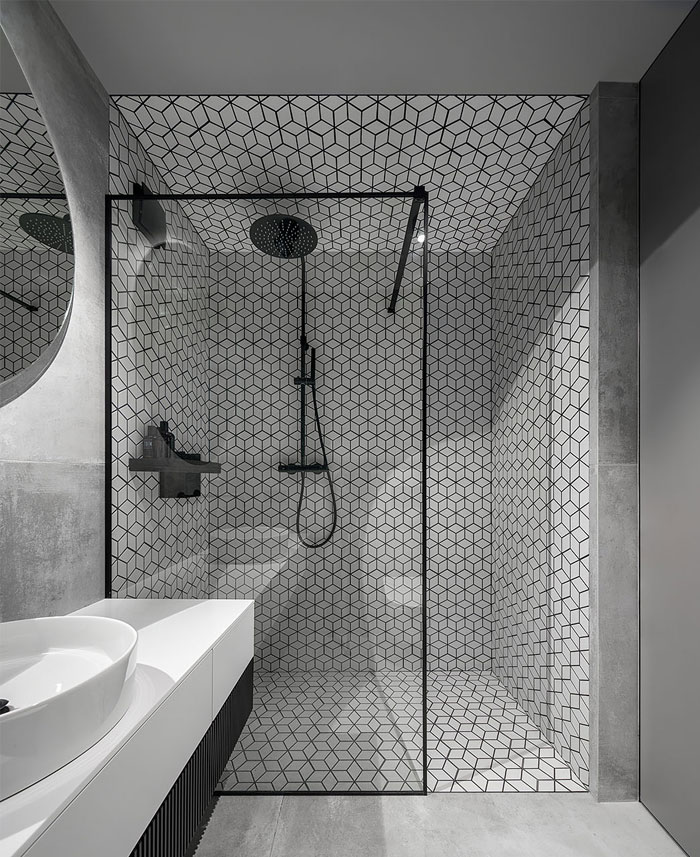 Thus, from an absolutely ordinary request, a completely extraordinary interior was obtained – as young and charismatic as its customer! 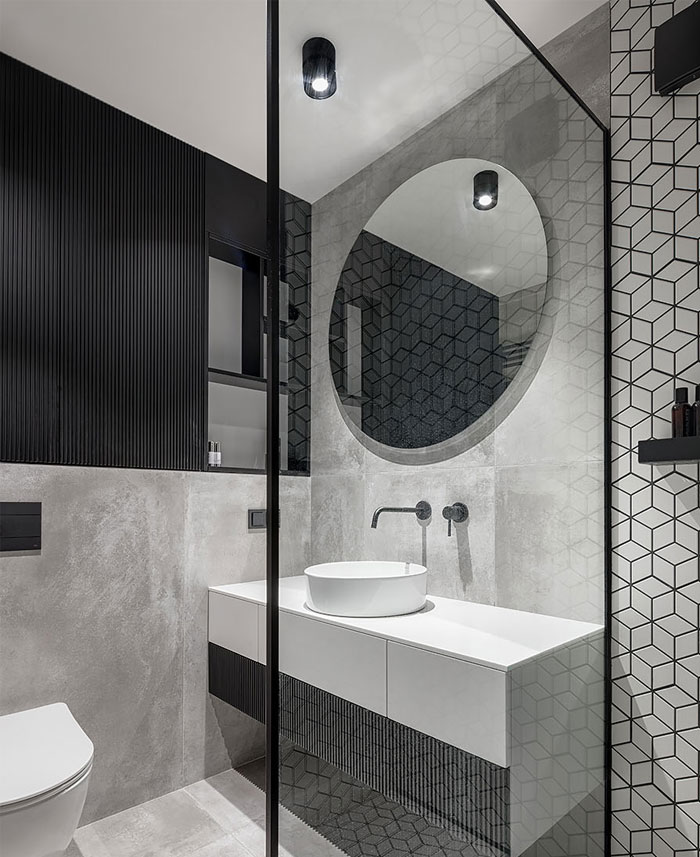 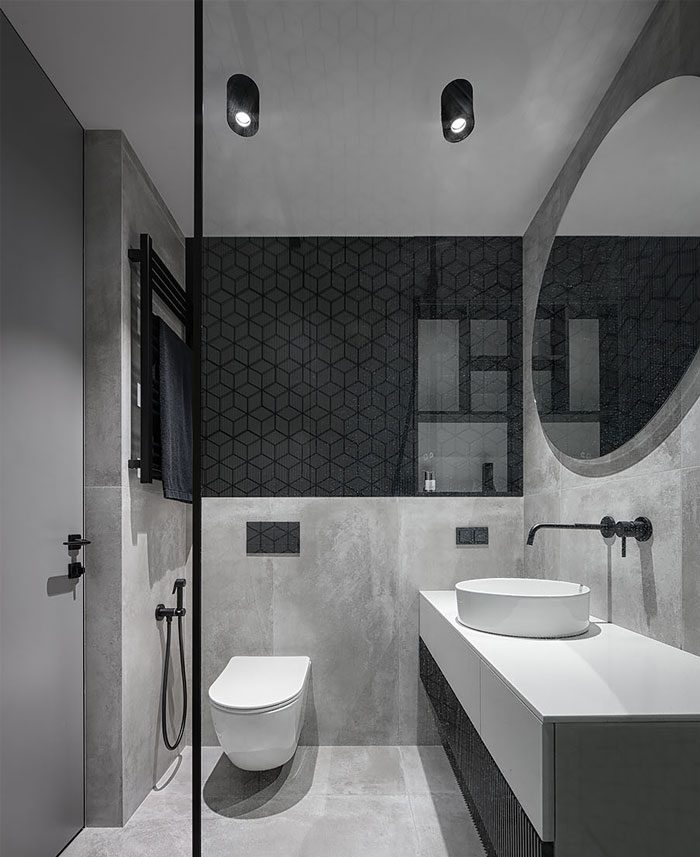