Using the bones of a pre-war Queenslander house, Joe Adsett Architects has designed a palatial home in Brisbane’s Paddington that draws on Spanish Revival influences to create spaces whose charm lies in balancing their grand scale with a warm and tactile nature. 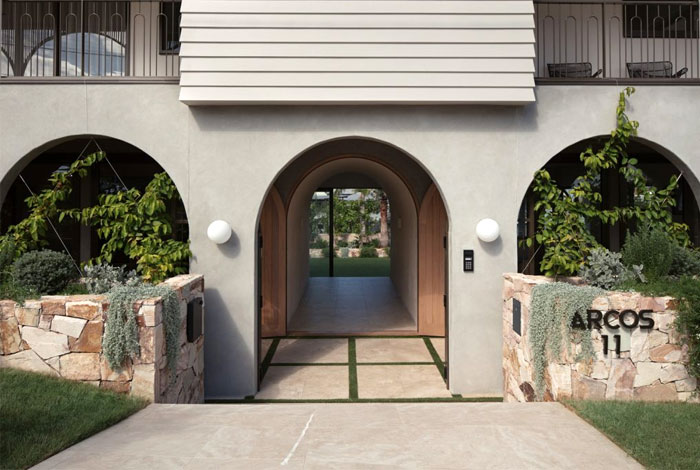 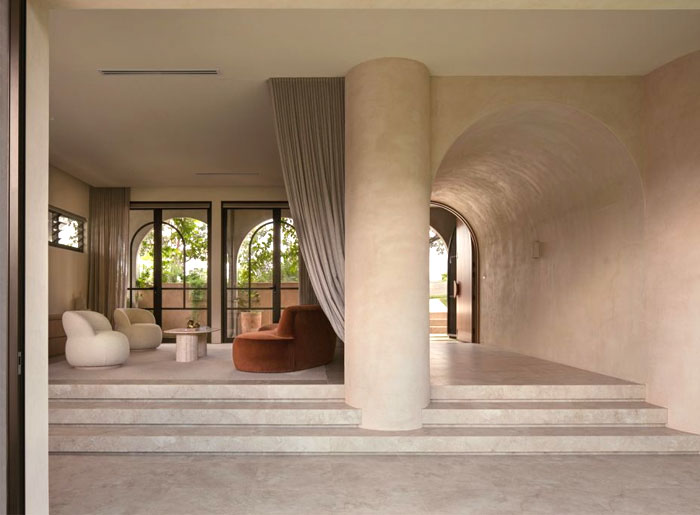 Entry into the home takes place through a dramatic, softly-litarched tunnel of rendered concrete. Emerging on the other side, visitors are met with a series of awe-inspiring interior and exterior spaces. Dubbed ‘Arcos’ (Spanish for arches), this is the home of Robert Gray, managing director of high-end construction company Graya, and psychologist Meghan Gray. Graya built the house, which aside from being the couple’s ‘forever home’ is also used as a setting for fashion shoots. 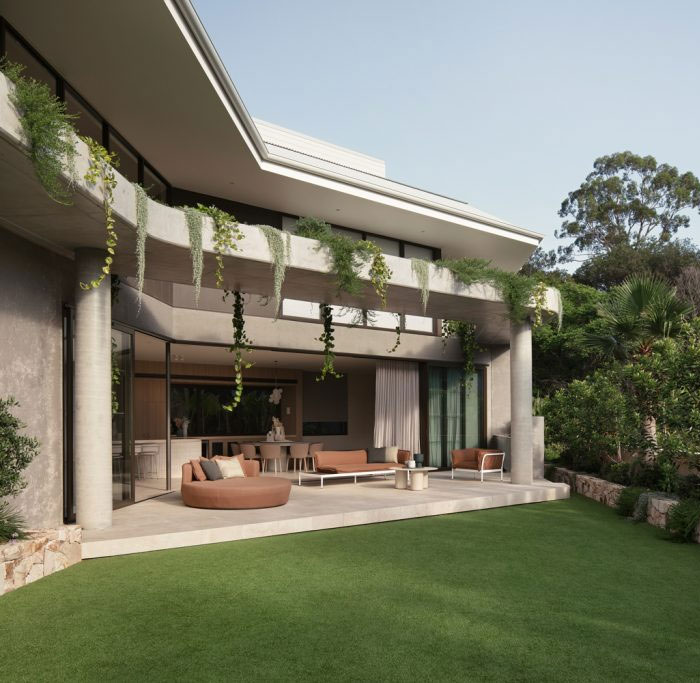 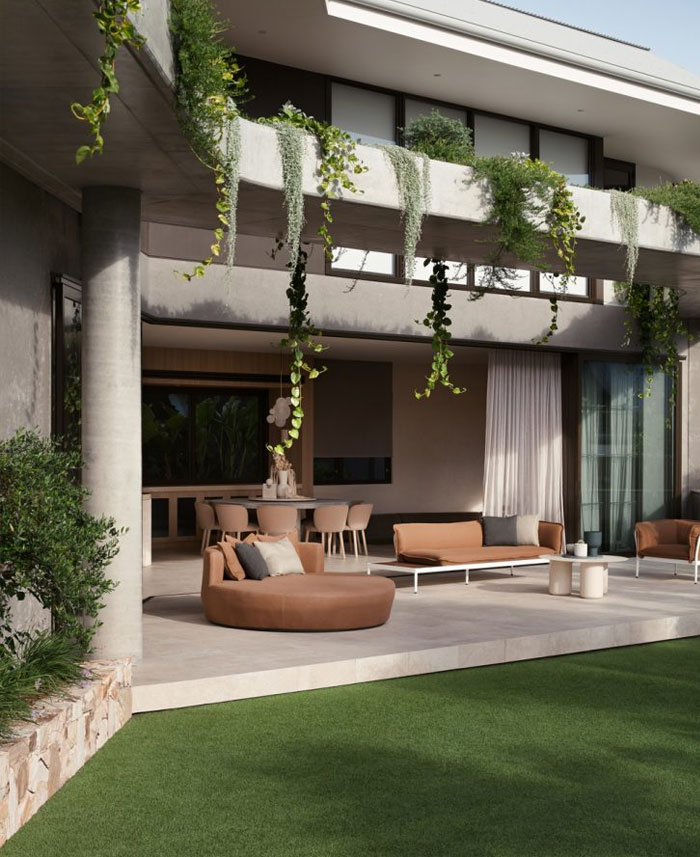 The 820m2 block the house sits on was a rare find in Paddington, and this informed the couple’s decision not to hold back when it came to the grandeur of the home. With Graya having constructed a number of Joe Adsett Architects’ projects, including Joe’s own home, BoomerangHouse, the strong existing relationship was the foundation for the design of Arcos. Together, they arrived at a home that carries over three storeys, with five bedrooms, six bathrooms, three living spaces, and an eight-car garage across 1000m2 of floor space.

The rendered concrete arches on the lower level of the house play upon the existing structural rhythm of the Queenslander, as do the lightweight materials used on the upper storeys. The weatherboard façadeof the existing house makes an appearance from the street front, where it protrudes above the arched entranceway. Along with the roofline and upper verandahs, this helps the house to relate with its more modestly scaled neighbours. 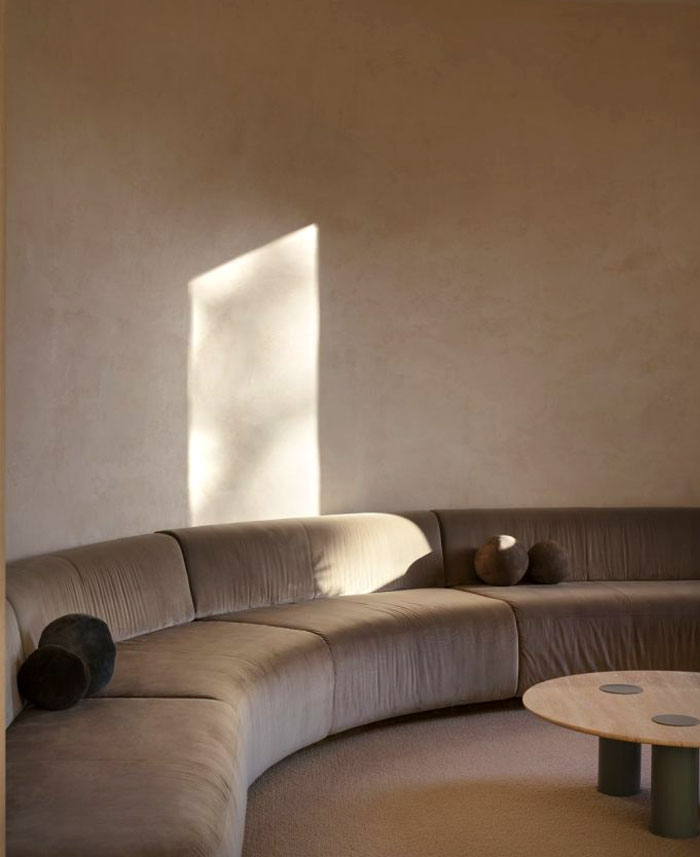 Inside, the Queenslander is forgotten, and the curve is king. The interior’s arches, curves and columns reference the Spanish Revival style of the architecture, while also giving the spaces a sense of loftiness and allowing for plenty of natural light. The most significant curve is the sweeping staircase that links the three floors together and provides opportunities for interesting play of light on the rendered concrete walls. “The staircase is a refinement of the curved staircase designs our office has been experimenting with over the last few projects,” says Joe. 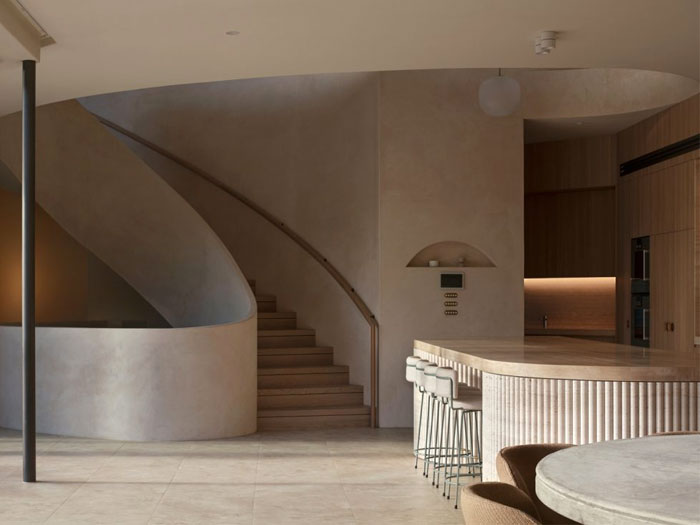 Upstairs, bedrooms are lofty and spacious, with plenty of soft furnishings and close connections to sumptuous ensuites. Bathrooms again reflect the Mediterranean style of the house, with the master ensuite complete with a circular bathtub positioned spa-like below a circular skylight. Behind it, a curved wall hides an industrial style double shower. 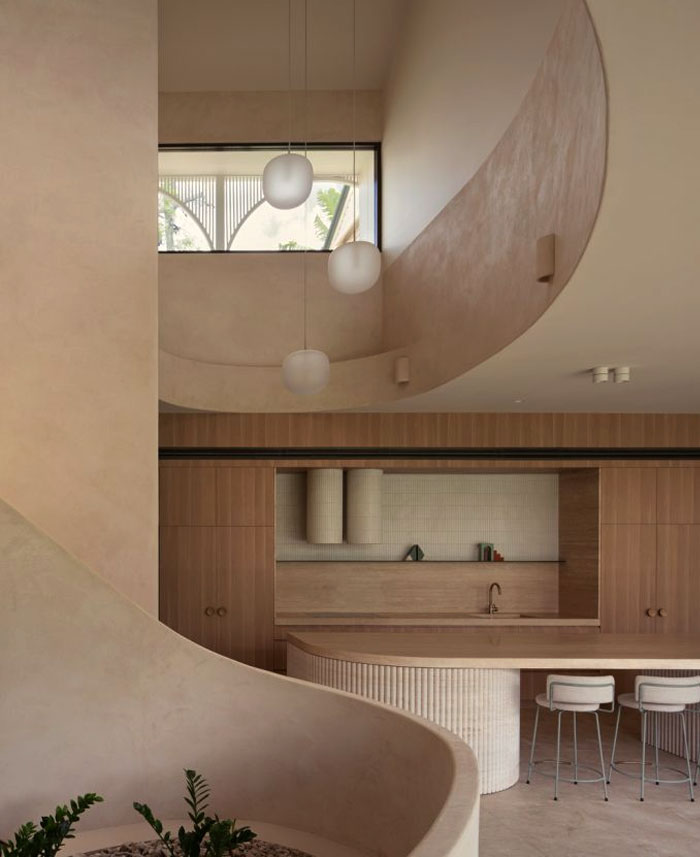 The curves create a sense of embrace and the rendered surfaces’ tactility invites physical engagement with the built form. Intimate moments are created through the use of congregations of seating and well-placed lighting. In the kitchen, the rounded island that features vertical column-style detailing on the front, echoing the curves of the nearby stair, encourages circulation and social interaction. Furnishings too are chosen to instigate relaxation and conversation, such as the custom curved velvet sofa in the sunken living room that provides a place for friends and family to congregate after dinner. 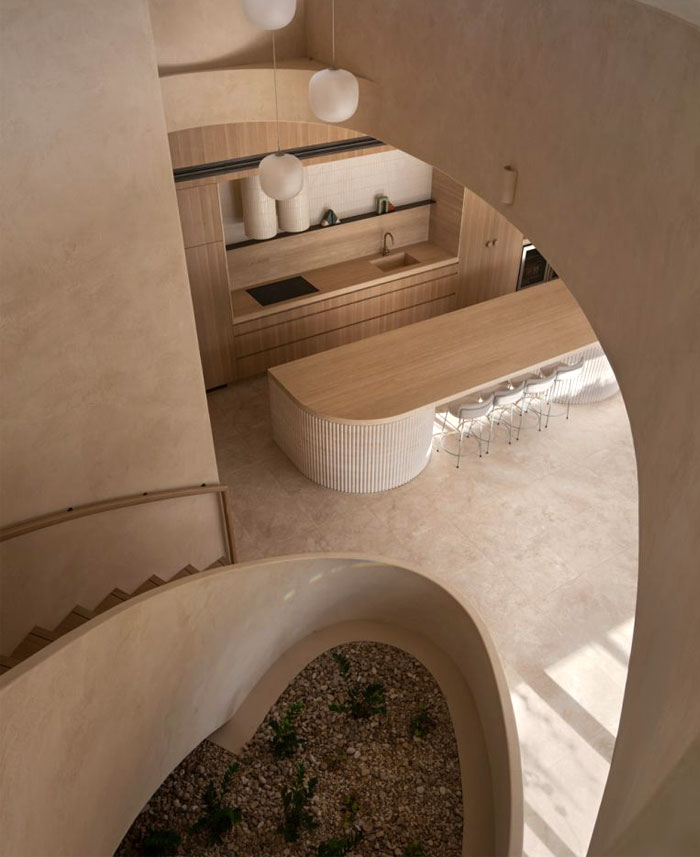 The colour and material palette is largely governed by the rendered concrete, which provides a soft, neutral base throughout the house. Where additional materials are introduced, there remains a sense of unity and cohesion, such as in an elevated sitting room near the arched entrance way that features blond oak timber cabinetry with curved edges that melt into the walls. Oak is also used for the kitchen, where it provides a break away from the soft tones of the rendered concrete and lends some contemporary detailing to the space while tonally complementing the base palette. 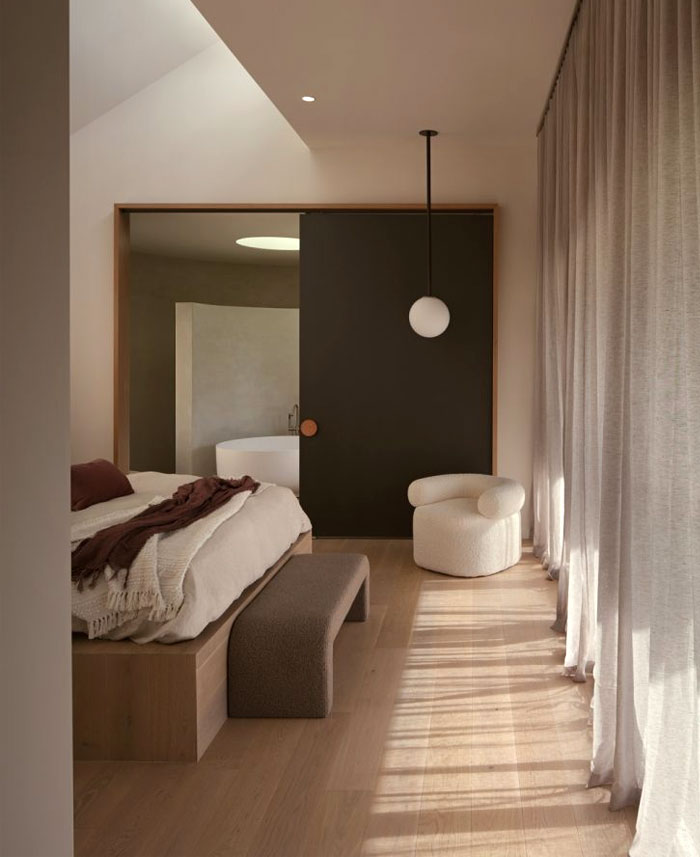 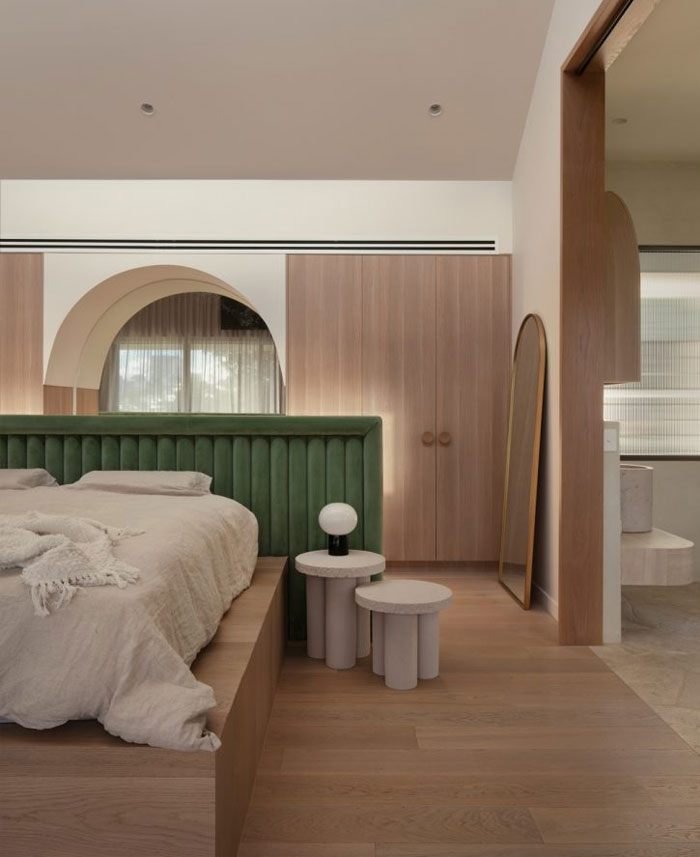 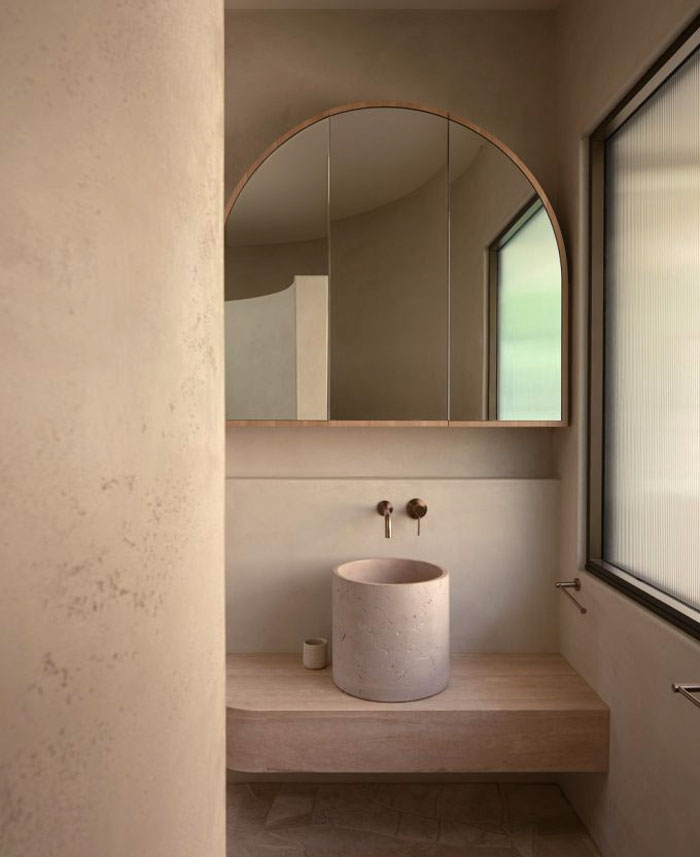 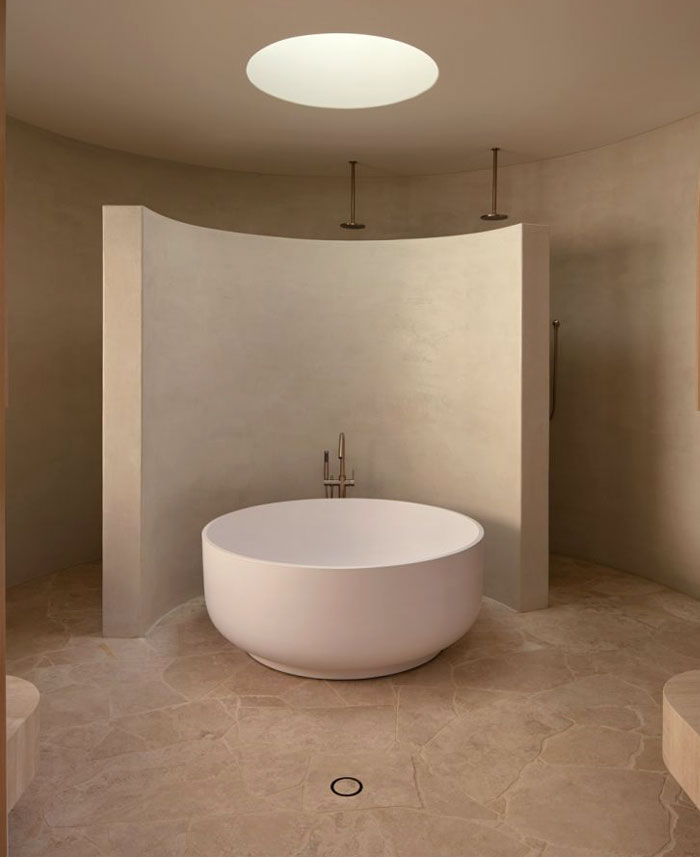