The house is inserted in a rustic land in Santa Maria, in the Pla de Mallorca, the flat area in the center of the island, surrounded by vineyards and protected by a pine forest that the client has been planting for years, with sun all day and panoramic views of the Tramuntana. 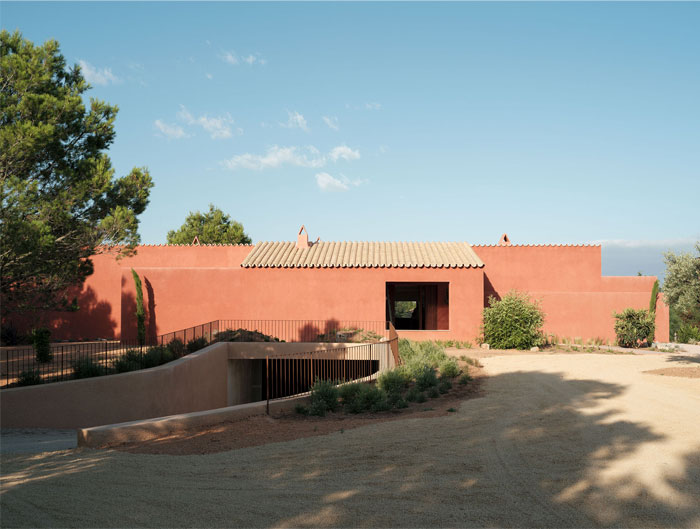 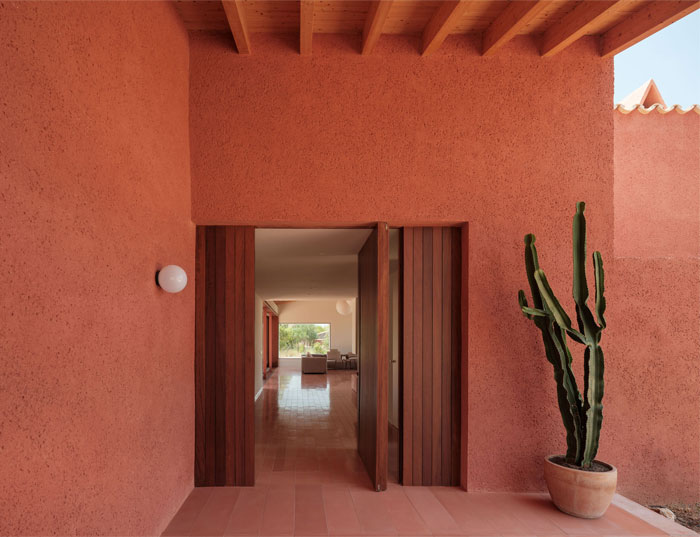 The layout of the plant refers to Jose Antonio Coderch; the house program is developed on several axes that are articulated along a series of walls arranged in a north-south direction. 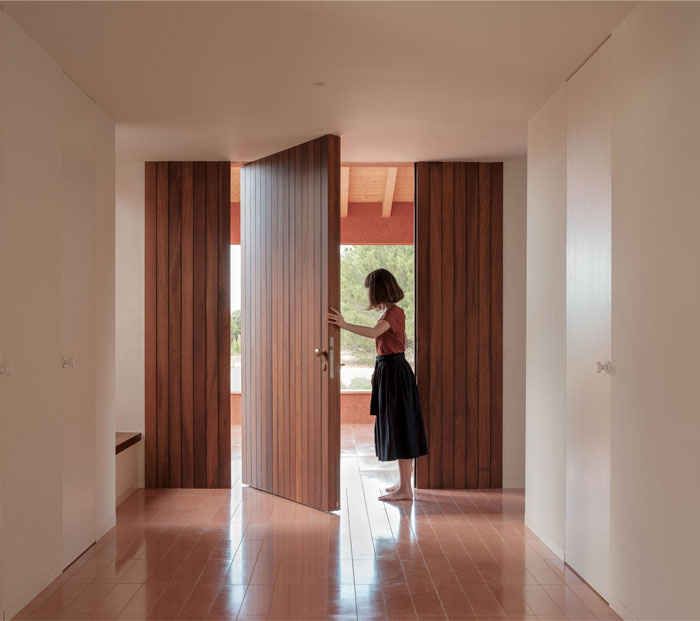 The access is made through the pine forest from the ‘camí’ until we reach the house, that appears totally closed, recreating the local Arab influences. A curved ramp leads to the entrance through a wild garden parallel to one of the walls. Once on the porch, a large floor-to-ceiling pivoting door opens inviting us to enter. 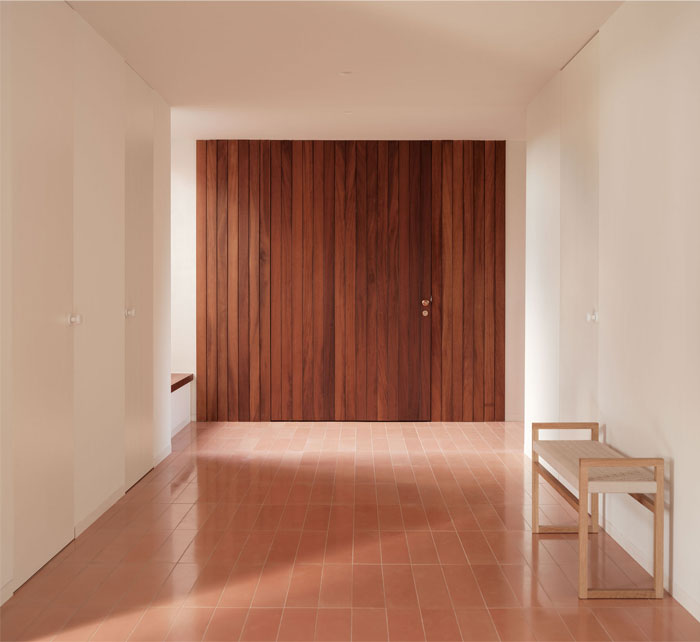 The foyer, which stretches to both sides of the longitudinal courtyard – a forest of bamboo trapped between two long walls – gives us access to the bedrooms. The guest room occupies the first volume of the house and has its own patio. The rest of the rooms are located in the south wing, two twin bedrooms with a shared bathroom, open to the garden, and the main bedroom, which opens south to a large open patio with a tinted concrete bench. 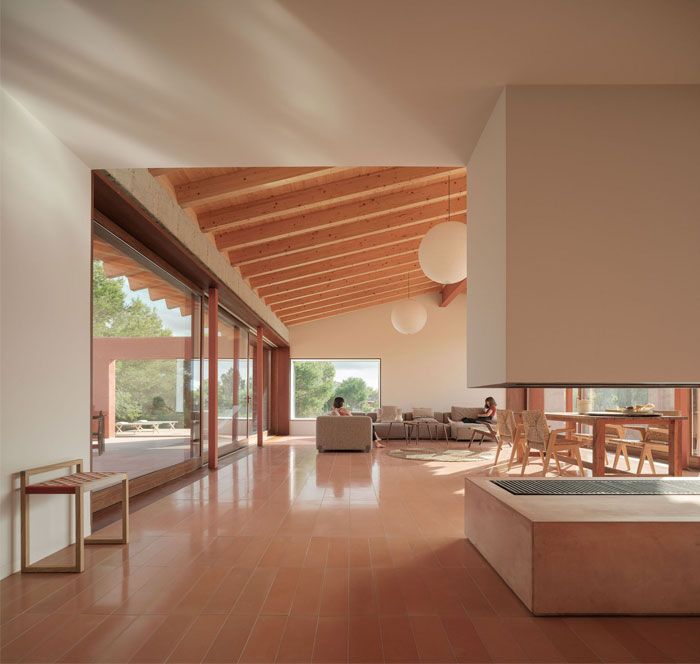 The kitchen is to the North, independent but visually connected to the living room, and has its own patio open to the twin mountains of Alaró. And finally the living room, which is situated in the widest bay of the house, opens up to the panoramic views over the mountain and the garden. The asymmetric inclination of the roof allows it to open more to the south than to the north, protecting the large windows from the incidence of the sun, which in turn, when open, allow for cross ventilation to better withstand the high temperatures of summer. An exterior window is cut into the west wall and visually connects the living room with the pool, allowing water reflections to dance in the beams of the room. When its blind – in the same tone as the wall and with flanges in metallic tones – is closed it filters the light, and the room acquires a red tinge. 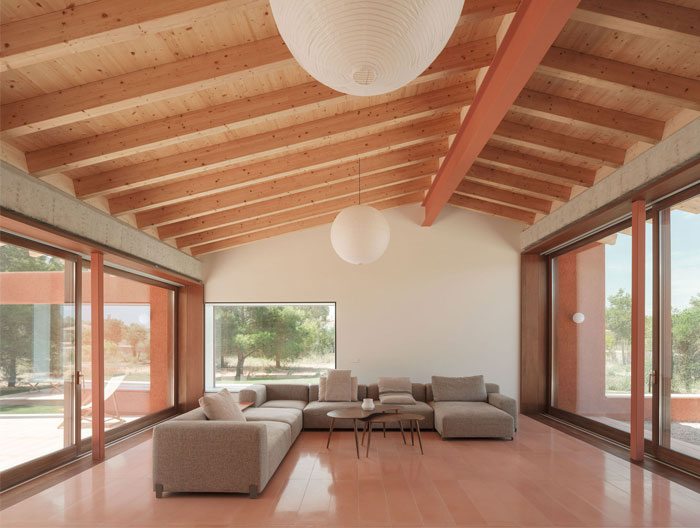 The pool is detached from the house so it gets its own space, and slides as another volume of the house that emerges from the ground, allowing to swim from the Tramuntana to the Puig de Ses Coves. 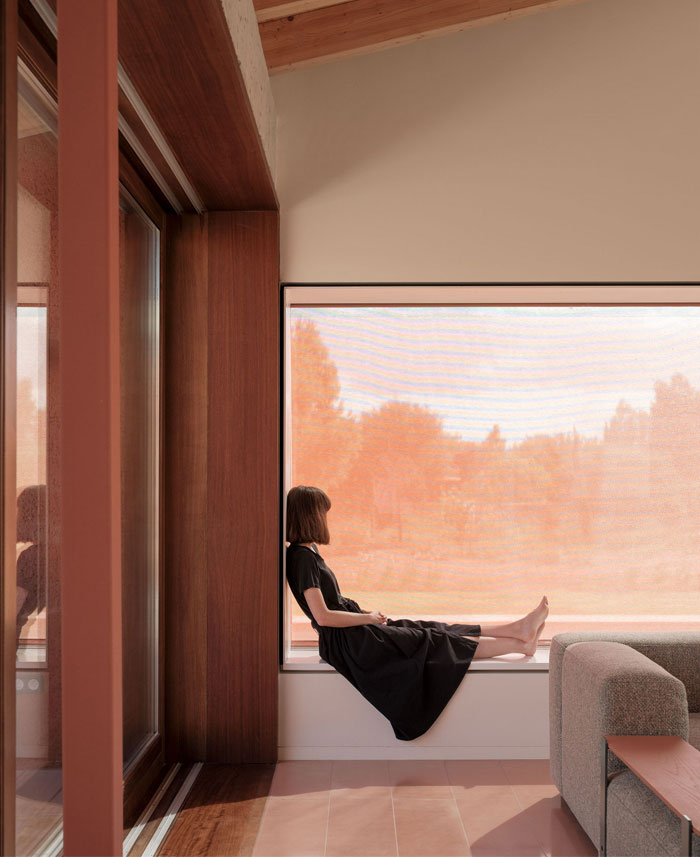 A specific materiality is proposed to integrate the house and almost camouflage it with the local landscape. On the outside, the walls are plastered with a rough rust coloured mortar making the house blend in with the land. 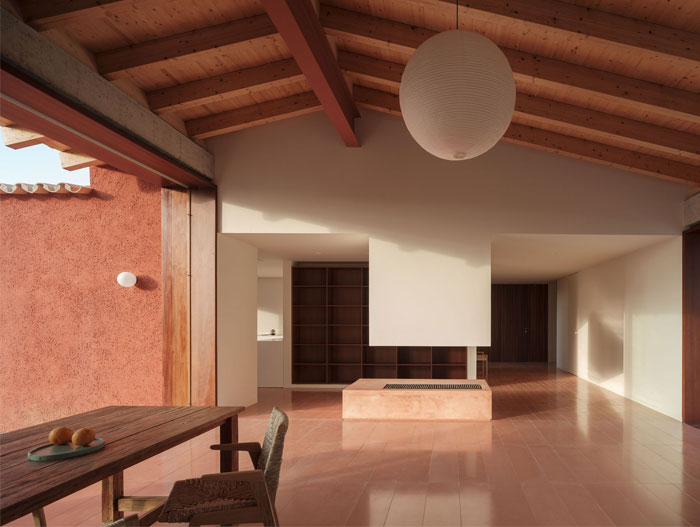 Inside, the palette is reduced to tinted concrete of the same reddish color, white, copper and natural wood, giving the house a warm and natural atmosphere. The floor, locally manufactured by Huguet and custom designed for the project, goes in and out diluting the limit of the house, while a series of elements also made of red tinted concrete -washbasins, showers, fireplace and benches- equip the different spaces. This limited palette of materials reveals the simple geometry of the building and creates a visual and tactile continuity between the architecture and its surroundings. Monochrome and vibrant, the house changes hues during the day, reacting to the sun and land, revealing movement through shadows and changing material nuances. 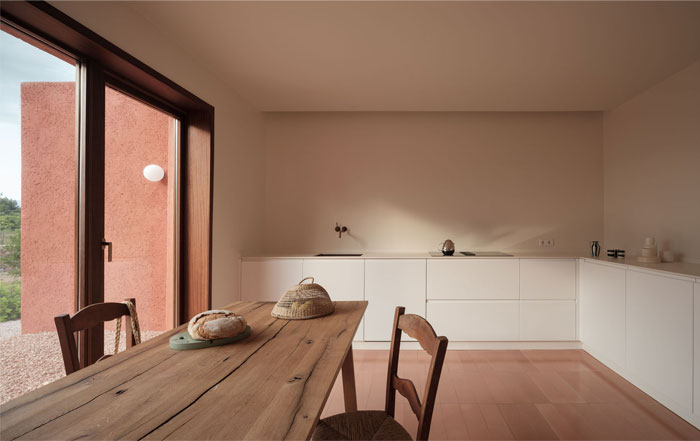 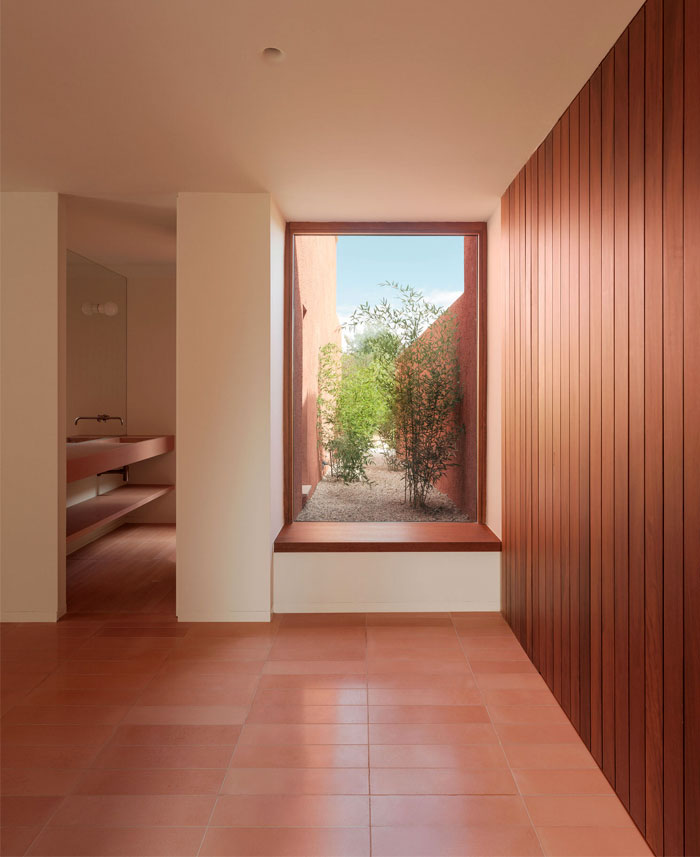 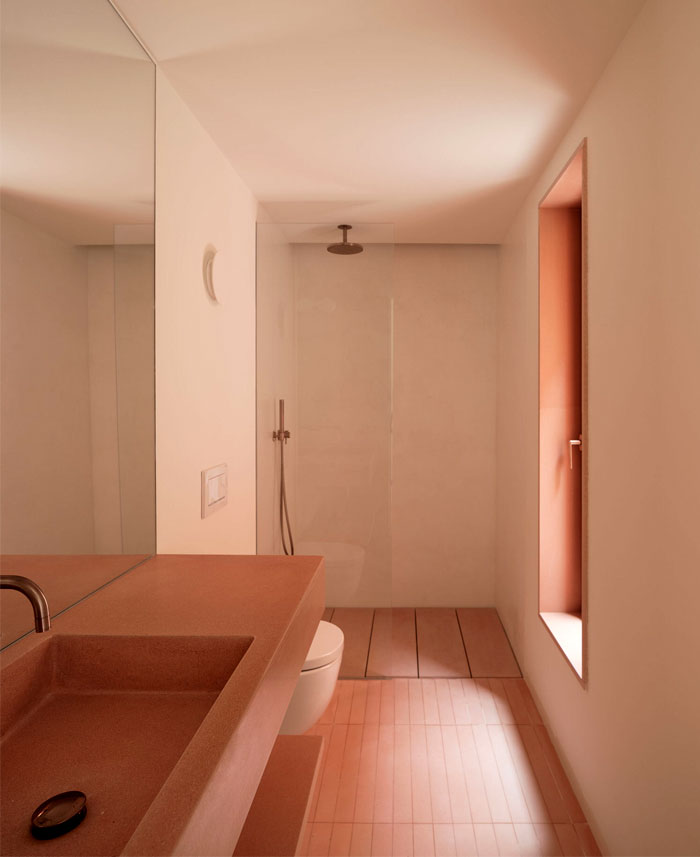 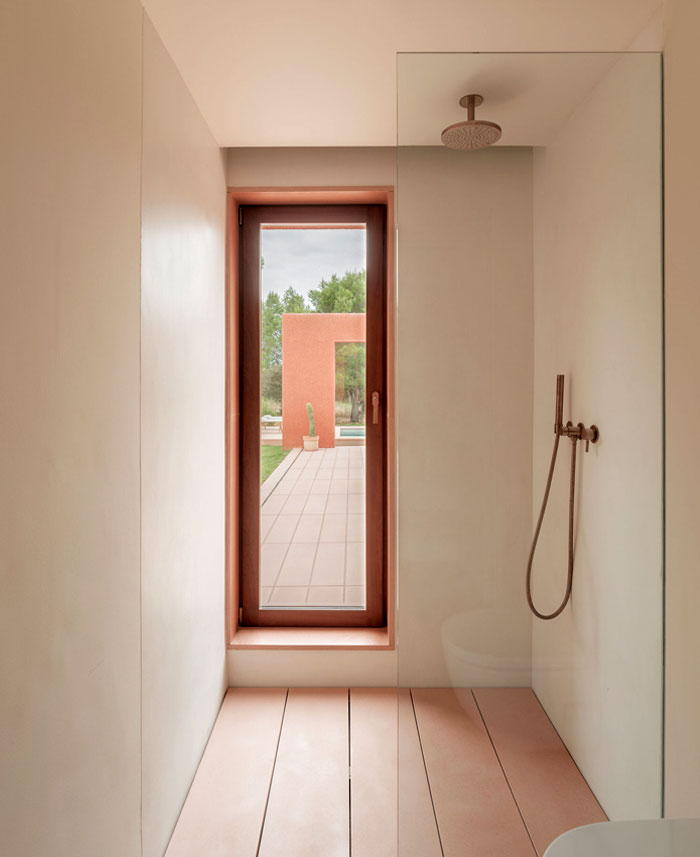 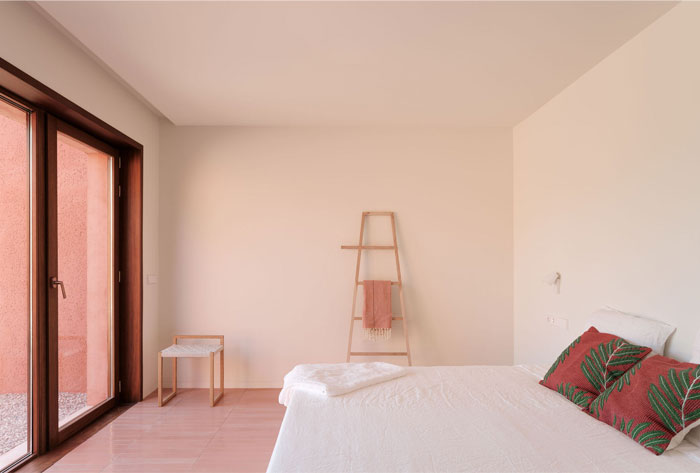 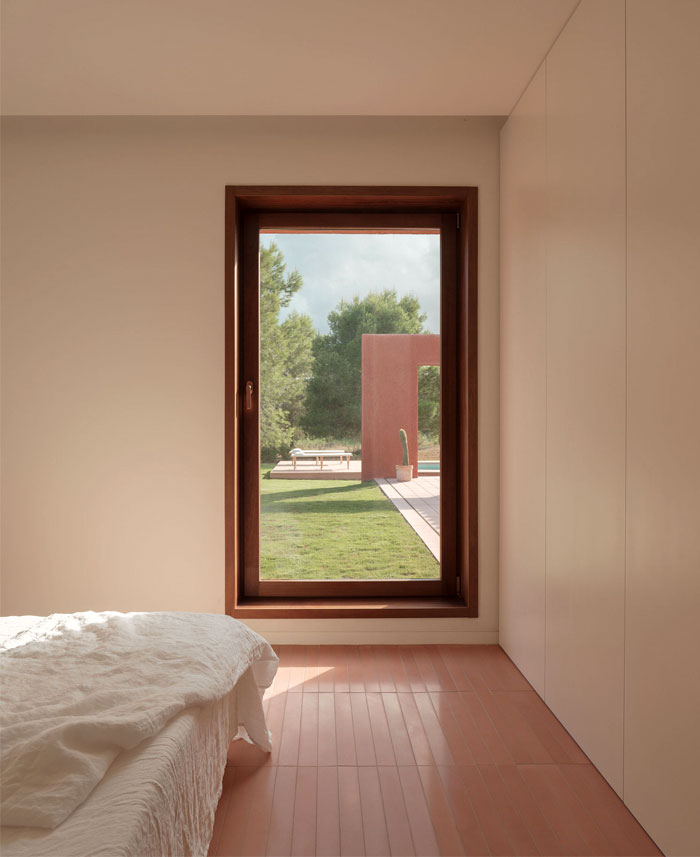 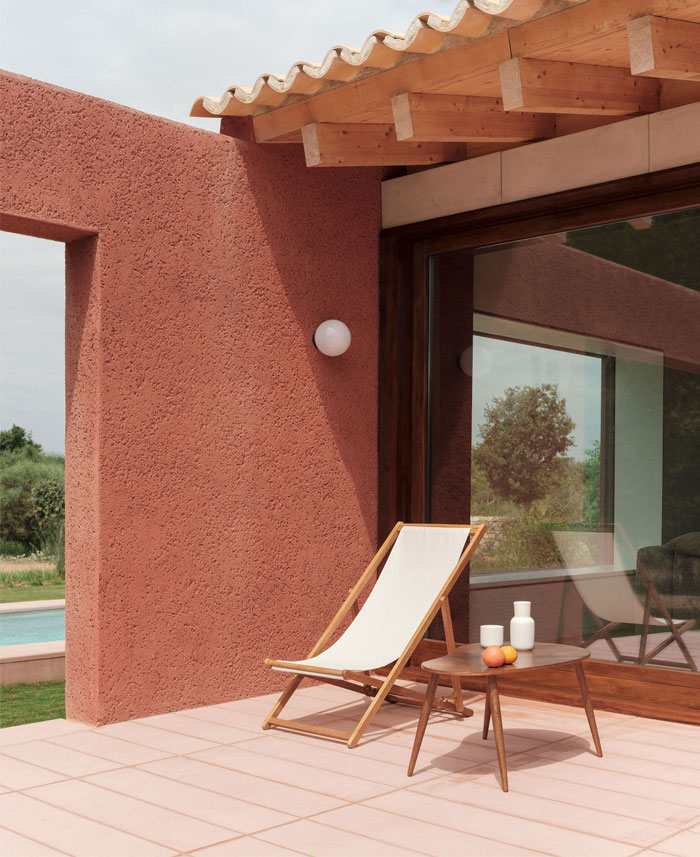 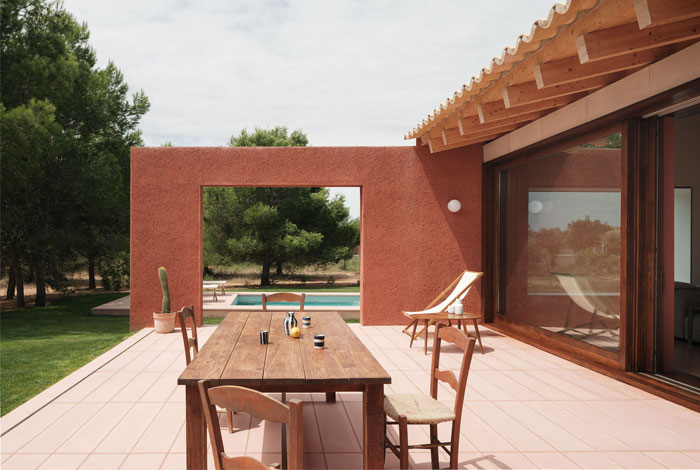 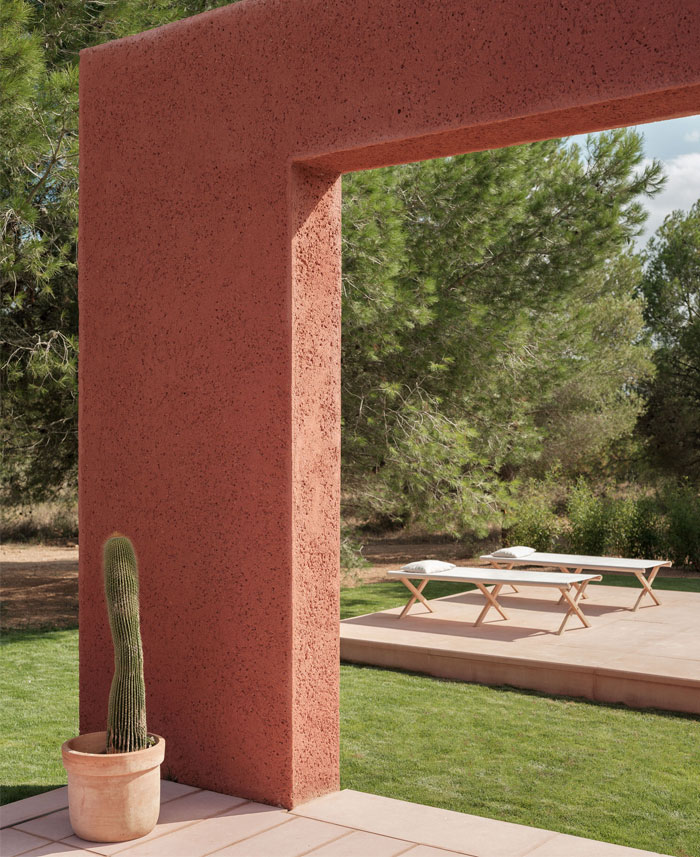 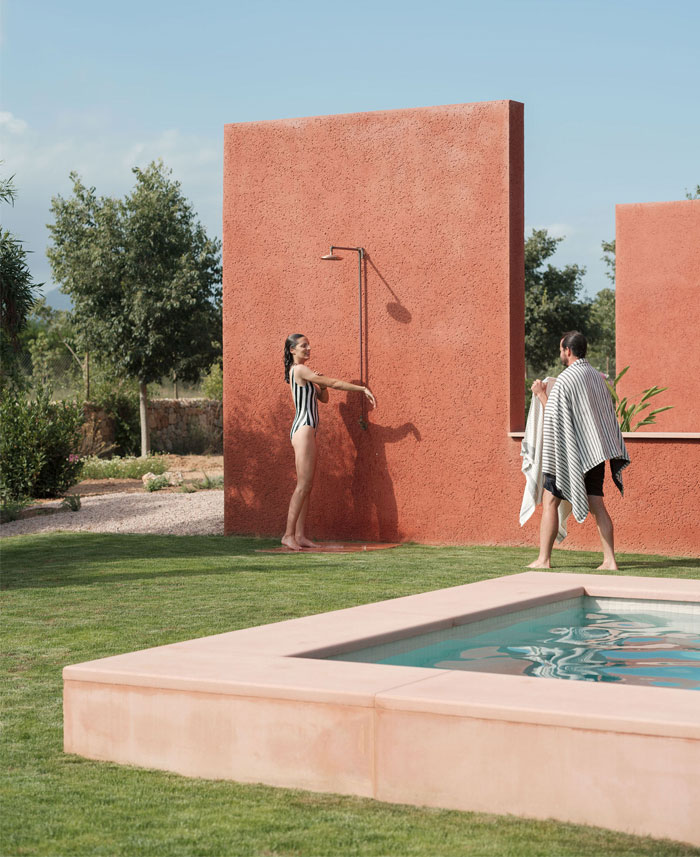 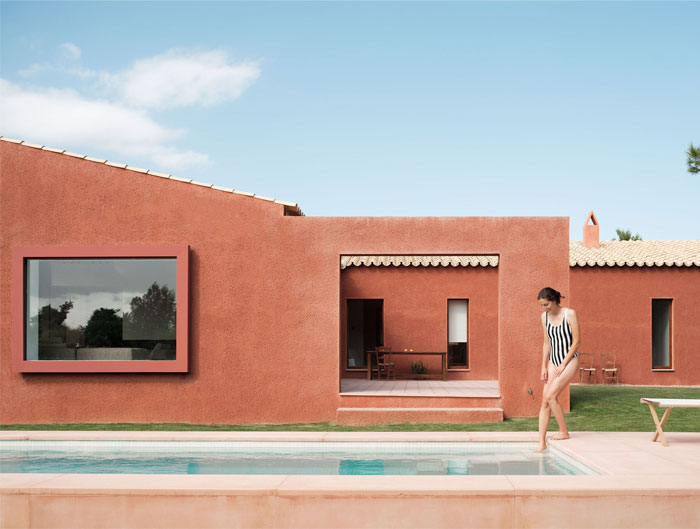