What used to be two separate spaces used for a Jiu Jitsu gym and a beauty salon has now become home to the first Spacial office space. Located on the second floor of an 8000 square foot building on Wellington Street, this new coworking space is directly connected to the busiest part of the Verdun neighborhood of Montreal, Canada. 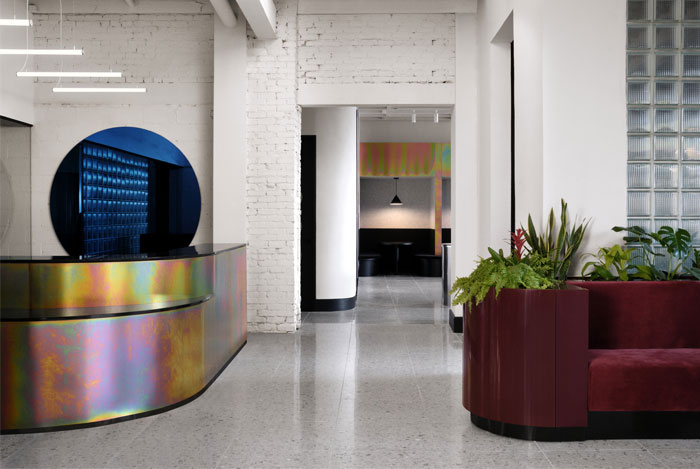 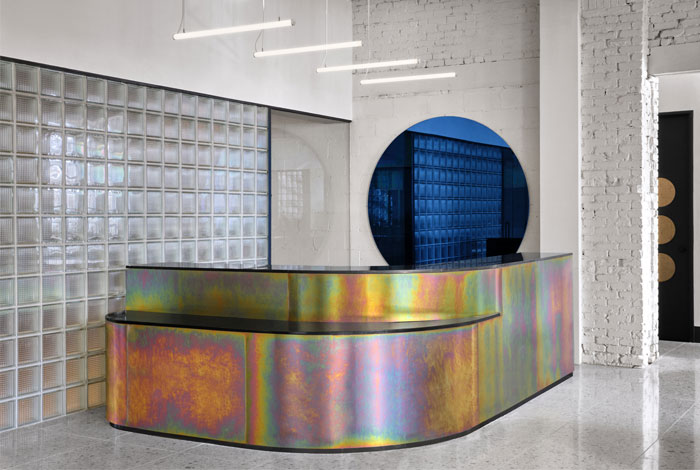 The brief was to make a flexible working environment for a total of 120 people, with different sizes of rentable offices and a variety of shared common areas. Being the first of its brand, this space had to stand out from its competitors by offering a unique vision for coworking. 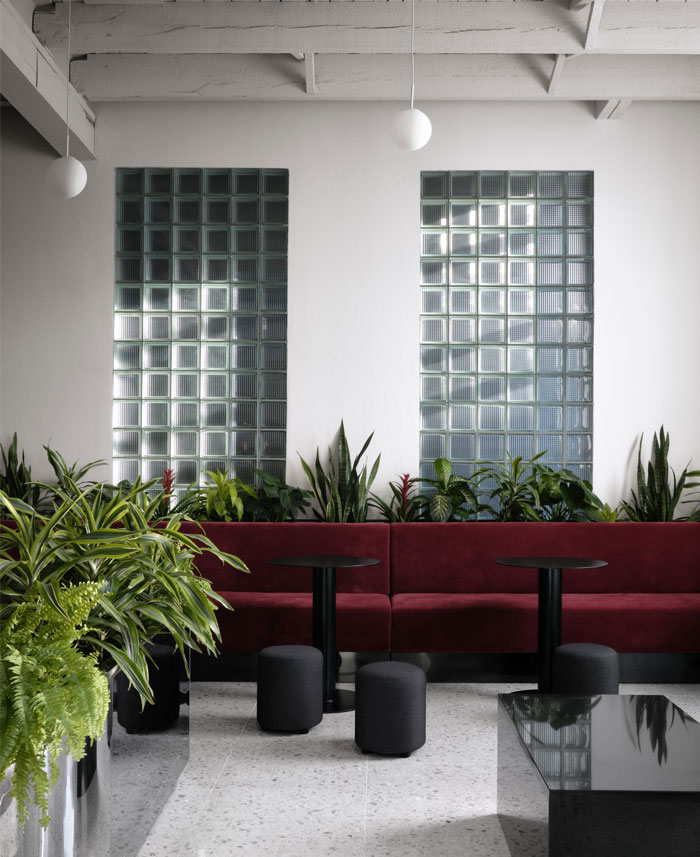 Despite its large footprint, the existing space had very little access to natural light. Only the front façade and the main staircase have windows, making it a challenge to create a pleasant working environment. By adding new glass brick openings in the staircase wall, it made the two front sections perfect for the shared common spaces. The first one welcomes you with the reception desk and is accompanied by the working lounge with three conference rooms, a banquette and a series of lower sofas. Separated by the existing centre brick wall, the second space consists of the kitchen, dining area and private booths ideal for smaller groups. Both of these spaces are designed to offer a variety of options for informal working or meetings.

Behind the reception desk, a glass brick wall separates the open public spaces from the private rentable offices. Given its distance from the glazed front façade, it was fundamental to brighten the back section with more than artificial lighting fixtures. To achieve this, the offices were condensed into a single core placed at the center of the space. A total of 20 skylights were added in the surrounding corridors, letting in as much sunlight as possible. 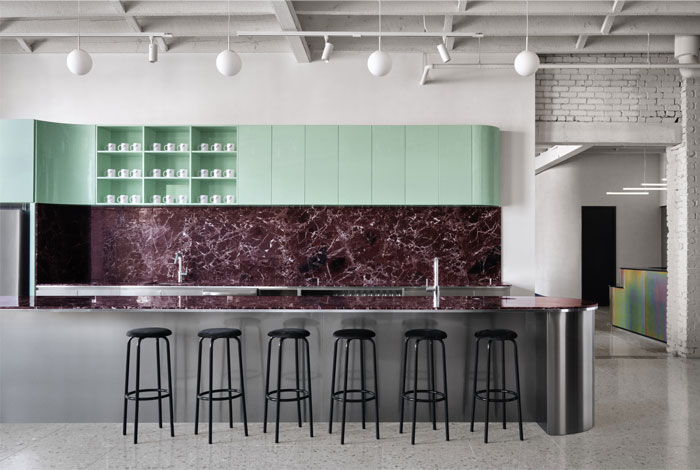 The closed offices are composed of fixed and sliding glass panels. The entire volume is colored an unconventional dark burgundy, including the mullions and carpeting. With the exposed brick walls, sandstone floor tiles and abundance of natural light pouring into the hallways, the general feeling resembles that of working in an exterior courtyard. 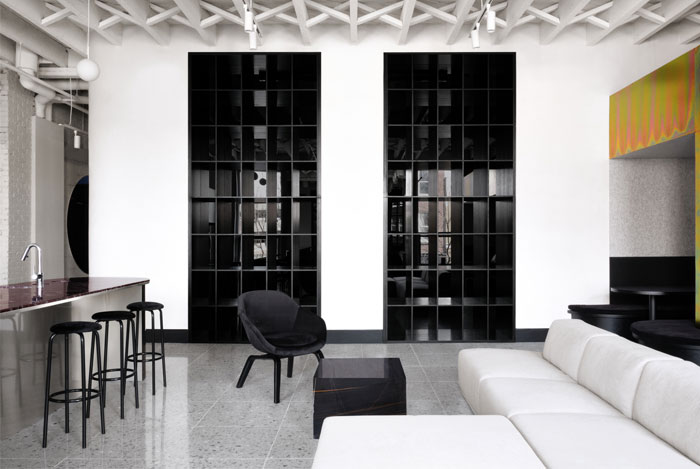 The existing building structure is celebrated in the front sections as well. The old ceiling joists, exposed brick and newly built walls are all coated with an off-white lime plaster to create a textured blank canvas for the functions held inside. At the entrance, the reception counter takes center-stage with its colorful zinc-plated materiality. On both sides, each of the two open spaces showcase a large golden monolith covered with the same zinc steel sheets: one for the conference rooms and the other for the booths. Below the glass block openings sits a long burgundy velvet banquette with its full length integrated planter. On the opposite side, the kitchen adds a similar color splash with its Rosso Levanto marble and mint green curved cabinetry. 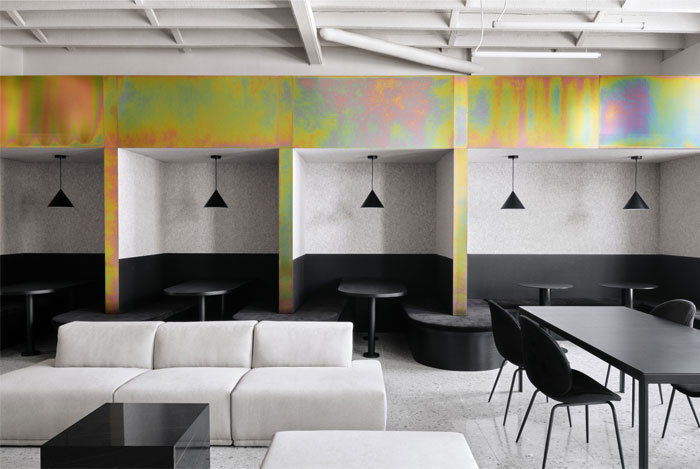 The rounded stainless steel island mimics the custom-designed chrome planters dispersed throughout the space. Between the kitchen and the office area are hidden a series of phone booths as well as the individual washrooms. The whole sanitary block is treated as a single unit with black 2×2 ceramic tiles and matching plumbing fixtures. All additional furniture in the space is black, contrasting with the light grey terrazzo marble flooring. In the conference rooms, televisions are camouflaged in front of matching circular black mirrors, each backlit to put forward the white-washed brick wall. Two similar baby blue mirrors are installed back to back on the dividing brick wall, creating main focal points visible from all around. 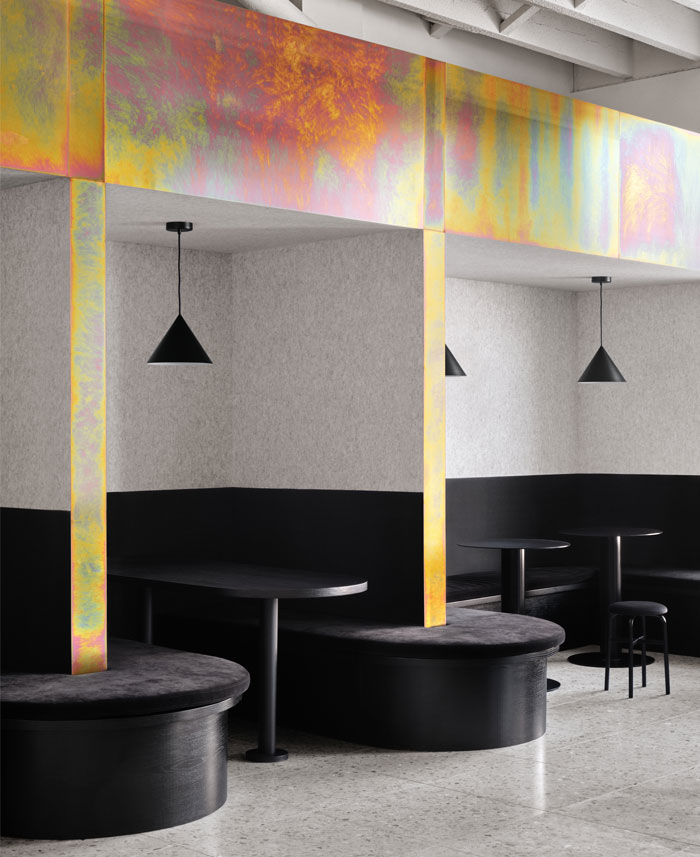 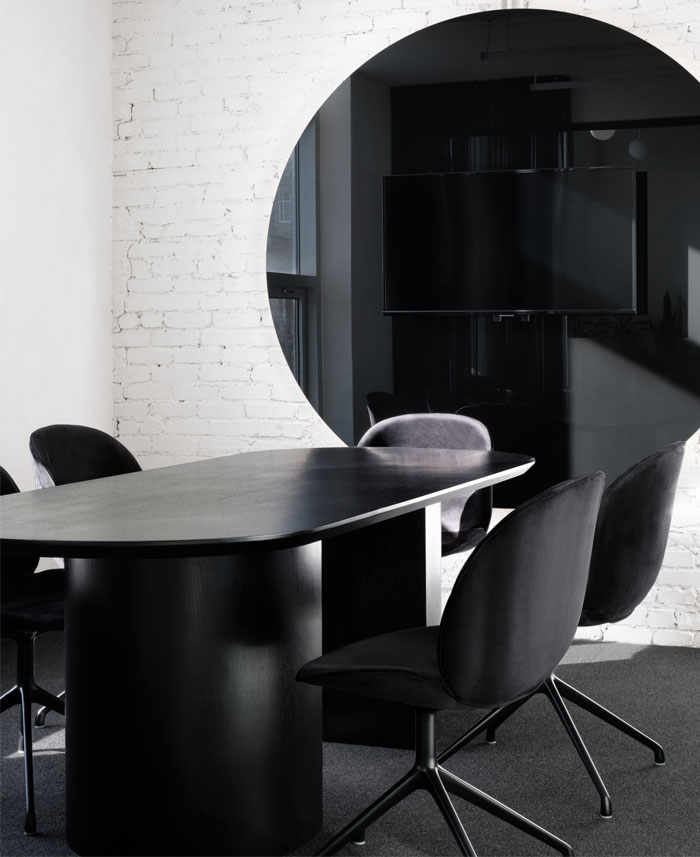 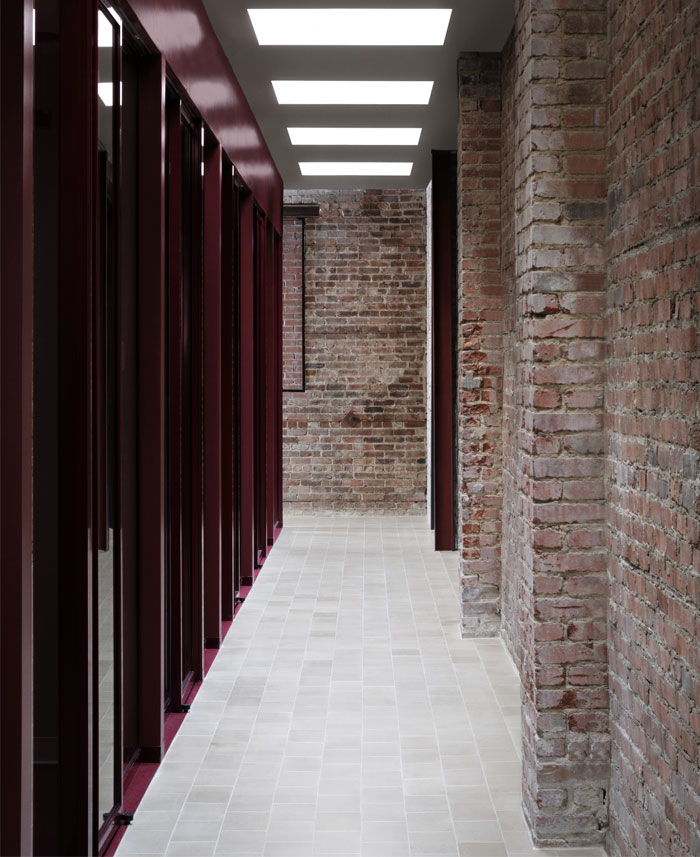 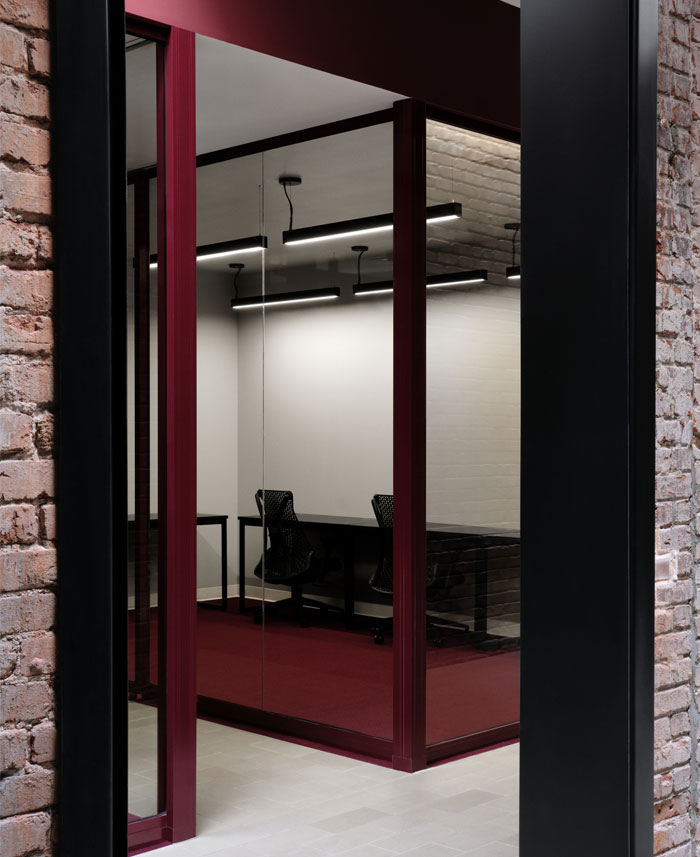 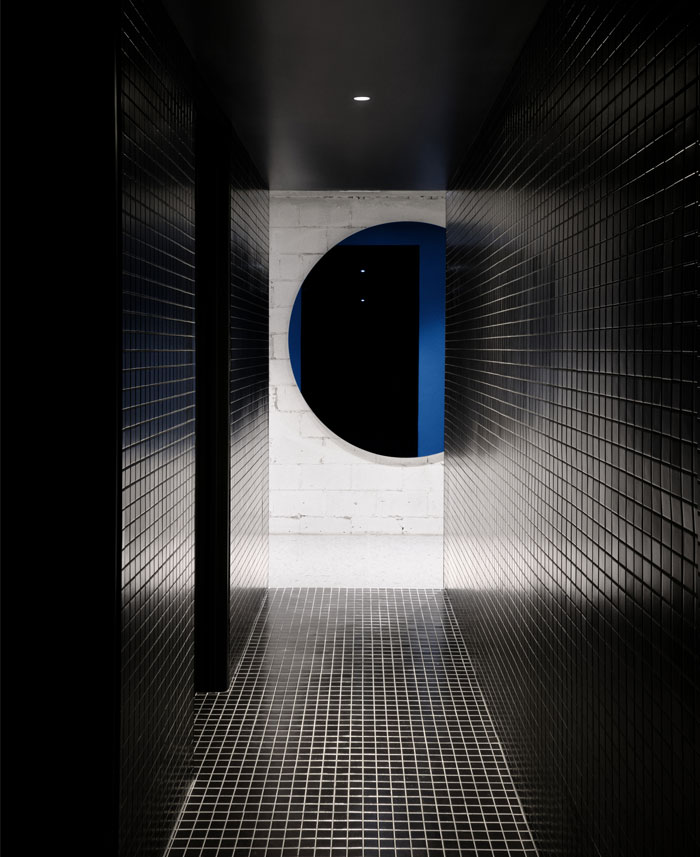 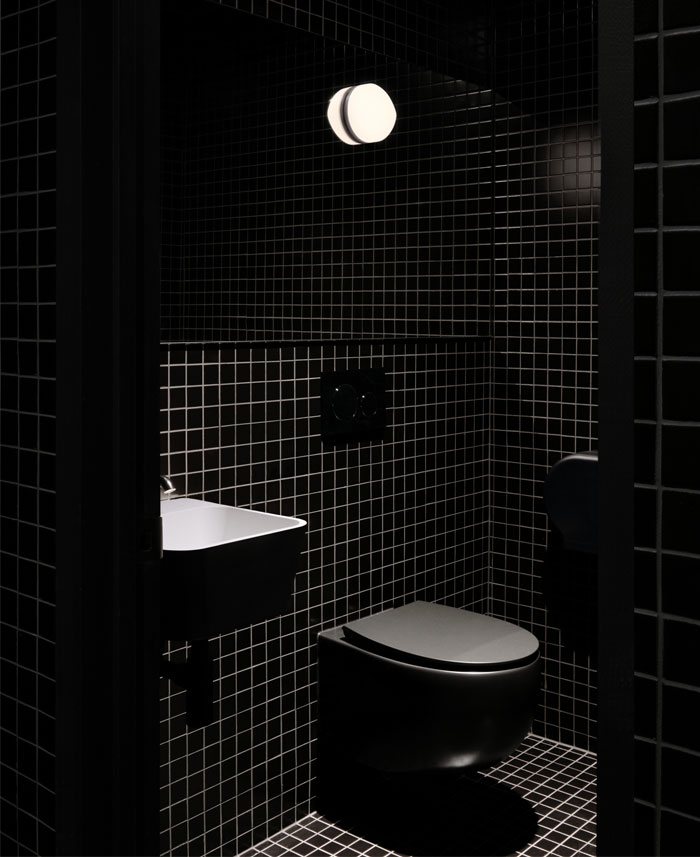