An Oasis in the Heart of Poblenou – the once industrial district of Poblenou in Barcelona, Spain has been rejuvenated in recent years. Chimneys which once pumped out smoke have halted, and factories lie quiet: converted into modern bars and start-ups. Poblenou has maintained its grungy, industrial feel – but refashioned itself into something fresh and contemporary. 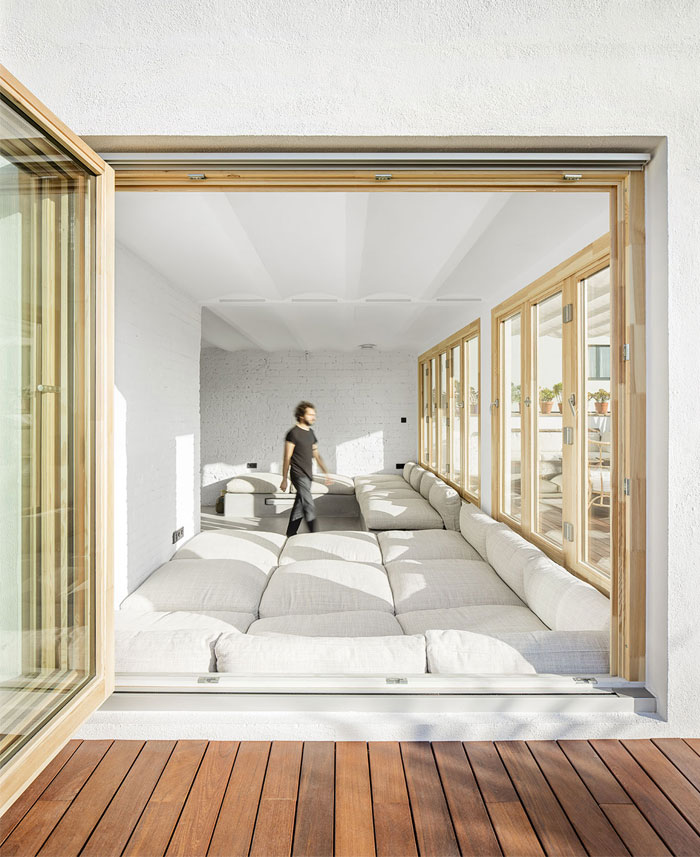 DOD Building has captured this character in their most recent project: a top-floor apartment in the heart of this innovative district. Working with m-i-r-a architects, they have created a space which feels as connected to the city as it does to the sky and the natural world. Whilst the use of materials such as concrete, iron, and brick give a nod to the area’s industrial past, the architects combine the man-made with the outdoors; elements of nature, woven into the property, give the sensation of a tranquil oasis above the bustling city. 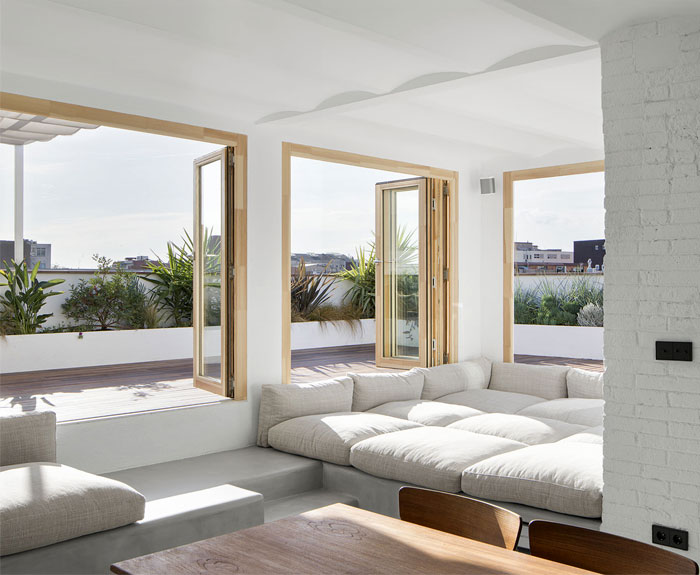 Visitors are met by calm, neutral tones. The clean-finished, concrete flooring runs seamlessly through the property, meeting the large window frames, made of light wood, harmoniously bridging the transition to the outdoors. Warmth enters the space via the sunlight cascading in from expansive windows, blending inside with outside, urban with nature. The architects invited the sky into this top-floor loft, by introducing skylights in meaningful places: where there is water, there is sky. Above the sink in the kitchen, the bath, and the shower, light shines in. It reflects off the water, reminiscent of naturally lit waterfalls, lakes, and streams. 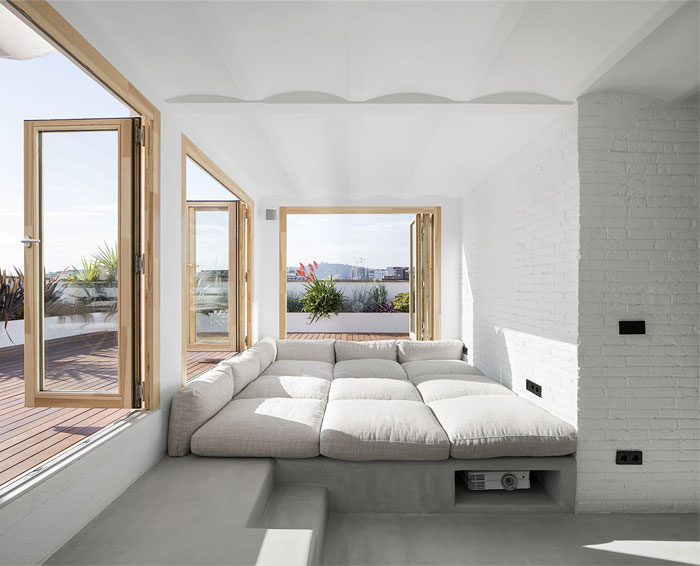 There exists a clear flow, with no jarring shifts in the energy between rooms: one conscientiously calm space which gently changes from outside, to bedroom, flowing to kitchen, melting into living room, and transforming back into outside. A wooden terrace area, which runs around the property, can be accessed by vast window-doors at either end of the apartment, giving the impression of a balanced circle – a space which is as much outdoors as in. Wooden planters line the terrace and conceal the surrounding rooftops, creating a secluded retreat from densely populated urban life. 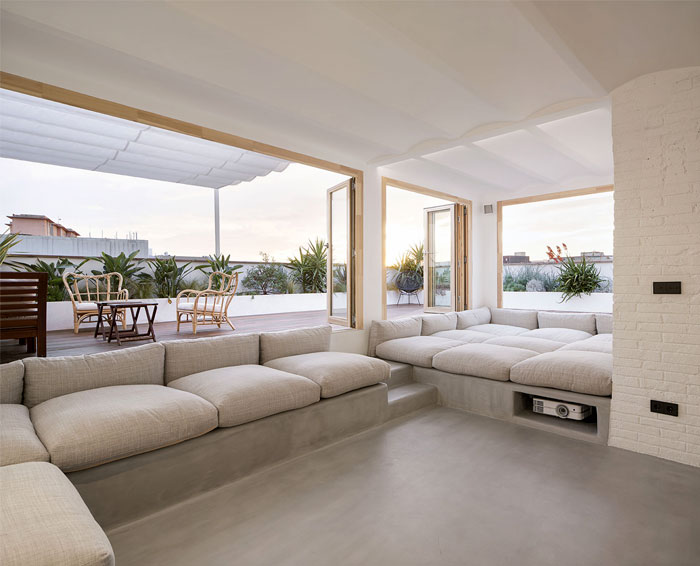 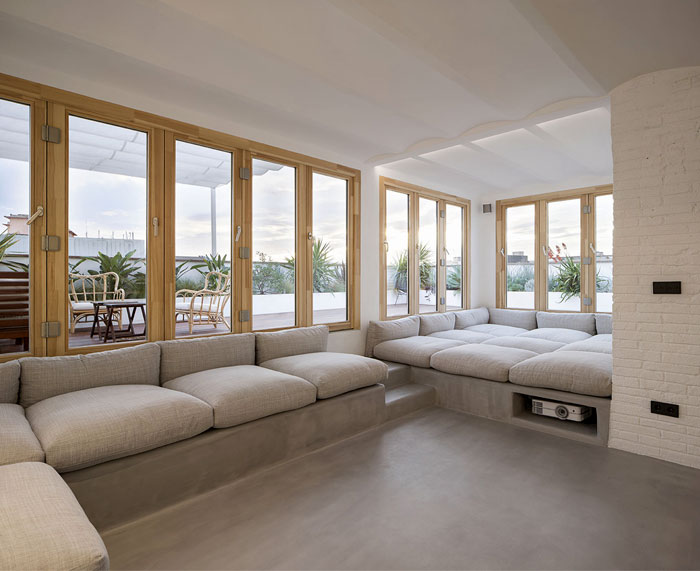 Textured natural materials: cotton, wicker, and wood, compliment the smooth finish of the floor and walls, whilst the abstract shapes of the plants on the terrace make them a feature throughout the property. Visible from most areas, the green vegetation pulls the spectator into nature. Original features have been maintained and updated, incorporating and preserving aspects of the traditional Catalan architecture, resulting in a build that feels like an organic part of Barcelona and its heritage. The traditional, undulating, vaulted ceiling creates an engaging statement, whilst the original brickwork has been left partially exposed; this adds texture, whilst reaffirming the connection between the apartment and its historically industrial setting. 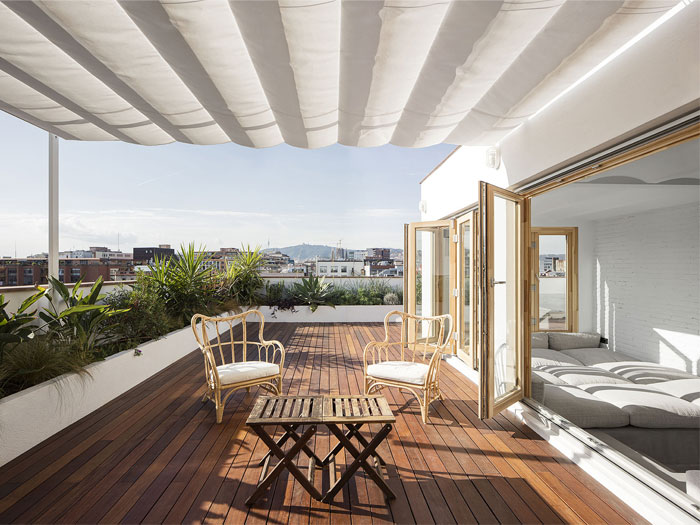 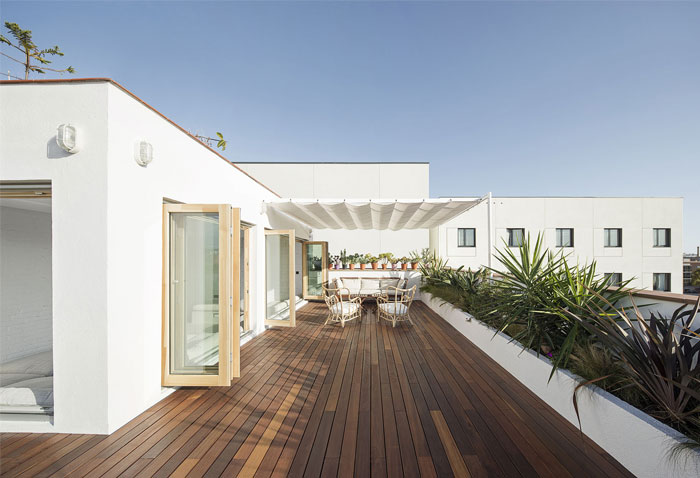 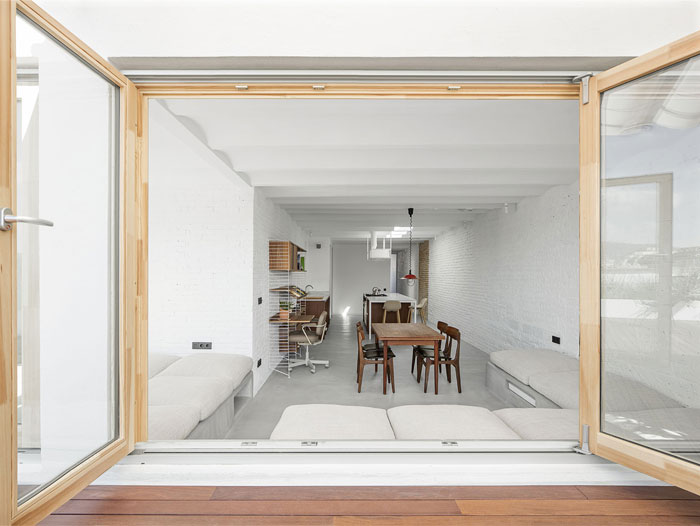 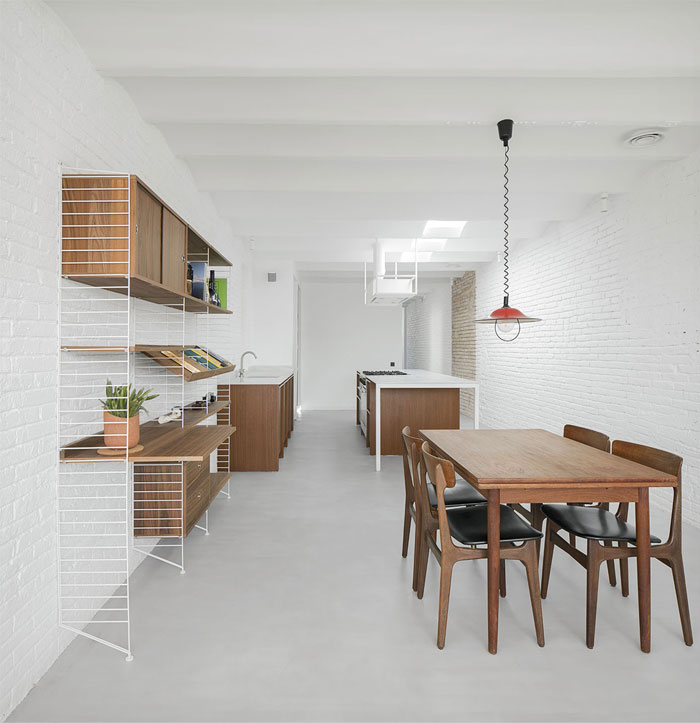 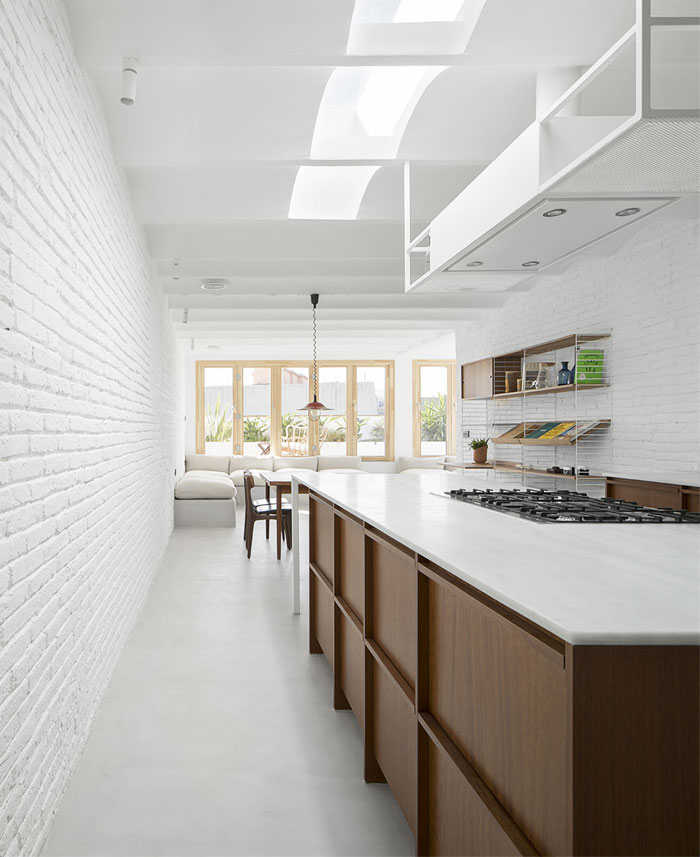 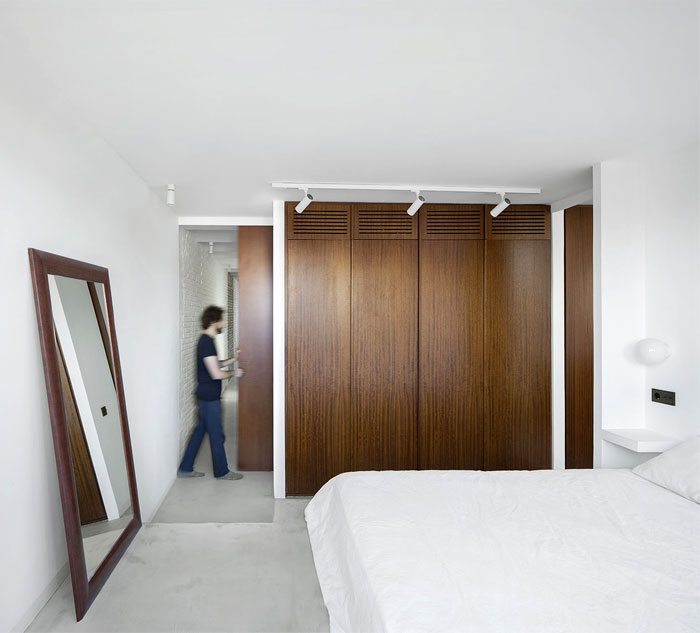 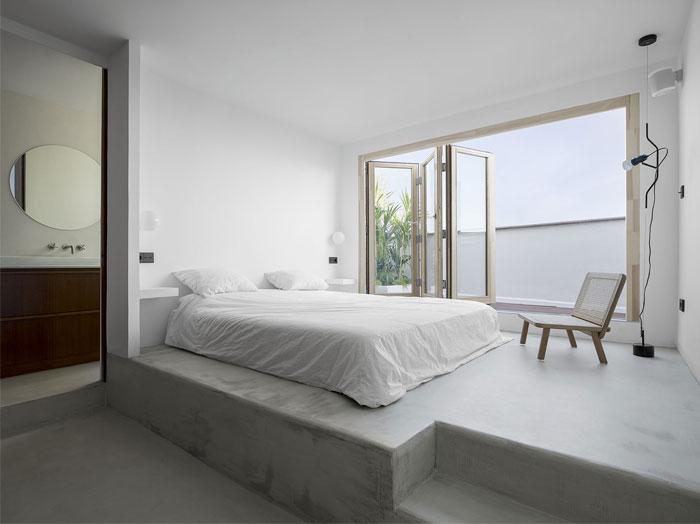 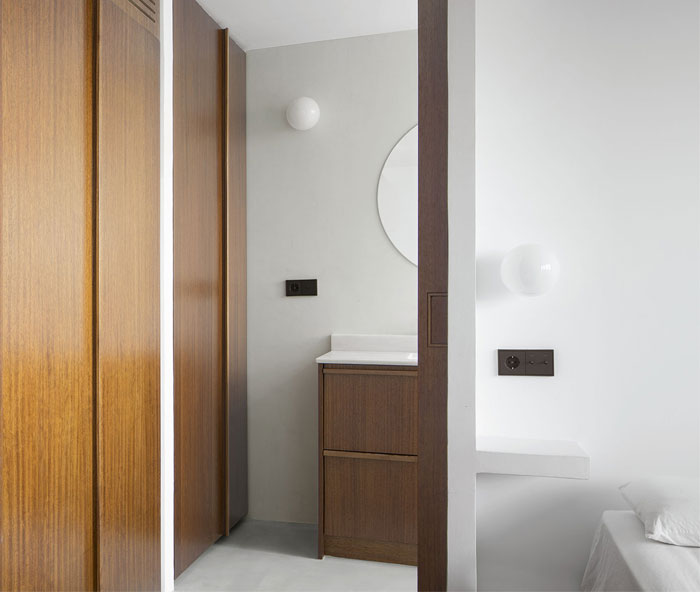 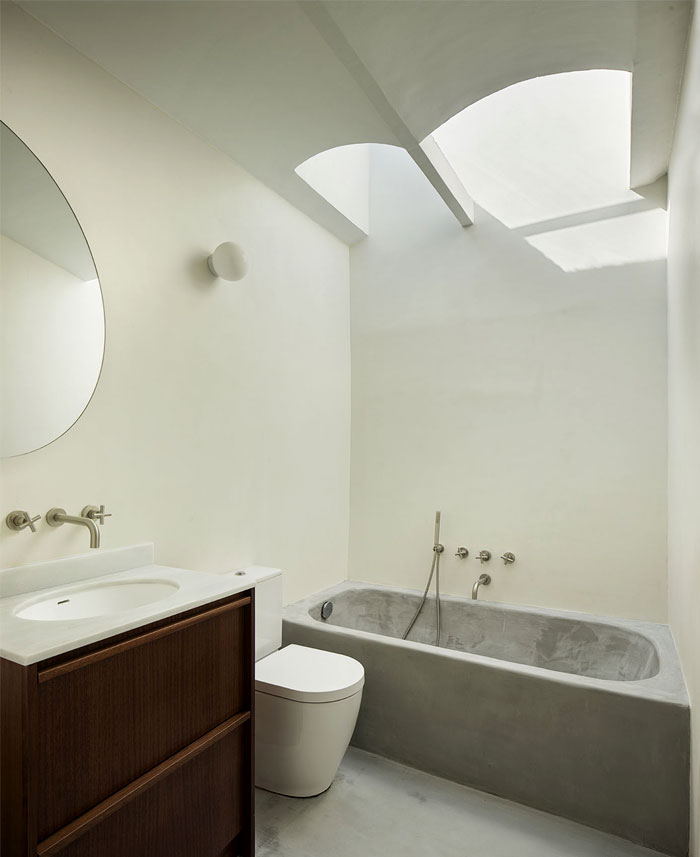