PRO Espresso bar opened just after the lockdown, at the height of this summer. One of the characteristics that differentiates this cafe from the others is the use by the barista of compact Modbar machines instead of the classic ones. 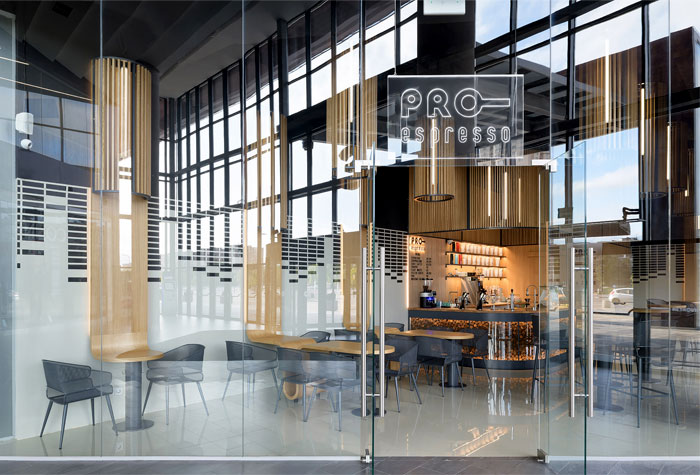 Modbar is visually a single piston and a compact press. The cost and quality of this equipment is comparable to that of Tesla relatively to the vehicles. Therefore, the owners of PRO Espresso bar asked the founders of YUDIN Design studio to pay all their attention in the interior to the progressive devices and the skills of the barista, who is finally not hidden behind the machine but produces masterpieces based on espresso right in front of the visitor’s eyes! 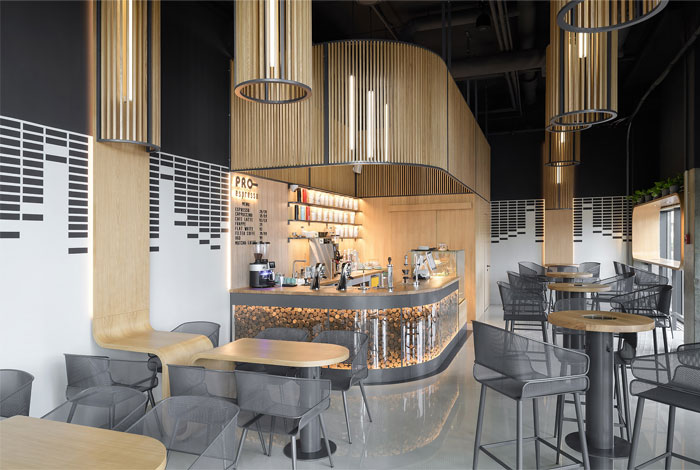 Even at the dawn of the concept development, the founders decided to entrust the interior and brand identity of the bar to the famous Ukrainian designers and owners of the studio YUDIN Design. Vladimir and Aleksandr Yudin have been specializing in working for HoReCa for about 20 years and are able to create brand symbols that also reveal the essence of the locations.
According to their plan, the interior of PRO Espresso bar has no partitions or massive structures, but the entire space is organized in such a way that, right from the entrance, guest’s attention is drawn to the bar!
The design of the bar counter resembles the letter U and is a glass showcase under which the designers have laid 1300 tablets of coffee pomace! 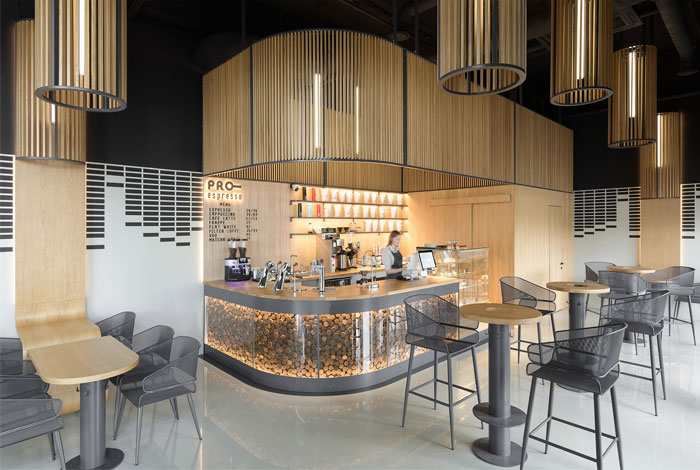 The emphasis on professionalism can be easily traced in the naming proposed by Aleksandr and Vladimir Yudin; “PRO” indicates that this is a brand for true connoisseurs of coffee and makes it clear the concept of the location: everything is about coffee here! “We designed a real hard-brewed coffee logo! The letter “O”, in the form of a regular circle connected with a dash, resembles a holder’s lever, which is an extension of the barista’s hand. This is one of the most important skill gadgets and an instrument with which the barista is constantly in contact”, Vladimir Yudin explains. 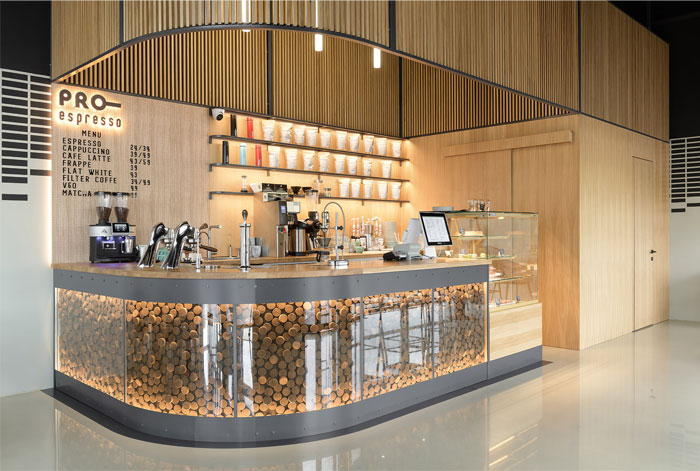 The continuation of the identity in the interior is realized with the help of a dynamic print on the walls – a symbol of the pace at which the team of PRO Espresso works. To show the progressiveness of this coffee bar in the interior, the founders of YUDIN Design used a calm color scheme, sleek and streamlined shapes, while panoramic windows evoke a feeling of confidence, stability and comfort. In general terms, the style of the interior can be delineated as Scandinavian futurism. 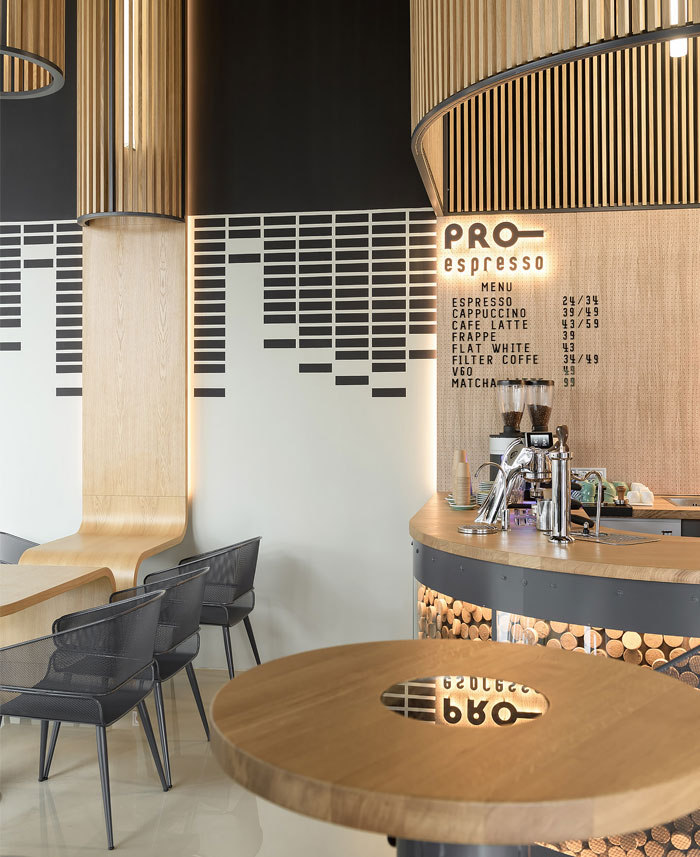 Especially for cosmopolitan bar visitors, the designers have developed original tables with a recess for bags in the shape of a letter U. “Some difficulty arose with the implementation of our idea to smoothly bend the shapes of oak tables and woodworkers”, Aleksandr Yudin claims. “Many were simply afraid to take on the promise of producing these tables on time but we did it: each table consists of several parts which is the secret of manufacturing. At the same time, externally, the product looks like a one-piece bent shape – as we intended ”.
The other tables, for one person, are interesting for their cores in the center of the countertops, where real coffee beans are poured. 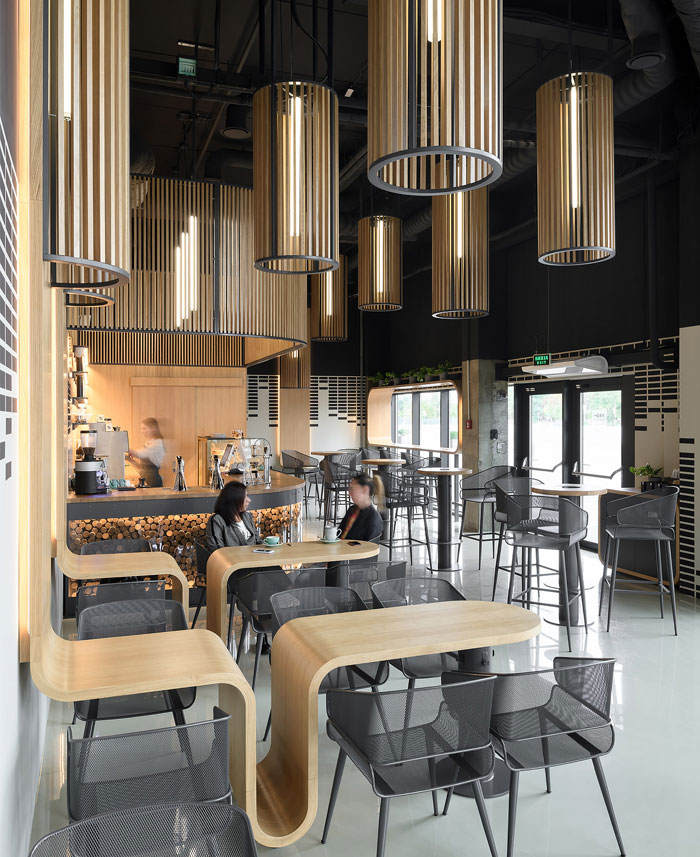 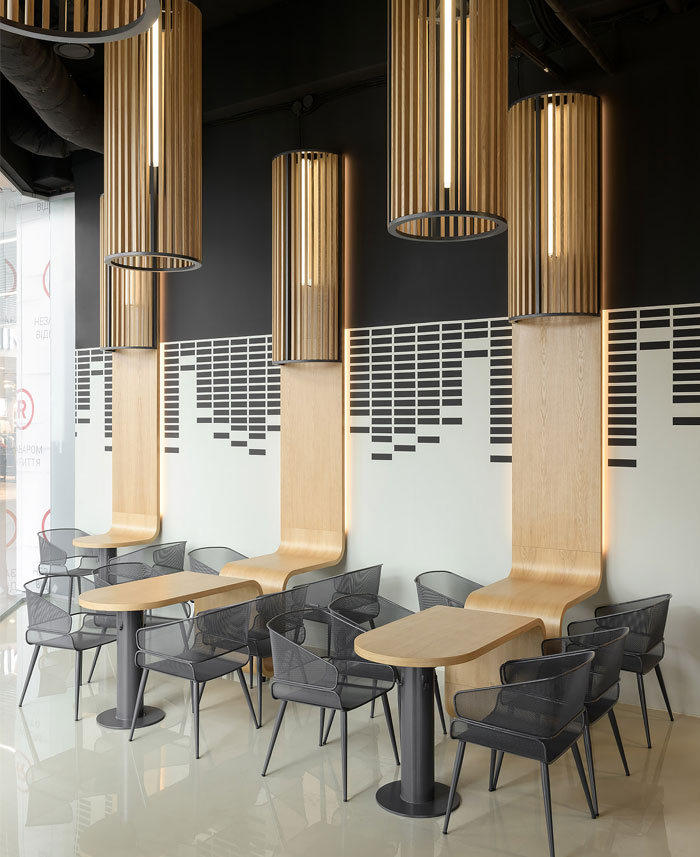 Wireless chargers are built into almost every piece of furniture. For the implementation of the project, natural oak, glass, metal, and concrete were used to demonstrate the brand’s position – naturalness, only eco! Even the designer lamps realized by the Brothers Yudin are made of planks! Chairs for the interior were ordered by the designers from the Turkish fabric Sandalyeci. 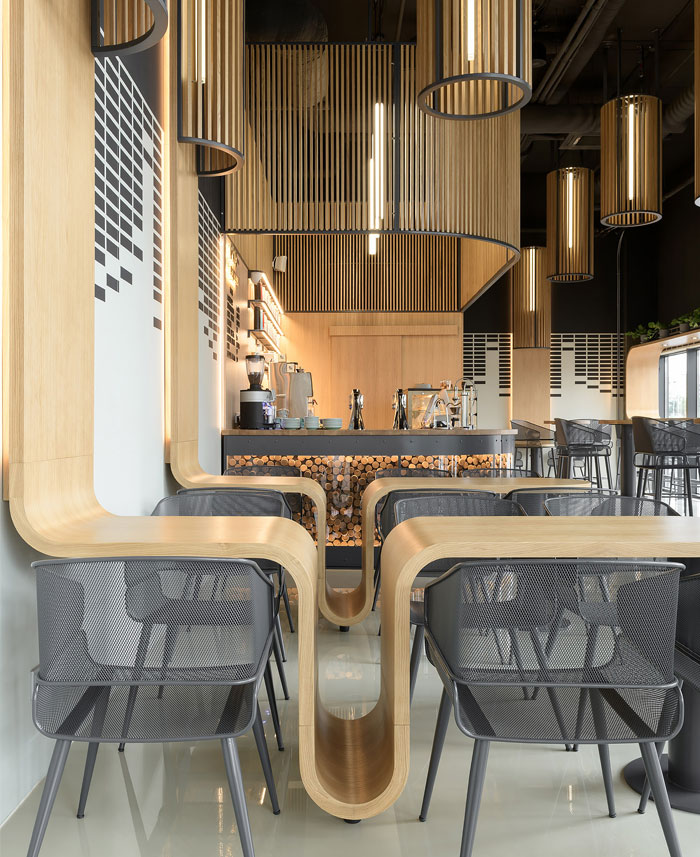 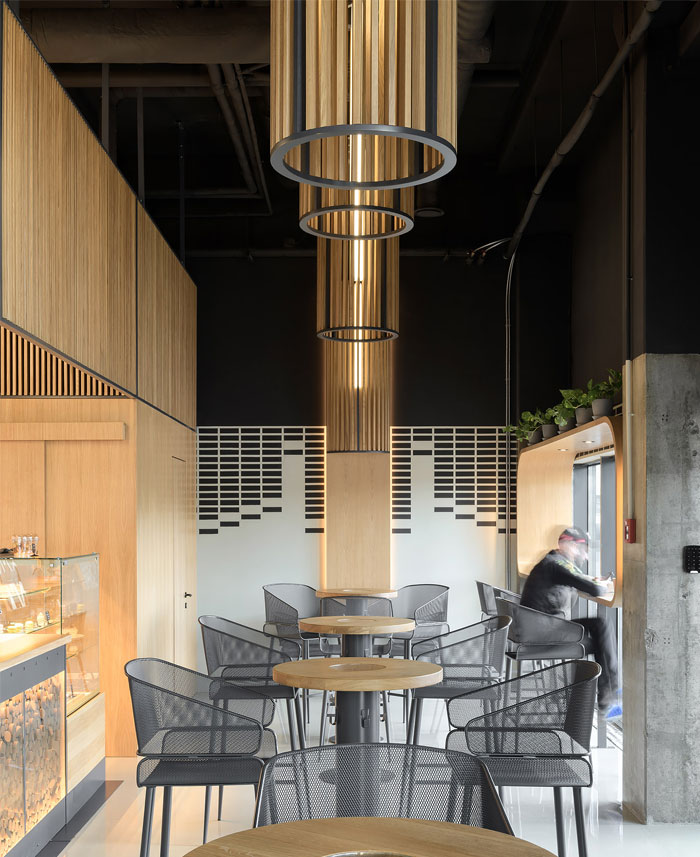 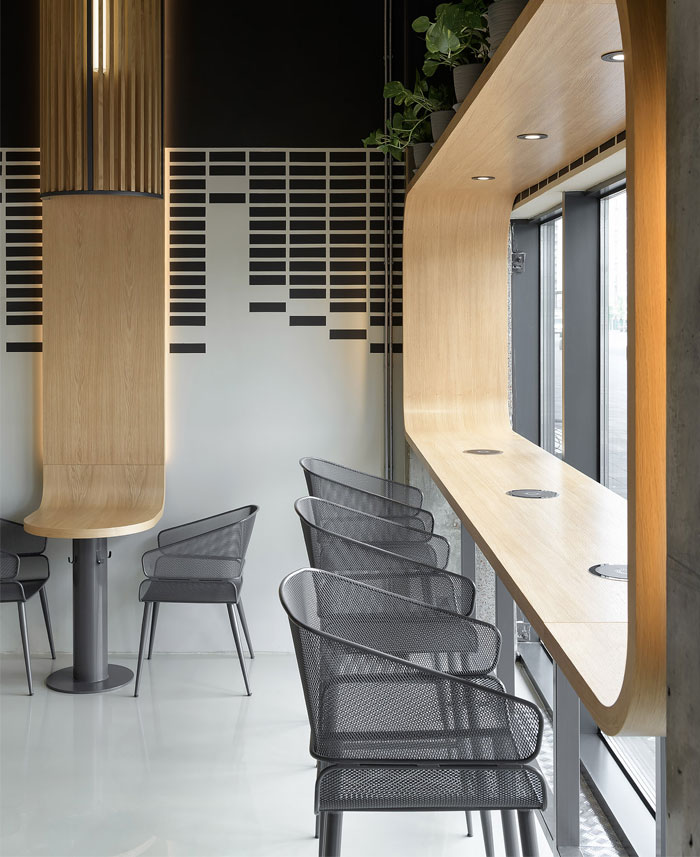 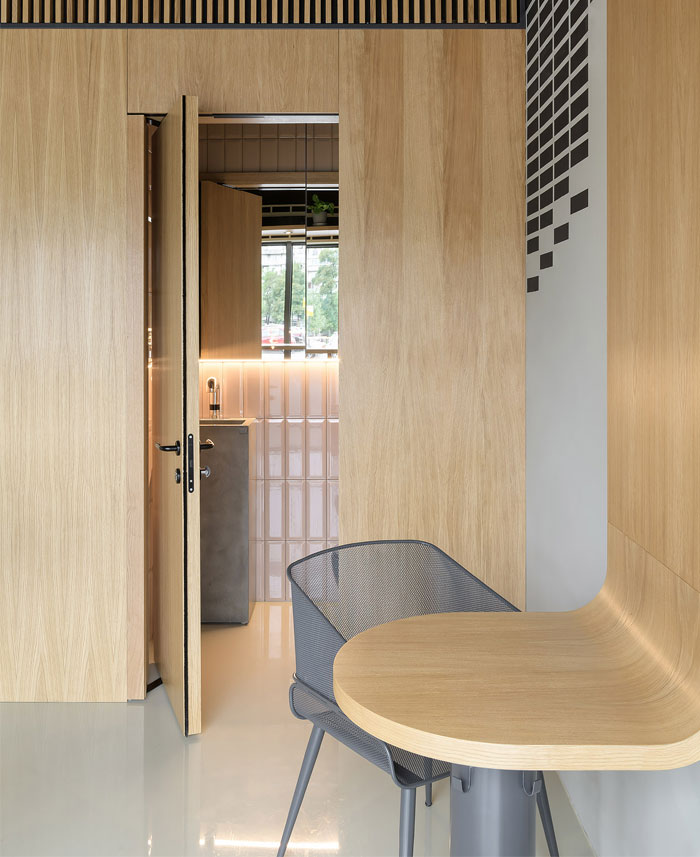 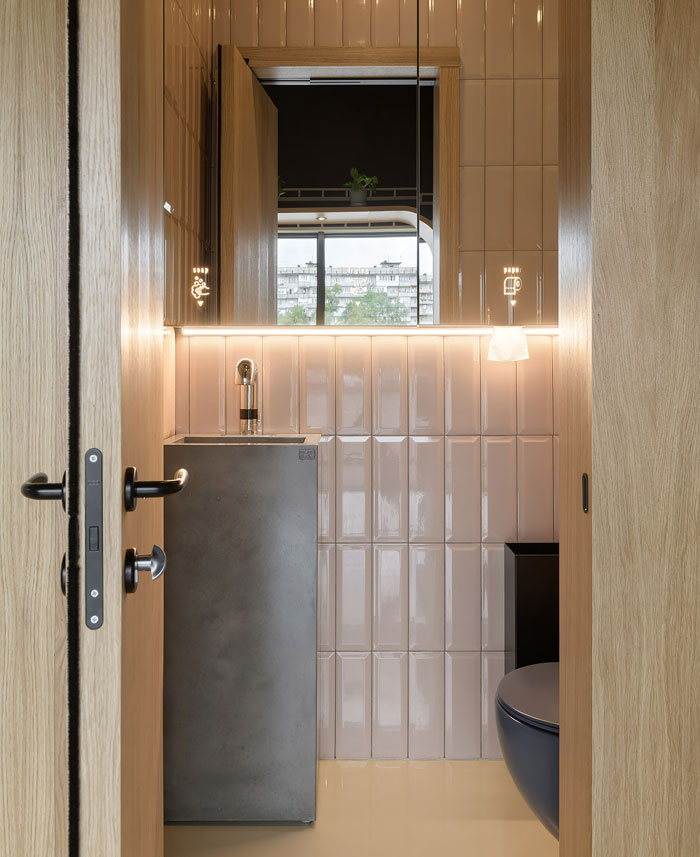