Known as China’s “Silicon Valley”, Zhangjiang High-tech Park in Pudong, Shanghai integrates a wide spectrum of key cutting-edge industries such as biomedicine, integrated circuit and aerospace, and delivers knowledge about nature and society. Situated within the high-tech park, ATLATL Innovation Cluster is a R&D platform for life sciences. “Atlatl” is a Nahuatl word that means “spear thrower”, which was invented by ancient hunters to maximize their hunting abilities. The word here implies the ancient traces of human innovation. 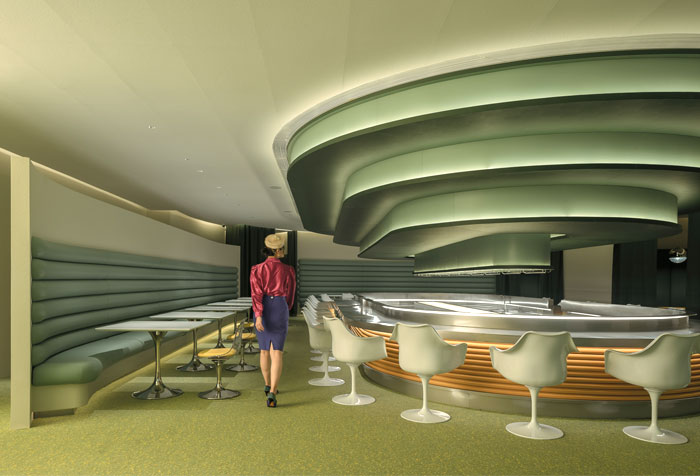 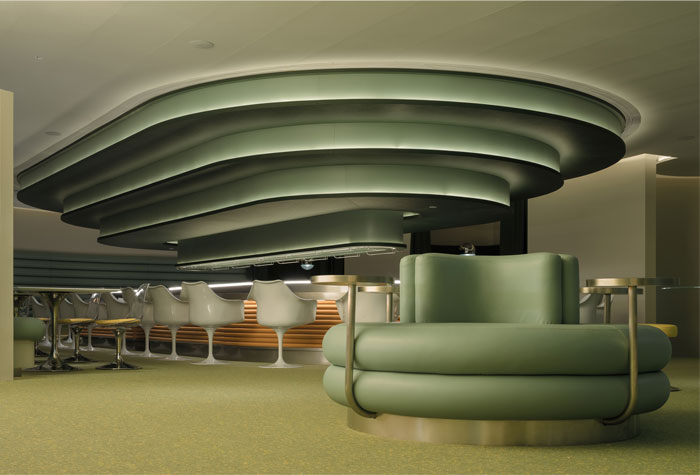 Various Associates was entrusted to transform a disused space within the high-tech park into an ancillary facility for ATLATL. Occupying nearly 520 square meters, the space needs to bring in tasty coffee, food, wine and the collision with creativity and innovation, and aims to provide an intimate and artistic “body energy station” to high-level researchers. 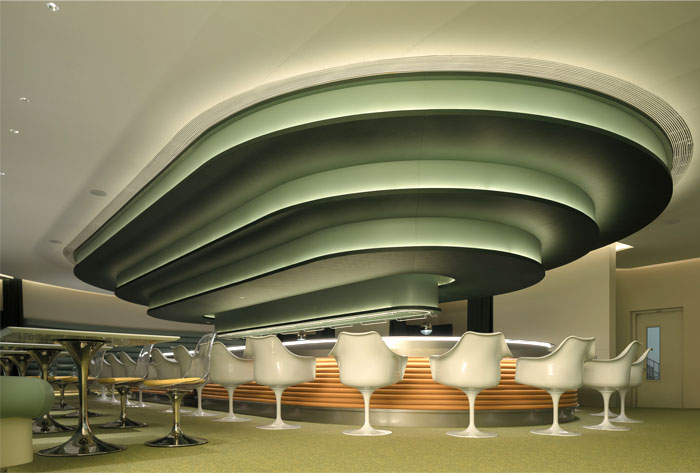 Considering special features of users and industries that the project serves, the client requested a futuristic spatial atmosphere. The definition of the notion about time is the key of the project: What’s future? What’s past? There are different understandings on “futuristic” at different times. In modern era, mankind’s imagination of future has always been connected to mega images, such as universe, celestial bodies, and the trace of time. 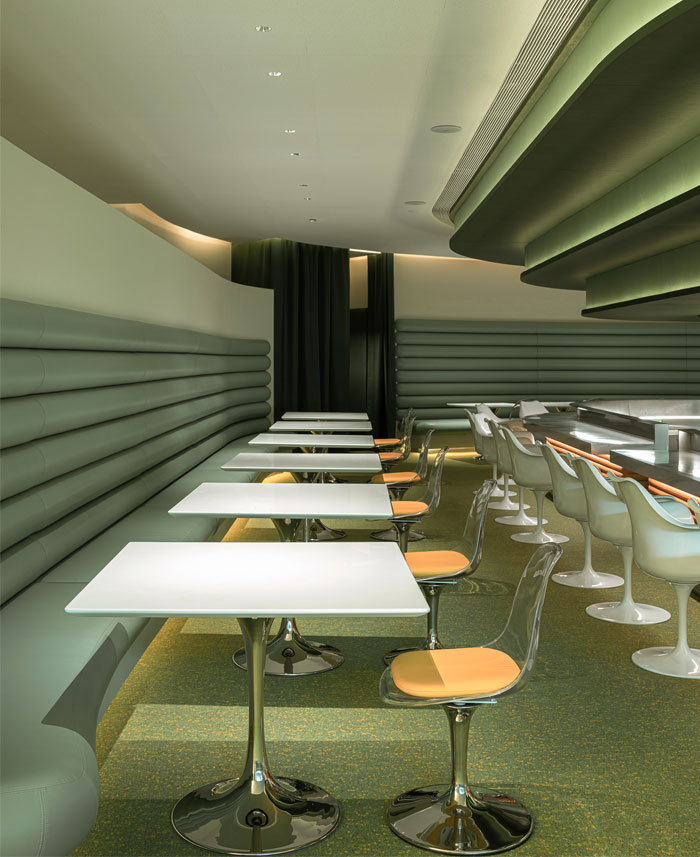 Currently, our cognition has been unable to catch up with the rapid transformation and changes in this VUCA world. VUCA is an acronym that stands for volatility, uncertainty, complexity and ambiguity. 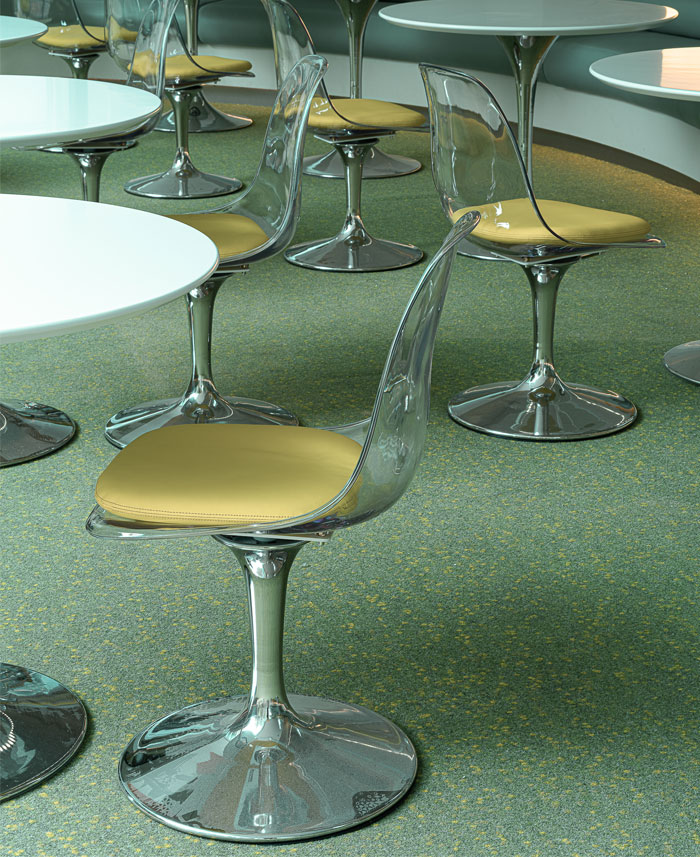 Comparing with past and present, “future” is a concept of time that will never come. Our imagination of technology and future in all aspects is composed of a series of scenes. As approaching the project, Various Associates utilized elements that are often associated with modern people’s imagination of future, including circles, curves, dome ceiling and traces, to create more intuitive “futuristic” scenes and ambience in the space. 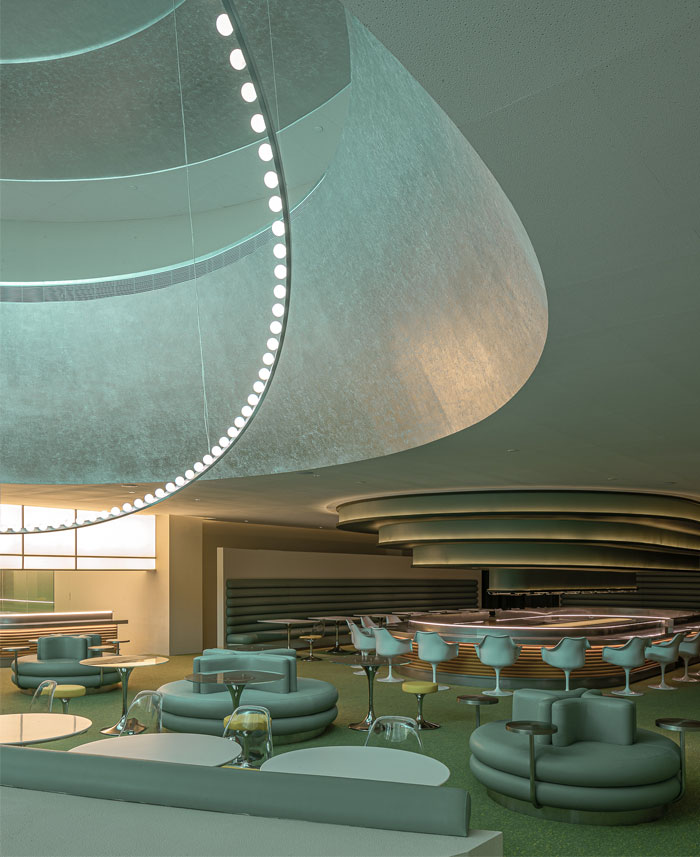 The storyline of the project is “Waiting Hall”. The design team took the notion of “time” to measure future, and convey the message of waiting for future from day to day. In everyday life, we wait for sunrise, sunset and routine activities such as work, dining and gathering, while waiting for “future” as well. 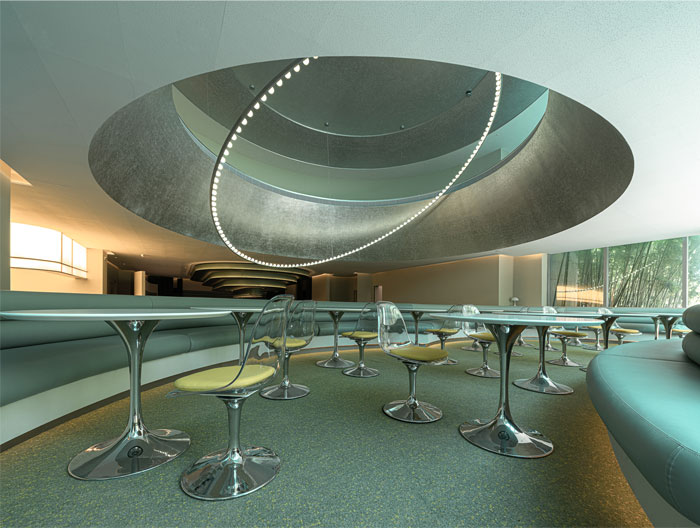 Various Associates tried to start from “summarizing the past”, and then deduced a futuristic spatial design experiment. As opposed to adopting a one-direction timeline, the design took “present” as the origin, which extends in two directions and connect past glories with the vision of future, thereby creating “retro-futuristic” scenes which cross time. 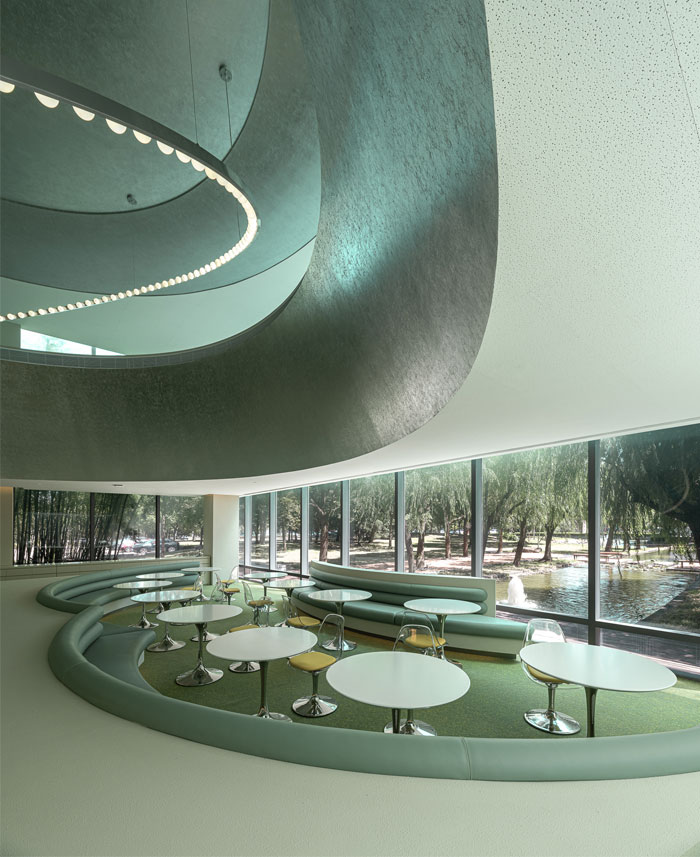 Geometric languages such as circle, curve and sphere are applied to interior structures, surfaces and furniture, echoing orbits of planets. By recreating mankind’s initial imagined view of the universe, Various Associates produced a streamlined space filled with a comfortable and futuristic ambience. 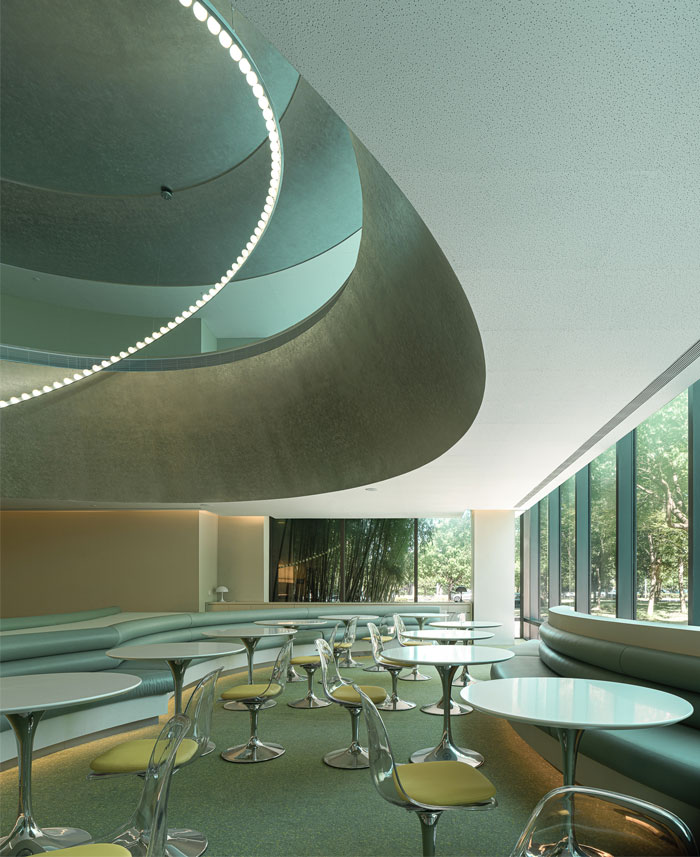 Design and fashion are an endless cycle. The project design drew inspiration from aesthetic achievements and technology explosion in the 20th century. Various Associates reinterpreted “futuristic” from a broader perspective, so as to conduct a spatial design experiment based on logic rather than sheer speculations. 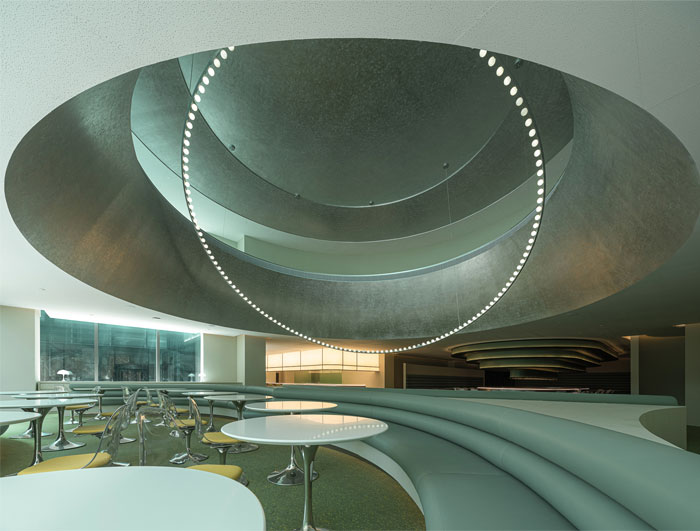 The space is dominated by a greyish green tone, which is a mixture of natural “green” hue and futuristic “grey” colour. Surfaces of different shades, malleable materials, film-like expressions and geometric compositions result in a tactile space. 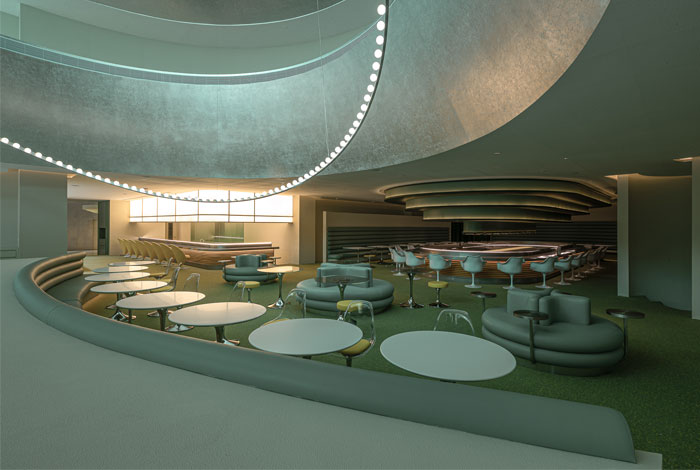 The ring “floating” in the atrium runs through the lower and upper areas. From the atrium to water bar, restaurant area, bar area as well as semi-open and private sections, the space is laid out based on different functions and degrees of privacy. With a smooth circulation, the entire space is able to accommodate 200 people for dining, relaxing and socializing. Various Associates incorporated the ideas of “waiting hall” and “countdown” into spatial scenes that rewind time, while also bringing in stories and creating spatial rhythms. 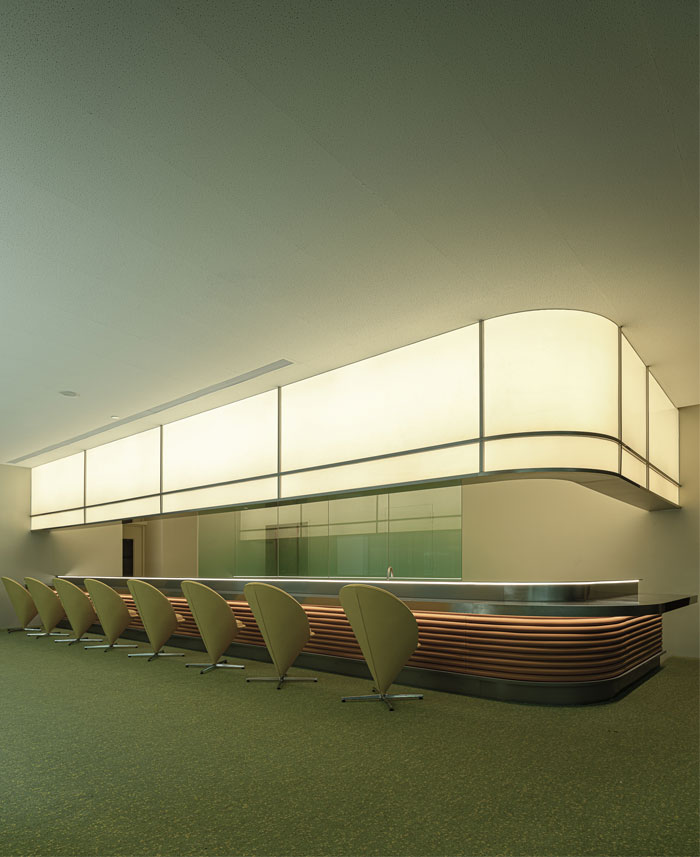 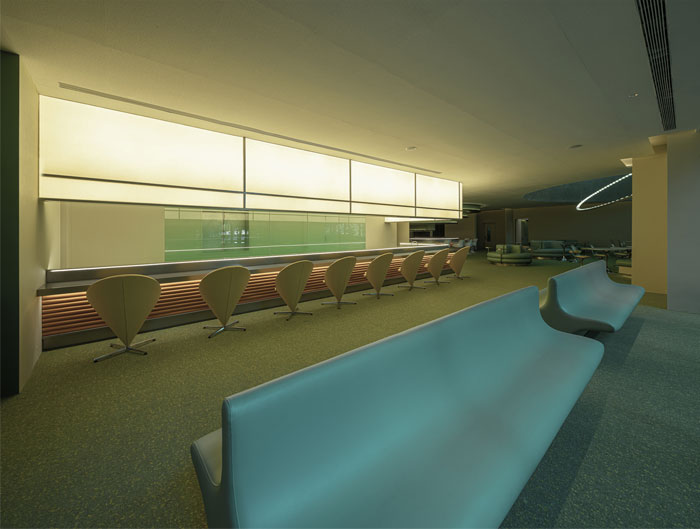 Retro style has always been prevailing. Various Associates utilized everlasting elegant and simplistic design languages to continue the deep impression that the 20th century left on the world. Classical hues such as green, blue and yellow are covered with a layer of “grey shade”, which symbolizes the unknown and generates softer visual effects. Resin, glass panels, mirror-polished steel and other new materials are applied to streamlined functional blocks. Featuring ergonomic forms and soft leather upholstery, the customized chair and seat combinations offer comfortable experiences. 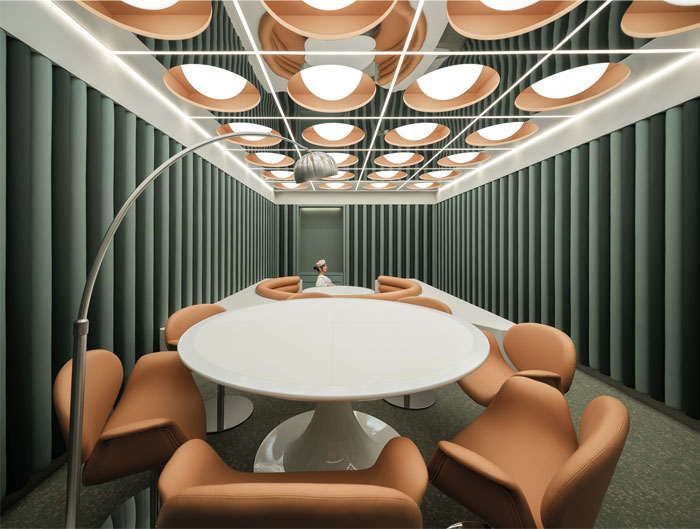 Comparing with present, future will never come, so it only exits in our imagination. However, classics which have stood the test of time imply a certain predictable trajectory of future. The space is like a “time door”, which leads to the future whilst in fact bringing people back to the “relative past”. Converting spatial experiment into something that’s everlasting and thought-provoking is what Various Associates has been trying to do. 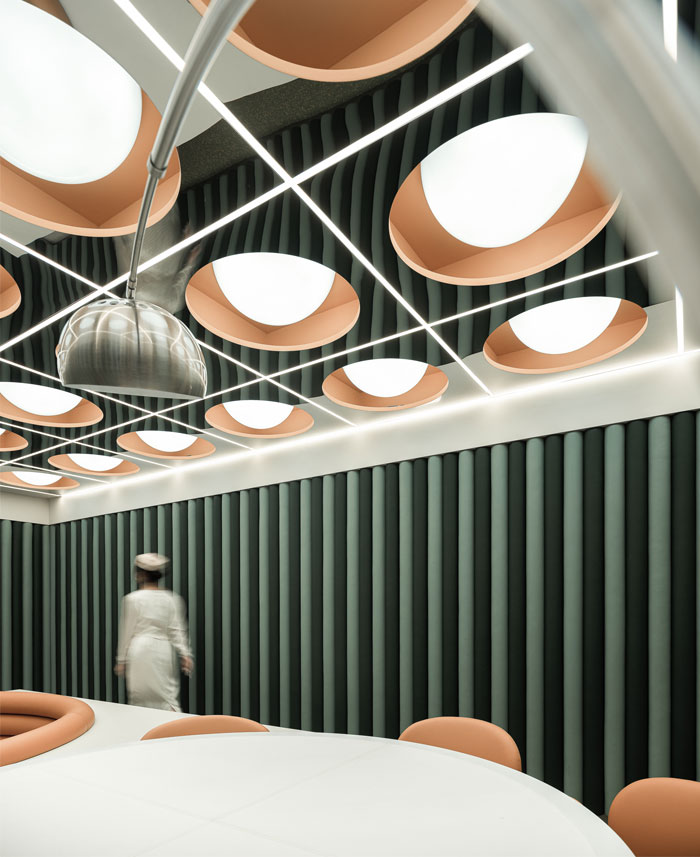 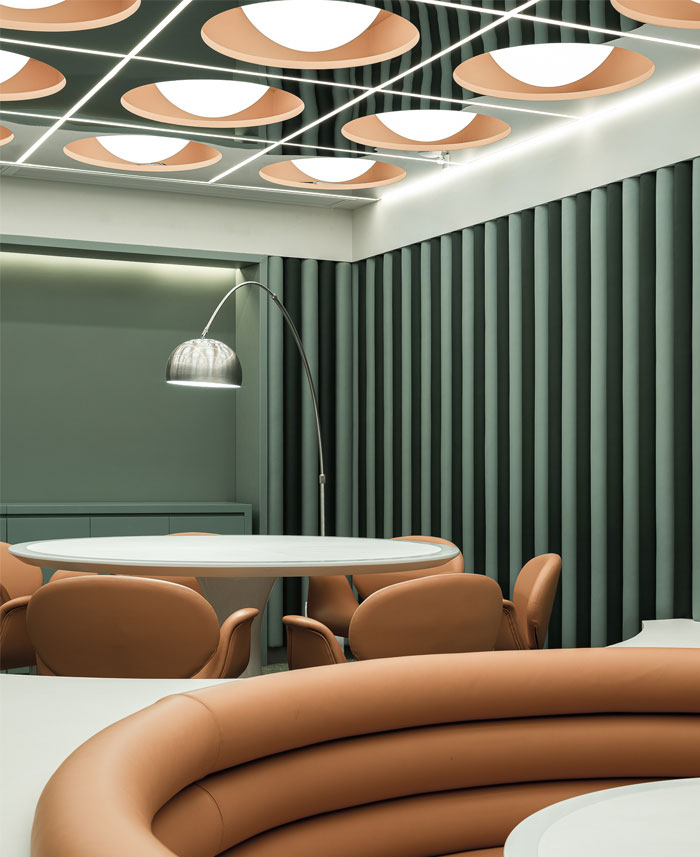