The venue is located in the central Kyiv, in the basement of the building erected in the early XX century. You would not miss it because a huge rabbit’s head above the entrance is noticeable from a long distance. The restaurant consists of two halls with a bar counter in each of them. Visitors can observe a cooking process in the open kitchen. There are 46 seats over there, one big table for 8 people and a terrasse. 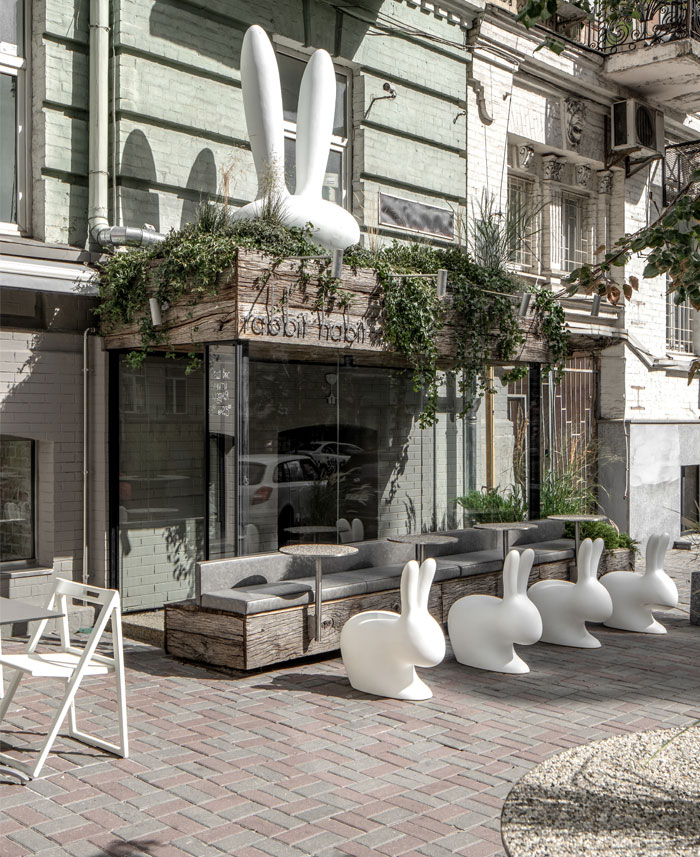 The main idea of Rabbit Habit’s interior is to combine nature and the rhythm of a city life. There is a lot of timber in the interior different in its shades and textures. Tabletops have an imitation of bark beetles, the main bar counter built from wooden blocks has a beautiful pattern of squares in its end. You can see massive timber elements on the entrance. They were brought from the Carpathian region where they used to serve as beams in an old house a long time ago. Small stone dust on the floor, in WC, and on tabletops on terrasse makes the interior as touchable as only possible. 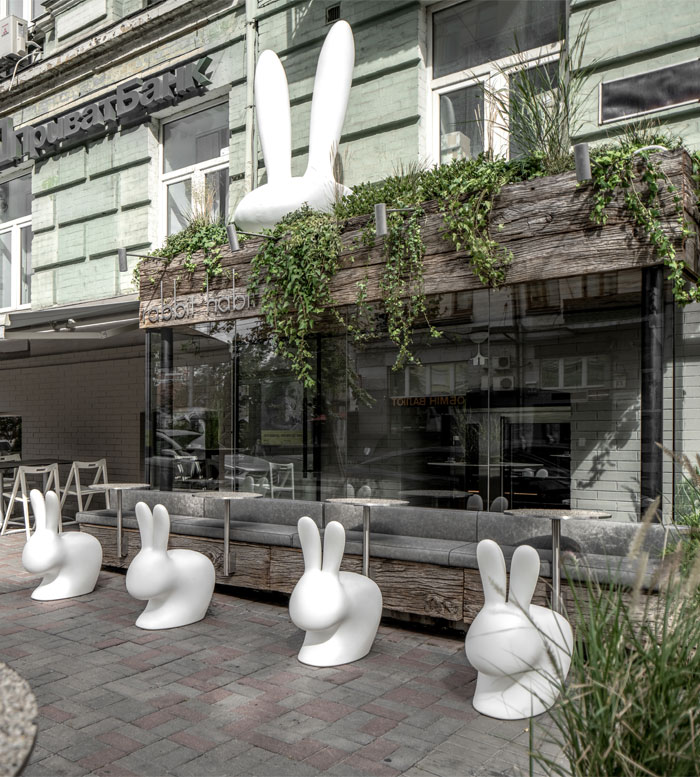 The symbol of the venue is a wooden rabbit’s sculpture cut of ash. They are everywhere – the biggest one is placed next to the register, middle rabbits stay on the counter and shelves. A waiter brings a check to a client pinned to a metal plate by a tiny wooden rabbit with a magnet inside. On the wall and sound protective panels on the ceiling, you can see a pathway of a rabbit’s footprints.
The low ceiling was one of the main challenges of the project. Designers decided not to make it lower, but arrange the air-conditioning system inside the pipes with quite a small diameter under the ceiling. Cone lamps above tables were made from the same kind of pipes. 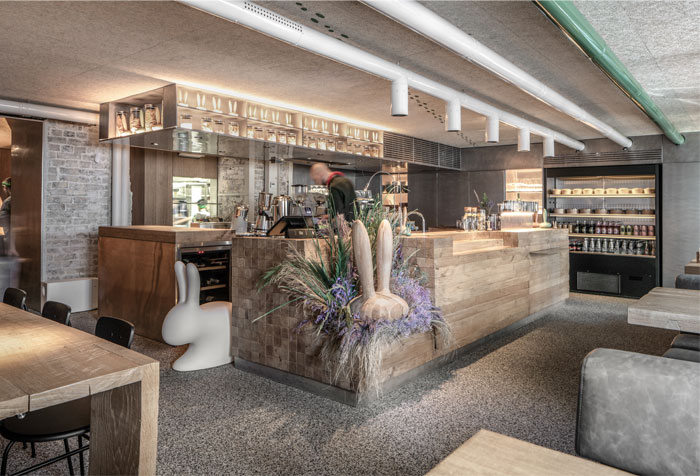 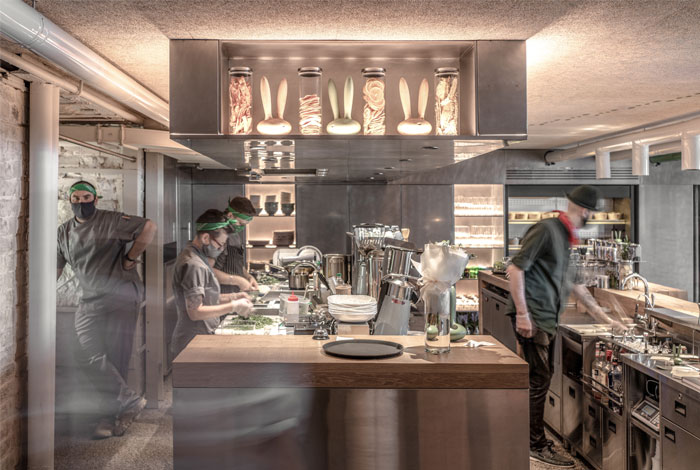 The second hall doesn’t have windows, an atmosphere there is maximum chamber-like. Rounded walls and a big installation of dried herbs on the ceiling create a relaxing mood. There is a salad-bar which transforms into a bar-mixology at 7 P.M.
On the terrace, you can sit on the Rabbit Chairs by Stefano Giovannoni and Qeeboo. They are highlighted from inside and make this area noticeable in the evening Kyiv’s street. High steel tables with green herbs planting in the center keep the general idea of being close to nature.
– On the 7 P.M., our rabbit turns to his ears, and the restaurant from the healthy food changes to an easy-bar. The atmosphere is changing as well. The evening lighting scheme is cozier and chamber-like. The interior we created works well in both scenarios. – Volodymyr Nepiyvoda, co-founder of YOD Design Lab tells. 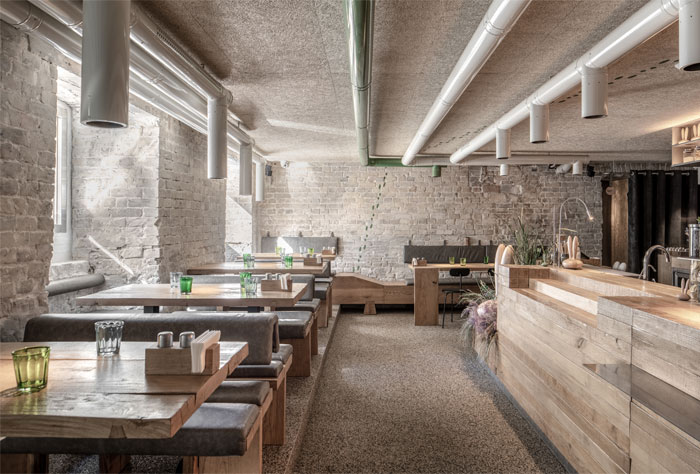 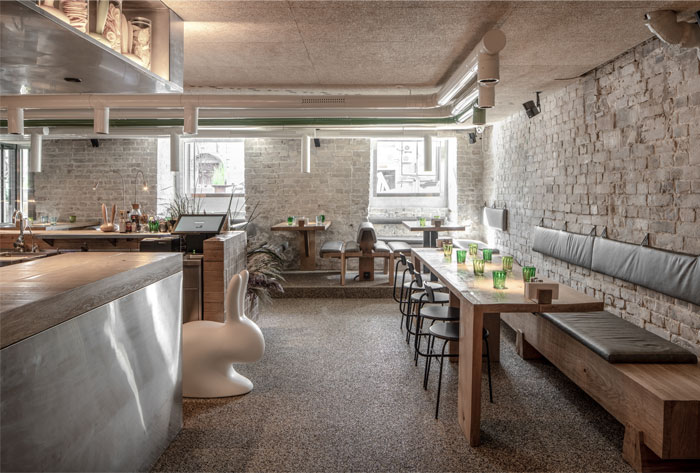 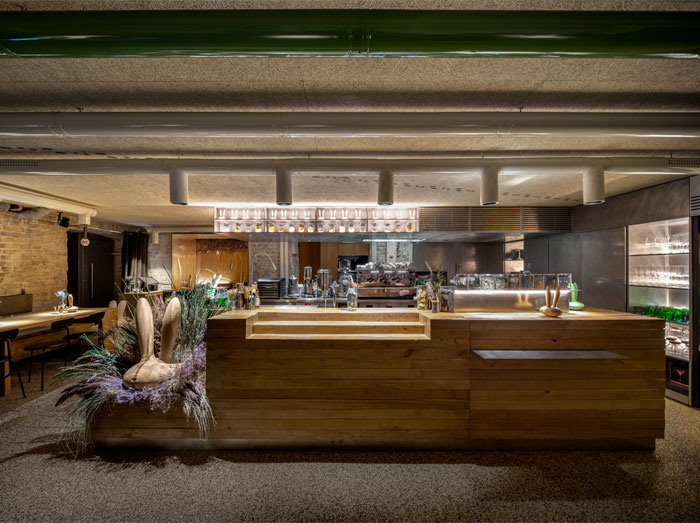 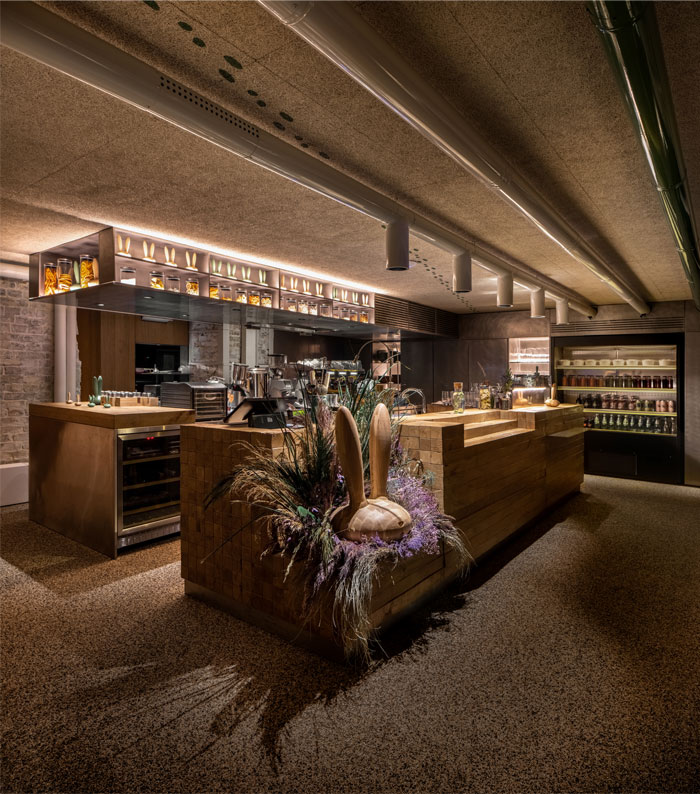 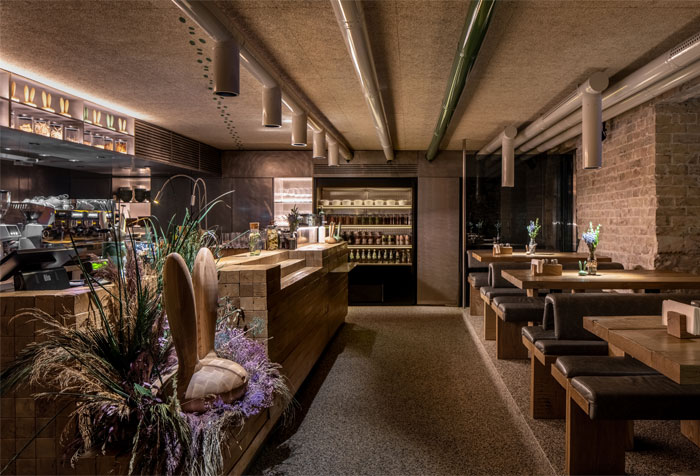 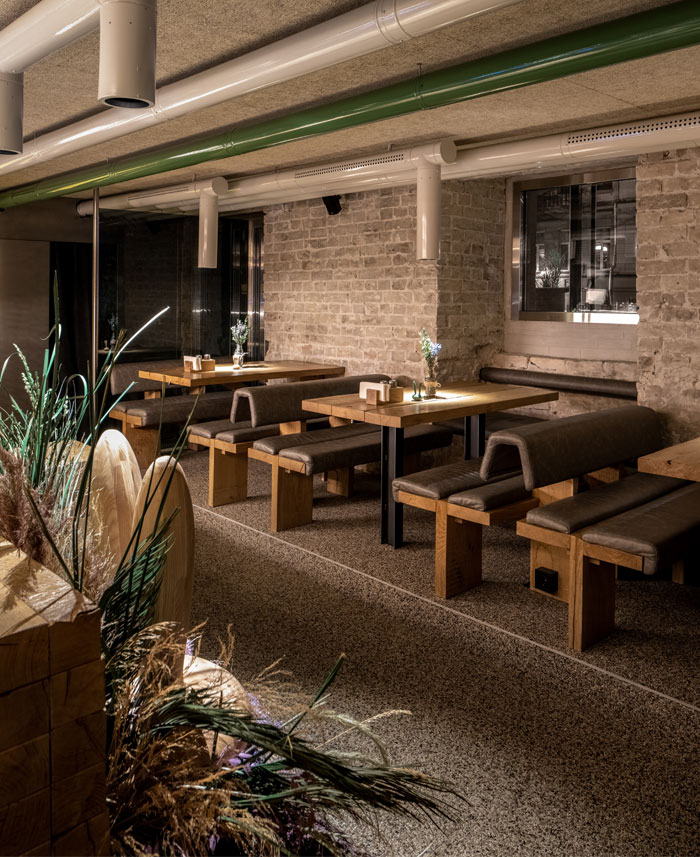 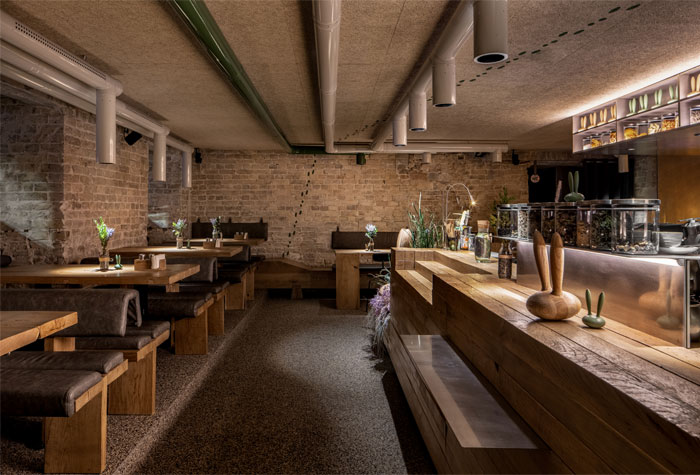 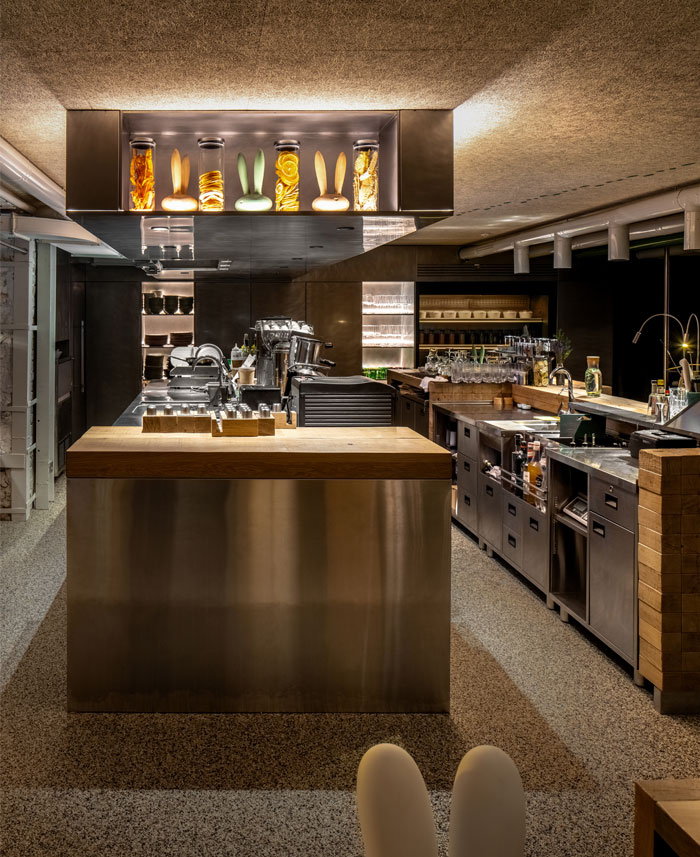 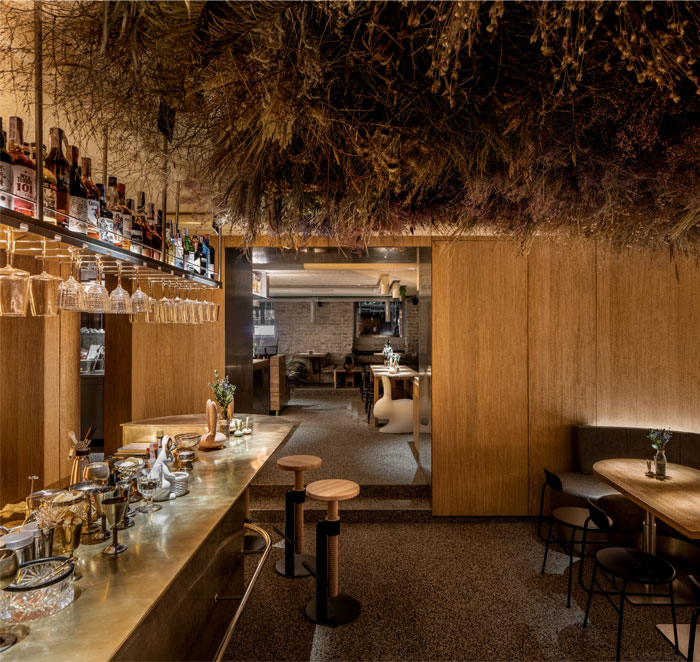 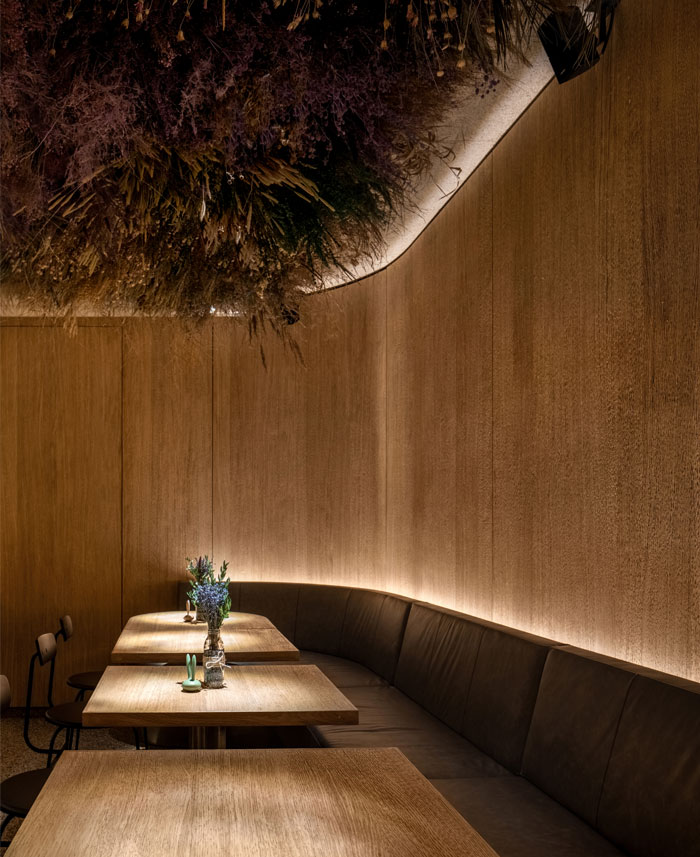 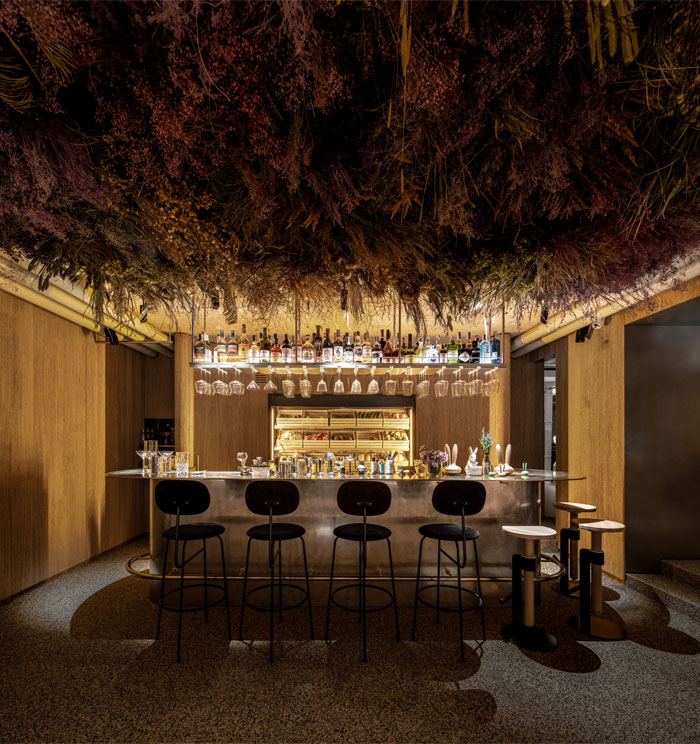 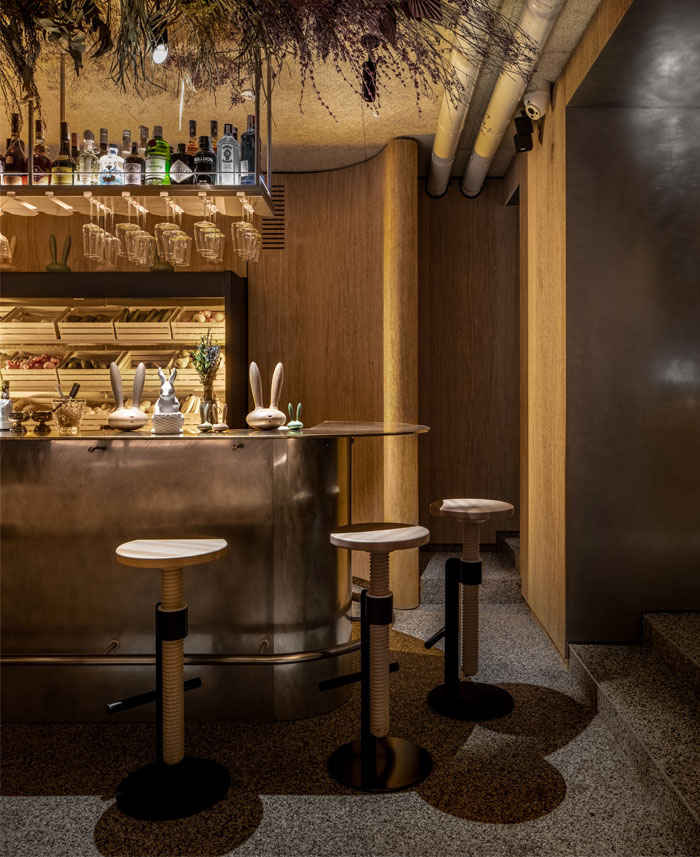 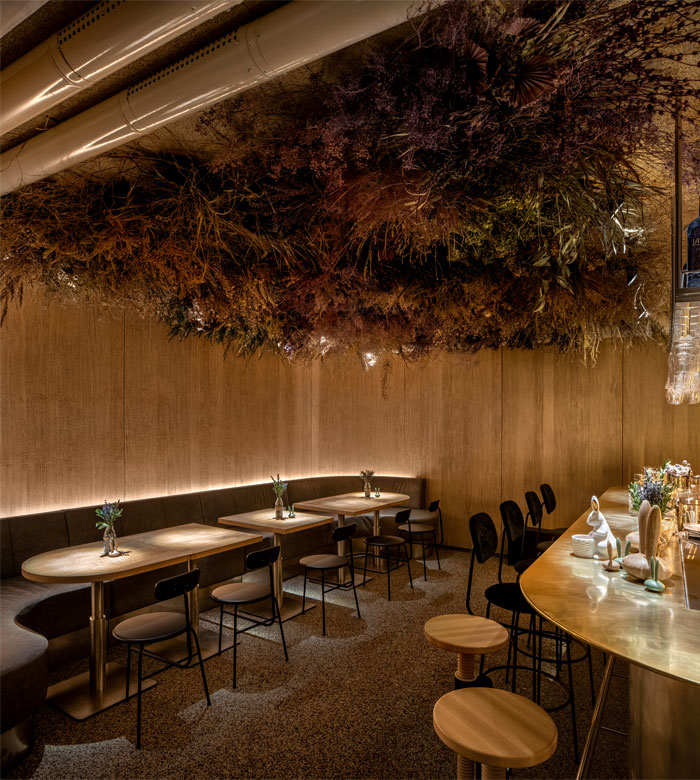