Private residence designed and built for sale. The owner turned to Andrey Sokruta Workshop to create a property that everyone could potentially enjoy! The architecture was intended to be modern and functional. The interior was supposed to be as neutral as possible, but stylish and attractive. It was important to strike a balance and not go too far in the direction of too pretentious minimalism, to avoid particulars. Therefore, the designer-architect Andrey Sokruta decided to work in the direction of a comfortable minimalism. The working title of the project is also understandable and natural EQ – Equilibrium, which means “place of balance”. 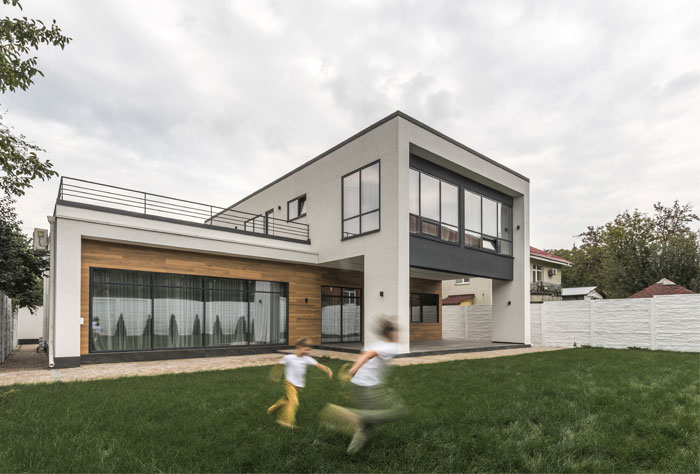 The architectural shape of the house can be divided into two large parallelepipeds, which are in perpendicular contact with each other. The first floor “lies” along the street, while the upper one is opposite to it: thus creating canopies, which are supported by columns. Both overhangs have their own functions: a shelter for two parking spaces and, from the side of the courtyard, the canopy is a roof for the lower terrace and an exit from the kitchen. 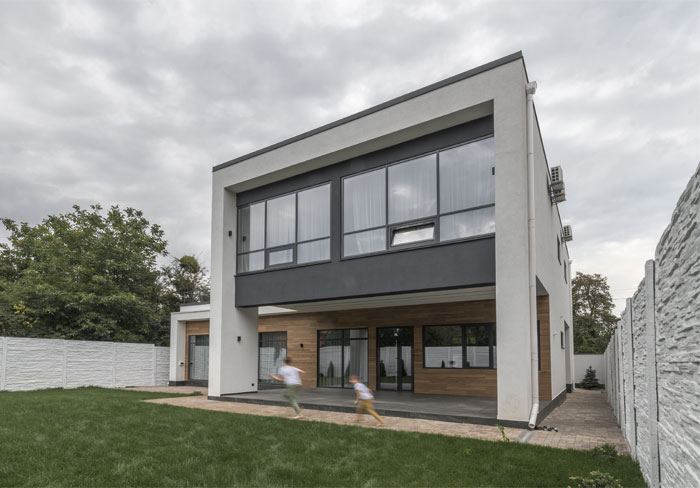 Working with a turnkey private house, Andrey Sokruta Workshop paid attention to the unity of the exterior and interior solutions. They continue in each other stylistically, formally and textured. For example, wood-like tiles on the facade also penetrate the interior, which is visible from the street through a large panoramic window.
Feature of the architecture of the house: the most practical use of the area. Striving to minimize the number of non-functional areas, such as corridors and other spaces where no one spends time. In accordance with this idea, the original plan of the house and the layout of the internal premises were laid. 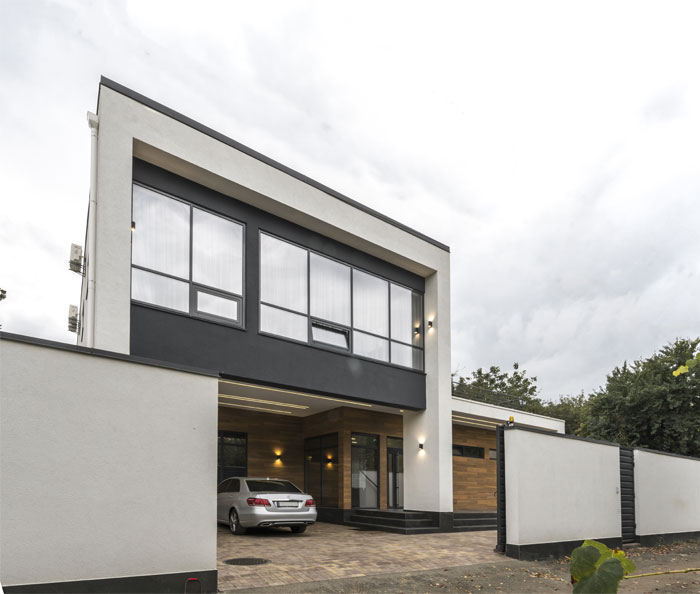 “When there is an opportunity to design a house from the foundation, you can envisage the desired location, size and combination of rooms, as well as the location of windows,”
Andrey Sokruta explains. In the project “Equilibrium”, the designer provided various floor-to-ceiling windows and all of them face the courtyard. This allowed to literally flood all the rooms with daylight. In addition to the “beauty” function, there is also a quite practical reason for such an arrangement: you can see the gates, cars, becoming clear who has arrived or left. Also, thanks to this layout, the interior looks light, filled with air. It does not seem to be squeezed into a frame, fenced off and outlined from the outside world, but continues with it”.
The view into the courtyard also opens from the stairs that lead to the second floor. It also has an exit to the roof of the first floor, where you can organize a stylish patio for relaxing with friends. 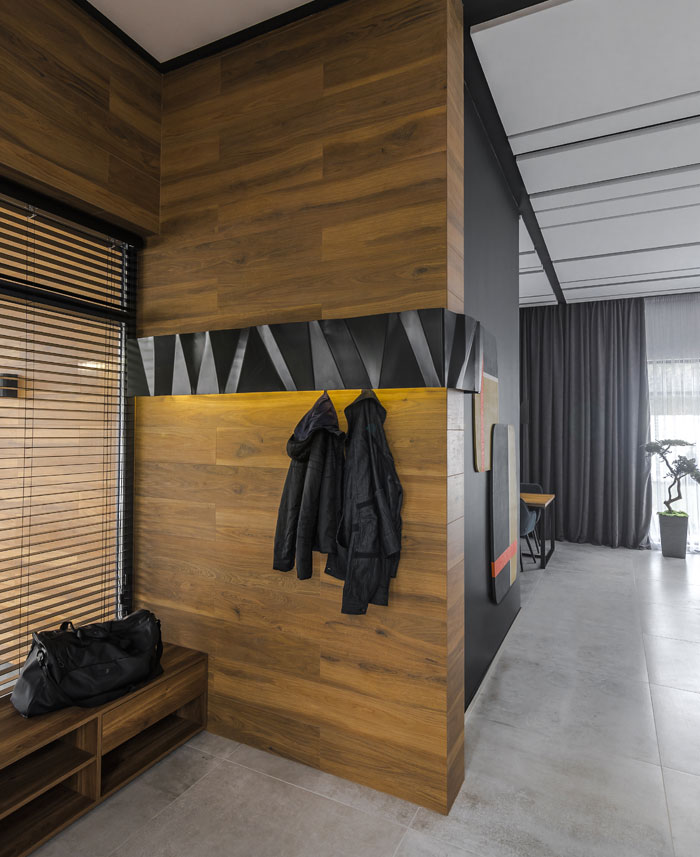 Since the project involved a reasonable investment, Andrey Sokruta Workshop thought over and developed many of the installations individually, so as not to resort to factory methods. For example, the need to mount tires on the ceiling under track lights has disappeared, thanks to the plasterboard construction of the ceiling with laminated chipboard, where black lights were embedded. This created long black niches on the ceiling, visually identical to the factory track systems. 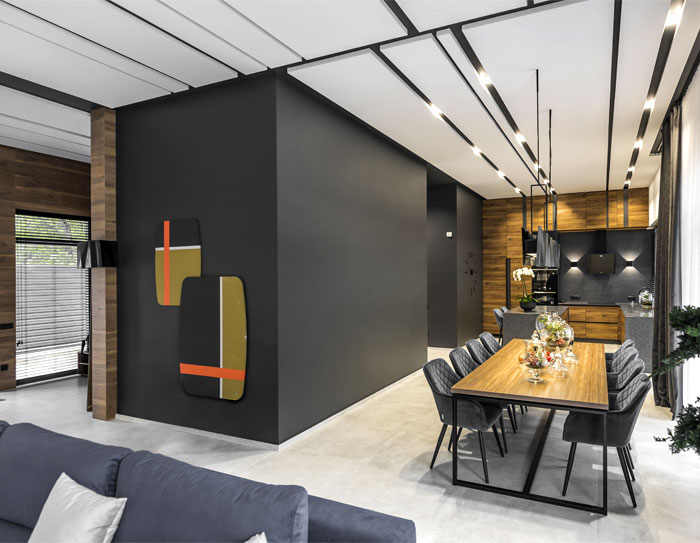 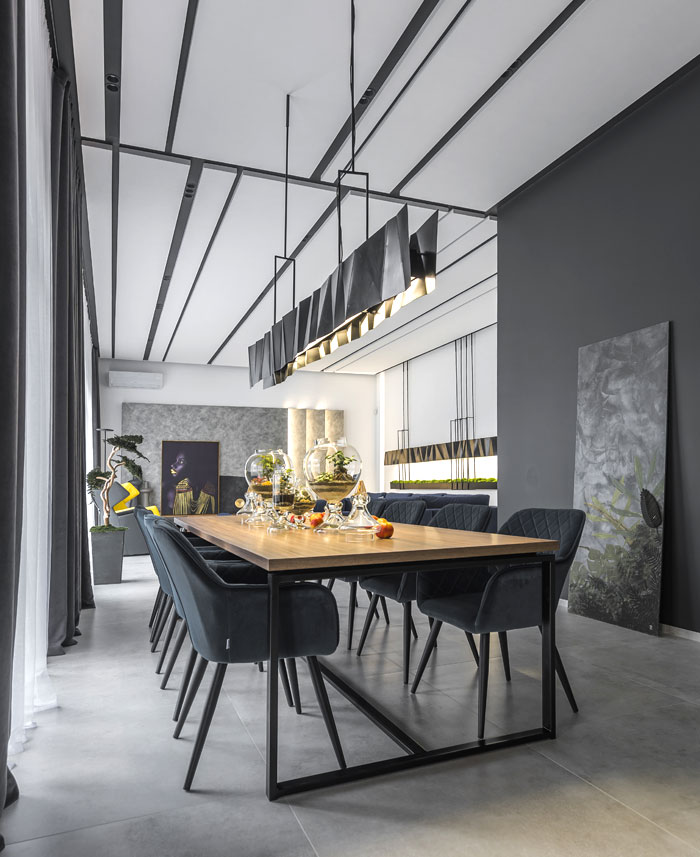 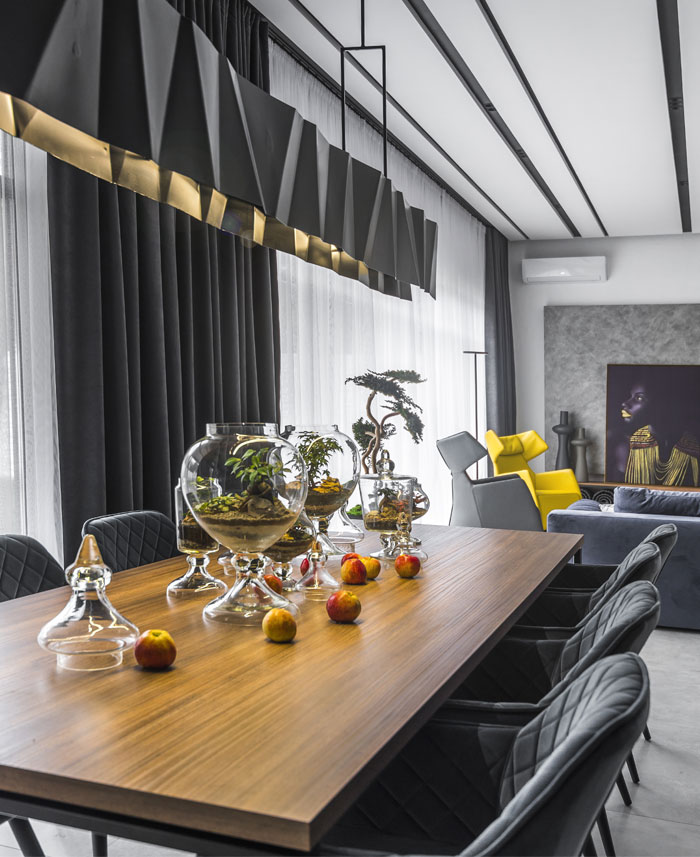 Decorative lamps in the interior were provided by the company “S.V.E.T. plus”, which works with Spanish and Italian brands. The designer lamps, which look like two sheets of metal bent in a chaotic geometry, are located also in the kitchen above the dining table. The other is in the living room area, underneath is a pots with stabilized moss – Moss Decor, florist Ihor Avramenko. The third element in this series is located at the entrance to the house and goes around a wooden wall and illuminates the clothes hooks. 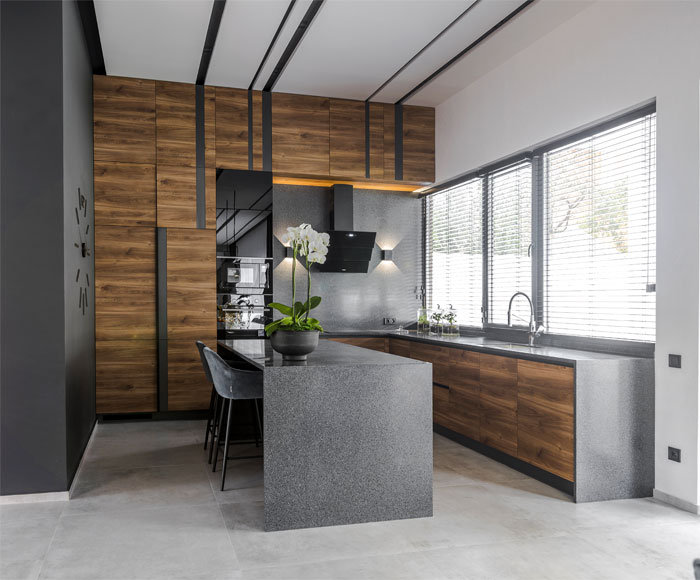 A distinctive feature of the living room interior is the plasterboard structure behind the TV, reminiscent of a modernist wall decor. Thus, the designer diversified the furnishings without using unnecessary decor. In general, the entire interior: color fragments, furniture – are broken down into clear, simple shapes. They are diversified by texture and modern decor, such as landscaping by the floral designer Ihor Avramenko and panels in the style of constructivism by Dmitry Davydovsky. 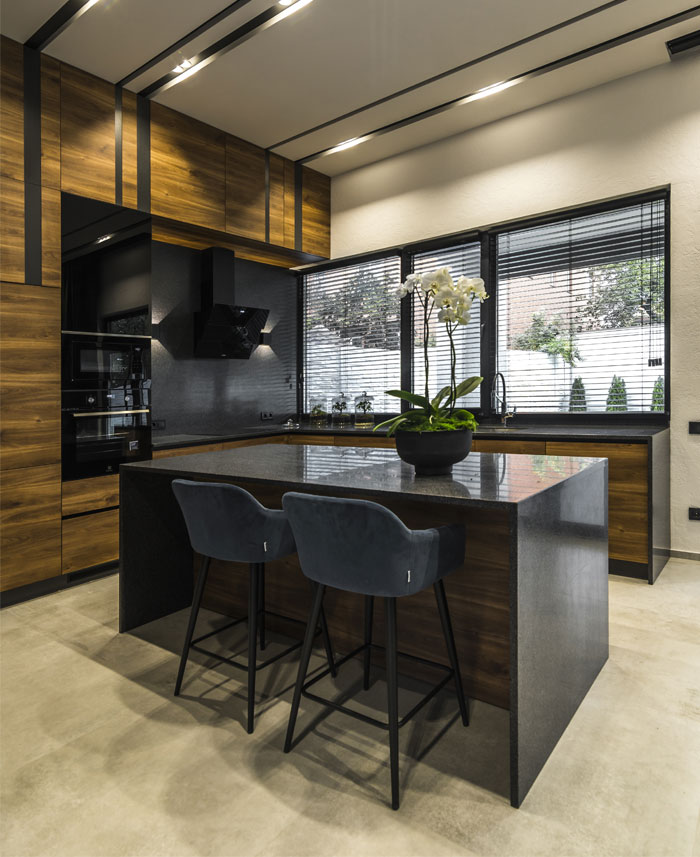 All materials and colors: as simple and understandable as possible, there is a desire for eco. The kitchen most vividly embodies the main idea of Andrey Sokruta Workshop: a working area and an island in the form of strict monoliths of stone and wood-veneered facades. All storage systems in the house and bathrooms are designed according to the same principle. According to the principle of Occam’s Blade, everything is reduced to the essence: ergonomics, functionality, full rights of daylight and natural, solid textures! 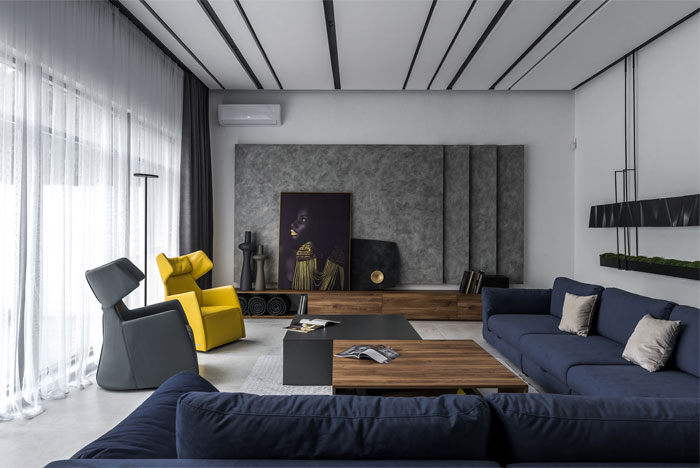 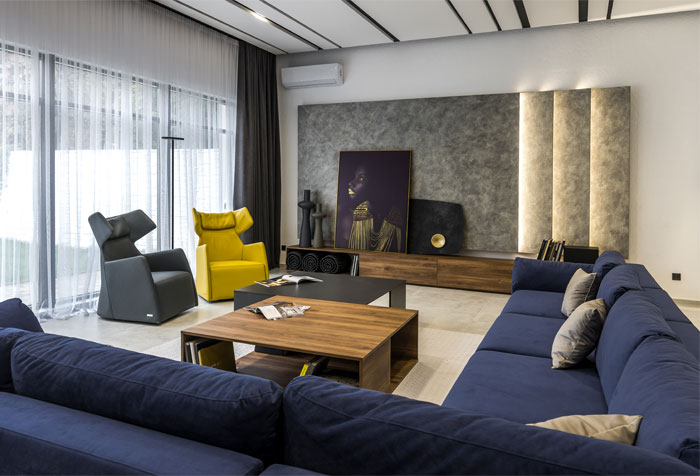 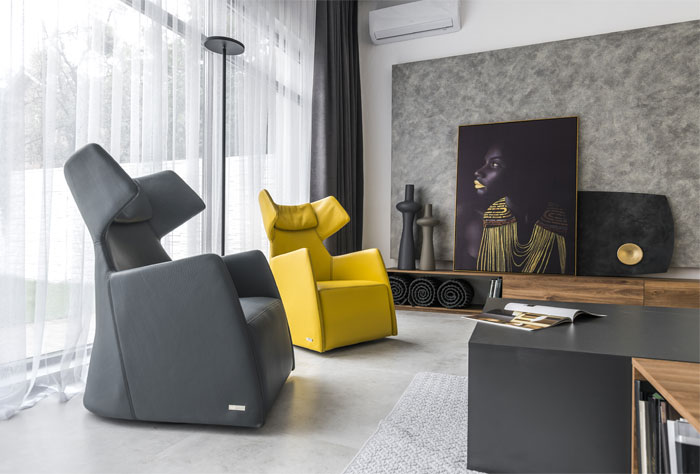 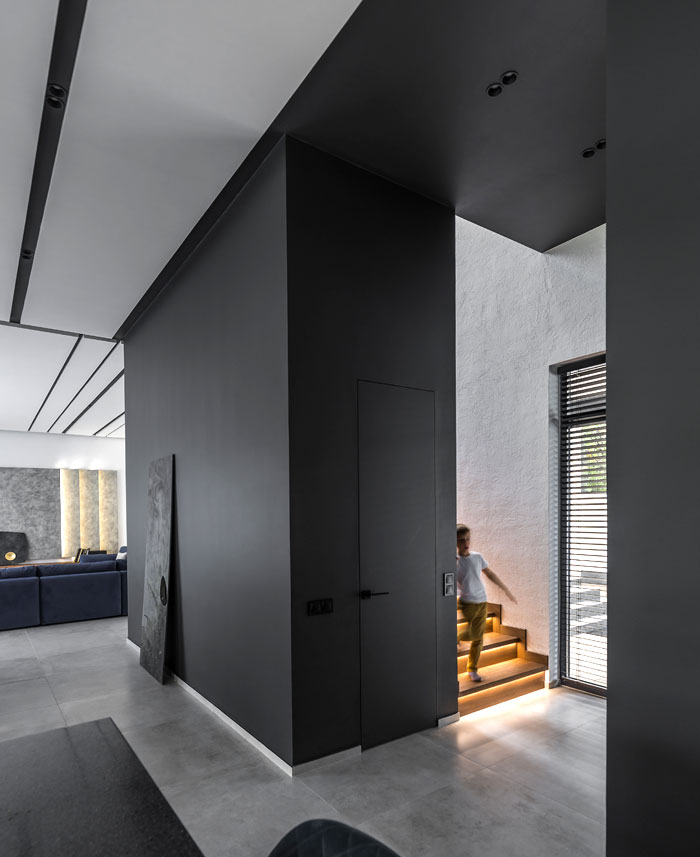 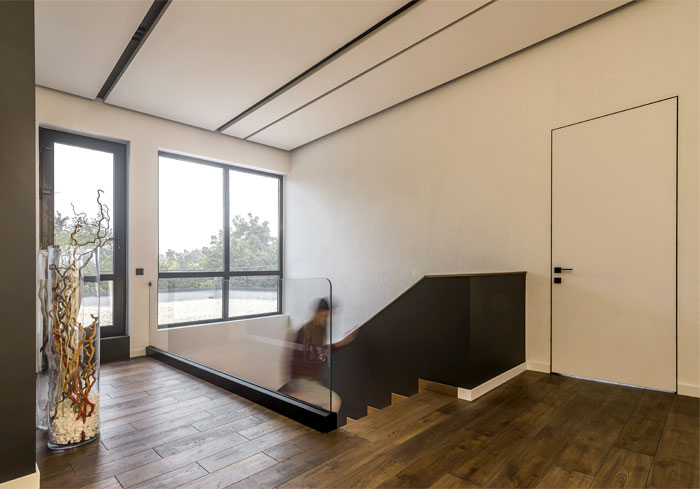 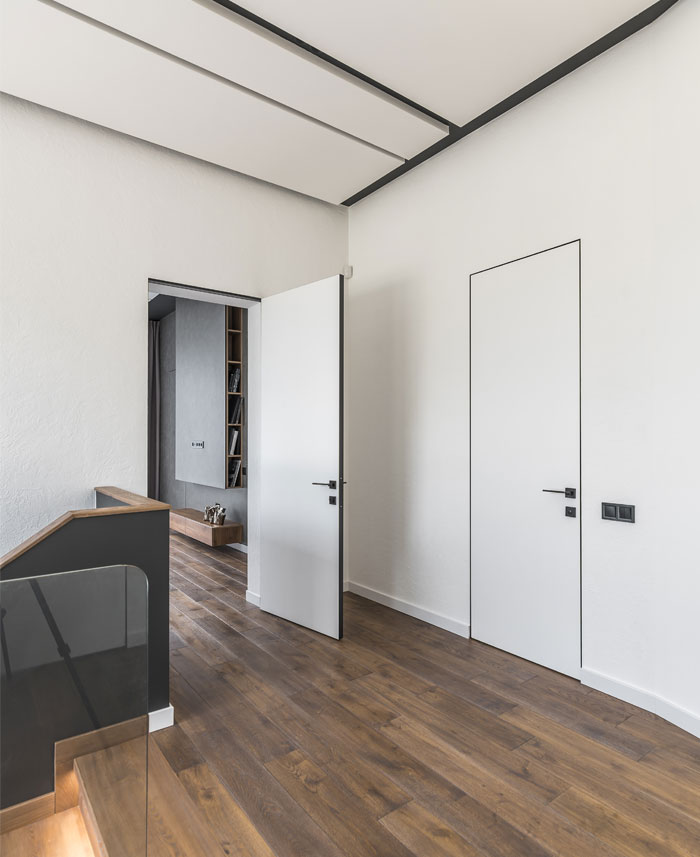 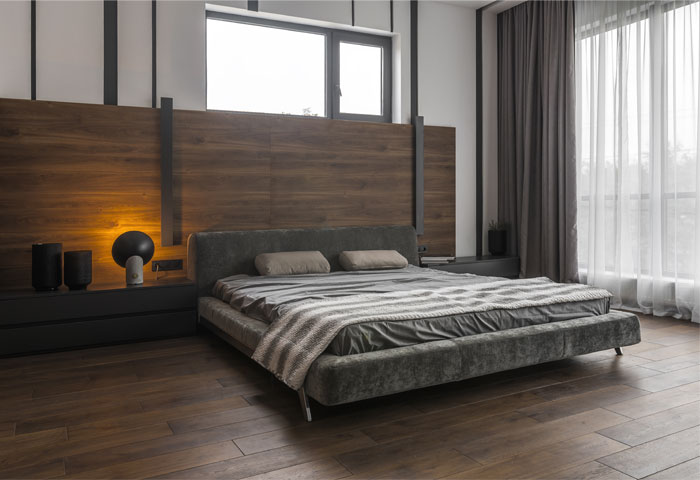 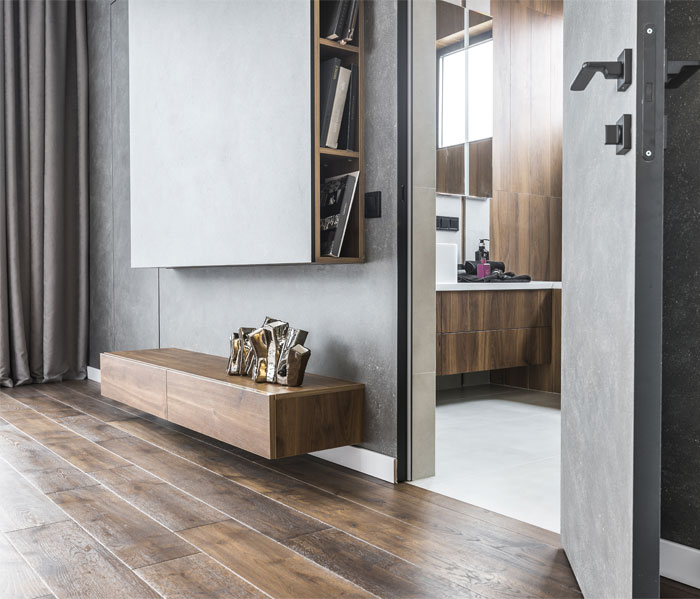 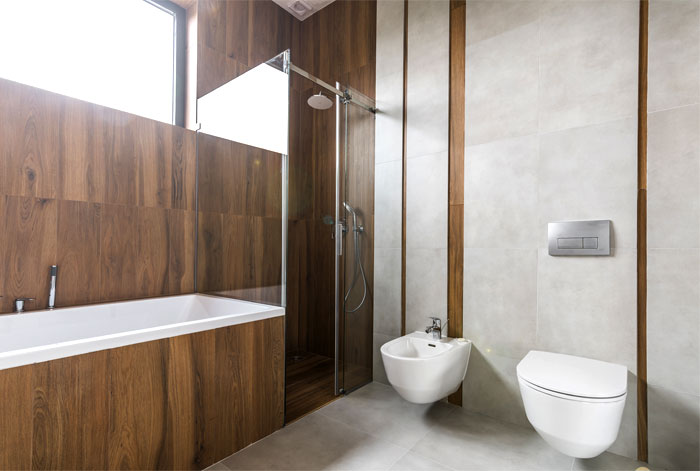 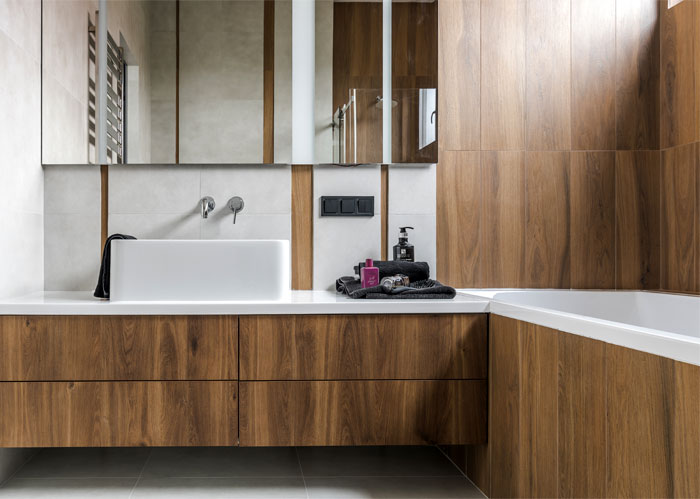