The “Rose-Mary” project is a continuance of a special collaboration of like-minded people, Yova Yager, a chief designer and a founder of Yova Yager hospitality design studio and a customer, Anna Andriienko, an owner of the “Alltrueeast” restaurant. The main idea of this project is making responsible transformation of the old industrial building with the accurate preservation of its authenticity to a modern city cafe within the small budget. To create a space with a simple menu and special zoning, where any guest from a neighbouring office centre and co working can find their favourite place. 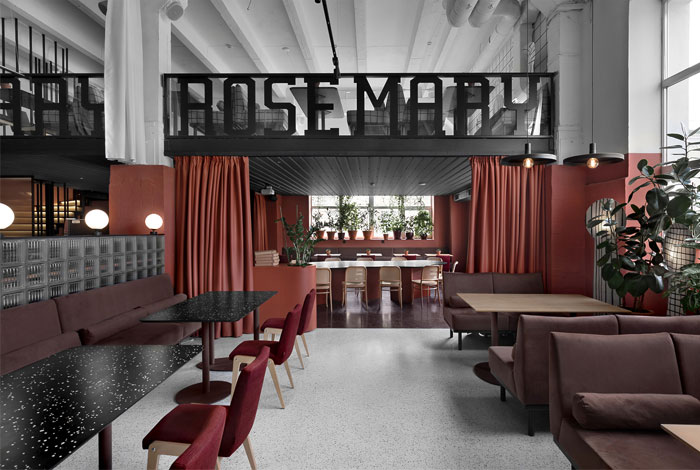 “Rose-Mary” is a cafe of 320 sq.m. with an unusual for Kyiv work schedule and format in general. On the one hand, as a classic business cafe, “Rose-Mary” pizzeria works on weekdays, opens at 8.00 and offers breakfast and business lunches. On the other, at weekends there are held lots of special events, so that the cafe is fully equipped for such cases with a large screen, a projector and a gaming area. The 120-years-old building, which houses the cafe, belongs to the knitting factory in the name of Rosa Luxemburg, as it was called in the Soviet times, or just “Rose”, as it is today. Its historic heritage embraces different eras, being transformed in four architectural styles from Gothic to Constructivism*. 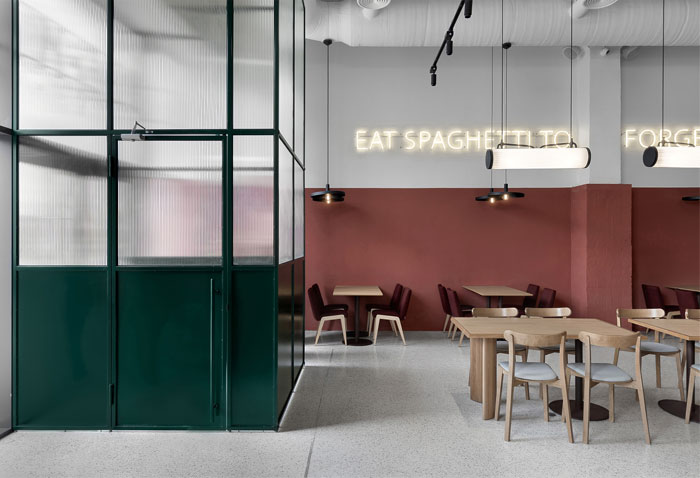 Today, in front buildings of the complex there are an office centre and a coworking place made in the 21st century style, which is actually not easy to define. Also in one of the rooms now is the city cafe “Rose-Мary”, named both in memory of the legendary factory and also because of rosemary – a favourite seasoning in Neapolitan pizza recipes, which lays in the basis of the menu. As a symbolic element of the concept of rosemary can be found in tables’ decoration and beverages – tea, lemonade and cocktails. 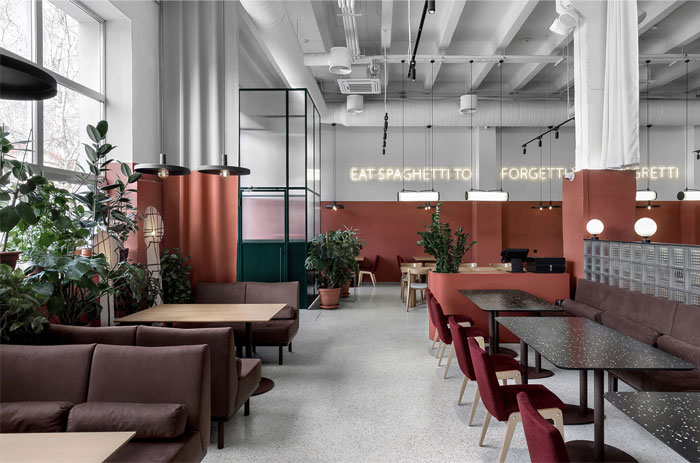 Anna Andriienko, the owner of the establishment, says that she has been inspired by various projects around the world, especially american ones, where designers restore old factory premises and giving them a chance of a second life. For example, the Pinterest office in SF, Bread street kitchen in London or Wework offices. 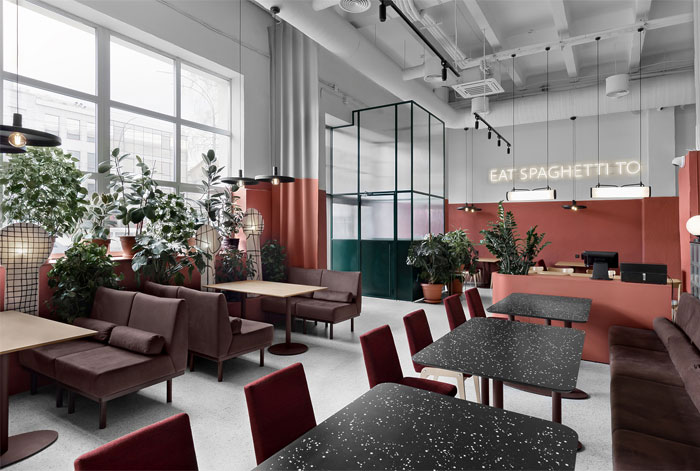 “When Yova and I saw this space, we realized that we need to maintain maximum authenticity”. So that it was decided to leave the original ceiling and walls, keep the tiles on the columns, and reconstruct the old window glass blocks. To get the feeling of naturalness there are used wooden materials and textured various shades of terracotta from burnt clay to the color of blood and wine. The greenery of living plants places throughout the space refresh and soften herbaceous and mustard shades of complex red on the walls, furniture and decorative elements. 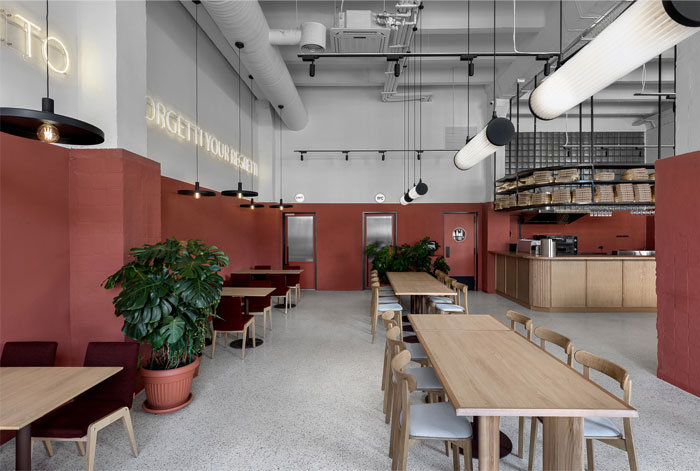 In her desire to realize “the less is more” principle, a designer Yova Yager proposed minimum of decorations, using only living flowers, oxygenating the cafe, and neon graffities. The walls are partly tiled with plastic lids recycled by the only local manufacturer, the Odessan company “Precious plastic Ukraine”. 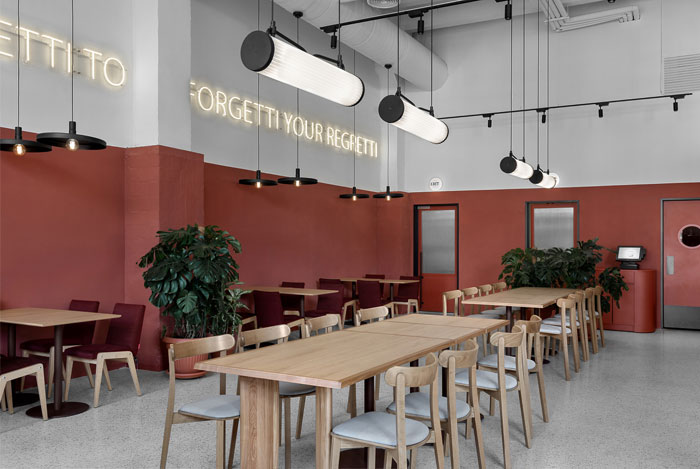 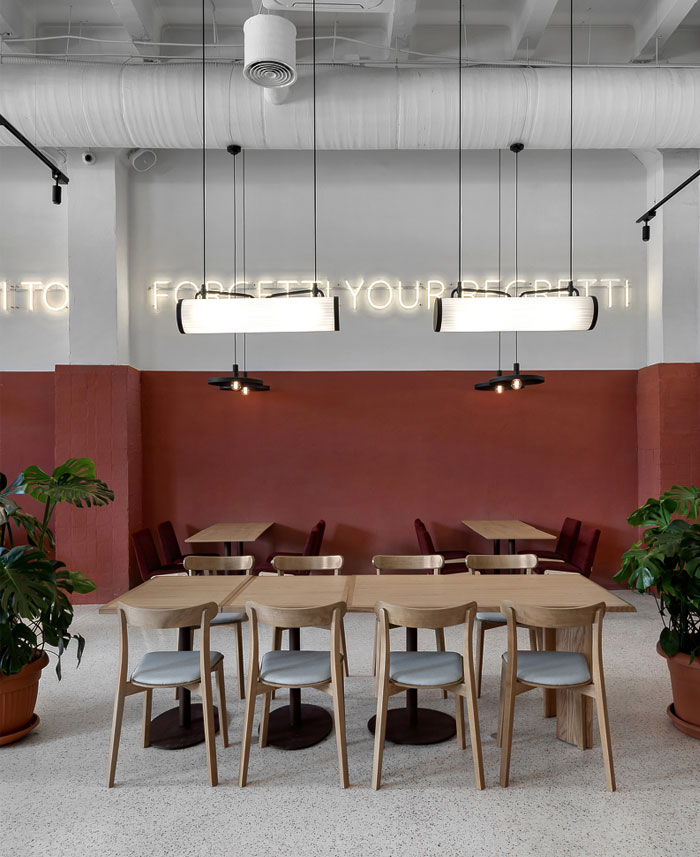 Thus, RGB LED strips with smart control system save energy and create a party atmosphere. Cylindrical lamps situated in the center of the first floor room are made from used fluorescent lamps. Standing lamps with paper lampshades made from old patterns of the “Rosa” factory are mixed with pots with green plants. The cafe offers four main zones: a common room with a varied seatings, an open bar-kitchen, a meeting & play zone under the balcony and the balcony for having private atmosphere. Pizza is prepared in the contact bar area, where you can watch the whole process of cooking with a glass of an in-house  rosemary aperol spritz. 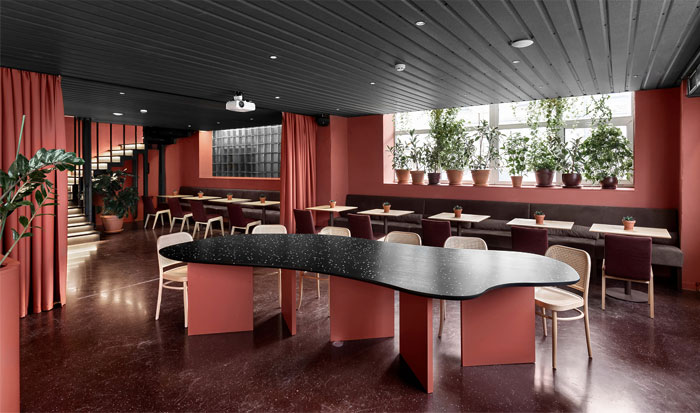 Meeting & play zone gives a possibility of an individual zoning. Guests can hold business meetings, celebrate special days or play games at the big wave-shaped table, made, like all other furniture, by the Ukrainian “Verdi” company. To be noted that Yova quite often uses custom design in her projects. So in this project are used chairs from the collaborative collection of Yova Yager and the “Verdi” company, designed specifically for the art and social project “Zhily-byly” (“Once upon a time”)**. 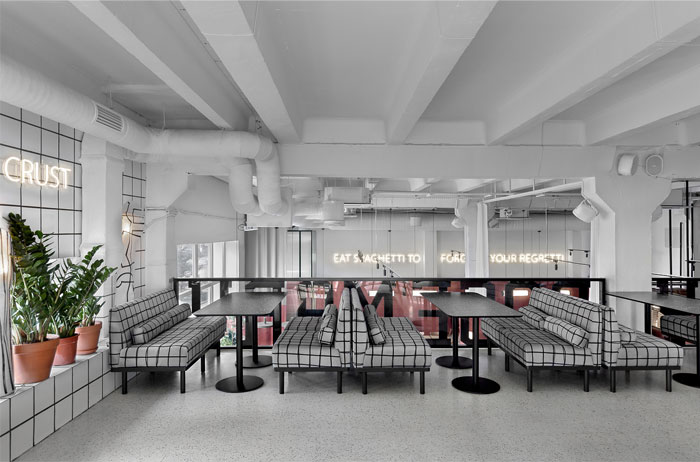 The stylistic contrast of the first and second floors expands the possibilities of the institution and makes it more expressive. The balcony, in contrast to the bright terracotta of the ground floor, is white, light, and monochrome. It solves the problem of low balcony ceilings and offers a quieter privacy or chill out with a DJ at the same time. 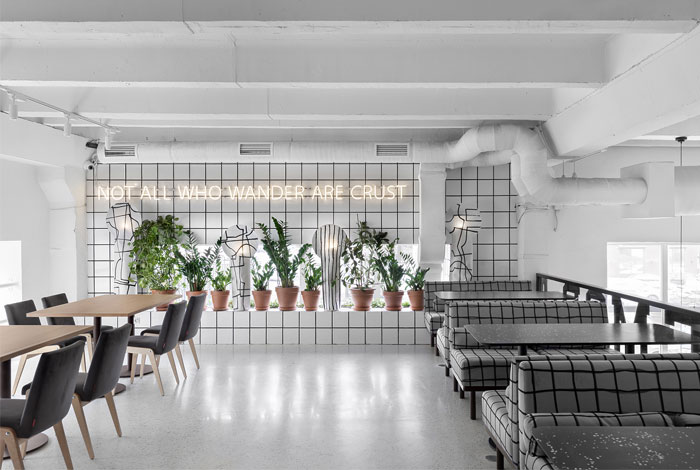 Generally, in everything from the concept to decorations and interior details, this project demonstrates the main principle of the Yova Yager hospitality design studio – first rethink, then design. This is an example of a meaningful approach in modern design, where an old, but significant industrial facility in poor condition is transformed into a useful for the city place with its own personality and saved authenticity. 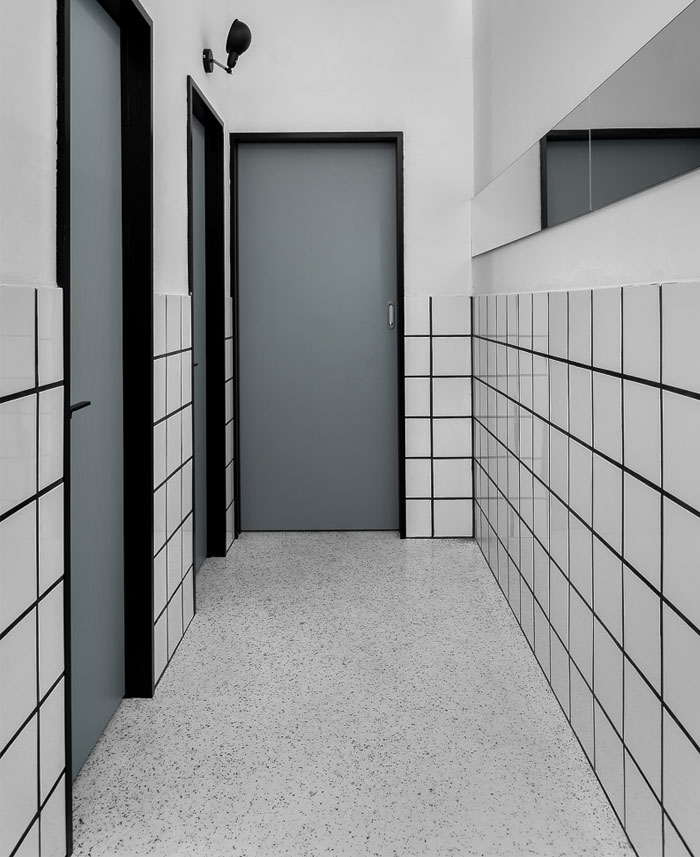 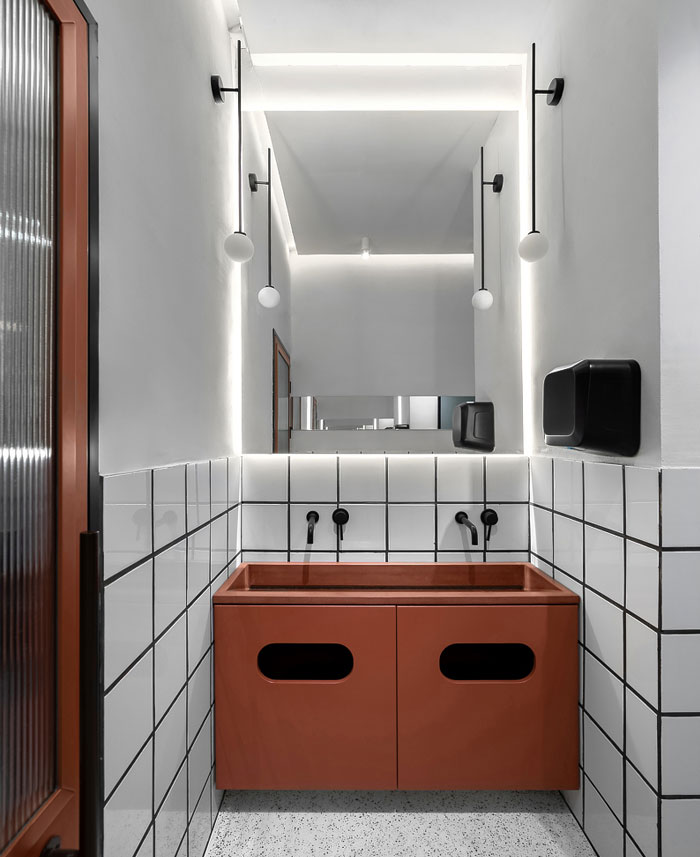