Nantou Ancient Town Renovation and Upgrade is a project launched to inherit the historical context for more than a thousand years and recapture the memory of Shenzhen city. As a local emerging design studio, Various Associates was entrusted to participate in the cluster renovation of the Project led by Vanke. The studio has completed an “urban memory exhibition hall” in the core area at Nanbei Street — the demonstration section of the Project. 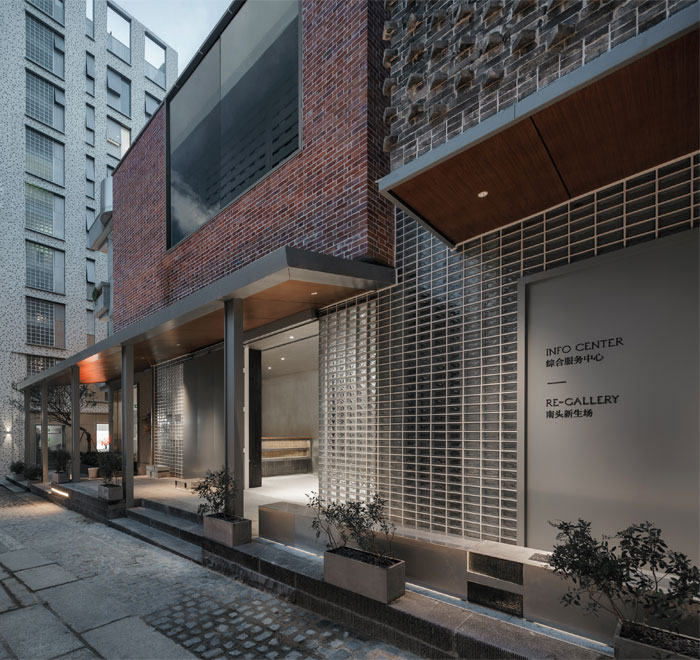 40-year rapid development, thousands of years of history
Situated in the heart of Nanshan District, Shenzhen, Nantou Ancient Town has witnessed the rise of Shenzhen (China’s first special economic zone) from a small fishing village into an international metropolis in just four decades. However, its vicissitudes are rarely known. With a nearly 1,700-year history that dates back to Jin Dynasty, Nantou used to be the administrative center and a key sea defense fortress at coastal areas of Lingnan Region, and also the epitome of integration of Central Plains Culture and Lingnan Culture. 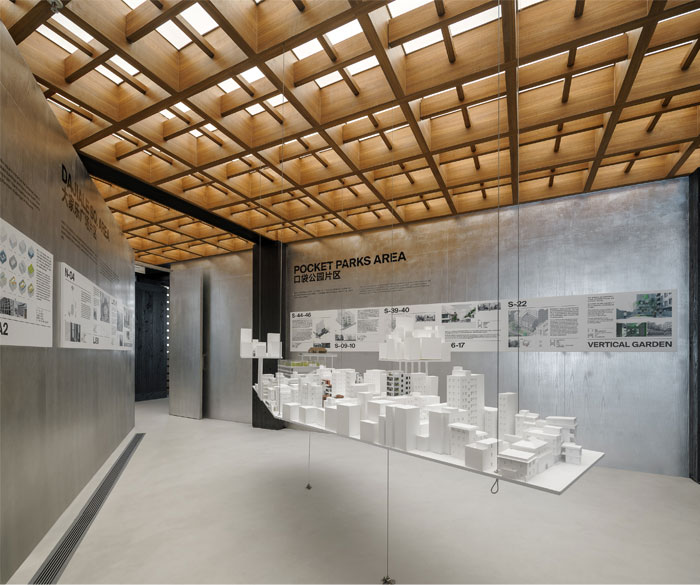 In the context of urbanization, Nantou has now become an “urban village” — a living quarter for new immigrants to the city. The “urban village” is a place of paradox, which seems to be disorderly but is full of vigor. Various Associates respected site conditions, traced the origin of culture, and tried to inject the new to the place via adaptive regeneration strategies. 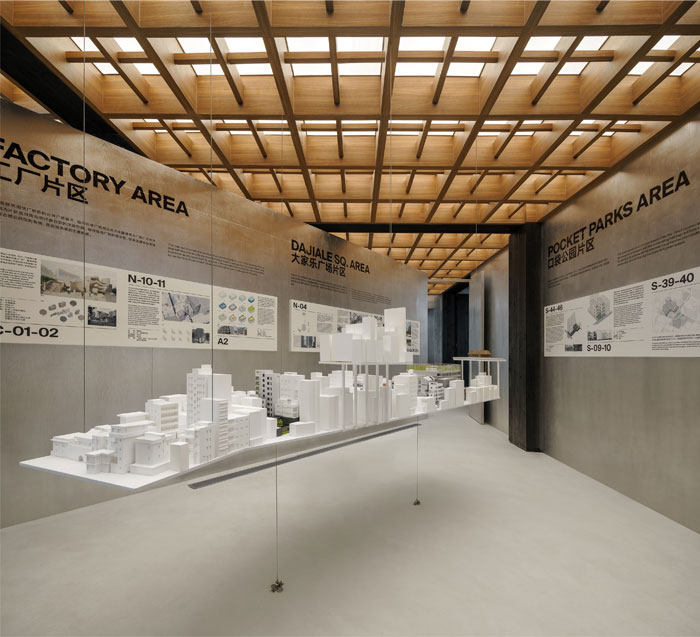 As Various Associates took on the design task, the architectural structures of this “urban memory exhibition hall” were completed. The building consists of three connected irregular historical blocks, which feature a great many beams and together constitute an irregular plane. Due to time limit and security considerations, the positions of stairs and beams in the building cannot be adjusted. The building functions as a comprehensive service center, and also an information center that exhibits the renovation and changes of Nantou Ancient Town. Within 250 square meters, it needs to accommodate a variety of functional spaces including reception area, depository area, office, washrooms, meeting room, shared coffee area and exhibition space. 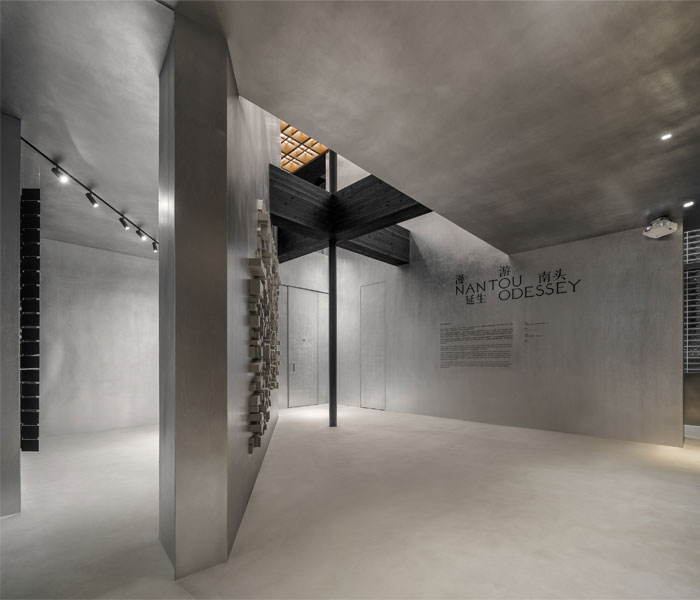 Under restricted site conditions, Various Associates firstly considered how to break the existing single visiting circulation as well as spatial limitations to link up human flow on the two floors, and how to endow the space with a distinct identity while maintaining a low-profile yet modern Chinese-style spatial ambience. 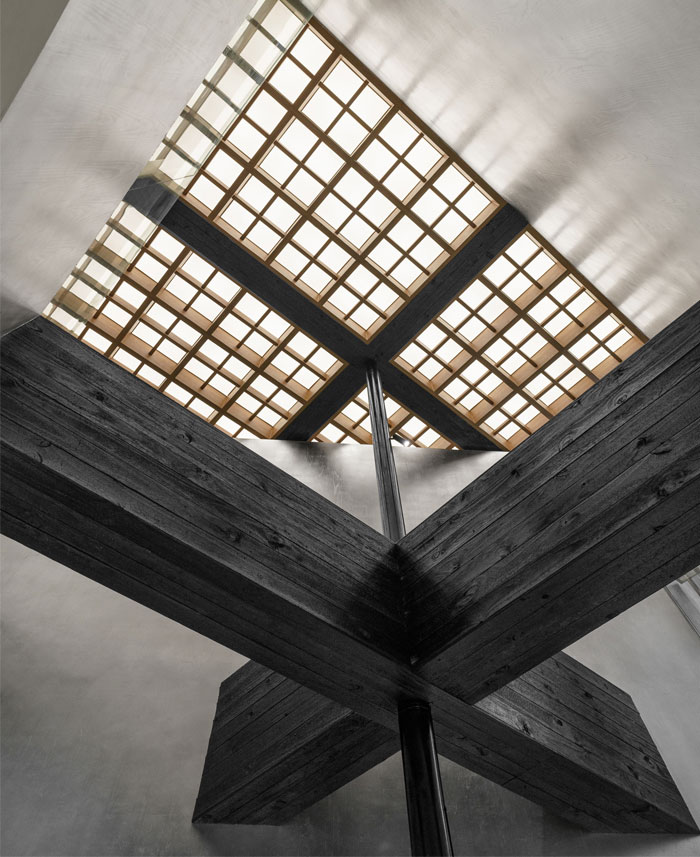 Twisting corridor inside the walls
Drawing inspiration from verandas in Lingnan traditional architectures and gardens, the design team intended to create a zigzag corridor to connect the architectural volumes and produce an endless realm within the limited enclosed space. The corridor also serves for resting and display, which is consistent with functions of the entire space.
A full-height inclined wall was inserted into the fixed plane, in order to create a unique sense of space. Besides, the slanting wall helps to shape a triangular double-height atrium, which links up the two floors whilst forming a fun visiting circulation route. 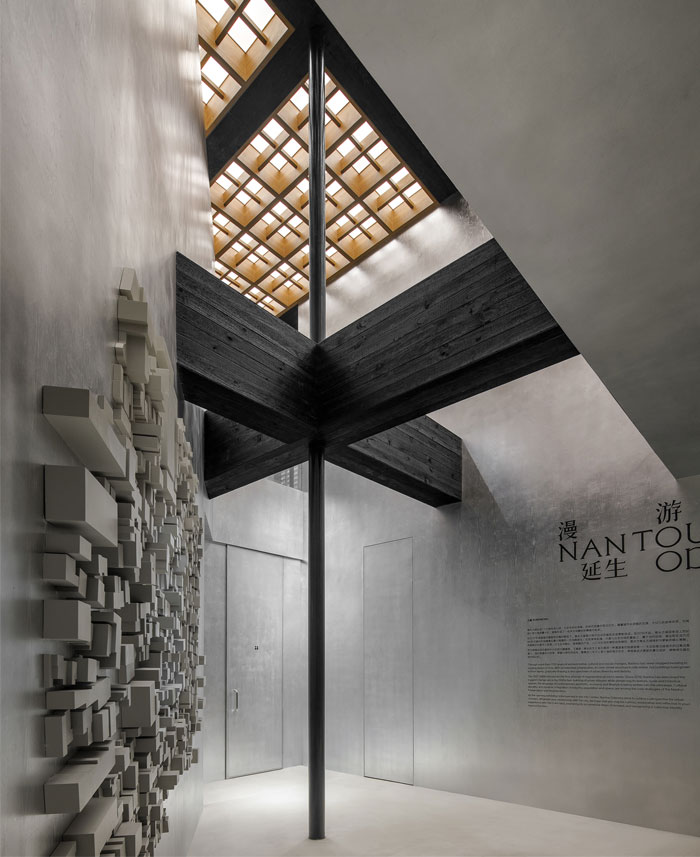 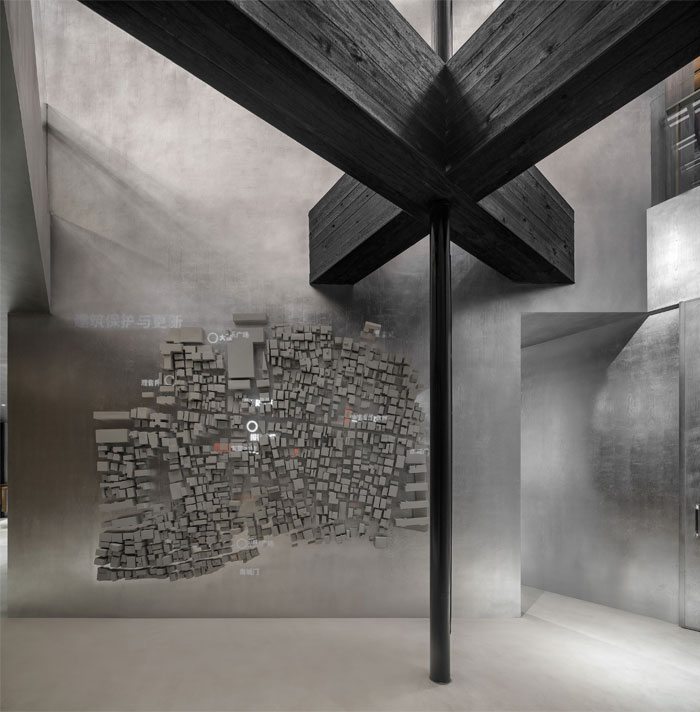 Superposition, coexistence and integration into the street block
Various Associates is always bold in material and color treatments, while this time the team adopted a more subtle and neutral approach, with rustic material textures and low-saturation hues extending from the facade to the interior of the concrete construction.
The material palette of the interior space mainly consists of gray brick and wood — two typical materials of tradition Chinese architecture. With different combinations and textural collision, the materials show their evolution in traditional and modern context. Gray bricks, teak wood and charred wood carry the trace of time via natural grain, and dialogue with the old walls scattered at the street block. 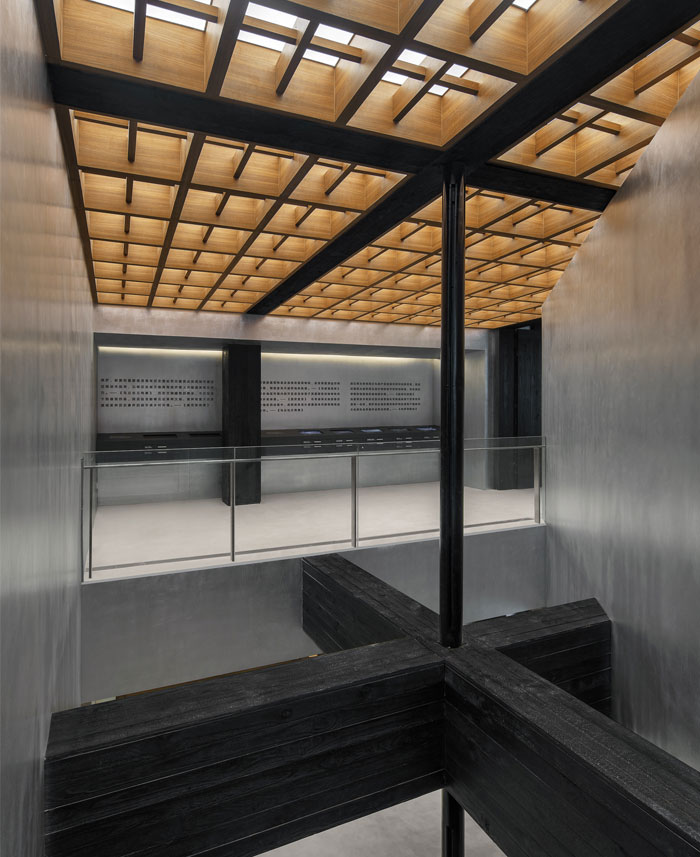 The traditional material silver foil was not applied to large areas of the space. Instead, it was attached to wooden veneers to form an updated version of “silver foil” that features wood grain. It neutralizes the sense of solemnity and rationality generated by charred wood and the orderly matrix of the ceiling, while also adding a soft and warm touch to the entire space. 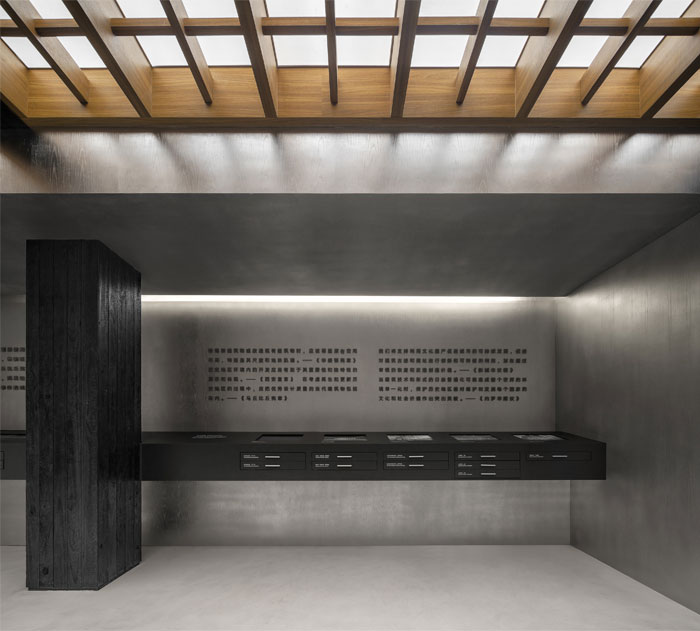 Apart from functioning as a unique circulation, the corridor also pays attention to the connection to landscape and natural light, to form a natural exhibition space. Natural light that filters in the atrium via the grid skylight reveals the layering of the space, and produce openness and rich visual changes, which echoes the spatial effects of classical Lingnan gardens with modern design languages. The landscape and exhibition in the space coexist with light and shadows from the ceiling, hence providing varying and rich spatial experiences.
The visiting route extends along the corridor, and shows an undulating form based on the vertical relationship of the two floors. Considering that the long and narrow passage restricts the field of view, Various Associates set a grille skylight, which brightens the area and obtains the integration of solidness and void. The double-height area then suddenly opens up the view, which forms a contrast with the narrow passage, together enhancing the sense of layering and playfulness of the space. 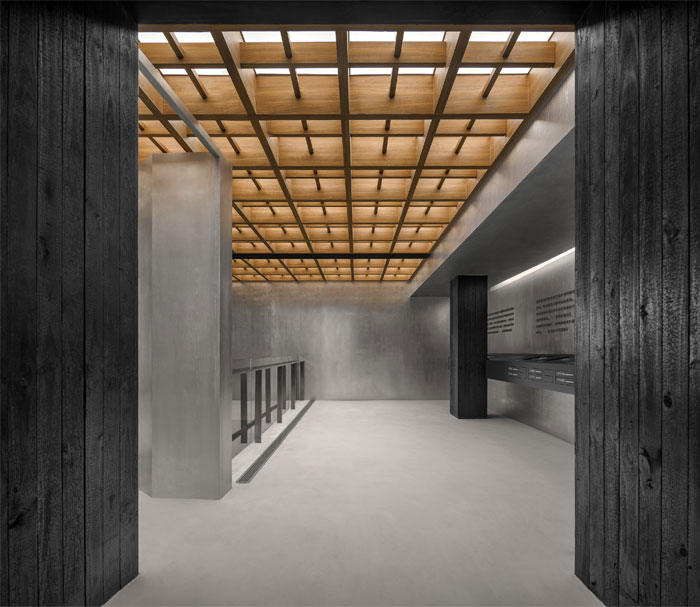 Twisting circulation, unique triangular space finished with silver foil, and the skylight featuring wooden grid, are unique symbols of the space. Parts of interior surfaces are composed of translucent glass bricks, which reveal outdoor hues indistinctly and help unify the spatial languages via the rational cross patterns.
Functional spaces for shared coffee, exhibition, leisure and meeting are orderly configured and linked up by corridors and passages. Matrix-featured spatial order is interpenetrated and combined, and the wooden grille skylight echoes the form of atrium. In addition, the cross-shaped structures and the slanting wall break the overall restrained spatial tone via the asymmetrical arrangement, which resonates with the freely extending street-and-lane-style layout of this space — a mixture of village and city. 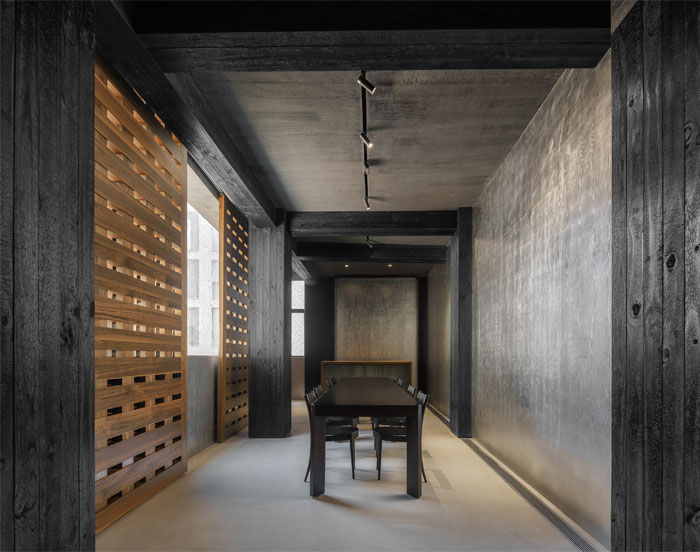 Various Associates enriched the circulation routes through structural interventions, endowed the project with its own identity via materials and details, and paid attention to cultural context and demands behind the project as always. The studio sees the renovation of Nantou Ancient Town as an attempt to activate the community based on contemporary context, and to transform local culture for more than a thousand years into a popular upgraded landmark. In this project, one of the key points that the design team focused on was to update the “sense of age” and “simple image” of traditional materials by design approaches. As the studio always tries to bring forth the new through the old, and seeks for modern expression of the traditional. 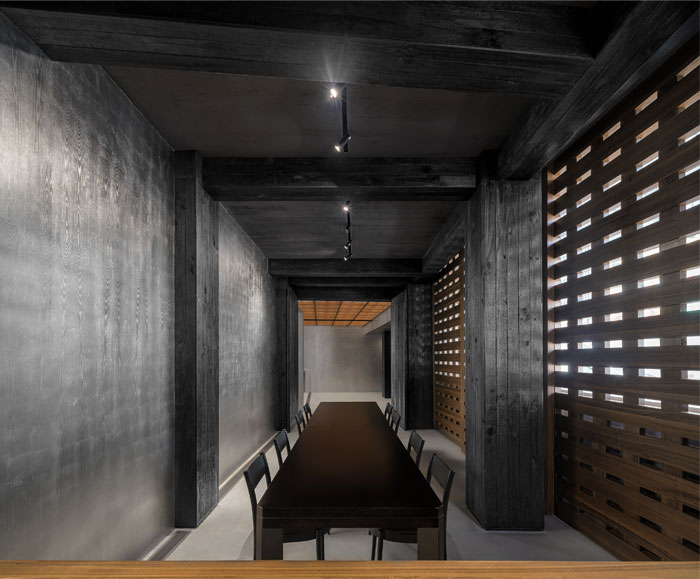 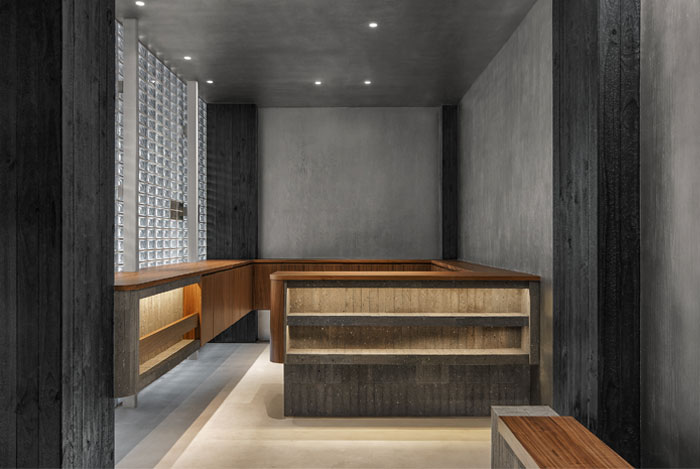 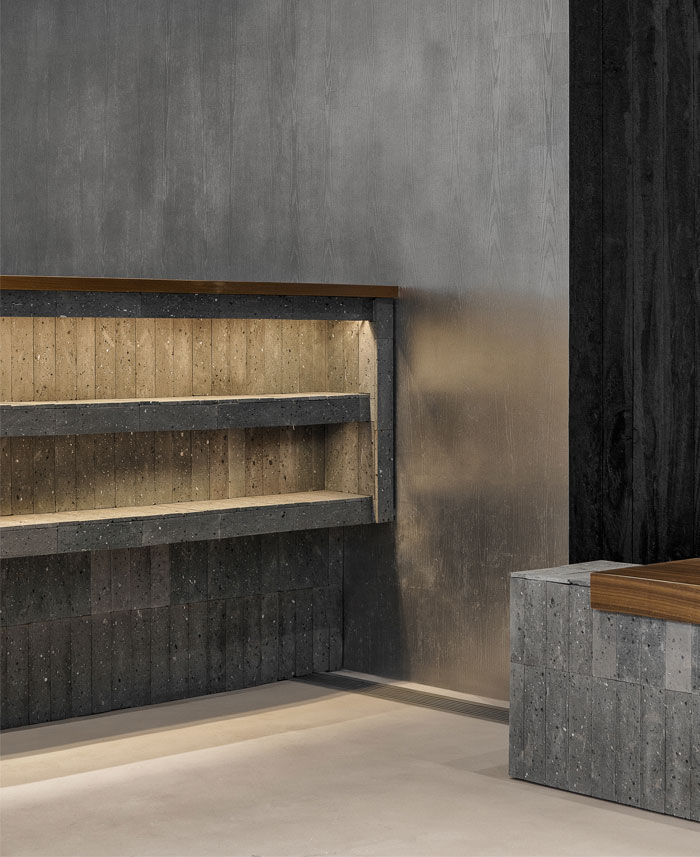 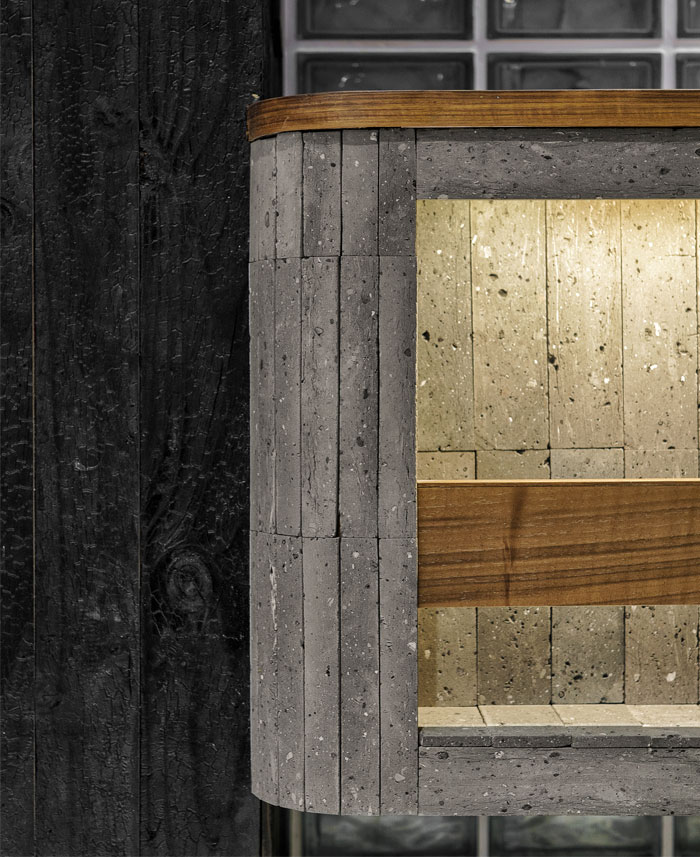