Located in Fano, a city in Marche region, the winery configures itself as a graft inside the spaces of Palazzo Tomani-Borgogelli. The 16th century building, owned by the patrician family Tomani, later Borgogelli from the early 1900s, is part of the urban façade overlooking Piazza Costanzi and Via Garibaldi; traces of the Roman colony organized by parallel cardines. The two streets, together with Vicolo Tomani, are the limits of the urban block defined by the architectural body. 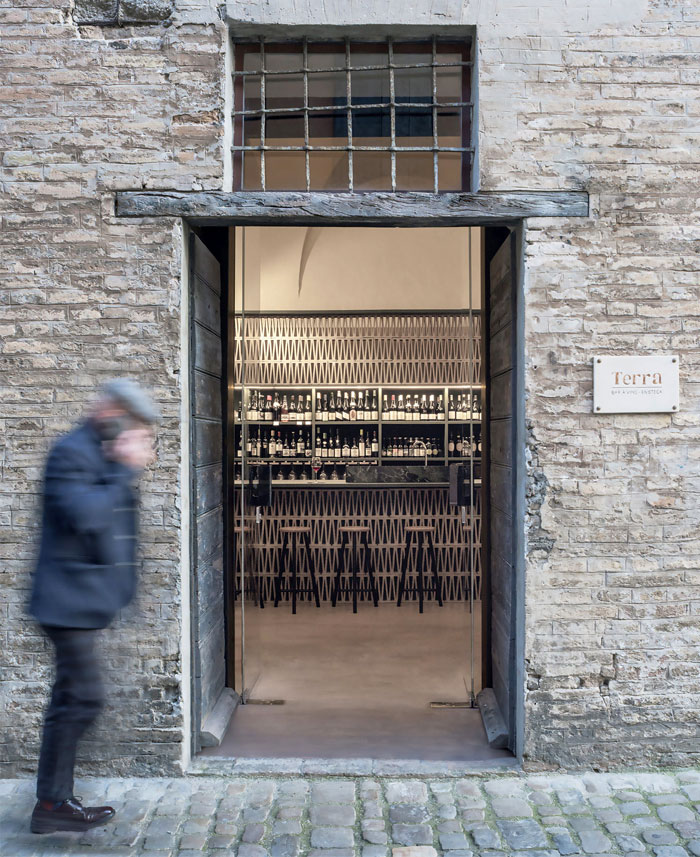 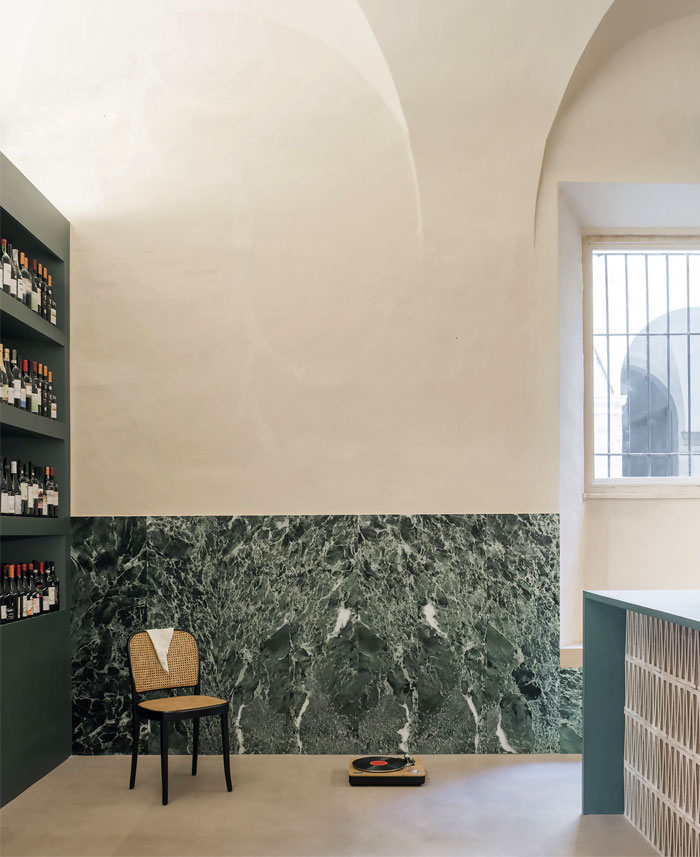 Palazzo Borgogelli, with its long planimetric shape, is the result of the addition of two buildings: a first one dating back to the 16th century, containing the cloister and the staircase with opposite ramps, and a second one from a later period ending in a new courtyard. If the main façade of Piazza Costanzi, designed in the nineteenth century by the architect Arcangelo Innocenzi from Fano, appears covered with a pink colored terracotta skin, the two other sides are instead characterized by bare bricks. It is precisely on this nakedness that the windows of the winery that overlooks Via Garibaldi are cut out. 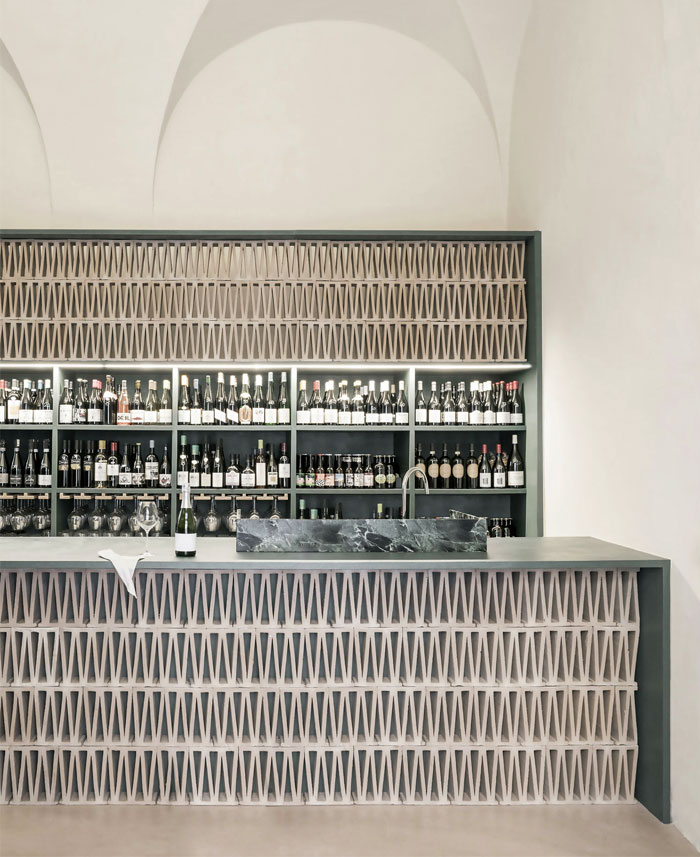 The two worn doors (restored only in the hinges), the oxidized wrought iron grids, the imperfections of the plaster left inside, testify to the time that the project wants to reveal. Once through the new glass window, the two vaulted rooms were repainted and plastered locally, following the chromatism already present on the walls. These last, together with the floor, are just neutral surfaces capable of accommodating the new interior. 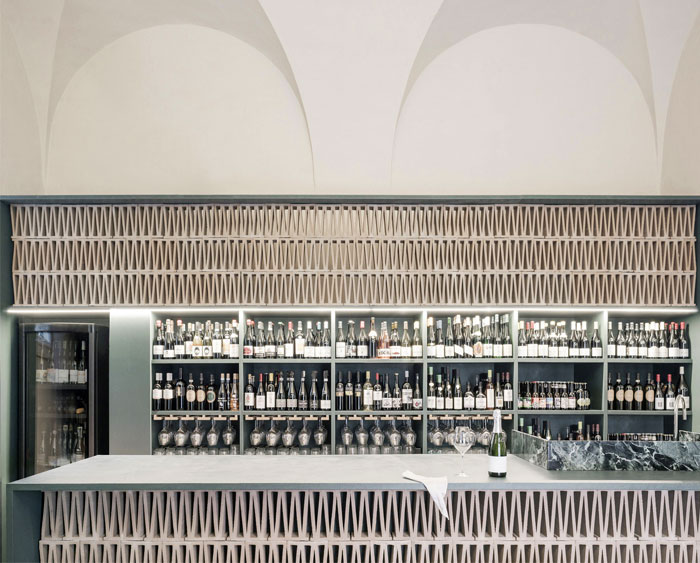 Three natural materials and one color design the interior space of the winery: the oak of the tables and the seat, the Alpine marble of the walls, the terracotta of the decoration and the green of the wooden part, the plasterwork and the plasterboard works. These last were necessary to build, complying with the criteria of reversibility of the protected building, the new volume of toilets which also follows the traces of a probable pre- existence. 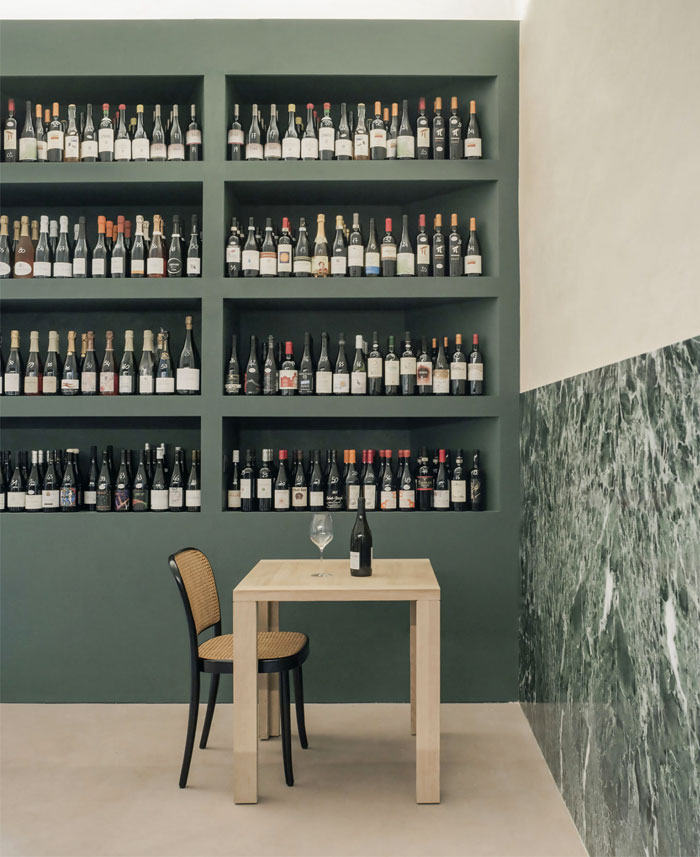 If the planimetric signs, that conform the interior of the first vaulted room, consist in the counter and the wine cellar in the background (both characterized by the decoration of hand-drawn terracotta tiles), the signs of the second are the volume of the toilet and the hidden storages. Both spaces have in common the wine cellars that incorporate the two glass portions of the street’s elevations, whose voids are configured as subtractions of a volume. Photos by Lorenzo Zandri; 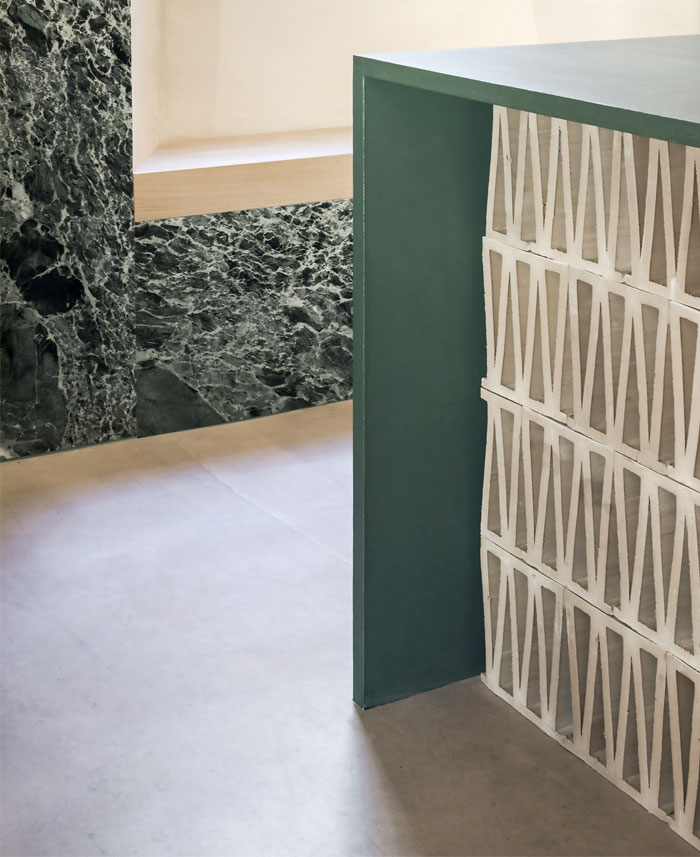