The beach house of Auckland designer Dean Poole and his family is nestled among the dense native bushland of the Waitakere Ranges, emerging from the vertical terrain to sit among the treetops. Designed by Stevens Lawson Architects, the house rejoices in a sense of isolation, tucked away in the wilderness. 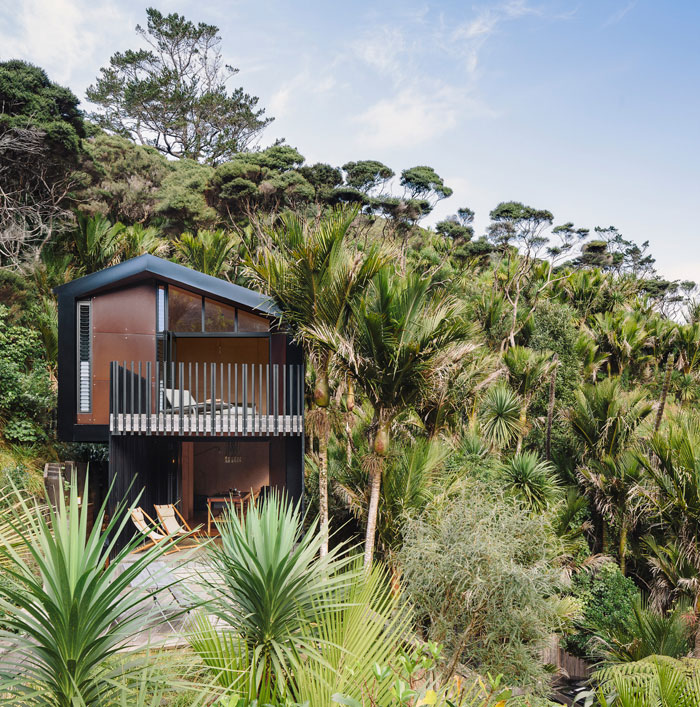 Taking such joy in simplicity, Karekare is deeply connected to the natural environment in which it rests lightly. Celebrating its sense of isolation from human intervention, the project fulfils its mission to create a quintessentially New Zealand experience of both landscape and habitation. 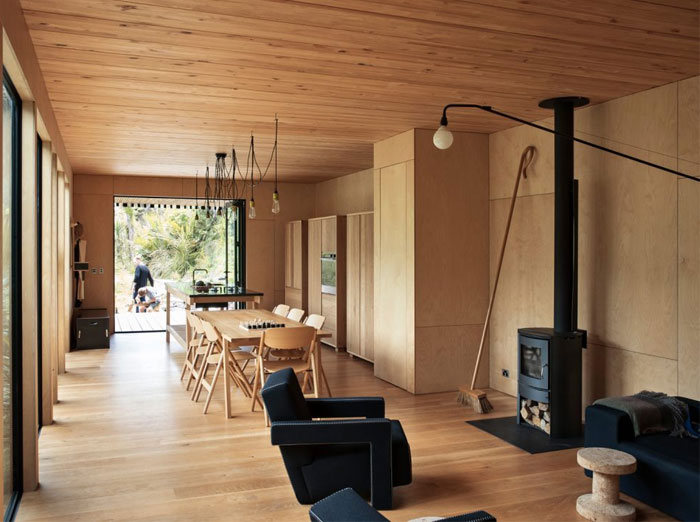 A desire to connect with the natural landscape and provide an “authentic New Zealand experience” for their children drew Dean Poole and Kristen Dudson to the slice of land on the hillside, which they purchased in 2011. 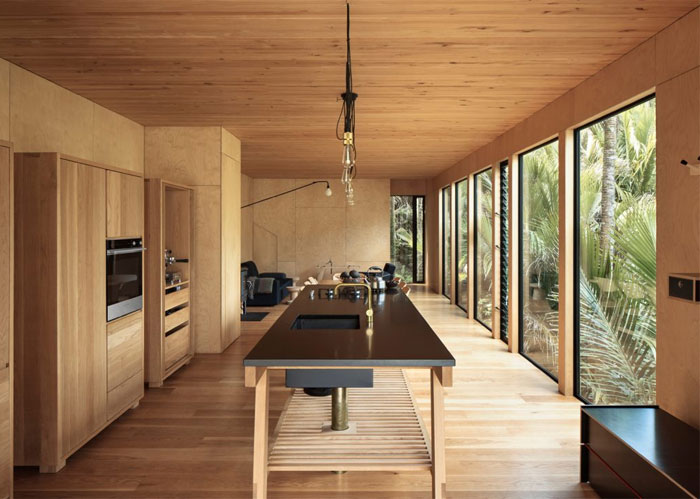 This interstitial space allows for a relatively unmediated connection with the natural environment, but as one moves inside, the experience becomes one of protection. While the steel-clad exterior harks back to a simple hut, the refined timber interior speaks to the project’s finesse. With birch-ply walls and oak flooring and joinery, the interior is pared-back, even minimalist in its simplicity, yet the impact of the sheer scale of the timber creates an immersive interior environment. 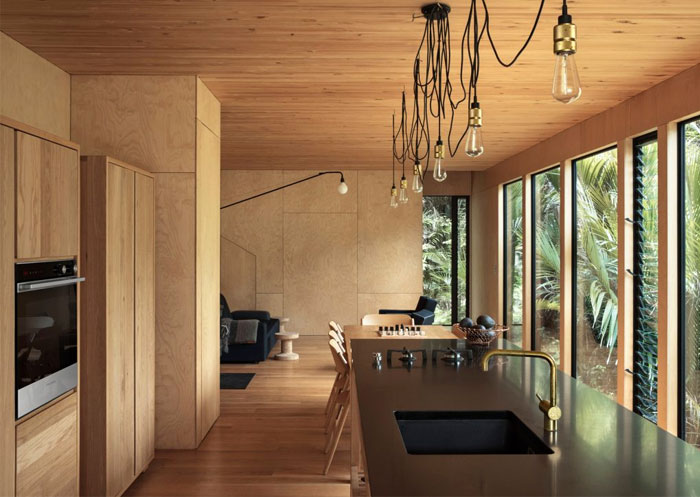 The entire lower level is devoted to an open kitchen, living and dining space in which the family can enjoy spending time together. To complement the architecture’s studied simplicity, Dean designed the kitchen himself. Having worked with Fisher & Paykel over many years in his role as creative director with the Auckland-based design studio Alt Group, Dean was well versed in contemporary kitchen design, which he combined with his strong belief that the kitchen needed to feel more like an ‘object’ than a kitchen.

Approaching the kitchen as a workshop, with no unnecessary elements, each aspect of the design is fulfilled to meet its specific need and no more, exemplifying an ‘enough is enough’ design ethos. Much of the family’s cooking is completed on the barbeque outside, which also informed the simplicity of the kitchen. Dean conceived of the kitchen as separate pieces, akin to furniture, resulting in three freestanding timber cabinets that rest against the wall, housing the fridge, oven and dishwasher. An island bench sits as another object within the space, the open timber form resembling a construction sawhorse. words: Rose Onans; the local project.com.au; 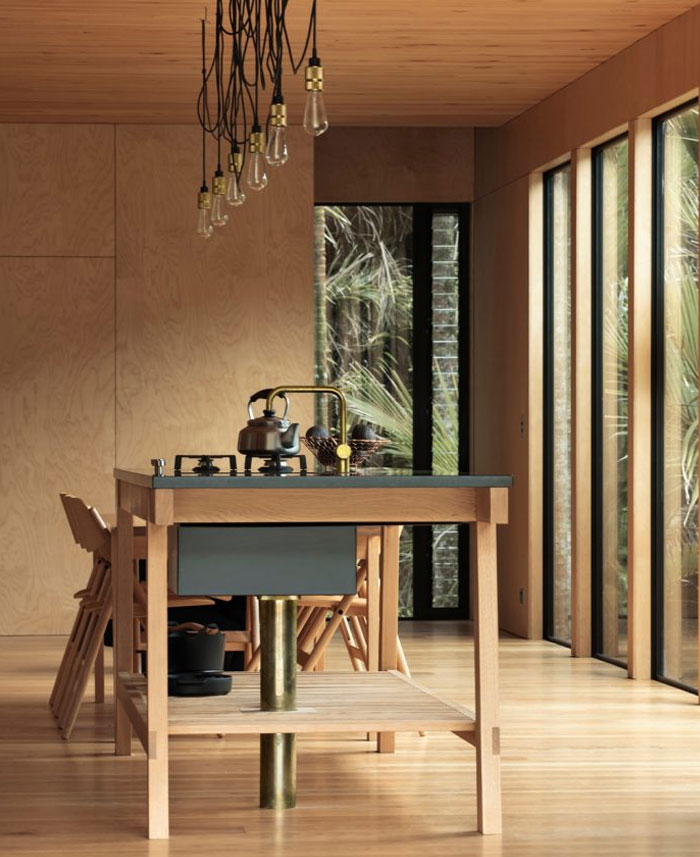 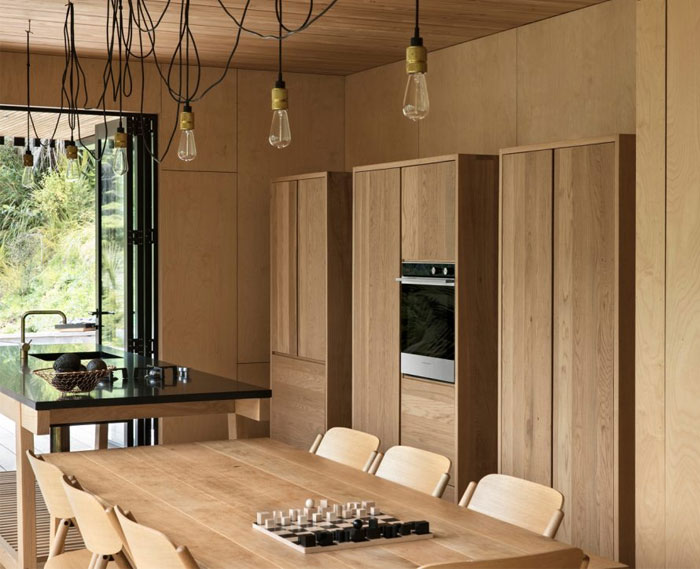