The Brick Vault House is a prototype for suburban house construction that integrates industrialised construction methods with traditional craftsmanship in Valencia, Spain. It is designed by Space Popular in response to a commission from a local developer, and in collaboration with Estudio Alberto Burgos and Javier Cortinal Maruenda. 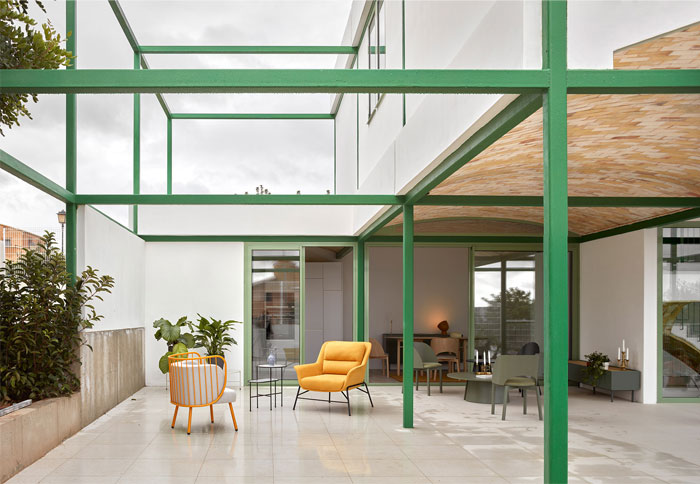 The driving design principles of the Brick Vault House respond to regionally available construction techniques – both traditional and contemporary – and the Spanish Mediterranean climate. It is organised around a structural grid system, which allowed us to resolve the typical construction details so that future houses could have different configurations, avoiding replication but still maintaining some level of standardisation. The character of the house is given by its structural materials –the green steel frame and exposed load-bearing brick vaults present throughout all spaces, and its irregular modular layout –creating numerous porches and terraces as well as varying views. The house responds to its context by adopting local construction methods both old and new. 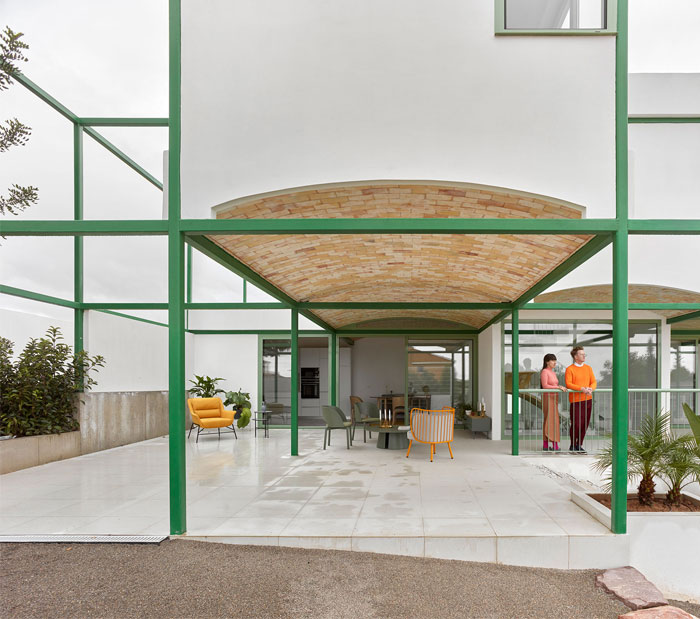 This instance of Brick Vault House is built on a sloped plot, which allowed us to create an experiential sequence through which the scale and features of the house are revealed progressively. As you enter what looks like a half-sunken two storey house, you are directed towards the entrance of the house which is also the circulation core where you find the staircase. Around it, the different spaces are organised without the need for corridors. The shifting floor plates create a rich sequence of viewpoints, and therefore areas with the very distinct visual character within the modular system. Having a variety of spatial qualities and views around which to structure your daily life is something we strive for. The place where you sit in the morning for breakfast could have a different feel to where you spend your afternoon, and your summer and winter routines could make use of spaces differently configured.

The structure of the house consists of a green steel space-frame filled with exposed load-bearing brick vaults and white drywall facades. 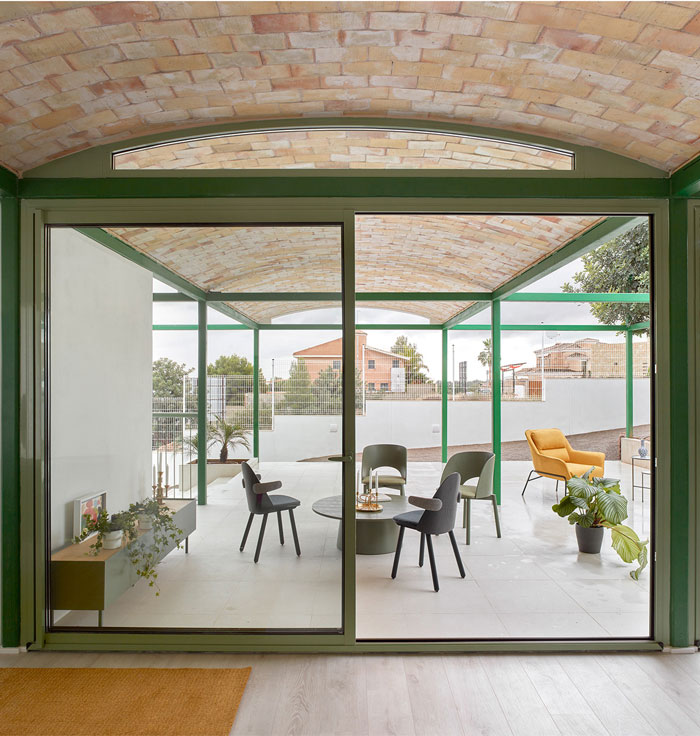 The steel space-frame –100x100mm square tube– follows a grid of 375x375cm in plan and 316cm height, which we found to be most appropriate for domestic spaces and local planning constraints and defines the overall volume of the building. The steel structure was put up on site in a matter of days with just a scissor lift, no cranes or scaffolding needed. Once completed, the brick craftsmen could use it as the scaffolding. The brick vaults are load bearing and float over the steel structure, being detached from it so that each material can settle at its own pace. 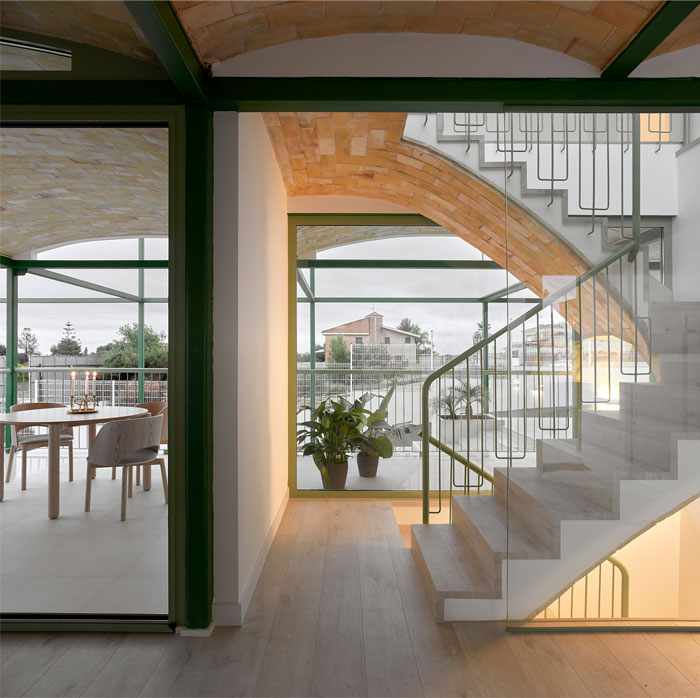 This type of brick vault, which dates back to the 13th century and was popularised by Rafael Guastavino in the 19th century, requires no formwork. Instead, it relies on the recipe of the gesso so that each brick is bonded in place instantly without any additional support. Although there are faster and more efficient slab construction methods today, we chose this system for its combination of environmental materials and the promotion of skilled hand-craft on site. 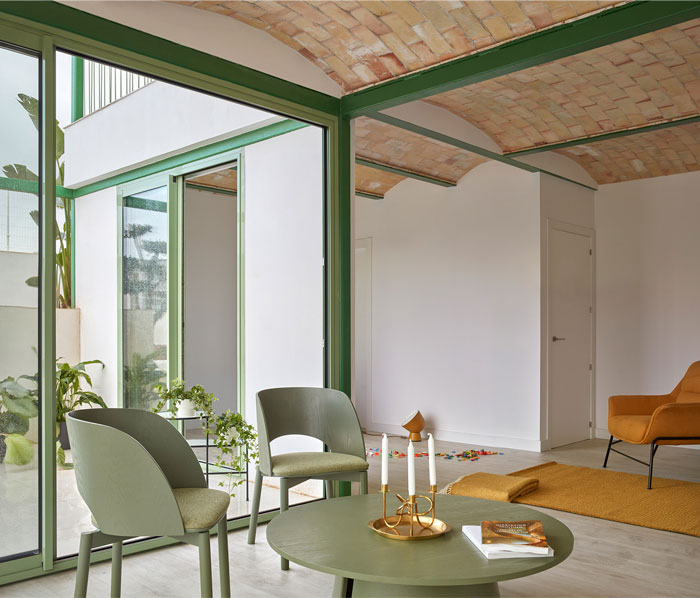 Within the grid, only some modules are filled, creating generous covered outdoor areas that allow for energy-efficient large windows that let the sun in during winter and are shaded during the summer. This provides seamless indoor-outdoor living, which we consider an opportunity not to be missed when designing for mild climates. The grid is also a unifying element throughout the house. We think one feels more at ease living in spaces where the way it all comes together can be easily discerned. The green blends with the vegetation, it is balanced against the shifting hues of the sky, and it is a colour often found in domestic interiors in small amounts through indoor plants. The load-bearing brick vaults become the main interior feature, giving a sense of expansion and lightness, as well as warmth. 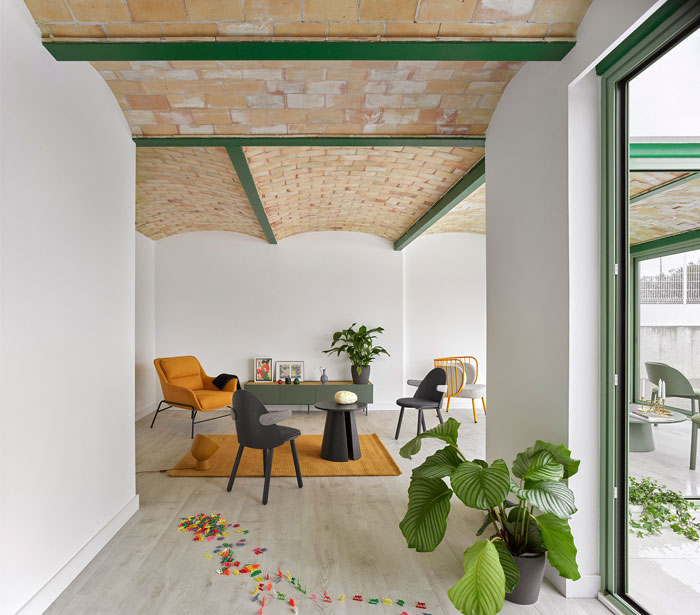 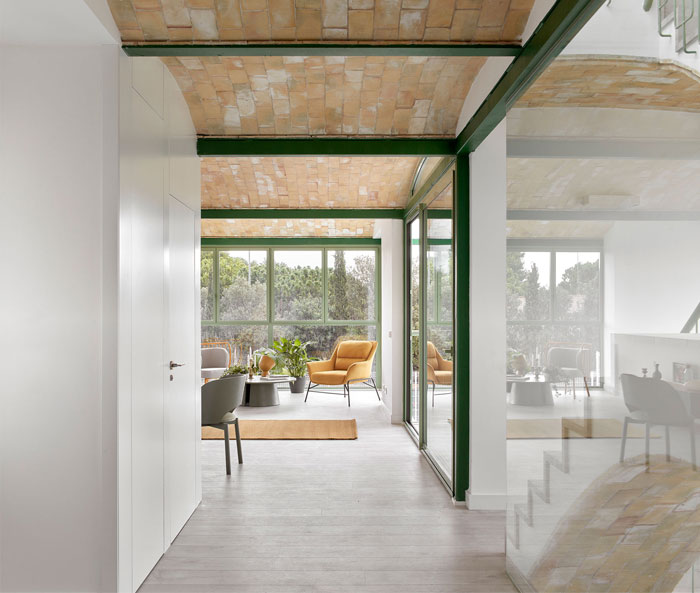 The remaining finishes are basic and affordable, providing a neutral canvas over which each tenant can overlay their preferred style and make themselves at home. In this way, The Brick Vault House achieves a balance between giving character to a house and still leaving enough room for personal customisation. We tried to portray a version of a lived house in the photographs – by Mariela Apollonio – by bringing in furniture – kindly lent to us by Teulat – but we look forward to seeing the house transformed by its occupants, in fact, we think it will only be complete and at its best then. 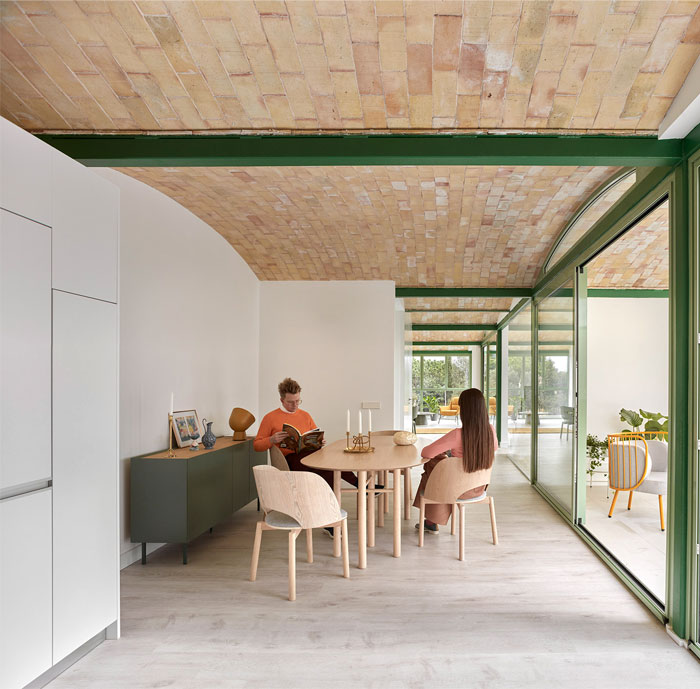