Home is not merely a house or container of trivial things in daily life, but more a place that accommodates emotions and love. It’s like an intimate medium, which witnesses the interweaving of daily life and growth, records stories occur in the space, and conveys the occupant’s personality and attitude. This project is the transformation of a residence. Based on architectural thinking, the interior design enriches the layering of space by integrating interpenetrating surfaces, and realizes symbiosis between people and space in a free and balanced atmosphere. Natural light is what the clients expect most for the home. It’s a luxury to have sunlight change, stay and move throughout the entire space. As approaching the project, the design team tried the best to bring in the “luxury” daylight. 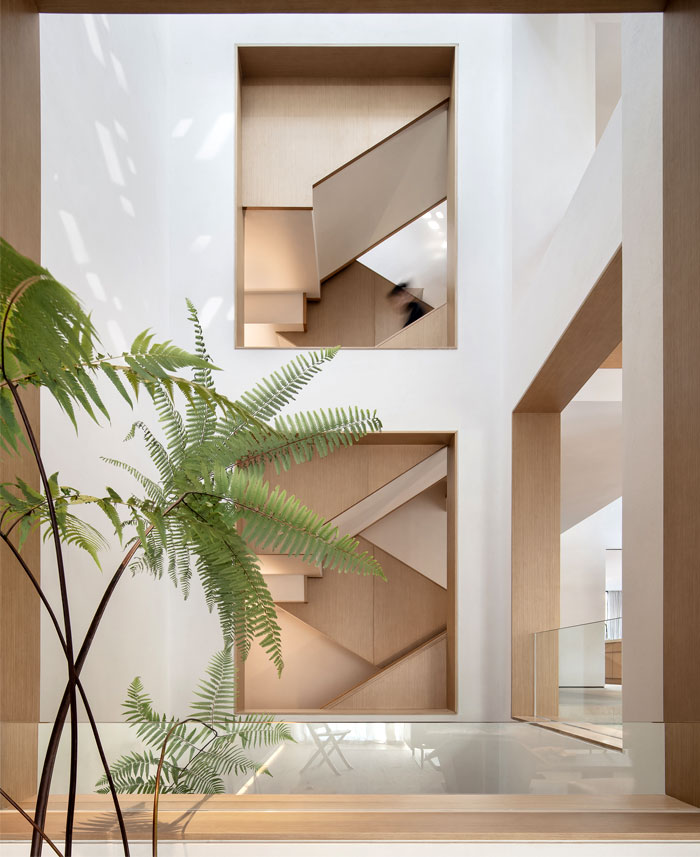 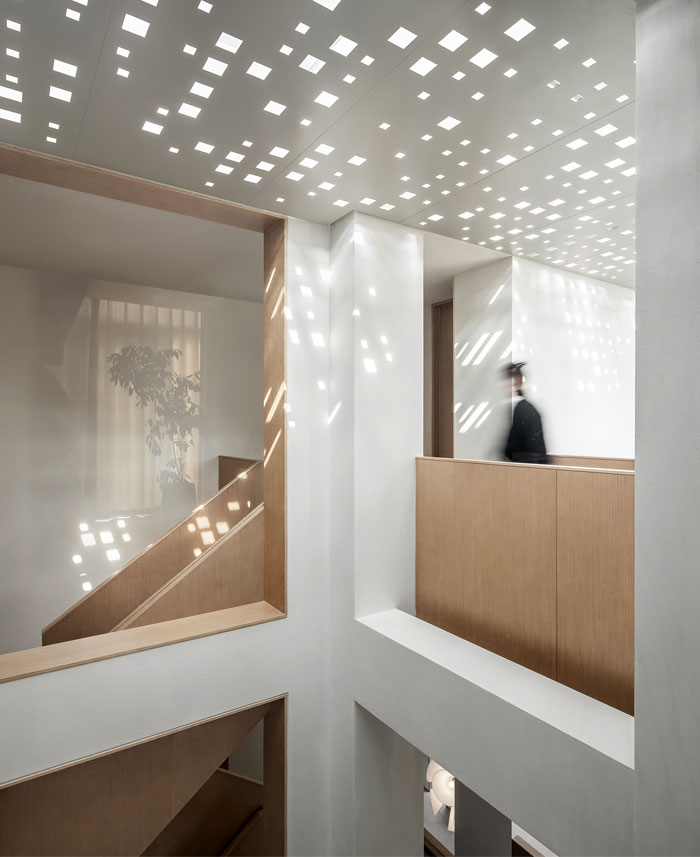 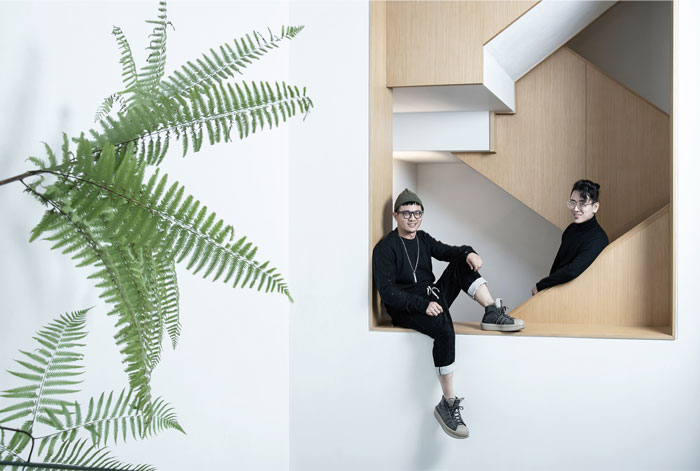 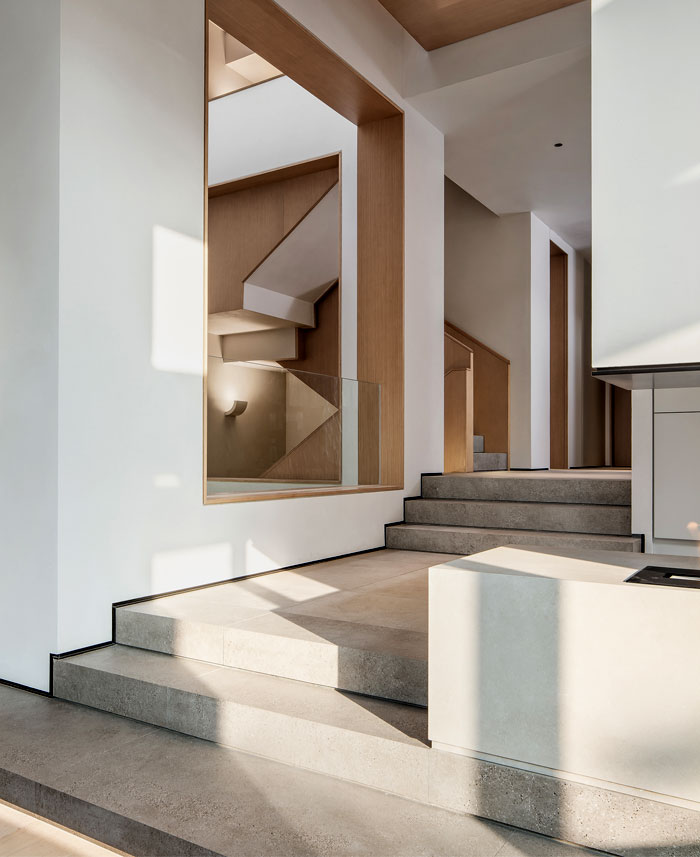 Deconstruction
Lina Bo Bardi once said that architecture was about creation and reinvention, so is space. The design team believes that the space is formed by objects, so objects are the basis of spatial functions and layering, as well as the carrier of circulation routes. Architectural thinking was applied to spatial transformation. The floor slabs and rooftop along the central axis of the foyer was dismantled, which divided the building into two parts: the front and rear blocks. A structural beam above the foyer was retained, which witnessed renewal of the space and carries its past memories. The box beside the beam features a mirror surface, which reflects it and seems to blur the time order under the relationship between the old and new. 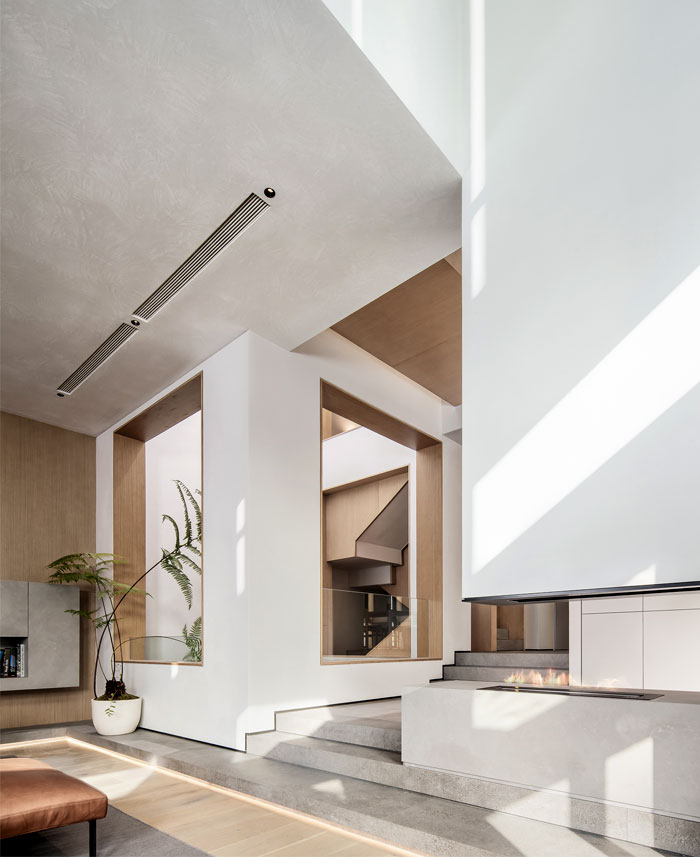 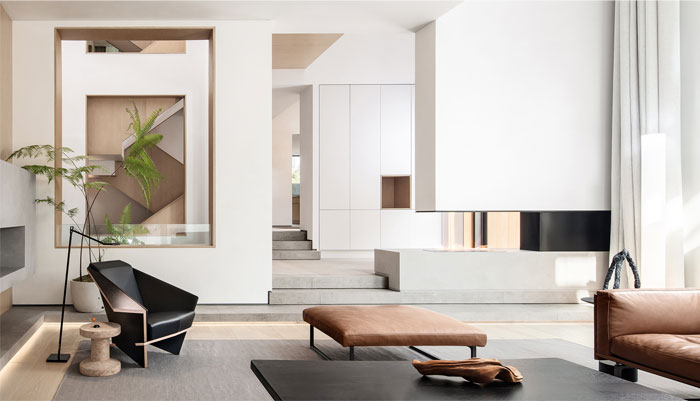 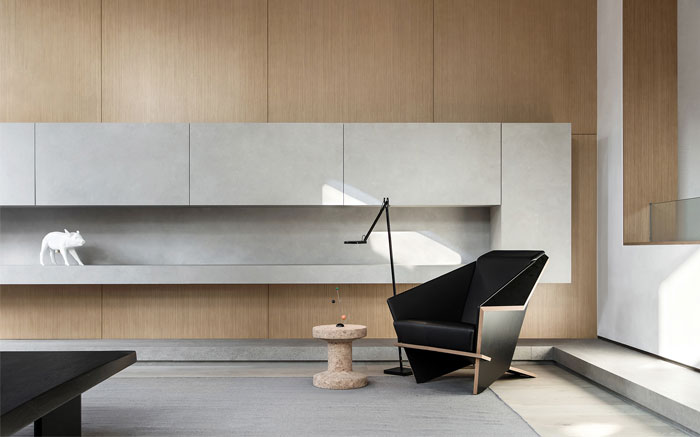 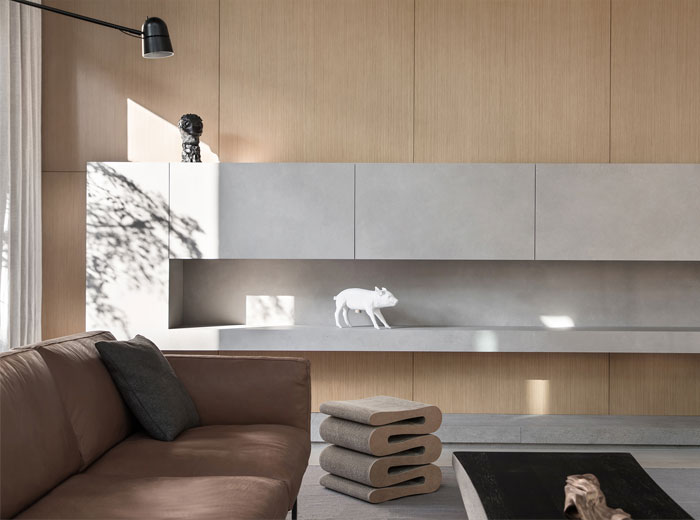 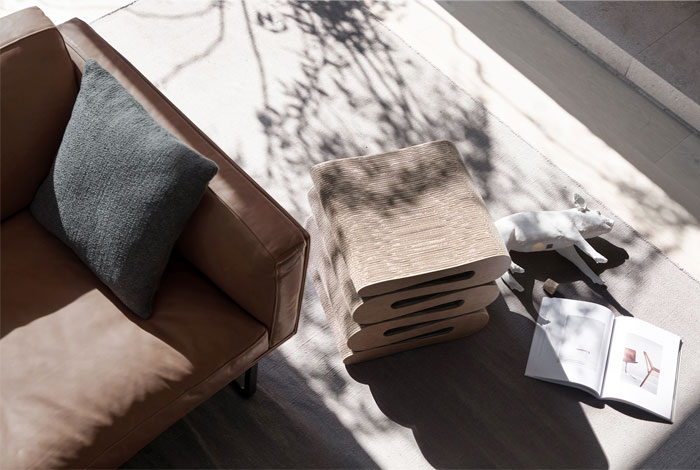 Interplay of Light and Shadows
Natural light expresses spatial art, and comforts the mind. The designers created an atrium in the building, in order to let sunlight directly filter into the central hollow space on each floor. Originally, there were only two areas allowing daylight to enter the interior. Through adding a new architectural block, the design team created an additional core area that introduces light in. Besides, a layer of perforated aluminum panel is set under the glass roof, which creates a sense of formality as light falling down. The angles of sunlight vary throughout the day and year. Light freely moves within the space, generates dappled shadows, which interact with different areas and provide the occupants with surprising and playful experiences. 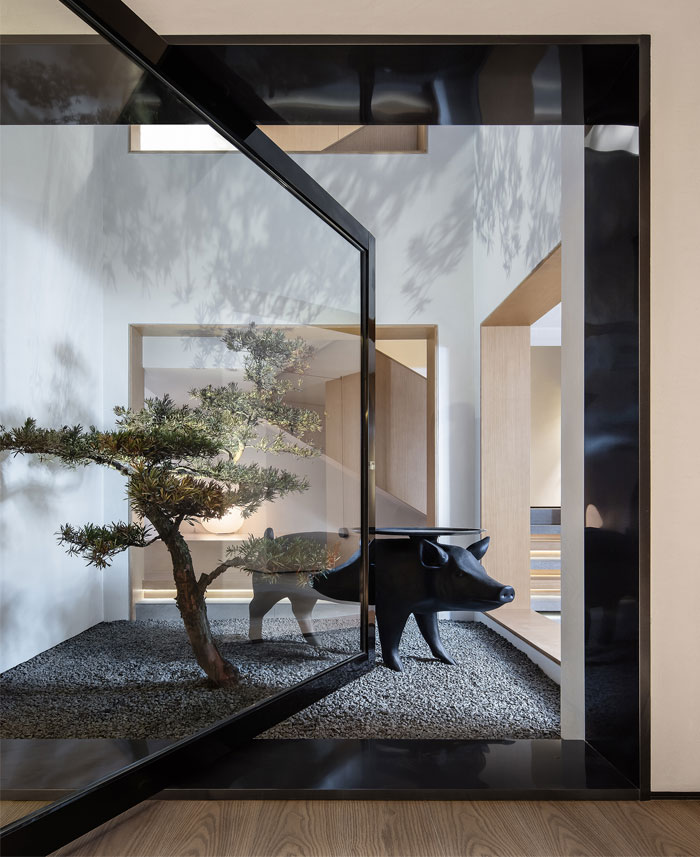 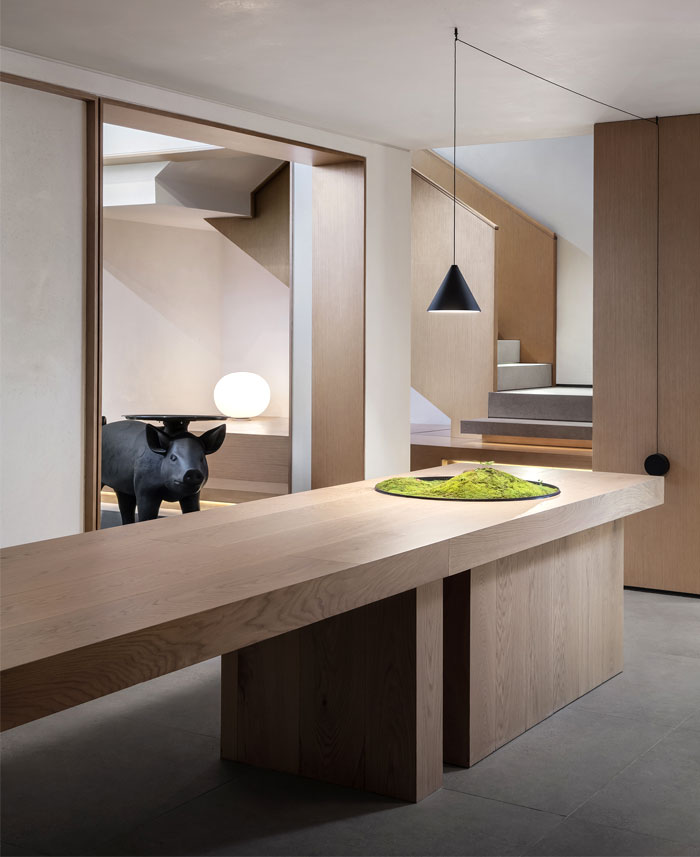 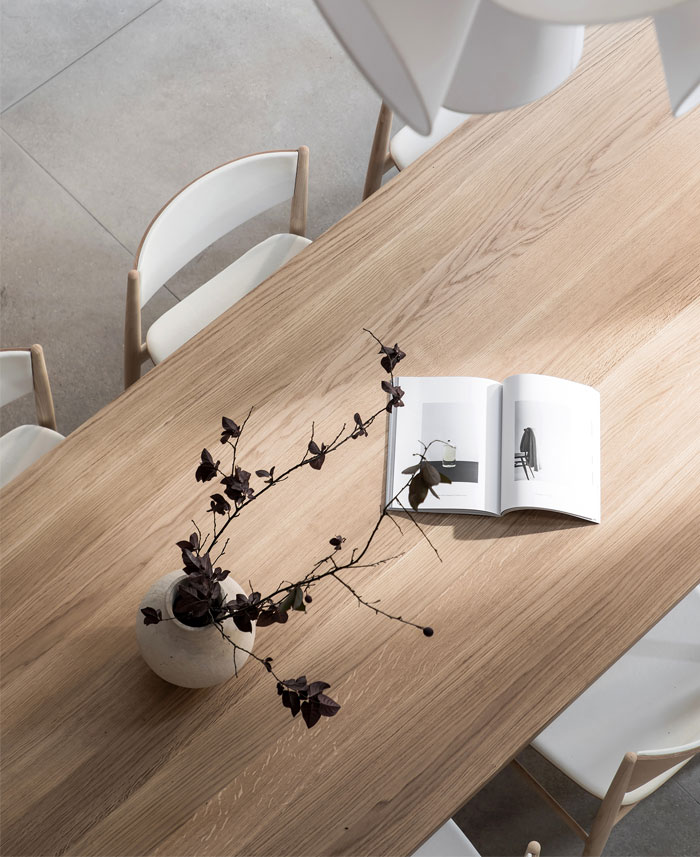 Interactive Connection
After understanding the clients’ demands and living habits of the family, the designers further enhanced openness and interactive feature of the residence. Parts of the ceiling above the living room and dining area were cut, in order to connect the public areas as much as possible.
In addition, based on spatial functions and the clients’ expectations, the designers added some windows in an orderly manner, which perfectly coordinate with the scales of those already existed. These new window openings bring ample natural light into the space, and enhance interaction between the inside and outside. The kitchen, dining room and other public areas are awash with daylight since morning. Those public areas are made open, helps to facilitating physical and spiritual interaction among family members.
Conventional independent walk-in closet cannot be found in the bedroom. Instead, the wardrobe is set between the bedroom and bathroom, surrounded by the circulation routes. The bathtub can be seen from the bed area. Such a smooth sight line helps to adjust emotions, relax the mind, and bring more possibilities for life. 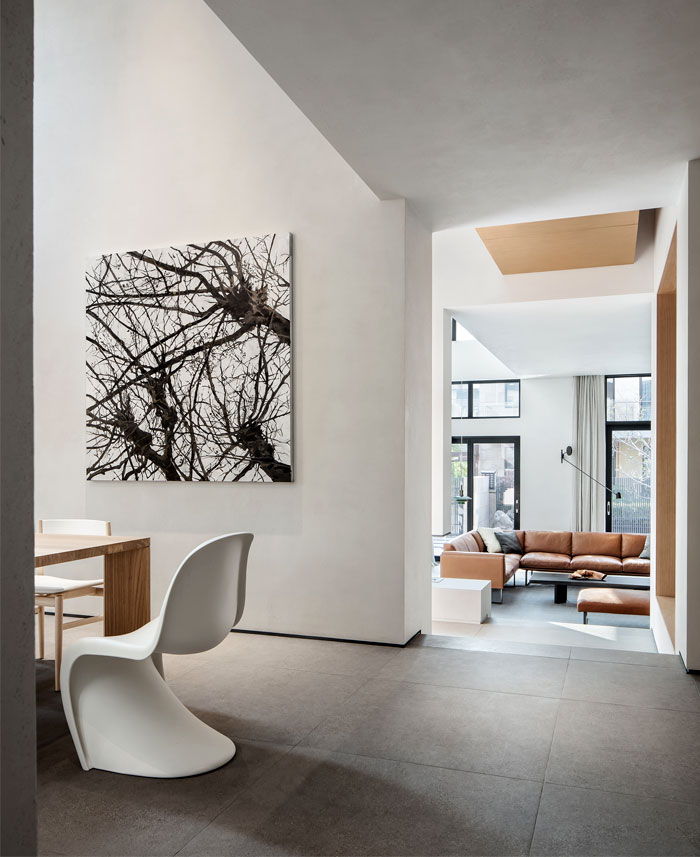 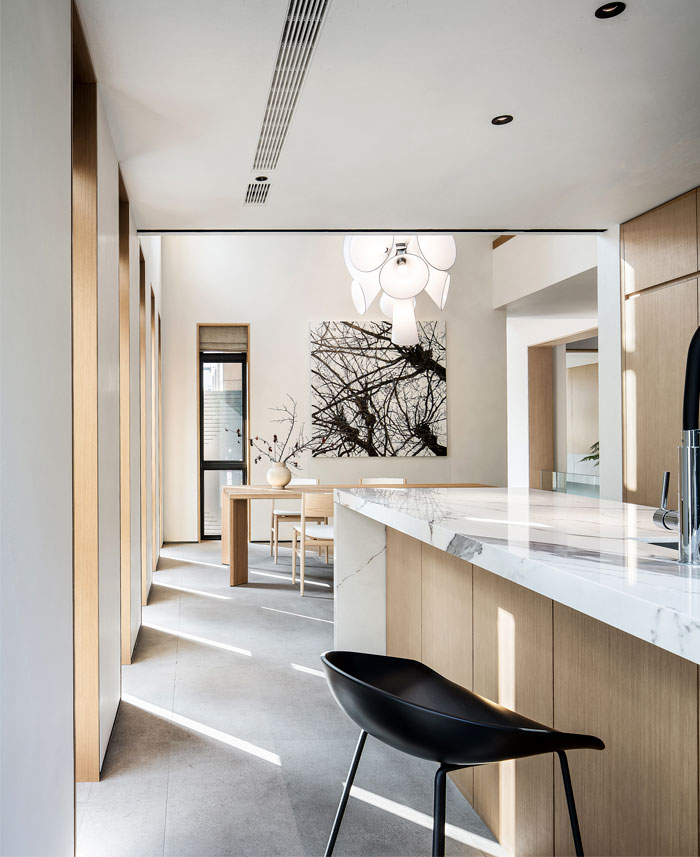 Design Thinking
The spatial layout is based on rational thinking, which takes into account functionality, the family’s living habits, and interaction among people, space and daylight. The architectural facade and interior structures were adjusted and transformed appropriately, so as to create visual experiences and affect the occupants’ emotions at architectural level firstly, and extend such experiences and emotions to the interior. The interior space is then presented in a way that well meets living needs and promotes interaction among family members. The overall design is capable of guiding and improving lifestyles. “The design languages are relatively simplistic. The space is serene, fun, durable and sometimes surprising, and it offers a holistic experience, which dialogues with the mind.” the designer said. 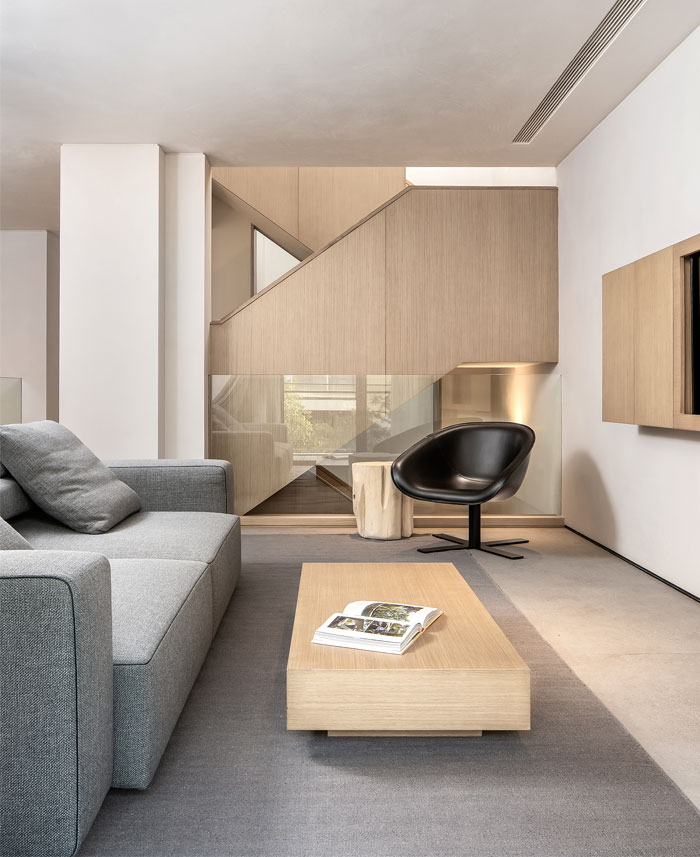 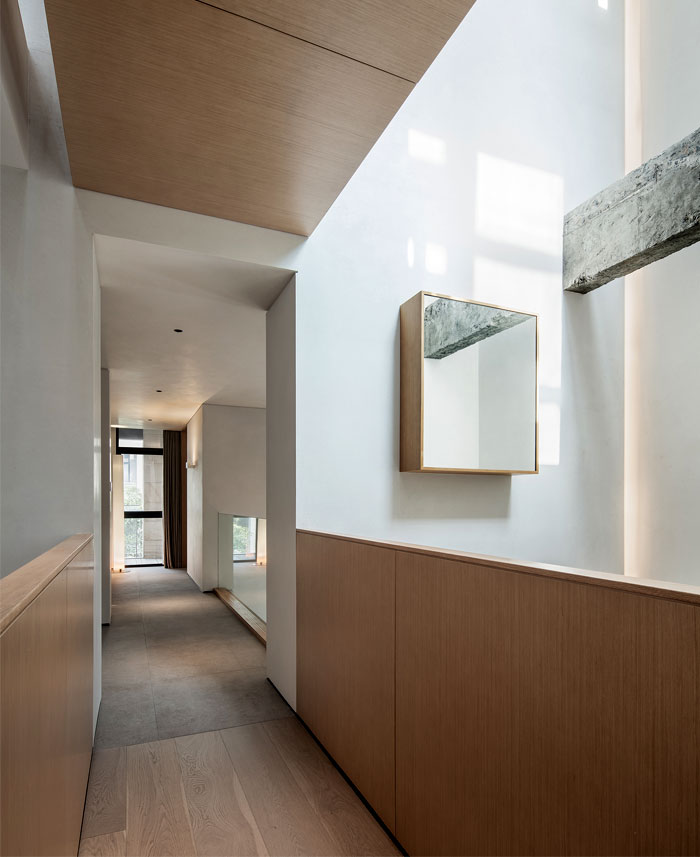 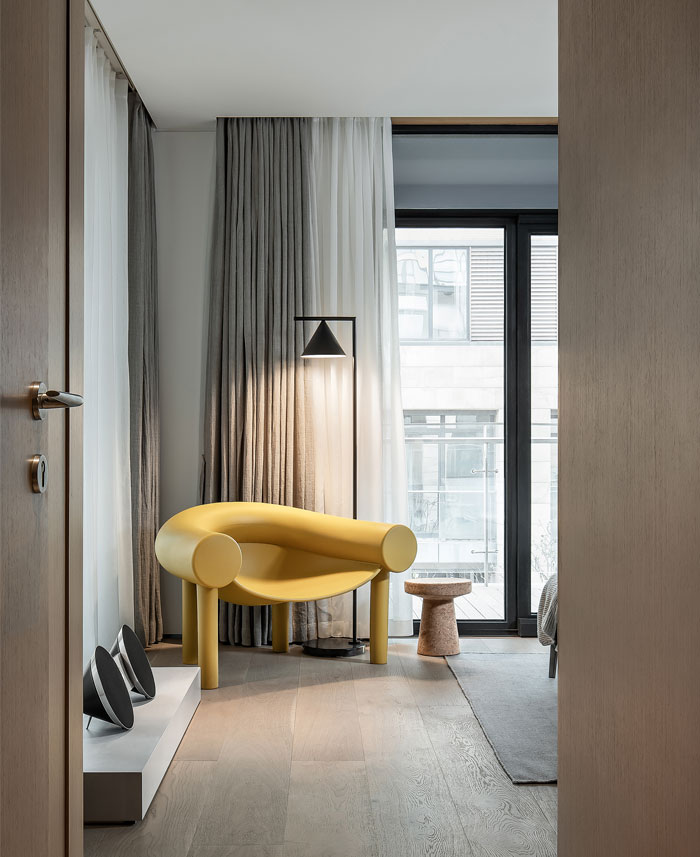 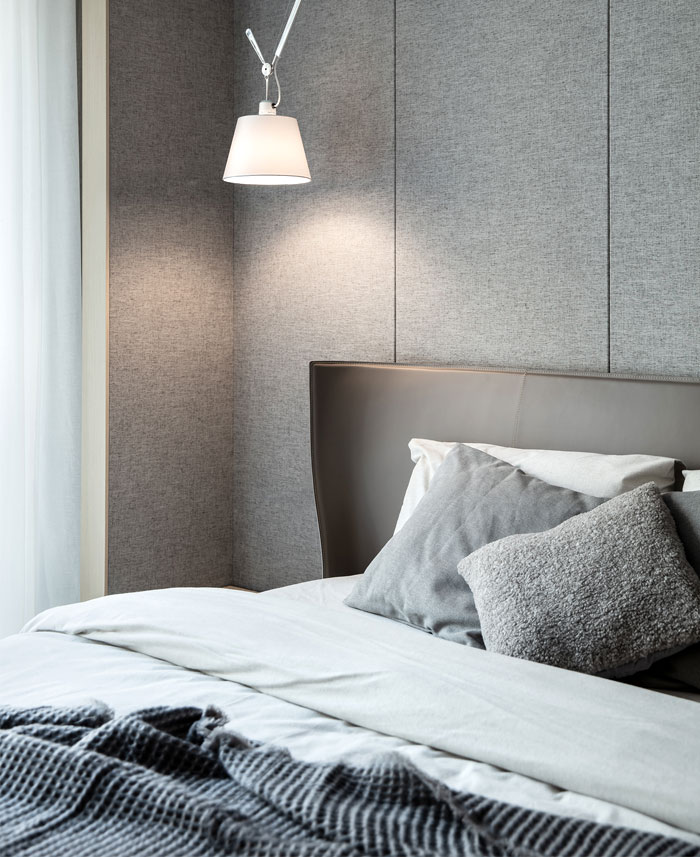 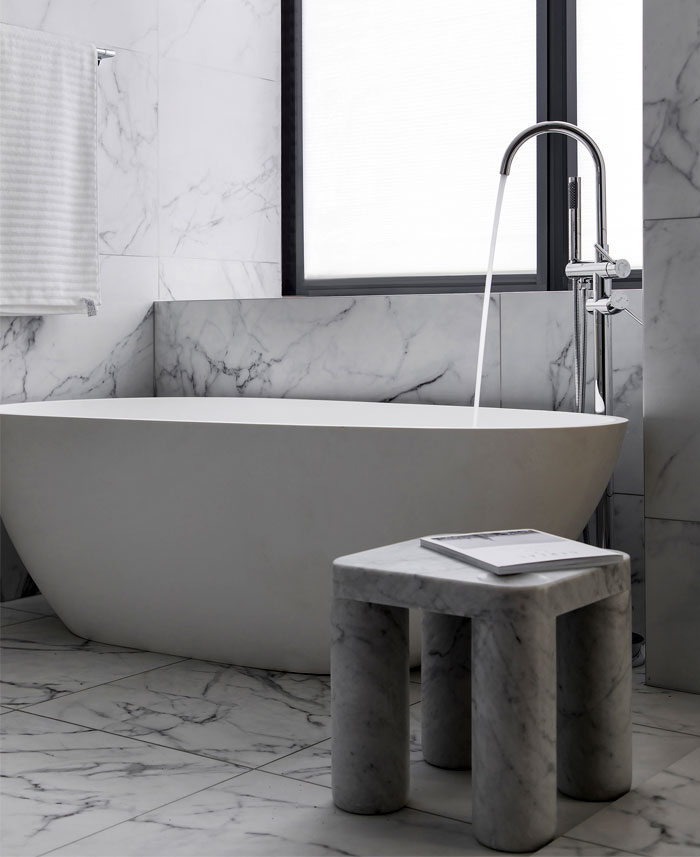