With this house, context, scale, materiality and function all come together to create an endlessly fascinating family home. The entry to this house on Sydney’s lower north shore is discreetly tucked away down a flight of steps and behind a gently curved sandstone wall. Look carefully and you will see the operable vertical slot window which allows anyone in the kitchen to see who is at the door. 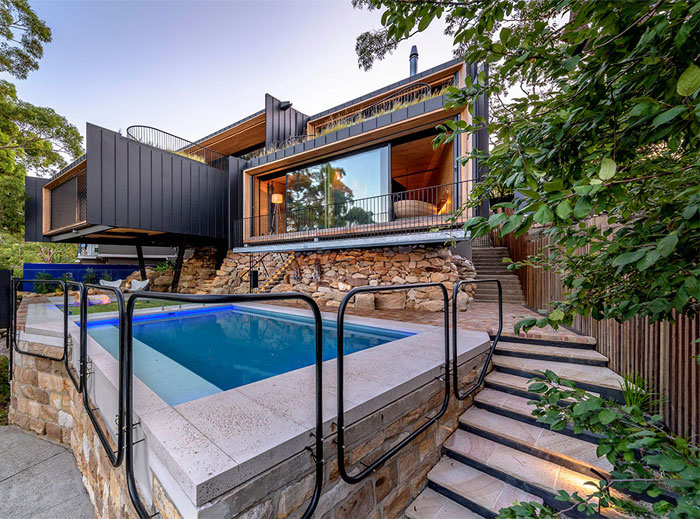 Once inside, the house opens up in a wonderland of fluid space, endless intriguing detailing, a celebration of timber and a clutch of edited and always different views out past a loose stand of Angophora trees and rocky outcrops to the magical Sugarloaf Bay, part of Sydney’s Middle Harbour. 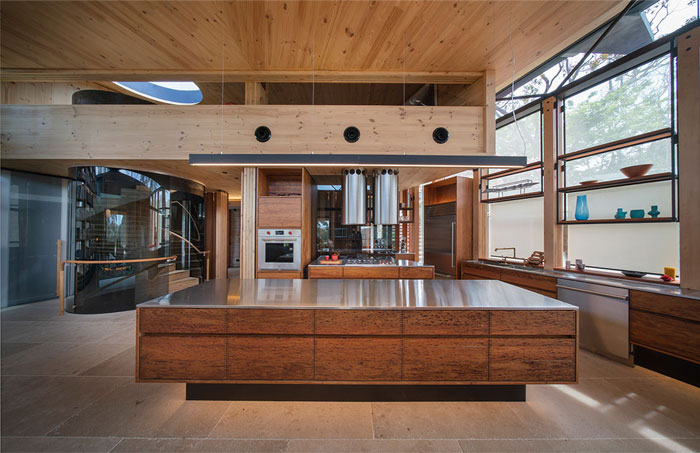 After walking through the four levels of the house (including the swimming pool terrace at the bottom from where the site extends even further down the ridge to include a tennis court and more bushland) I quip to architect, James Fitzpatrick, that this house requires a whole book, not just a short article. He agrees, if only because this house (designed for himself, his wife and two children) which he describes as a “forever” house, will constantly adapt to a changing family, epitomised by the seed pods of the surrounding Angophoras. 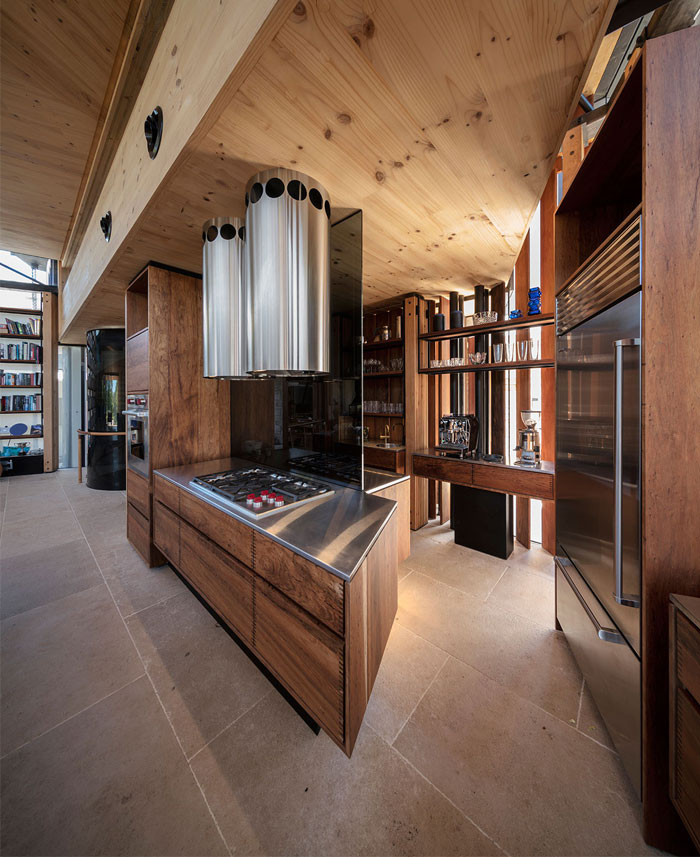 The trees are part of the context to which the house responds so strongly. In the suburb of Castlecrag, the site tracks down from the ridge towards the drowned river valley of Middle Harbour. It is inseparable from its landscape, not enjoying the fabulous views voyeuristically, but becoming one with the site. This is also a response to its architectural context because Castlecrag is home to the Mahoney/Burley Griffin legacy and its local application of Frank Lloyd Wright’s vision: the house as a shelter, borrowed landscape, use of local sandstone, prospect out to the landscape as well as internal prospect across a free collection of loosely defined functional spaces. 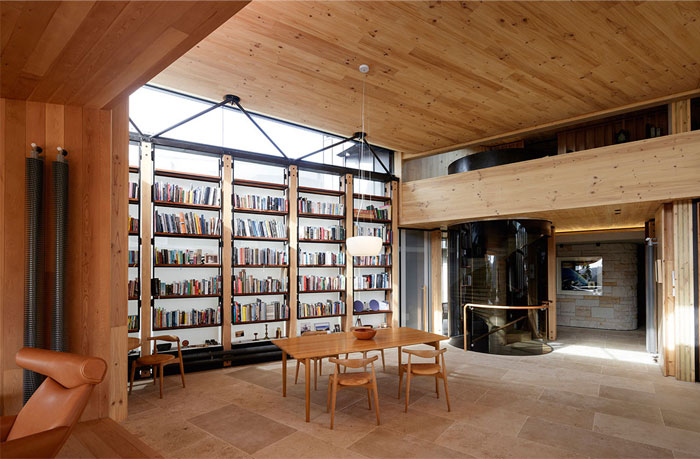 While the spaces – especially on the entry level (kitchen, dining, sitting rooms) – flow freely into one another, there are many spaces which reveal themselves only when one opens the flush, timber-battened doors, creating a sense of perpetual discovery. It is a home designed to accommodate the different existing needs of the family while also adapting over time as needs change. 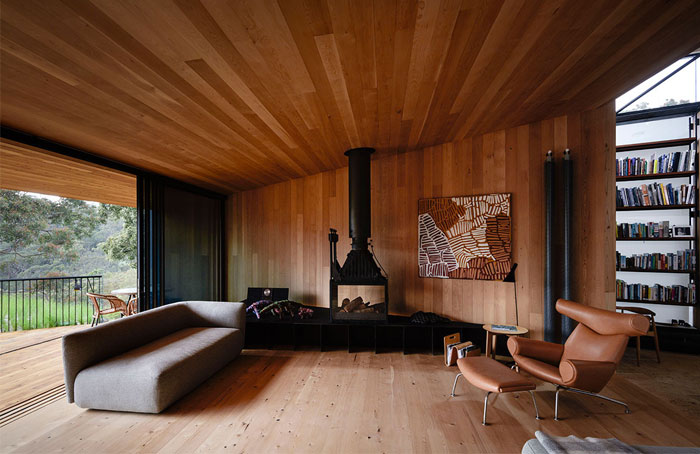 This is a project which took over eight years, including a design period of three years (and more than 400 drawings) and a construction period of 2.5 years. It entailed, says James, “exploring new and old and technologies, every material and finish choice (no plasterboard, minimal paint and optimal recycling of onsite materials) to create a low-energy, healthy and natural home, and allowing these decisions to inform both the interior and external aesthetic”. 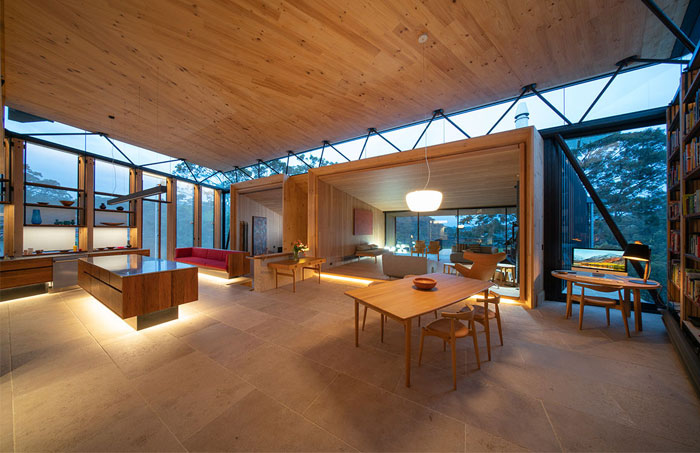 This is a house made primarily from cross-laminated timber (CLT), manufactured and processed in New Zealand. This includes structural frames and a boldly cantilevered volume forming one of the two main living spaces. James grew up and trained in Tasmania where he formed a love of local timbers. Hence, the timber linings in the house are Huon Pine, Blackwood and Celery Top Pine – the latter two being sourced from Hydrowood which recovers timber from Tasmania’s drowned forests. Collecting the Tasmanian timber took ten years, while the Hydrowood required ordering whole trees up to two years ahead in order to allow for drying and processing. 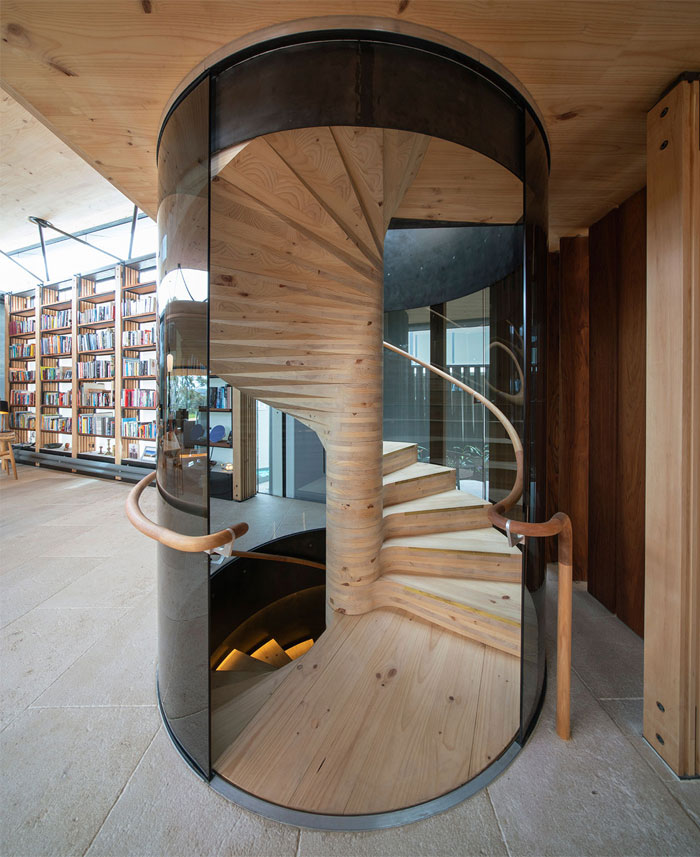 James has been fastidious in his attention not just to detail, but to the right detail. “Every bracket and screw,” he says, “is used to inform the overall aesthetic of the home with materials selected to develop a patina of use and character with time.” Hence, the tapware is from New York, the hydronic heating from the Czech Republic, the limestone flooring from Germany (cut and processed in Hong Kong), the travertine bath is from New Zealand, the superbly honed concrete vanities from the Gold Coast, and steel window frames and cladding from Austria – plus a host of sustainable features. 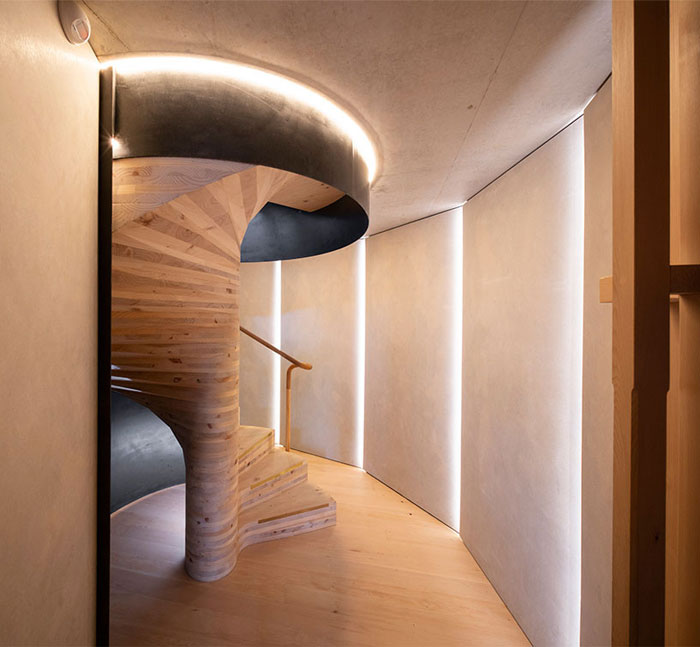 The house is a splendid example of privacy and community. At any point, one feels part of a whole while still enjoying private spaces which lend themselves to being adapted for different uses. Above all, it is a house of its place – growing out of the topography, its use of stone and timber acknowledging the site and its architectural inspiration responding to the architectural heritage of the area. 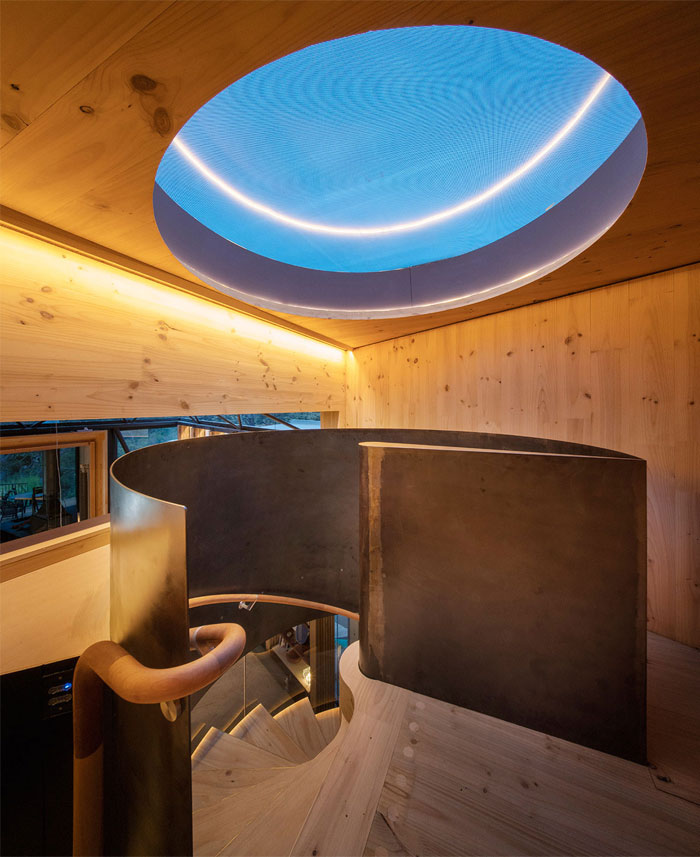 It is a many-faceted house both literally and metaphorically because its geometries – from the spaces to the window frames – are never orthogonal but always angled to generate constant surprise, stir the imagination and creatively edit the views. Written by Paul McGillick; Photography by John Gollings & Ben Guthrie; habitusliving.com 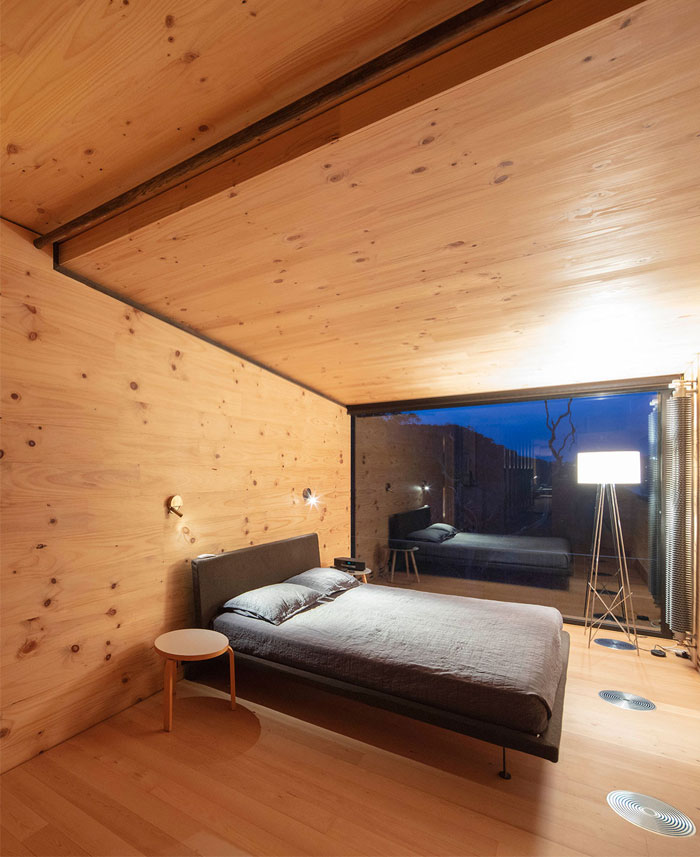 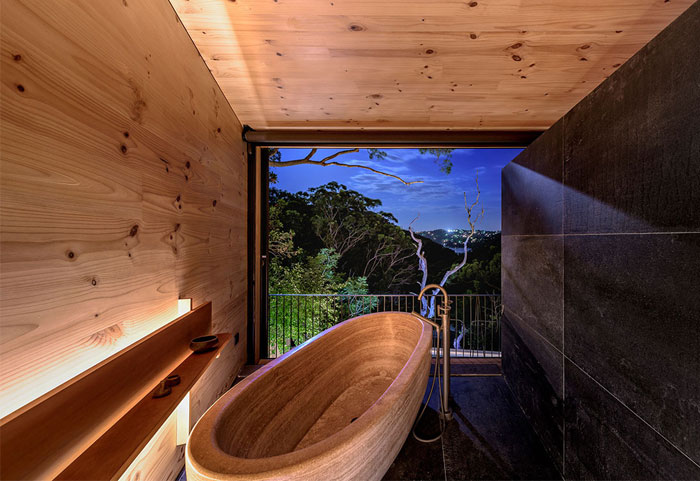 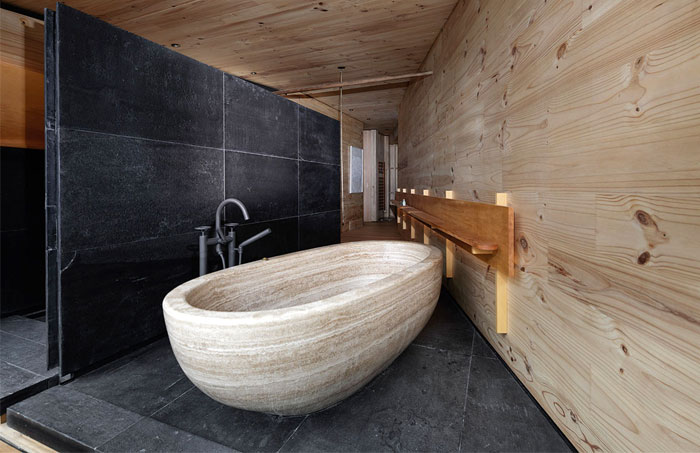 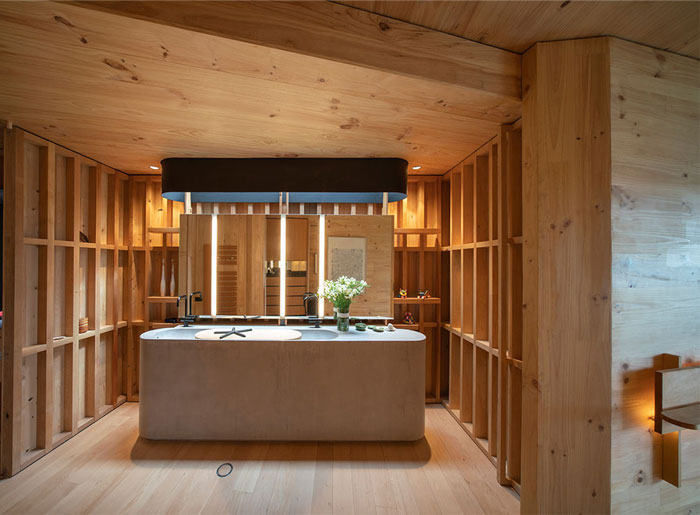 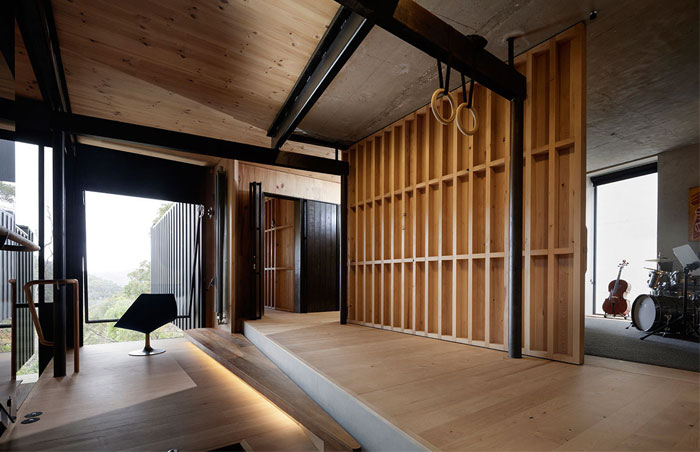 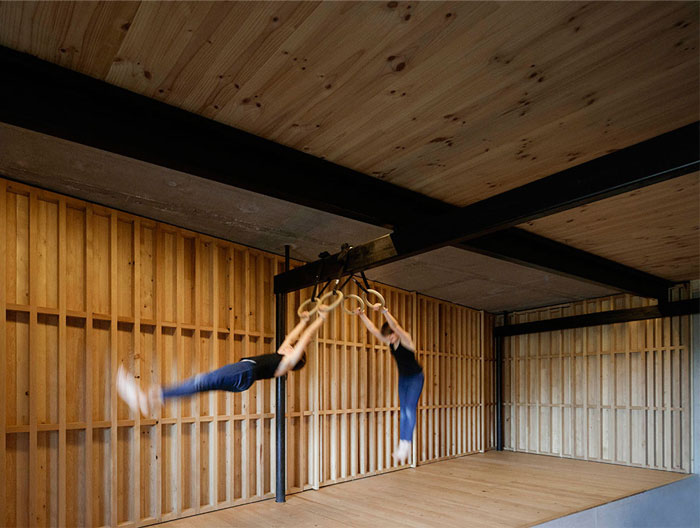 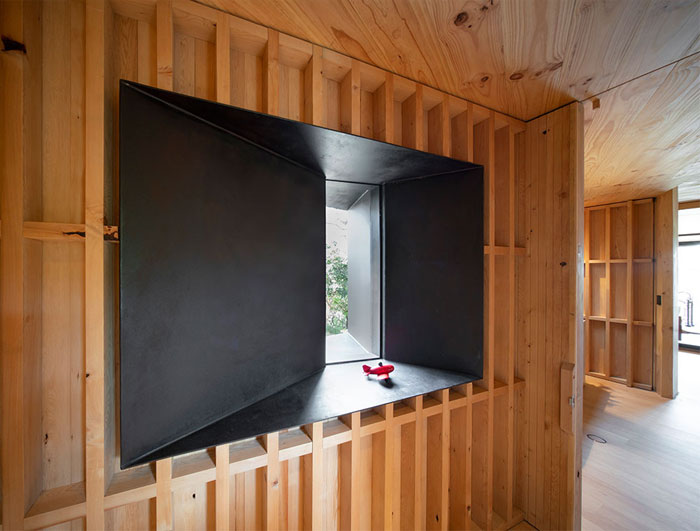 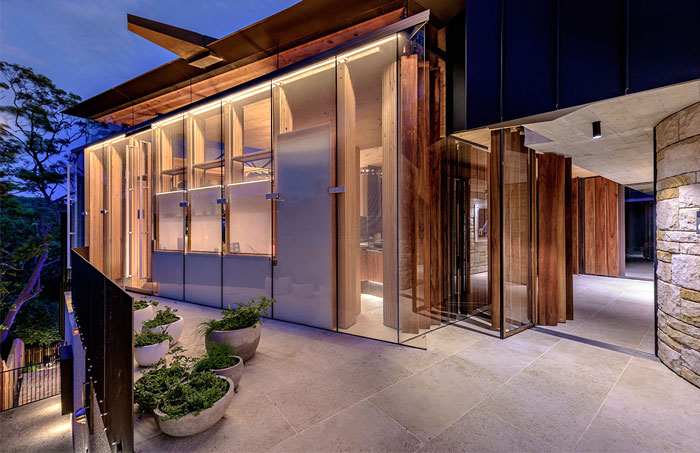 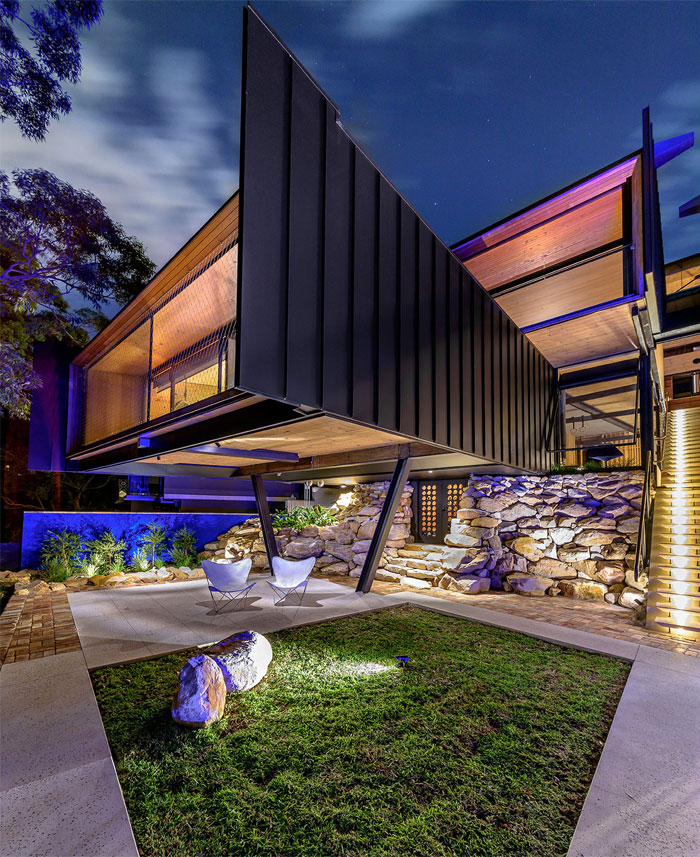