Frag offers within its catalog a selection of furnishing accessories designed to enrich the bedroom environment that are distinguished by contemporary lines, precious finishes and materials, along with a masterful attention to detail. The company’s creations are the expression of an international language and advocates a quality that is entirely Made in Italy – deriving not only from the value of the materials, but also from the productive excellence of the company, leader for generations in the processing of leathers and saddle leather. 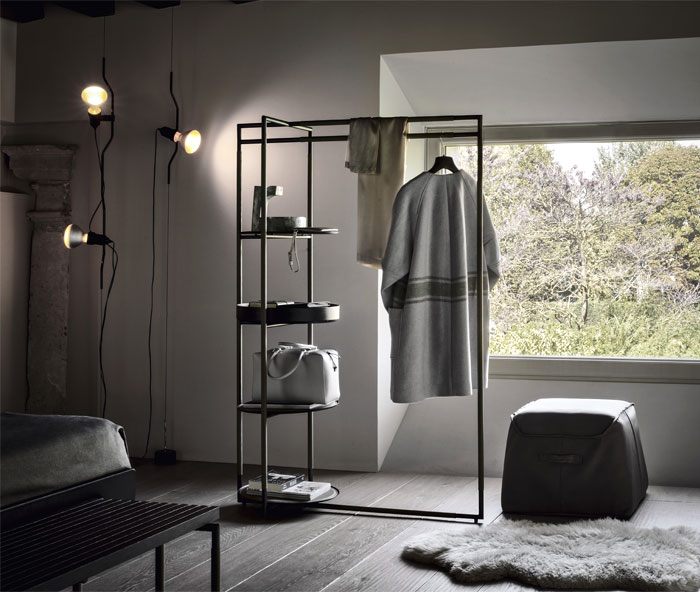 The collection of complements Bak, consisting of the Bak Valet Stand hanger and the Bak Bench padded bench, together with the Viae Valet Stand hanger, represent refined and finely finished furniture elements that will complete with style the furnishing of the sleeping area and can change its character. 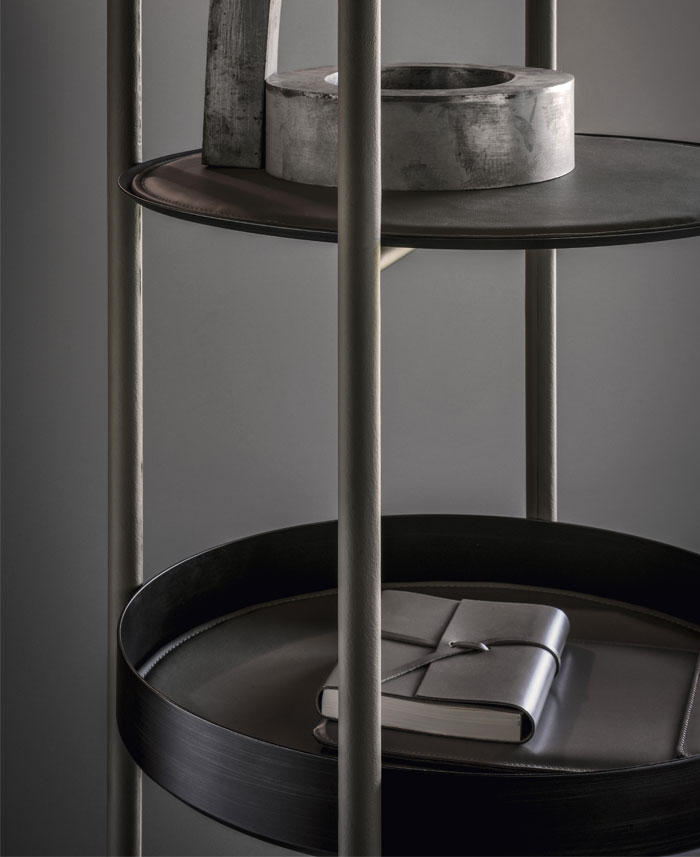 A completely new world for Frag is that of Ferruccio Laviani; not only for the type of products, but also for the different esthetical approach that unequivocally recalls the stylistic aspects of decoration. The Bak collection is composed of a series of complements aimed at the bedroom, in addition to a table and coffee table, whose common denominator is an essential structure that is strong both graphically as well as architectonically. Bak is defined by a rectangular shape in tubular bronzed metal, adaptable according to the type of furnishing which gives it life, upholstered and decorated with strips of leather (except for the space next to the joints), where the metallic finish remains in view, creating further detail that accentuates its geometry. 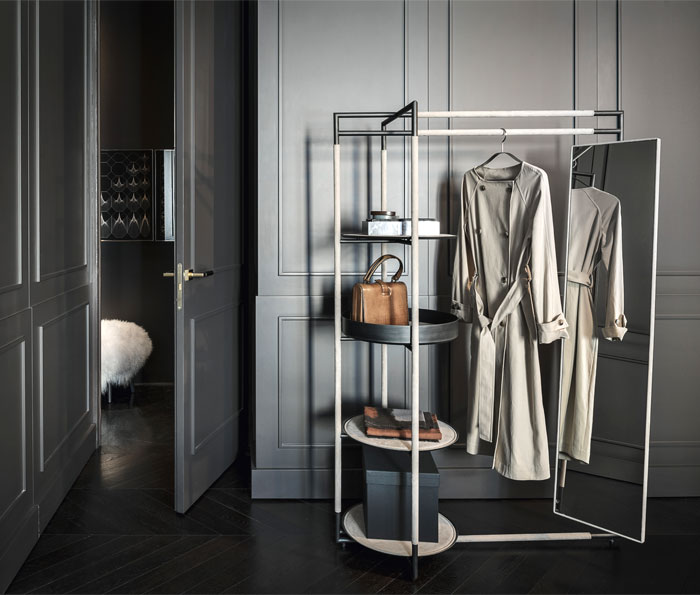 Simultaneously a coat stand and a storage shelf, the Bak valet stand is an exquisite and useful object to streamline space either in someone’s bedroom or in entrance. The frame, to which is added a parallel rod for hangers, is made even more efficient, thanks to the round containers placed on the sides, as well as functional coin trays with padded leather on the bottom. Bak valet stand is available with or without mirror and is paired with the Bak bench, which is also characterized by a pure and linear design, embellished by its leather upholstering. Its use is flexible: either as bench or as a table that introduced to any setting.
Majestic in its architectonic linearity, even the Bak table is defined by details that make up its lavishness and accentuate its symmetry. The leather trimming applied to the edges further decorates the walnut top. 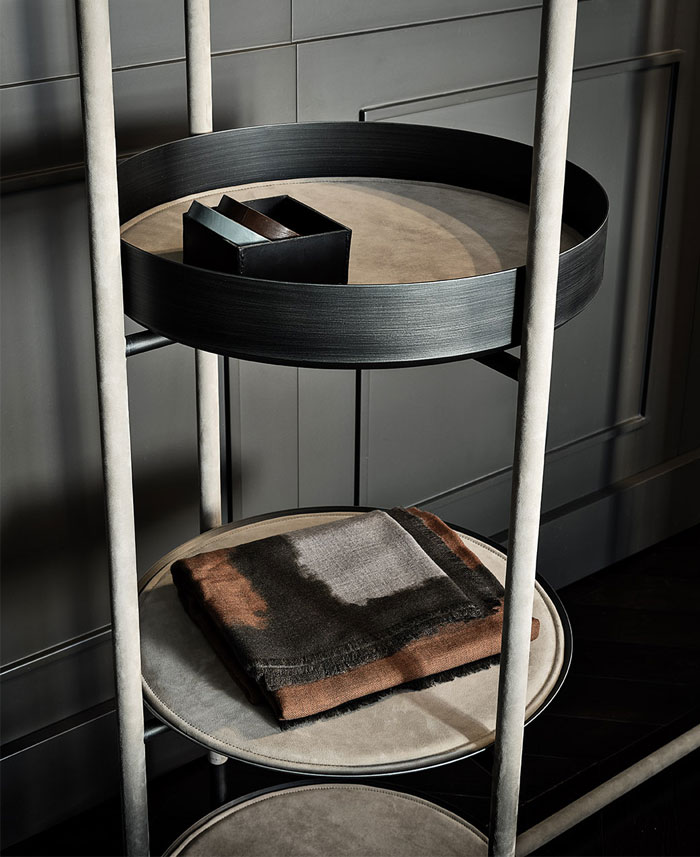 Designed by Analogia Project, Viae it was inspired by the cobblestones of ancient Roman roads, shaped and polished by time and wear. The vertical metal tube structure is held together by four circular pieces of the same material, forming three support points at different heights: two clothes stands and a valet tray, all stylistically linked by a leather finish. The clothes stands are formed from hand-finished tubing – straight for trousers and curved for coats and jackets – and a rounded-edge valet tray. Analogia Project have successfully combined functionality and looks in an attractive, decorative object for the private rooms in the home. 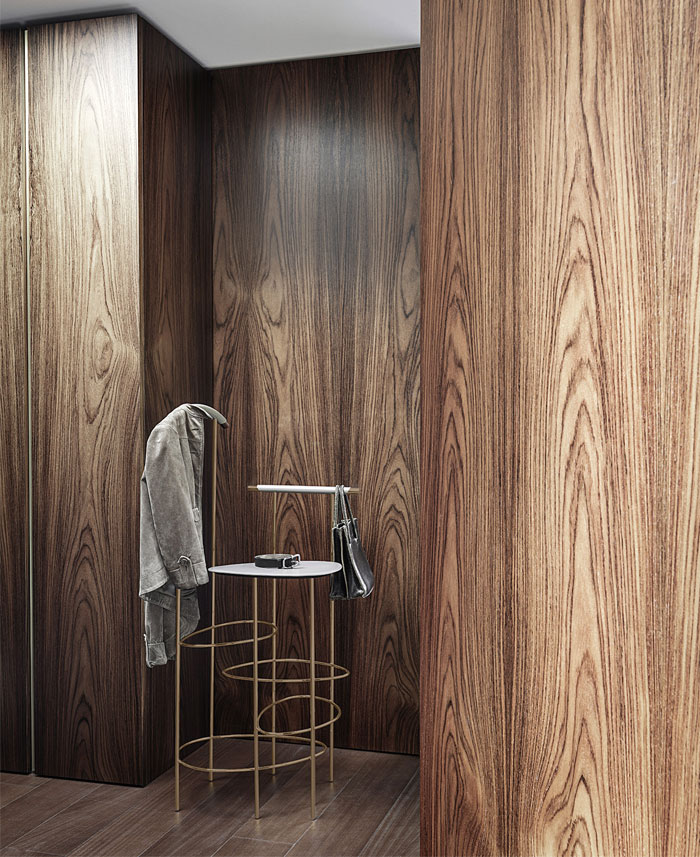 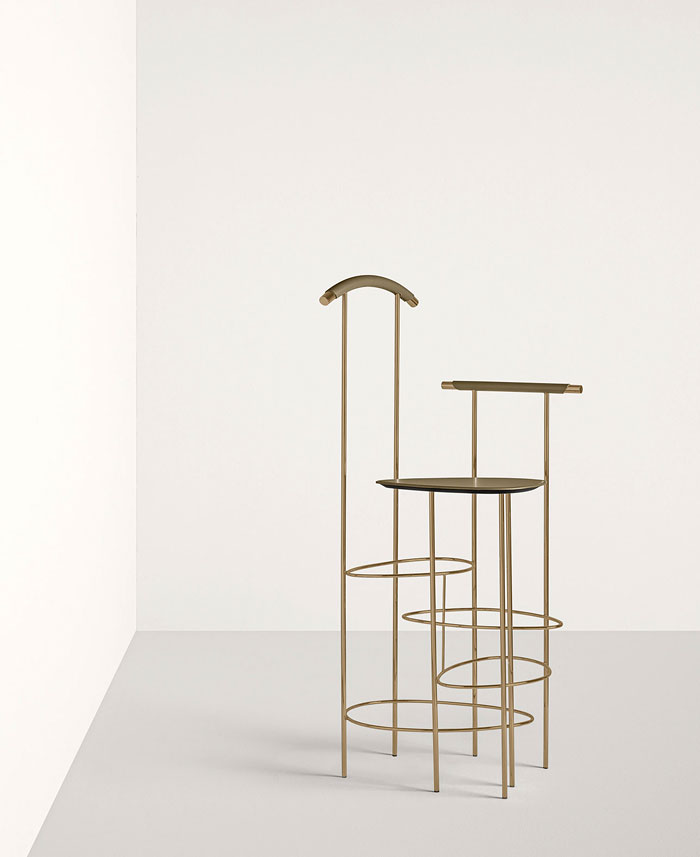