Unconventional but thoroughly logical. Like a German sports car, the beauty of RaeRae’s exterior belies the highly tuned rationalism that generated it. Responsive, contextual and strategic, this is a functional home with nuanced moments of surprise and discovery. 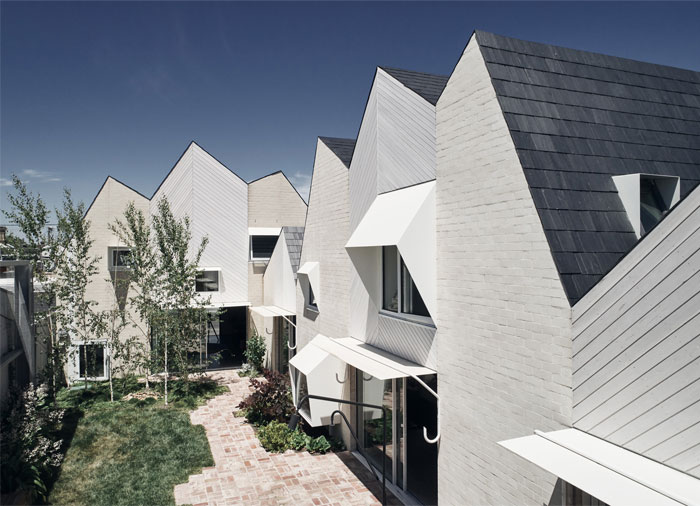 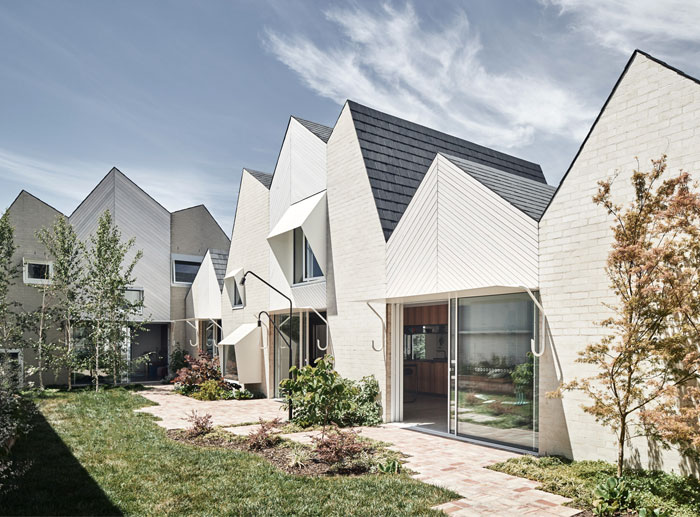 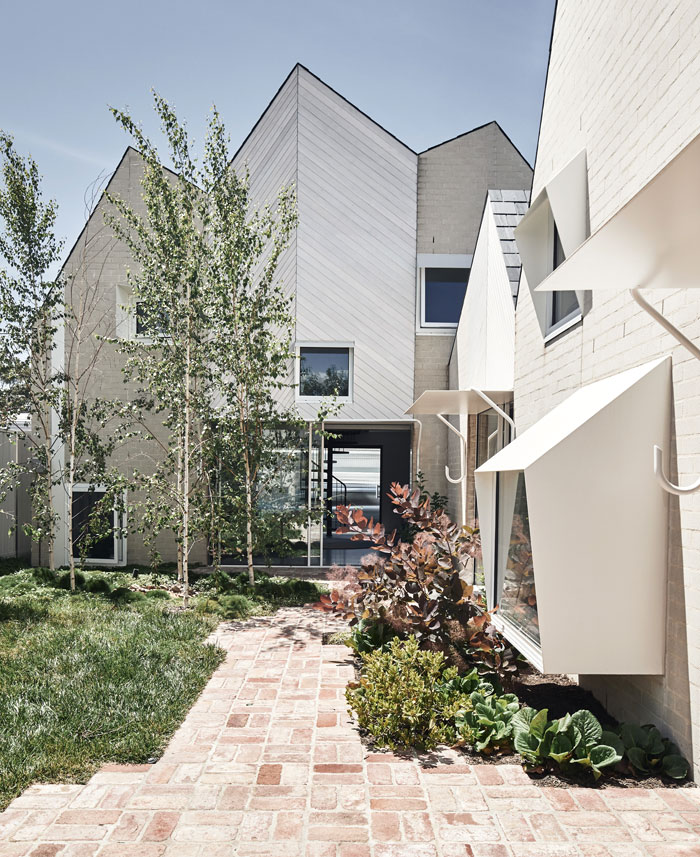 Austin Maynard Architects: RaeRae is a new five-bedroom family home which incorporates the front of two pre-exisiting terrace homes. A glazed entry, set back between the heritage buildings, unites the two and forms the gateway to the new build, surprising in light and scale. The entry leads from front garden to reveal more greenery, through to a lounge, kitchen and dining room. Above the kitchen is the parent’s bedroom, with walk in robe and ensuite. Beyond the dining room and concealed laundry room, is the two-storey kids-zone, with three bedrooms and a bathroom accessed via a spiral staircase. Below is a rumpus room, a study and a multifunctional utility/garage space. The front room of one the existing terrace houses is now a self-contained guest suite, including seperate entrance via the original front door. The other terrace is now a home-office and, located behind the other front door, a garden shed which leads directly through to the central garden. 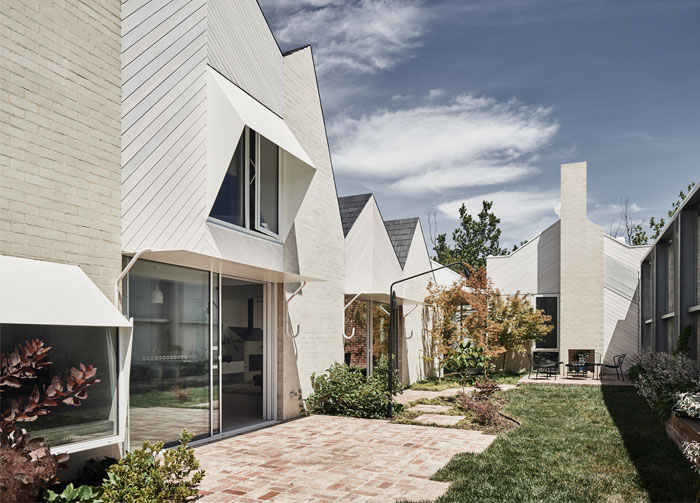 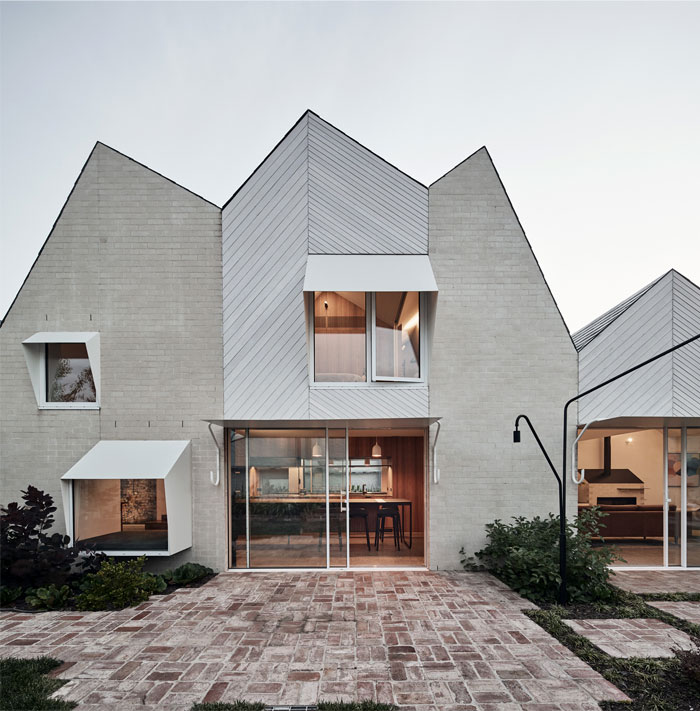 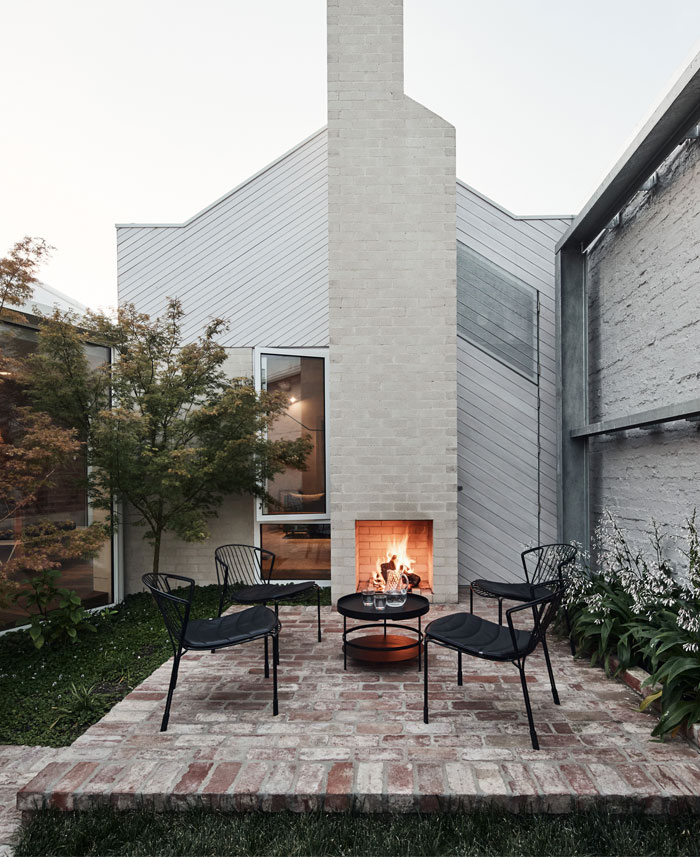 The owners of RaeRae were preparing to renovate and extend their tired single-fronted terrace in North Fitzroy, Melbourne, when the house next door came up for sale. The two terraces are each sited on long blocks with dual frontage potential, a street at the front and an unusually wide lane at the rear. The newly purchased home showed signs of a previous life but was dilapidated and unliveable. Walls were covered in George Michael and Pat Cash posters and floorboards squatters had pulled up and burnt in the fireplace. Structurally unsound, this home needed to be demolished, however a heritage overlay dictated that the street frontages of both homes must remain. Austin Maynard Architects were asked to combine the neighbouring properties to create a family home and garden for a family of five. 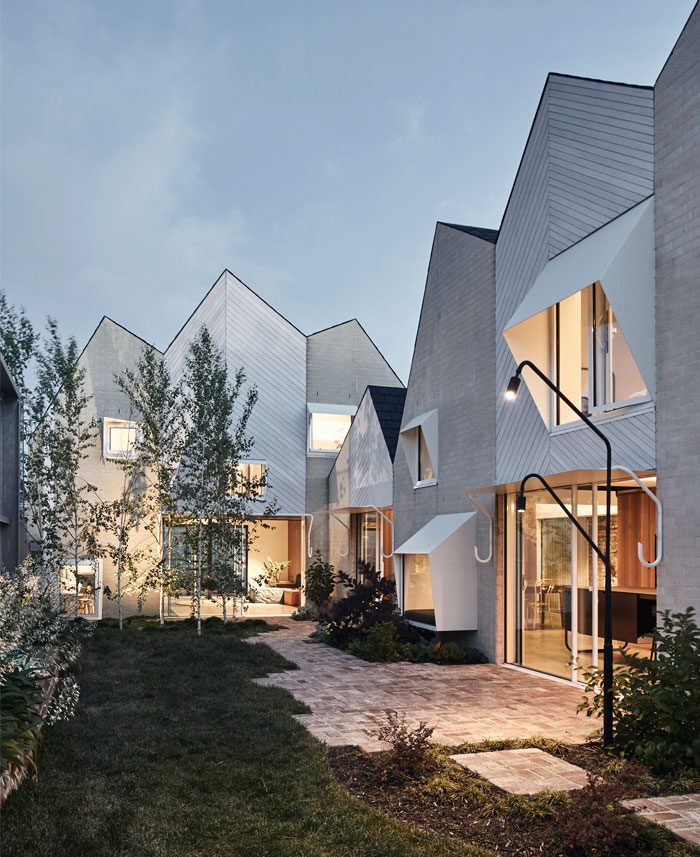 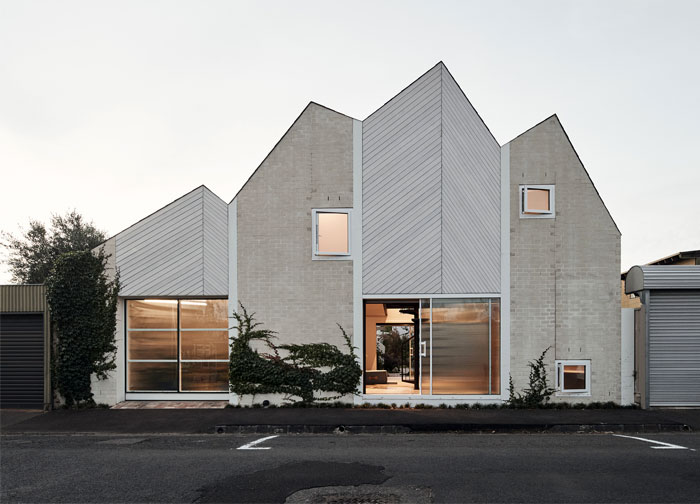 Whilst first appearances may suggest otherwise, logic, reason and rationality are the cornerstones behind the design of RaeRae. Initially it looks to be a fanciful design, an architectural mountain range, but at its core the house is responsive and strategic. The roof form is contextual, every rise and fall is tuned to minimise overshadowing and visual bulk, only truly apparent if it were studied from above. The roof is low against abutting gardens to avoid overshadowing, and high where the neighbours have built against the boundary. In creating height in all the areas, both internally and externally, the mountain profile emerged. 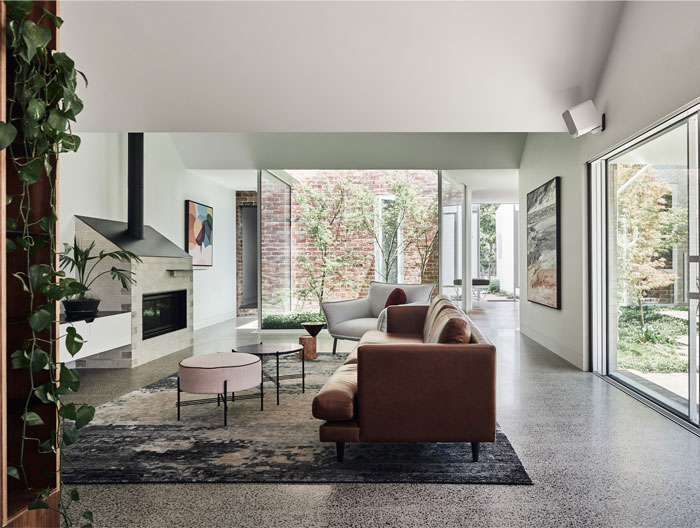 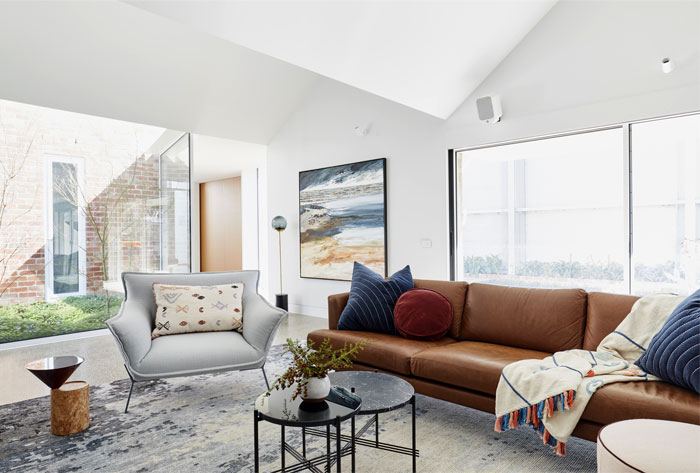 The same rational principle applies to the exterior materiality. The considerable weight of brickwork always meets the ground, and is never elevated. Wherever there is an opening, there is timber above, resulting in minimal structural steel, significantly reducing cost while also adding pattern and beauty. It is a strategic way of thinking about structure which ensure budgets are met, yet also leads to a diverse aesthetic. The form is the result of rational design. It’s not decorative. The timber and brick create an aesthetic that is not just fanciful but based on solid pragmatics. Similarly the window locations, externally randomly placed, yet internally undertake specific spatial functions. 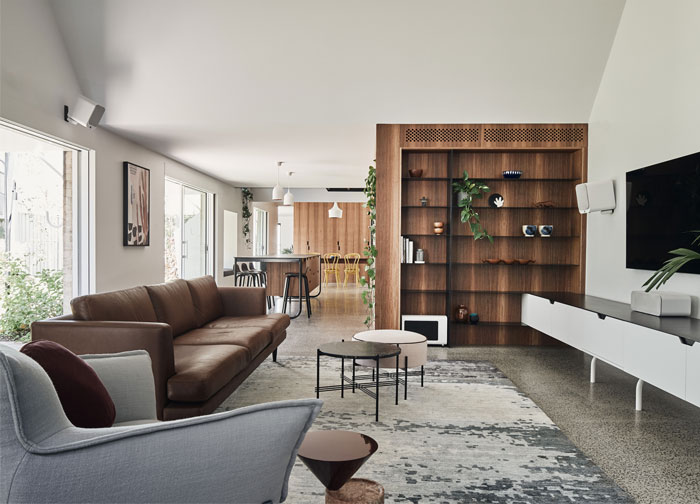 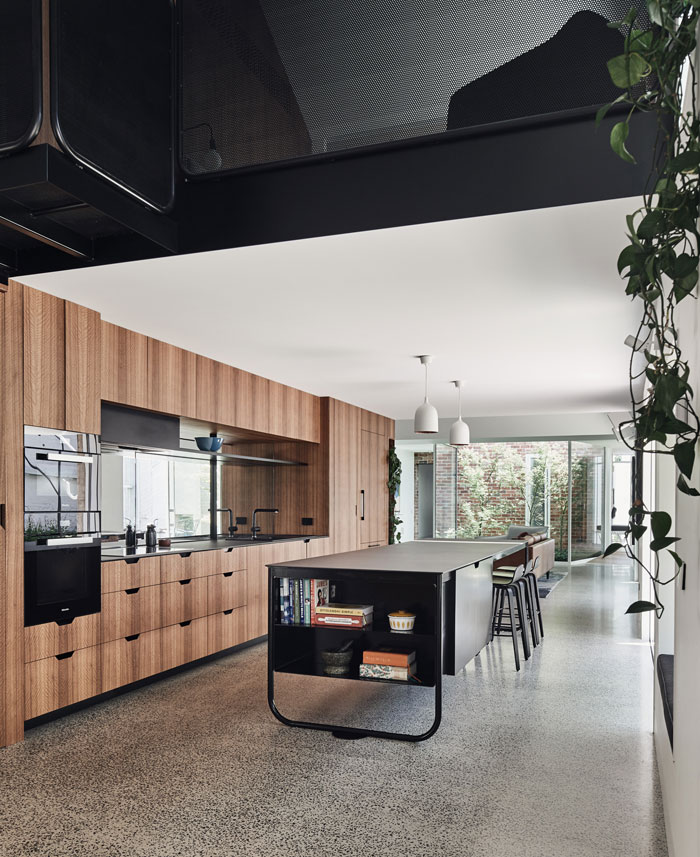 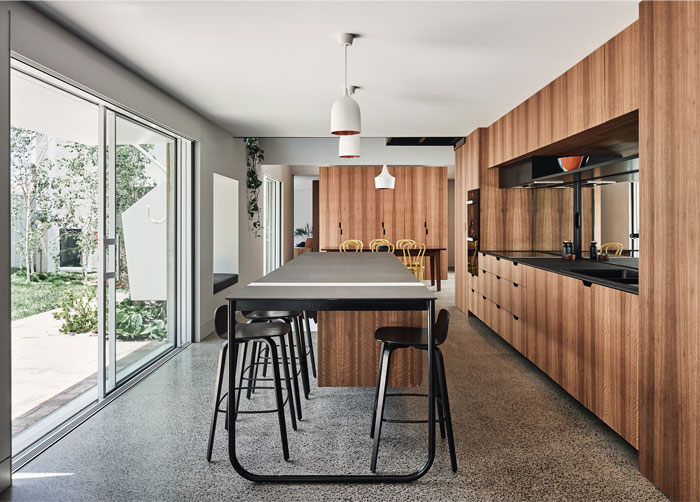 The wide laneway at the rear of the block has an emergent aesthetic, lots of garages, but also extensions, subdivisions and newer builds that have capitalised on the dual frontage aspect. Rather than defend from the street, the design opens to this public space. With no heritage constraints to this frontage, the aim was to engage with the street and the neighbours, with direct access, large openings and windows. With the potential change in future transport needs, the garage at RaeRae is a multifunctional space, well designed and fully insulated to allow for future use as a bedroom or airbnb studio. 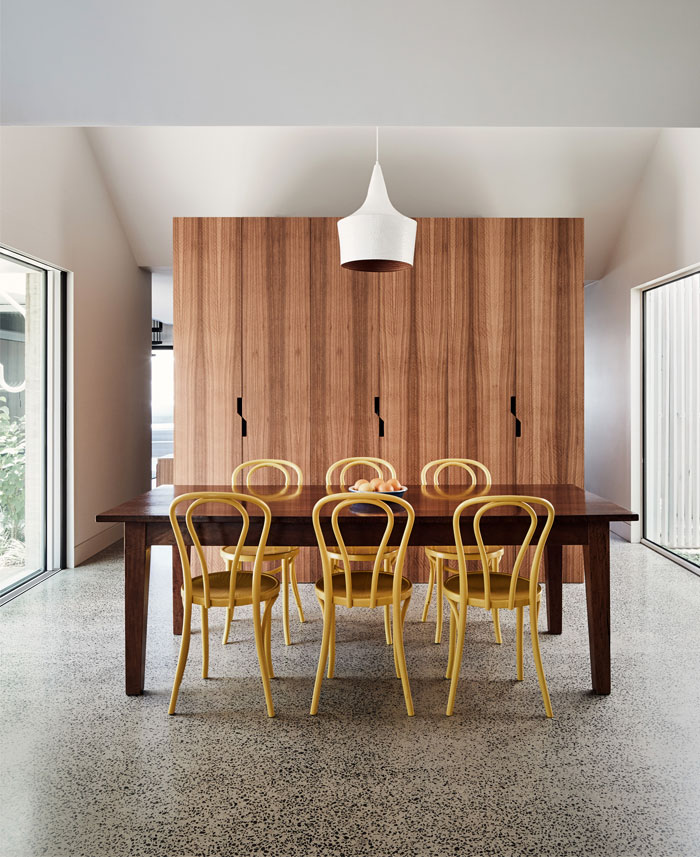 The children also have their own versatile areas. The rumpus room opens out to the garden and also to the street, future-proofed to become self-contained with its own direct street access. Behind is a dedicated craft/study area, designed to allow for both maximum creative mess and quiet secluded revision. A spiral staircase leads up to a bathroom and three bedrooms, with a bright colour carpet chosen by each child. The perforated steel landing connects the bedrooms and bridges a double height void. The three bedrooms feature full height sliding panels, which allow the siblings the option of being private, or to open up and converse with one another across the hallway – both between the bedrooms and from up and downstairs. Architects: Austin Maynard Architects; Area: 371.0 m²; Year: 2020; Photographs: Peter Bennetts, Stephanie Rooney; 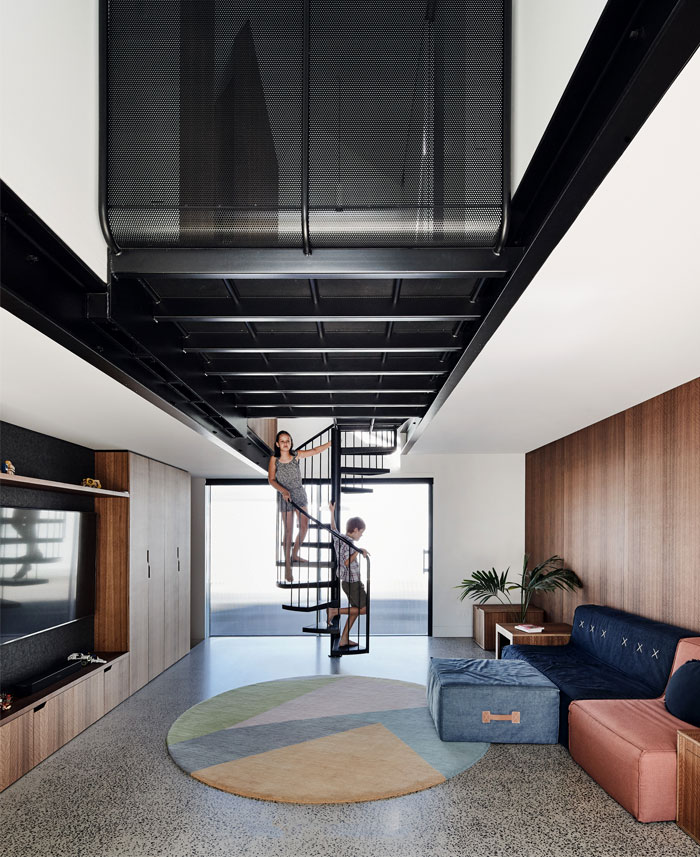 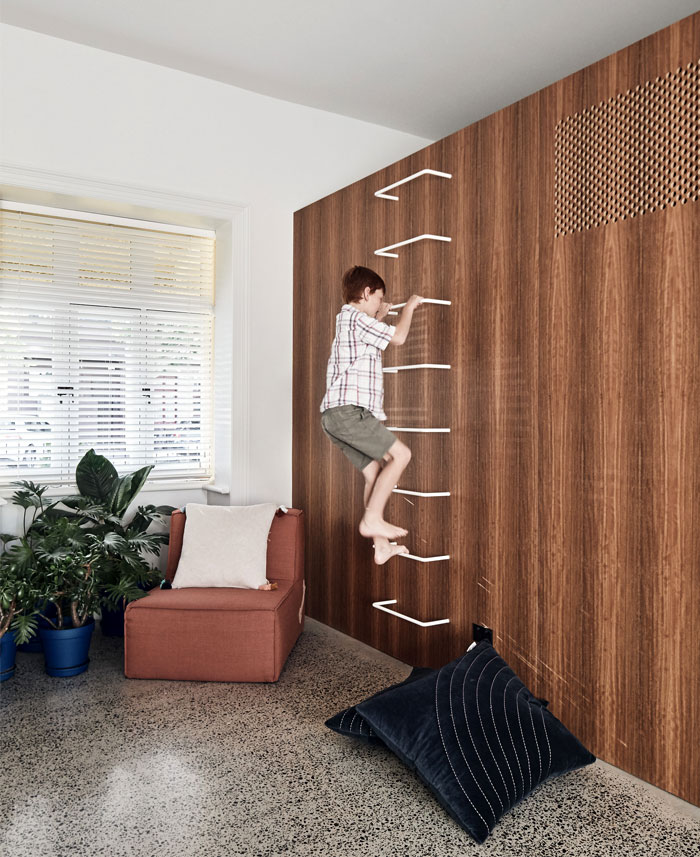 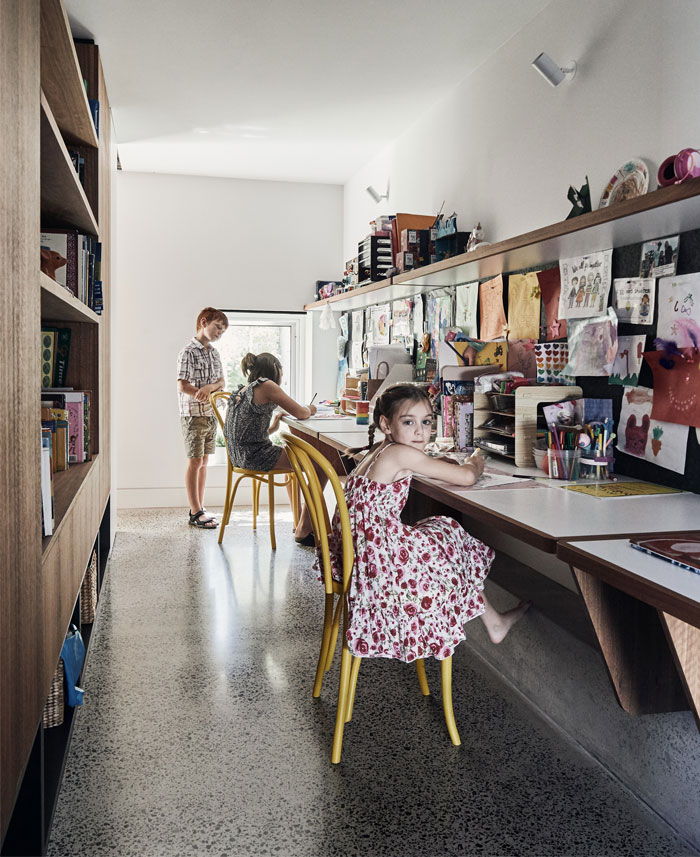 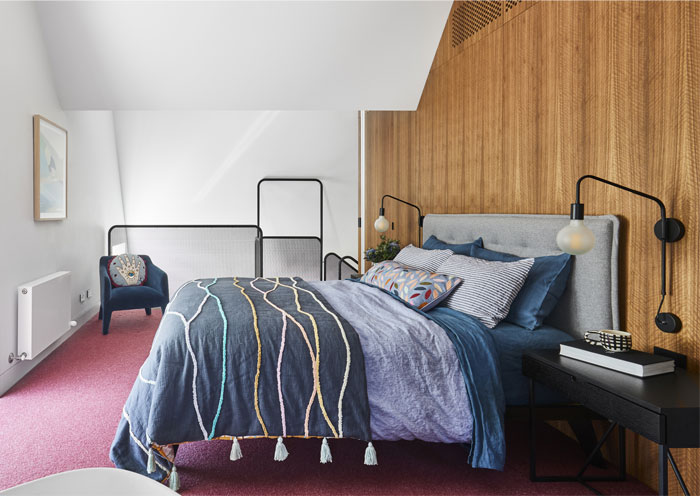 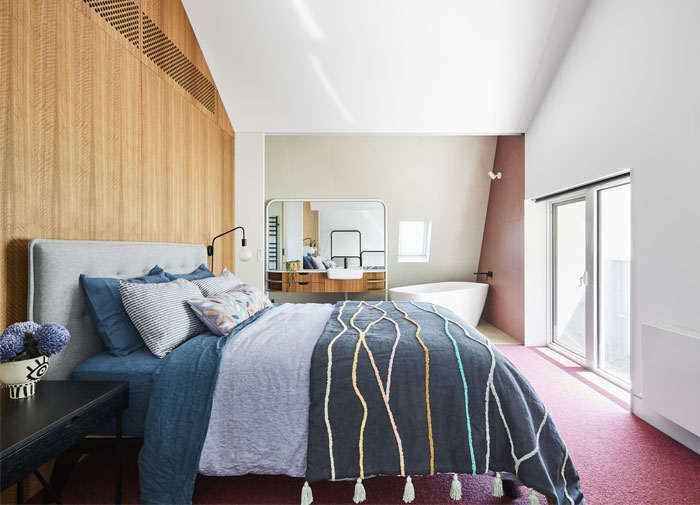 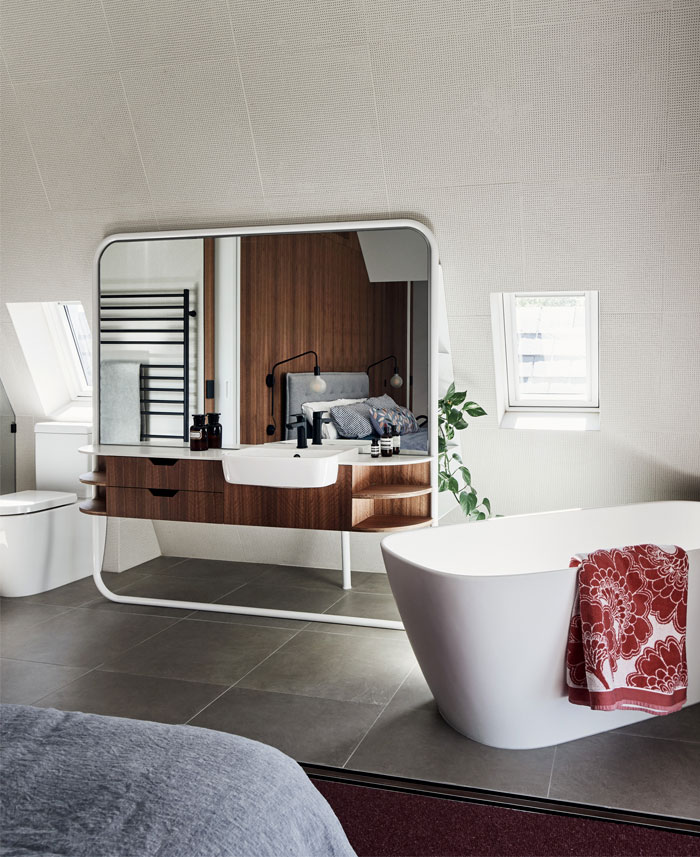