28 Posti is 6 years old and feels the need to redesign its interior to make it even more welcoming – which has now accomplished some important goals – without distorting its convivial and relaxed atmosphere and its stylistic features related to the concepts of authenticity, material, simplicity, and origin. 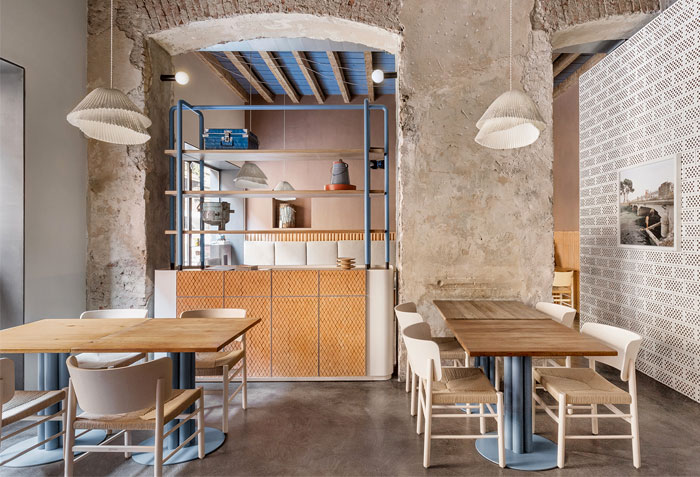 Cristina Celestino, the famous designer and architect with an unmistakable style, was called upon to think up and design an interior that is in continuity with the imagination that patrons associate with 28 Posti, a place that is permeated by an identity that has already been established, yet somehow still evolving. Materiality, texture, color (often tone on tone) are undoubtedly the concepts on which the designer’s intervention for 28 Posti is based, making use of Fornace Brioni and Matteo Brioni‘s range of products. 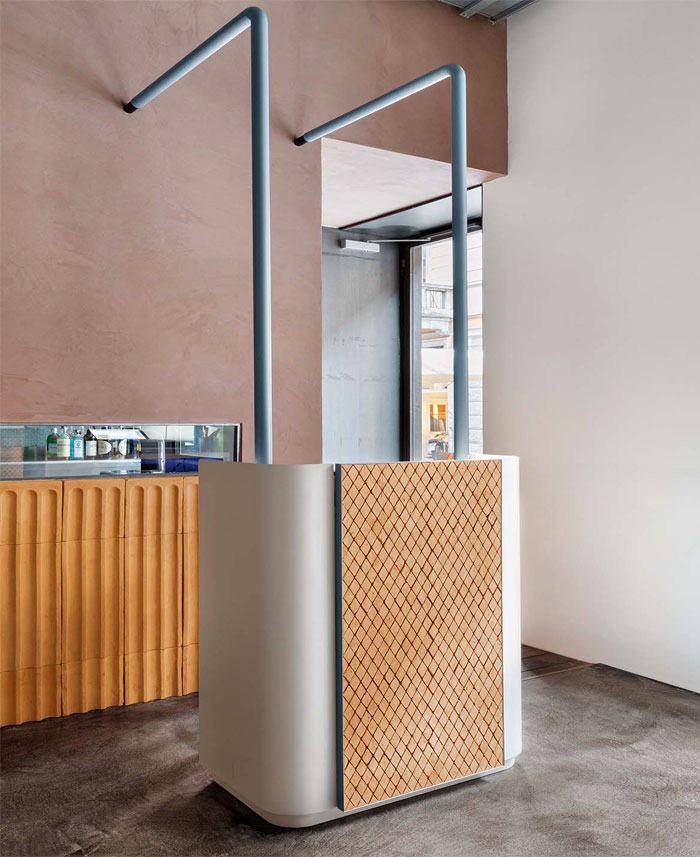 The project first takes on the theme of color. The identified palette plays with natural materials – wood in different finishes, Fornace Brioni‘s terracotta, natural waxed iron to which are added a de-saturated blue and an earthy marc color, in addition to the chalk white of the longitudinal walls. 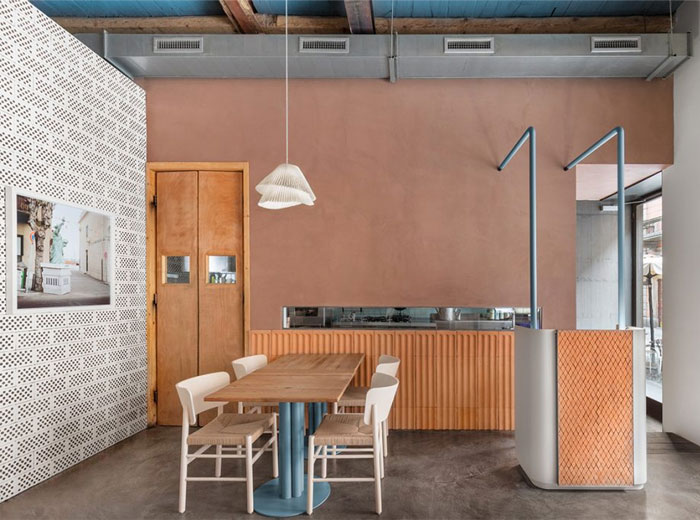 The ceiling alternates original and restored wooden beams with de-saturated light blue backgrounds. The Giulio Romano terracotta boiserie from the Gonzaga collection by Fornace Brioni covers the walls of the short sides – together with Matteo Brioni‘s unfired earthenware plaster that reaches the ceiling – while in the center of the room the original brick septum remains the protagonist. The wall separating the kitchen is also treated with a natural earth-based material plaster. 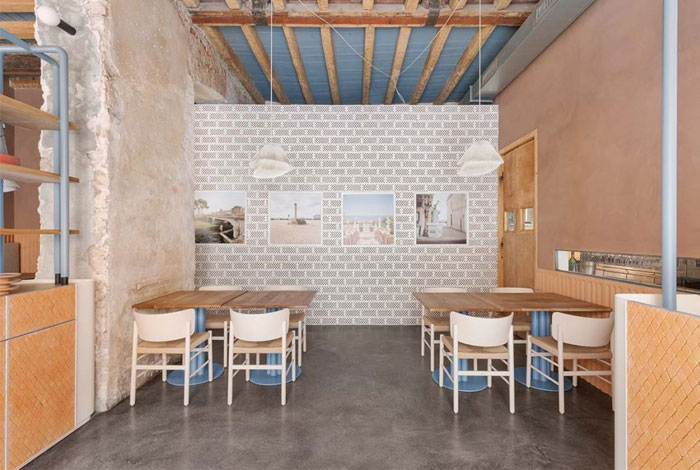 In the second room, a comfortable upholstered bench is set against the back wall, while the tables have been redesigned to complete the renovated space and matched with Fratina chairs by Billiani, selected by the architect. 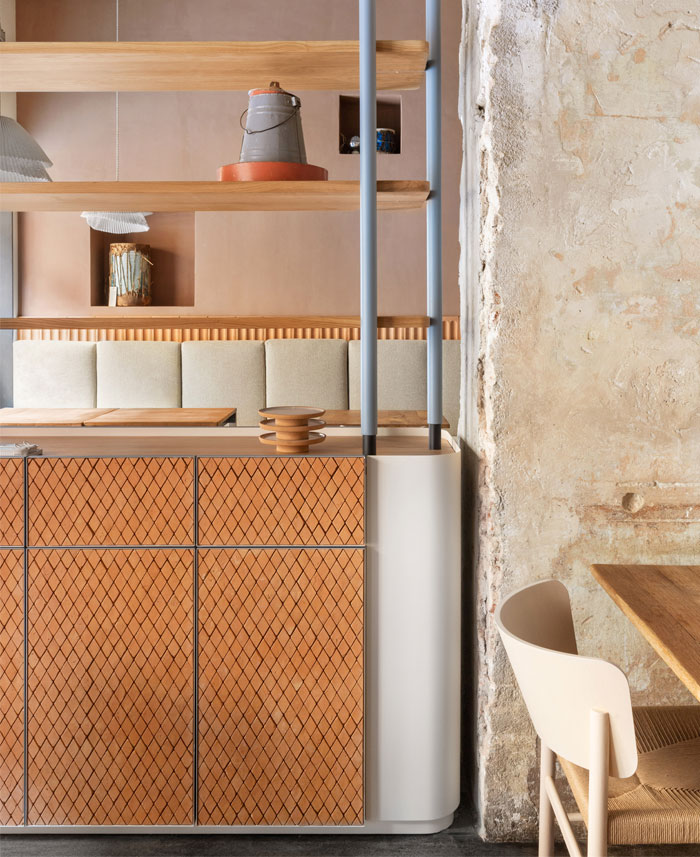 A storage unit is positioned in the arch designed by the central brick septum, deliberately detached from the wall, and stands proudly on its own. It is a rounded volume at the ends, enclosed by two curved sheets which play on the front with a micro-mosaic terracotta covering. In the upper part of the cabinet, visible wooden shelves are supported by a blue tubular cage and capture the style of the case cabinet that is positioned on the threshold of the entrance of the room. 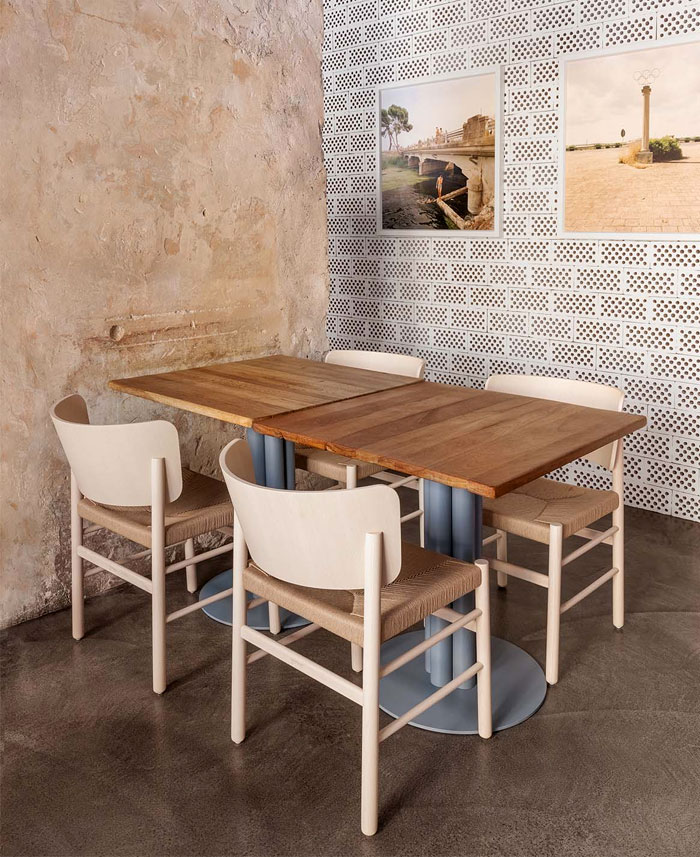 The lighting is provided by suspension lamps in micro-perforated sheet metal by the Spanish company Arturo Alvarez, which are as light as paper and which then display a materiality and accurate workmanship to the attentive eye. 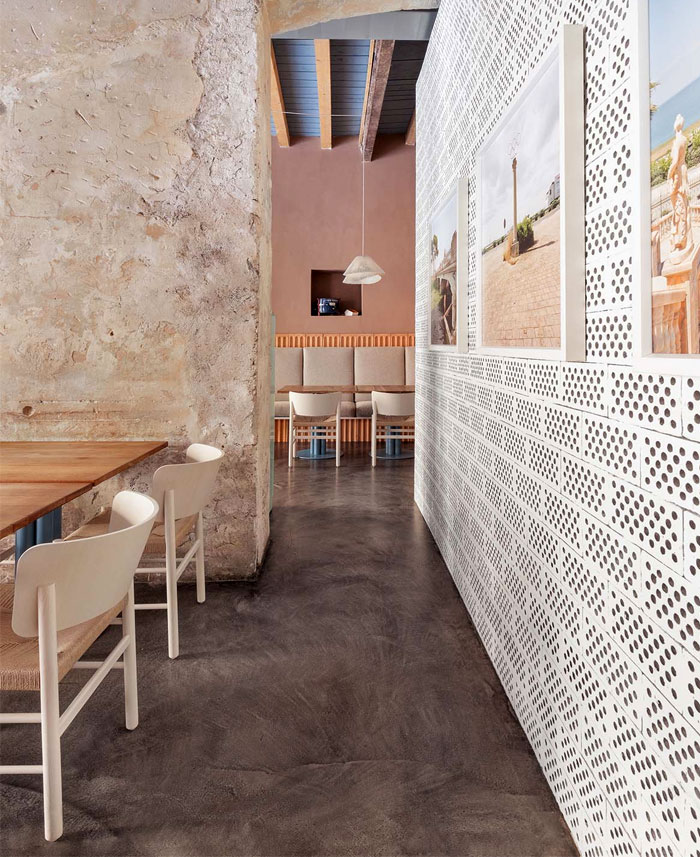 ‘The identity of the restaurant is now established, and my project deliberately wants to be in continuity with the imagination that the Milanesi associate with 28 Posti. The work plays on the concepts of authenticity, comfort, simplicity, origins, and aims to create a parallel between the interior of the restaurant and the kitchen of its chef Marco Ambrosino, the undisputed soul of the place‘. Cristina Celestino 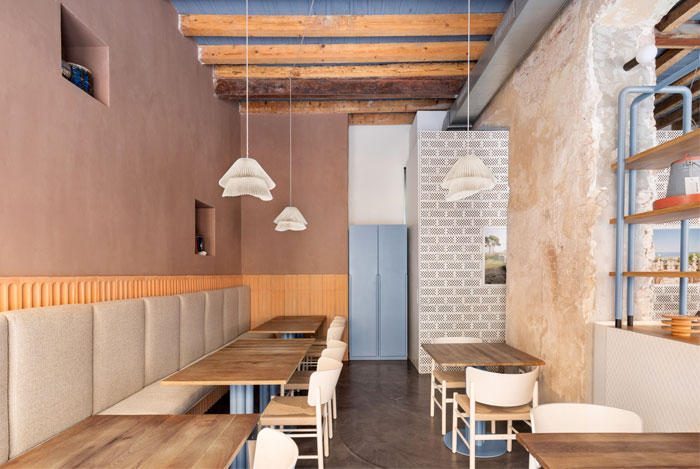 ‘We started a dialogue with Cristina thinking about the possibility of creating a set up for the table. A much larger project slowly took shape and has embraced our desire to renovate the interior of the restaurant with work that goes in the same direction of growth that 28 Posti has seen these past six years. I think Cristina has managed to interpret our identity very well, respecting it, but at the same time she has reinterpreted us through her design world‘. Silvia Orazi for 28 Posti. 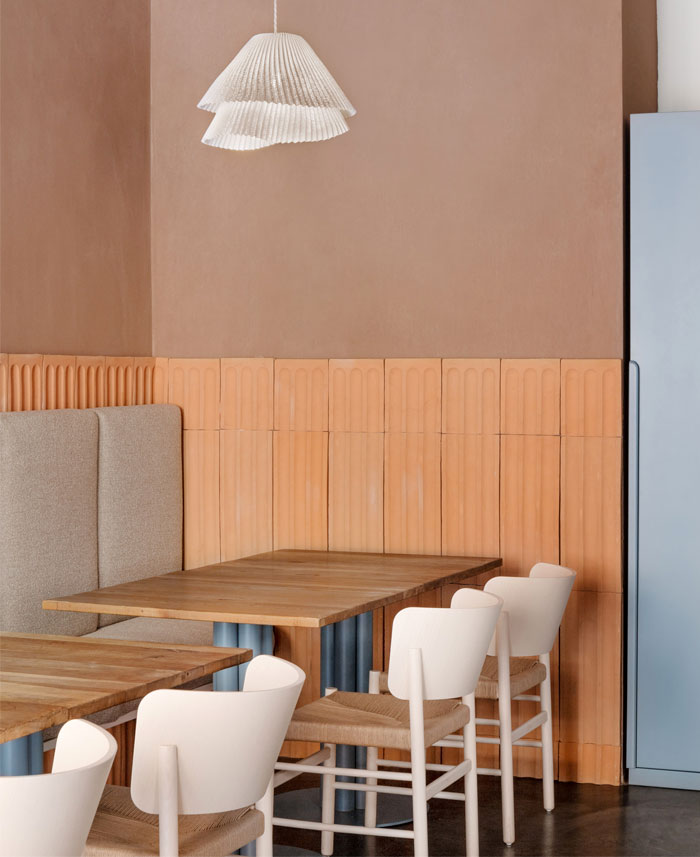