The castle area of Hradec nad Moravicí is situated on the territory of the low mountain range of the Nízký Jeseník, in the area of southern Silesia. Its area is one of the largest in the Czech Republic: in addition to the Červený zámek (Red castle) it includes Bílý zámek (White castle), Bílá věž (White tower) and a park. In 2001, the castle complex was declared a National Cultural Monument. 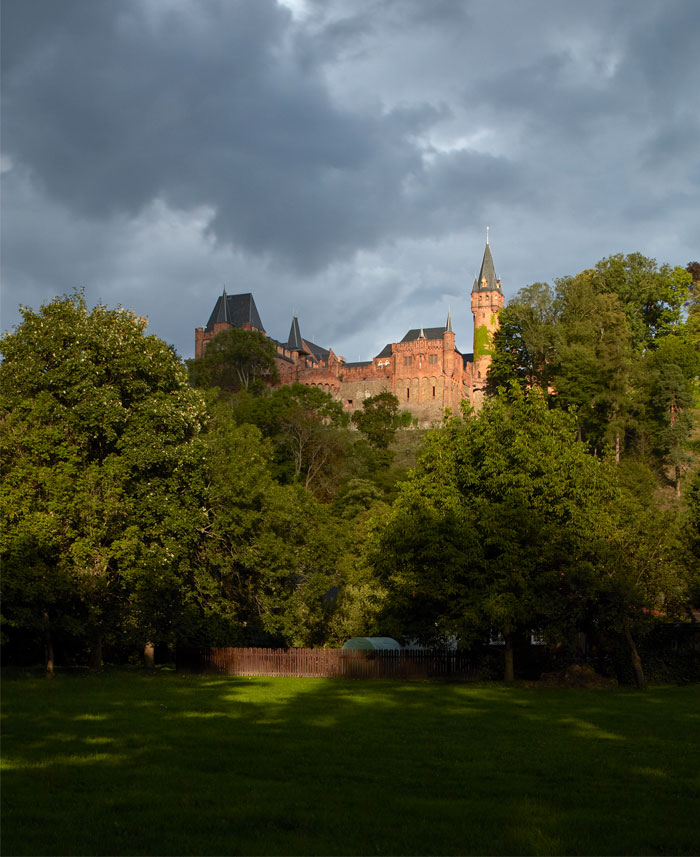 Červený zámek is an important social and cultural centre. Among other things, it hosts the international interpretation competition and music festival “Beethoven’s Hradec” and the large cultural festivals “Hradecký slunovrat” (Hradecký Solstice) and “Hrady CZ” (Castles CZ). This romantic neo-Gothic castle, with its numerous turrets and battlements, is ranked among the “most fabulous” in the country. 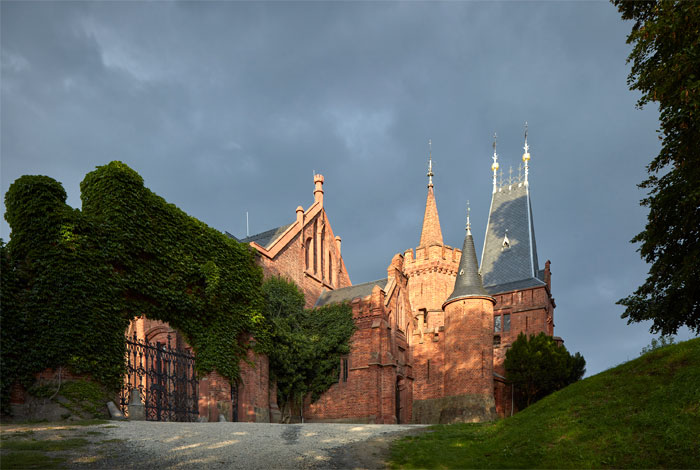 The stables complex (the so-called Červený zámek) was built in the 1880s, according to a design by Wrocław architect, Alexis Langer. The inspiration came from the North German Gothic castles, specifically the Crusader castle Malbork, in present-day Poland. Prince K.M. Lichnovský placed a stable here for his English thoroughbreds, with a depot for buggies and carriages, a carriage house / blacksmith’s, and other operating rooms and cellars. It also included a residential tower with guest rooms, a clock tower, and the main entrance gate to the entire castle complex. 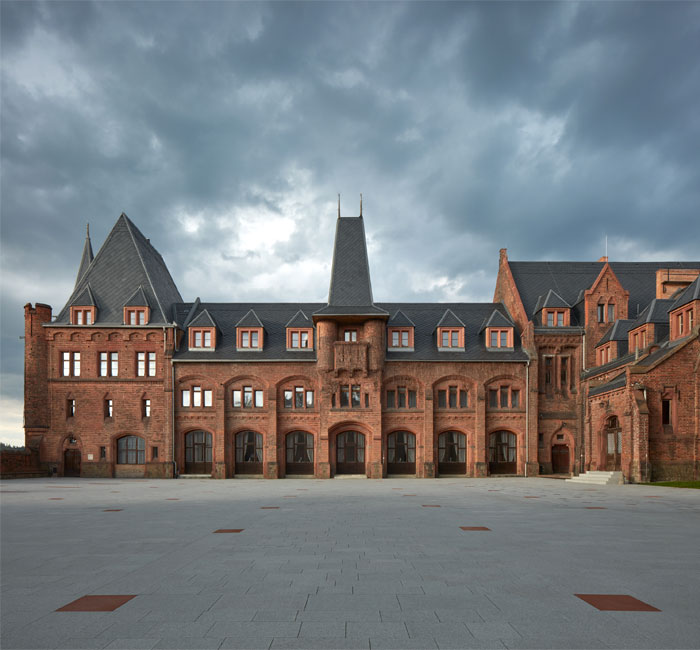 The history of the 20th century was reflected in the function and appearance of the stately home, along with its political and economic twists. Prince Lichnovský’s interest in stables diminished with his growing passion for motoring. After the Lichnovskýs left Hradec as their main residence in 1913, the building definitively lost its original purpose. During the First World War, the stables were used by the army as a hospital for the wounded, and for sick horses from the Eastern Front. 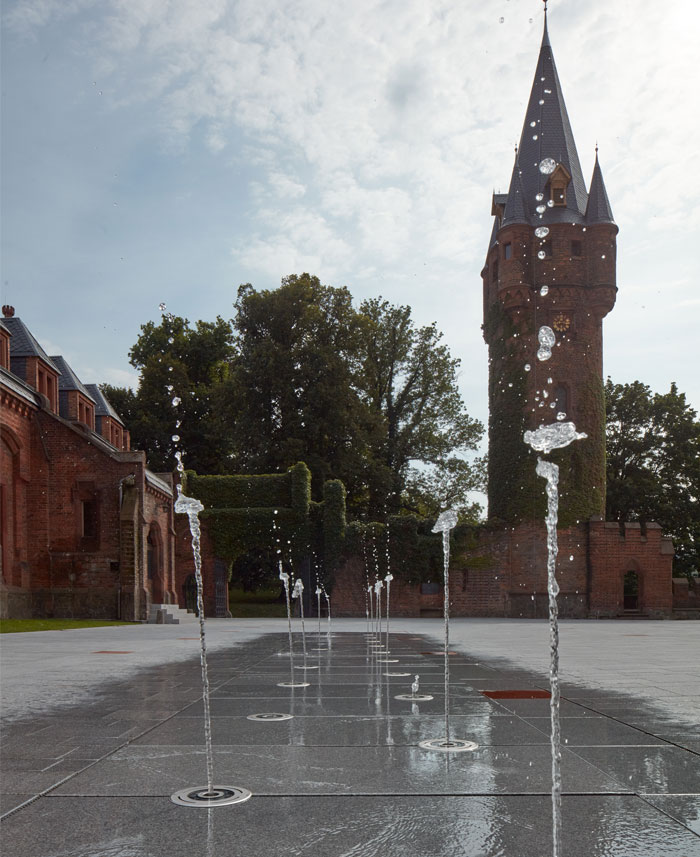 In the 1930s, the Lichnovskýs sought to demolish the then virtually unused building. Due to the high interest in local history and tourism – “it would hurt tourism very much, and damage the landscape character of the whole town” – however, the state administration of the young Czechoslovak Republic did not support their intention. At the close of World War II, the castle was damaged during the bombing, and partially burned down; in the post-war years it was temporarily repaired. After refusing to place a state stud farm here, the stables were converted in 1954-59 into a restaurant with a hotel and socio-cultural spaces. In 1972, a part of the building burnt down, and the condition from the renovations from 1975 has been preserved up to this day. 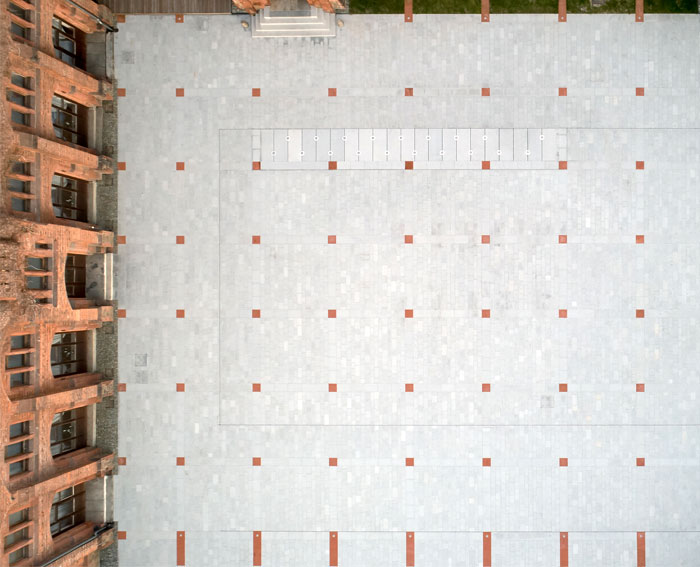 During the first phase of a reconstruction and restoration it was essential to secure structurally unstable masonry walls, vaults, balconies and roof trusses and to replace roof tiles and dormers. The intent was to retain original masonry walls as much as possible. The castle`s façade made from red face bricks with red sandstone inserts was decorated by handcrafted elements – such as coat of arms, engraved slabs, gargoyles, mascarons, rosettes, end pieces, statues of basilisk and chimney heads. The original stone miniature of the “Tower” was returned to the top of the gable of the Upper Stables. 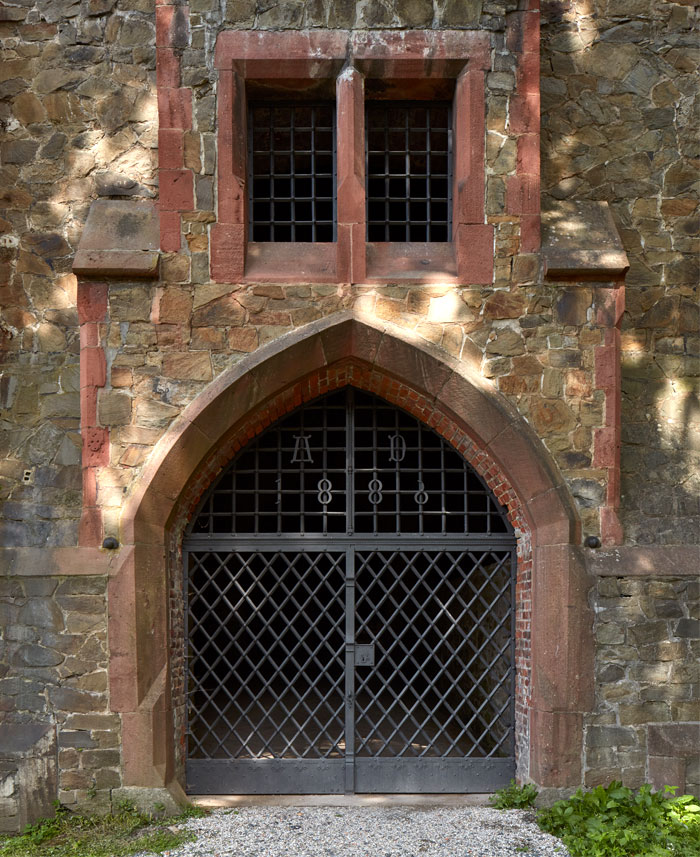 The vaulted space of the Lower Stables (the former hospice for wounded horses) was restored into its original layout and monumentality. Today it is used for exhibitions, concerts as well as a glyptotheque – to store the original statues and roof and façade stone fragments. The pitched dormers were built according to the 1950s scheme to suit today’s demand for an accommodation. Slate tiles were used for the roofing to minimize flashing details – to create a valley, a hip, a ridge and a gutter. 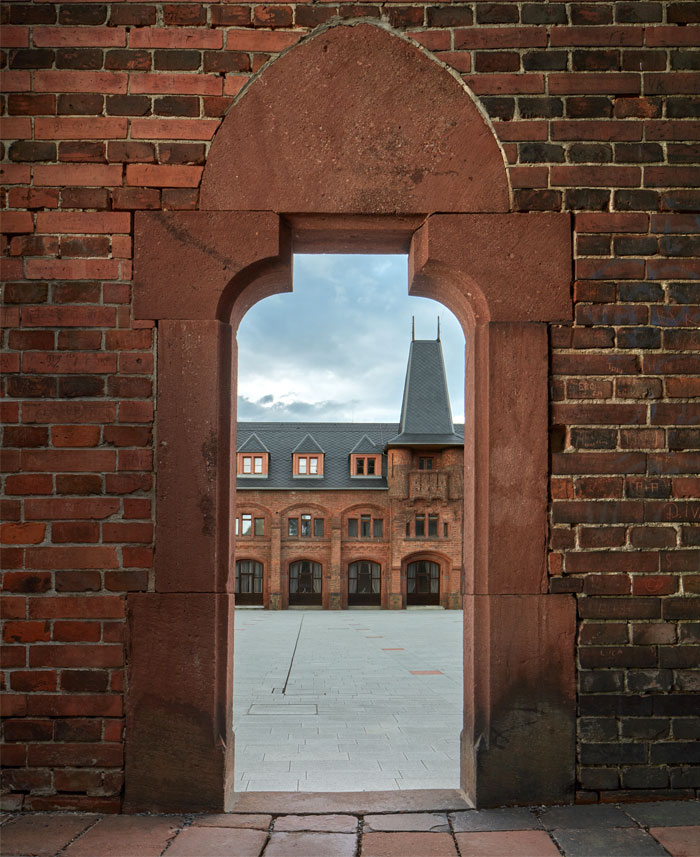 The courtyard was unified again to provide a platform for cultural events. Wall to wall paving is entirely from granite in order not to compete with the romantic expression of the Červený zámek (Red Castle). A so-called hidden water fountain enhances pleasant microclimatic conditions especially during hot summer days. 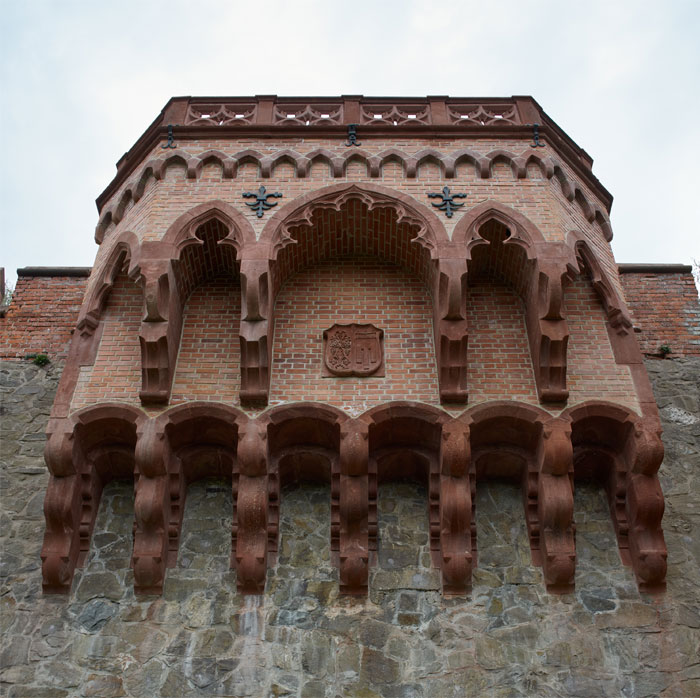 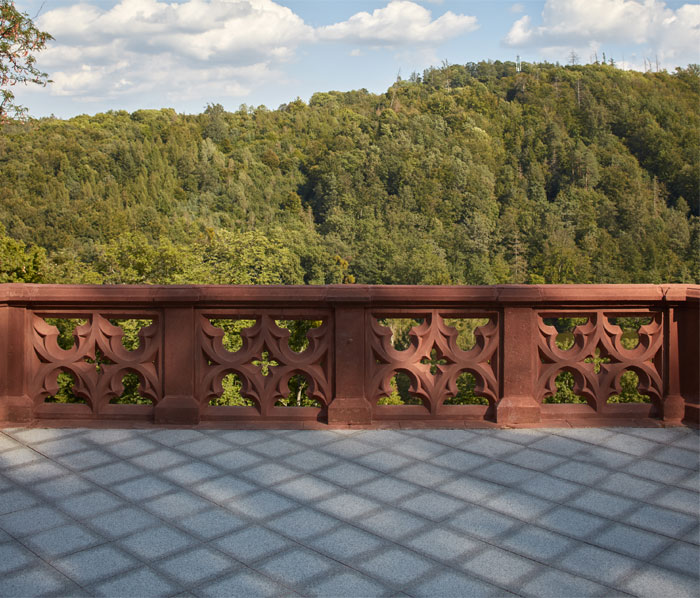 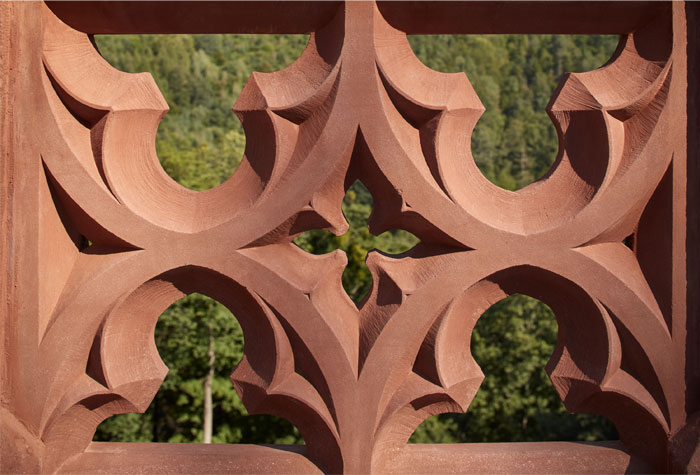 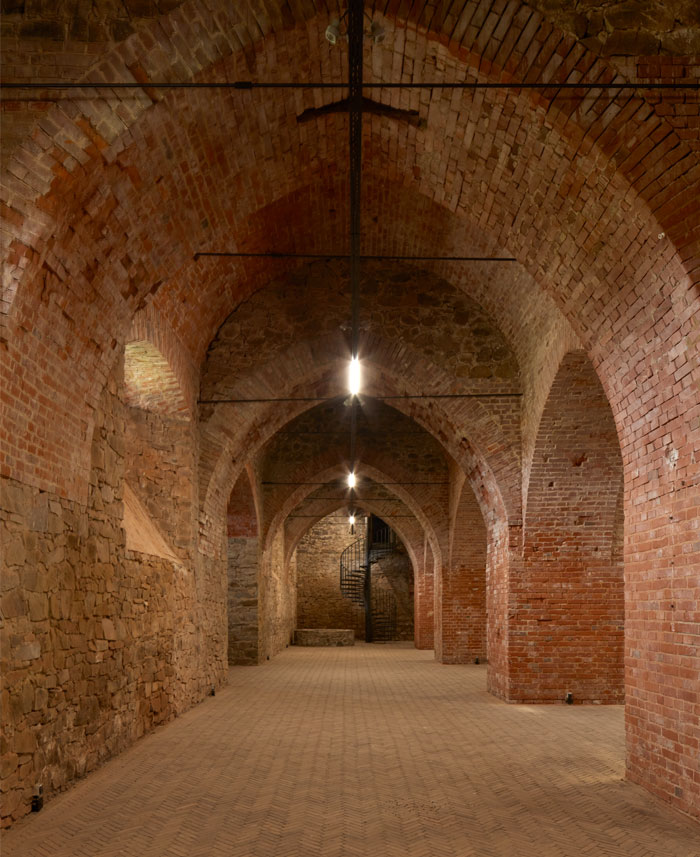 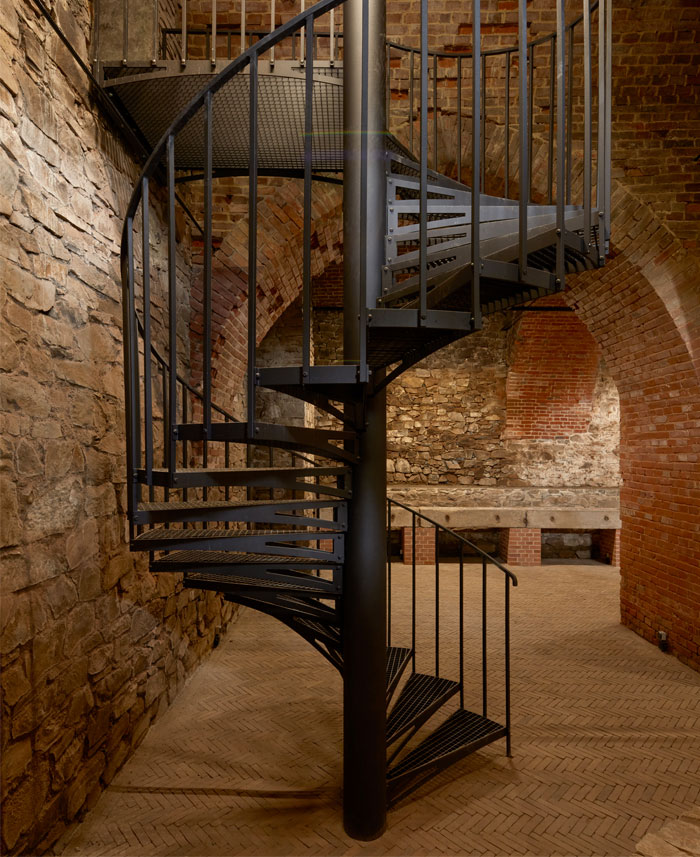 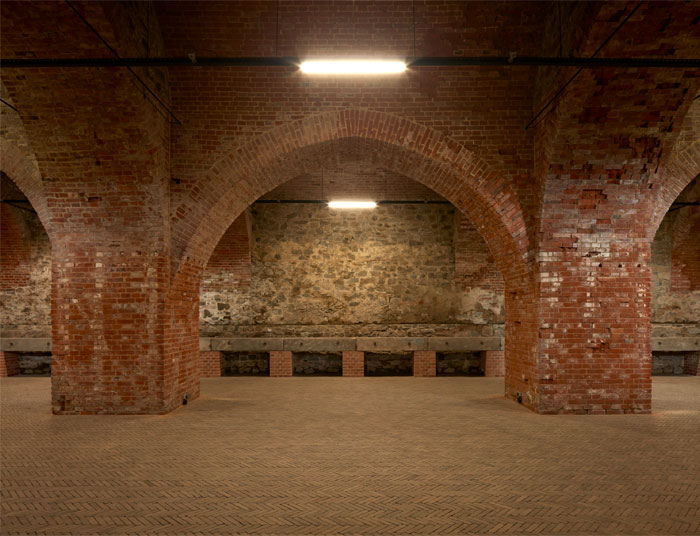 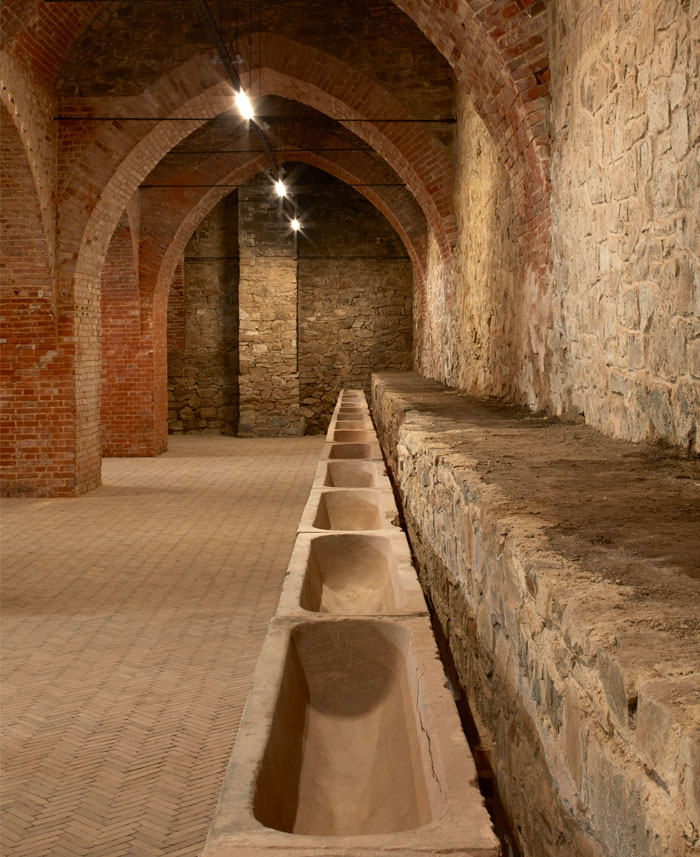 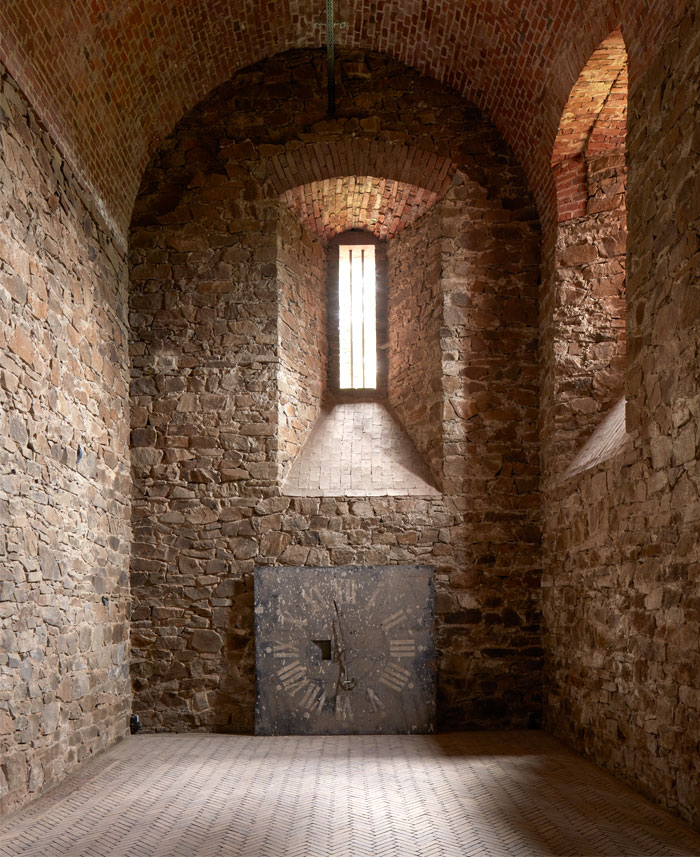