Nowadays, workspace is no longer merely a space for working, but also a place that accommodates people’s career, dream, life, communication, frustration and growth. What kind of workspaces can enable us to have some of the best time of our lives? Byton’s Production Base Office in Nanjing gives an answer. 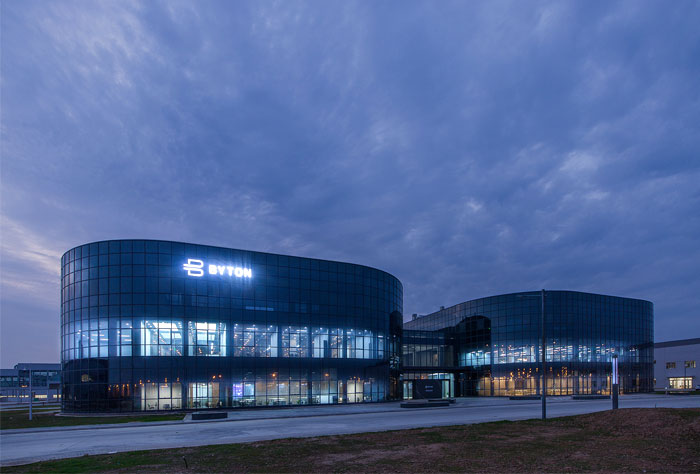 Byton is an all-electric automotive brand, which recently unveiled M-Byte — its first premium smart electric SUV at Guangzhou International Automobile Exhibition. Previously, the brand had held a series of small-scale events in several Chinese cities to showcase the digital charm of M-Bite to automobile fans. 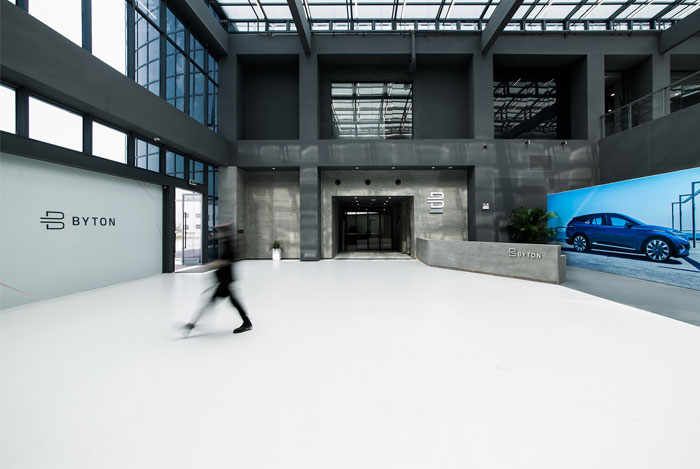 The event in Nanjing was held in its office building of the production base. inDeco approached the interior design of the new office, which well fits into Byton’s attributes and spirit. This was the second time that Byton entrusted inDeco to conceive its offices, after the Nanjing Headquarters. 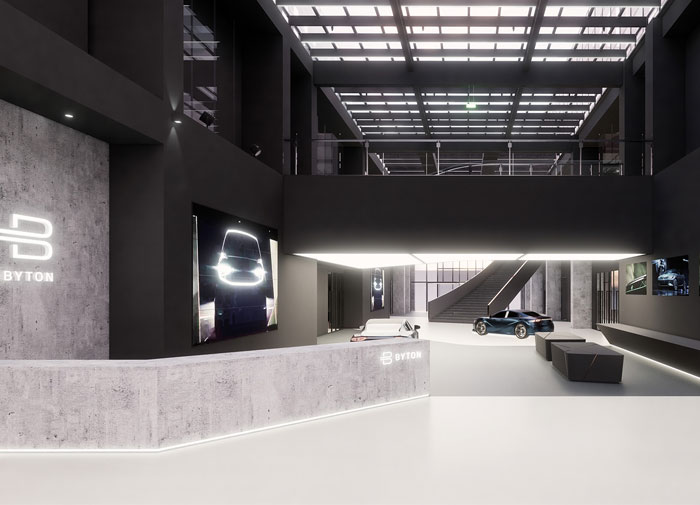 In 2017, inDeco delivered interior design and construction solutions for Byton’s Headquarters office in Nanjing. Because of the excellent design concept and its successful execution, the headquarters presents a standard image for Byton’s workspaces and has obtained wide acclaim in the industry. As approaching this project, i.e. Byton’s production base office, inDeco followed the headquarters’ design concept and visual impression. 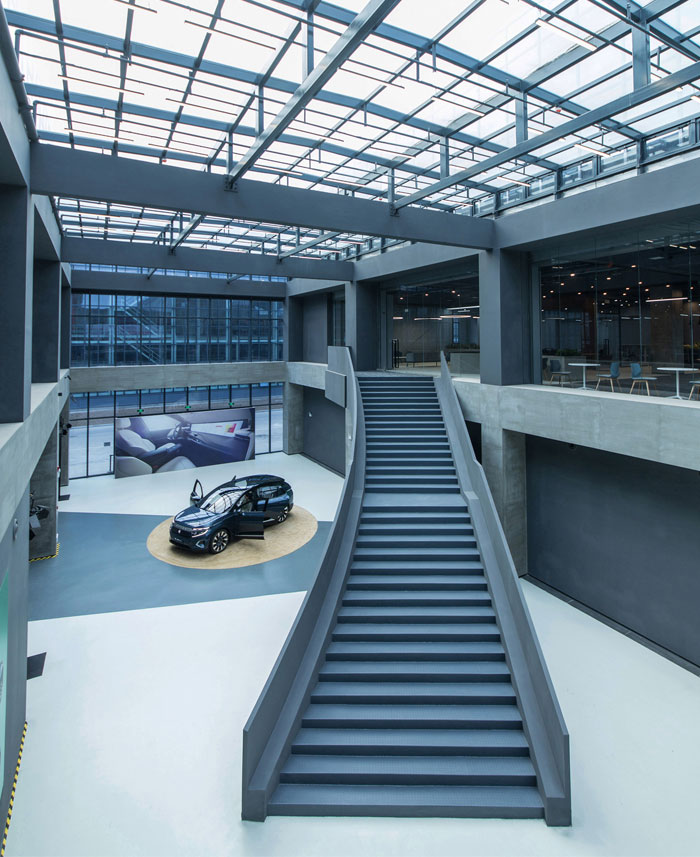 The designers took “tracks” — an abstraction of tire tracks, as the design concept, which is a design thread running through the entire space. Through drawing on flexible urban spatial pattern and vehicular transportation network, inDeco made the large workspace resemble a small city, which is filled with vigor and connectivity. Byton’s logo, the abstract “tracks”, as well as the material palette and color scheme specific to Byton, together form the space’s overall visual impression. What Byton tries to do is not just innovate automobiles but make people’s life more enjoyable. Considering this, inDeco created a space more than for working, which also provides a new lifestyle. 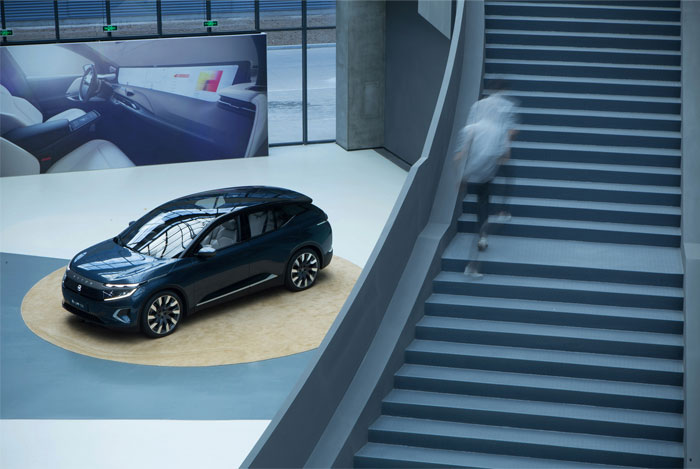 The office building consists of three storeys, with an atrium dividing it into two independent parts on the north and south sides. Situated at Byton’s production base which is far away from the downtown area, it doesn’t merely serve office employees, but also all the staff of the production base. 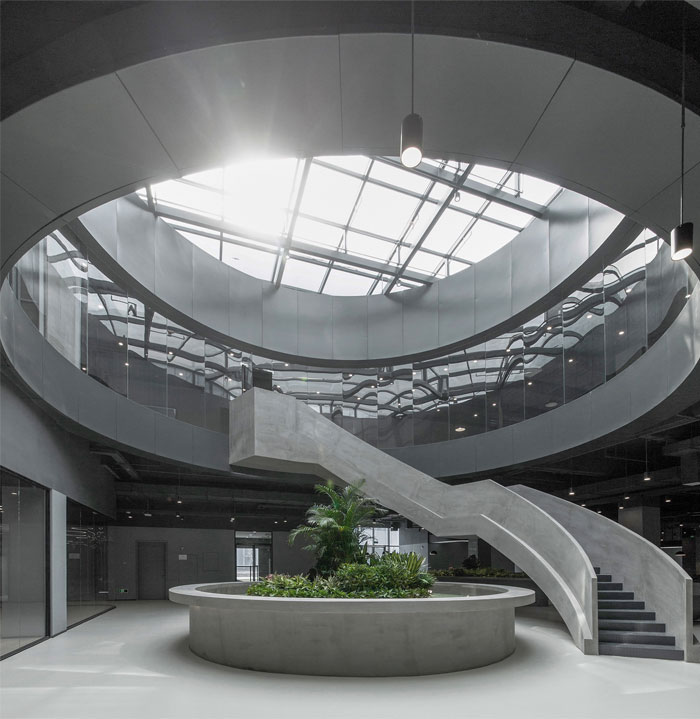 Considering that the architectural space needs to be adaptive to changes and provide an ideal venue for collective or independent activities, inDeco figured out a clear functional division. The first floor is an open multifunctional space, which accommodates canteen, shop, infirmary, yoga room, display hall and spaces for meeting and negotiation, while the second floor is mainly used as an office area. 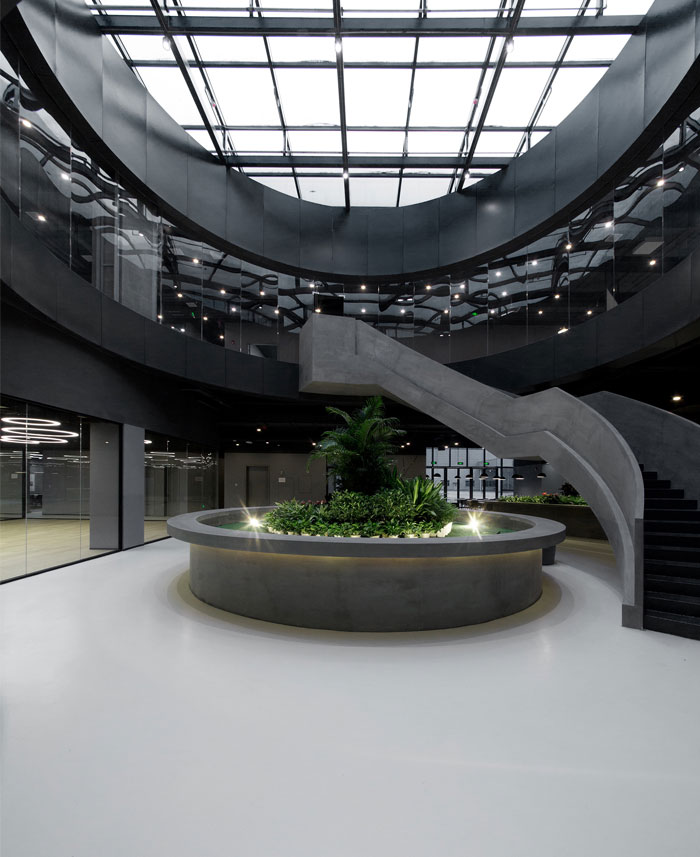 The whole display hall is characterized by smooth lines and abstract “tracks”. The light leaves distinct shadows and traces at different times, making the interior charming. A sweeping staircase extends upwards, outlining a vertical trace. In addition, large areas of the space are dominated by cement-like hues, which endow the space with a minimalist industrial style. In the display hall, a static space is transformed into an intimate experiential space, which serves for multiple purposes, such as communication, learning, and display. 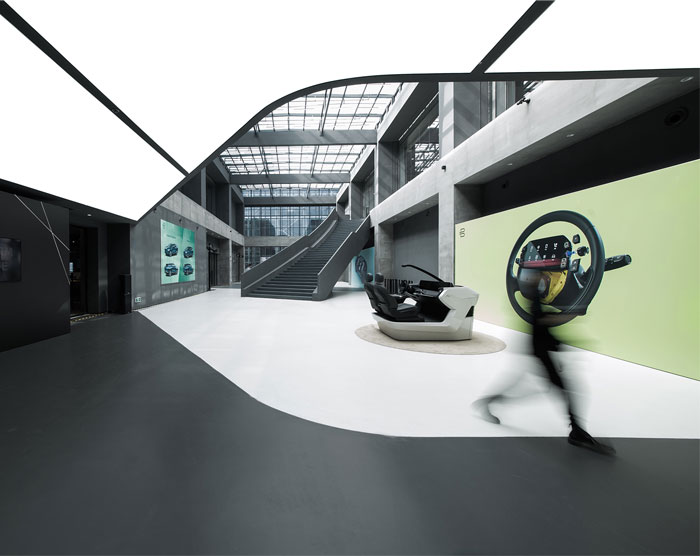 Some people think that “reconstruction” is a neutral word, which indicates unknown and challenge. But for inDeco, “reconstruction” is the start of innovation, and the key to transformation. As opposed to adopting a conventional staircase solution which usually arranges the stairs in a relatively hidden manner, inDeco set a staircase in the atrium and made it a visual highlight within the entire space. The staircase not only enhances the direct connection between 1F and 2F, but also creates a ton of visual tension. It turns the space itself to be “tracks”, which will be imprinted in people’s memory. 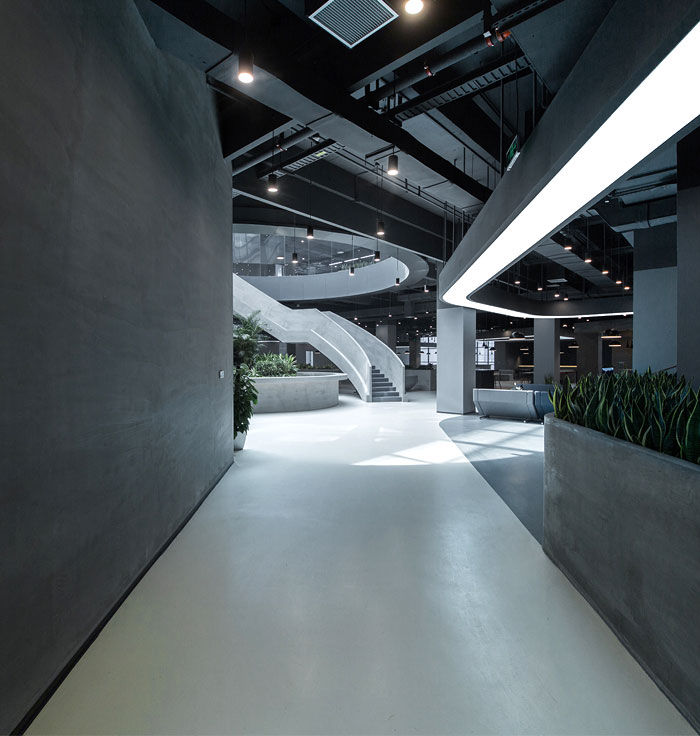 In order to let the busy employees feel the change of time as well as light and shadows, inDeco created a huge skylight above the end of the staircase. Natural light freely filters in, turning the office building into an experiential space that integrates nature, architecture and people. The area at the top of the staircase and around the atrium embraces ample daylight, which was made to be a unique versatile zone that combines the functions of resting, talking and entertainment, etc. 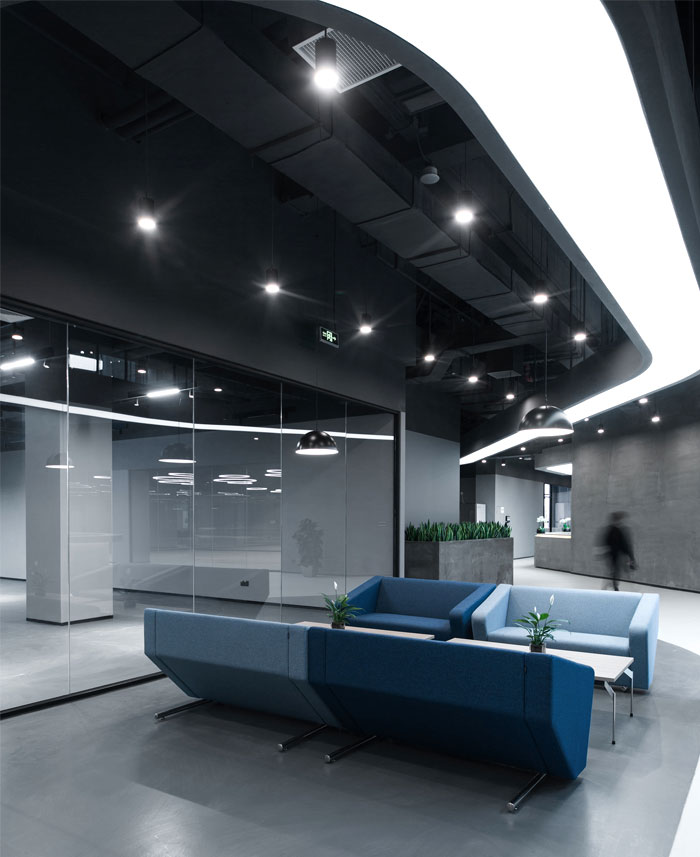 The leisure area is arranged at the central area on 2F, which is like a “city center”. Circulation routes converge in this area, and the employees socialize there. The circulation spaces and socializing zones within the leisure area are blended and interwoven. Such an open and relaxing environment creates opportunities for the staff to socialize, hence enlivens the atmosphere within the company. 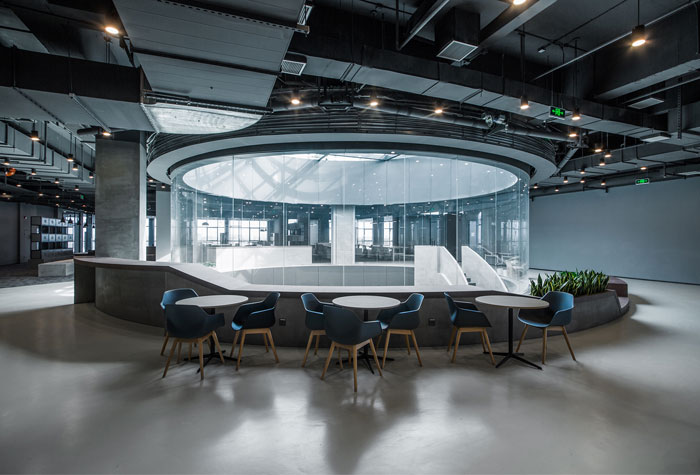 Diverse yet flexible combinations of furniture inject vitality into the space, and make it available for private one-to-one talk or group discussion. Or, the employees can find a single sofa at the corner, sit down and do nothing, just staying alone for a while. 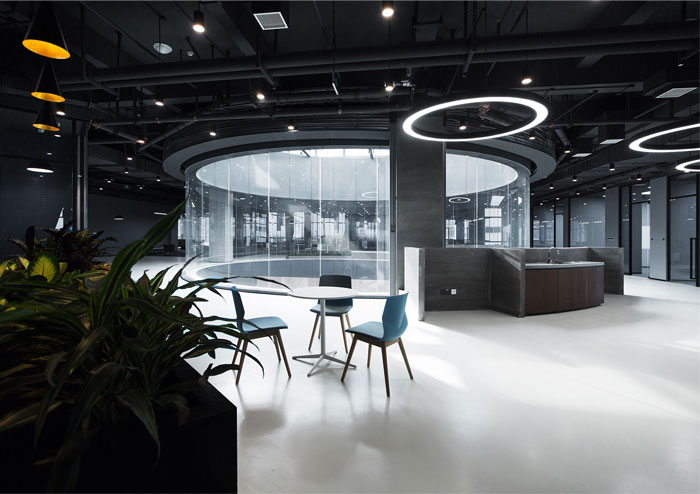 The design of this area follows Byton’s office culture, which aims to spark inspiration and improve working environment. It’s an office zone full of lines, flexibility and freedom. The open working area presents a modern aesthetic, and provides smooth sight lines. The ceiling and walls are geometrically segmented, overlapped and reorganized, which appear disorderly but in fact are given a kind of hidden order. Through subtle spatial organization and functional division, inDeco endowed the whole office area with new vigor. 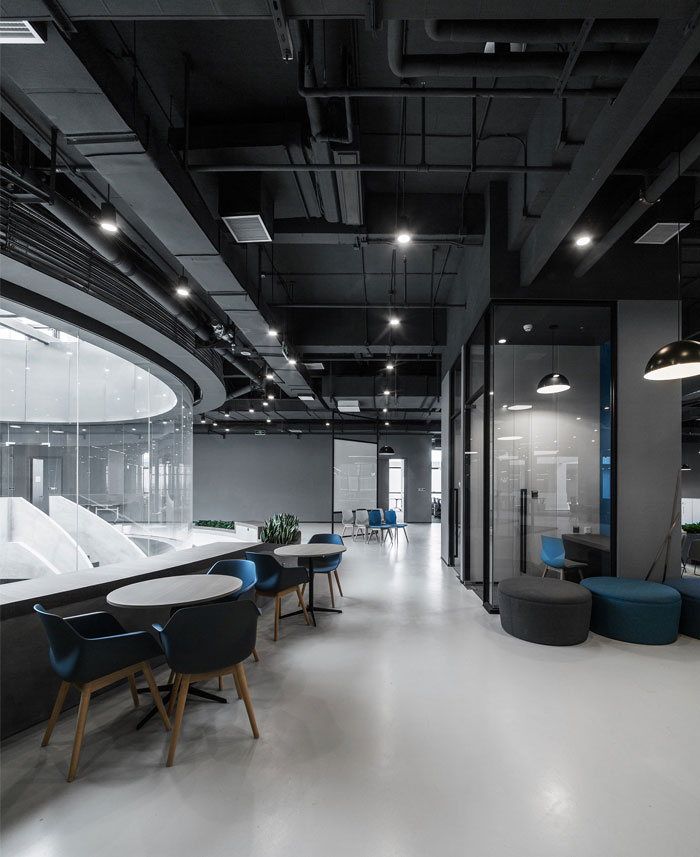 Movement tracks of automobiles are products of modernization. And ink marks of the traditional Chinese ink and wash painting on the ceiling also present a form of “tracks”, which represent the classy aesthetic taste of Chinese people for several thousand years, and also highlight the Chinese genes of Byton. 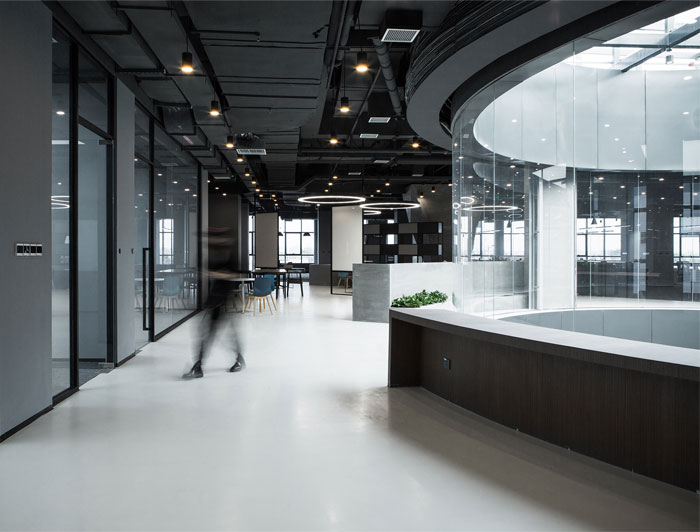 Based on China’ cultural context, inDeco interpreted tire tracks of cars via abstract ink patterns on the ceiling. Those ink patterns are accentuated by light and reflected by glass, which generates illusionary visual effects. In this way, inDeco perfectly obtain the collision and fusion between the modern space and traditional artistic ambience. 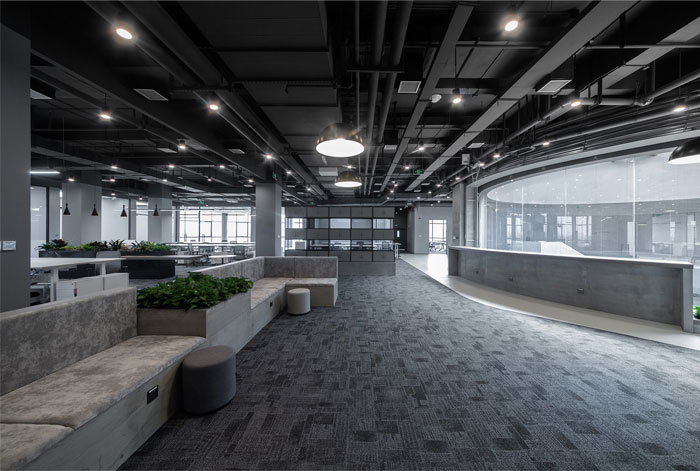 The unveiling of Byton’s M-Byte marks that the new product will enter the stage of mass production. It’s expected to be launched in the market by 2020, which will open a new chapter of all-electric automobiles. inDeco will keep striving to delivering solutions in a more efficient and quality way so as to create more value for clients, and will continue the efforts to facilitate the development of one-stop design & decoration industry via digital and intelligent means. 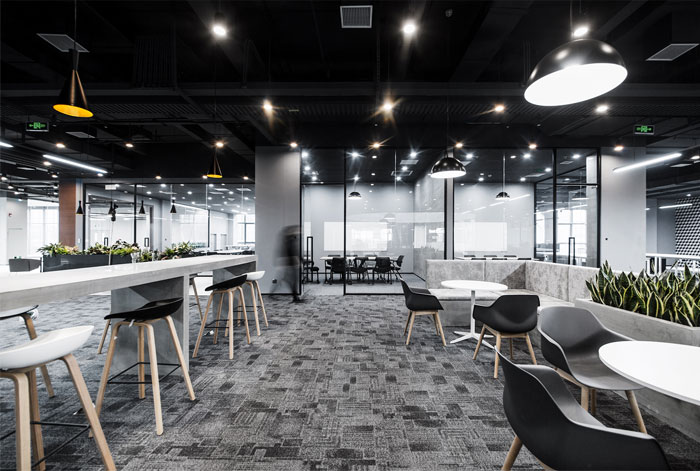