Ajitama Ramen Bistro is a restaurant born out of the dream and ambition of two friends in love with this traditional Japanese dish. After their journey in Japan, a long friendship was reinforced by this passion and search for the most authentic ramen in Lisbon. Unlike other European countries, Ramen in Portugal was an unknown concept until a few years ago. The two friends weren’t satisfied with the existing Ramen on offer and decided to venture into their own project together. 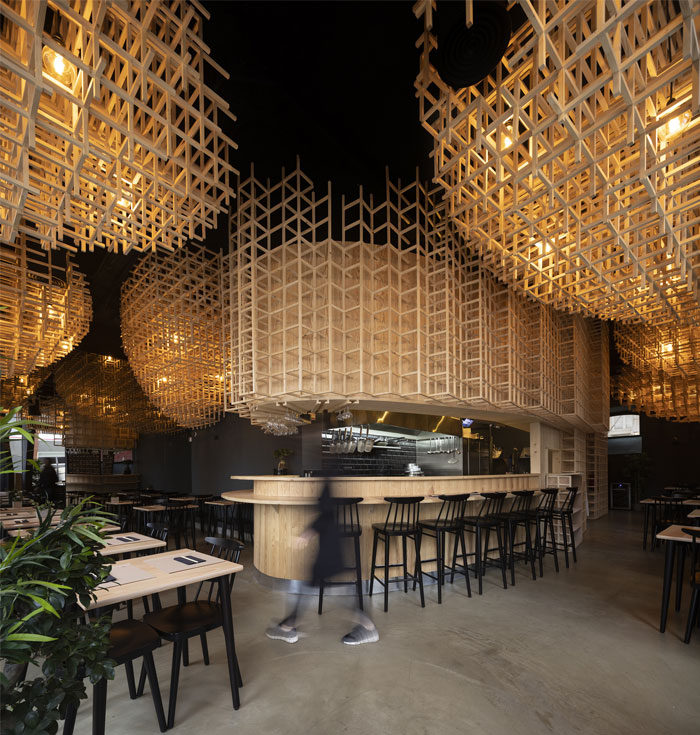 Ajitama (味たま) is the Japanese name for soft-boiled eggs that have been marinated for several hours in a homemade broth which constitutes the iconic ramen finish, the ultimate Japanese comfort food. This dish consists of a perfect combination of fresh noodles in a complex broth and a series of different toppings with high levels of Umami. It is finished with the Ajitama which makes it a sublime delicacy. 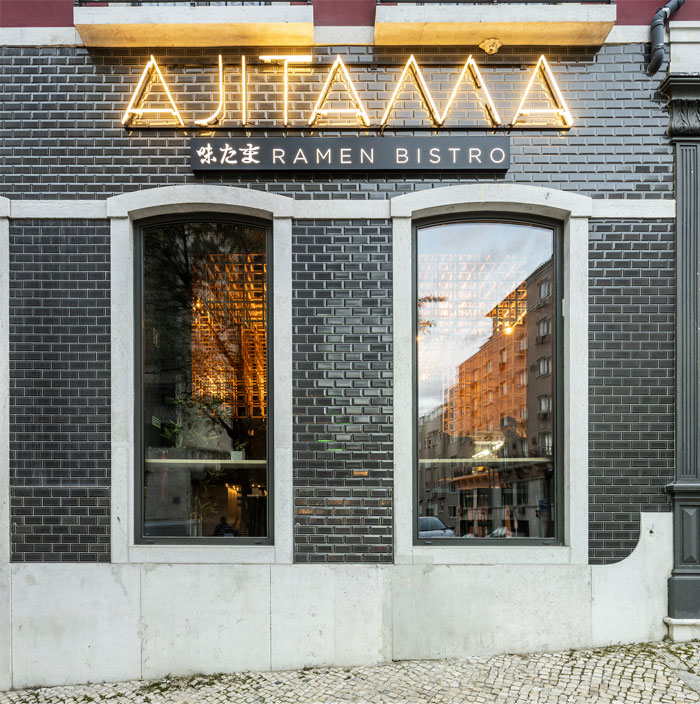 The space where the new restaurant has opened is part of a fully refurbished building, in a block dated from the beginning of the 20th century. Its location is marked by an axis of great affluence, between offices and wide avenues, occupying a prominent position in a beautiful corner. 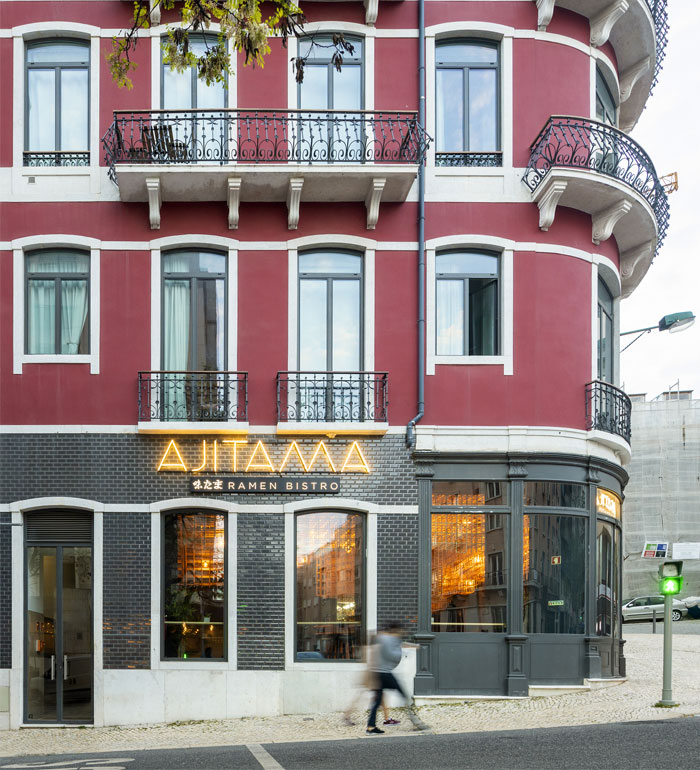 When JCFS were first challenged to develop the restaurant project, it became apparent to them the egg, the “Ajitama”, is present in everything that is beautiful, tasty and memorable and that we keep it in our memory when eating ramen made by these two friends. It therefore constituted itself as the core of all the ideas for the construction of the space. 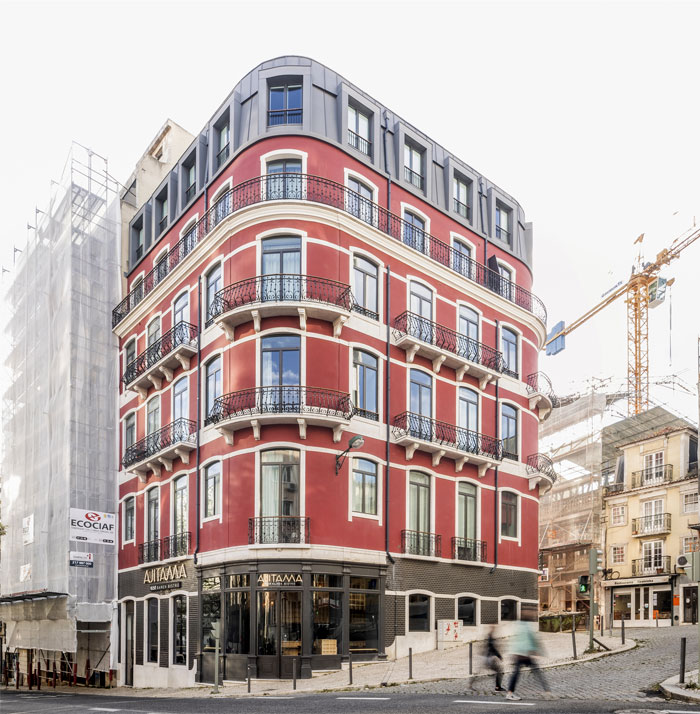 From this moment on it was necessary to conceive a space that would transport us to a Japanese environment. In this way we resorted to a material that brings us to oriental surroundings, the trellises used to construct this symbol represent the determination, precision, and organization of the Japanese people. The huge illuminated installations suspended from the ceiling defines the space, framed by the planes of the floor and the walls in a very simple shape. 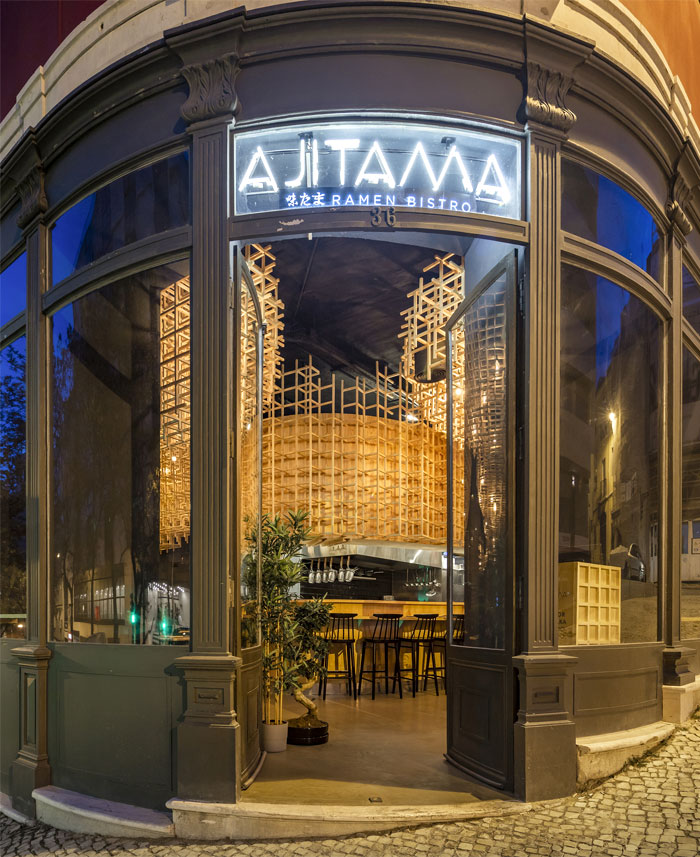 The repetition and interpretation of the egg concept is projected in these installations, counter and toilets… The result is a mixture of sensations in which the Neons of the facade transport us to the crazy streets of Tokyo, the suspended wood, sculpted in the shape of eggs confers a lightness to the space, giving us the feeling of having no end and in which the sky has no limit, the counter makes us remember the Japanese meal in its natural habitat in which we see the chef cooking this beautiful delicacy. Playing with the duality between raw / traditional and elegance, the Eastern tradition and Western representation, JCFS introduces a cross between a restaurant that is intended to be fast, efficient, practical and upscale, comfortable and memorable. Photos: Fernando Guerra | FG+SG; 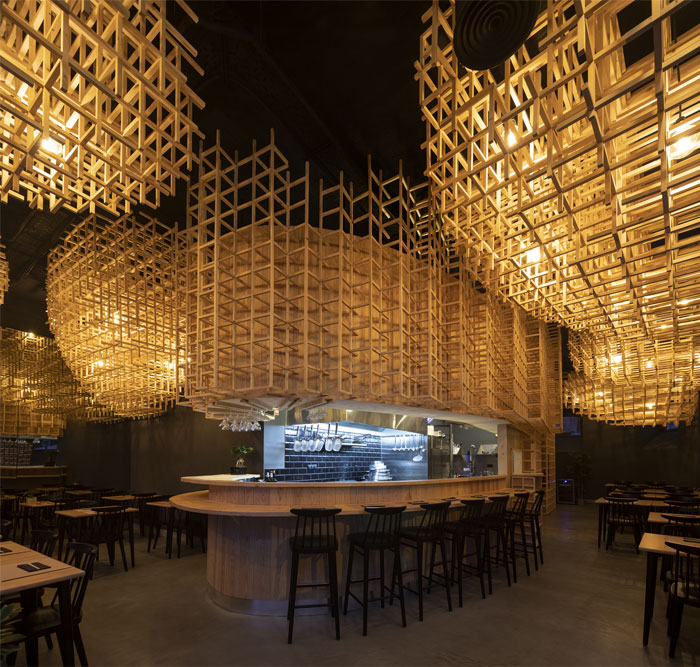 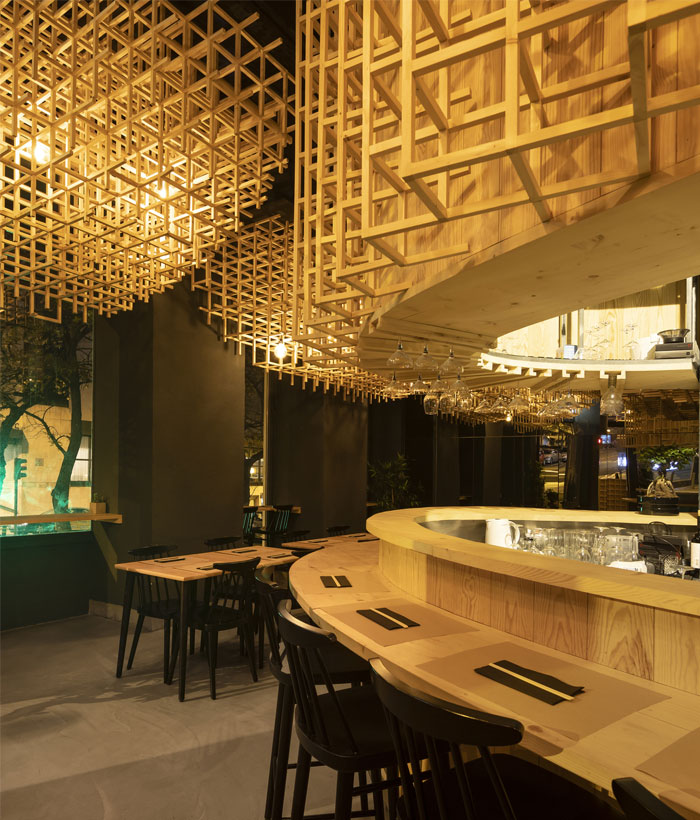 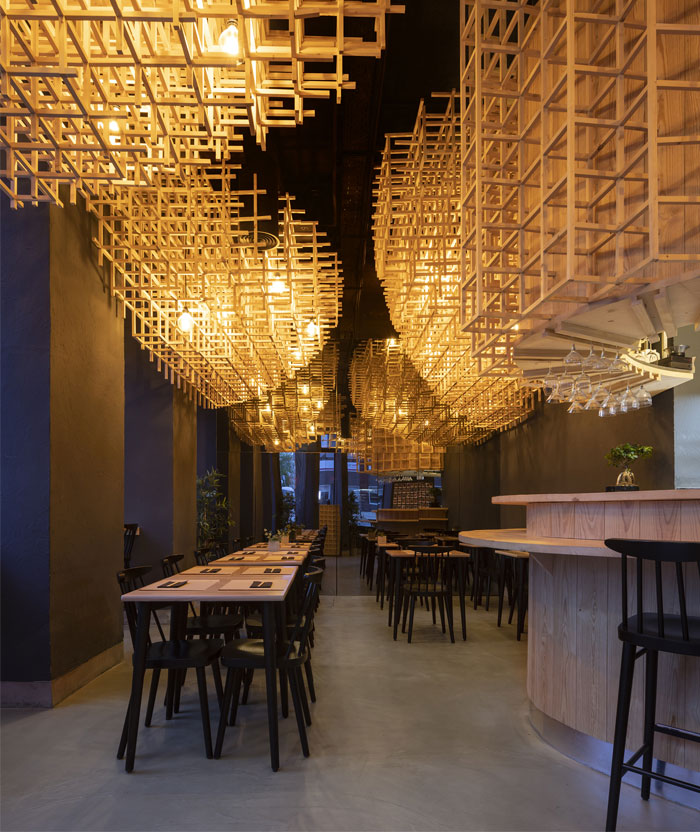 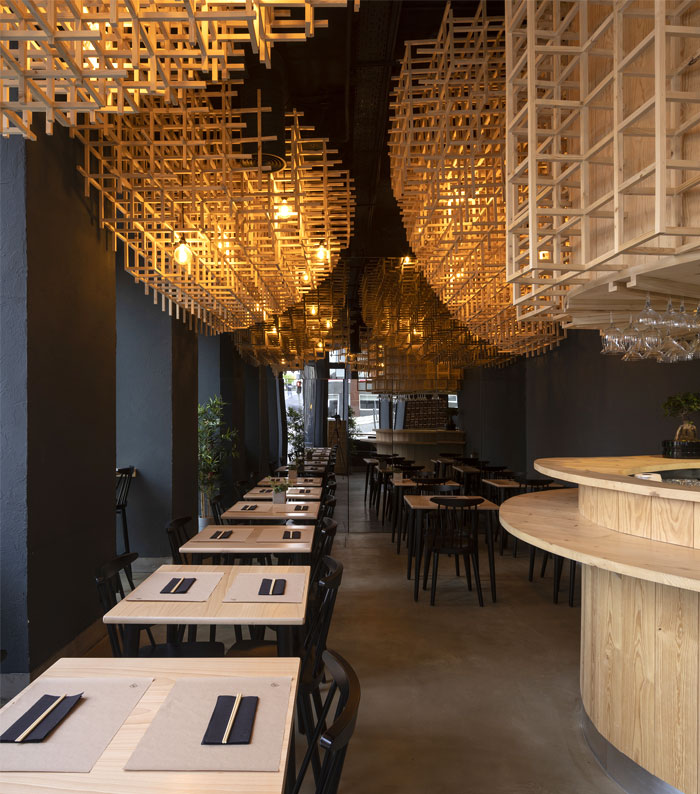 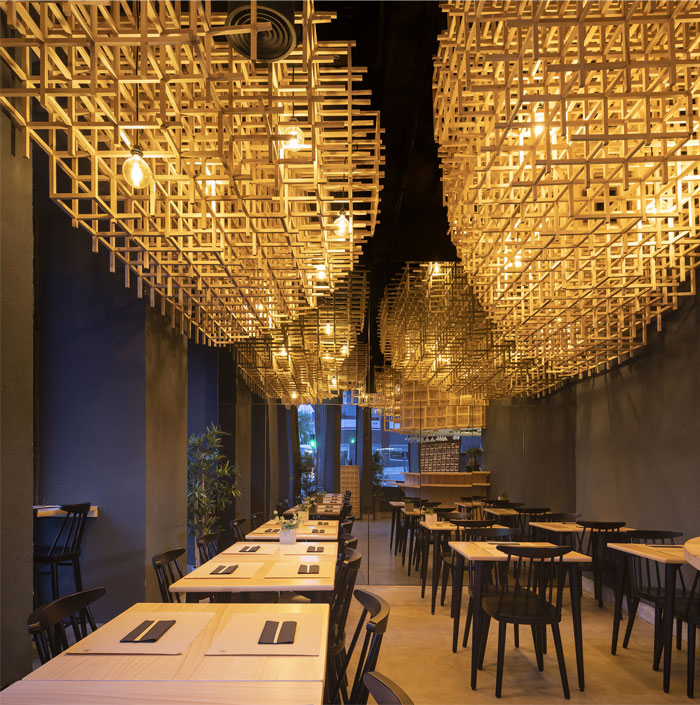 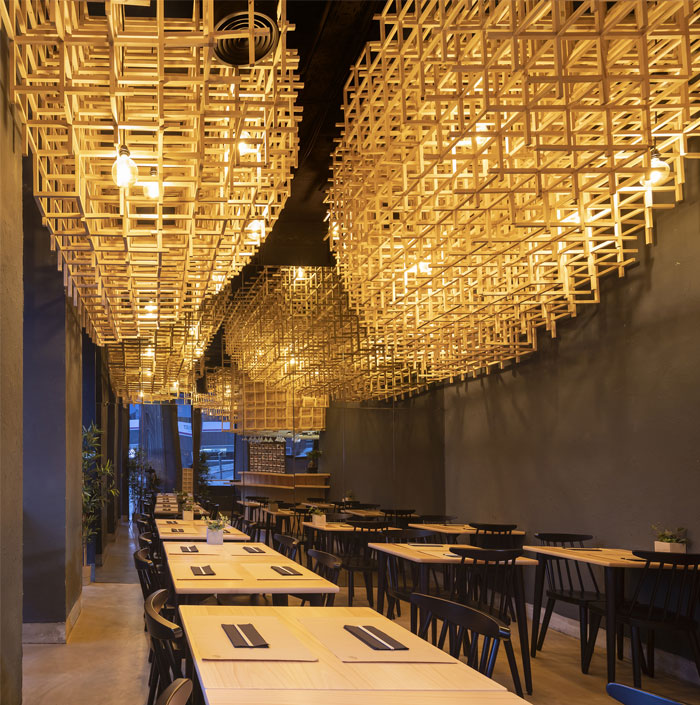 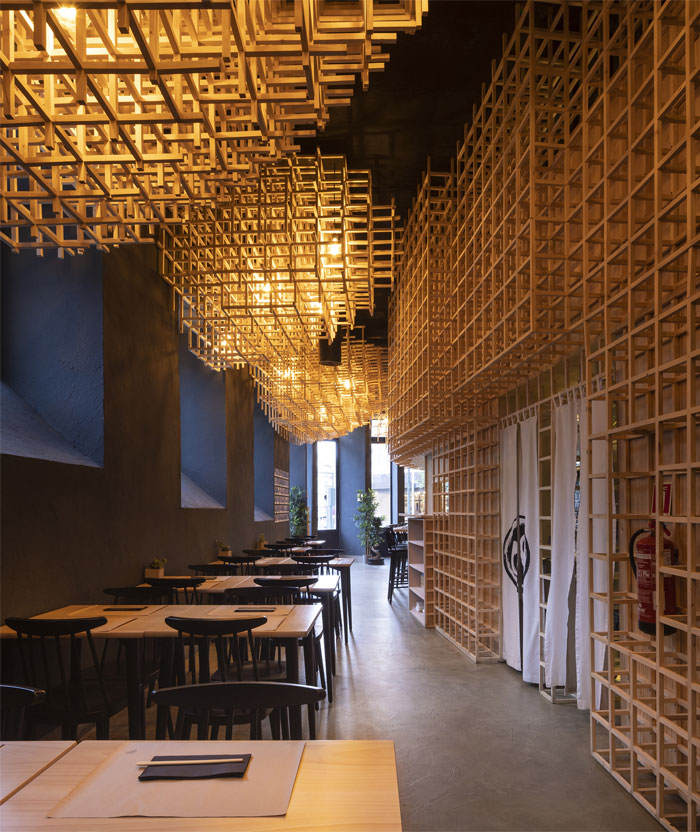 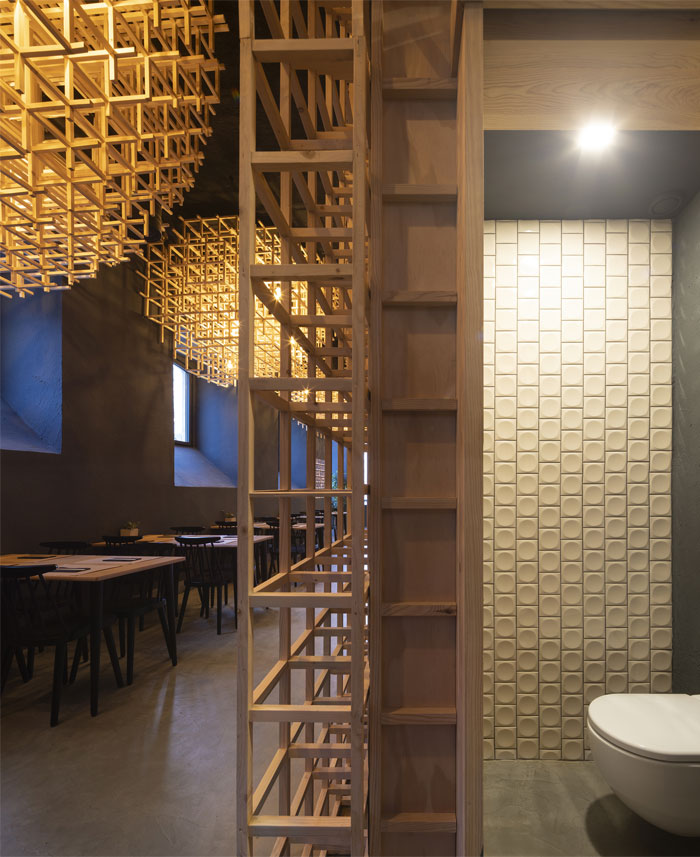 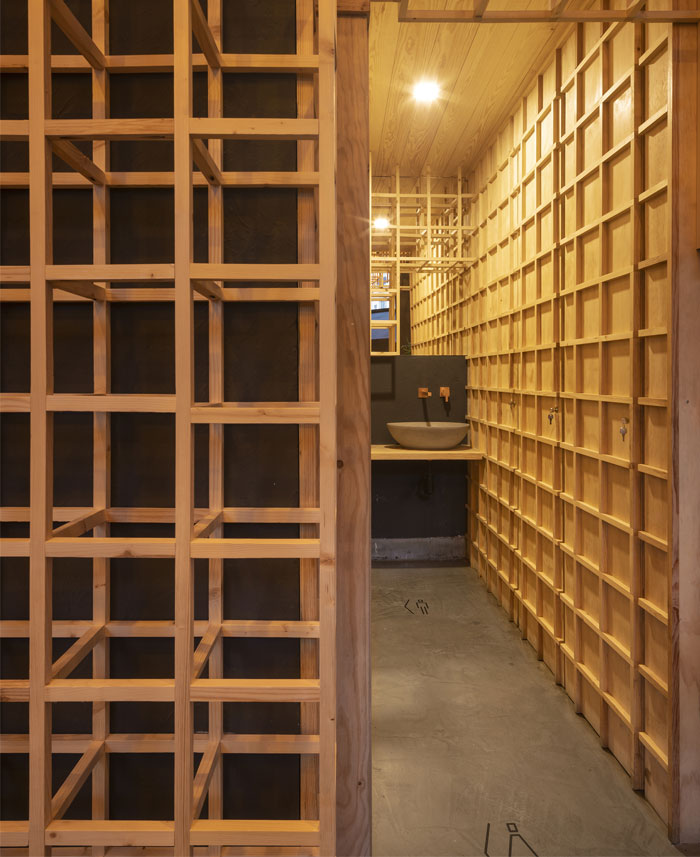