Wutopia Lab was commissioned by Fengyuzhu to design the first architectural model museum in China in the way of predicting the future city. 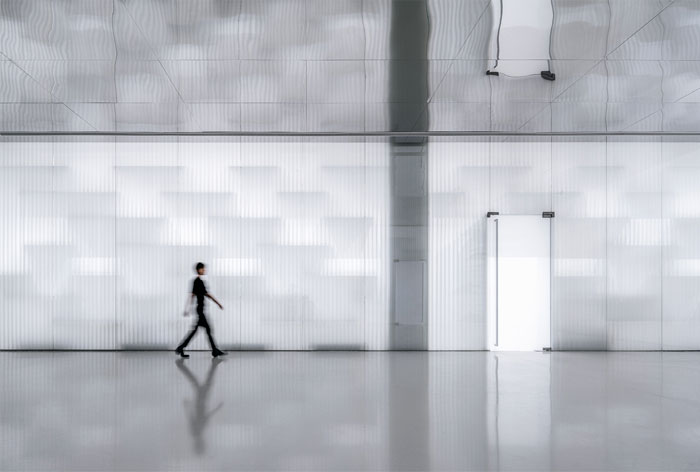 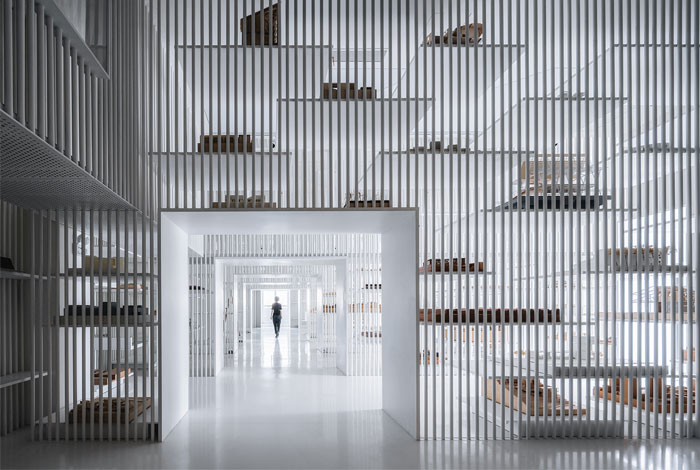 Models in Model
The client, founder of Fengyuzhu, hoped to display the architectural models of all the famous contemporary Chinese architects in this museum. His inspiration came from Archi-Depot, an architectural model museum situated at a warehouse in Tokyo. When I looked through the photos of Archi-Depot, an idea popped into my head: since the museum focuses on models of various built or unbuilt projects, if we look at these vastly different projects from a macro perspective, and ignore the difference in region and time period, they can form a world together. Therefore, I decided to make the entire museum into a mega model of future city. The collected models become different components of the future city’s fabric, with each of them divergently predicting a different future. Such an architectural model museum is truly meaningful at architecture level, and I defined it as “Models in Model”. 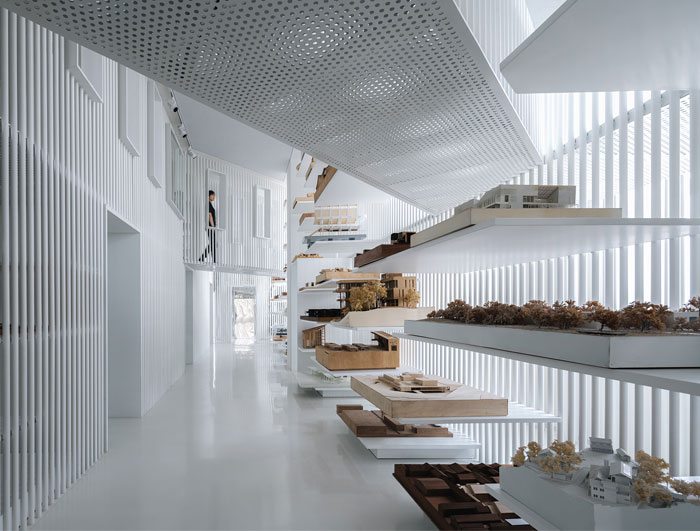 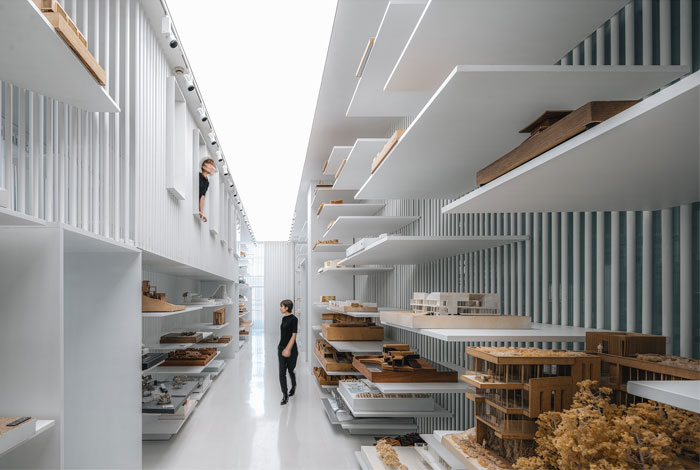 1909 Theorem
“All the comforts of the country with none of its disadvantages”
The dense models on Archi-Depot’ shelves remind me of A.B Walker’s comic quoted by Rem Koolhaas in Delirious New York, which was firstly published in a magazine in March 1909. Koolhaas thought it represented a utopian imagination of skyscrapers. In 2011, my phD thesis on vertical cities cited this part of text and image in Koolhaas’s book. I think the diversified imaginations of skyscrapers throughout Europe and North America in the early 20th century shaped the prototype of a vertical city. This inspired me to make the museum a model of future vertical city.
Zenobia, which was completely built on high stakes mentioned in “The Light City II” part of Italo Calvino’s book Invisible Cities, helped me determine the basic structure of the future city. I hope the models, as a part of the future city, will float above its interface, but I don’t want to literally picture this future city. To highlight architects’ physical models, the city should be abstract. Eventually, I decided to build this future city with high round rods with a diameter of 32mm as basic elements. I named the future city The Last Redoubt, which is derived from The Night Land, a science fiction published in 1912. 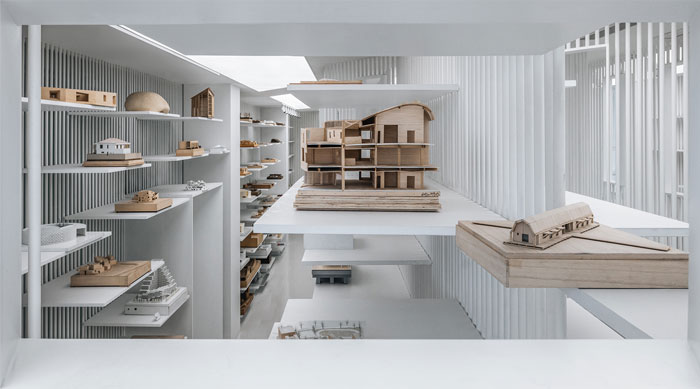 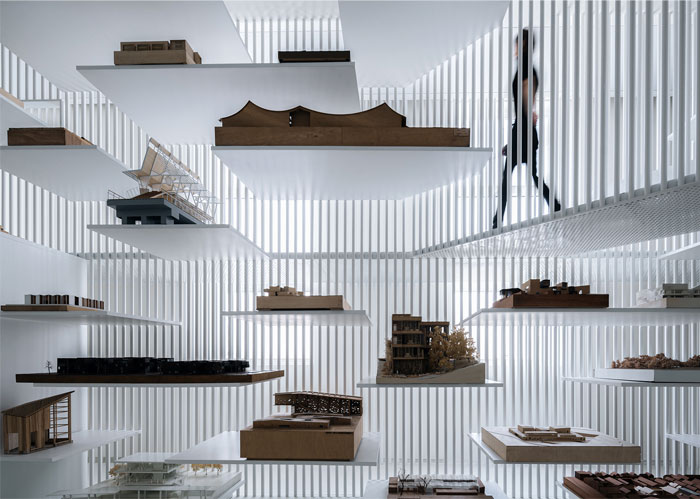 The Last Redoubt
Construction of Invisible Structures
A total of 5,653 steel pipes were used to build the vertical city of Last Redoubt. I made structural and decorative pillars uniform in size and visual impression, to deliberately weaken the existence of the structures. These continuing steel pipes together form a rhythm and compose interfaces that partition different areas in the vertical city.
The design of the Last Redoubt fully considers both human and model scales. From a model scale perspective, the Last Redoubt has a height of more than ten levels, with all the model plates cantilevered and welded on the round bars. Different models are located on the supporting plates at different heights, collectively shaping the form of the Last Redoubt. On a human scale, the museum has a mezzanine that spans across all exhibition areas. The mezzanine is suspended by white round steel tubes with a diameter of 32mm. I hide the mezzanine between interfaces formed by steel bars, in order to avoid visual conflicts between the two scales. Visitors can walk between models in a vaguely visible way and observe them, which forms an important circulation for experiencing the museum and constitute a part of the overall model — the Last Redoubt’s three-dimensional traffic system. 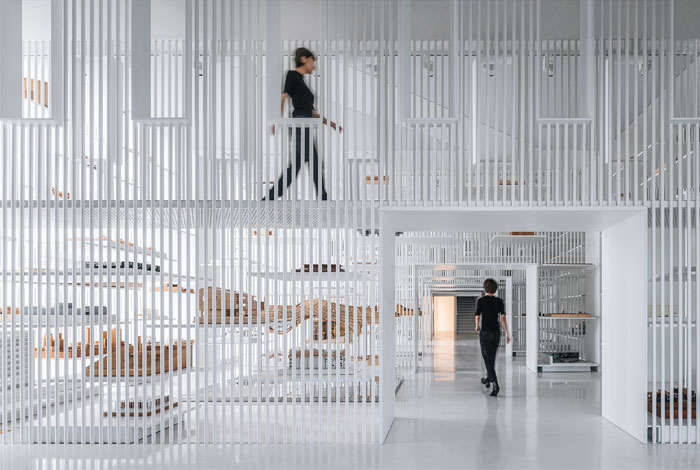 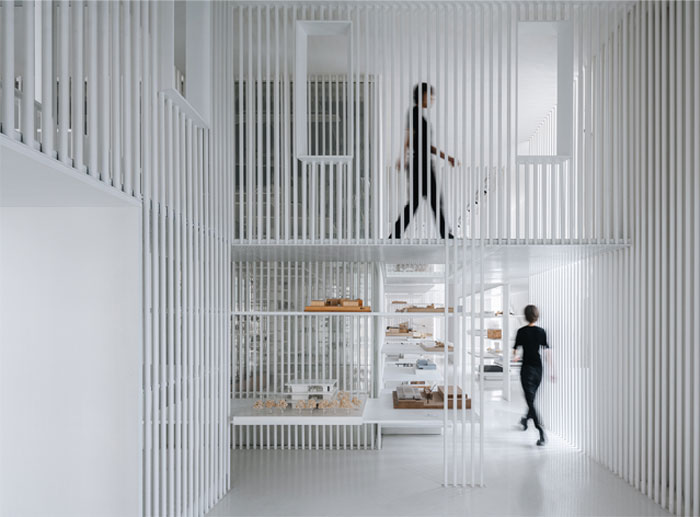 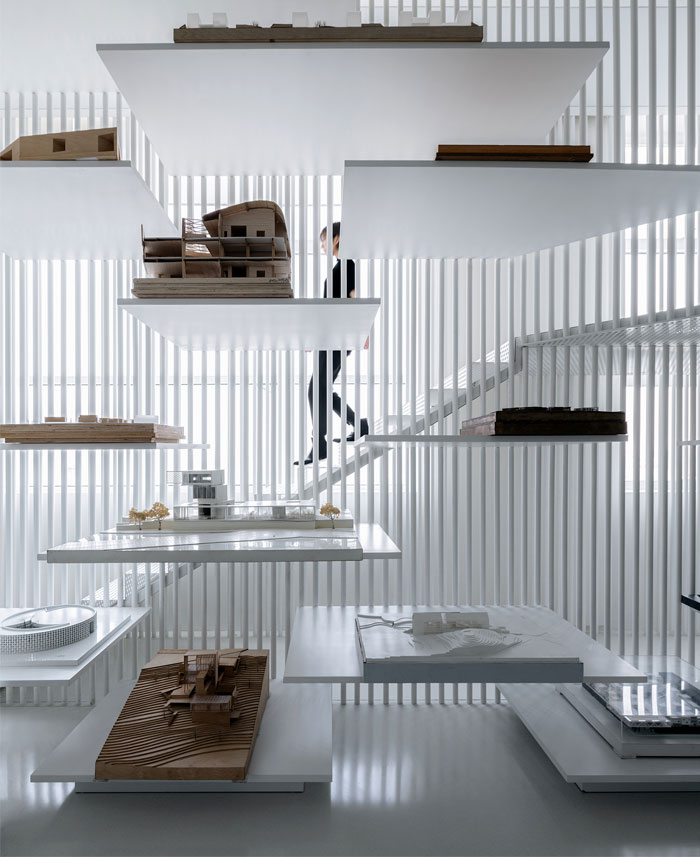 Acropolis
The entrance hall is called Visionary City, which is named after a fancy painting of the future city created by American painter William R Leigh in the early 20th century. Visionary City is the acropolis of the Last Redoubt, and is more like an empty wilderness. Only the Stacks (derived from the movie Ready Player One) stands alone on one side, and the architectures on it are reticent. However, when the surrounding glass is powered on, the large vertical city behind it suddenly appears, and projected shadows will pop on the ground, making the area awash with illusionary experiences a truly Visionary City. 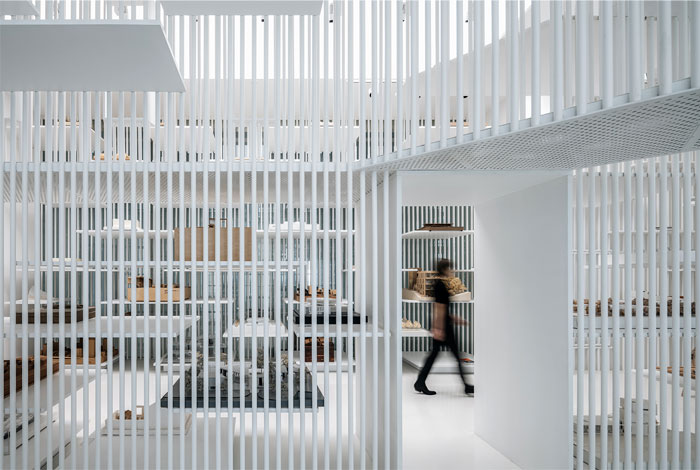 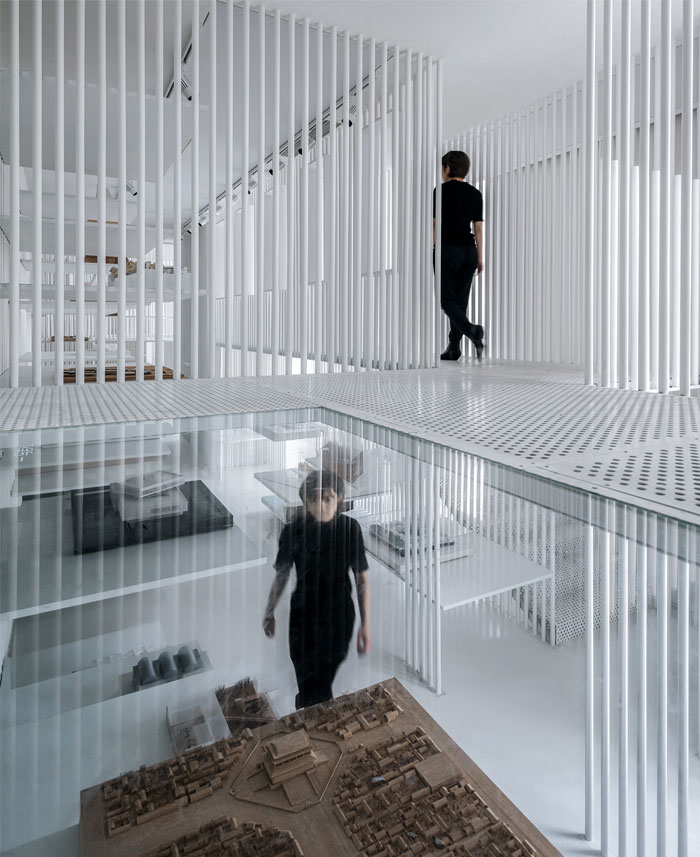 3 Main Zones
The inner city of the Last Redoubt, i.e. the museum’s main exhibition area, is divided into three main sections, including Tijuana (from the movie Cowboy Bebop), Ironia (The name is derived from the City of Iron in the movie Alita: Battle Angel. And I shorted and transformed “City of Iron” to be “Ironia”) and Pod bay (2001: A Space Odyssey). Tijuana and Ironia differ in spatial arrangement based on the original plane size, while Pod bay is like a plaza in the city, which is also the intersection of Tijuana and Ironia. 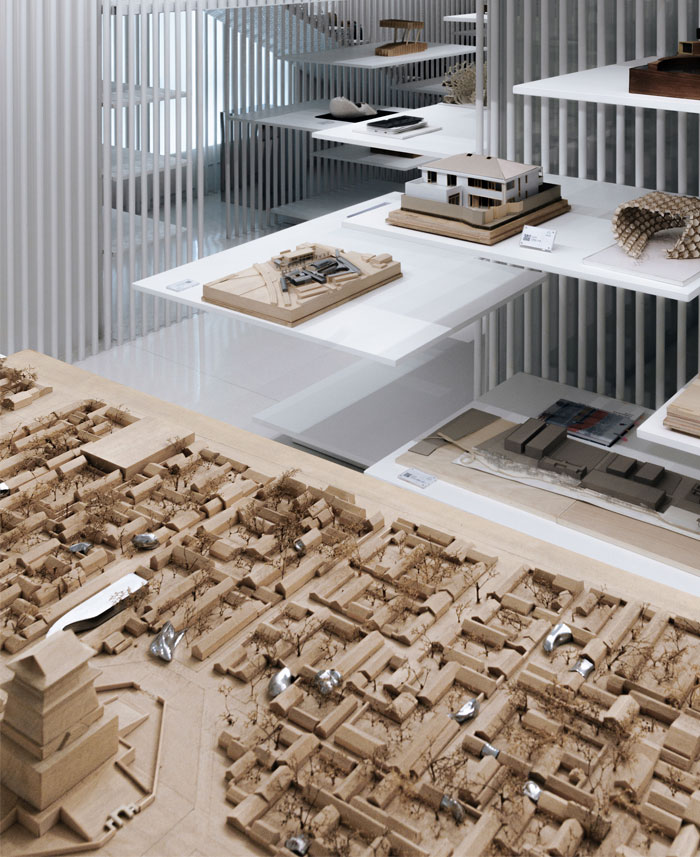 1 Pantheon
There is a circular space in the southwest corner of the original plane. We decided to use it for VR show, rest or communication. It is the only socializing space in the museum, like the city’s Pantheon. Although I named it The Thunder Dome (from Mad Max), it is a peaceful place filled with divine light. 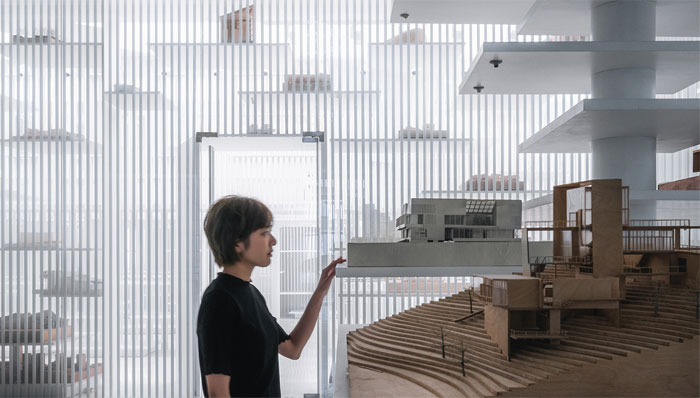 Unexpected Tribute
On the side of the dome is the staircase that leads to the mezzanine. I had originally intended to turn the space downstairs into a storage room. But when I stood in this room, I saw the perforated floor slabs which were originally designed just for reducing the weight of the mezzanine letting light penetrate the holes and filter into the room. The light touched me, so I decided to make this room a special exhibition hall, which was named Tyrell to pay tribute to the great Blade Runner. 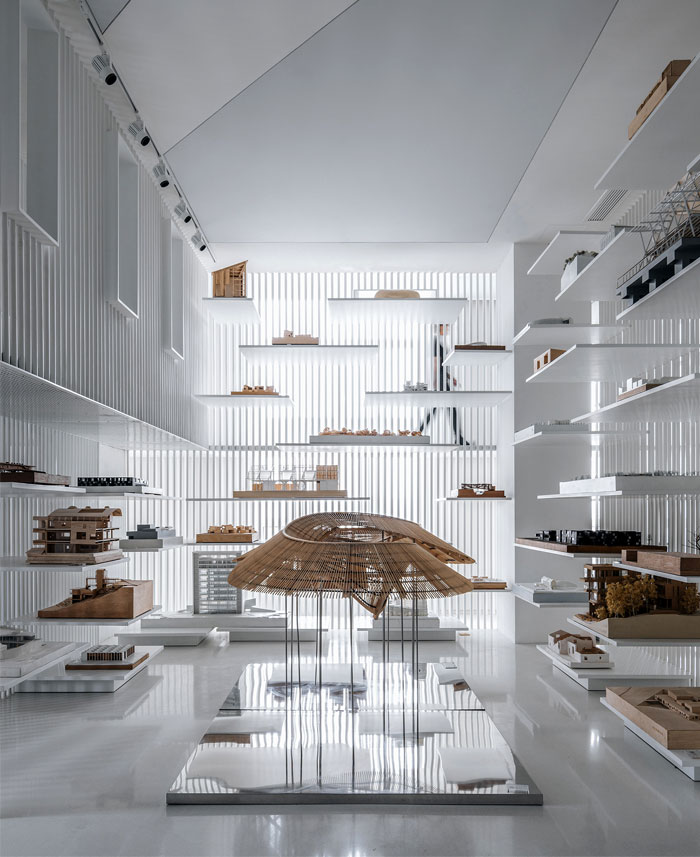 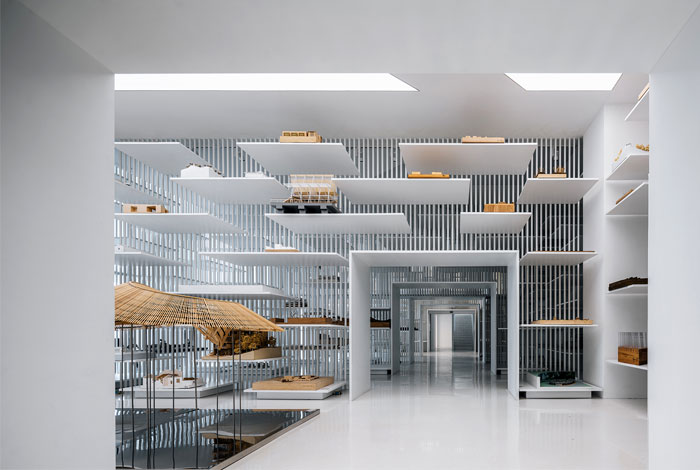 3 Sacred Spaces
The Last Redoubt was embedded onto the original irregular plane as a complete square city, which left some fragmentary corner spaces on the plane. I marked those three spaces as special exhibition spaces in red, yellow and blue, which also function as sacred spaces of the city to connect the Last Redoubt (i.e. the architectural model museum) with the real world. Red, blue and yellow respectively represent Olympus (Appleseed), Asgard (Thor) and Arrakis (Dune). In fact, those colors symbolize one thing: pure spaces will eventually break through the boundaries and expand the unknown fields more magnificently to achieve sustainable development. 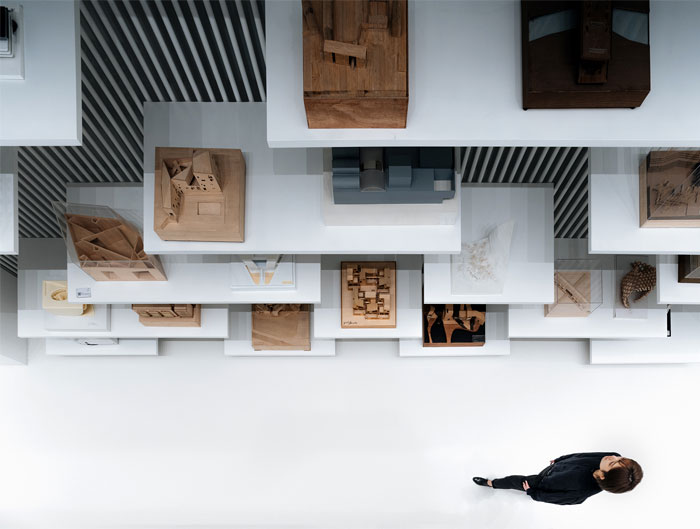 3 Harbors
There were 3 balconies on the original plane, I could have ignored them. However, I thought that any great city and civilization would certainly expand its frontier to explore the unknown. Therefore, I considered those three balconies as spaceships on the three air harbors of the Last Redoubt. They are respectively The Eclipse (Star Wars) which represents the ambition to conquer, The Covenant (Star Trek) which symbolizes curiosity and exploration, and The Serenity (Firefly) beside Pod bay that stands for courage and luck. They prove that my Last Redoubt is not the same as the Last Redoubt waiting for death in the fiction. After all, humans walked out of the fortress without fear to exploit the broader world. 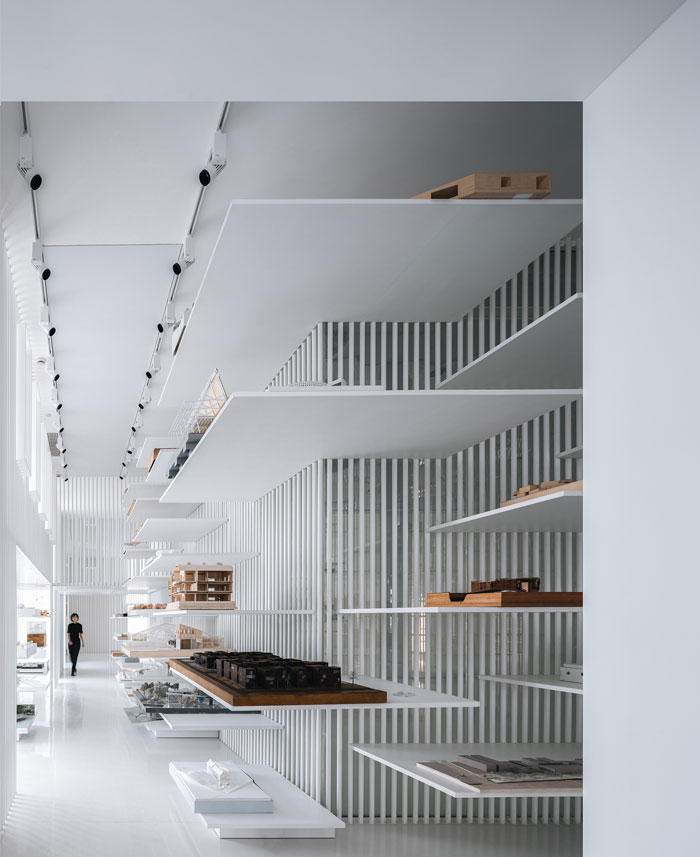 “Do not go gentle into that good night,
Old age should burn and rave at close of day;
Rage, rage against the dying of the light.” 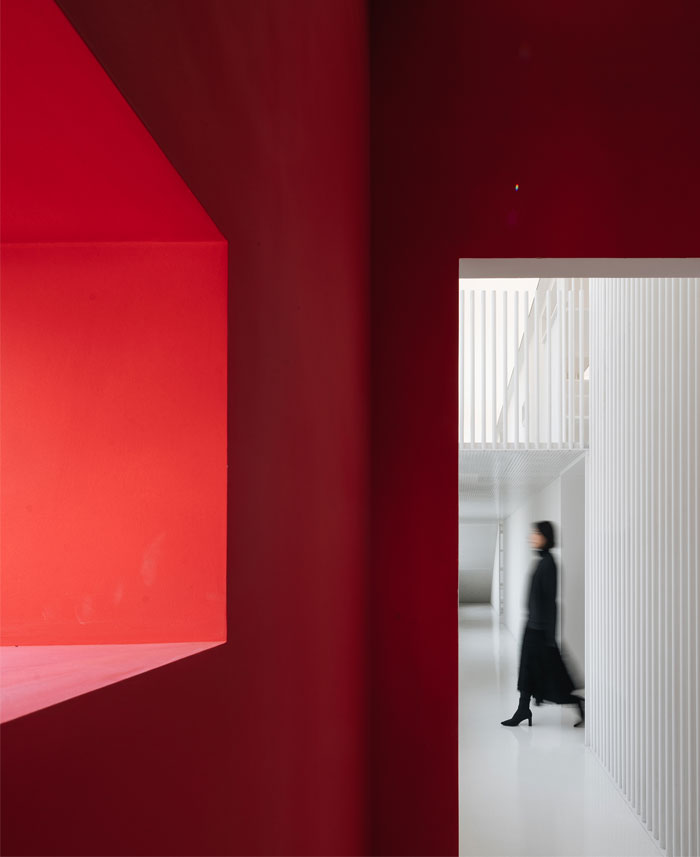 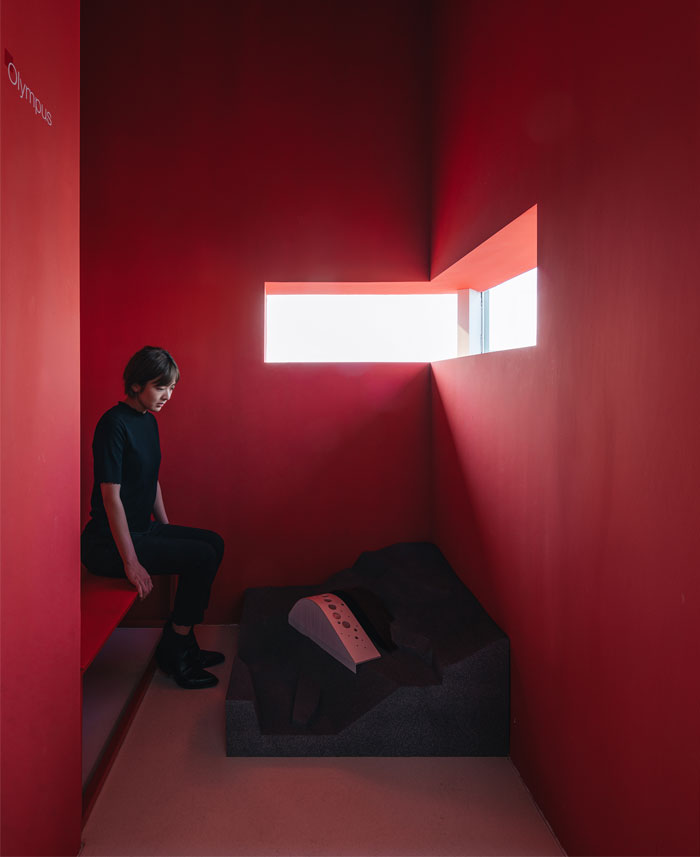 Beyond the white Last Redoubt is the Night Land. As an antithetical pair, I designed the elevator lobby to be black, as if it were dark night. The Peach Tree (Judge Dredd), i.e. the black silent city that erects in the night, is the other side of the white Stacks in Visionary City. Looking at each other across Stargate, they are two different worlds. Directly facing the elevator is a huge black digital control wall that can display information including patterns on it. It is more like Monolithic (from 2001: A Space Odyssey), implying the close relationship between the glamorous Last Redoubt behind the gate and the Night Land. 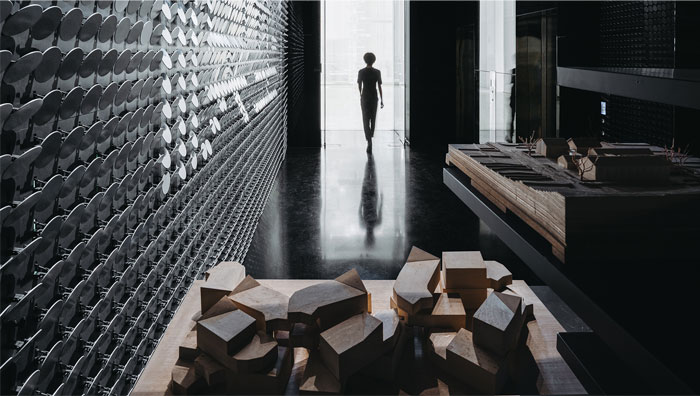 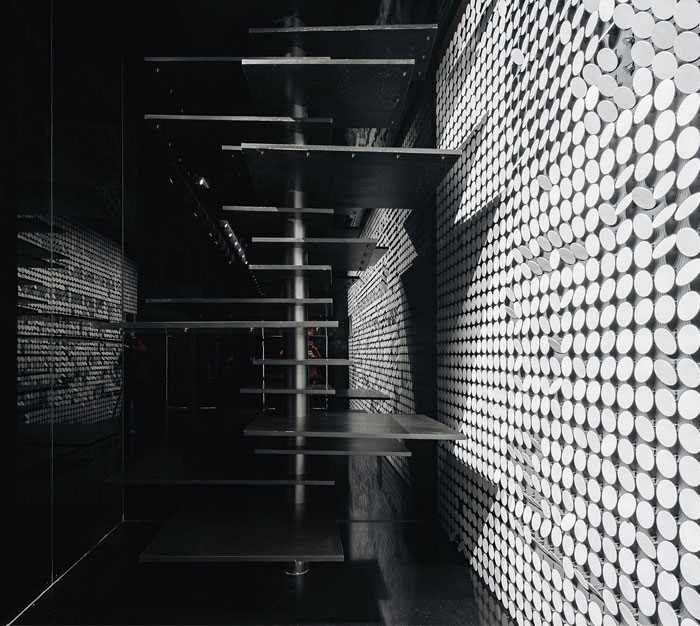 “April is the cruelest month, breeding
Lilacs out of the dead land, mixing
Memory and desire, stirring
Dull roots with spring rain.”

Manifesto
I originally wanted to use curtains to isolate the museum and make it a completely inward and intact space. However, after the round rods were erected, the sunlight filtered and fell into the museum, making it look real yet unreal at the same time. So it seemed to be possible to dissolve the entity. This deeply touched me and changed my idea.
The discipline of Architecture needs to use architectures as tools to think about the future destiny of mankind. It must face the future, and shouldn’t hide behind the shell of history, context and regionalism but need to take these as a starting point to create a more ambitious future or more humble divinities. Firmness and eternity may always be an illusion that we insist on. However, openness, temporality, diversity, chance, accident or temporary amnesia, instant inspiration, short-lived beauty and slight fragility are also worthy of attention for the profession of Architecture, and we can create something with it. Yes, I regard the architectural model museum as an architectural manifesto. 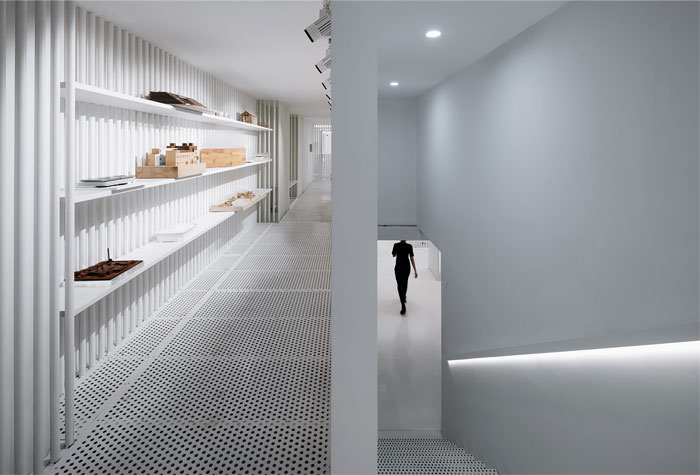 “You mustn’t be afraid to dream bigger, darling” 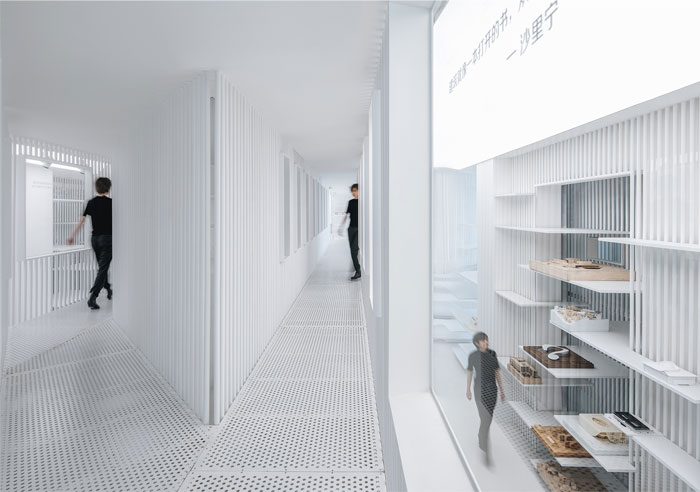 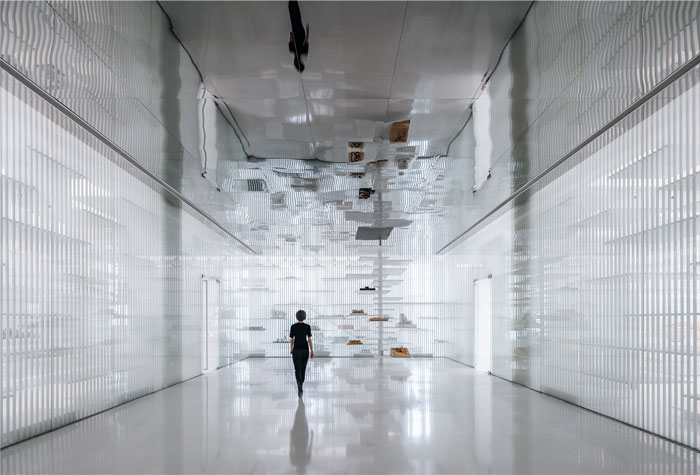