The suite houses were built on the lot of a former store from the 80s. Four of the houses are located on the „meadow“ – a green roof above the shops in the parterre of the building. The space between the individual houses offers views of the far horizons of the mountain meadows. The atmosphere among these houses is intimate but neighbourly. The roof garden covers commercial spaces and garages. 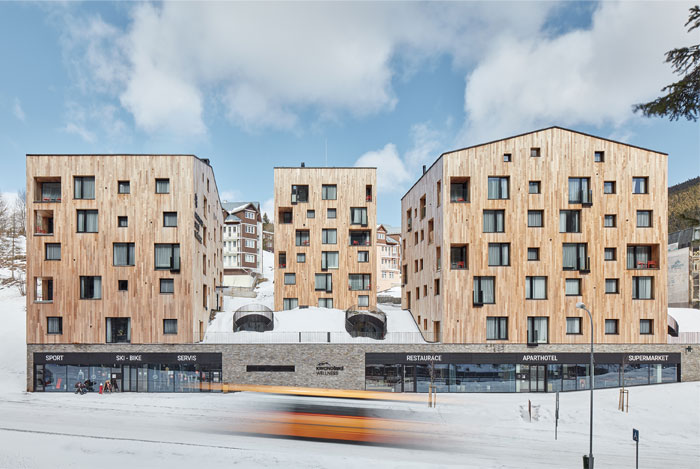 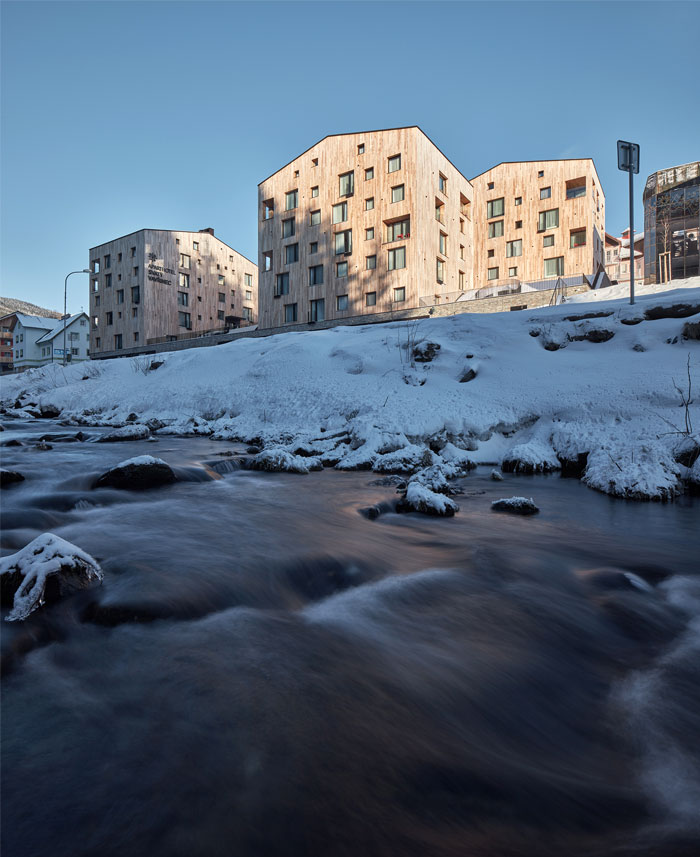 The mountain town and ski resort Pec pod Sněžkou originated from the earlier original buildings in the valley, that expanded toward the surrounding hills. Slowly, large tourist accommodation and hotels emerged. The core character of the area is shaped by the individually standing buildings along the main street that are in close contact with the surrounding nature. The atmosphere is captured by a road rising through the valley along-side streams and by the openings between houses that allow a view of the further planes of the village and the cabins scattered on the meadows. The design of four apartment buildings continues the thread of these qualities and develops and further elaborates on them. 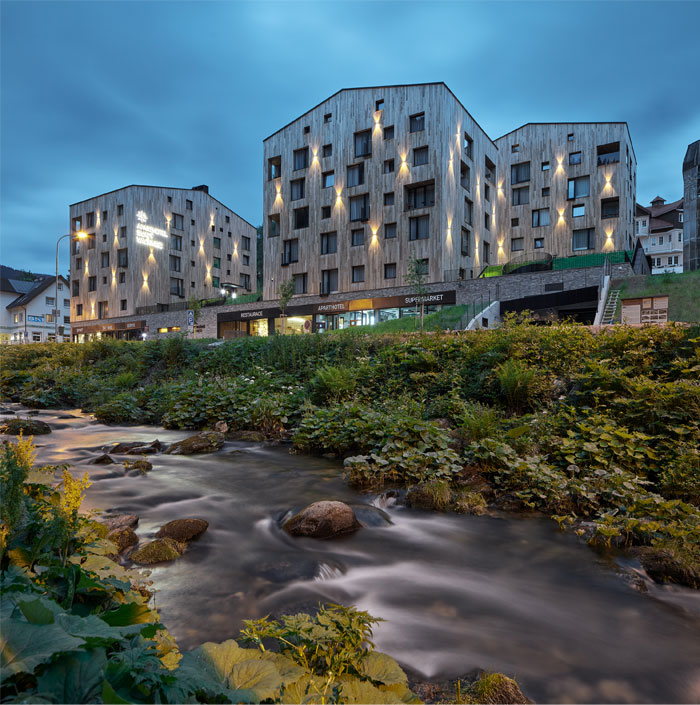 On the investor’s parcel in the village centre on a visually exposed spot, there used to stand the small department store Sněžka from the 80s. The long mass of the building gave the impression of a barrier and blocked the views into the further planes of the village. The remaining space around the building wasn’t utilized or well-maintained because it belonged neither to the building, nor the street. The commission from the investor was to build 90 apartments in the form of suite houses on the parcel of the former commercial building and the surrounding vacant spaces of the plot. 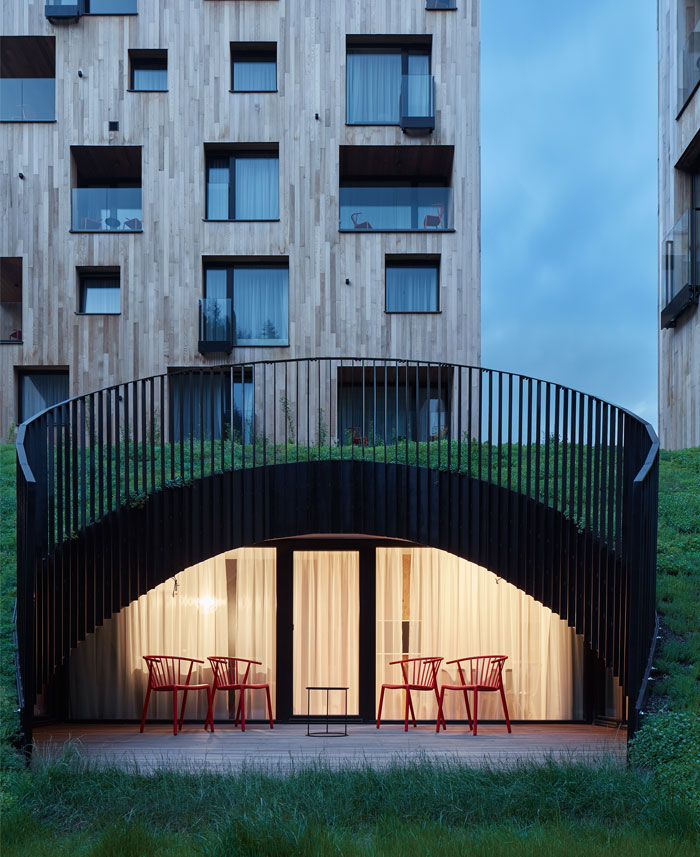 The building of the former shopping centre was removed. In its place there was created a new commercial parterre covered by a meadow. On this roof-meadow, four houses were erected. The houses are of different size and orientation. There are dynamic and exciting spatial relations between them, reinforced by the ascending terrain. The roof meadow is a semi-private open space in-between houses, intended for various activities and events. There is an outdoor grill with seating, a children’s playground and the space in front of the apartments doubles as terraces for individual suites. 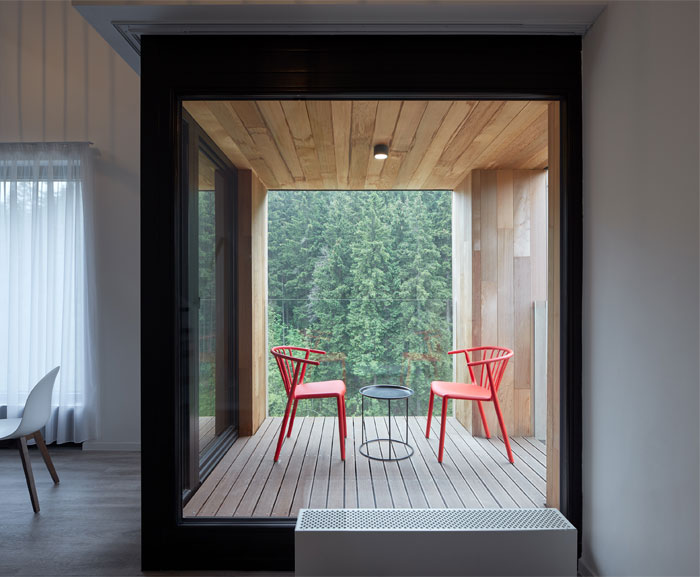 The building has two underground garages on different levels. The mutual parterre is accessible through the interior of all of the apartments. Entry into the apart-hotel is through the reception lobby. The winter entrance leads to the ski-room in which each apartment owner has their own ski box. 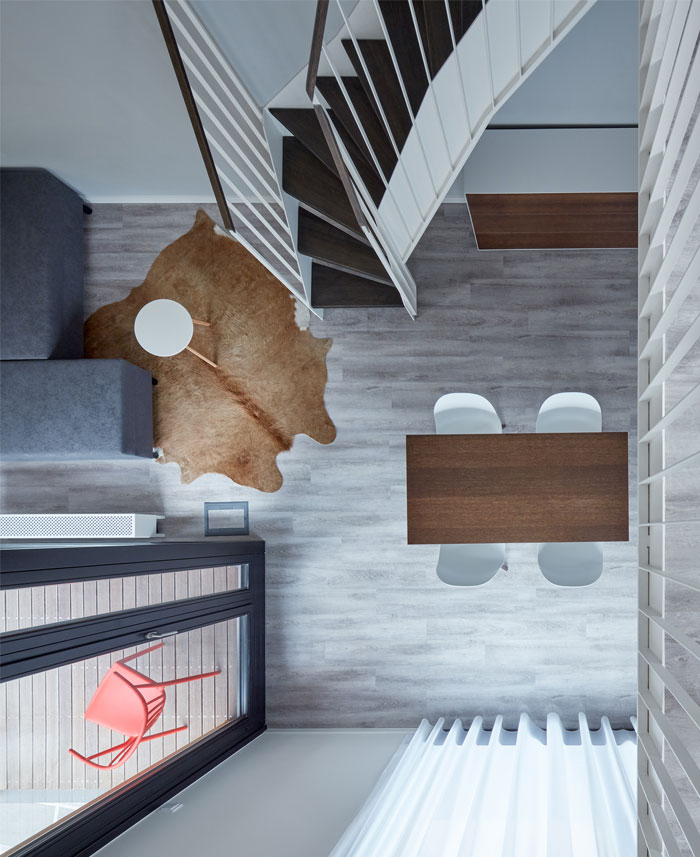 The shared parterre has various service for the accommodated: an adult game room with a 3D golf simulator, a teenage game room, children’s game room, a winery with chilled wine in which the customers have their personal wine boxes, a lobby with a fireplace and a restaurant specializing in grilled meat. The commercial spaces include a supermarket with its facilities, a pharmacy in the style of ‘shop in shop’, connected to the supermarket, a sports goods store and a ski and bike service shop. 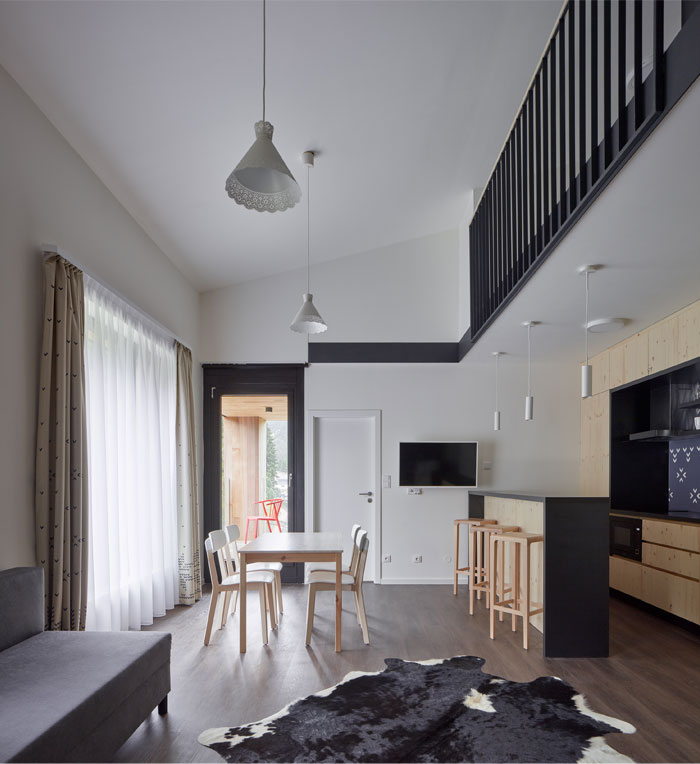 The apartment towers are organized around four elevators and staircases. Entrance to the apartments is through the shared courtyard in front of the elevator. Organizing the apartments into four towers eliminated long apartment hallways which supports neighbour relations on the individual floors and in the house. 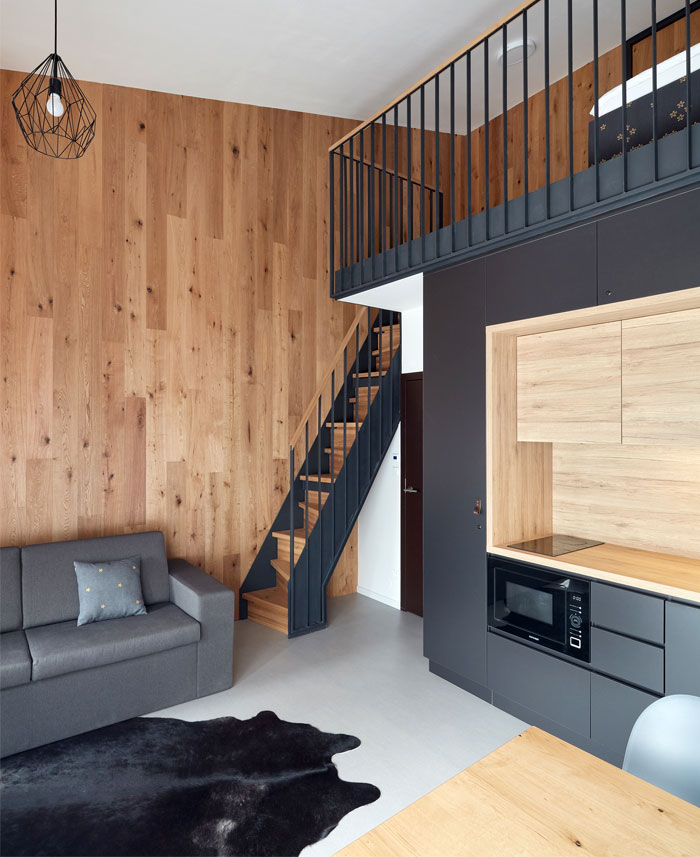 The house is based on underground stilts on two elevation levels – a bench in the hillside. The house’s core construction is of reinforced concrete, changing to a brick system with concrete ceilings in the upper levels of the building. The slanted roofs are concrete monoliths. The bearing perimeter walls are insulated with mineral wool insulation covered by veneer from red cedar wood. The parterre has stone cladding. The meadow above the parterre is an intensive Optigrün green roof with retaining ribs on slanted planes. Tower roofs are covered by an extensive green roof with sedum matting. 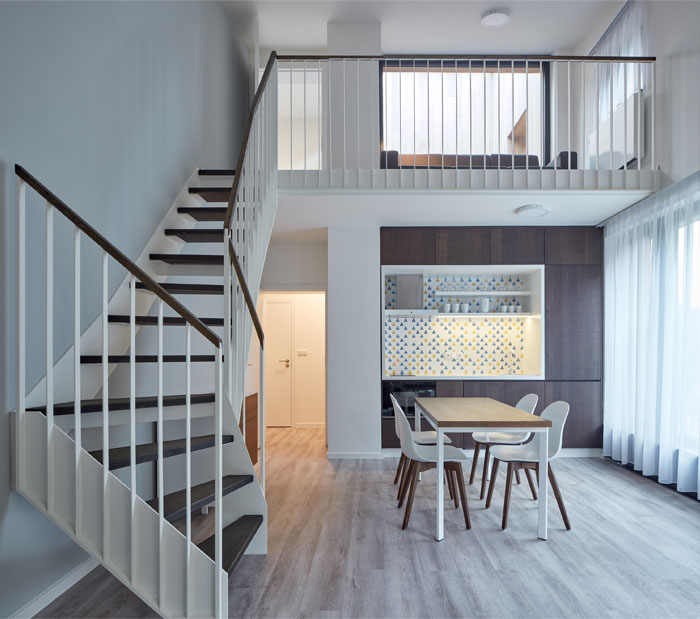 The apart-hotel is intended for the recreation of the suite owners, but it also offers their suites for rent in times of vacancy. The rental system includes reception and cleaning services, and complete hotel service for the accommodated guests. A purchase of such a suite therefore becomes a guaranteed profit investment for the owner. The apartment interiors were designed in four variations from which the owners could choose. The author-designed interior was a condition the owner had for the actual integration of the building into the rental system. Each style represents their graphic symbol that is present in the interior. 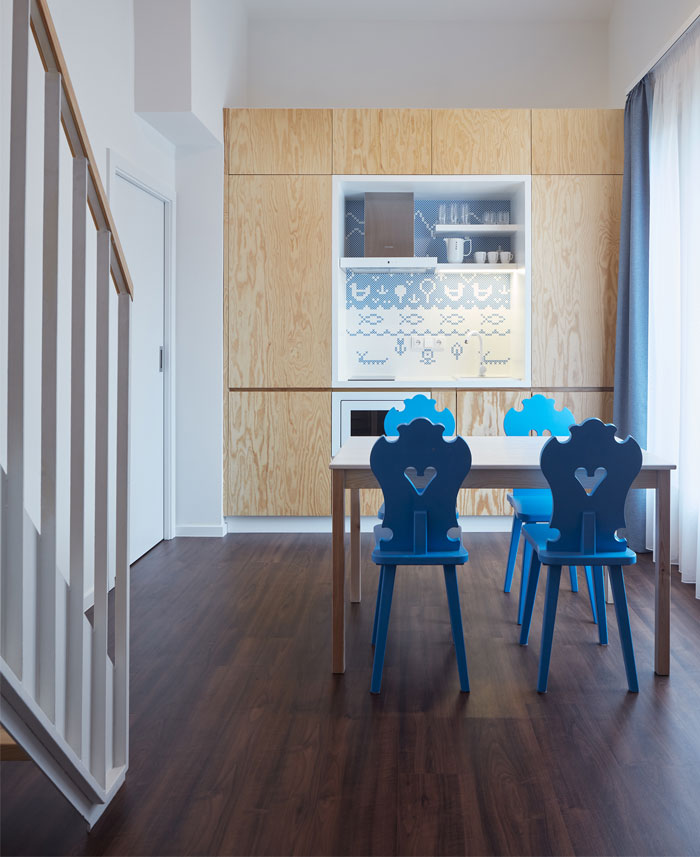 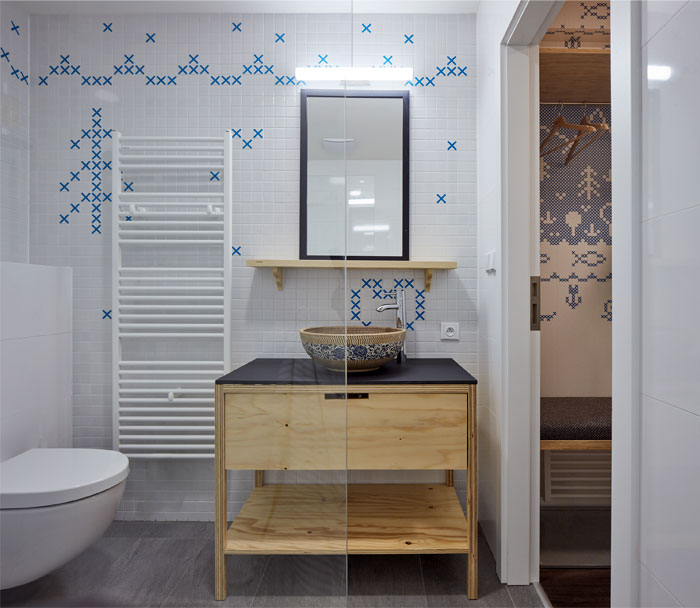 Glamour – golden star: The interior is based on darker tones of oak, gold embroidery and ornaments.

Scandinavia – the ‘V’: Light tones of whitened spruce in combination with white ornaments on dark blue textiles. The bathroom is decorated with a reindeer.

Modern – triangle: Follows the elegant design of the 50s and 60s and brings through a light never-aging elegance.

Krkonoše (the Giant Mountains) – blue cross: A small cross on a light coloured background resonates with folk embroidery and the local folk history of the mountains. The veneer is pine plywood and the interior is complimented by the traditional Giant Mountain chair. 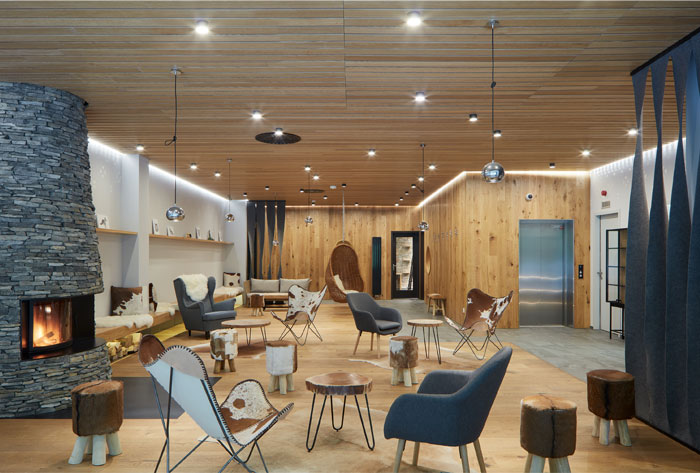 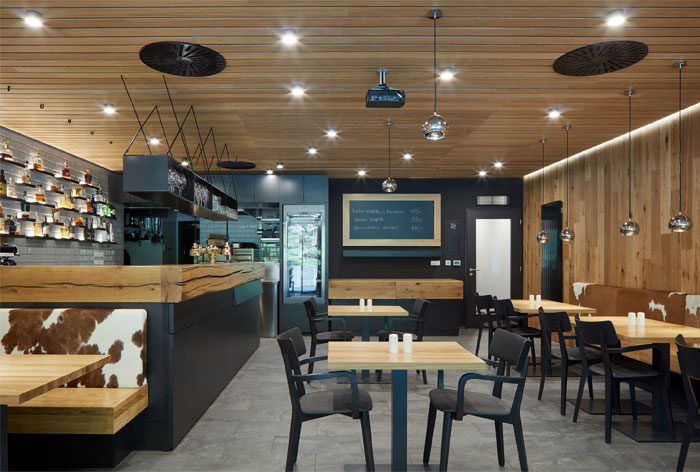 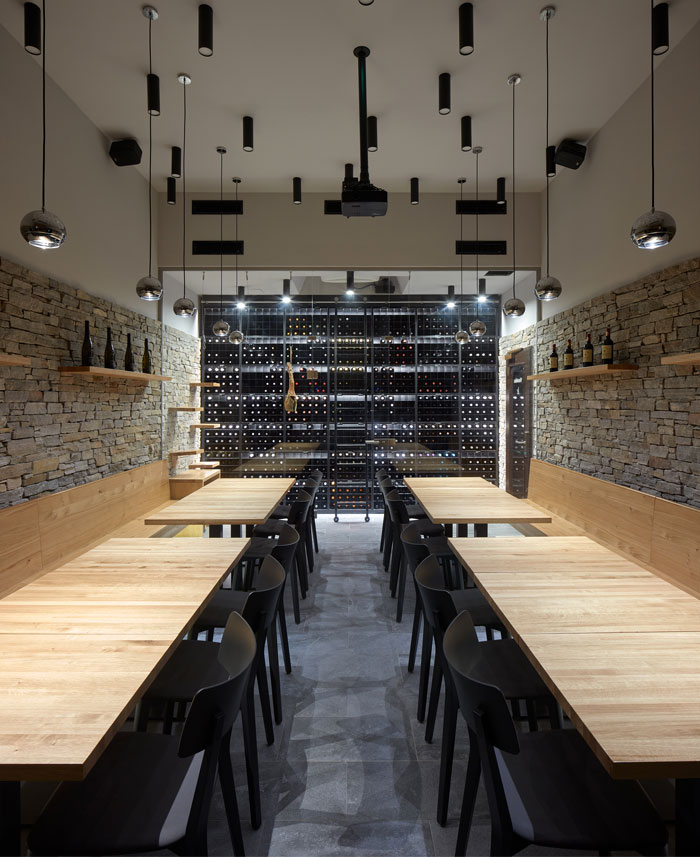 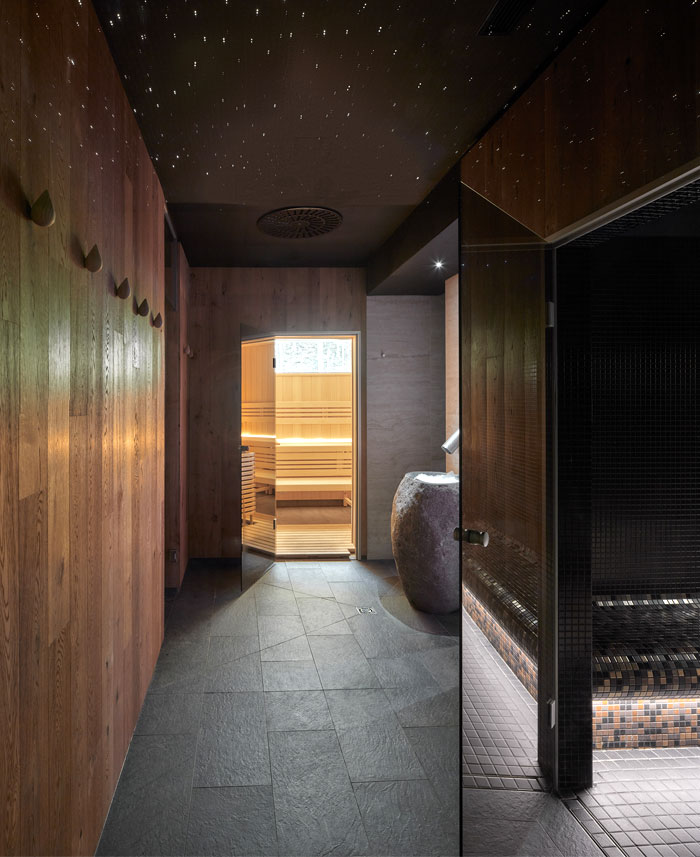 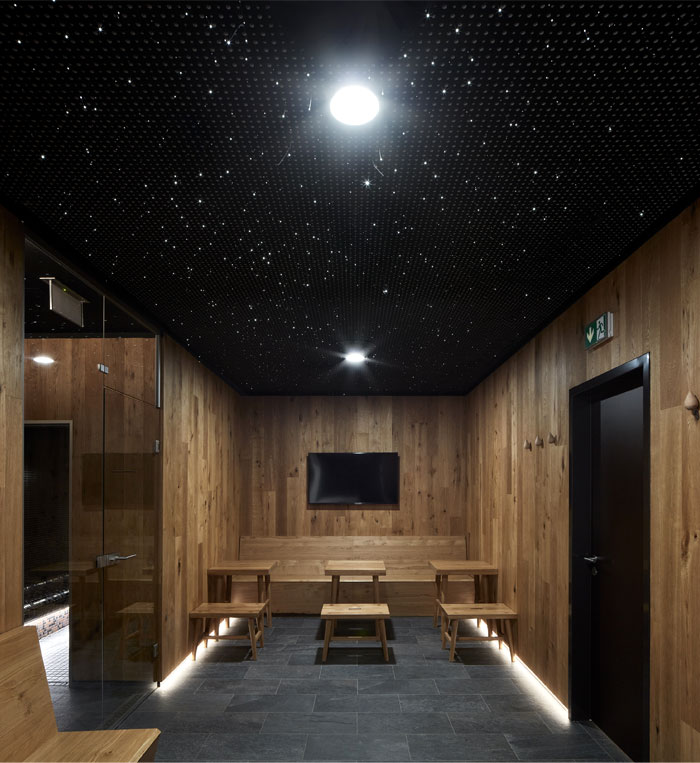