The owners of the restaurant relied on the studio YUDIN Design to create an interior that would match the offerings of their cuisine – urban food (burgers, wings), sushi, Italian cuisine, kids menu. The customer already had a name ready – BERGAMOT. He wanted the Brothers Yudin to develop the naming, concept and identity, making this location a place where to spend time comfortably with the whole family; in other words – it was necessary to create a new restaurant brand for family people! 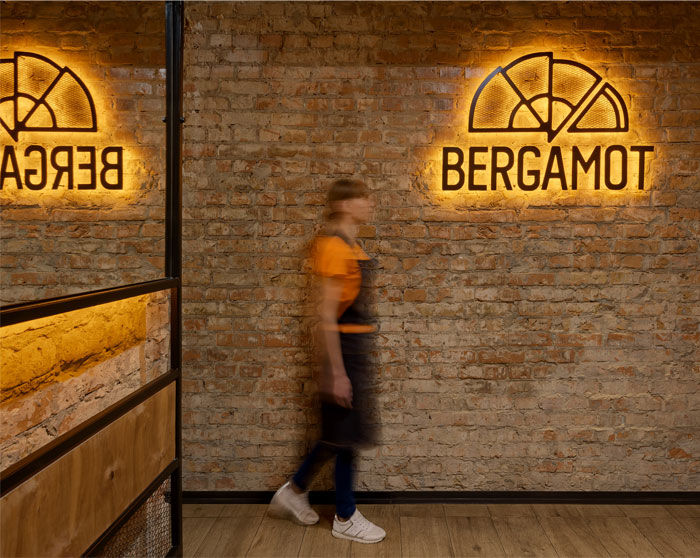 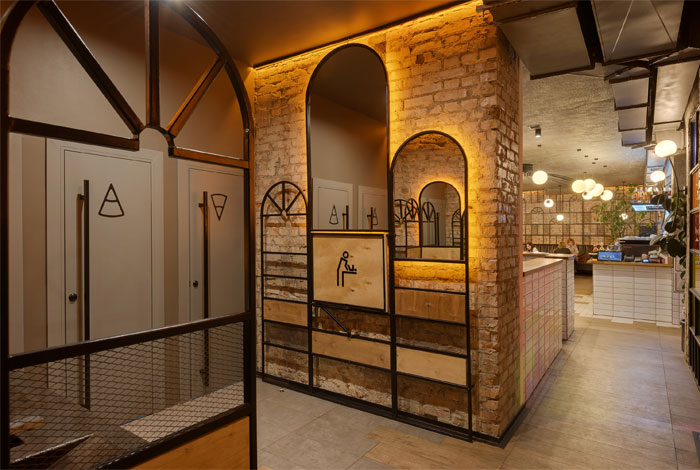 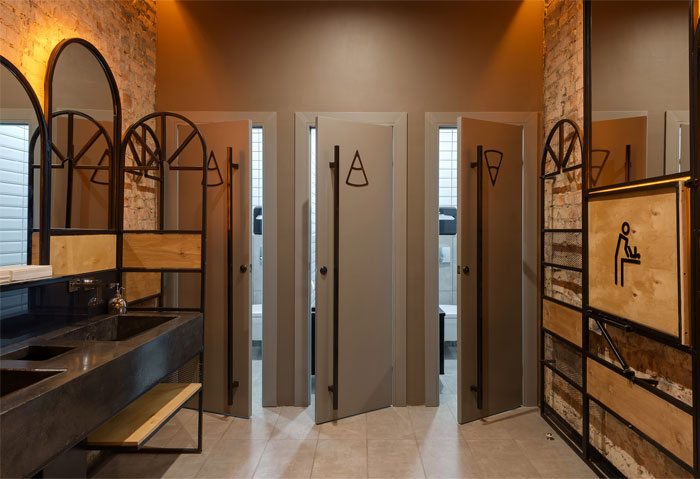 From the beginning Aleksandr and Vladimir Yudin realized that a restaurant with such a concept and Italian cuisine can be turned into an every day enjoyable place. So they offered a design solution so easy and intuitive that it seems that everything is familiar here, as if you have been visiting this establishment for many years! 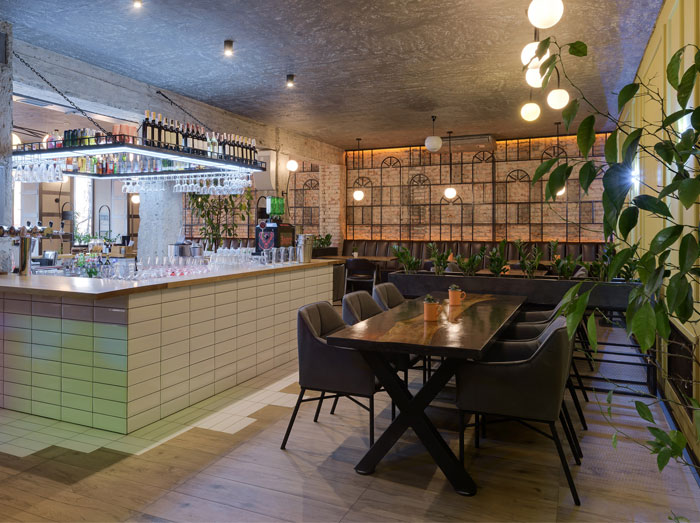 The designers began working with the identity of the new restaurant brand. The name BERGAMOT proposed by the customer is easily pronounced by native speakers of any language, and is read in the same way as it is written! Moreover, Brothers Yudin found that Bergamot is a symbol of the Italian region Calabria, and decided to use it in some aesthetic way in the interior. The traditional landscapes of the cities in Calabria inspired the studio YUDIN Design to use a bright stained glass partition that complemented the minimalist light atmosphere in bright colors (aesthetics, corresponding to Japanese cuisine) and defined a play area for children. The logo and signboard in orange colors also derived from the “citrus name”. The logo is lined by the designers in such a way that one can see both citrus, sliced pizza, and a Japanese folding fan in it.

The designers decided to use red brick in the interior, decorating it with metal bars that resemble the traditional arches of the Italian architecture, the Japanese folding fan and citrus slices. The minimalist interior elements were used by the architects in order to honor the Japanese cuisine in the establishment. All work was done easily, which is typical for the studio YUDIN Design. One element after another helped Vladimir and Aleksandr to create an integral concept of the place and brand BERGAMOT. In addition to direct communication with the identity, brick and metal bars perfectly the idea of creating a simple family space. Here you feel like in a comfortable summer patio. Grid decoration is also used on the restaurant’s half-closed terrace, where also a simple geometrical grid was applied, used here also as shelves for flowers. 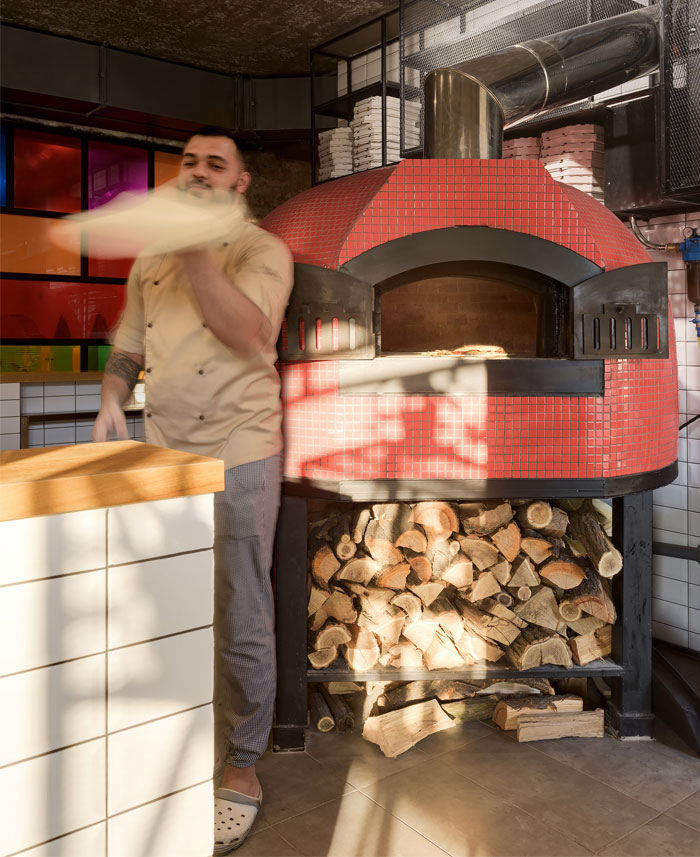 In general, the whole restaurant room is enough spacious. There are no corners, corridors or special zones, but everything is in sight. Therefore, guests feel here at home. Only for children there’s a game zone near the stained glass partition, and even it is completely open to the public. Parents can communicate with each other and, at the same time, watch their child in the playroom. The summer terrace also has a simple structure as a gallery.

Eclectic styles manifest themselves in the walls and in the decorated moldings (clear hints of neoclassical), while the concrete ceilings are made in the industrial style. All stations for waiters and bar are decorated with white tiles (minimalism) and, all over it, colored decor elements reminiscent of Calabria and Italy in general: bright chairs and sofas, a red wood-burning pizza oven, natural flowers! 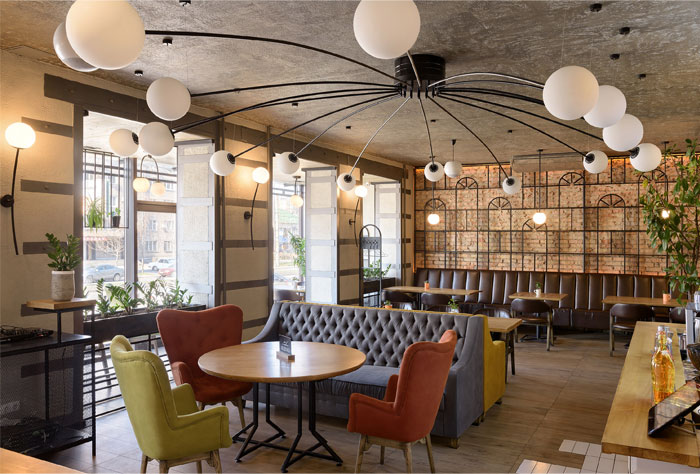 As always, the studio YUDIN Design helped to complete the restaurant lighting with a huge central chandelier, resembling a planetary orbit, round ceiling and wall lamps. The design of this collection of lamps was developed specifically for BERGAMOT restaurant in the workshop YUDIN Product, while the products were realized in the famous Lviv manufactory PikArt Lights. The manufacturing technology of the main chandelier is not simple itself, since it combines curved metal rods of different lengths. 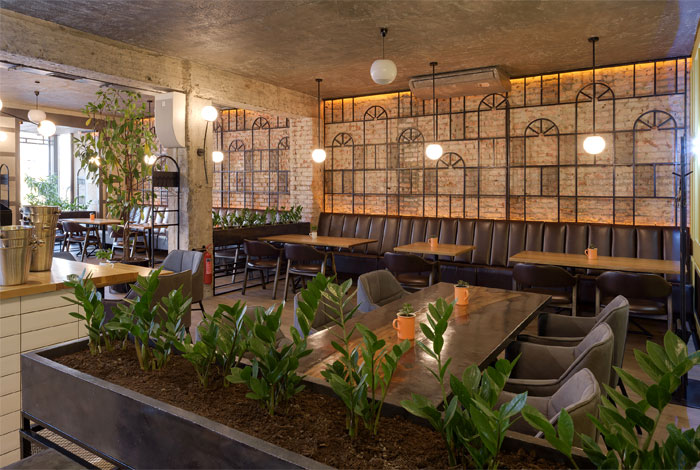 The designers worked with a spacious bathroom, in which there is a also a changing table. For the Wc doors Aleksandr and Vladimir portrayed the lady and gentlemen in the form of citrus slices, the first representing the figure a woman in a long dress, the second is identical to the traditional male tuxedo. The massive entrance doors of the restaurant have handles in the form of two slices. 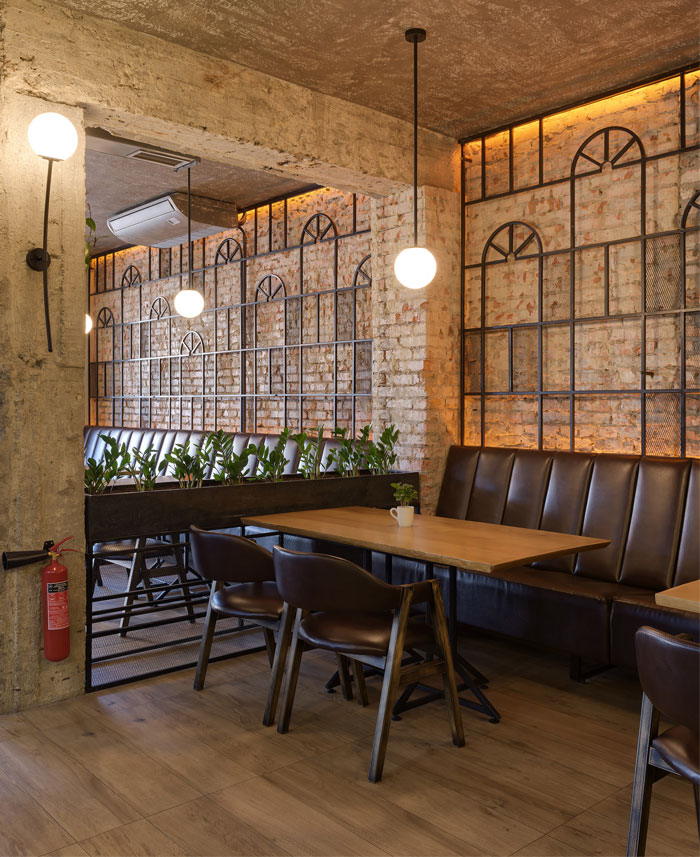 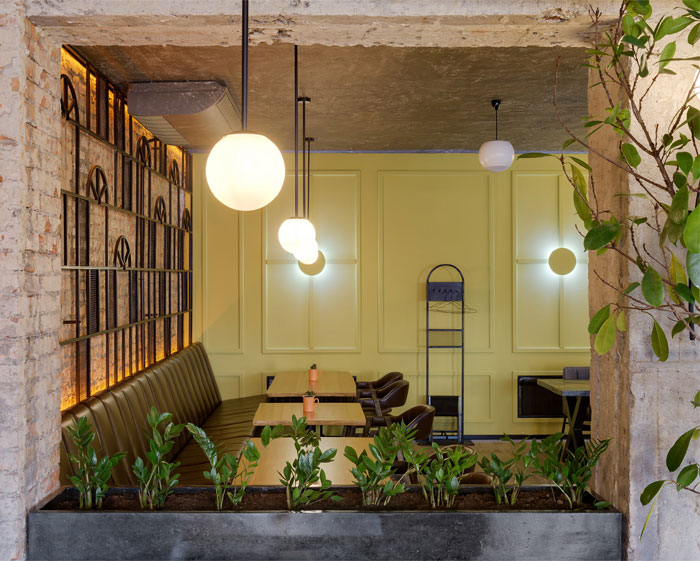 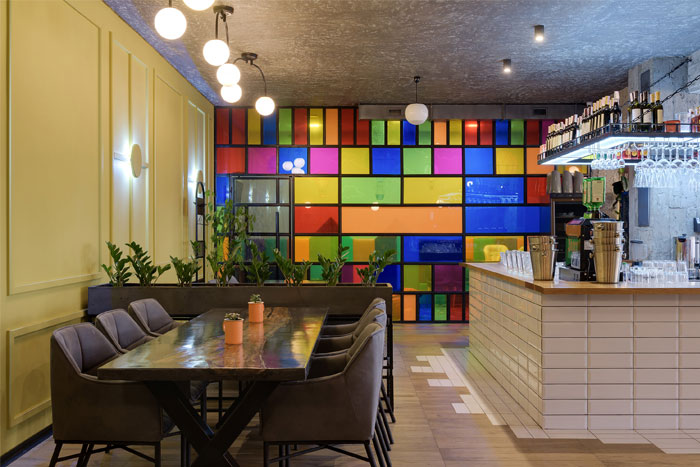 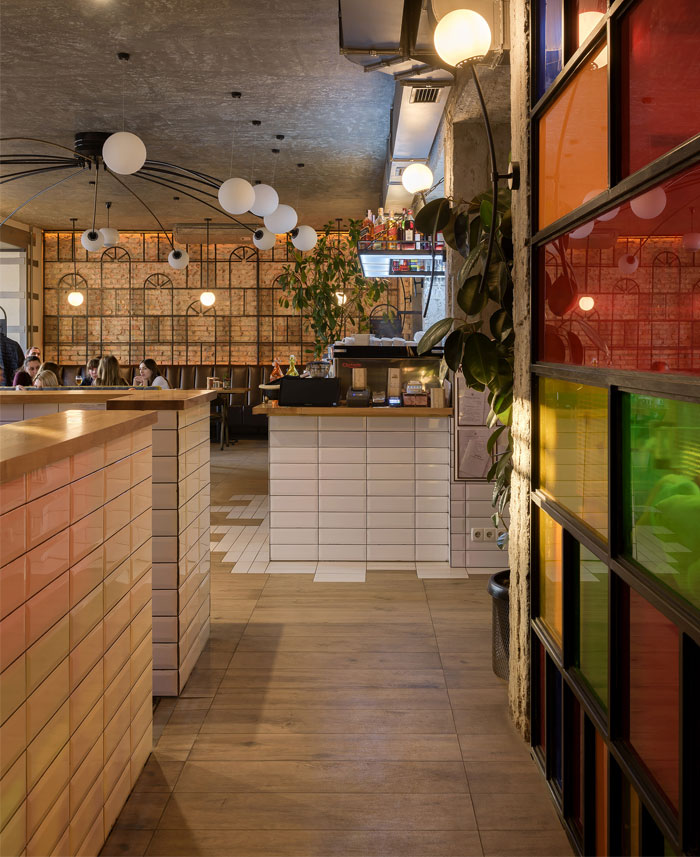 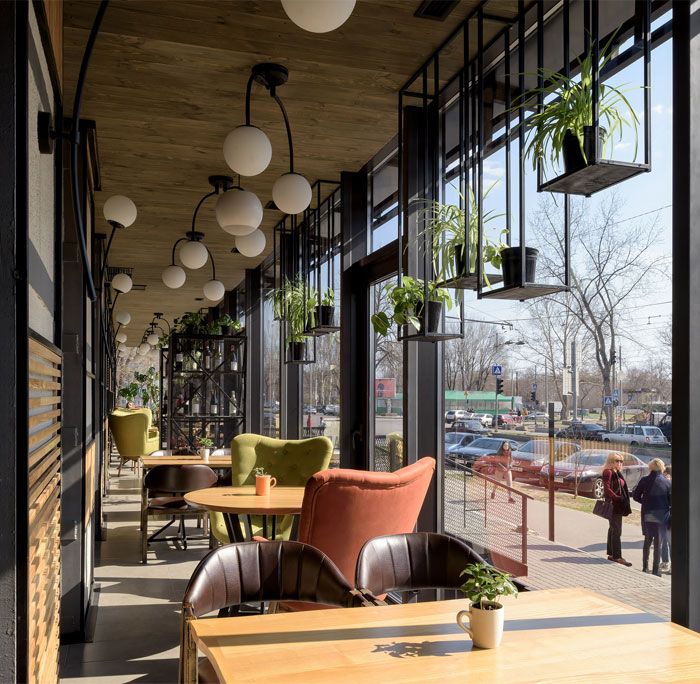 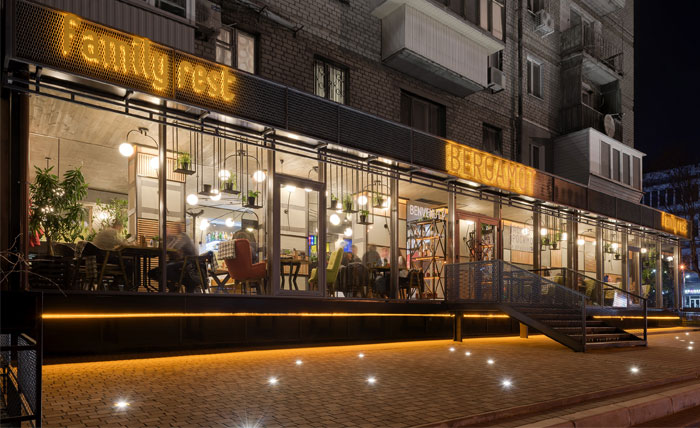