LUO studio designed a micro office for a graphics printing company in Beijing, which merely occupies 9.639 square meters. Based in Beijing, where “space” is relatively expensive, the chief designer Luo Yujie has been studying how to integrate multiple functions to maximize the utilization of space. For instance, he once designed a piece of large furniture that combined the functions of storage, sofa and computer desk in his small residence, and customized a variable and versatile work desk for architects. 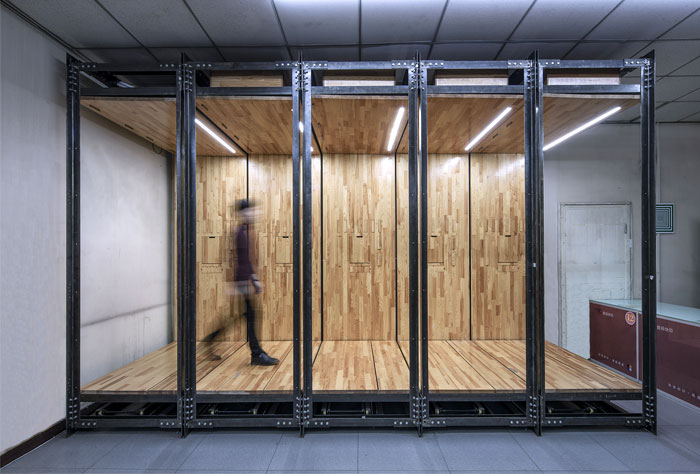 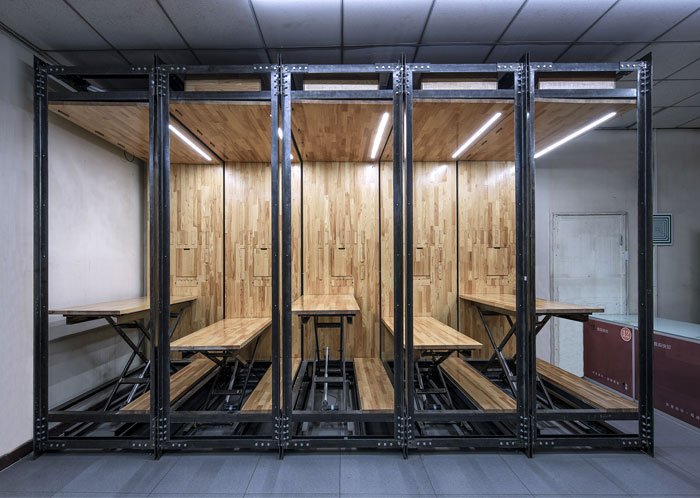 Similar design concept was applied to this project too, which was accidental yet very necessary. Since digitalization has led to the sharp decrease in paper printing volume, the client, a service provider engaged in graphics printing industry, intended to separate a small office in its existing workspace, so as to establish a design department and transform its single printing service into a “printing + design” mode. The newly-designed office was expected to be fine and tiny, distinguished from the existing workspace, adaptive to future changes, and able to return to the original spatial state. 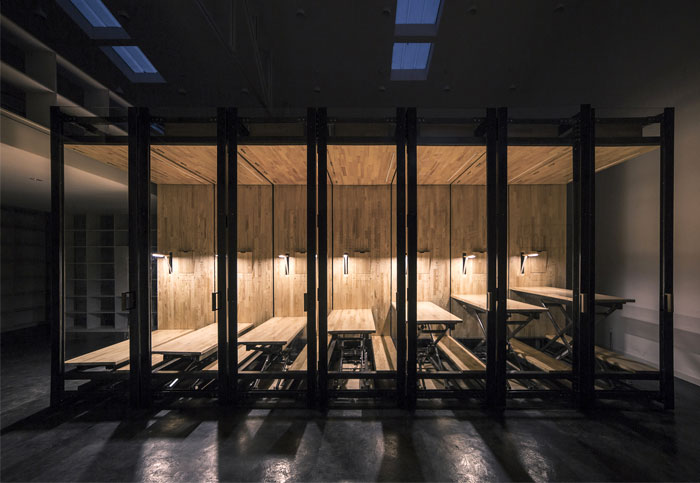 Integration of Functions & Changeable Space
Based on site conditions, LUO studio chose to create the new office in a corner. Considering that the “printing + design” service mode requires face-to-face communication between customers and graphic designers, the smallest work station can accommodate two people sitting together for interaction. The micro office is composed of several minimal modular units, which are 1.53 m, 0.9 m and 1.377 m2 in length, width and area. Each unit integrates the basic supportive elements for working, including seat, desk, cabinet, lamp, socket, etc., which are set at reasonable heights on the upper area, bottom and the sides, conforming to ergonomic requirements. 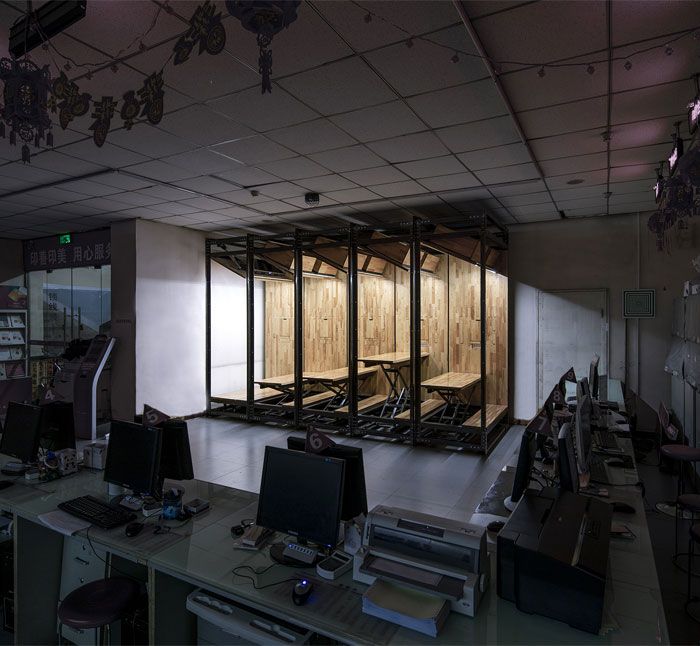 LUO studio tried to endow the single limited space with multiple and transformable functions, so as to obtain infinite usage possibilities in it, such as for working, meeting, presentation, and display, etc. To make the space variable, flexible X-shaped structures and hydraulic rods are perfectly combined. The desk and sitting surfaces can be raised (up to 1.2 m) and leveled, which function as not only desks and seats but also floorings. The cabinets in the upper area, serving for office supplies storage, can be opened and closed by stretching out and drawing back. All modular units are interconnected seamlessly. And adjacent modules can be lifted and lowered alternately as well as converted between desk and stool. When arranged in an ascending order of height, the modular units together form a little meeting room.
External Structure & Internal Enclosure 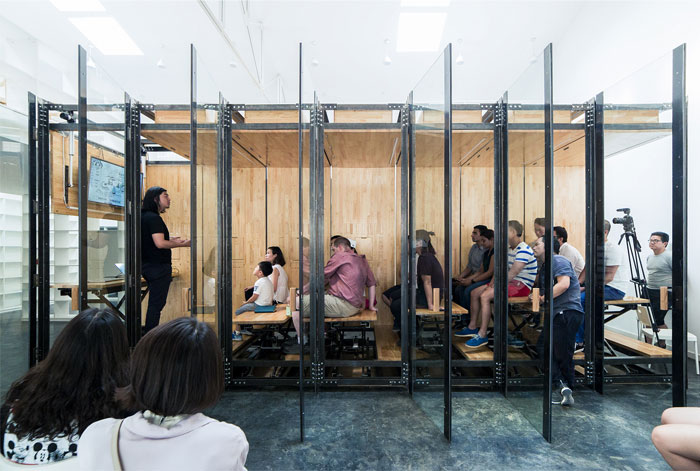 In order to avoid disturbing the employees working in the existing office during construction and allow restoring the space to its original state in case the client’s new service mode doesn’t go well, LUO studio made the interior structures self-stabilized. In this way, all those structures didn’t need to be fixed with other installations, hence avoiding on-site decoration. Processed in the factory and then carried to the site and placed in specific positions, the interior structures can be operated after being powered up and can be easily moved or removed at any time. 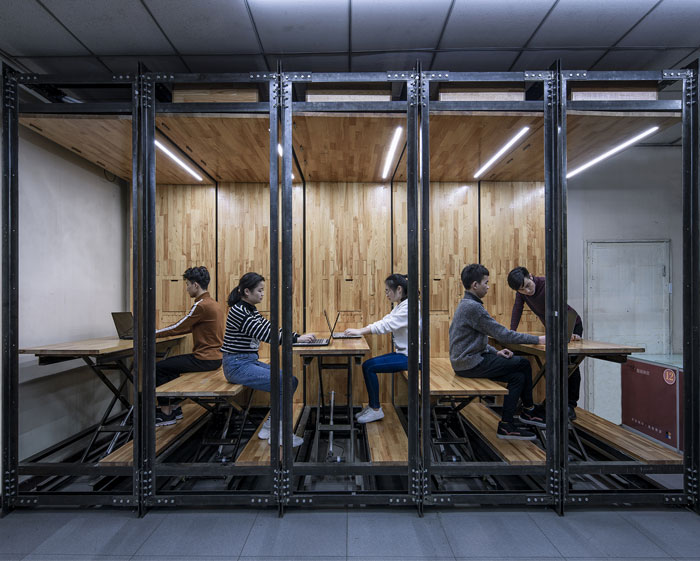 As opposed to common architectures that have a exterior skin to enclose the framework, this micro office exposes its structures. The functional structures of desks can be seen clearly from the outside, which ensures the continuity of internal and external interfaces. The exterior structure was exposed, making it solid, durable and easy for maintenance. What’s more, unnecessary manufacturing costs were saved. 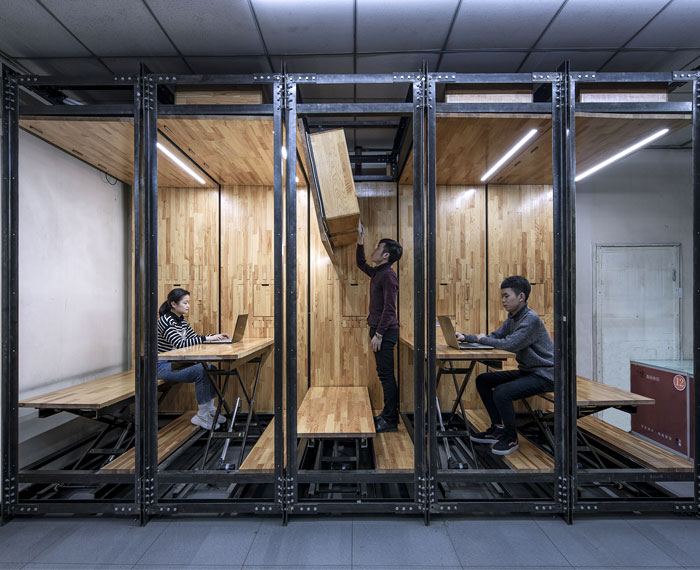 The external metal structure and the warm wooden interior contrast and integrate with each other, and the glass exterior makes the space transparent and open. Remarkably, the section forms a C-shaped spatial pattern. The material palette, mainly consisting of wood, metal and glass, is simplistic and clear, which is helpful to prefabrication, installation and moving. 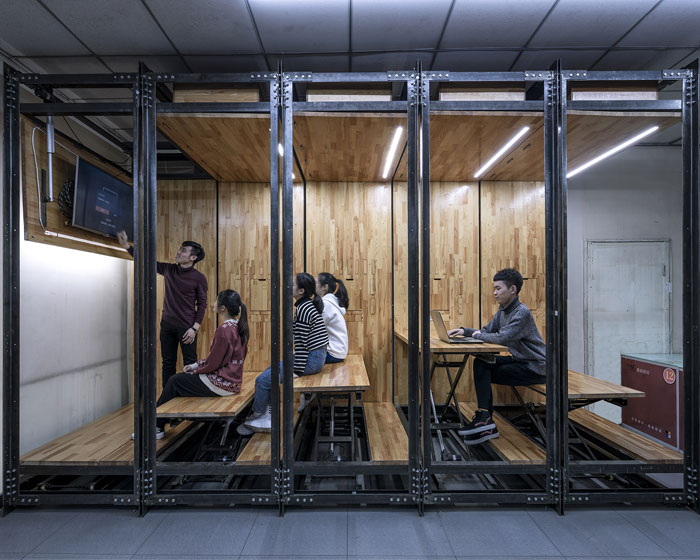 Micro Office
9.639 m2, is less than the area of an ordinary bedroom. However, such a limited area can be an office equipped with 12 work stations, a meeting room for 18 people, a small exhibition room that accommodates 28 people, and a salon space featuring a stairs-like structure. Satisfying the demands of working, conference, interaction, display, circuit, lighting and storage, it can also be deemed as a diminutive architecture, a piece of huge furniture and a large electric appliance. However, from the point of view of LUO studio, it’s more a spatial experiment and exploration focusing on urban problems. 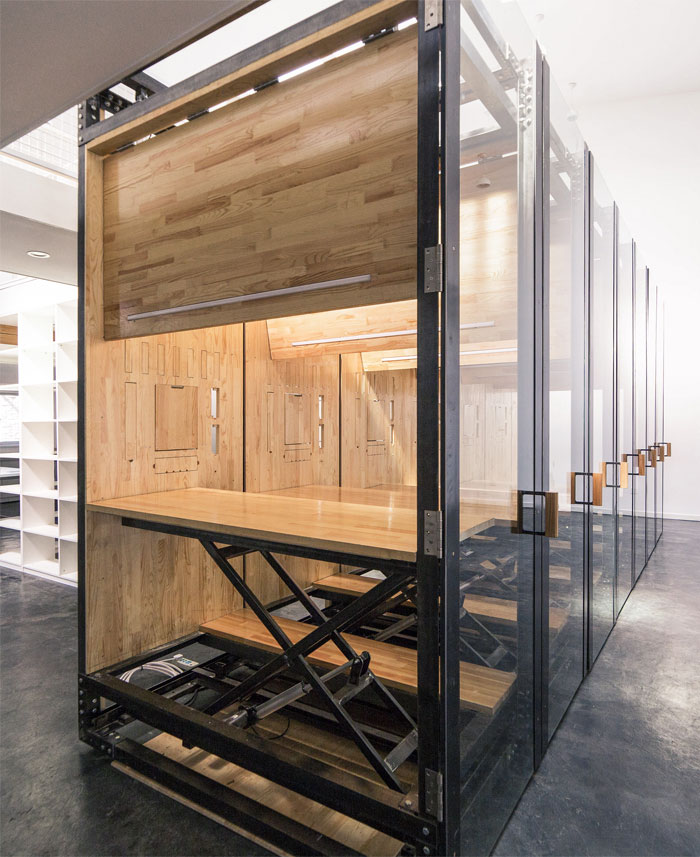 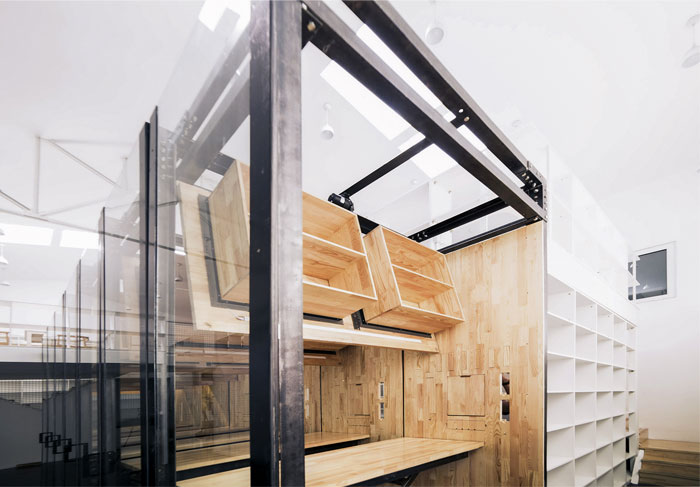 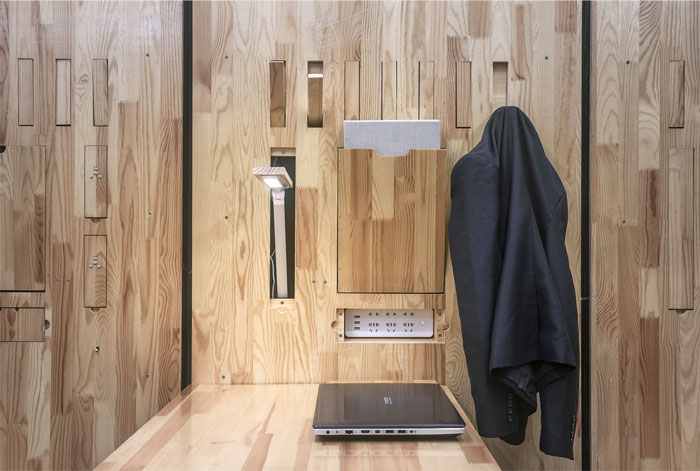