The project is situated at Jima Village in the east of Yangshuo — a famous tourist county surrounded by karst mountains, winding rivers and beautiful scenery. The name “Jima” in Chinese is very poetic, meaning “steed”, which makes the secluded, old and austere village appear to be dreamy to some extent. With tranquil ambience and beautiful landscape, it’s a perfect site for a resort hotel where people can stay away from the hustle and bustle of urban life. 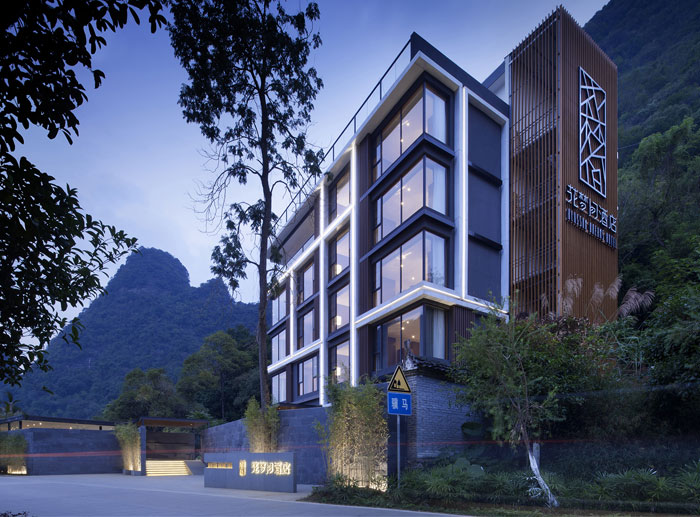 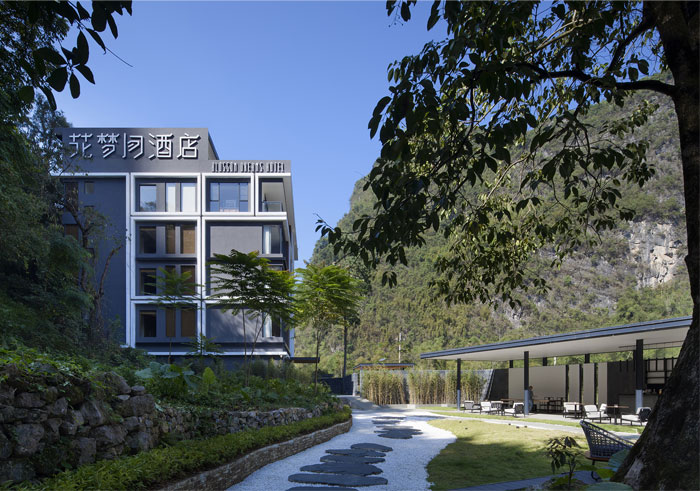 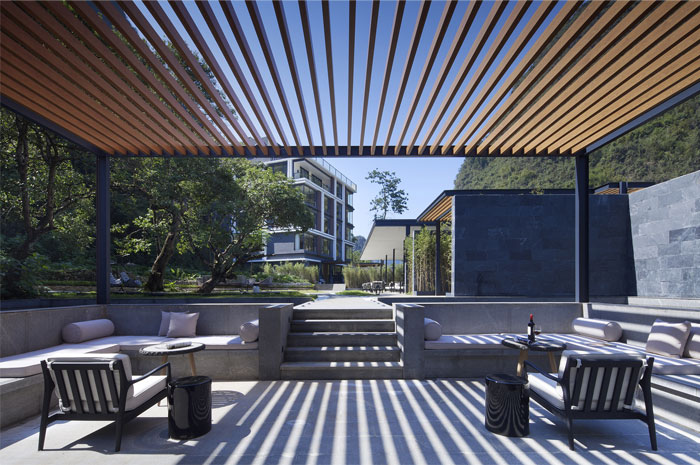 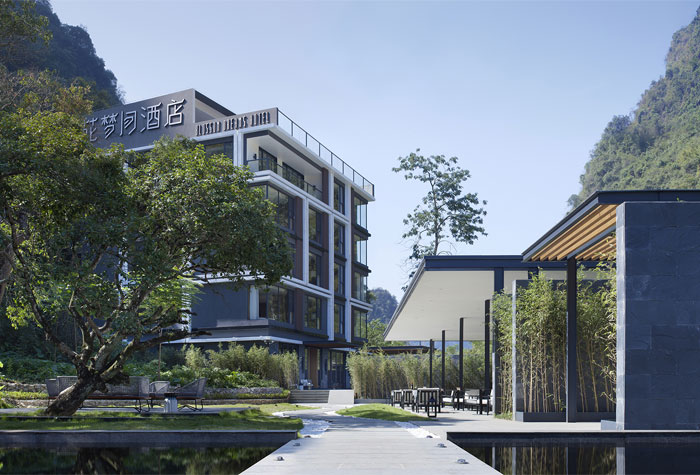 The courtyard features paths paved with white stones, patches of green grass, and a reflective pond with a sunken resting area at the center. The open coffee bar allows people to sit and savor a cup of coffee under the roof overhang whilst viewing the enchanting landscape. 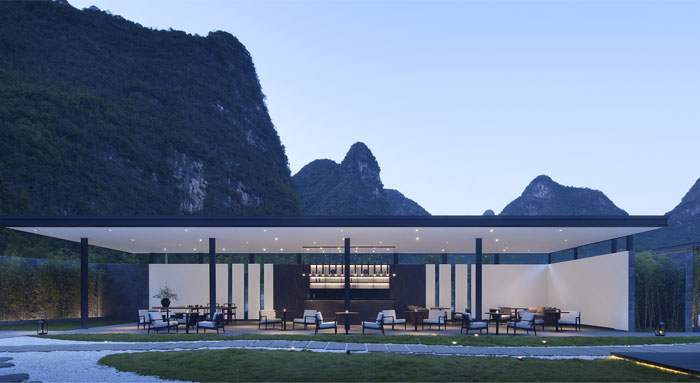 The enclosure was built with local materials, making it well blend with the site. Its opening (i.e. the hotel entrance) is guarded by verdant bamboo and characterized by a few stairs, which generates a sense of formality. Goethe called music frozen architecture, while Laozi believed that “a great sound is hard to hear”. Inspired by those philosophical views, the design studio, Co-Direction Design, worked to give the architectural facade a flexible rhythm. For the overall design of the hotel, the designers combined dynamic rhythm and static proportional relationships perfectly, thereby breaking the whole into parts and producing continuous visual effects. 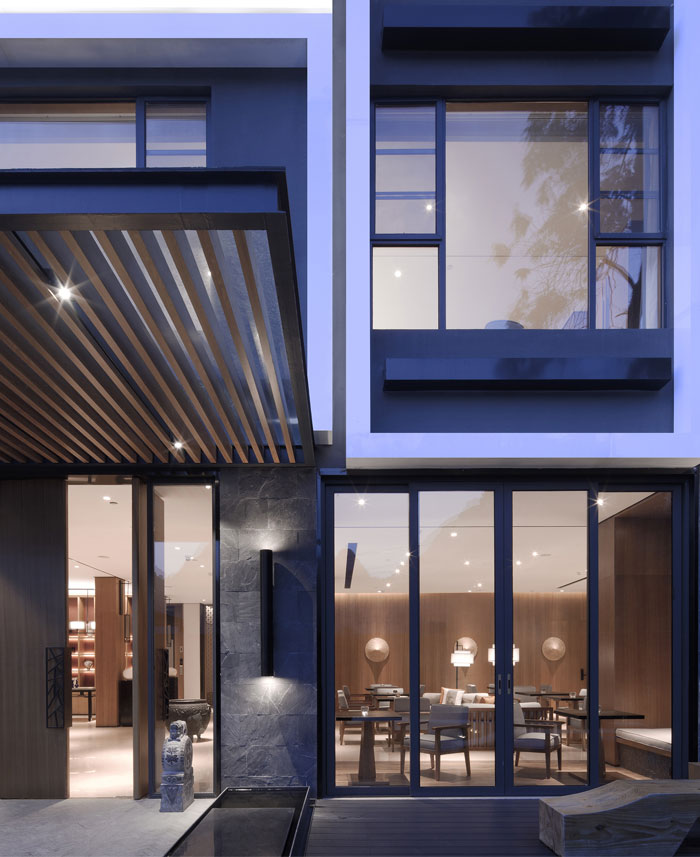 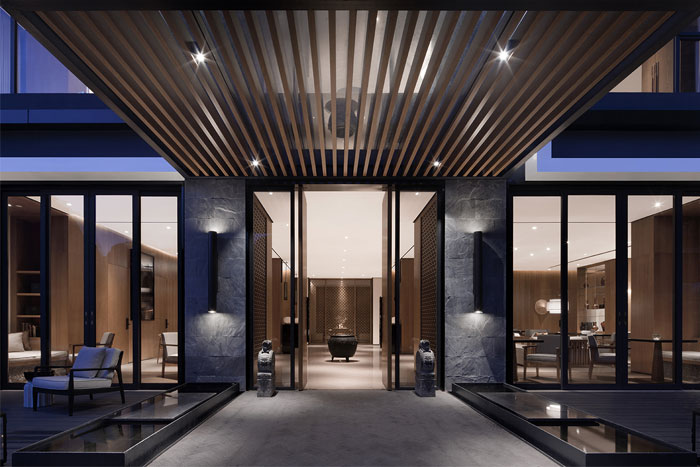 Throughout life, people mostly either stay in rooms or travel outside. They tend to be dispirited if spending too much time indoors, and feel unsettled as touring for a long time. This resort hotel, however, balances both by providing amazing living as well as touring experiences. The lobby was designed as open as possible, with columns framing the separated semi-open zones. Besides, austere wood and hollowed-out screens ensure natural ventilation. 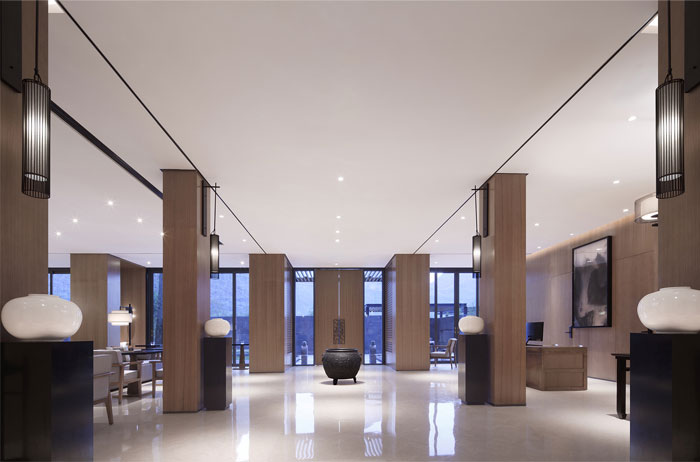 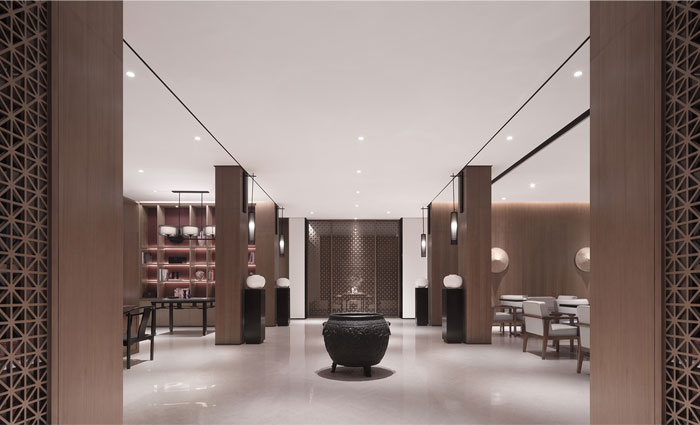 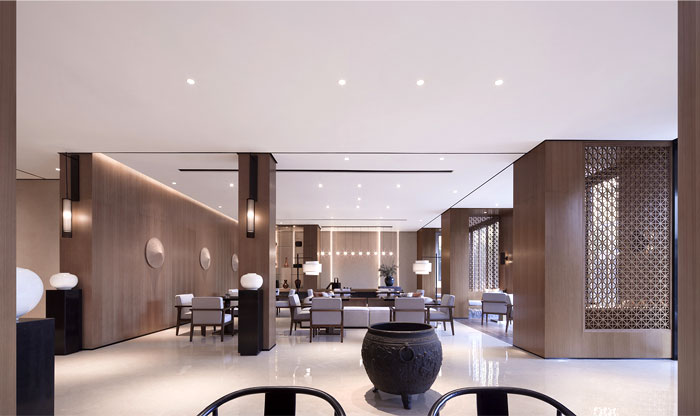 Every detail in the overall space shows a minimalist design style, simplistic but not simple. The most alluring part of living beside mountains lies in the interaction with nature. Windows frame the changing outdoor sceneries, which depicts diverse dynamic pictures. Watching the sunrise, sunset and flying birds, touching the gentle breeze, and listening to the sounds from nature, people can enjoy a relaxing and peaceful time in the guest rooms, without any mental distractions. 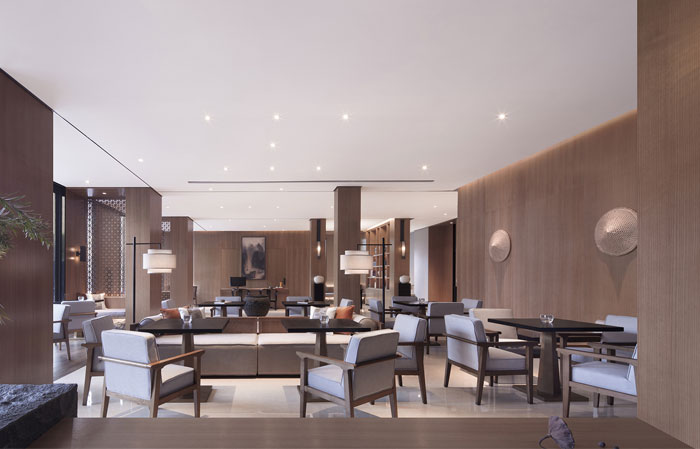 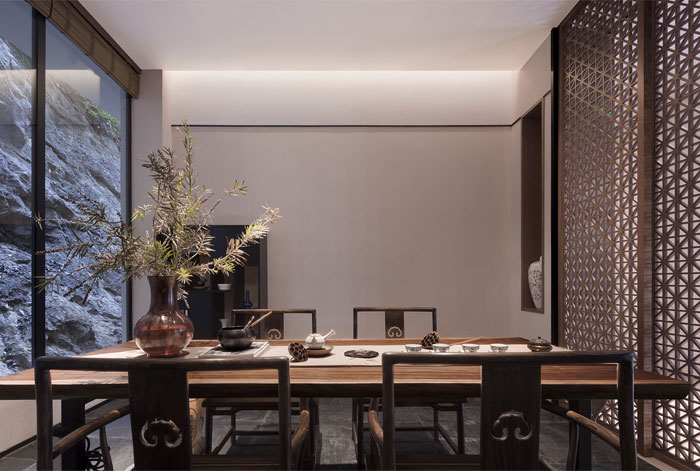 In each guest room, the large French window brings enough natural light in, and wall coverings feature textures, providing a nice visual impression. A Jade accessory is hung on the background wall of the bed, which is striking and attracting. The bathroom is a refreshing space, enabling people to embrace the idyllic surroundings and integrate both the body and mind into nature. In short, the overall design conveys the concept of enriching the spirit and purifying the mind in nature, and provides a fantastic experience of getting close to nature, living an austere life and daydreaming beside mountains. 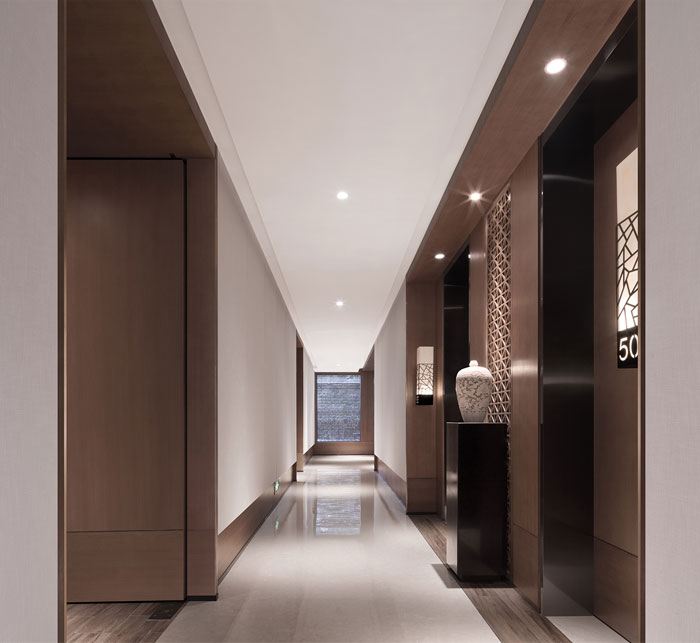 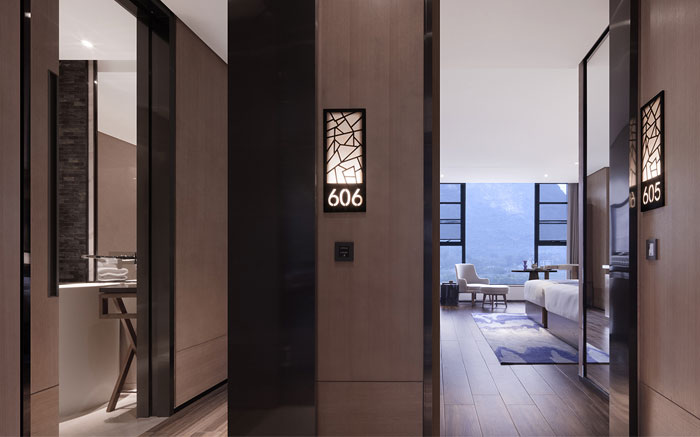 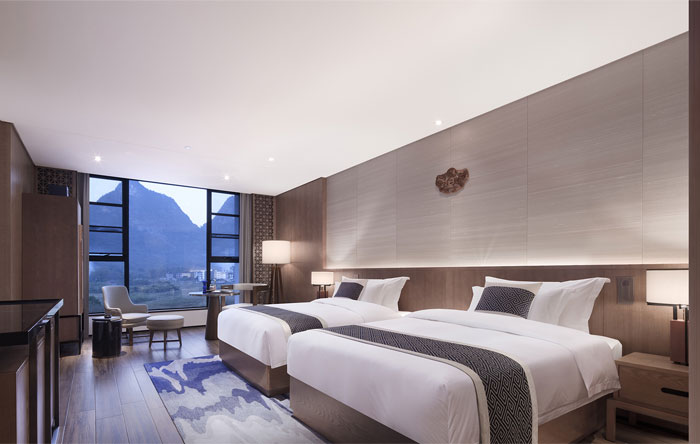 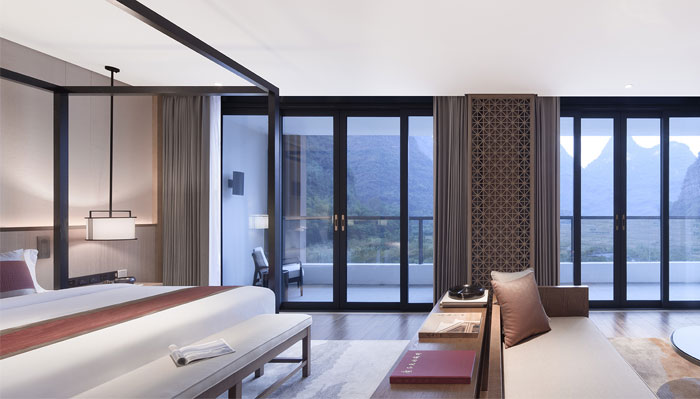 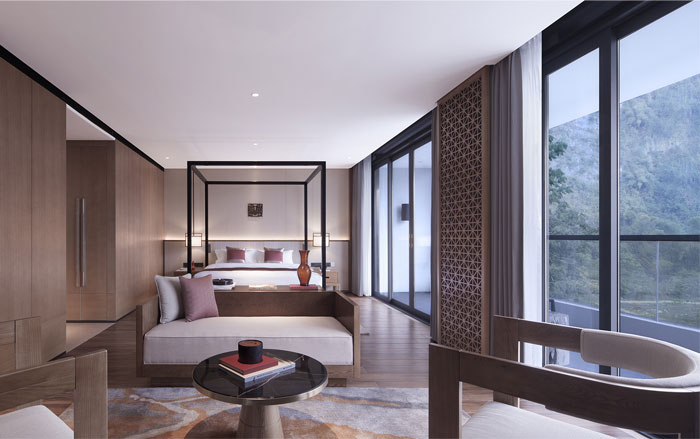 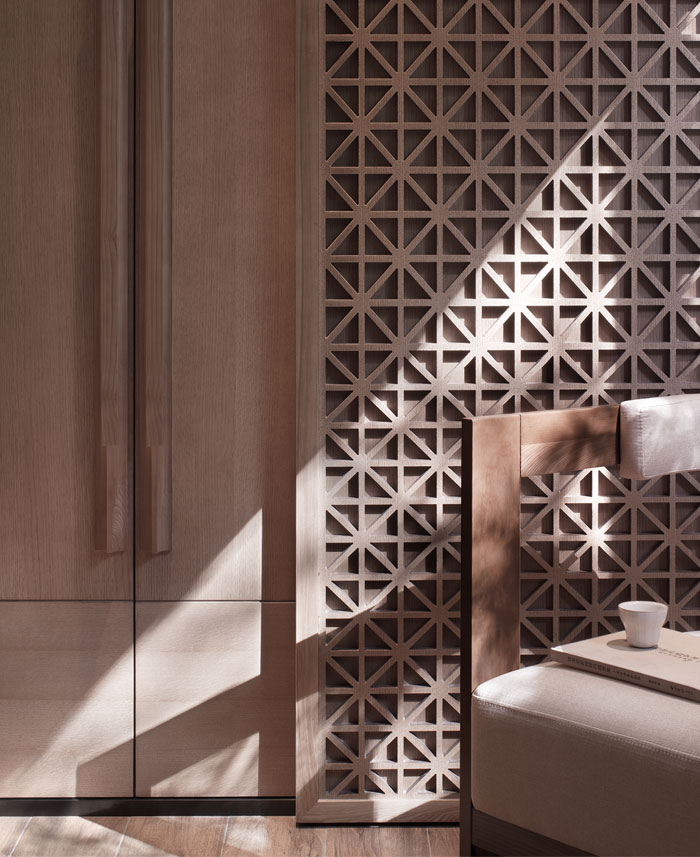 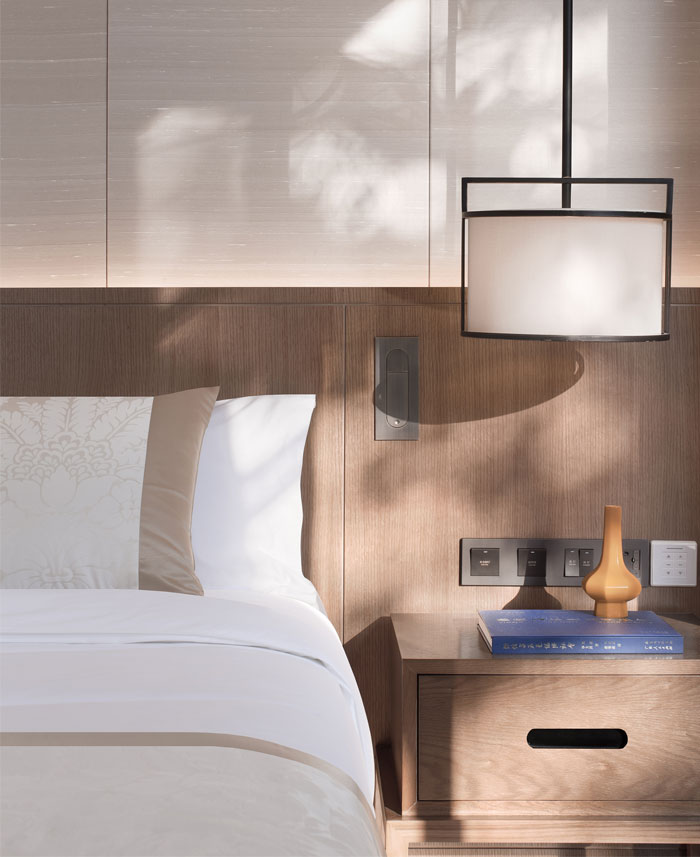 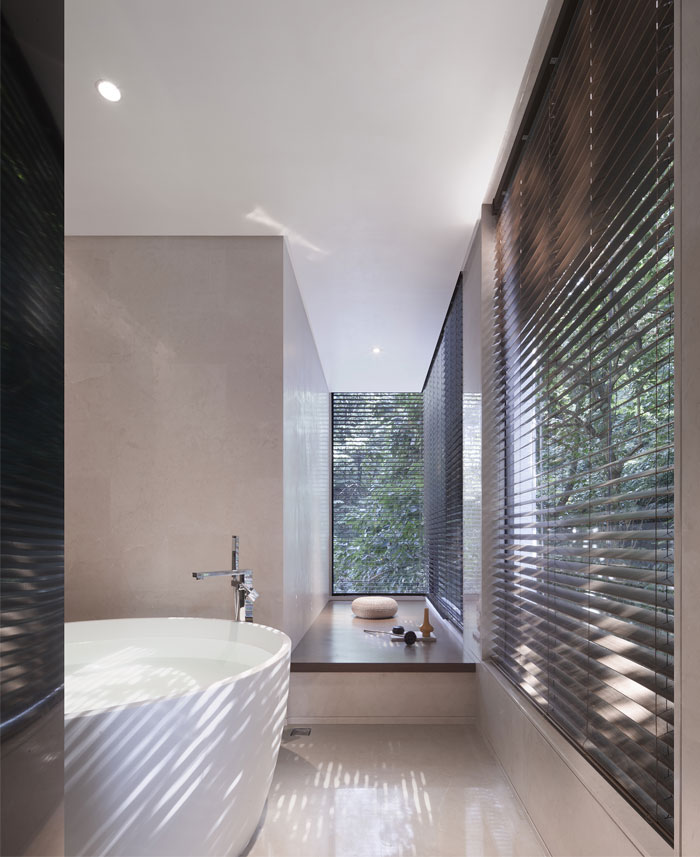