The historic Walper Hotel in Canada’s Silicon Valley North is the new hot spot for Kitchener Waterloo’s growing tech community. With newly opened offices of Yahoo, Google and other major tech players, as well as Waterloo’s RIM and the Perimeter Institute, this area located an hour from Toronto is proving to be one of the fastest growing communities in the country. 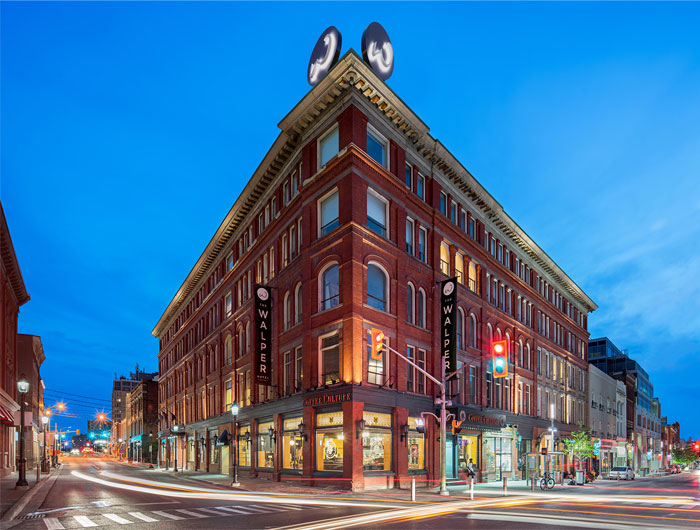 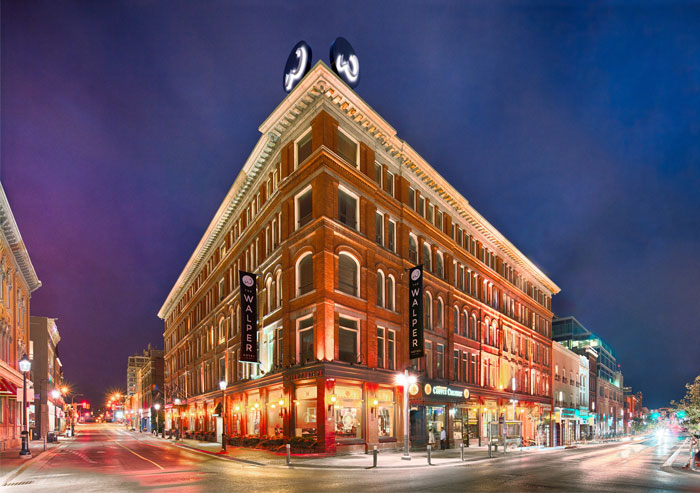 Downtown Kitchener’s most recognizable landmark, the historic Walper Hotel played a pivotal role in the city’s social and cultural scene since opening in 1893. Designated as a historic landmark under the Ontario Heritage Act in 1983, the list of luminaries who stayed at the hotel include the Queen Mother; many prime ministers, including Pierre Trudeau; Eleanor Roosevelt; many jazz greats including Louis Armstrong and Duke Ellington; James Brown; Liberace; Rudolph Nureyev; Bob Hope; and Tony Bennett. 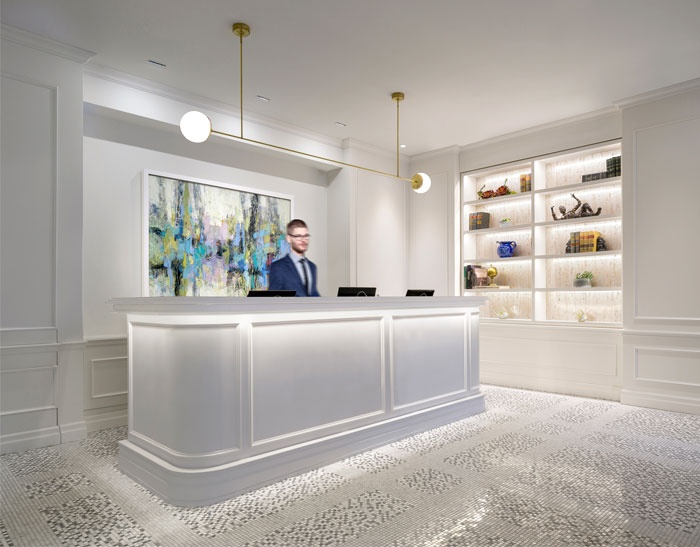 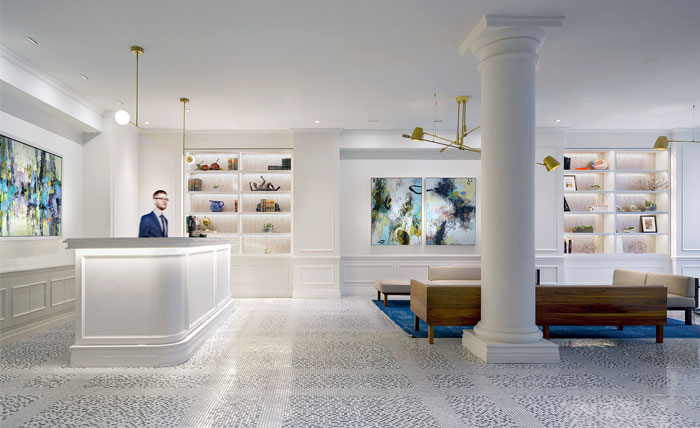 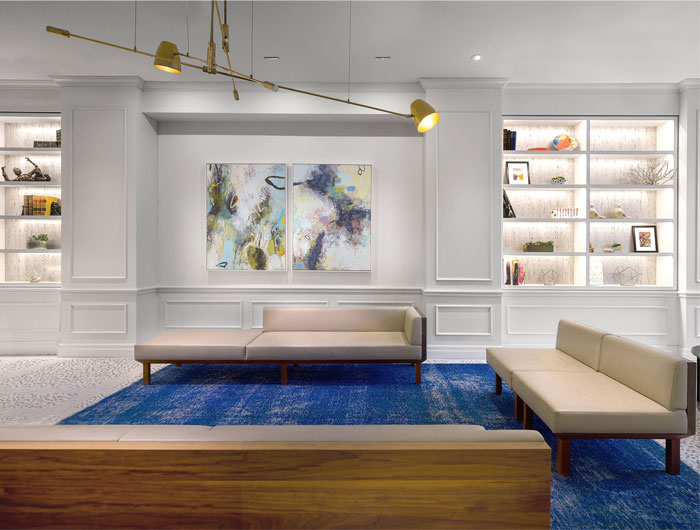 Decades later, the heritage site’s dated accommodations were unable to meet the contemporary demands of modern business travelers and locavore millennials looking for a landing spot. The region’s burgeoning tech industry attracts a discerning clientele, and the hotel’s renewal targets these visitors, bringing the best of the old into the future. As a collaboration between three design firms, the Walper was transformed into a modern boutique hotel while celebrating its historic details and pairing them with bold contemporary design. 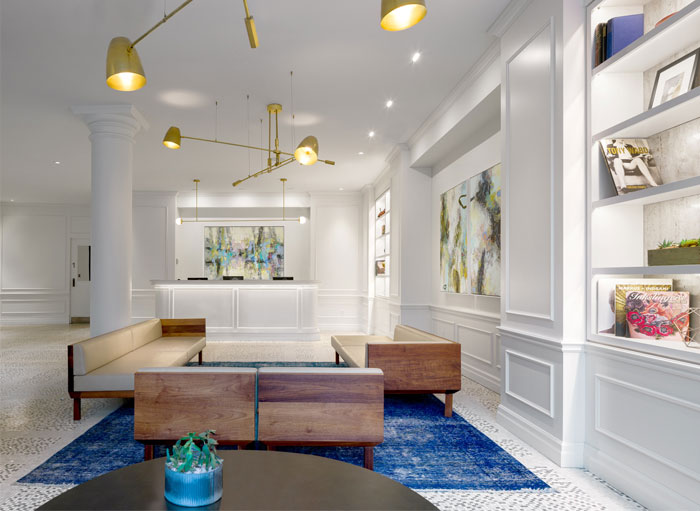 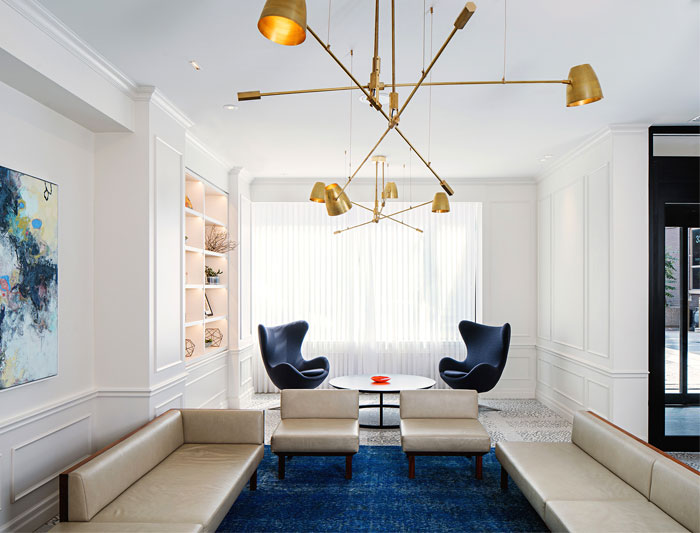 The lobby and public spaces contrast traditional details such as decorative crown mouldings, wainscoting and trimwork with sleek, contemporary finishes and furniture. The finishes derive from a clean, white palette that highlights the colourful artwork, playful light fixtures and bold furniture in warm woods. The mosaic tile flooring in the lobby is a custom pattern inspired by the map of Kitchener’s own urban grid. The second floor features a rejuvenated bar and lounge area – traditional aspects are once again referenced here, but the solid wood flooring is installed in an angular pattern, defining smaller zones within the expansive lounge. Here, guests can mingle over light snacks during social hours or relax privately, given the variety of cozy seating options. 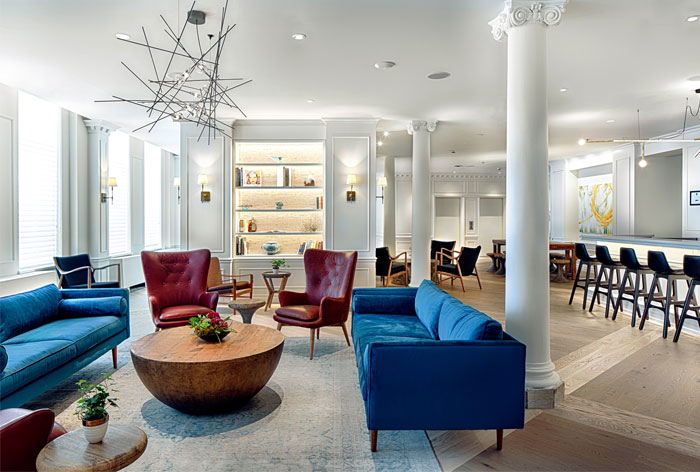 The full refurbishment of the guest floors included the creation of additional rooms in the existing floor plates, for a total of 92 rooms. Each room is unique and contains custom millwork, furnishings, and light fixtures. The vision was to breathe new life back into a tired brick building using natural finishes, energy efficient lighting, airy furniture and bright accents. Traditional trimwork was maintained to contrast with the new material palette of sleek walnut and warm ash wood in the flooring and millwork. 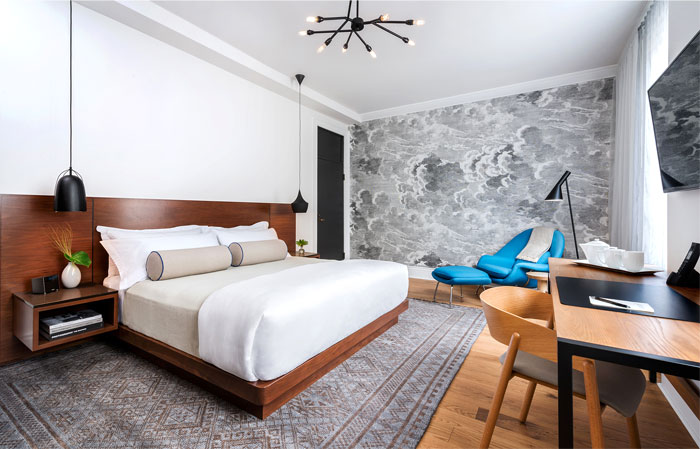 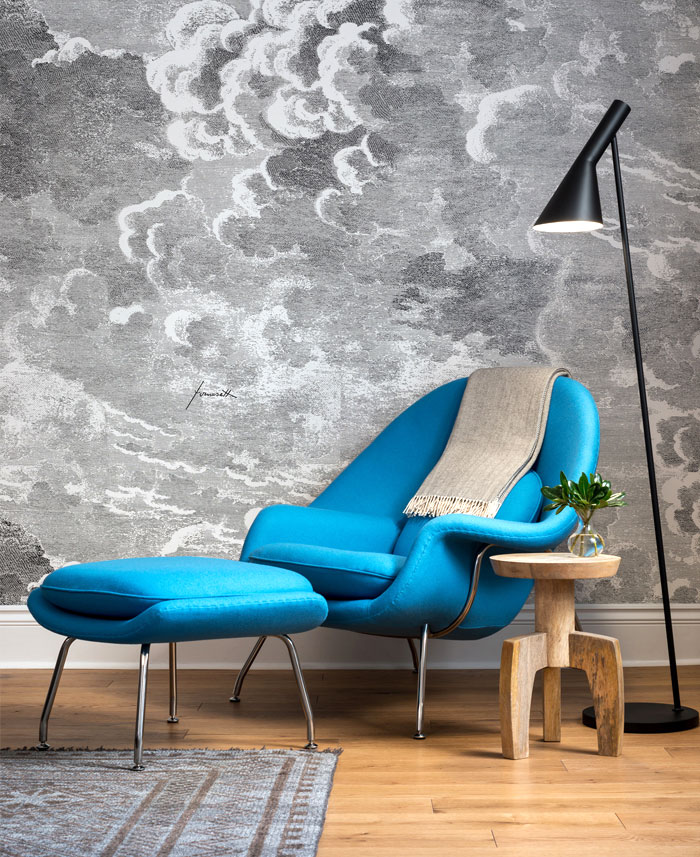 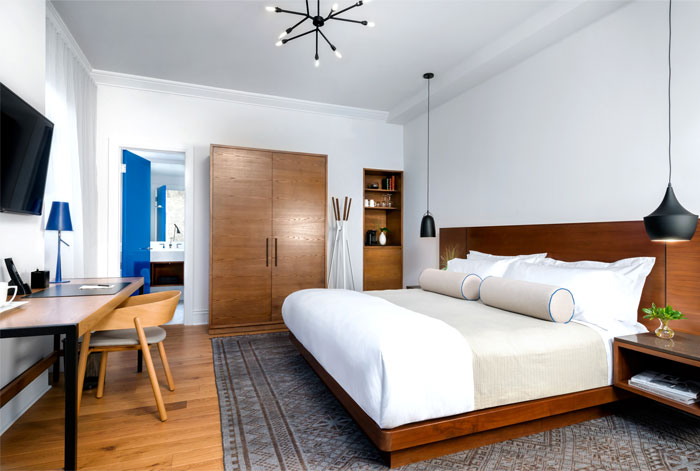 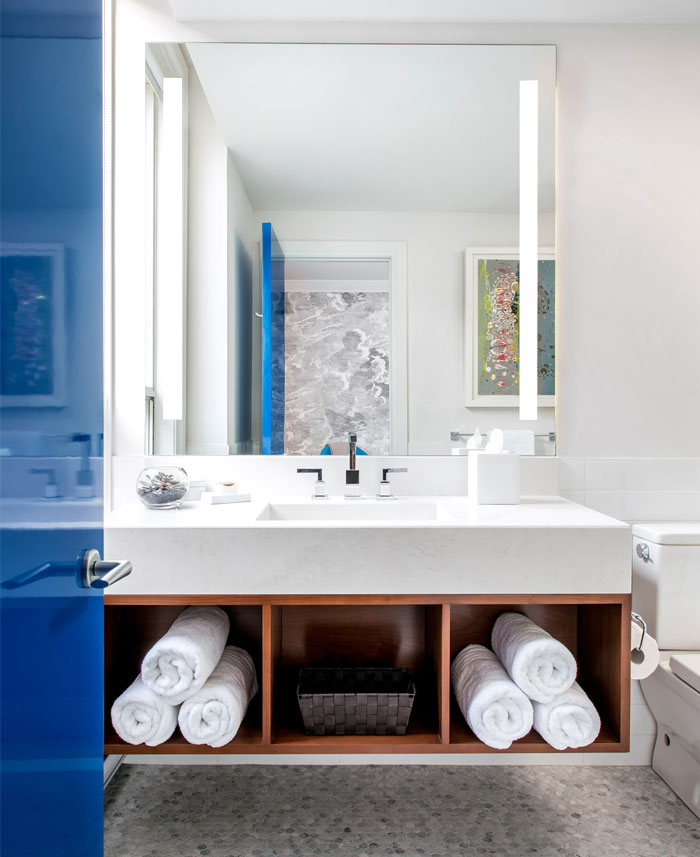 Bright pops of colour in the furniture and high gloss doors bring a fresh new look to the rooms – blue is used for smaller rooms and red for larger ones – combined with bold monochromatic graphics on feature walls. The eccentric combinations of custom-designed and sourced furniture and lighting further emphasize the hotel’s boutique nature. With a revitalization that spans from minute details to an overall urban impression, the Walper is once again poised to become the lodging destination for the region. 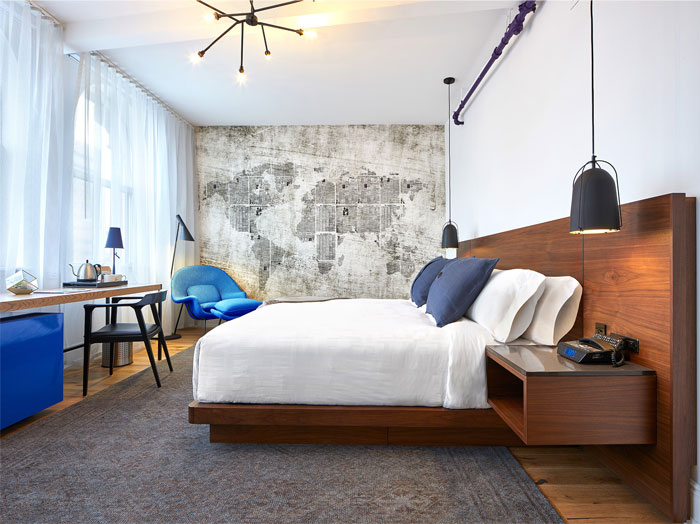 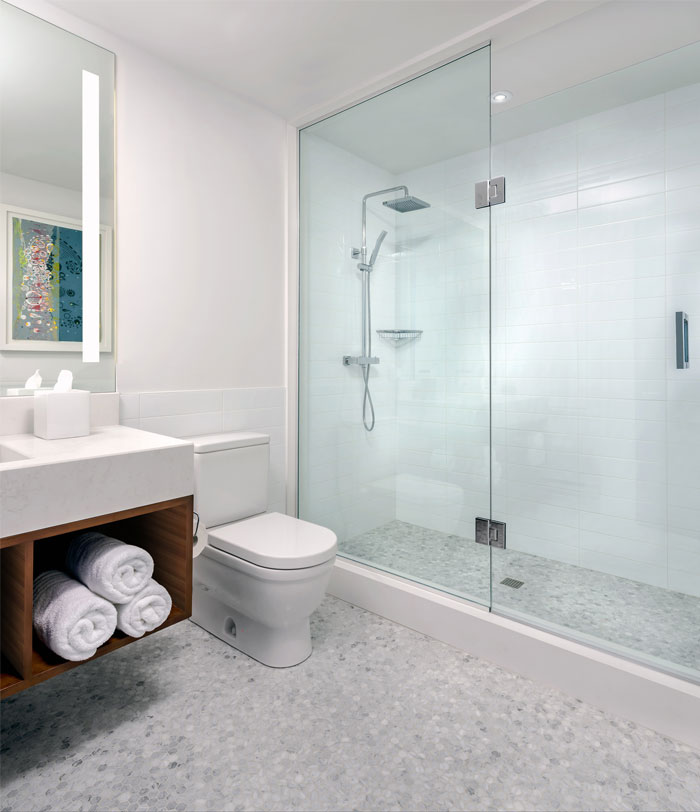 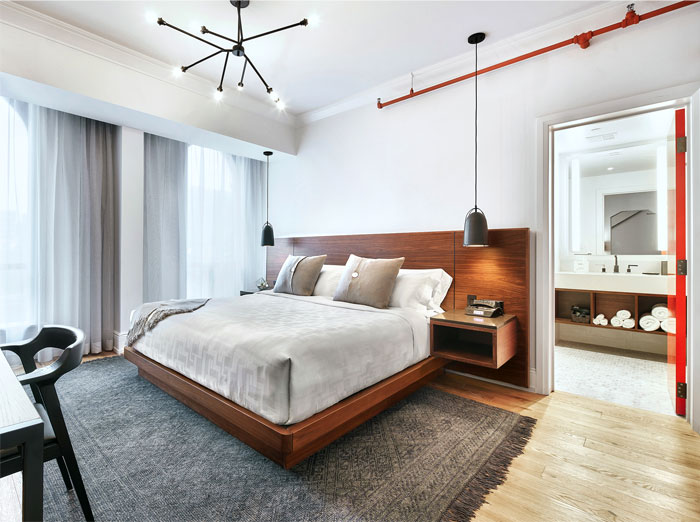 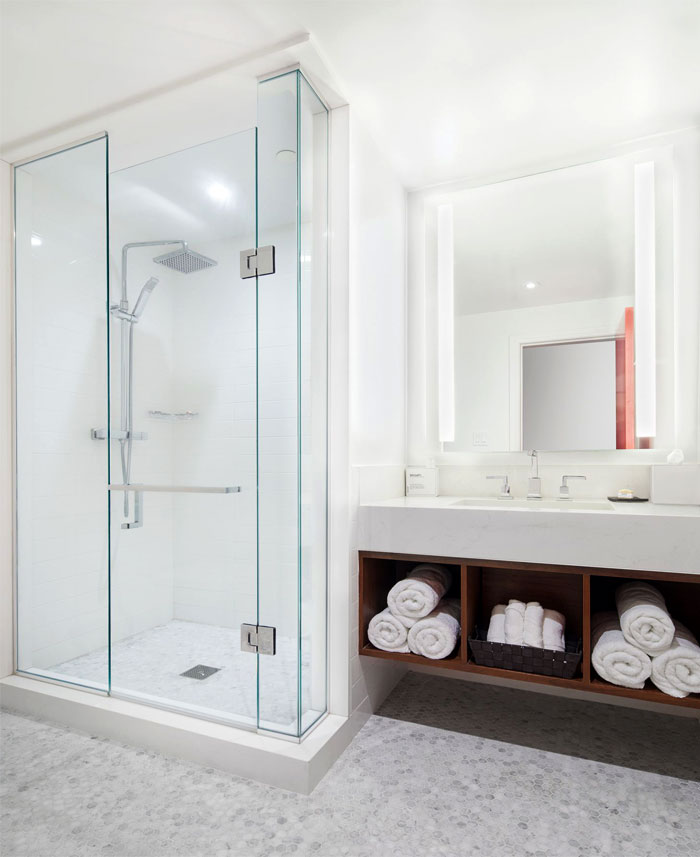 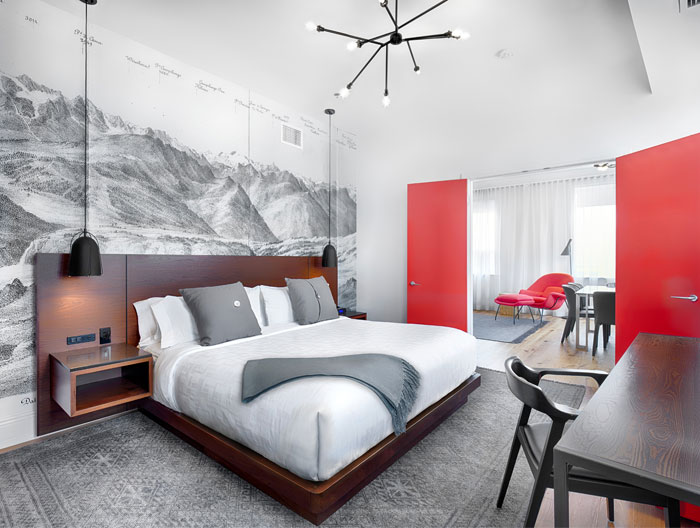 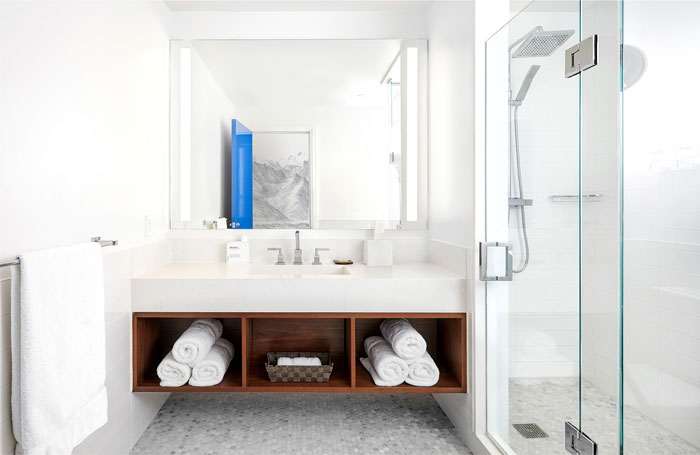