Adam Court, sole designer for luxury artisanal brand OKHA immediately fell in love with the “Verde Magnifico” marble when he saw it. The stone’s visible layers of history speak to OKHA’s South African locality of cosmopolitan, polyglot and multi-cultural charm. Court conceived of Magnifico side and Magnifico coffee table together. 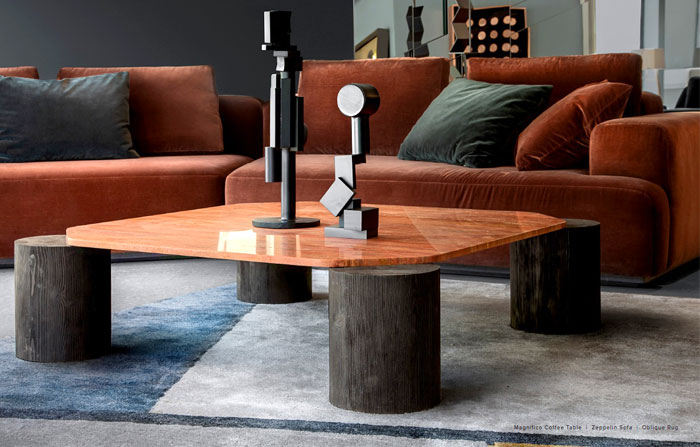 A pair of hand-crafted tables, whose varying sizes and weights represent OKHA’s small artisanal position as well as its global expression; their irregular shape of perfect triangle and perfect square cut off at the edges are testament to the vast natural geologic surroundings of Cape Town and South Africa which inform OKHA’s design process and choice of materials. 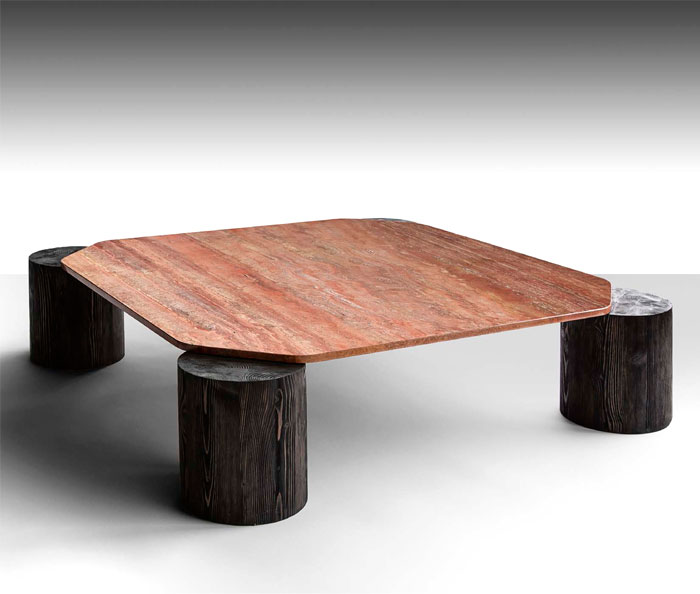 Marble is a metamorphic rock; it forms the backbone of empire and artefacts, it is created when sedimentary limestone is compressed by movement of the earth’s crust; the intense heat and pressure causing the stone’s crystals to grow and interlock forging a new and denser type of stone, marble as we know it. 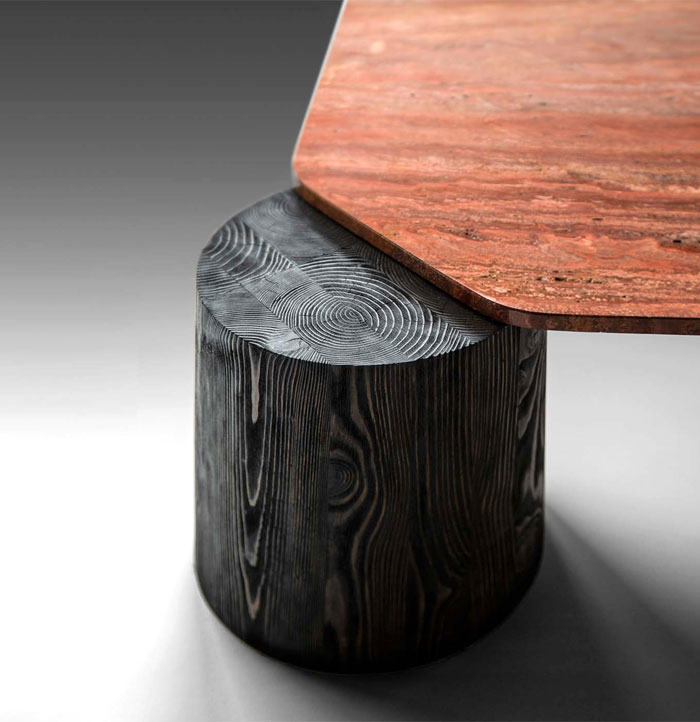 The Magnifico Coffee table’s Mars red “Flame Travertine” distinctly reveals the original sedimentary layers, most likely deposited by hot springs. Made in South Africa where much of the country’s rocky terrain is characterised by its Mars red hue. The Flame Red Travertine top of the Magnifico coffee table straddles the muscular Larch timber legs, effecting a beautifully bizarre and primitive cosmic landing pad. 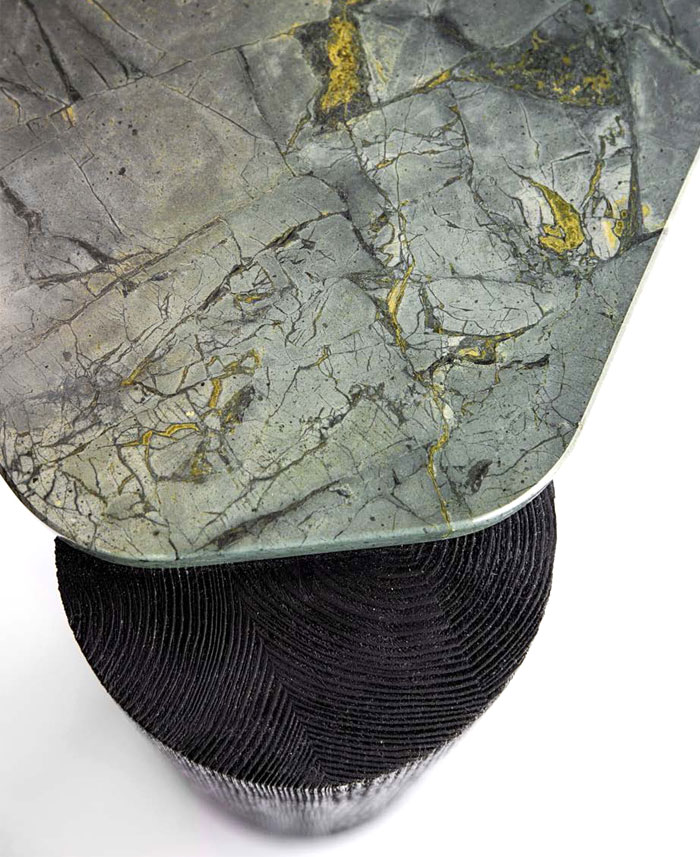 The shape of the side table brings to mind ancient symbolism and ritual, the materials and forms both speak of ancient cultures and other worlds. Made from the wood of the Larch tree, a conifer dominant in the boreal forests of Siberia and Canada, the table legs are over-scaled, intentionally exposed beyond the table top edge to produce the concept of weight pushing down in a playful over-exaggeration. The Brutalist cylindrical legs have been wire-brushed to remove the soft pulp and emphasise their graphic carbon stained detail. 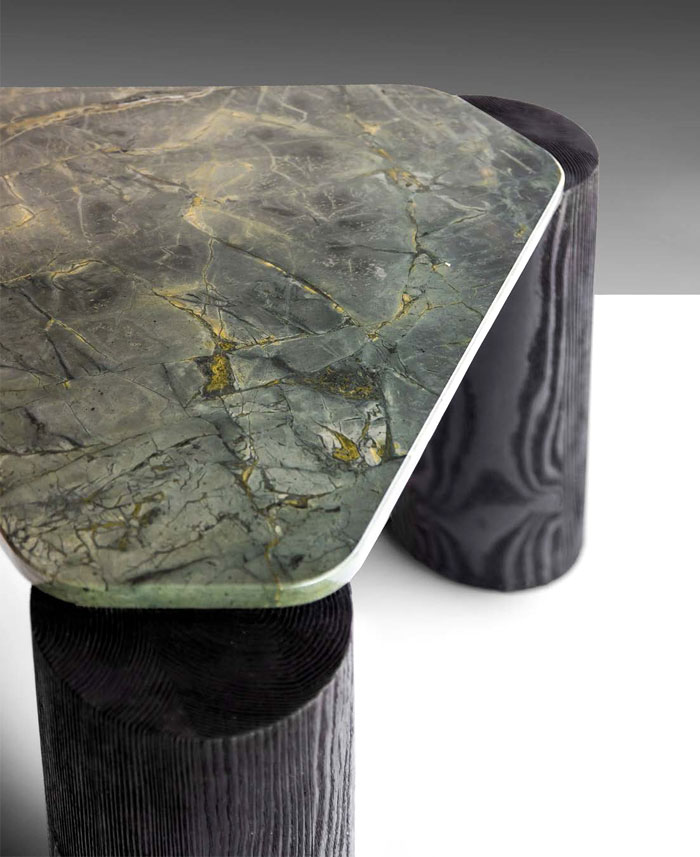 The marble top of the Magnifico side table, from which Magnifico earns its name is evidence that marble can be forged beneath omnidirectional pressure; the interlacing threads of lighter and darker greens in its polished surface swirl organically, the original direction of their sediment shrouded in mystery. Brand: OKHA; Product Name: Magnifico Coffee and Side Table; Designer: Adam Court; Photography: Niel Vosloo; Text: Tara Asia Meeran; 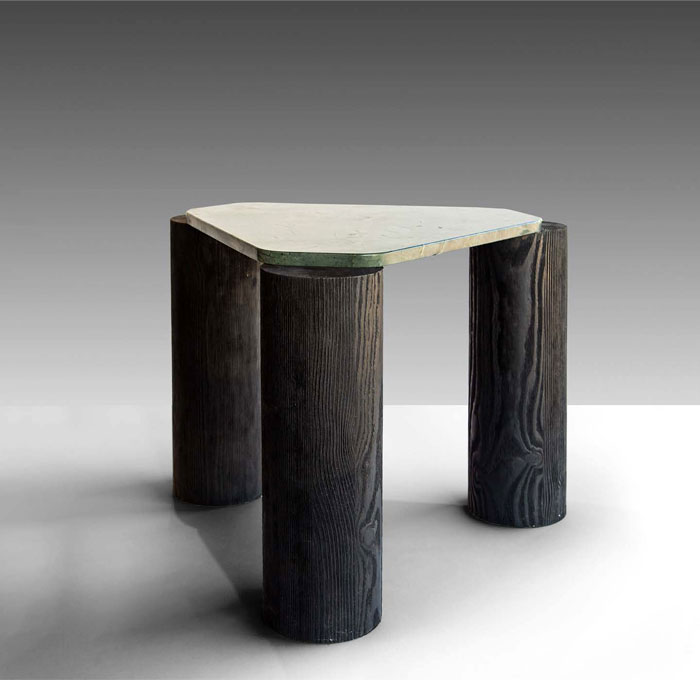