For the design of his apartment in Kiev, Patrick {Patrick is a successful businessman, American born in Germany and owner of the largest club in the USA and a radio station in Panama Beach City. He holds a law degree from the University of Miami and a degree in Banking and Finance from the Georgia State University in Atlanta. He has visited more than 48 nations living in Rome, London, Dusseldorf, Boston, Miami, Atlanta, Frankfurt and Vienna.} has relied on ZOOI studio asking designers to show the benefits of living in a historic home, introducing loft elements and making this place comfortable and welcoming, as well as modern. 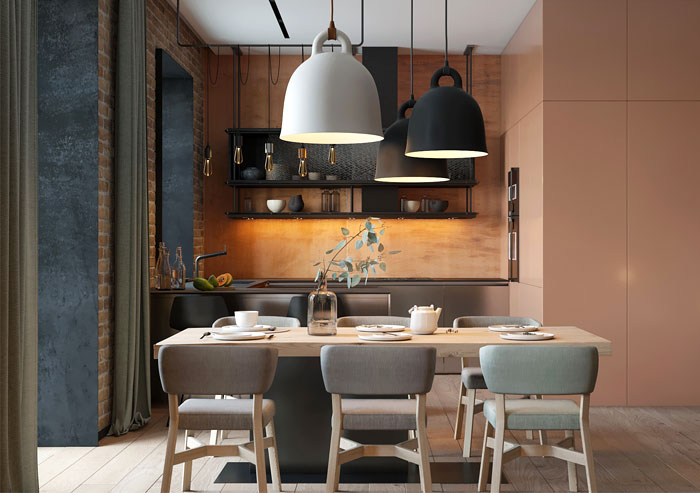 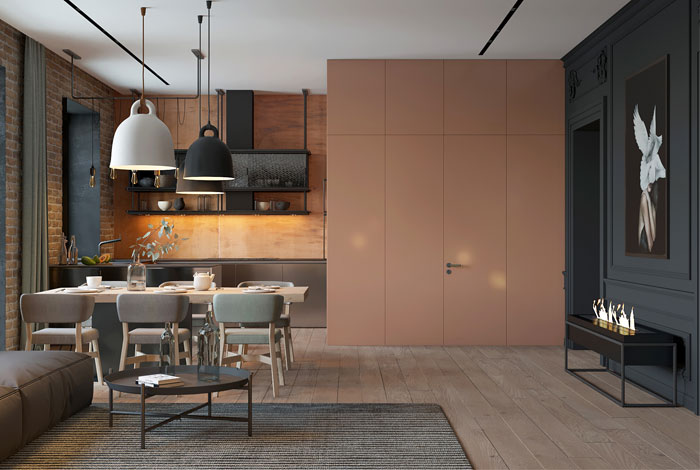 After introducing various ideas for the re-planning of this apartment, the designers Maxim Doschinsky and Pavel Voytov decided for a total area of 135 sq.m. with a spacious open space consisting of a kitchen, living room and corridor and implementing a minimalist, modern and contemporary style. 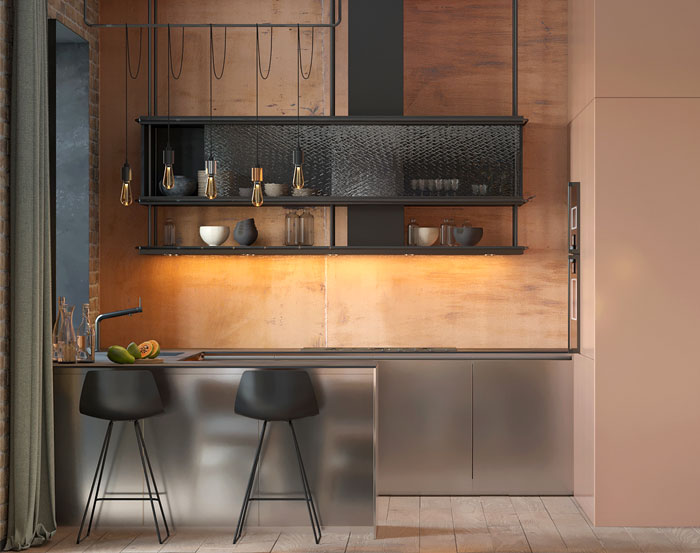 Immediately after the entrance, a wall decorated with veneer hides a storage system that the customer did not notice at a first observation. The entrance that leads to the living room has the shape of an arch composed of two mirrors on its sides. 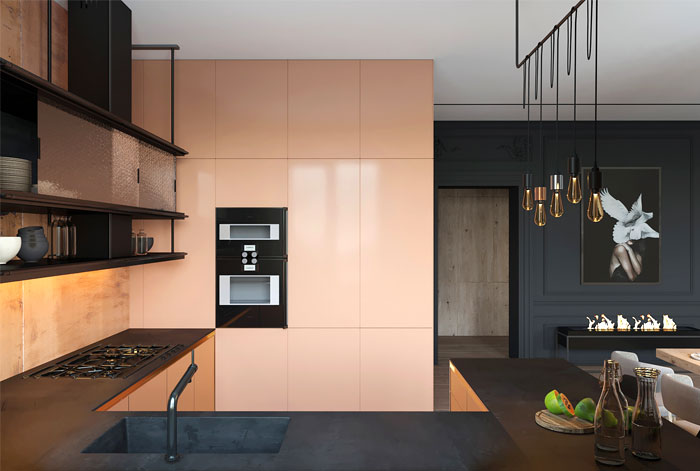 To highlight the elements that required the client, that is the historicity of the place, the size of the area, the height of the ceilings and the modernity of the interior, ZOOI designers used an eclectic style. After having found a beautiful original brick, during the first phase the walls were covered with plaster and then decorated with modern paintings of mysterious female figures and breathtaking landscapes. 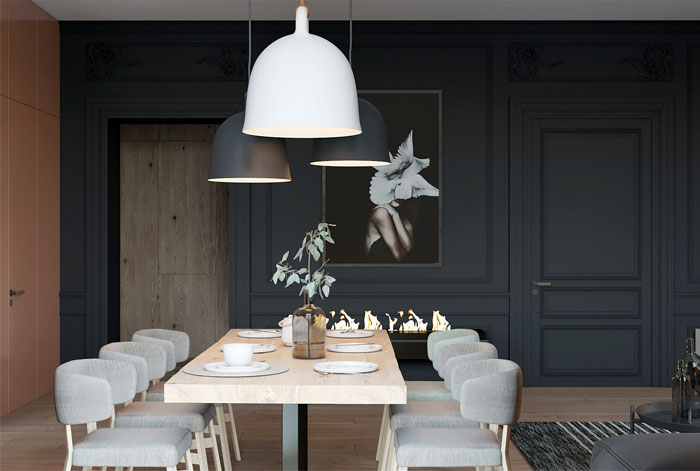 The kitchen is modern, compact and functional, and consists of a hidden storage system but with all that is needed, while the rest of the module decorates the bathroom entrance, where the characterizing elements are the unique paintings and the black marble tiles. 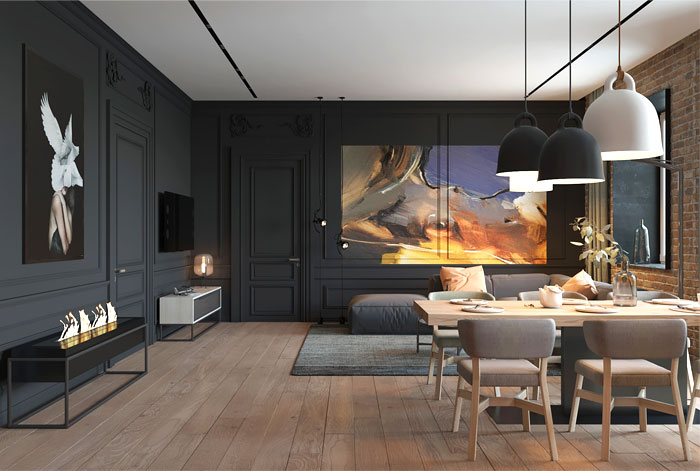 In the master bedroom the particularity is given by the wardrobe placed inside a gray block, giving the impression of access to a new room. The bedroom is also composed of two open brick walls that have been decorated in frosted green, taking into account the design and the daylight features of this room. 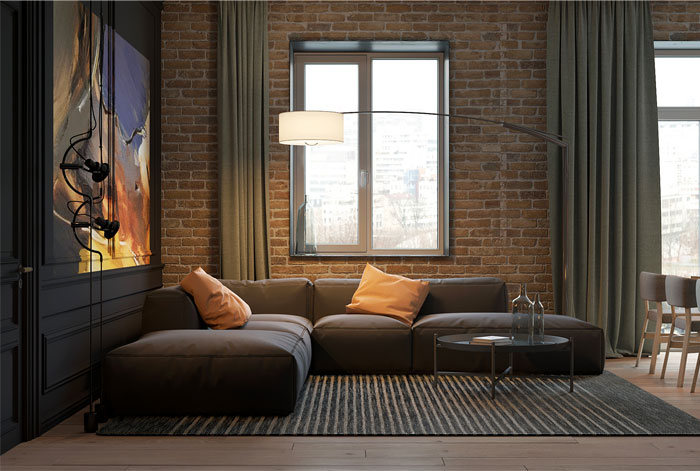 Almost invisible, behind the bed was created a study/work area with a desk, where Patrick can exploit the light coming from the nearby window and at the same time have a direct view to the television, if he wanted to. The black and white color balance and their contrast with natural light, in addition to the classic and loft style used, makes the guest room a unique, bright and very welcoming environment. 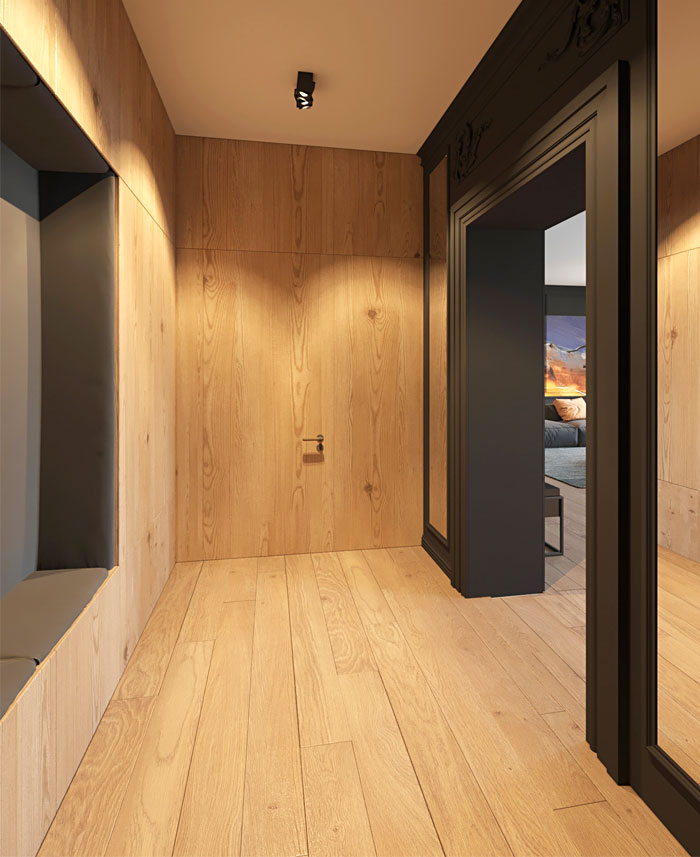 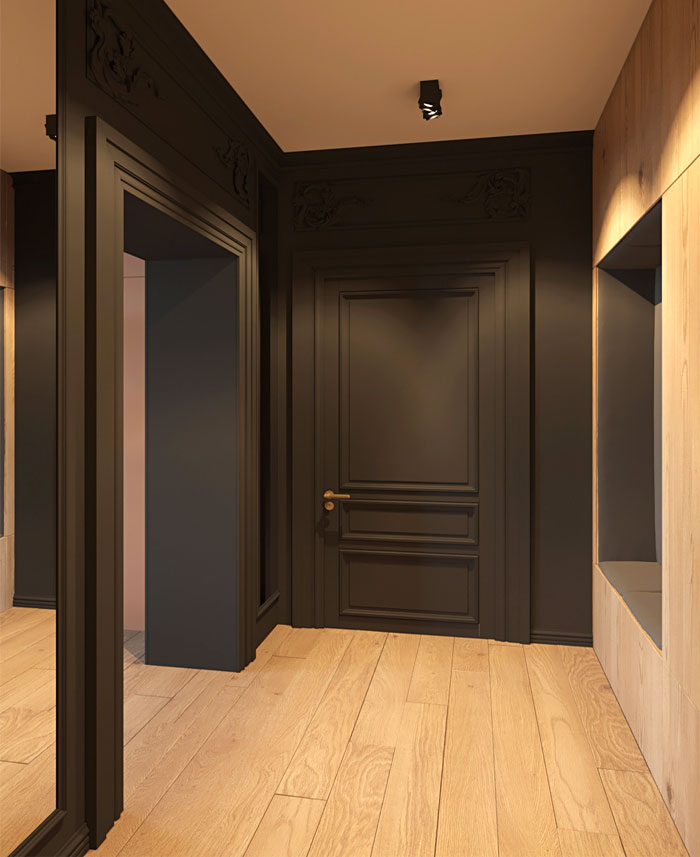 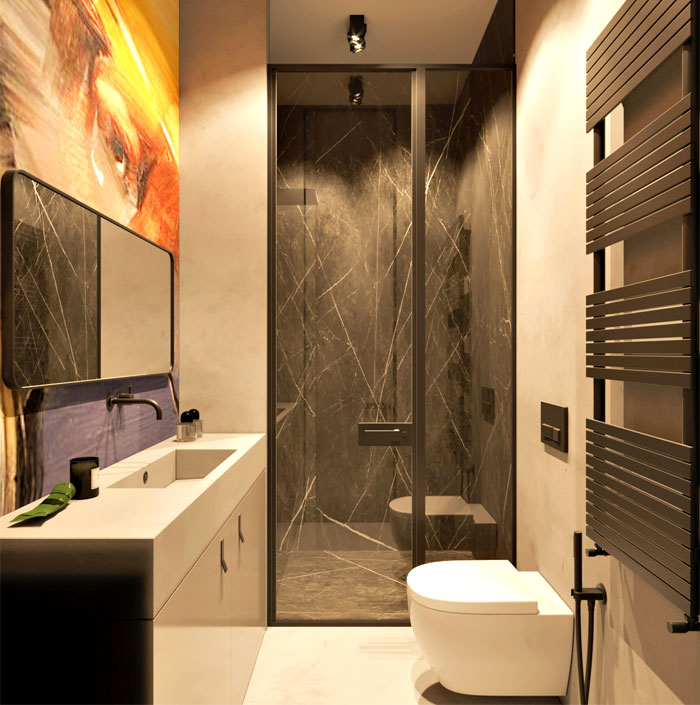 During the redevelopment phase of the main bathroom, the designers chose to change the overall style of this room, decorating it with black marble tiles and choosing the latest modern sanitary fittings from the best European factories. In addition, the positions of the bathtub and the shower box have been moved to the window. 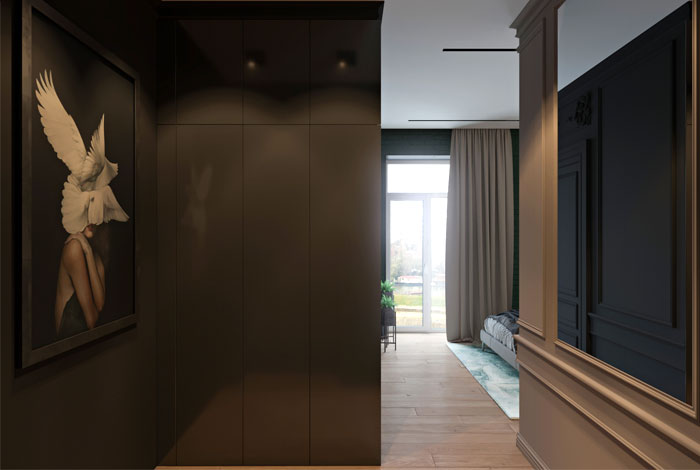 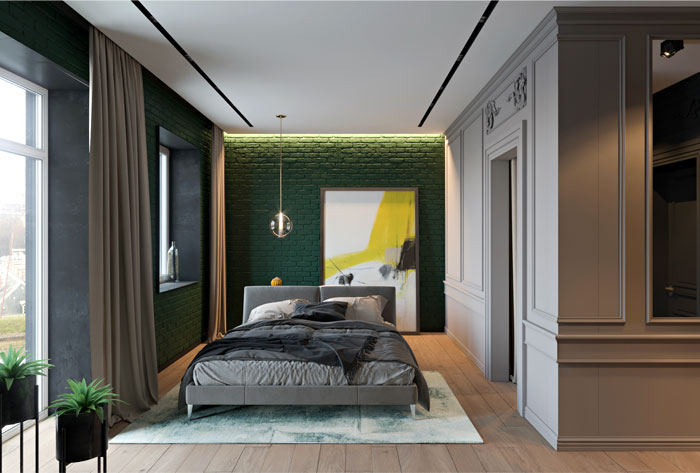 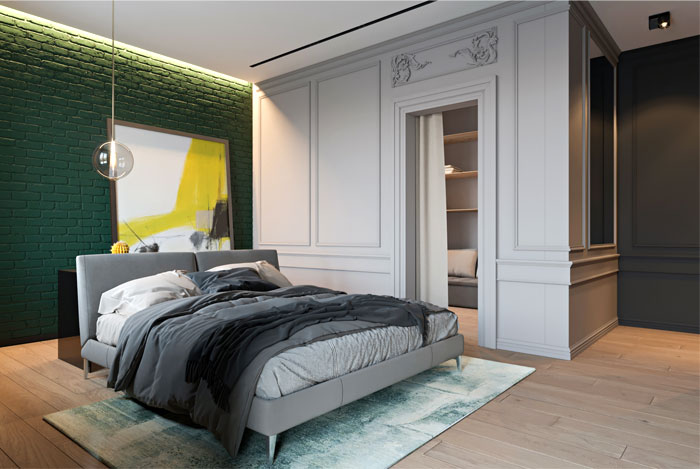 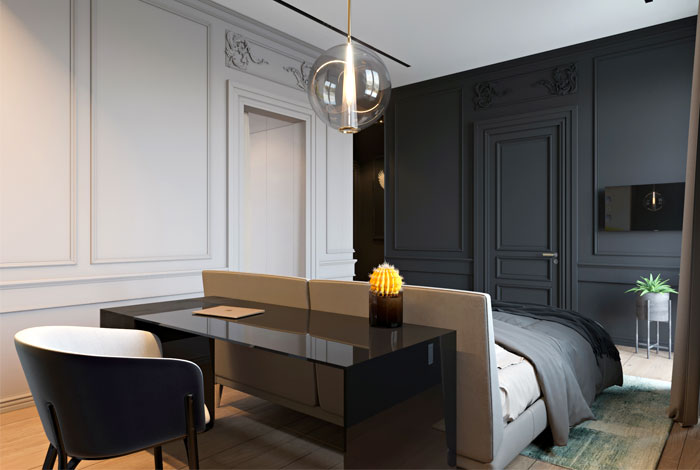 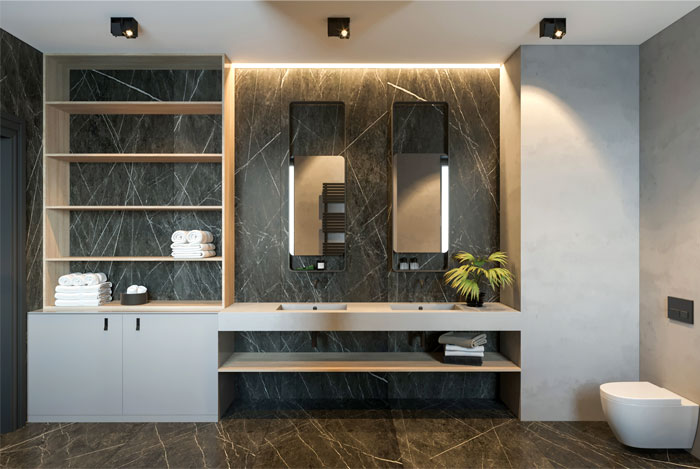 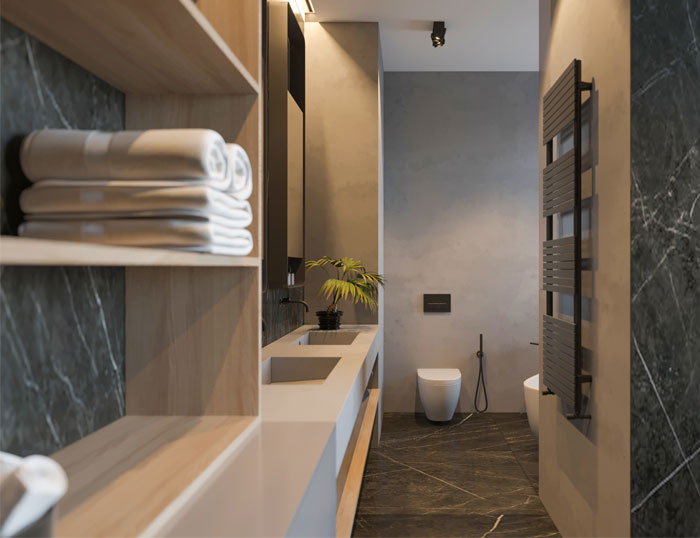 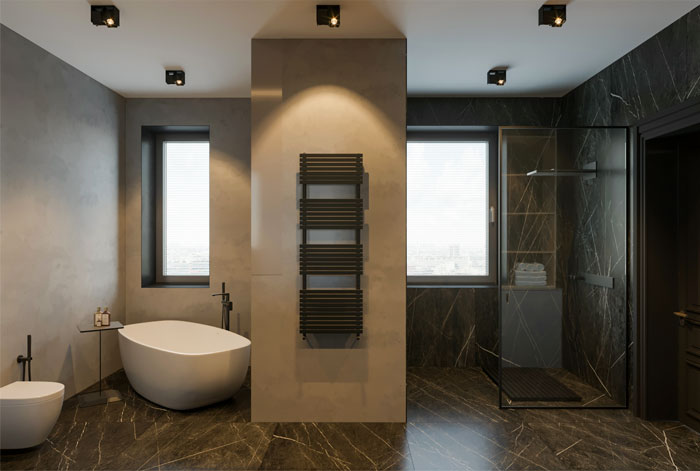 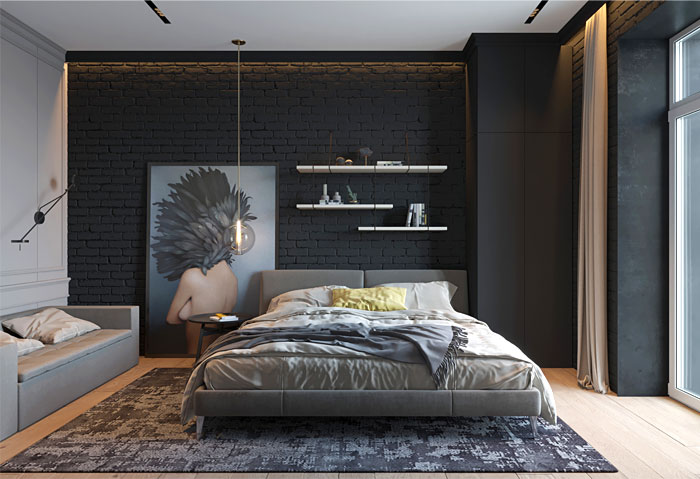 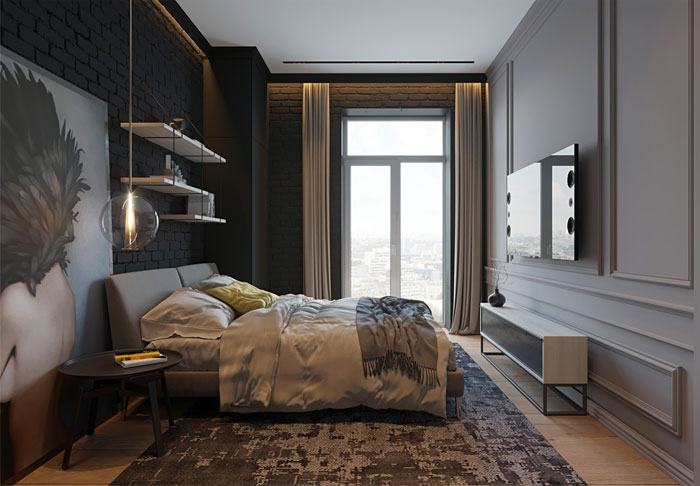 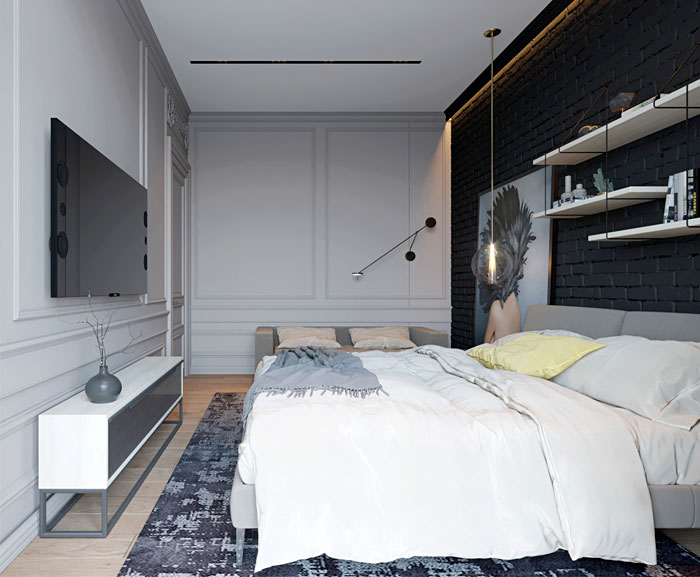