What could be better than the nice brewed beer? Only a mountain of juicy ribs and a group of friends to drink and eat it all with fun! The pub REBERBAR has been created exactly with this gastronomic idea! 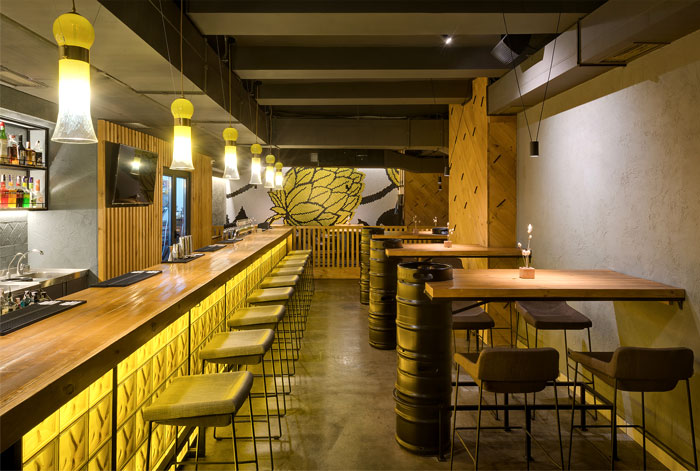 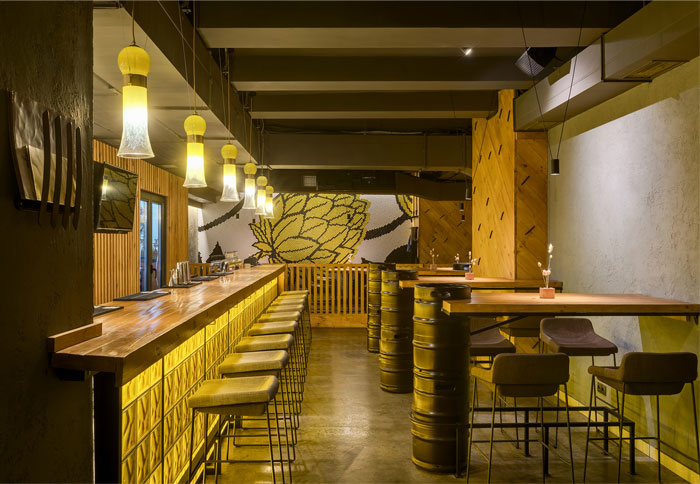 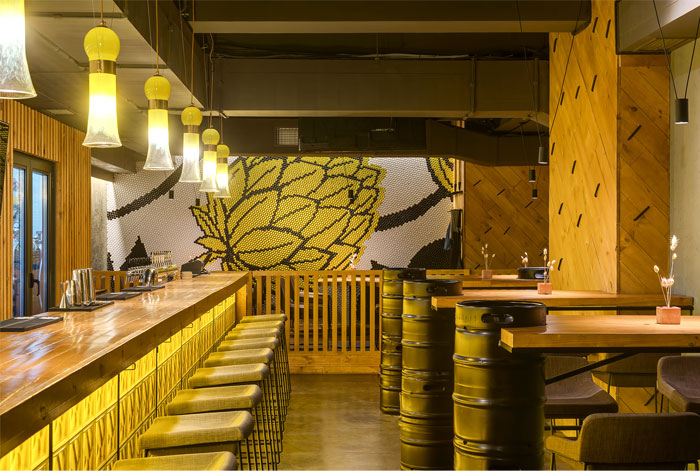 The founder of the bar is the Ukrainian brand of brewing “CHUMAKOV”.  The studio YUDIN Design has realized the idea of this new bar; the designers Aleksandr and Vladimir Yudin should have created the brand identity and the interior design from zero. At first they proposed the name that in Ukrainian sounds like bar of ribs, but in English it sounds near “beer bar”. In the result this name gives a clear idea about this pub to the citizens and the tourists. 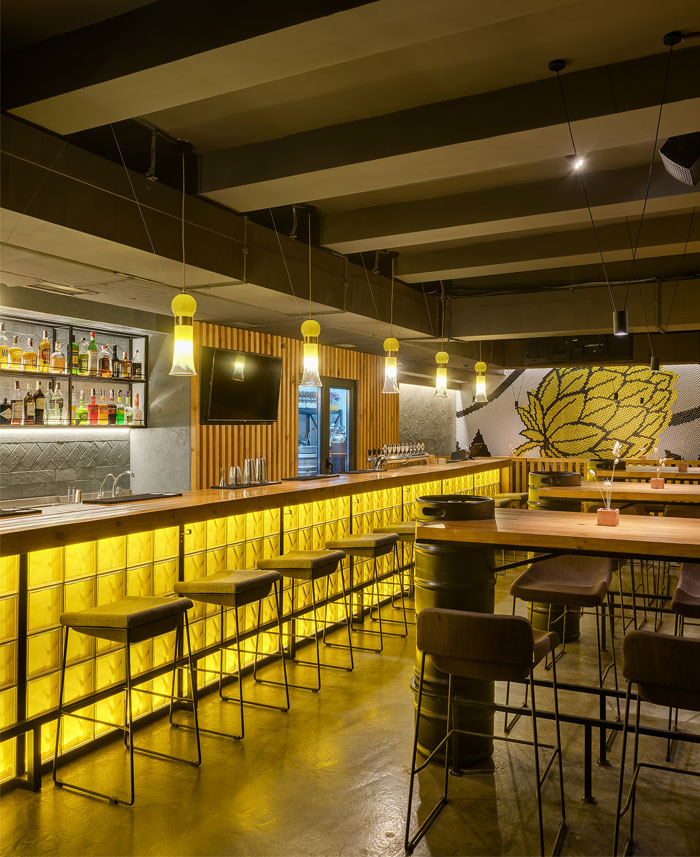 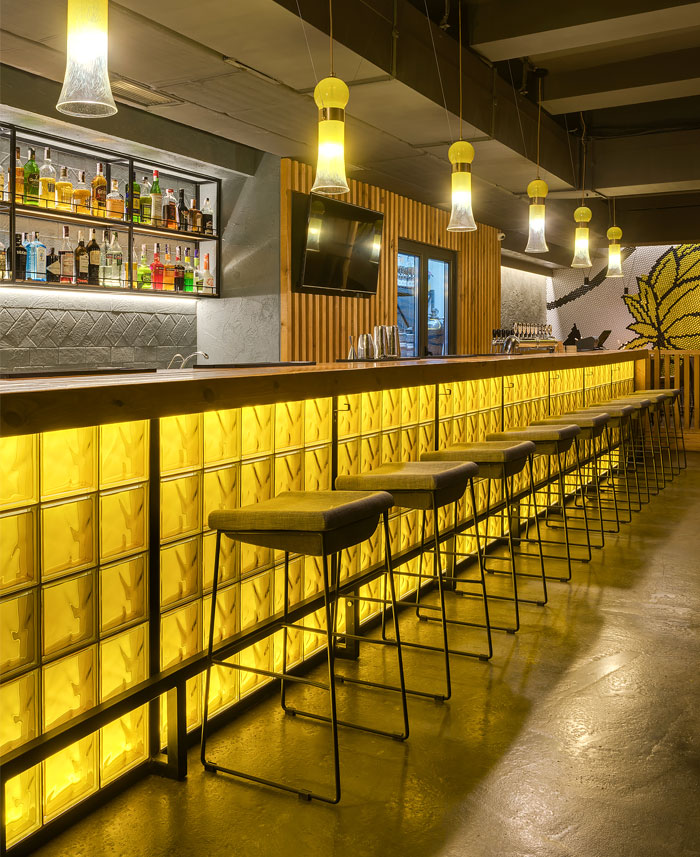 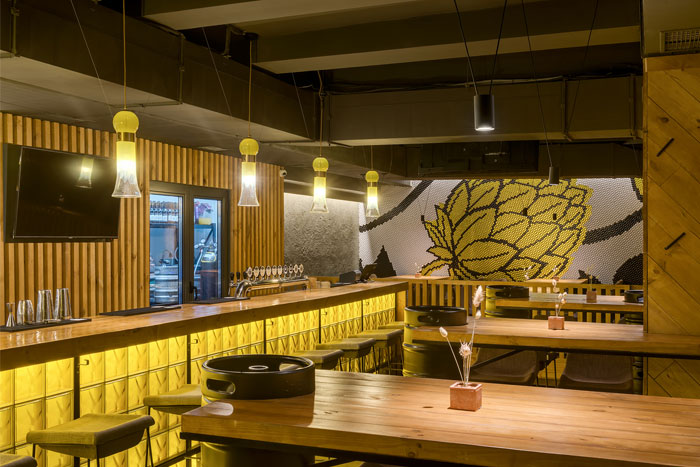 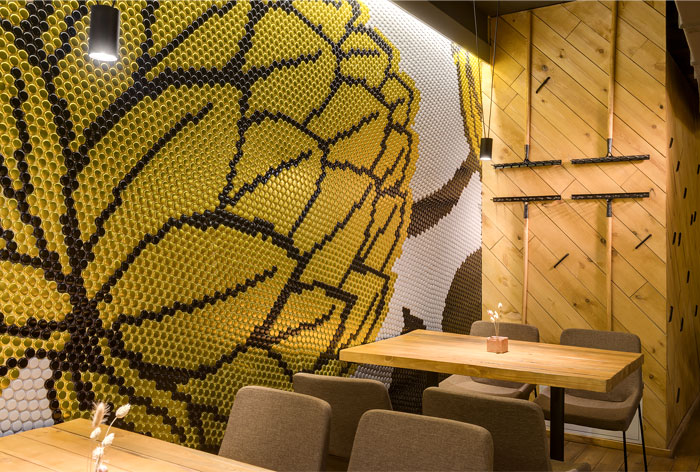 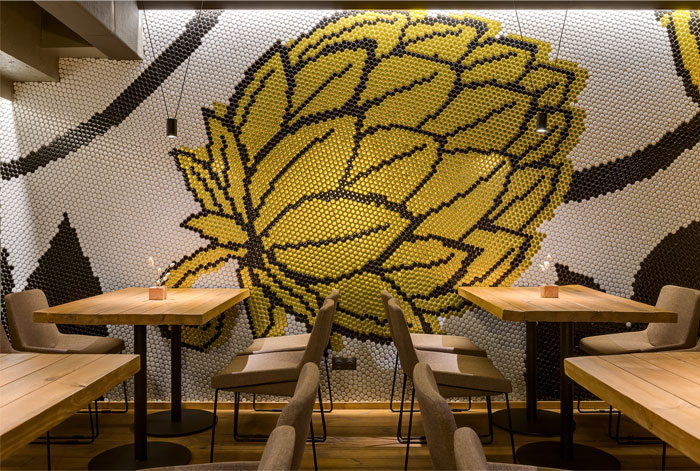 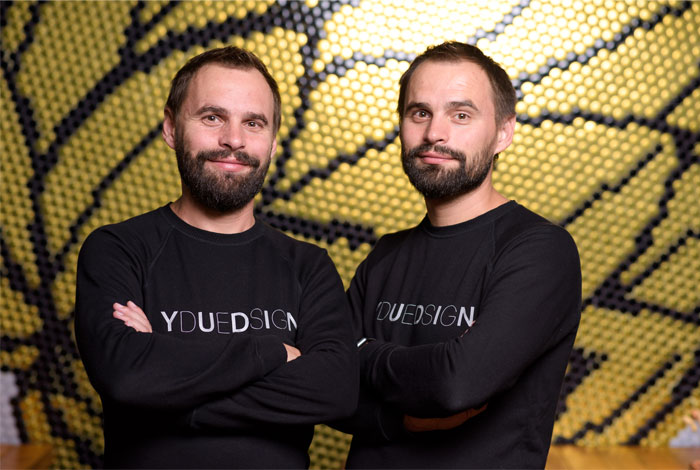 Tables and seats are made from the rude wood. Also the lumber is used for the zoning of the different spaces, with the same principle as in the Oktoberfest. The tables are able to accommodate from 4 to the 12 people. The functional and intuitionally easy zoning gives the possibility to feel the proximity with the own company and with all guests of the RE-BERBAR. 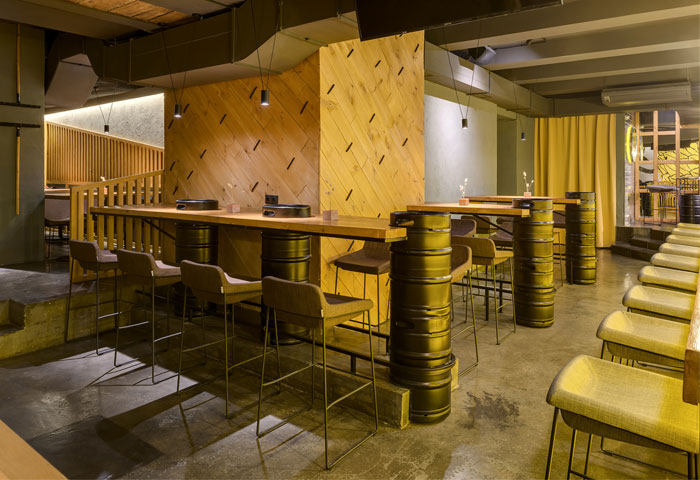 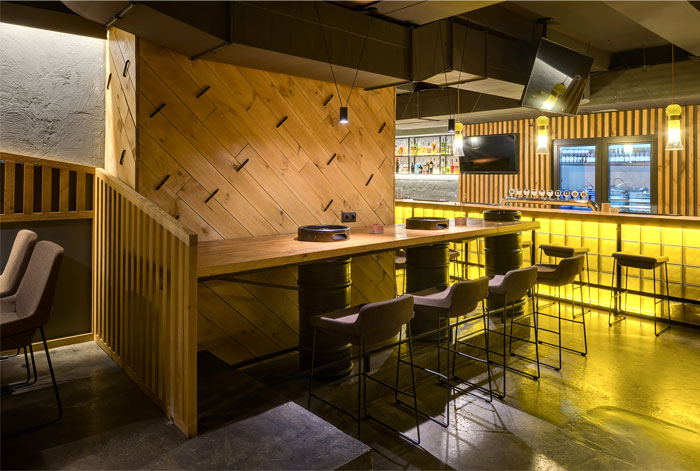 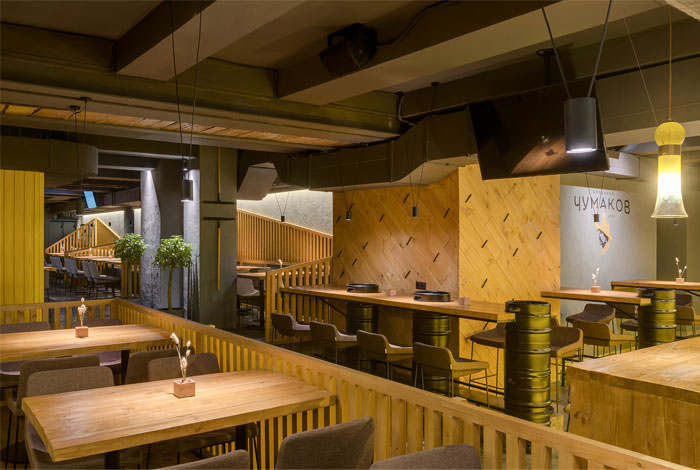 The 3 meters length bar is made as a cold room: here in the illuminated glass showcase you can see which ribs you will be served on the table today. Another one significant and stylish element in the design of the bar is the metal beer kegs, in which the beer of its own production waits its time. Those who brew a good beer can talk about it for hours. In the REBERBAR this conversation can be reduced to the very es-sence: in this pub there’s also a beer room with huge cisterns. 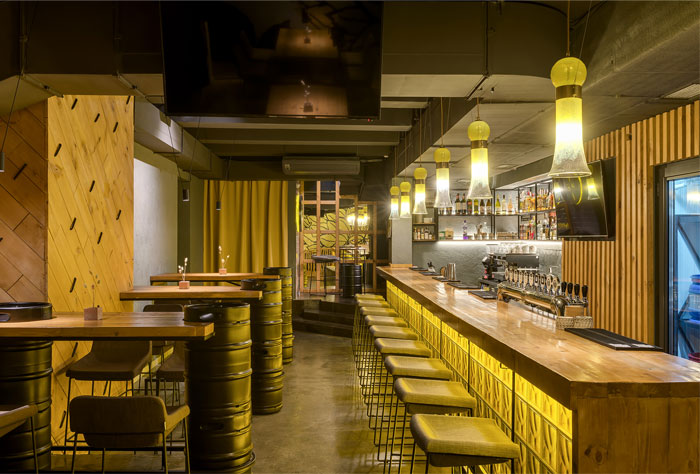 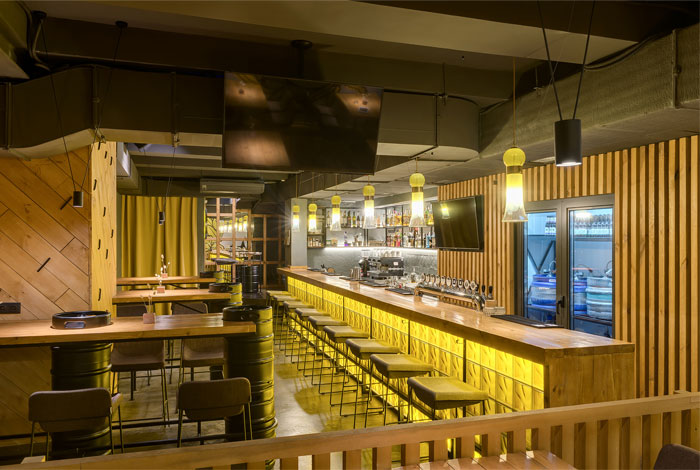 When the soul is pleased with the beer, it wants to fly. For this reason in the bar a scene is equipped, where the cover bands are playing in the evenings. Throughout the day, the mood of the visitors rises along with the rhythms of the Ukrainian rock music. The studio YUDIN Design has chosen the interior lighting from the judgments about comfort and the theme of the institution: the technical light helps comfortably to illuminate all areas, and the original designer lights in the shape of a beer yard remind that here the beer flows like a river! 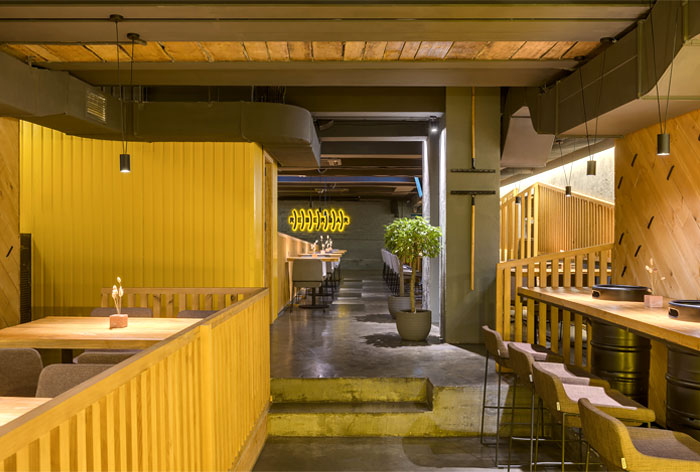 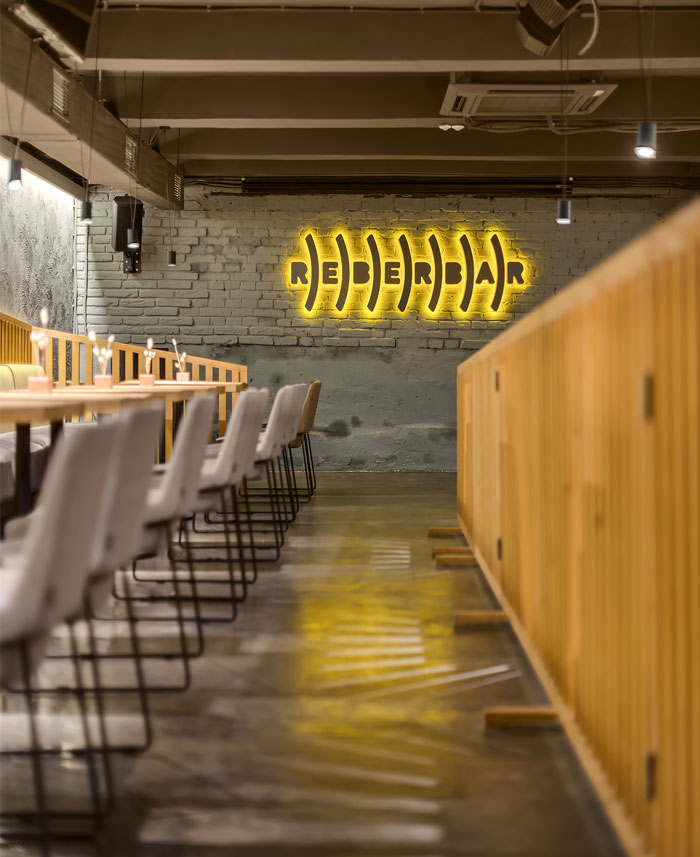 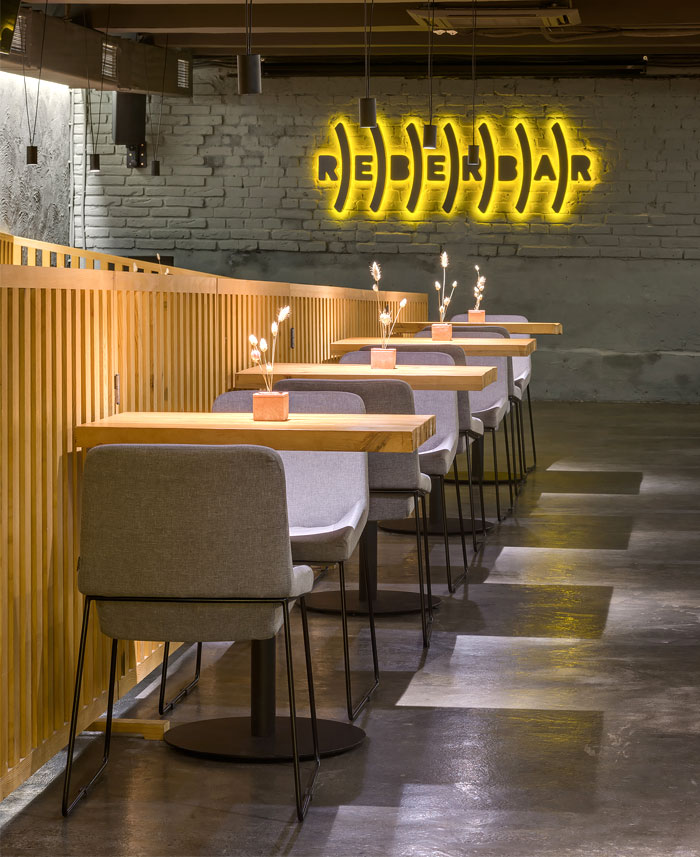 In the interior there are also other decorative elements that make this place special and create the right atmosphere for the best moments of life. The mosaic in the form of a hop flower is shining with silver and gold, and acts as a recognizable background. Upon a closer inspection, the secret of the wall ornament is revealed: its puzzles from the beer caps. It’s one of the most stylish and recognizable selfie-zones in Kiev! This idea and also all décor and furniture have been realised by the designers Aleksandr and Vladimir Yudin in their workshop YUDIN Product. 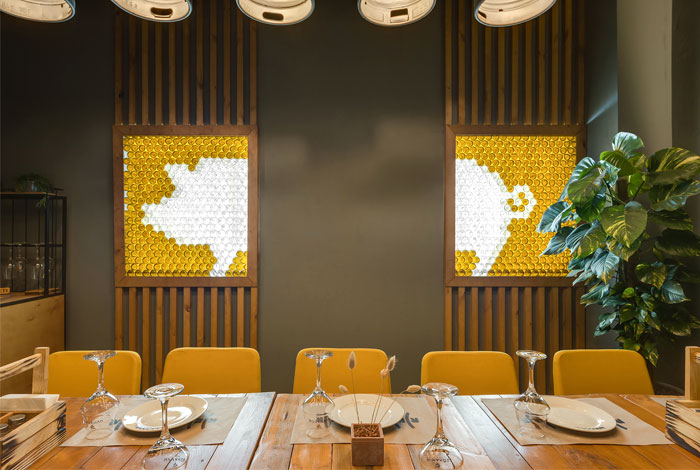 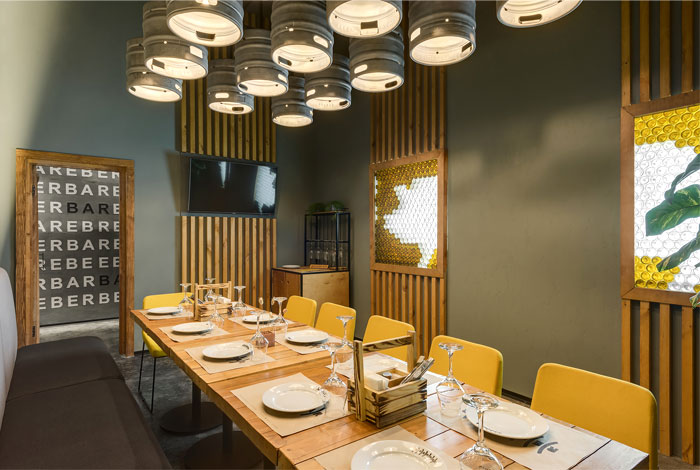 On the second floor of the restaurant there is a summer terrace, which we advice to book in advance, as REBERBAR is located in the center of Kiev. Football fans will especially appreciate the atmosphere of REBERBAR, as it is just few steps away from the country’s main stadium – the Olimpiyskiy. Nevertheless, the democratic and stylish interior and the bright conception attract people of different ages and minds. Here, in a minimal and mod-ern surrounding, everything becomes easy and soulful! The beer is as a river and the ribs a mountain! 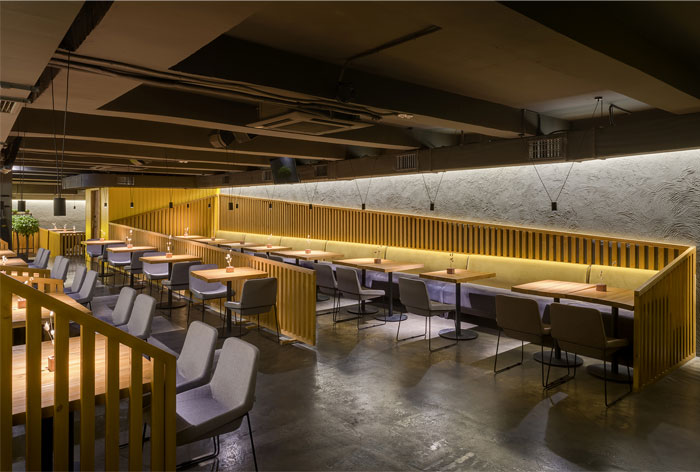 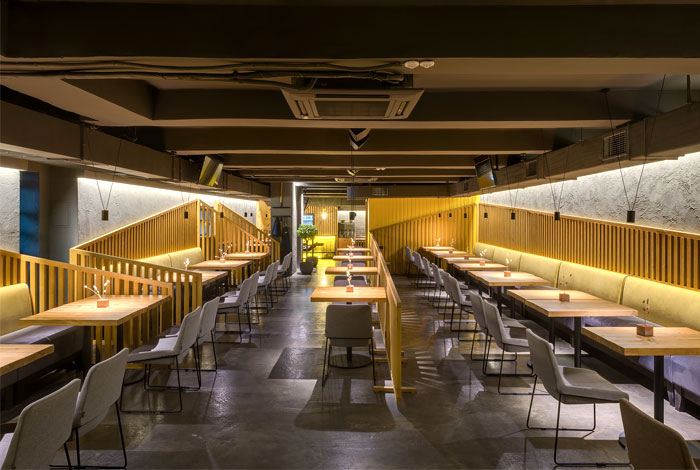 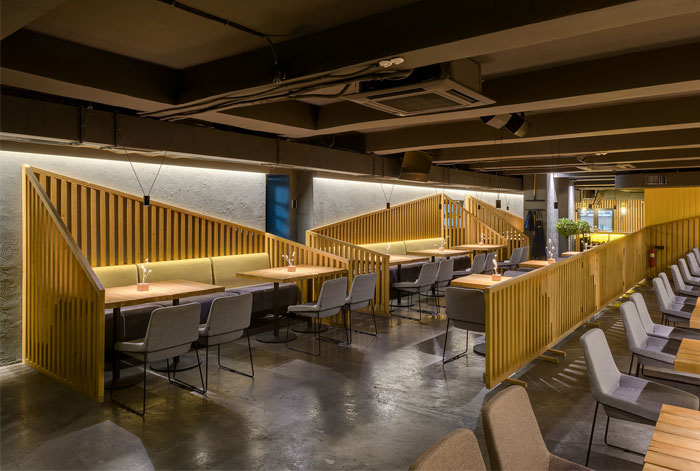 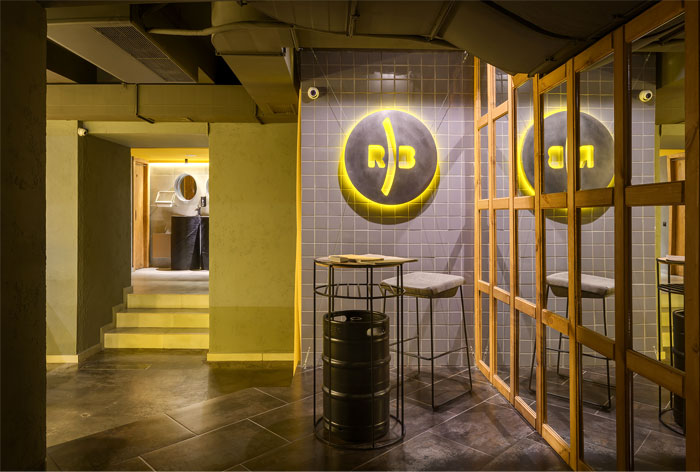 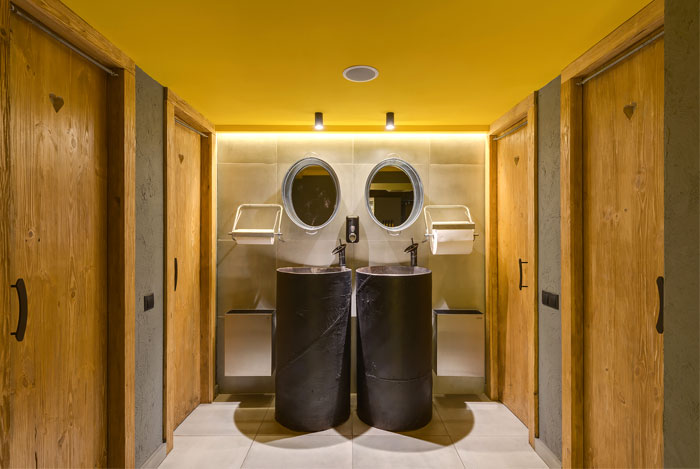