Alacati Port LaDera Hotel is located in Alacati, an Aegean town on the western coast of Turkey. Alacati has become known for its architecture, plants, windmills, and vineyards and its history dates back to the 1850’s. Being the third best windsurfing center in the world thanks to its constant wind and pure, clean sea, Alacati has also become popular more recently for its beaches, cafes and restaurants, stores and nightlife. 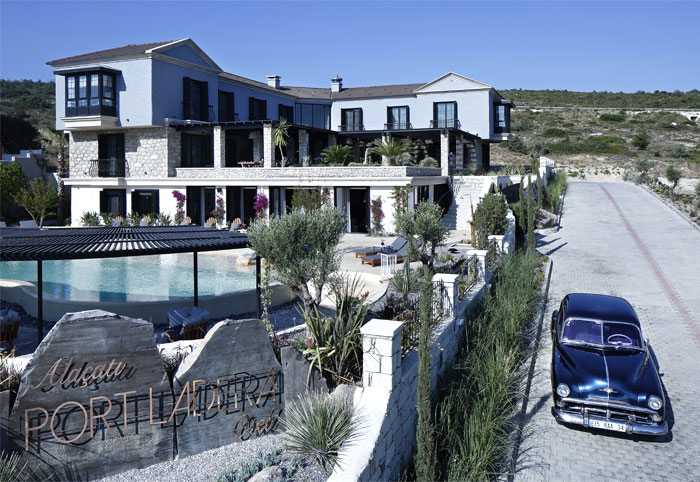 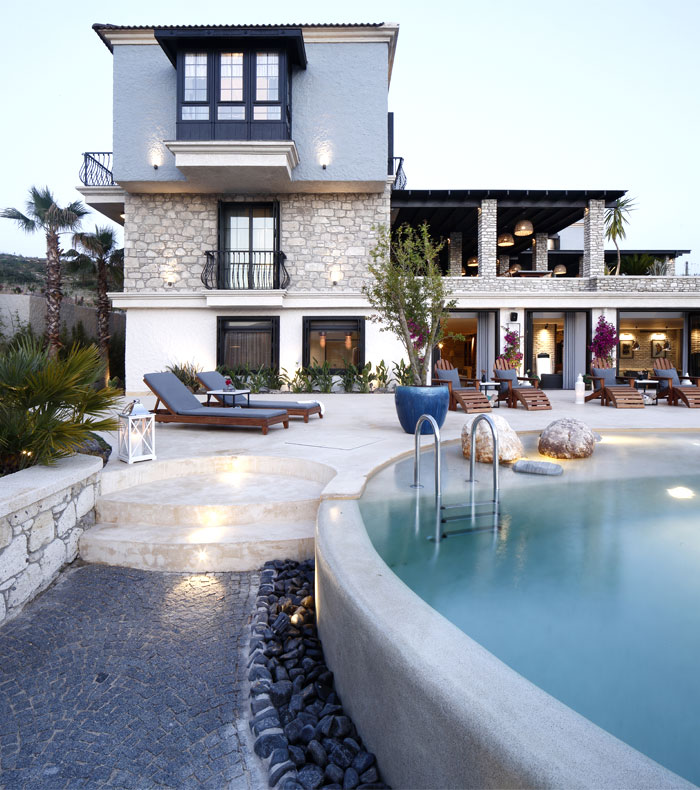 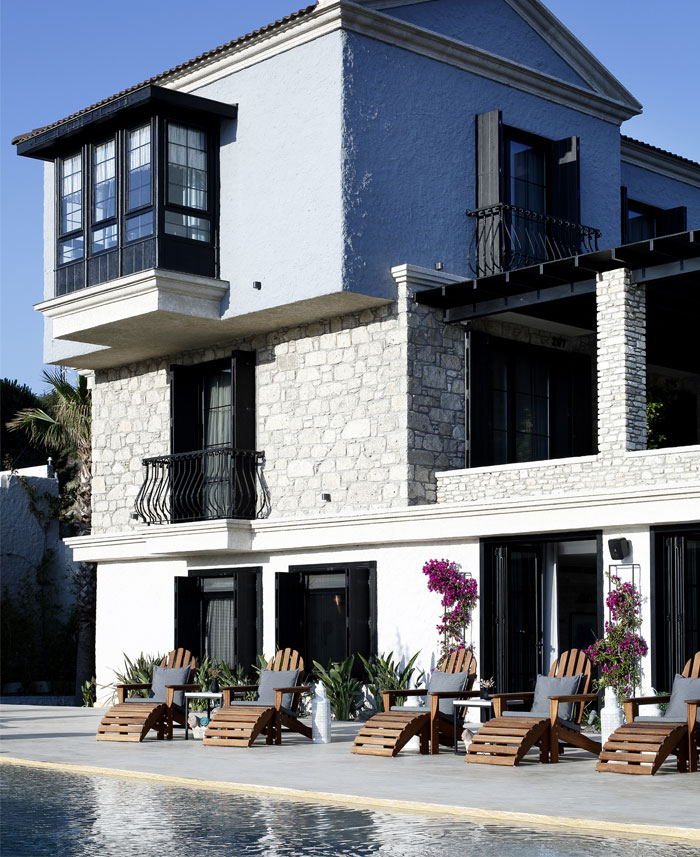 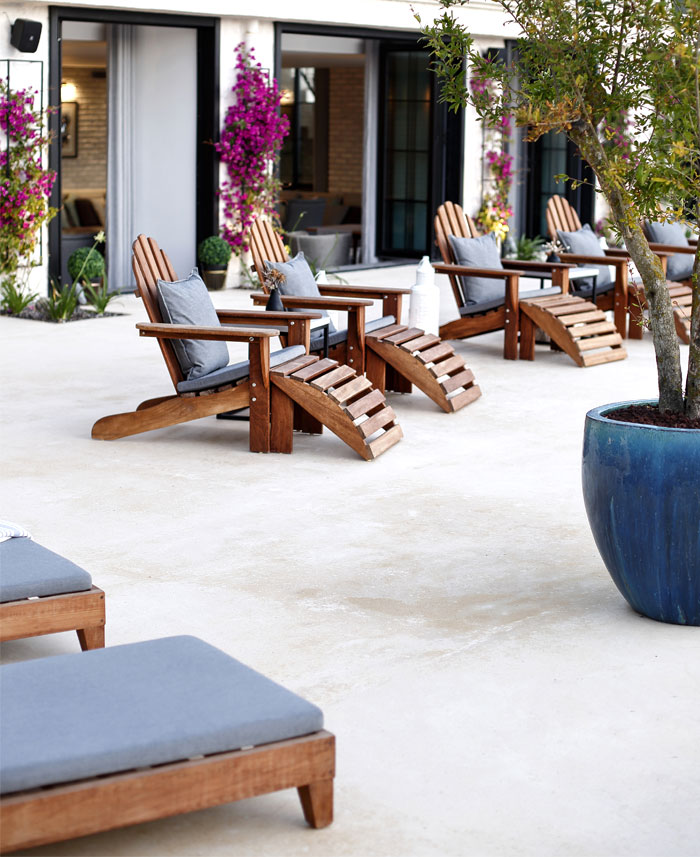 Port LaDera Hotel is set on a hillside located in a position offering charming views of Alacati Port and windsurfing center. Designed by French Architect François Spoerry, Alacati Port was built to replicate the Grimaud Port on the Cote’d Azur also created by him and famous worldwide. The villas located in the port are very charming with their small gardens and boats owned by the villa owners and anchored on the seaside. Here there are signs reminiscent of small fishing towns of the Aegean Sea integrated with the style of the Mediterranean. 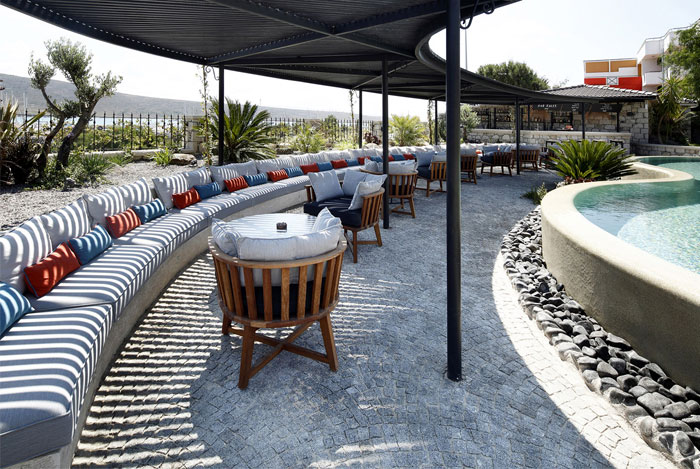 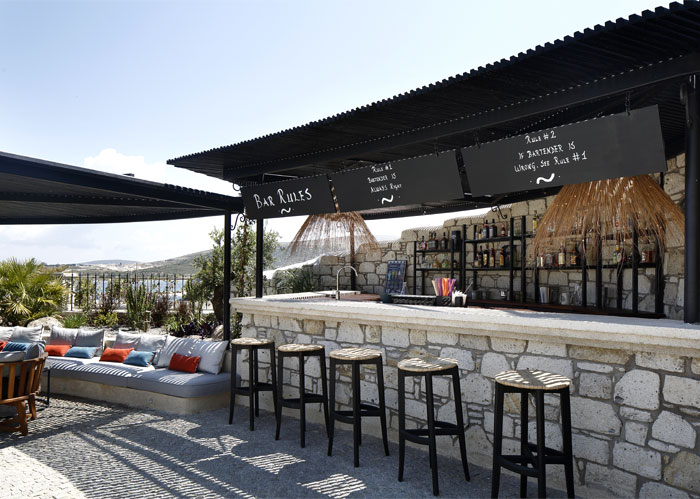 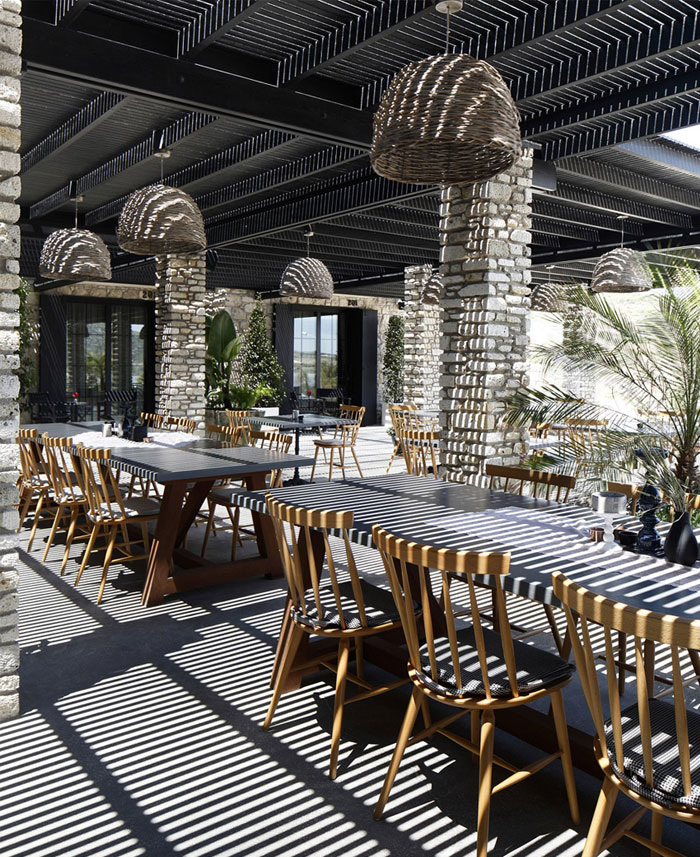 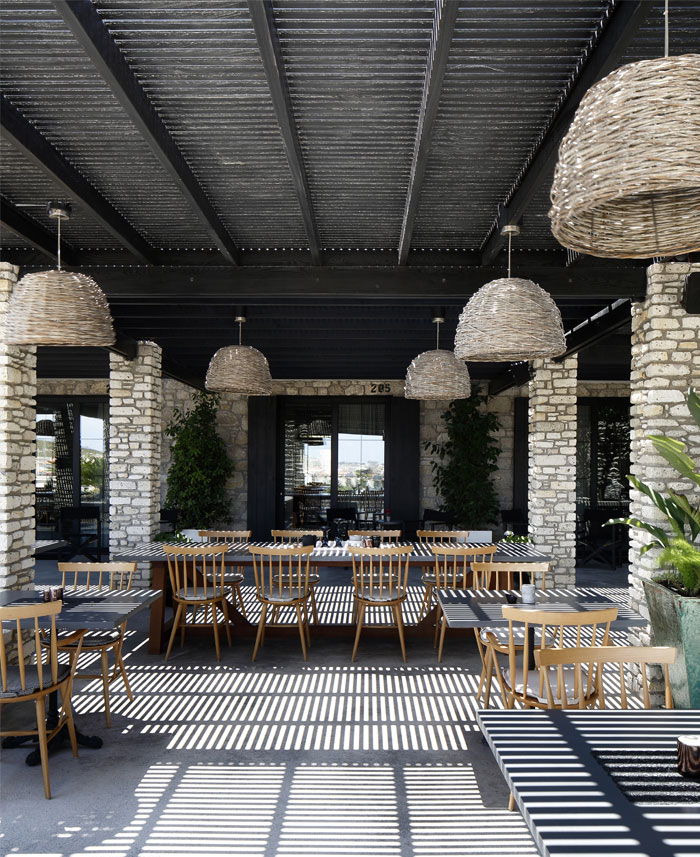 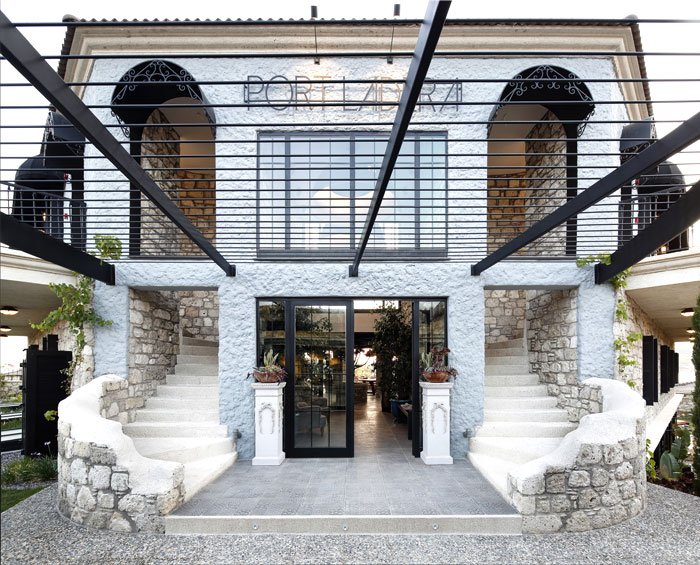 Having chosen its name meaning “port on the hill” due to its location, Port LaDera Hotel was established by three siblings from a well-known local family of the region and having business places in various parts of Alaçatı for many years. Based on the owner’s familiarity with the area and long experience gained in the service and hospitality sector, high standards and top quality were paramount. In addition to architectural renovation design, internal and external location designs, all details from landscaping to bed sheet selections, hotel logo, and printed objects have all been created by interior architect and designer Selina Kazazoglu. 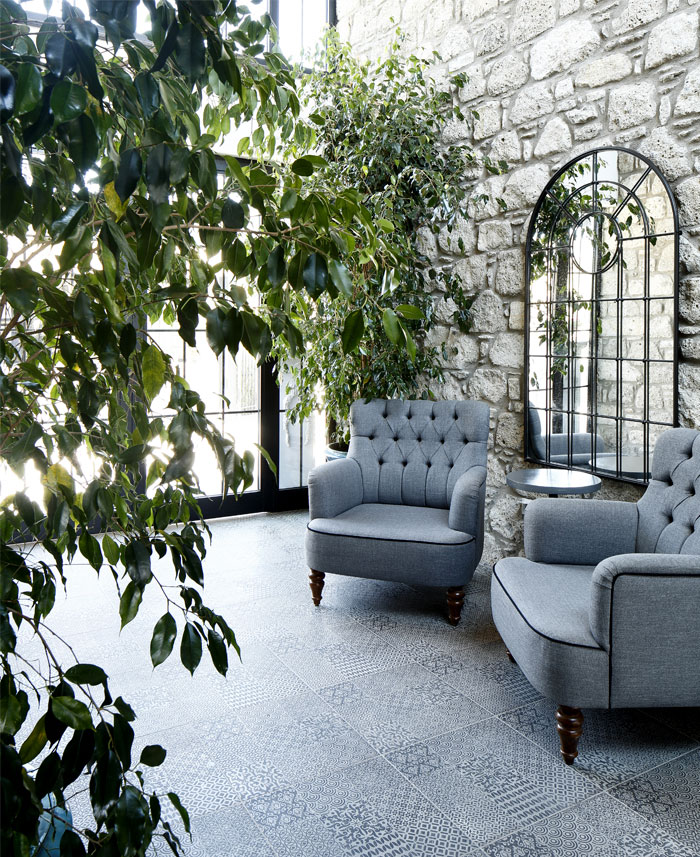 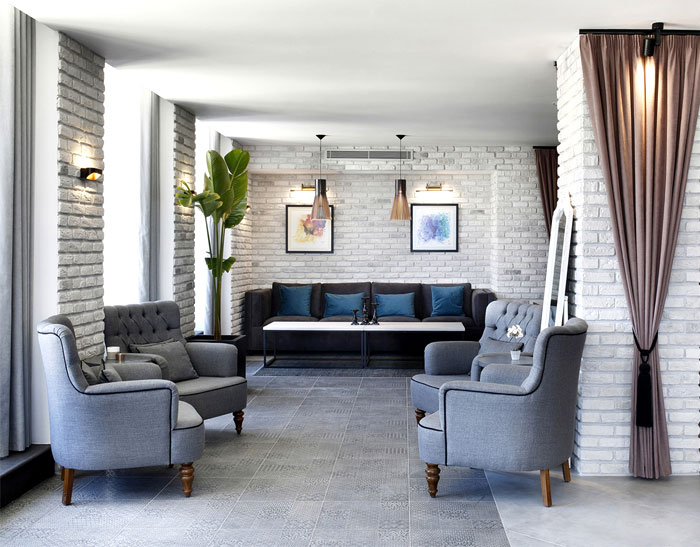 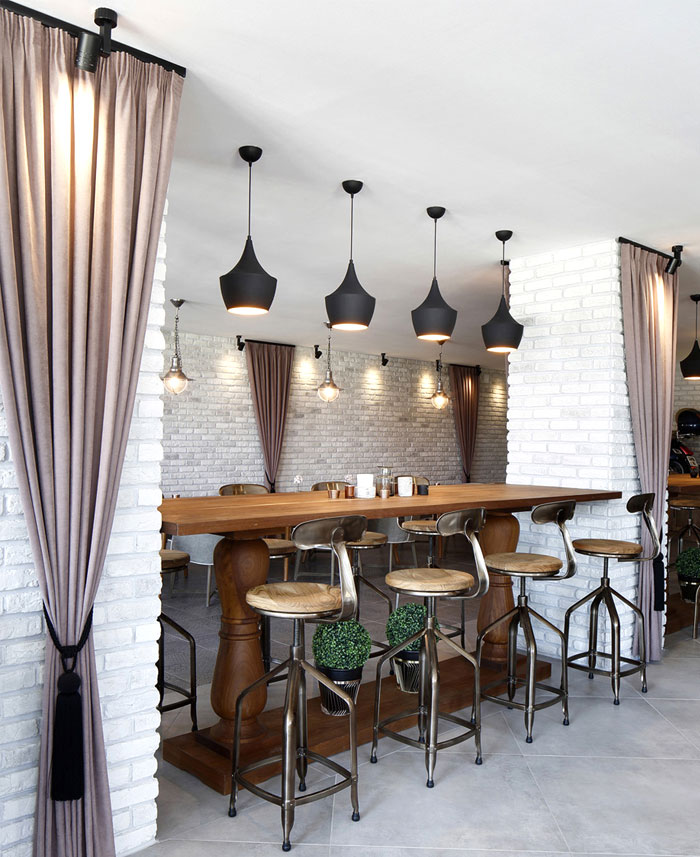 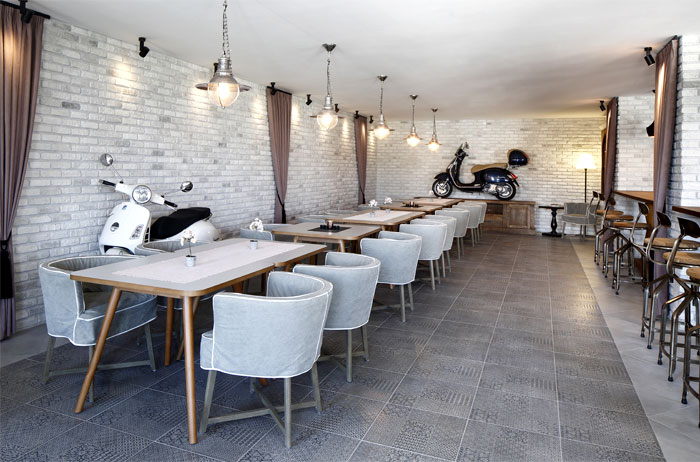 Alacati’s architectural texture and natural diversity have formed the fundamental starting point of the project. Narrow streets of the town, woodwork doors, and windows of the houses, local stones of Alaçatı used in the buildings have all been inspiring for the designer. The natural vegetation of the land where the hotel is located has created the background for color scale. Industrial touches have been designed as a reflection of boats at the port. Aiming at highlighting the value attributed to service quality from the start of the design using details and materials selection, Selina Kazazoglu has blended her style with two different concepts and aimed at developing a plan of a hotel where guests will never want to leave. Combining beach and coastal touches with various details, the designer has integrated additional points with the industrial symbols of the port. 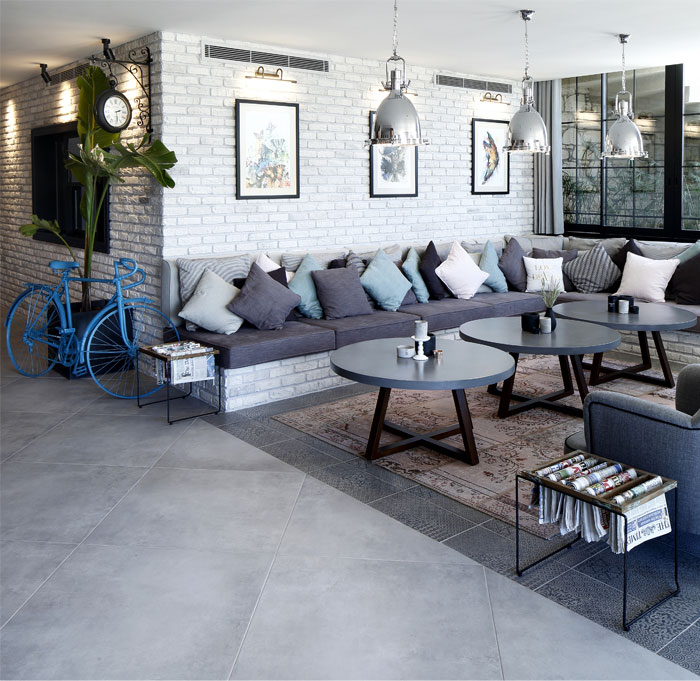 Having a land area of 1.500 m2 and the total construction site of 940 m2, the project consists of 2 deluxe bay window double rooms, two deluxe queen double rooms, ten standard double rooms and four garden view triple rooms. Having four floors together with the Basement Floor, the first and second floors of the building are designed in an L shape. One of the most important points given priority in the project was to create fresh and shaded areas as the guests would like to spend most of their time outside due to hot weather. The outside of the hotel occupying 600 m2, consists of the swimming pool, sunbathing area, yoga area, bar and sitting areas. The reception was built as an independent structure using a plan combining the entrance and lobby. 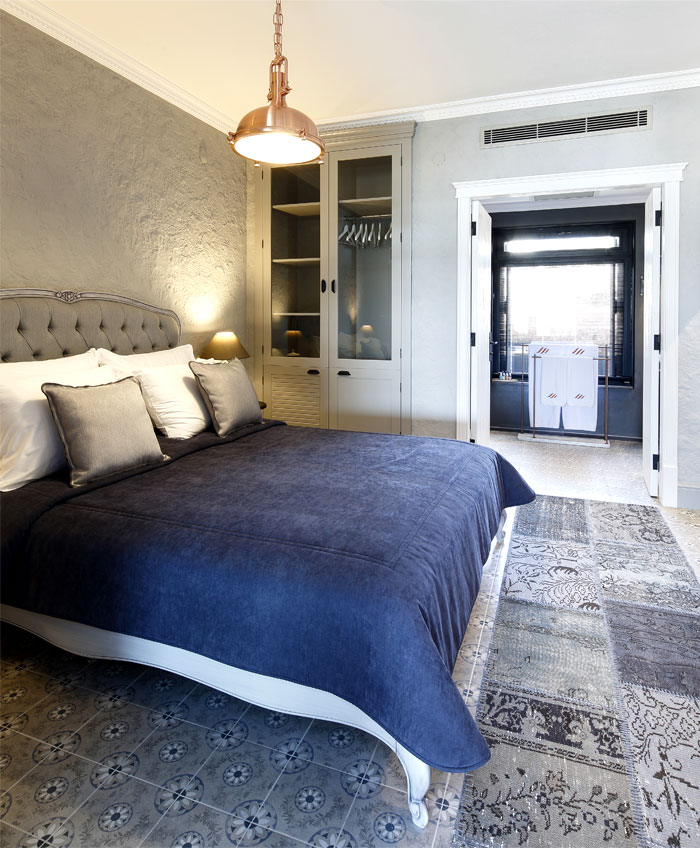 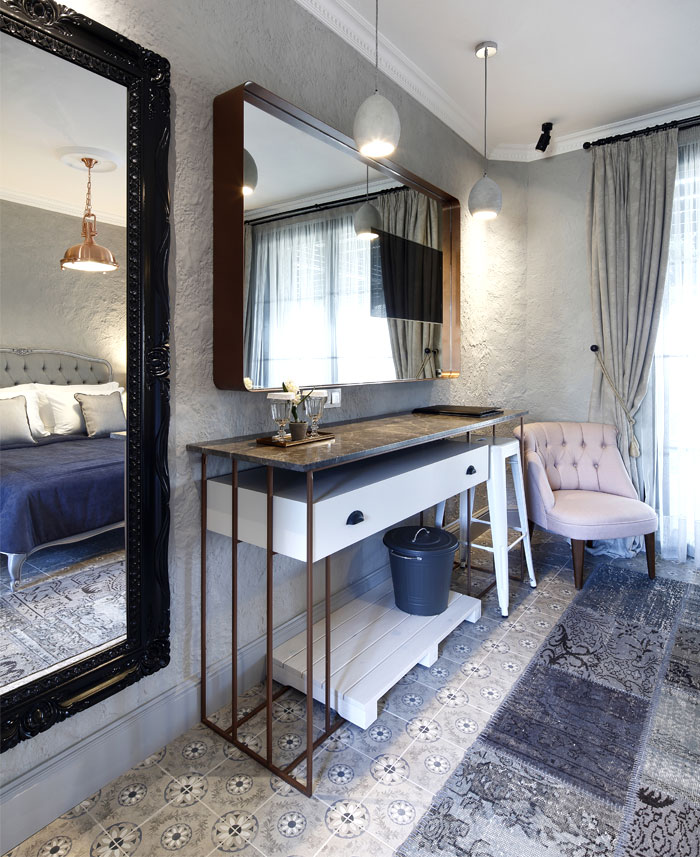 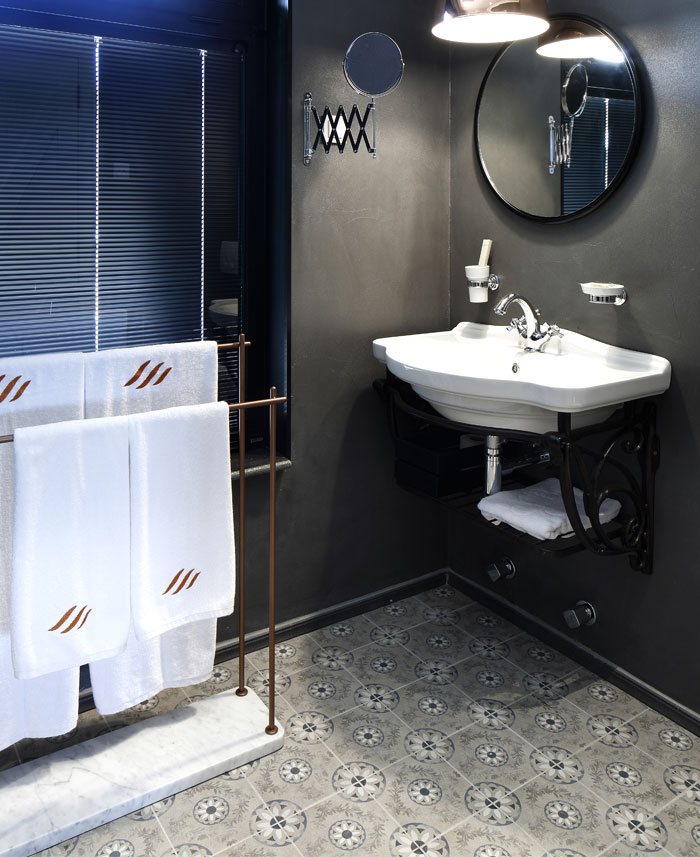 Being close to the windsurfing center has given the designer an inspiration point. Faded colors of the surrounding land come to life with windsurfing sail colors and the restaurant and bar section designed as covered areas are shaded with wicker; the same style is maintained for lighting components. When the sun sets, the pool area has been specially created with the help of suitable lighting effects, to resemble a sandy beach. At the same time, the rocks collected from the surrounding area were arranged in the pool to represent the local landscape. 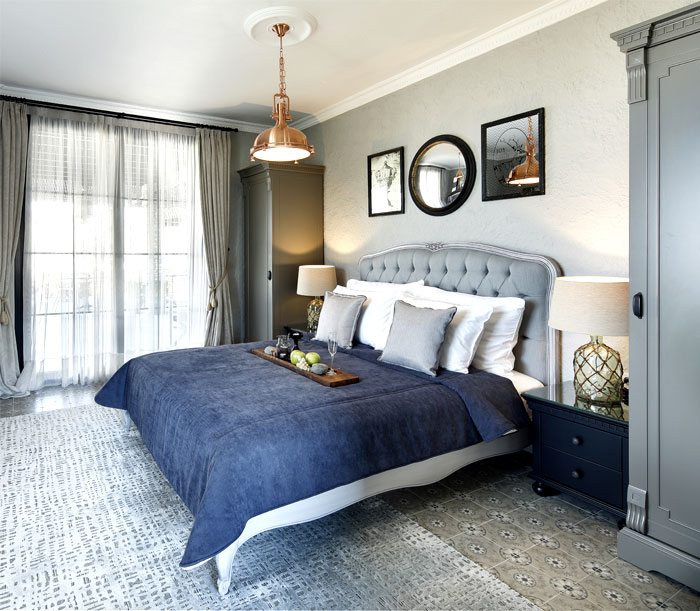 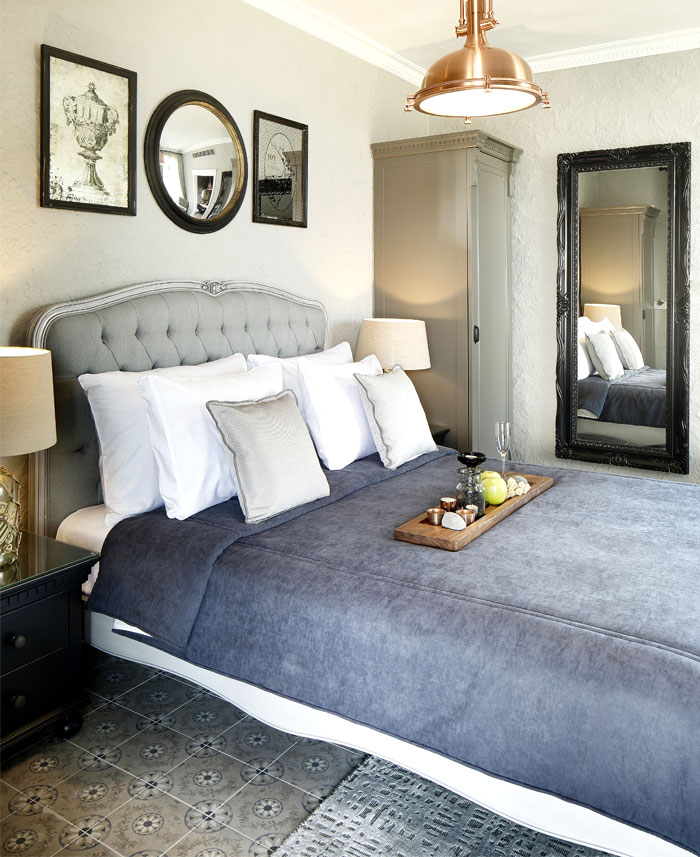 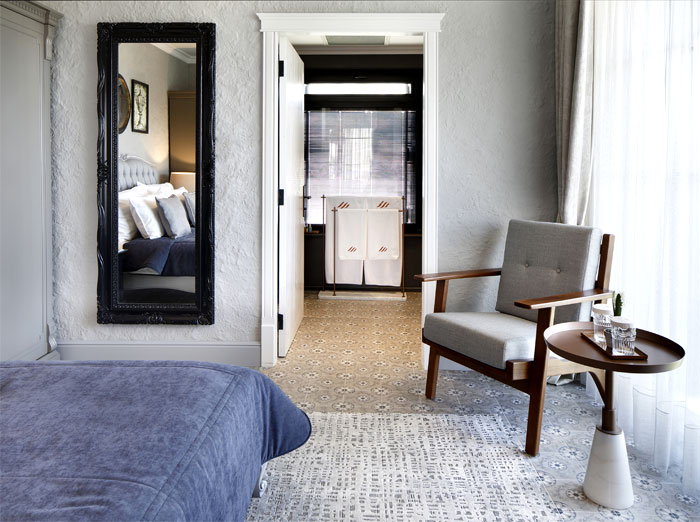 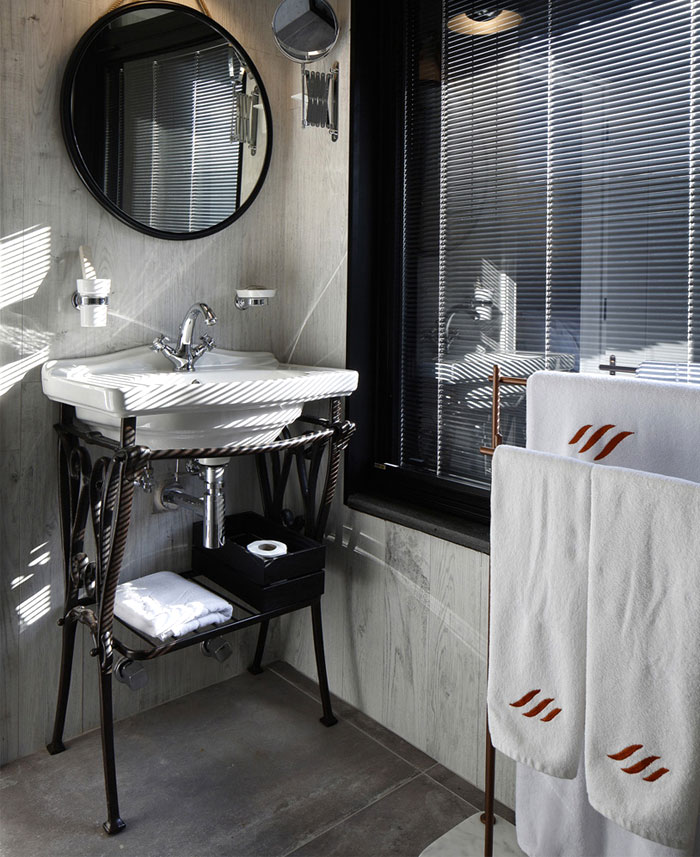 Details are representing the eclectic style which is the other one of the two concepts forming the design act as indicators of the high standards offered by the hotel. Being an inevitable component for the designer, the industrial objects support masculinity and are emphasized in all areas while other softer details, particularly in the rooms, reflect soft and warm aspects of feminine style. While important architectural movements up until the present time are referred to using furniture from the various periods, the materials used on the floors all become work of art brought for an exhibition from their original regions and times. 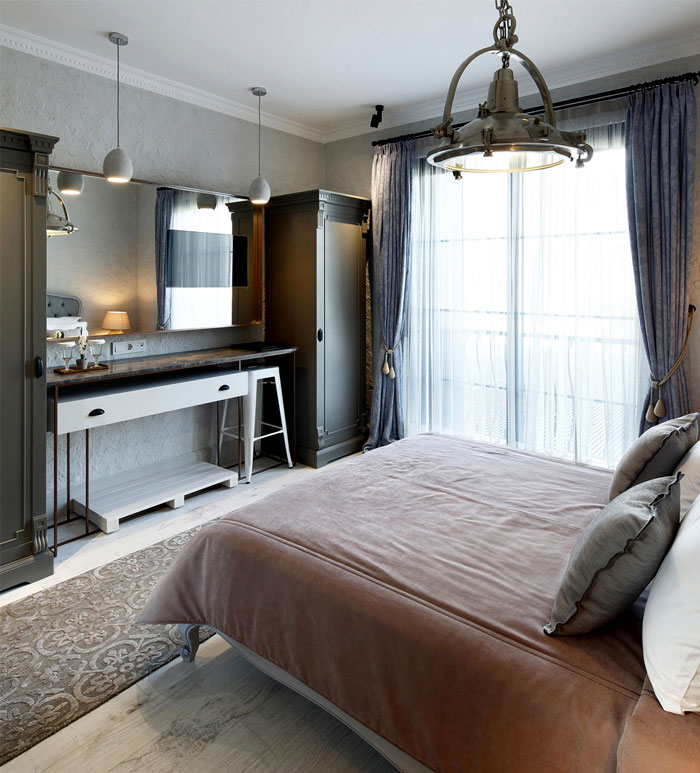 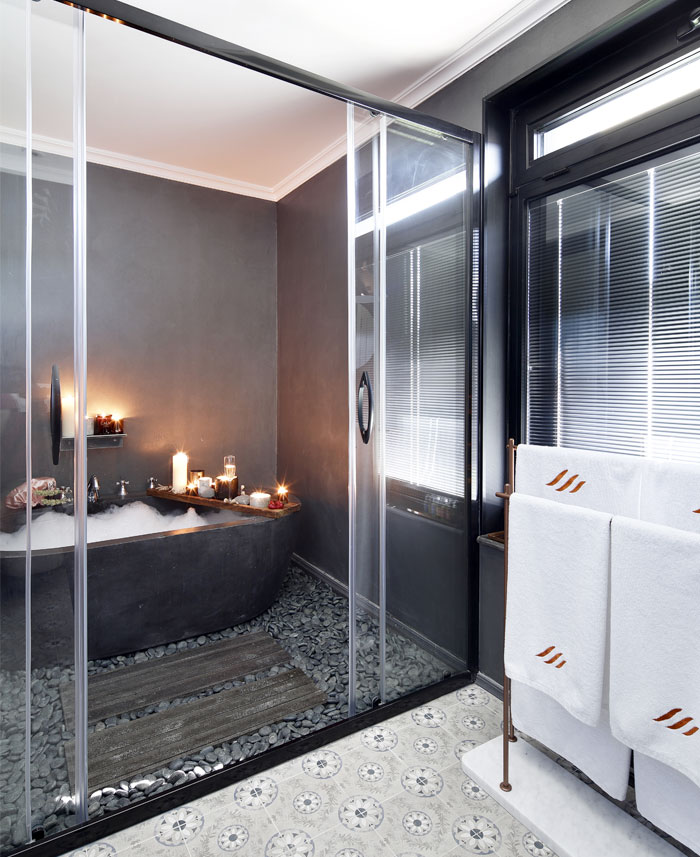