Re-Connection interfaces the different design approaches of the two designers for ALPI materials, with the innovative wood pattern realized for the company by Ettore Sottsass at the beginning of the 1980s and the interpretation of Martino Gamper. 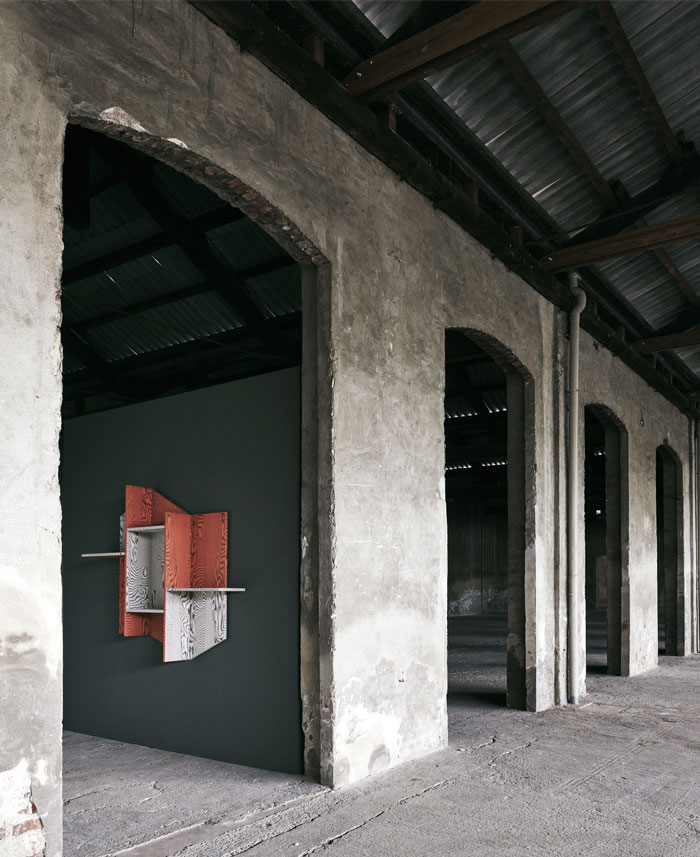 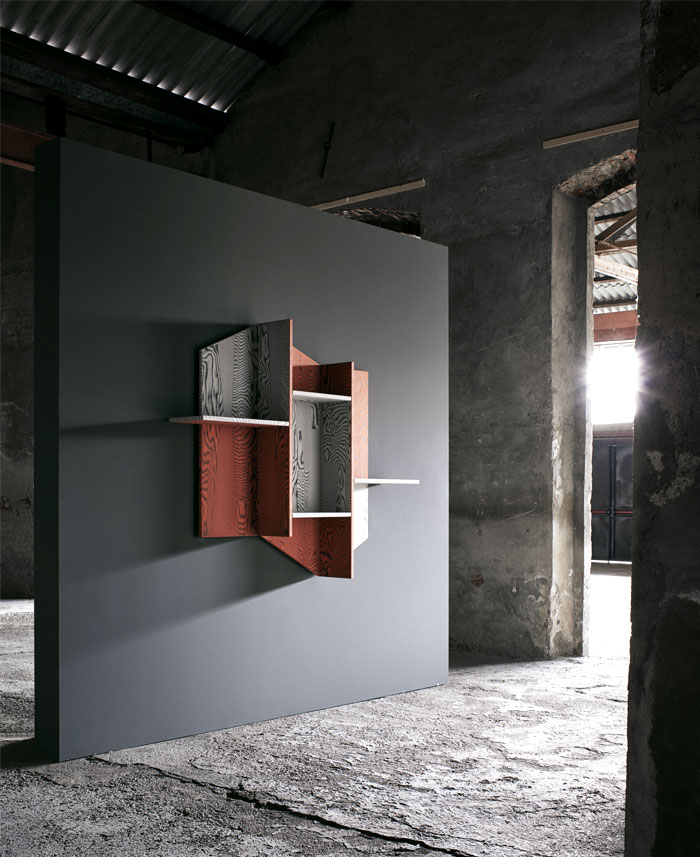 Ettore Sottsass and Martino Gamper are the stars of the exhibition Re-Connection presented by ALPI in their showroom in Via Solferino 7, Milan. One material / 4 colors / 2 stylistic visions. Two stylistic visions that come together in this material to narrate a story of material and creative reconnections: on the one side a new release of the ALPI Sottsass collection that recaptures the design produced by the master in its original colors, on the other a development of this wood surface in pieces of furniture realized exclusively by Martino Gamper. A story that brings to light and celebrates the collaboration between Ettore Sottsass and ALPI born from the same passion for freedom and the pursuit of the aesthetic, and a new meeting with the singularity and contemporaneity of the language of Martino Gamper. 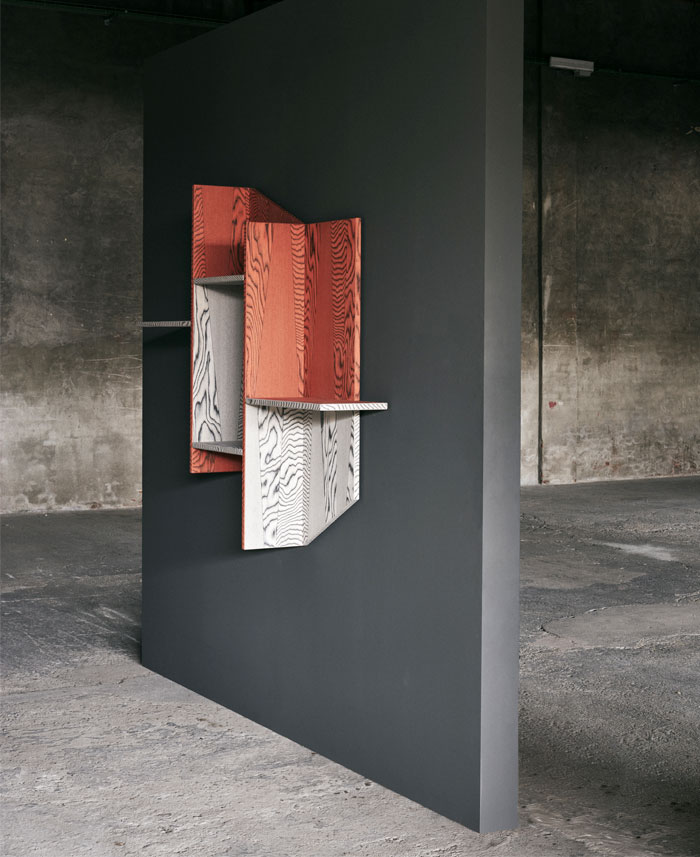 At the beginning of the 1980s, Ettore Sottsass and ALPI began what was to become a profound and close collaboration. The ALPI wood surfaces became an instrument for the master’s artistic design, who redefined and reworked the material through his own extroverted and ductile language and his creative energy. In this way, an innovative pattern was born which Sottsass first used in the 1985 Memphis collection and then for later works. 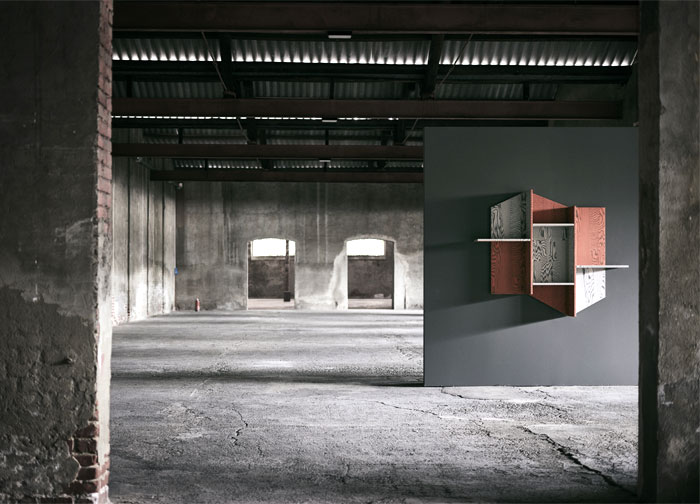 “As soon as I saw Memphis it was a new love at first sight. I went to see Ettore Sottsass, and he asked me if we could make a very unusual wooden floor for him: all in white and pink stripes, just like a shirt. That was the start of a long, joyful relationship.” Vittorio Alpi 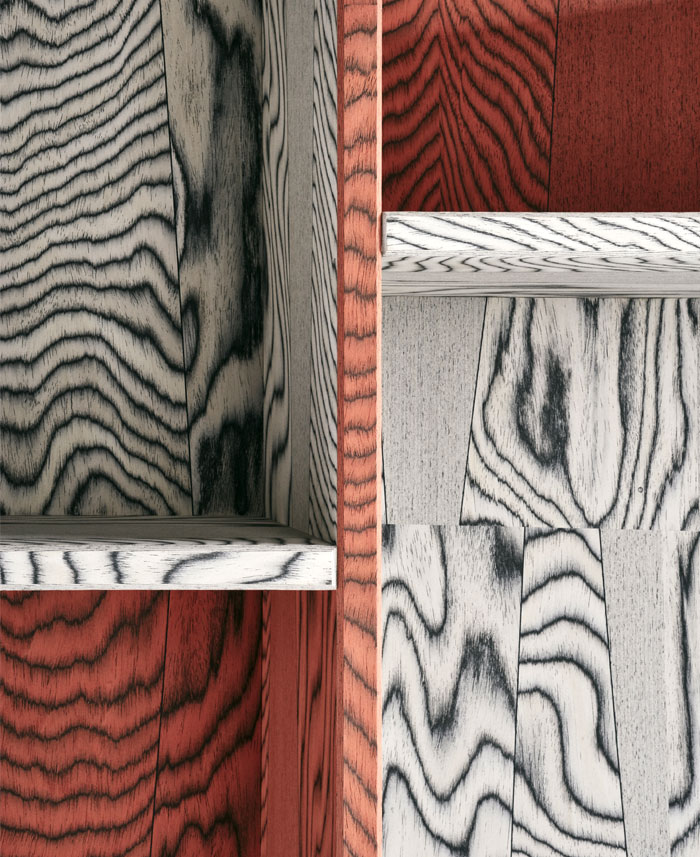 Sottsass’s design, in the four colors of red, orange, brown and grey, now forms part of the extensive range of ALPI woods. These ALPI Sottsass woods recapture the colors of natural woods, accentuating their value and exalting their texture through the distinct markings of the veining, evoking the unusual and irreverent combinations of the language of the master. Light, material, and color come together in the design and thinking of Ettore Sottsass to create dynamic connections between visual art and design, introducing a potentially infinite range of possibilities and a design style that correctly distinguishes this collection realized for ALPI. 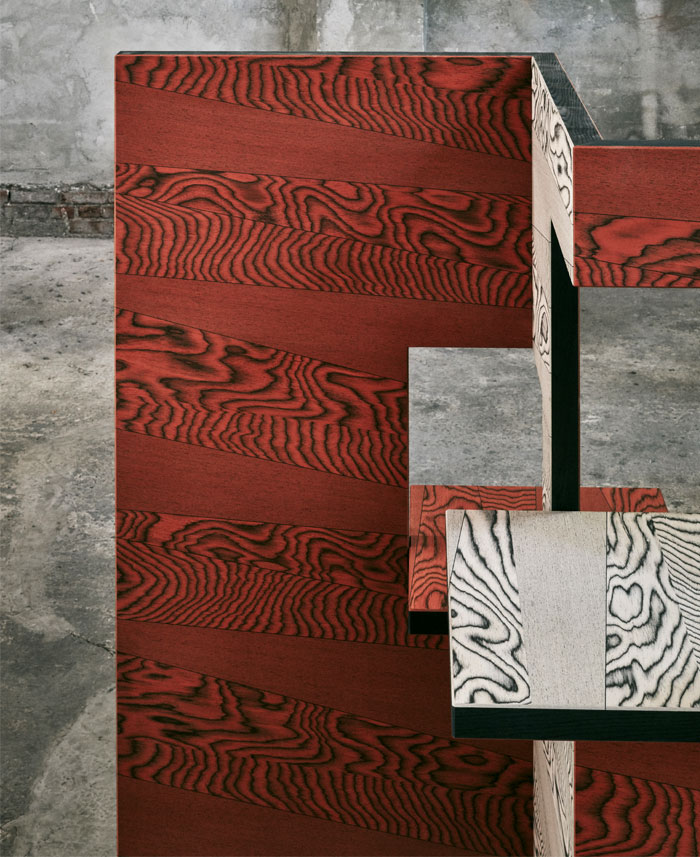 An unfettered experimenter, Martino Gamper offers his interpretation through three exclusive designs of pieces of furniture presented in the exhibition: a cabinet, a hanging library, and a screen. Gamper has reworked the material and reintroduces it in unexpected combinations and juxtapositions, modifying both line and form while maintaining its original identity. 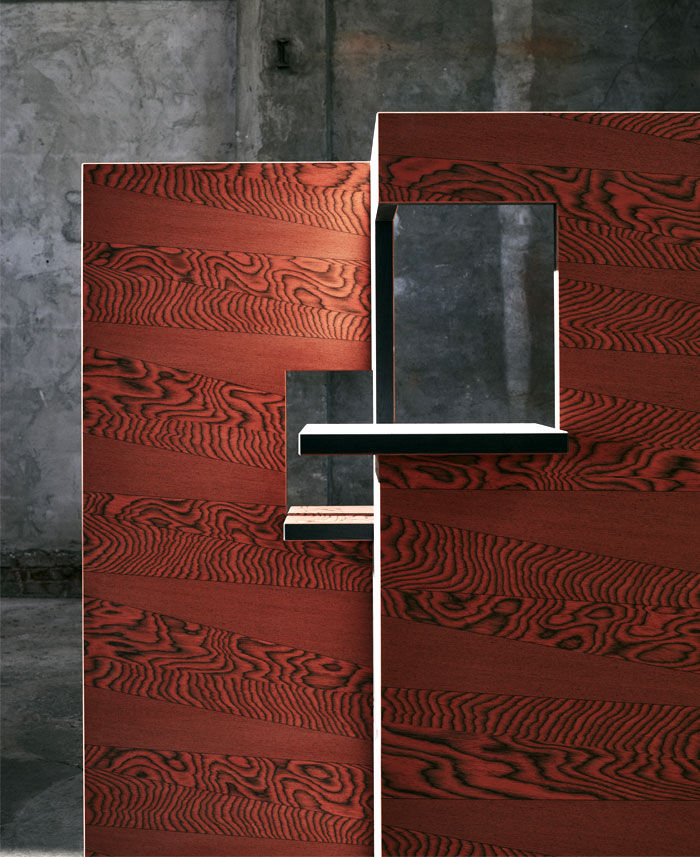 The designer worked directly on the ALPI wood, cutting it at different angles to realize three new veining designs that differ from Sottsass’s original. He subsequently reconnected and reassembled the pieces to create a unique pattern used to realize the works on display. Contrasting geometries and colors typify the creations of Martino Gamper. Lines and colors are employed with mastery to realize unique pieces in which the forms harmonize with the red and grey colors of the wood to achieve a powerful aesthetic impact. 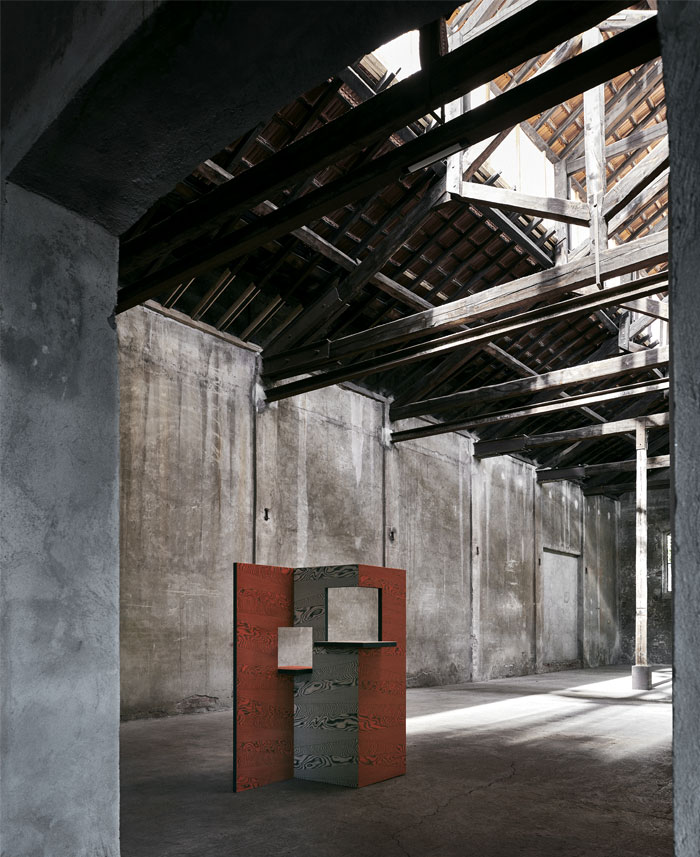 Elegant and original, the cabinet is marked by a clean and minimal design that is rendered unique and authentic by the unique diagonal opening and the use of a seat as the base. The material exuberance of Sottsass’s wood patterning reinterpreted by Gamper is emphasized in the bookcase, which plays on the intersections of straight lines to form irregular sections, and in the singular and sculptural three-leaf screen featuring two openings that lend motion and vitality to work. The ALPI Sottsass wood has in this way become a raw material in the hands of the designer who has employed his creativity to explore its mutability and development. 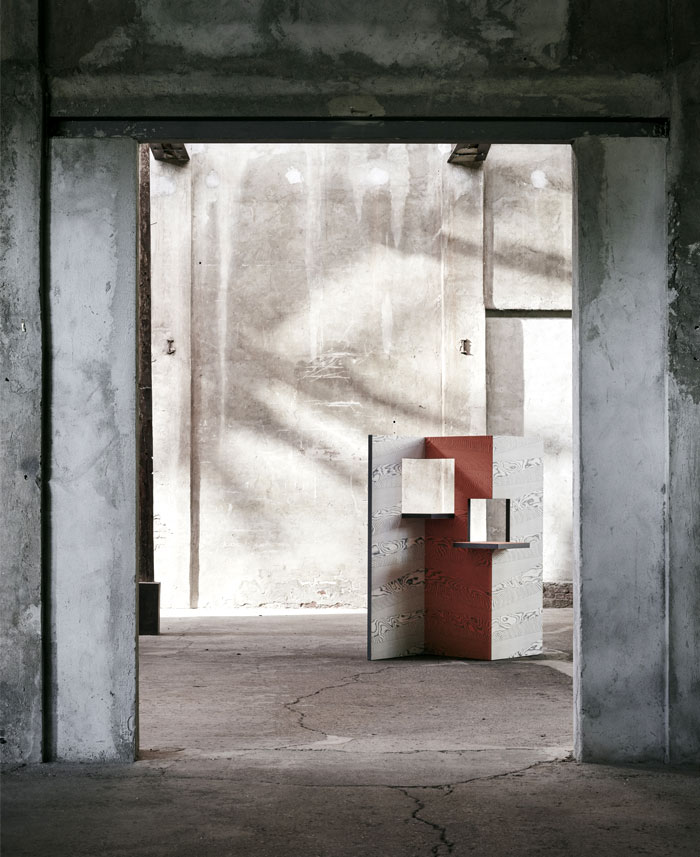 Showroom ALPI Via Solferino 7 Milan
The exhibition will remain open from 5/10 to 30/10.
Monday to Friday from 10am to 1pm and from 2pm to 5pm 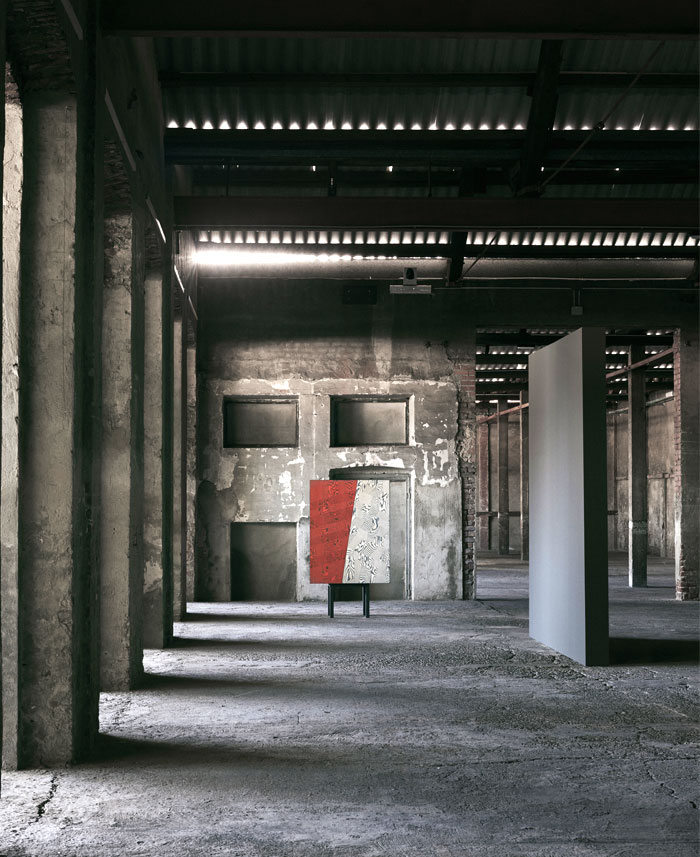 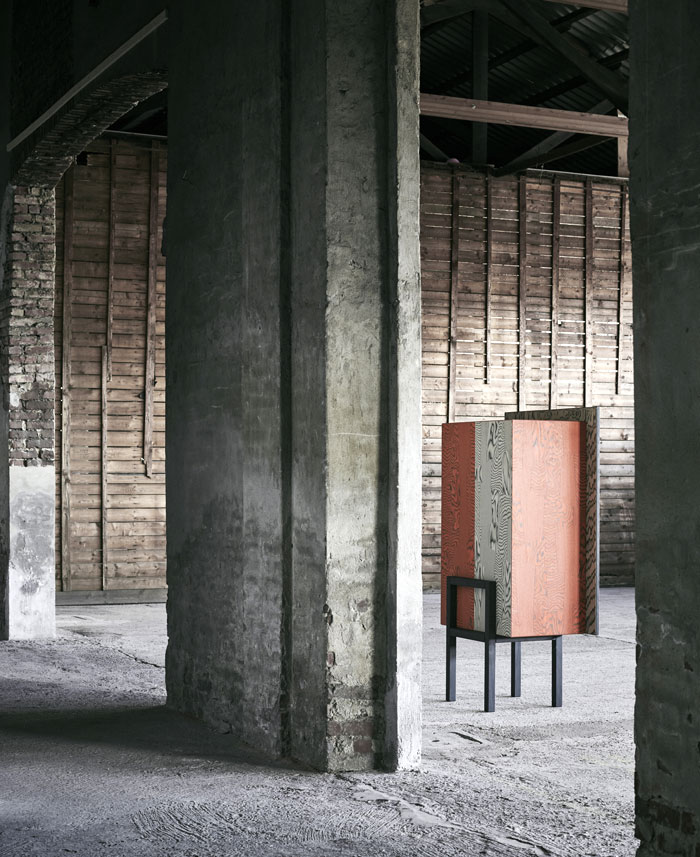 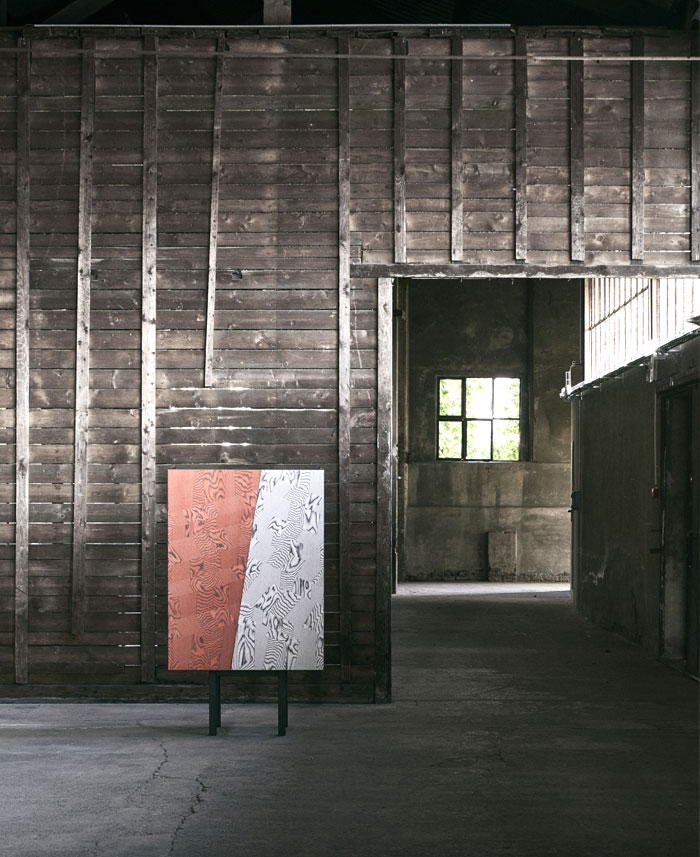 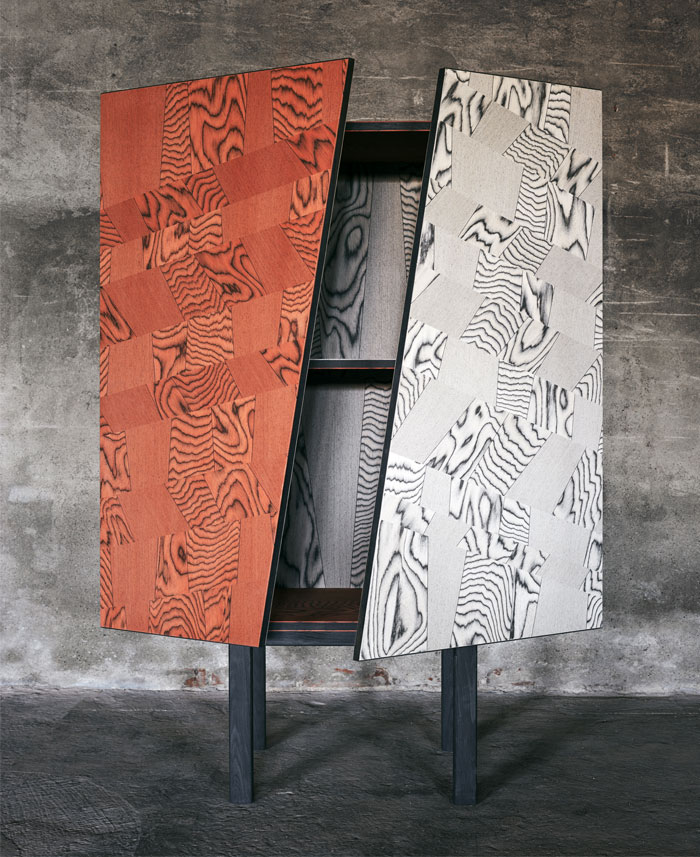