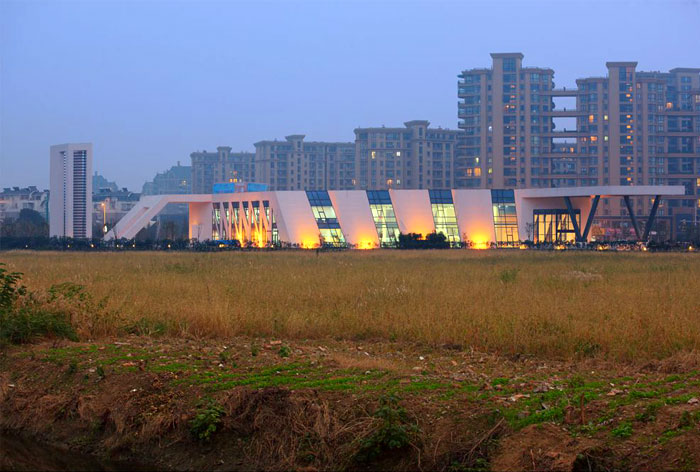 The architect tries to use the way of dynamic expression to emphasize the direction and guidance of the Exhibition Center. At the same time of realizing iconic, the architecture has become a dynamic line of sight guide for the north main building group of the Innovation Park. The volume extends parallel to the main city road, and the commanding height of it tends to the city center, attenuating to the small fluctuations after the large ups and downs, turning northward through the crossroads, becoming a formation of gentle extension. The changing outline creates a strong rhythm, leading the sight into the main building of the Innovation Park. 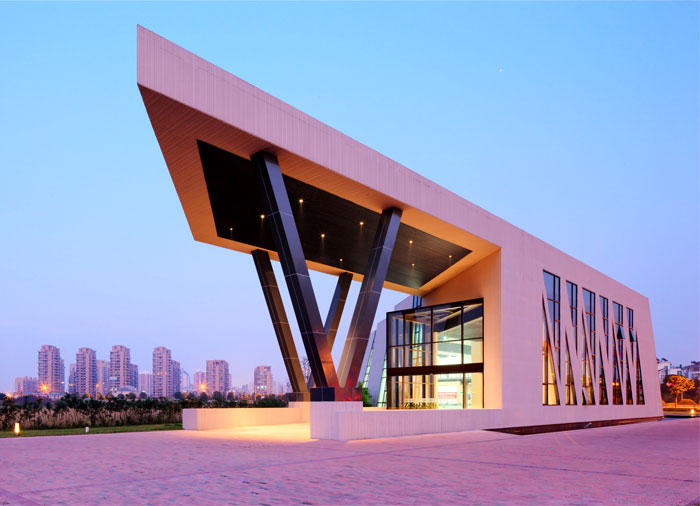 The interior space of the building is composed of a plurality of parallel quadrilateral bodies in series. As the slope of each quadrilateral outer wall gradually increases, the inner space of continuous change is formed, which brings a dynamic experience. The combination of multiple progressive slopes outside the building makes the building more extensible and directional, and the point of view interacts with the skin to form a smooth and continuous visual image. 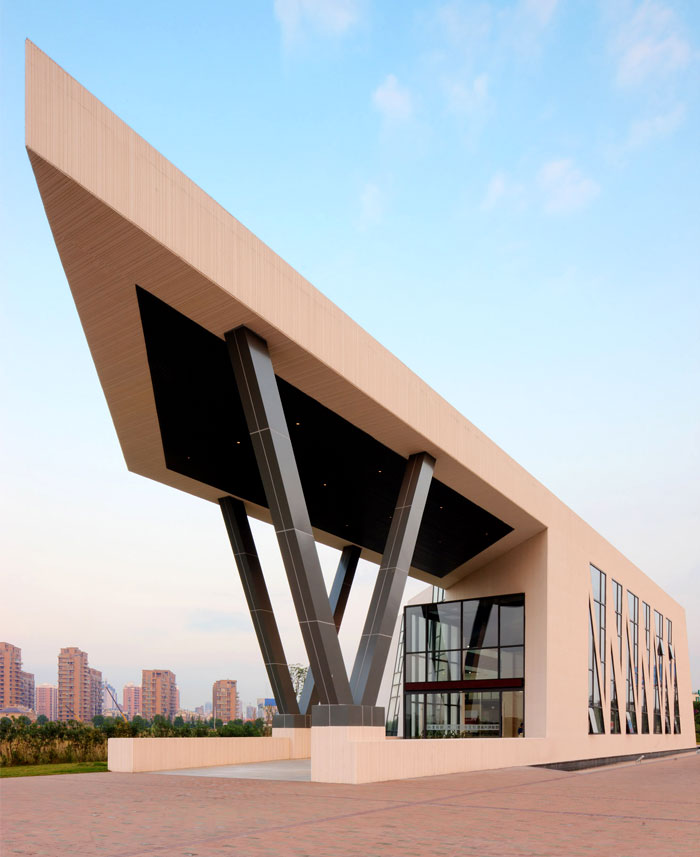 The upper and lower floors of the structure interpenetrate each other, and the open design allows an unobstructed view of the indoor, which extends from the north and south curtain walls to the outdoor, forming a sight corridor. The light is projected into the interior through the roof striped lighting belts, producing an excellent illumination at the same time of creating a strong sense of rhythm. In the staircase, the sunlight through the transparent glass ceiling is rendered, resulting in changes in light and shadow, which enriches the original monotonous traffic space. The exterior decoration materials of the building are mainly made up of cement fiberboard and glass: the glass is smooth and light, and the cement fiberboard is rough and heavy, which forms a contrast. Based on the plasticity of the cement fiberboard, the surface texture of panels is made of different width, and each follows the inclined angle of the outer wall, which makes its more tight stripes closely conform to the changes of the building volume, strengthening the dynamic effect. 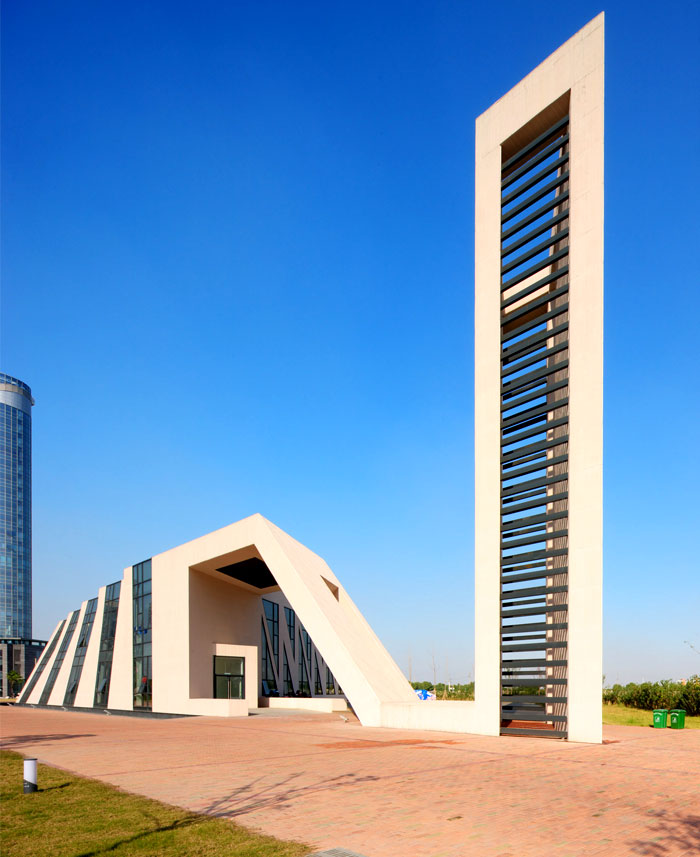 The glass facade frames in the form of dislocation in the north and south walls, while in the form of polyline in the east and west walls; the “V” type structural column serves as cantilever support of the main entrance, and these details are undoubted to help the building “jump” in the vision of people. “I hope to show more rhythms in the building of the solidified music,” said Dou Zhi, the architect. Jiaxing Innovation Park Exhibition Center is different from the general form of the building, more like a sculpture in the environment. “Continuous polygonal line” is the most used design technique, which sketches out an undulating shape, continuous space, extending sight, shifting light and shadow, changing details, bringing a string of feelings of novelty, fashion, avant-garde, and constant visual surprises. 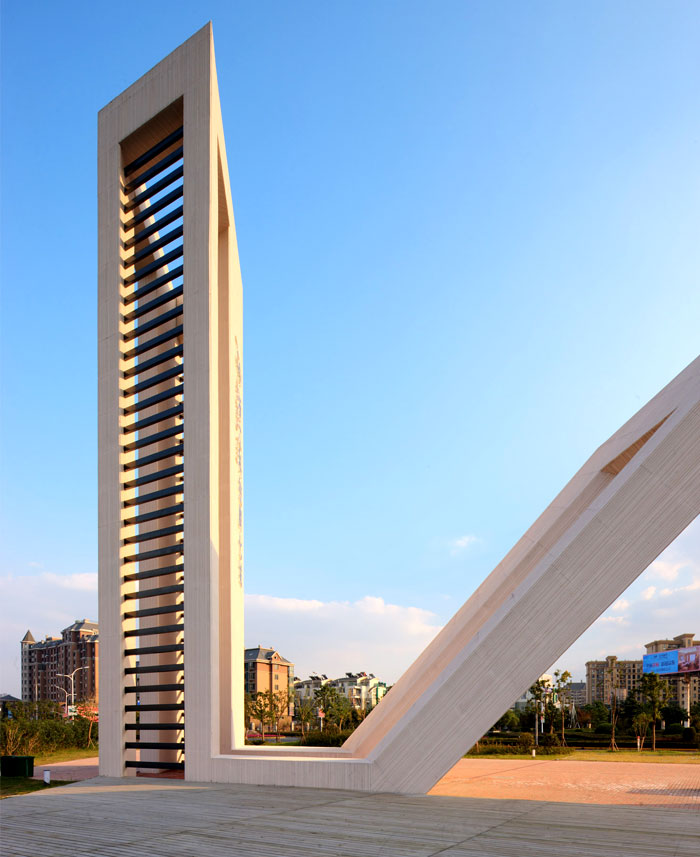 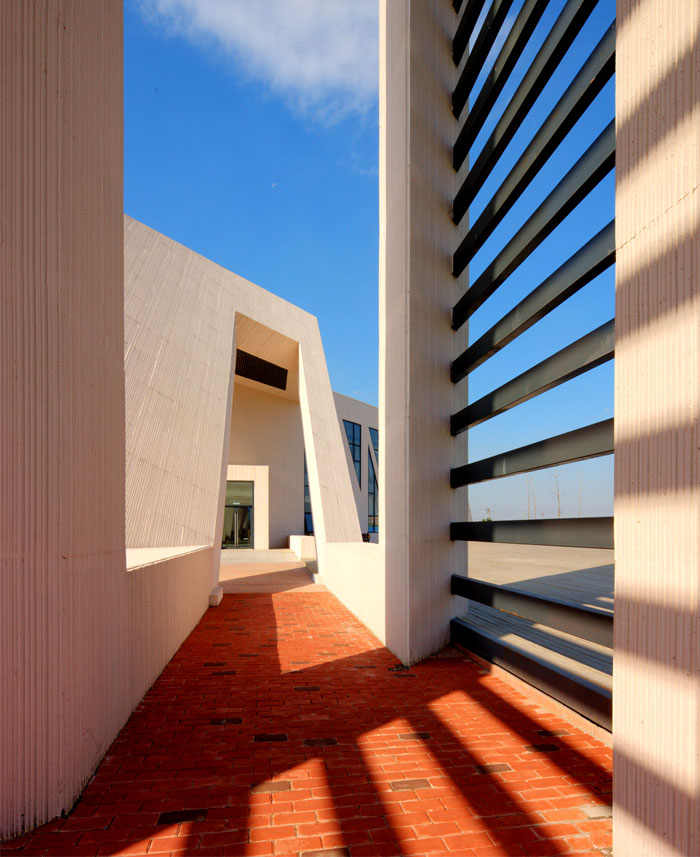 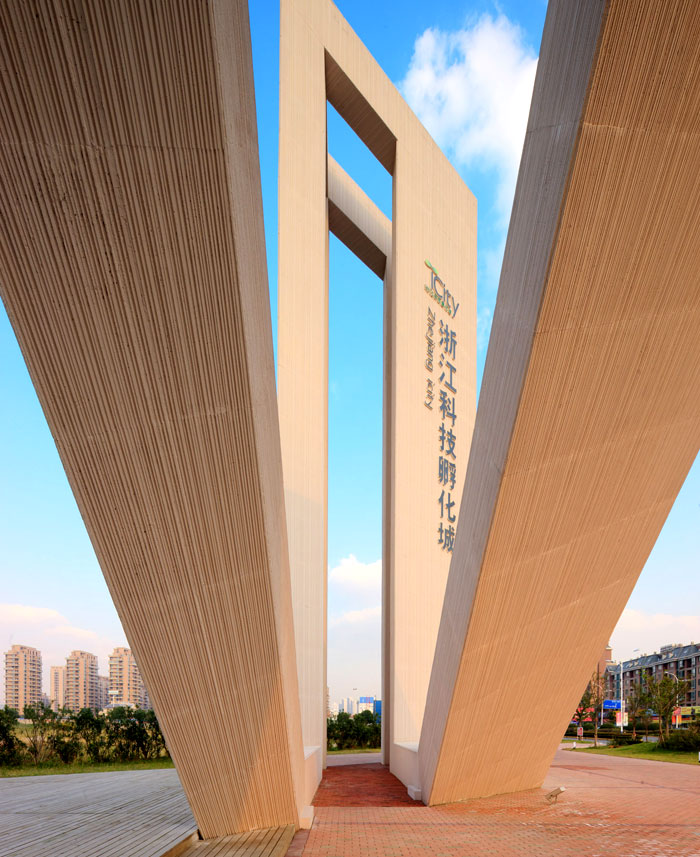 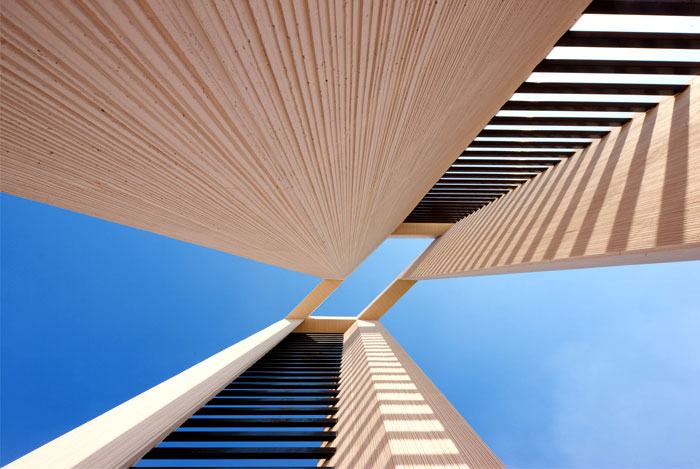 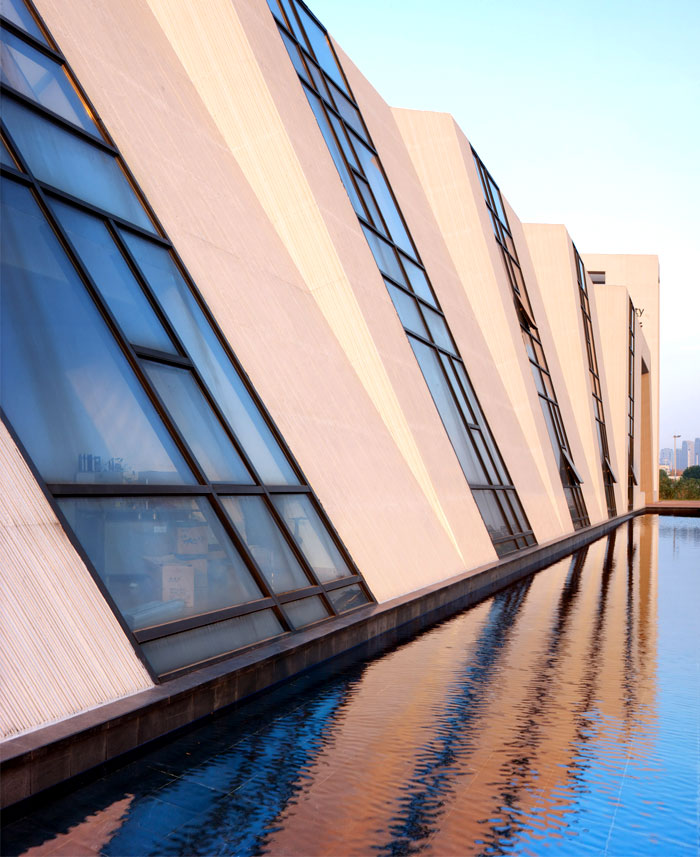 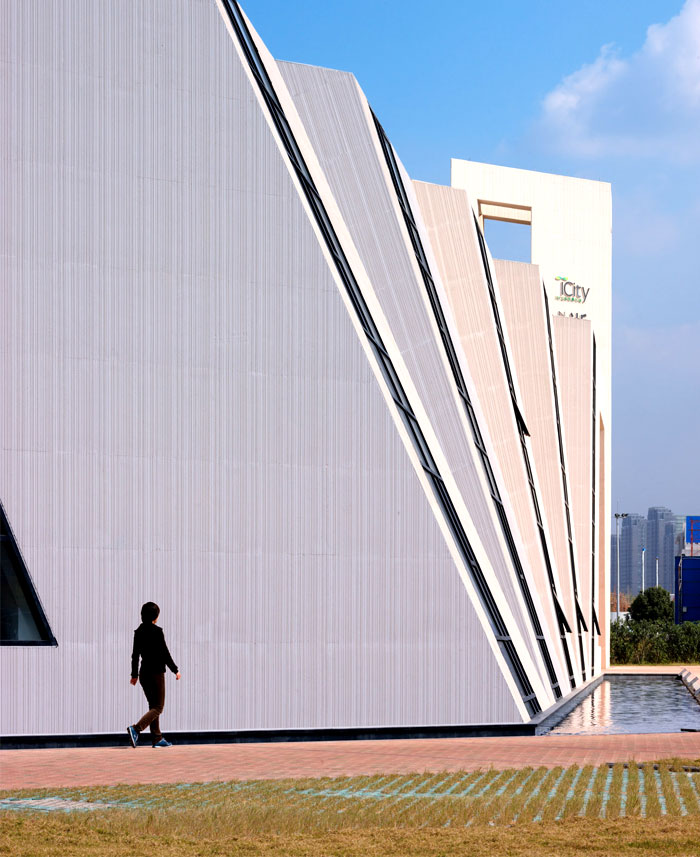 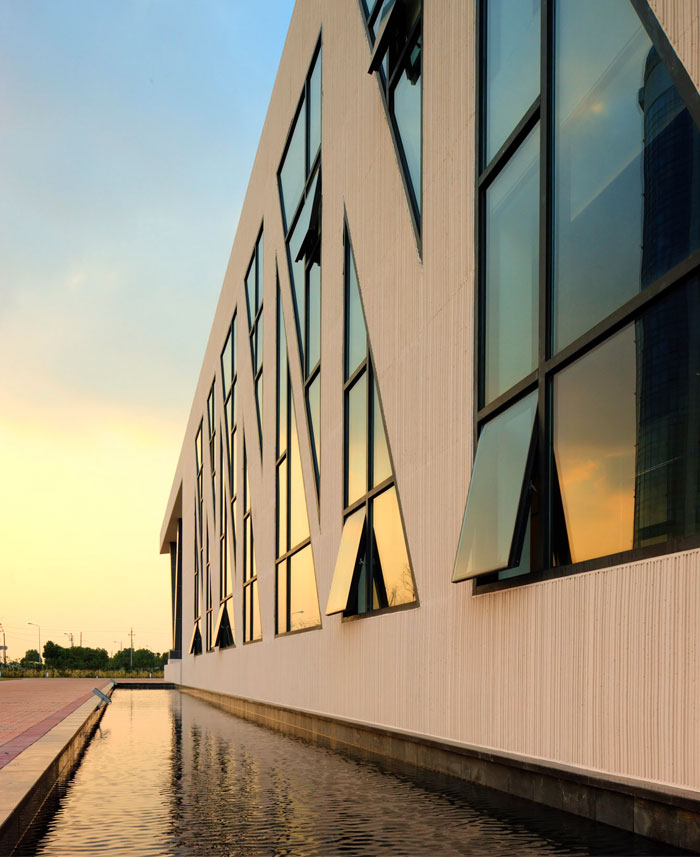