This is a project of reconstruction of an old hotel – Sosna, in Tatranska Strba in Slovakia by Tomas Belica – Tolicci design studio. The client´s goal was to design a contemporary interior with modern furnishing features in contrast with the raw features of the nature to highlight the natural elements of Slovakia. 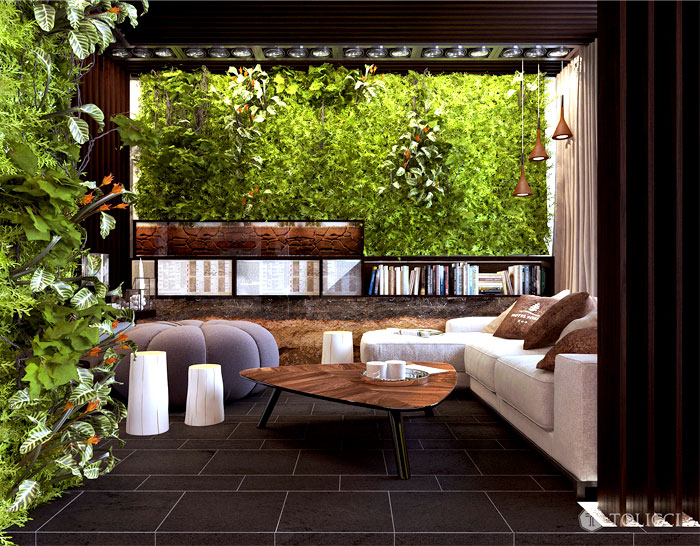 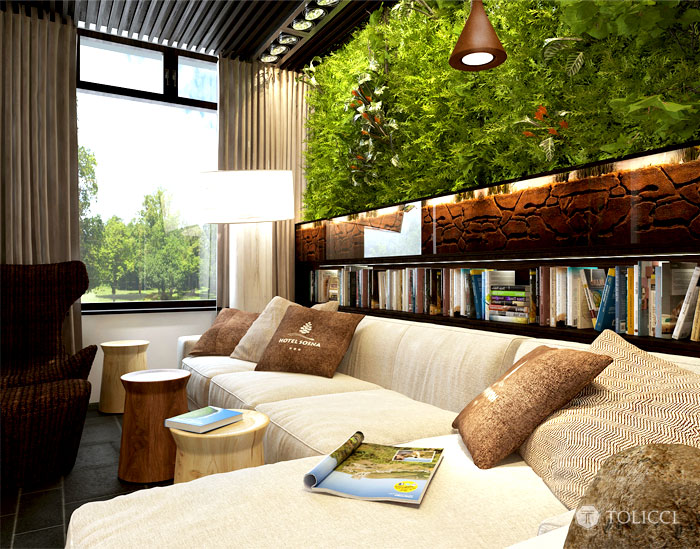 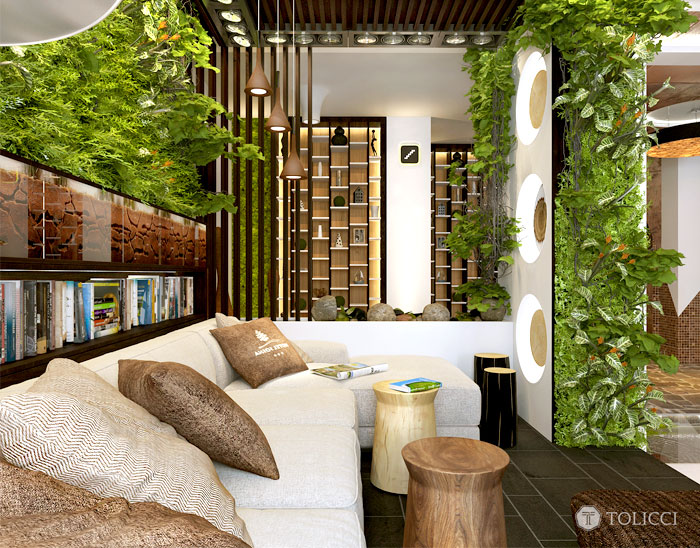 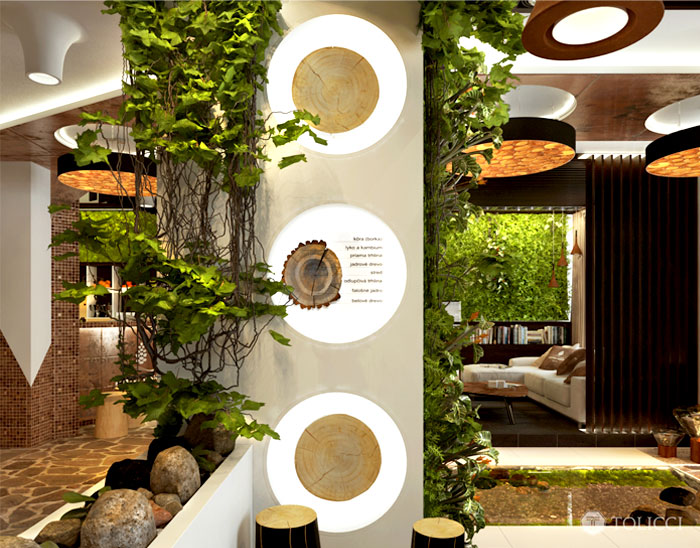 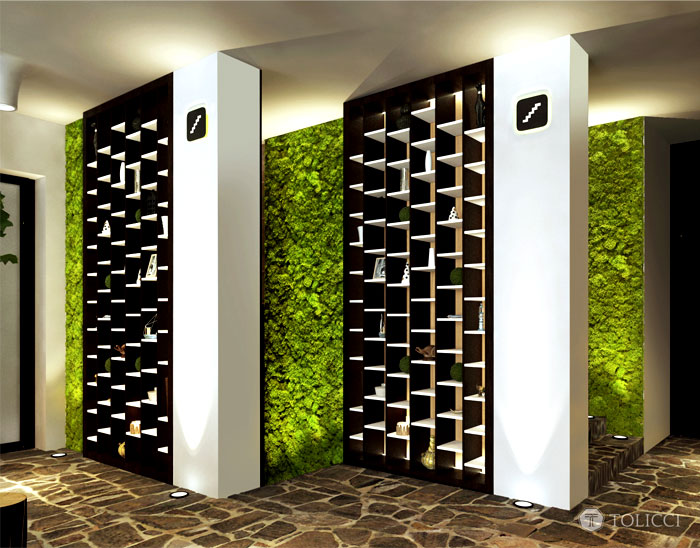 The current design reflects the simplicity of the interior layout. At the entrance were used natural moss claddings from lichen. The composition is completed by raw, lit pine trunks along with planting of ferns so that the visitor knows that he found himself in a nature-themed hotel, which was one of the goals of our client. After entering the hotel, a glazed floor appears before you, with water flowing underneath, which flows down from support columns. It is an unusual element in the interior but reflects the richness of natural resources in Slovakia. 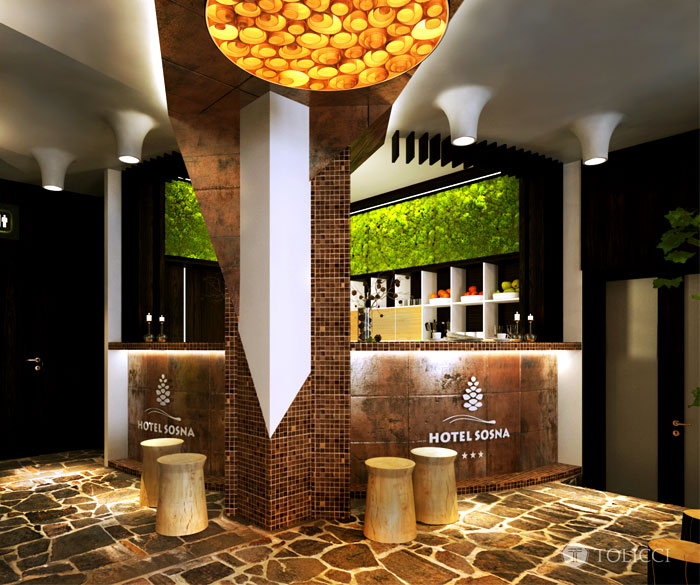 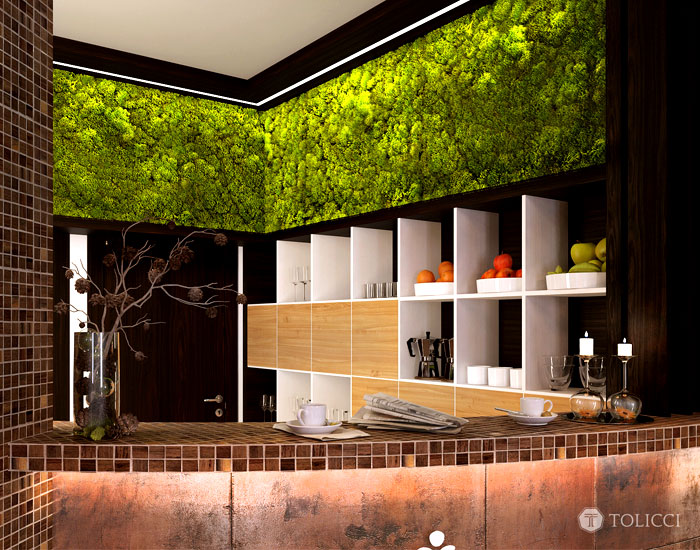 The perspective of entrance and movement of guests is supported by lowered strip of the lowered ceiling, from which hang designer lighting, from a famous Spanish brand, made from natural veneer. On the sides of the support, columns are placed vertically living walls. On the both sides of the entrance are berths with seating where you can read interesting books about Slovakia as a country and the Slovak countryside. The berth is complemented by other vertical living walls under which is located the Formicarium as another interesting feature of nature. We used the same designer lamps as at the entrance, which are also made from natural veneer. The reception area is formed by the combination of moss wall with wooden mosaic on the ceiling, complemented by designer features from leading Italian brand. They support the natural and organic style of this design. 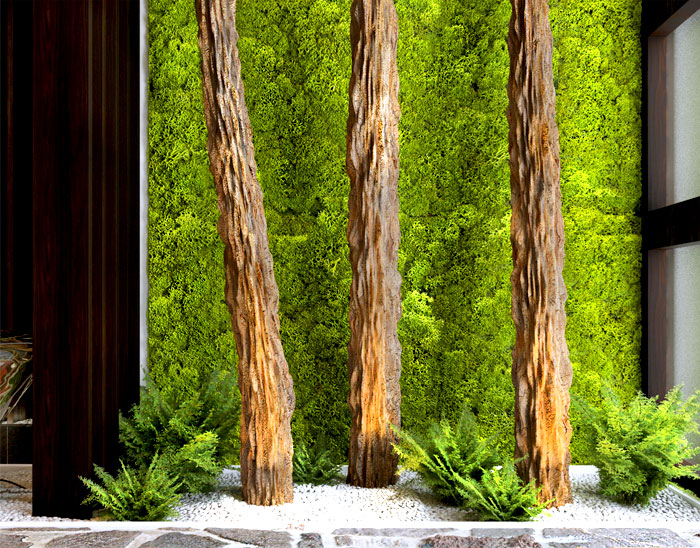 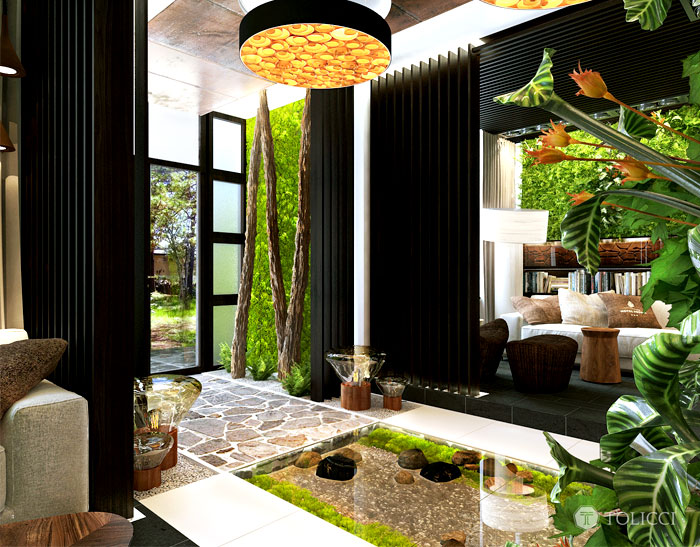 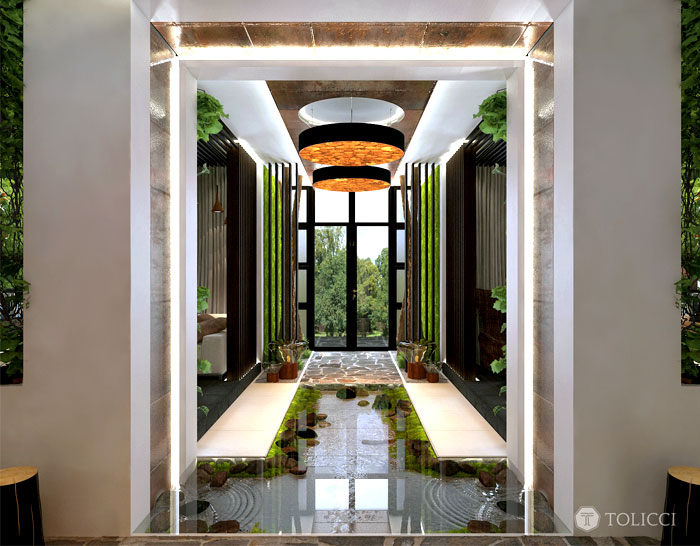 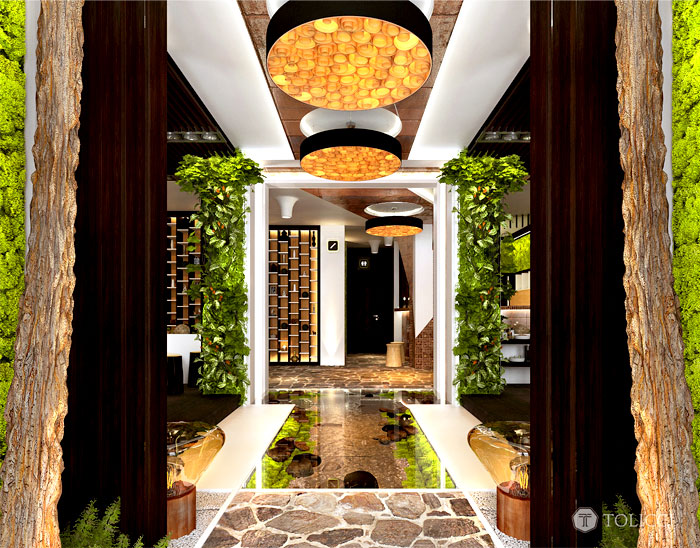 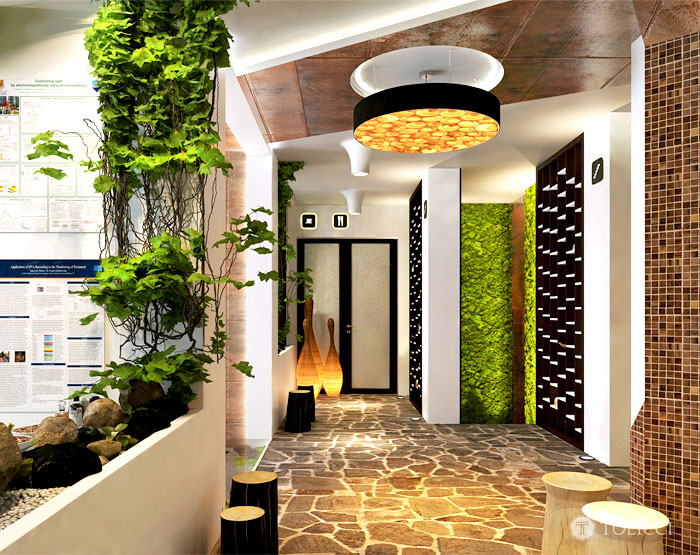 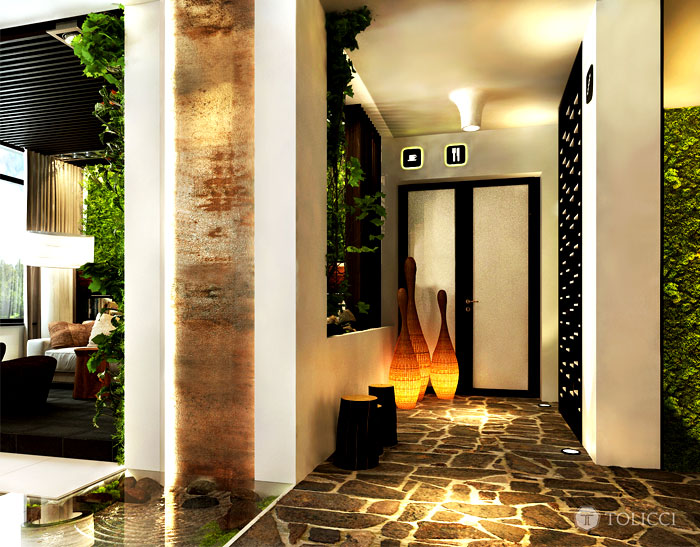 The client´s vision was to create a nature themed room. We have chosen the theme of the forest. The suite is divided into two parts: The first part is a relaxing-sleeping area and the second part is a relaxing-working-educational part with refreshment. In the relaxing sleeping area, we chose as a central feature a tailor-made bed on an illuminated pedestal. The specially designed and printed fabric, located behind the bed, is evenly backlit which creates the impression that you are in the forest. This feature continues on the floor and the opposite wall. Natural feeling is enhanced by the mirror anchored to the ceiling, which reflects the image of infinity and the guest has the feeling that there is no ceiling. As bedside tables, we chose stone slate on which are placed special table lamps from a well-known brand from Czech Republic. The TV is located on the opposite wall. In the working-educational part, we placed a comfortable sofa with a coffee table and designer organic lamp from a leading French brand. Under the window, we placed a library with interesting literature to study. Part of this section is also a work desk and a minibar along with the Italian designer lamp. The round mirror with round moss features completes the designed space. 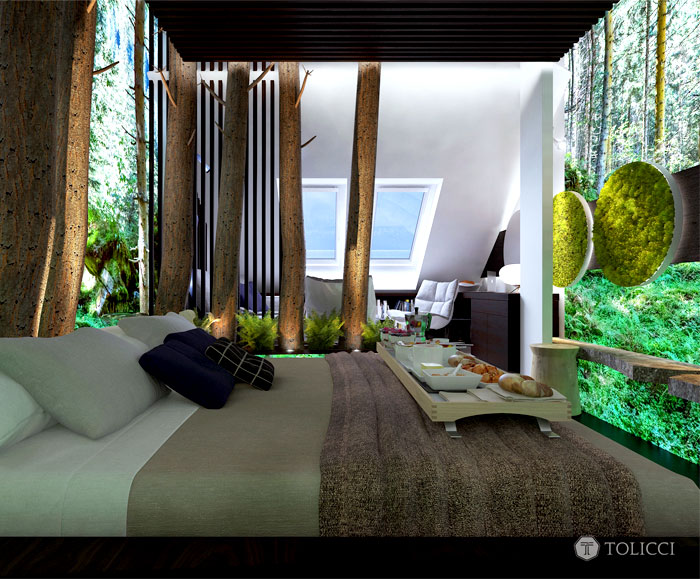 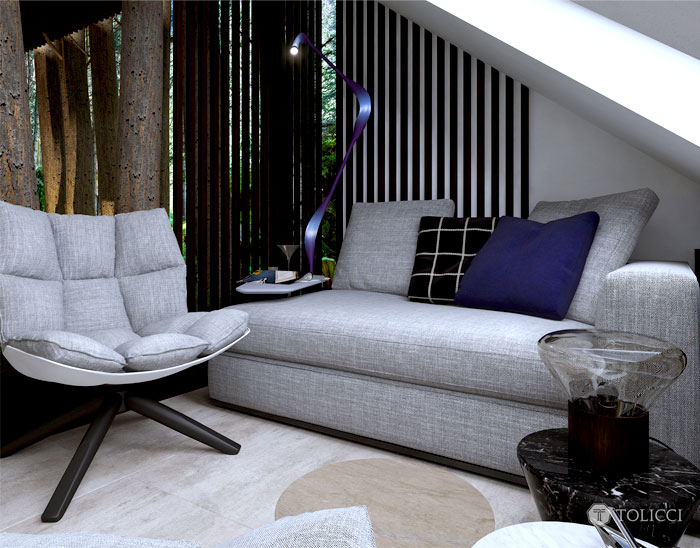 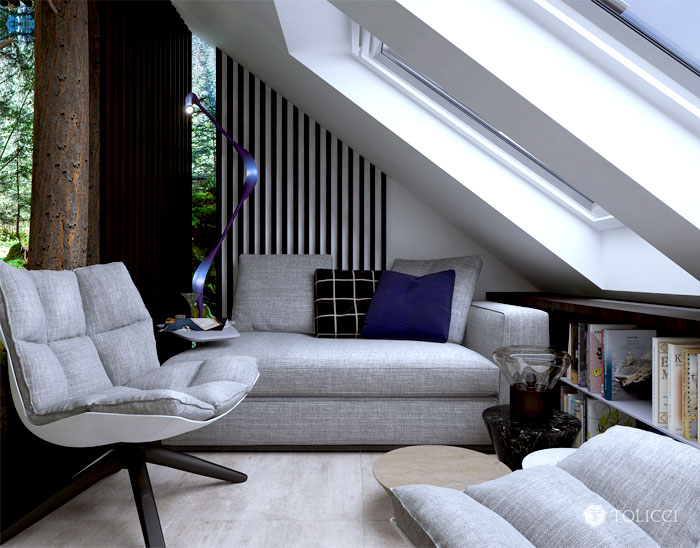 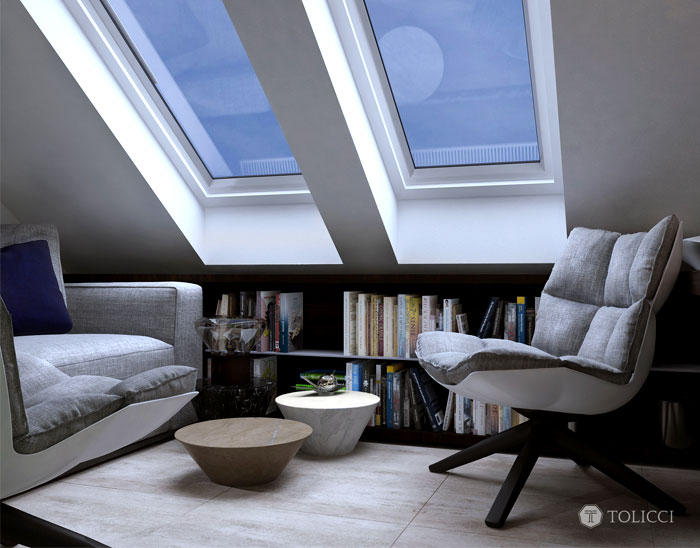 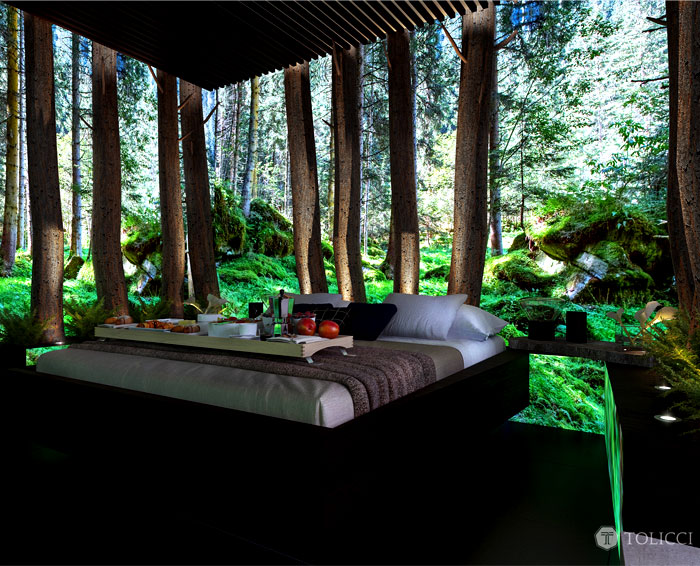 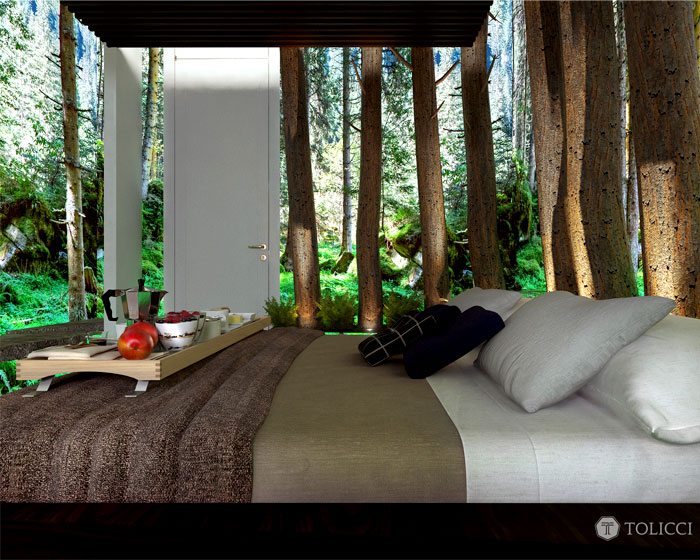 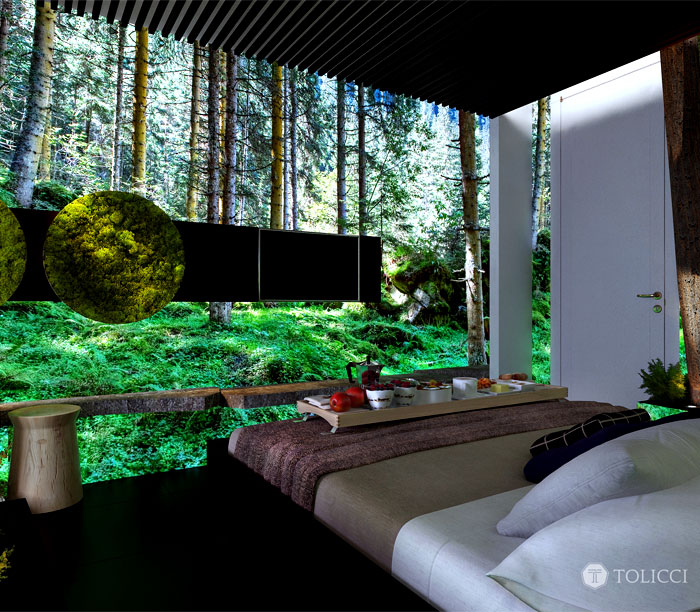 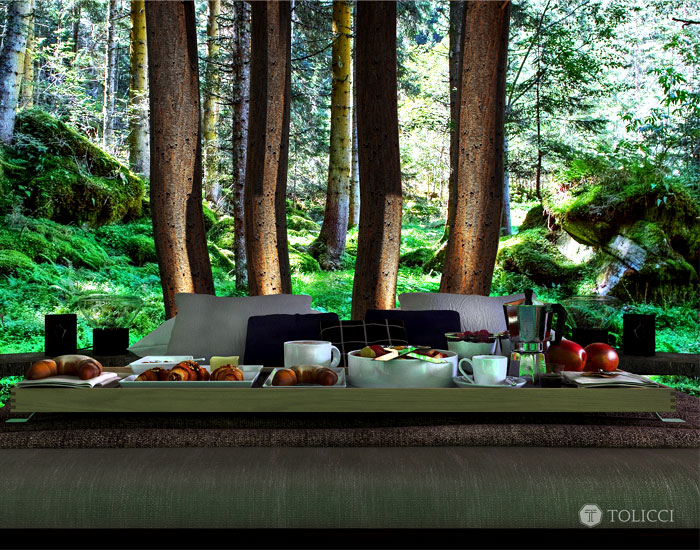 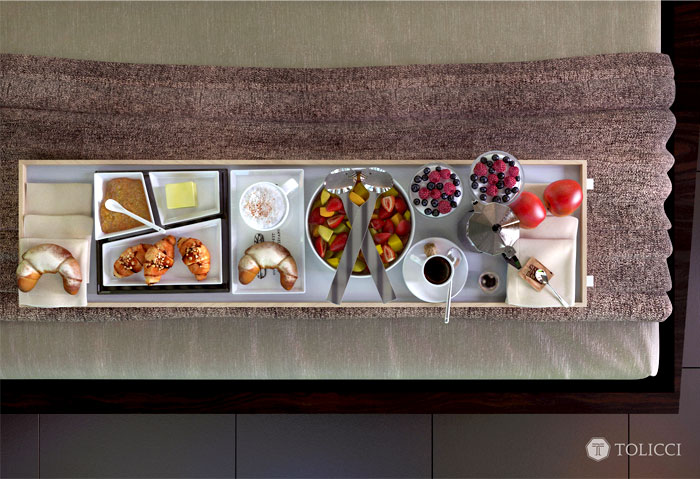 It was an interesting project in which we combined the client’s requirements with natural features completed with the current trends and icons in the field of design. Our goal was to create a unique hotel in which, we think, we succeeded. 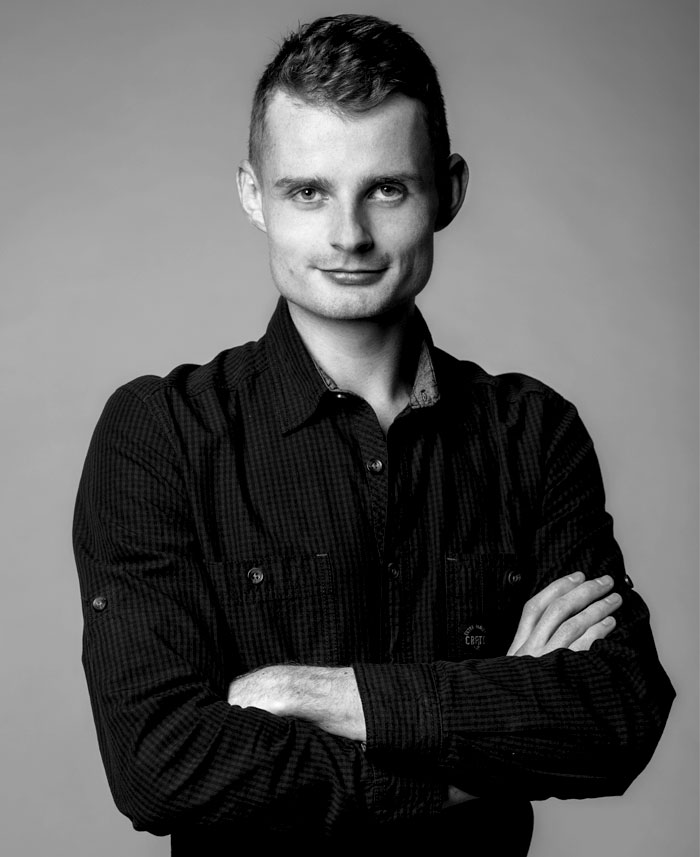