Studio Tolicci have designed unique living room and hallway in luxurious countryside residence in Slovakia. Before they represented a few of the living areas – kitchen, dining and bathroom, now they surprise us with a unique living room, furnished with style. 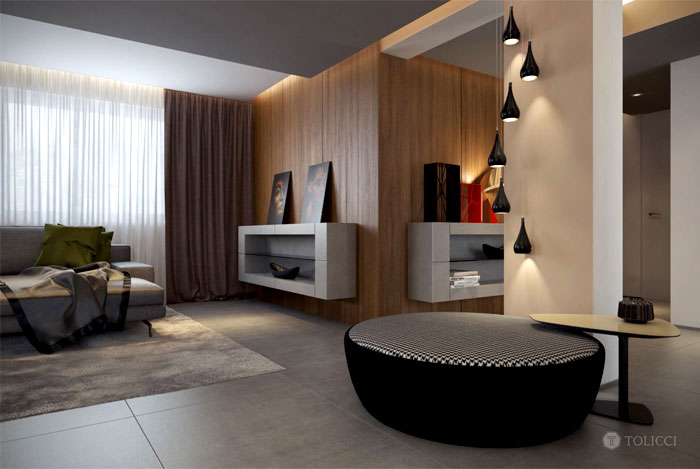 Hallway
With the design of the hallway, we wanted to break some customary and traditional attitudes. We focused, therefore, on connecting the corridor with the living room; with both rooms sharing a similar design.

On the walls opposite the entrance is placed wooden paneling, which we completed with hanging console in concrete finish. It became a sort of a connecting feature because we used the same console in the design of the living room. Golden lamp adds to the space a bit of uniqueness.

The unusual concept of the corridor begins at the very entrance of the house. In the hallway, there are two steps that we naturally wanted to get involved in the draft. We were able to achieve that by designing an atypical shoe cabinet, which, in addition to storage space, becomes a place to sit. We added a soft gray seat to it. To create an atmosphere of comfort, we decided to place cushions on the shoe cabinet to distinguish it from the other traditional shoe cabinets. We decided to support the elongated shape of the hallway also on the ceiling, where we put the liner lighting in the soffit. 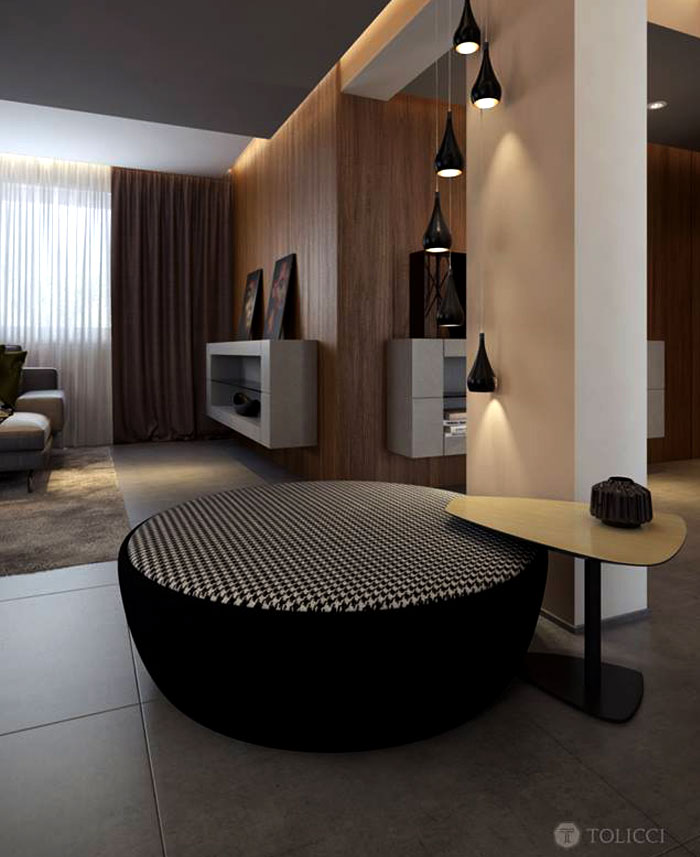 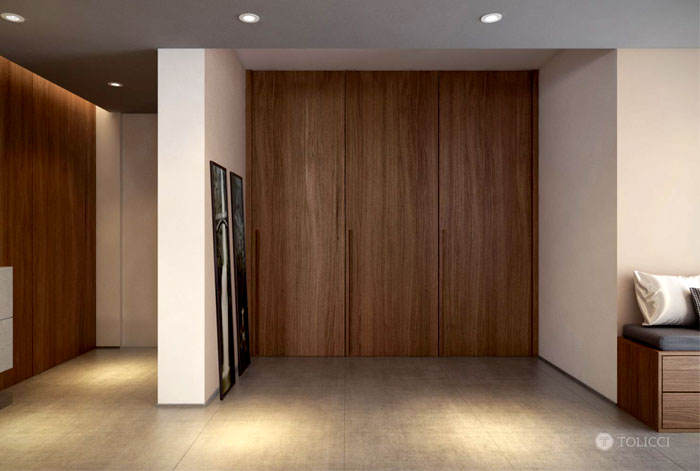 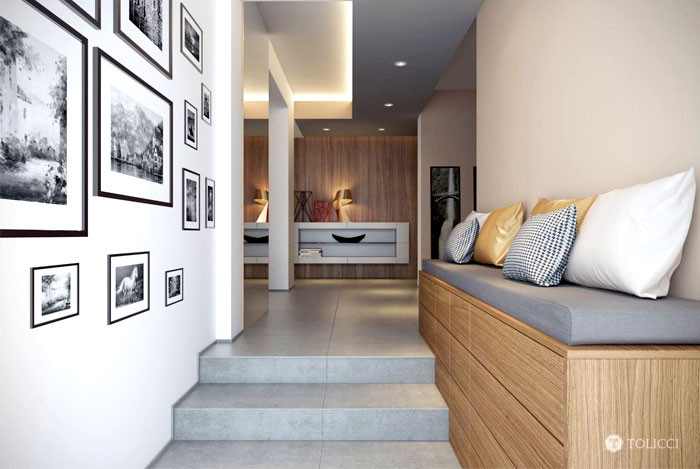 The space is suitably complemented by mirror that stretches from floor to ceiling. In the continuity to other gold elements of our design, we have highlighted the mirror with vertical golden strip, which extend on both sides. The disposition of the area allowed us to create an unconventional storage space in the hollow space behind the mirror. With its inconspicuous design, it gives us the ability to hide all the things that don´t have to be visible at first sight. The existing black-and-white photos in frames become part of the design. They have found their place on the wall at the entrance.

The passage to the technical room is solved with an interesting method. In this case, we hid the entrance into the built-in wardrobe. After moving the right wing of the closet, we can go through it into the next room. This sophisticated solution enabled us to maintain uniformity, without interference by conventional doors. 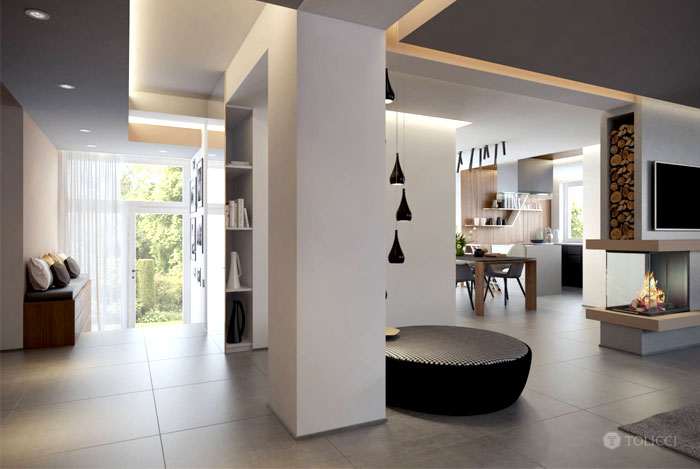 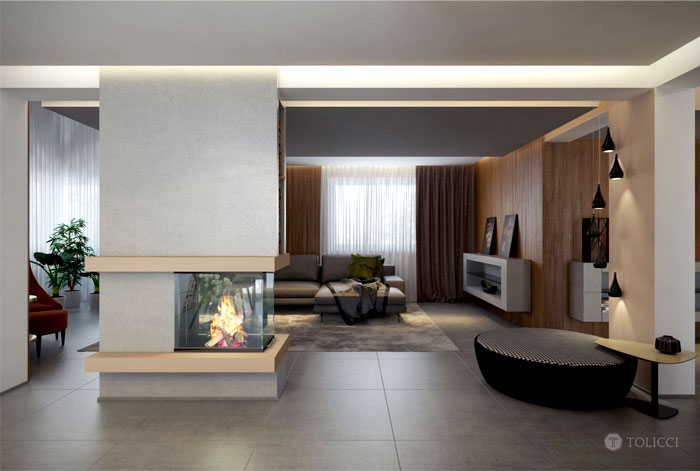 Living room
As we mentioned above, the design of the living room smoothly follows the design of the hallway. As we can see, the space is open and offers us beautiful vistas from one part to another. The living room has become the jewel of the house, and we tried very sensitively to tuned the colors and materials so it doesn´t look very congested. 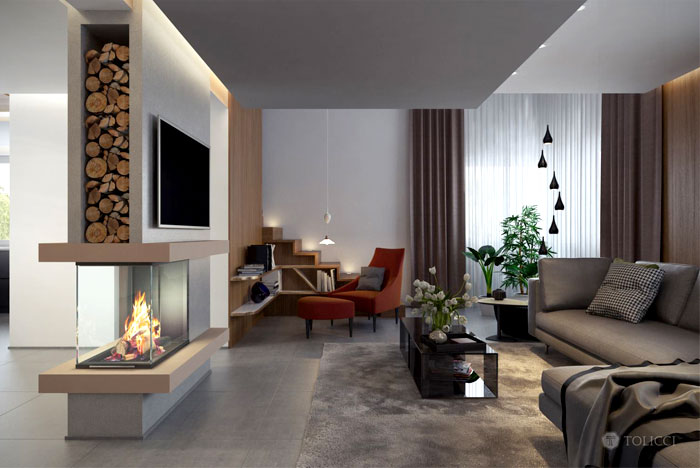 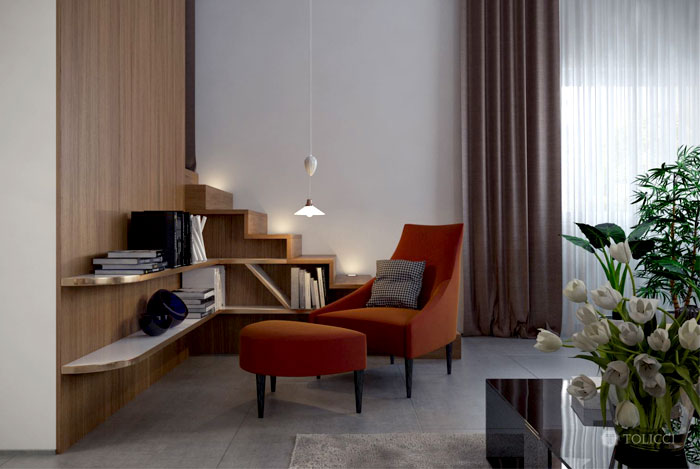 The dominant feature of the room became the fireplace, which, because it is triangular, connects the dining room with a living room. The LCD TV found it’s placed above the fireplace. The living room is a space with the largest building intervention – through hardening bearing structures we managed to open and link the spaces. The biggest intervention was the cancelation of the stairs in the hallway; we transferred it to the living room and therefore the entrance to the upper floor has changed its position. Moving the staircase has created for us the perfect scene for the incorporation of an atypical feature in the form of library, which is build into the stairway and continues on the wall. The creation of a reading corner was one of the requirements of our client. We added to the corner a comfortable armchair with ottoman. The specific feature of the area is the historic lamp, which was already in the house, before the renovation. The client didn´t believe that we can find a place for it in the new design, where it could stand out. As is our tradition, as well as in whole design of the house, also here we were able to bring the gold component into the space in the form of the front edge of the shelves of the library.

In the living room, we added a sofa in the shade of gray, so the color is matching with the chosen flooring and carpet. The high-pile carpet and its reflections create an interesting visual feature in the interior. We deliberately chose the coffee table in the smoked glass shade. By this way, we got into the space the reflections and the game of lights, which are reflected from the glass surfaces of the table. The clients wanted to bring their favorite images of Egyptian themes to a new space. It was very important, that we created an adequate space for them. We found a space on a hanging console of concrete decor, which is located on the wall paneled with walnut wood. It is this feature that connects the living room with the hallway. This wall is going around to the corner where it’s part of the corridor. 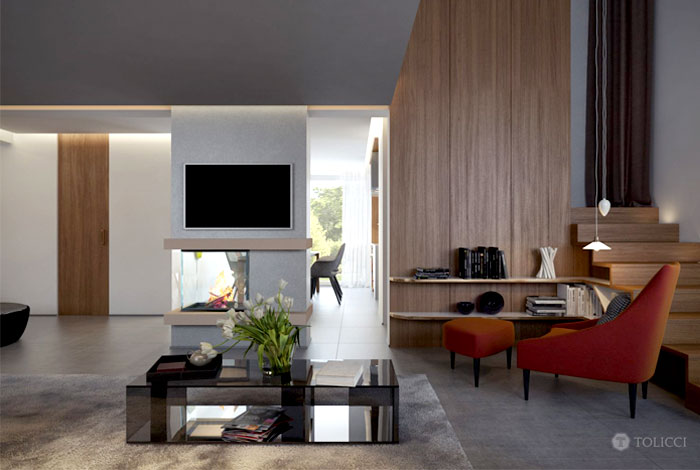 We have also unusually approached the creation of seating in case of large numbers of guests. We diagonally placed two big poufs in the space, one of which became the connecting link between the living room and the hallway. Second pouf has its place to the left of the seat. Together they create nice separate places in space that we have supported by lowered lights, which by its upward layout mimics the shape of a spiral. We also added coffee tables to the poufs, which support their separate position and functionality. If needed, these poufs can be attached to the sofa and thus ensuring a comfortable seating for all guests.

The whole design of the house is characterized by warm tones of the wood and shades of green and gold color; these color accents are balanced with gray color of the floor and furnishing features. We highlighted the overall atmosphere and uniqueness of the space by very trendy retro patterns – in this case we chose black and white houndstooth pattern. 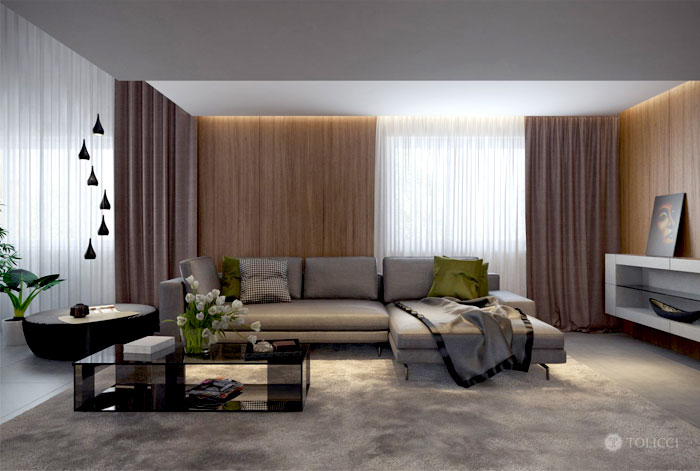 The total designed area primarily reflects the client’s requirements, but last not least also follows the latest trends and gives a clear style, which is in the spirit of creation by the Studio TOLICCI. 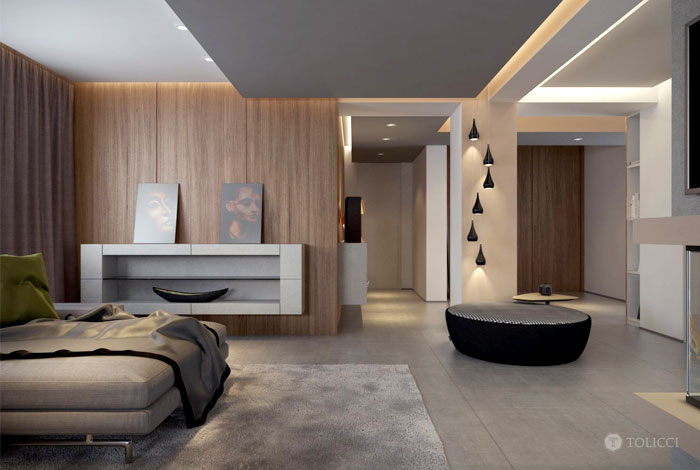